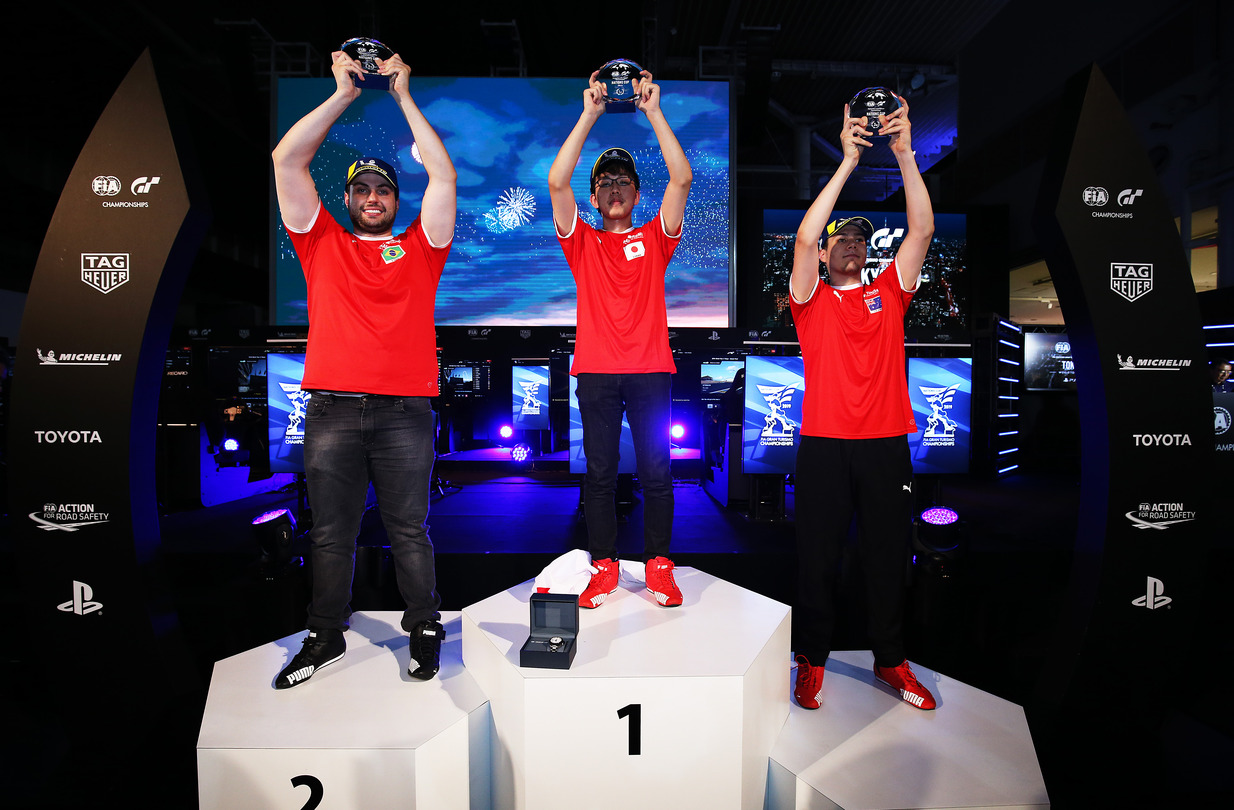 TOKYO, Japan (October 27, 2019) – With an enthusiastic capacity crowd cheering him on, Ryota Kokubun of Japan took the Nations Cup honours in the fifth Gran Turismo World Tour 2019 round today, part of the FIA Certified Gran Turismo Championships. Kokubun becomes the first Japanese player to stand atop the podium in 2019. After a weekend of intense, excitement-filled races—from the one-make GR Supra GT Cup to the Manufacturer Series exhibition race - the Nations Cup did not disappoint, as crowds filled the Mega Web Toyota City Showcase to watch the day’s events that included the Top 6 Qualifying, two Semi-final races, a Repechage and the Grand Final.

The Nations Cup format remained unchanged for Tokyo, as the top four finishers of the Semi-finals qualified for the Grand Final, while those in Positions 5 through 10 received another chance in the Repechage, where they needed to finish in the top four to advance. For everyone else, it was “sayonara, see you next year.”

For his win over 24 of the world’s top players, Kokubun secured his ticket to the World Finals in Monaco on November 23 and 24, where he will battle against this season’s other World Tour winners - Nicolás Rubilar of Chile, Igor Fraga of Brazil, and Mikail Hizal of Germany – as well as other players who have qualified through the Online Series.

Bizarre would be the only way to describe this first Semi-final heat. With a brilliant run in the Top 6 Qualifying, Japan’s Takuma Miyazono secured pole position for Semi-final A, a 12-lap contest around the tricky Sardegna Road Track-A course in the recently-introduced Jaguar Vision Gran Turismo, a beautiful-but-tricky 4-wheel-drive electric car with performance akin to an F1 racer. The drivers were required to use both medium- and hard-compound tyres for a minimum of two consecutive laps. 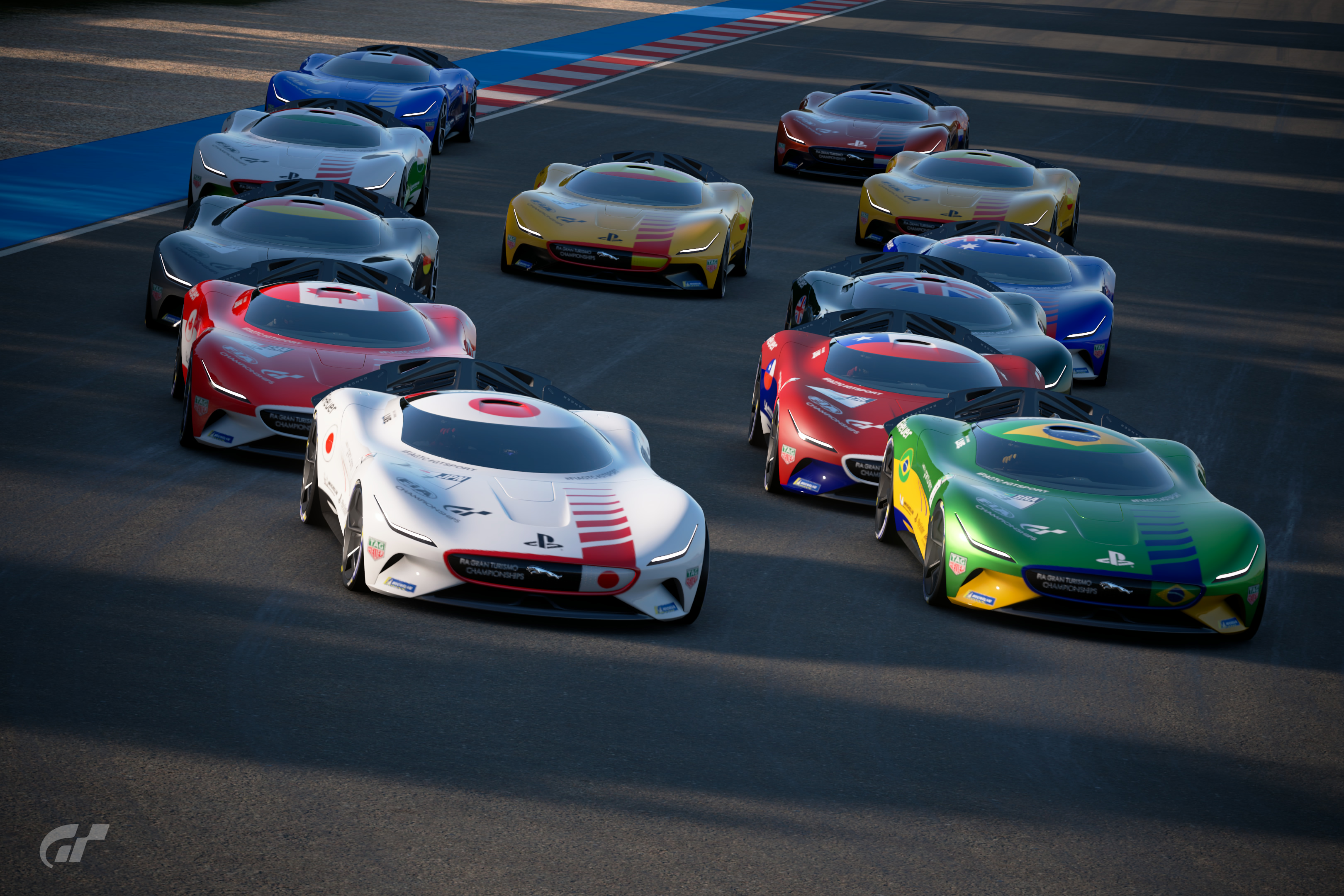 As soon as the green flag dropped, a caravan of cars swarmed the Turn 1 apex to get through the corner first, but Rick Kevelham of the Netherlands went in a bit too hard, ploughing the nose of his Jag into the back of Manuel Rodríguez’s (Spain) car. The impending chain-reaction resulted in a multi-car pileup that took out race-leader Miyazono and 2nd-place driver Adriano Carrazza (Brazil). Kevelham was immediately assessed a 10-sec. penalty, but the race stewards decided that such a major incident warranted a restart and issued the first-ever red flag in the FIA GT Championships.

After the cars lined up in their original grid positions—except for Kevelham who was sent to the back of the field for instigating the mishap—the green flag dropped a second time, immediately prompting yet another all-out scramble into Turn 1. It was clear from the beginning that Miyazono was not comfortable in the Jaguar VGT, going wide for the first corner and dropping way back to 5th. Taking the lead was Carrazza, with Andrew Brooks of Canada and Nicolás Rubilar of Chile in hot pursuit. 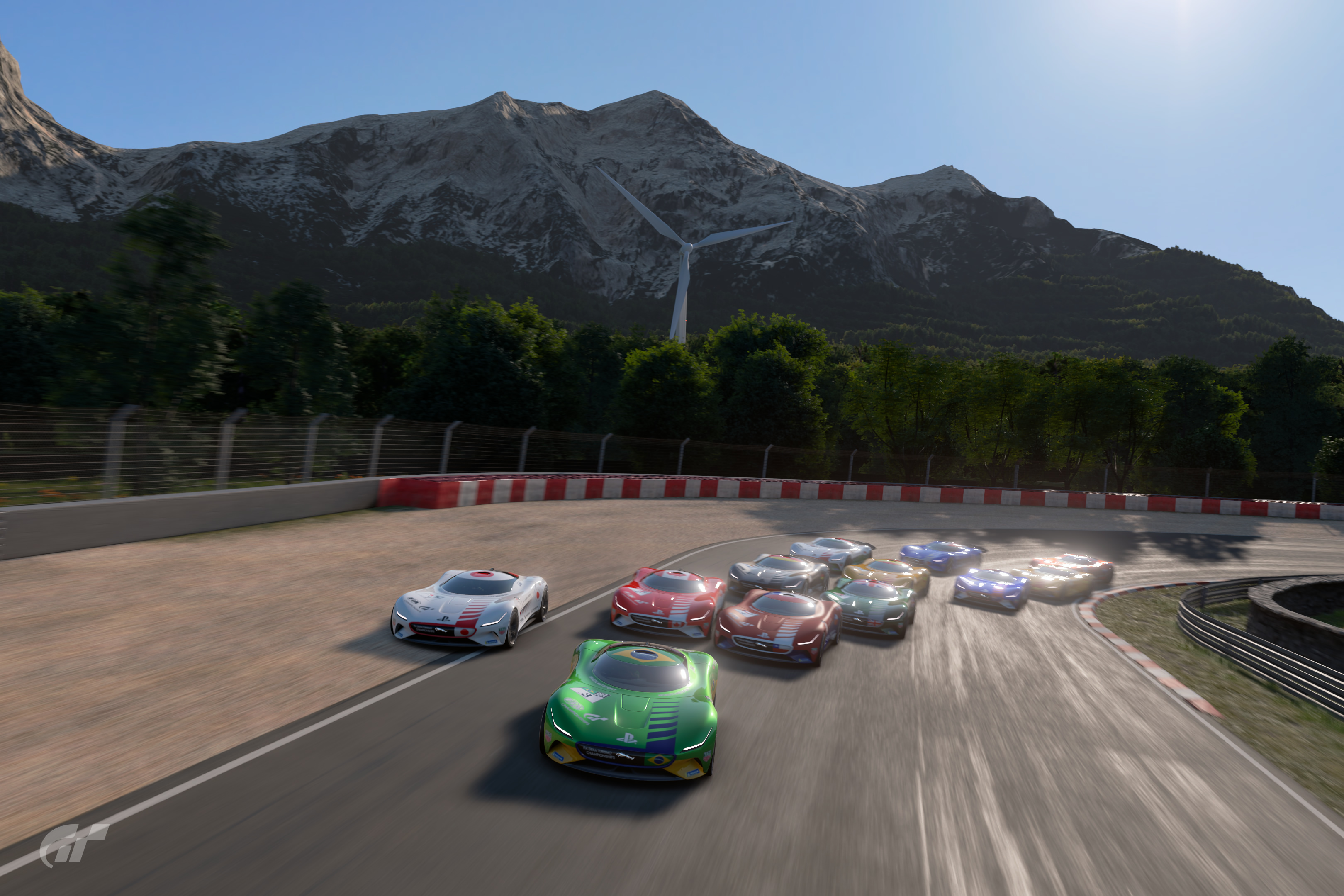 Later on, still during the opening lap, Rubilar went wide through Turn 9, ramming the wall and then returning to the track, only to disrupt the path of several other cars, including that of Brooks, who spun and dropped to the bottom of the pack. Carrazza and Spain’s Coque López, who started in 8th place, managed to avoid the mess and get away in positions 1-2. 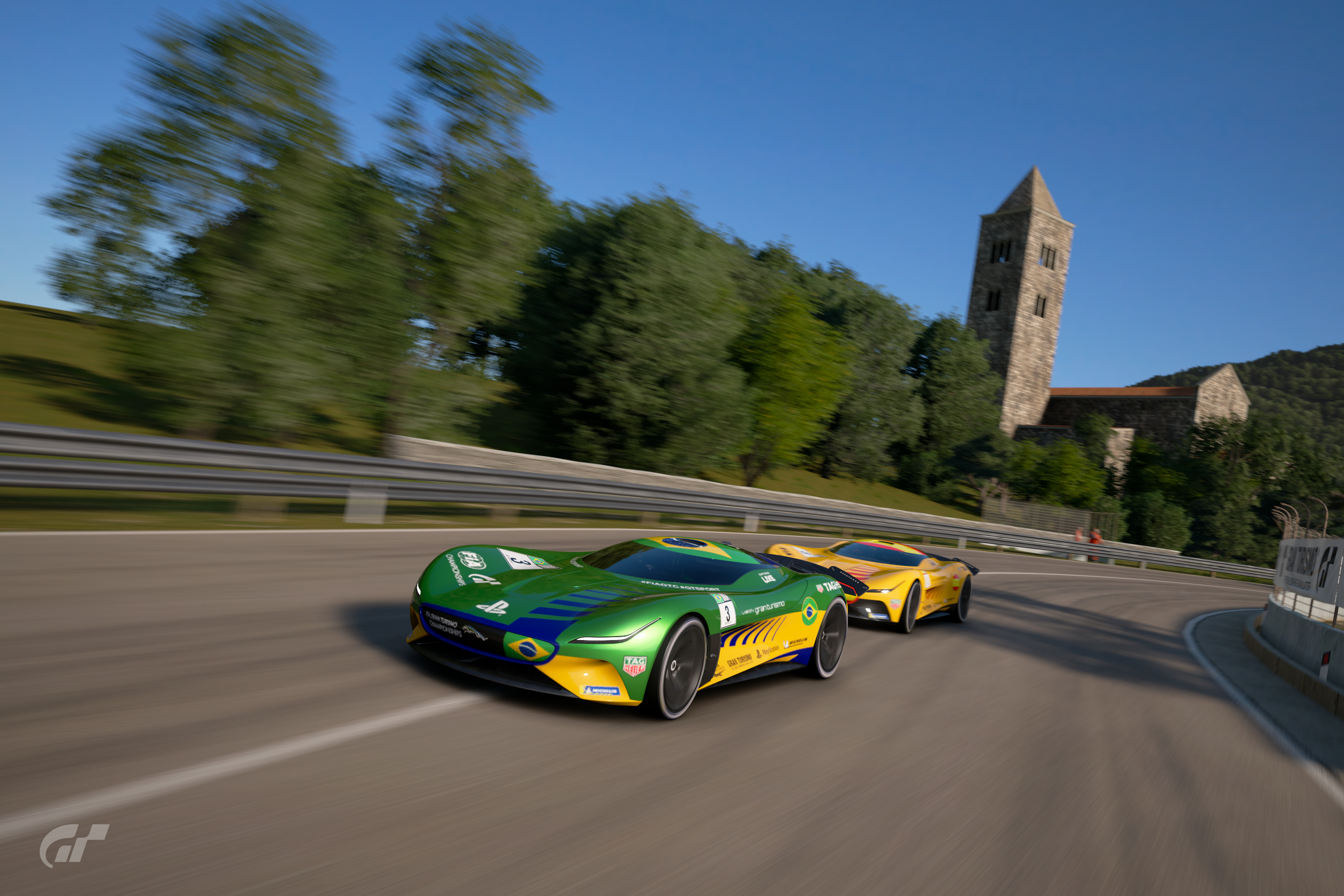 The action did not let up on the second lap, as an intense battle for 3rd place broke out. With Miyazono, Adam Wilk of Australia, and Rodríguez bunched up and bouncing against each other like bumper cars (but going 200 mph!). As they battled for position, Carrazza and López opened up a 5-second lead on the rest of the field.

At the start of Lap 6, the halfway point of the race, the running order was Carrazza, López, Rubilar, and Miyazono, but the Japanese driver soon gave up his position when he dived into the pits to change to the required hard-compound tyres. Then, the race leaders followed on Lap 8, also going to the slower hard-compound rubber. While Miyazono fought his way back up to 4th, he was overtaken by Adam Suswillo of the UK, who was now running on the quicker medium-compound tyres.

The final two laps saw López climbing all over the back of Carrazza’s Jag VGT, desperately looking for an opportunity to get by, but the Brazilian showed the tenacity of a pit bull, holding the Spaniard off to the very end. Rubilar showed why he was already a Monaco qualifier with a brilliant pass of Wilk to grab 3rd place. As for the hometown favorite Miyazono, it was off to the Repechage, as he ended up in 5th place unable to catch Wilk.

The second Semi-final contest would prove to be somewhat tame compared to Semi-final A, despite being held in extremely wet conditions on the Circuit de Spa-Francorchamps. Making things even more challenging for drivers in the 7-lap contest was the assigned racecar: the rear-engine Porsche 911 RSR. 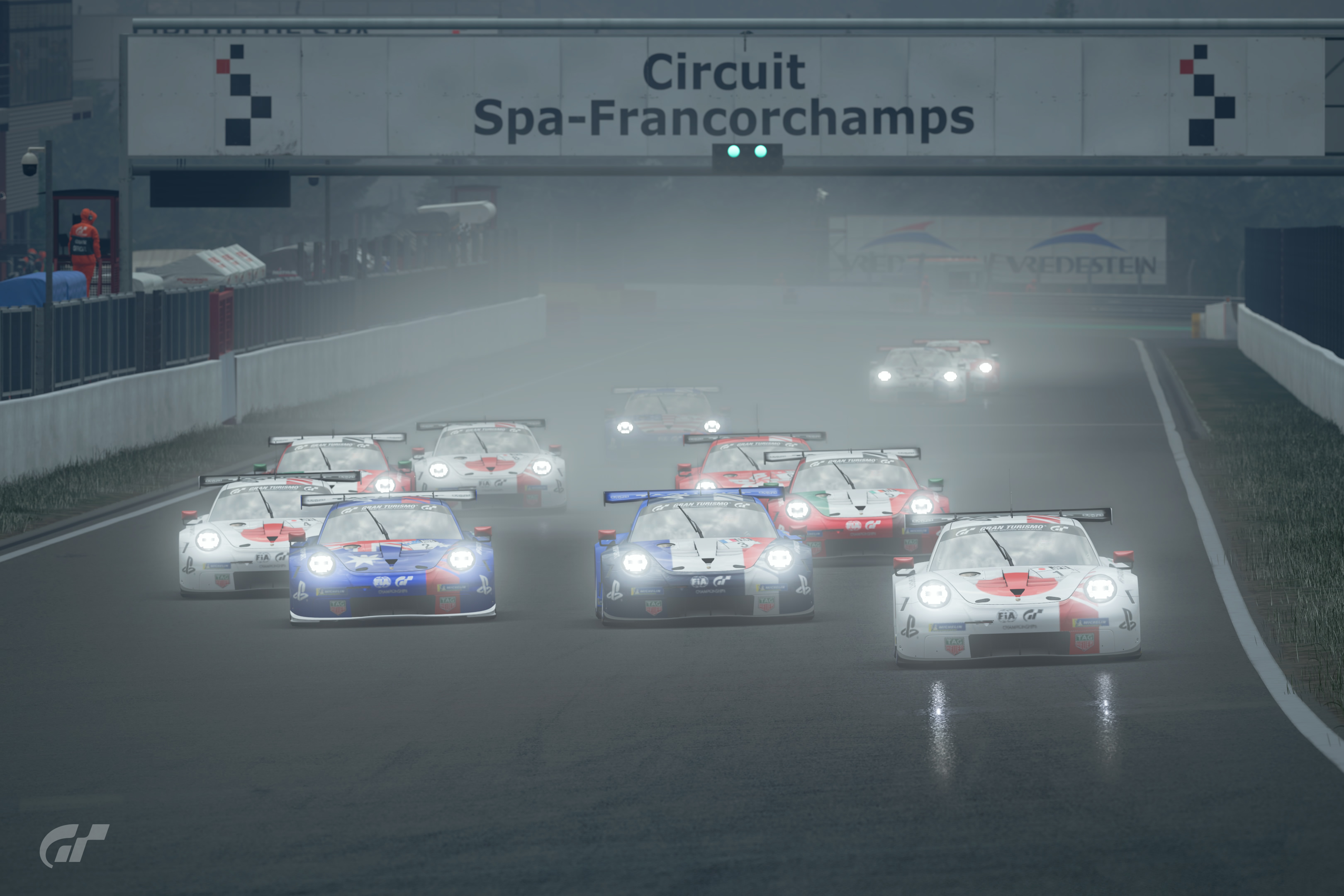 The huge crowd held their respective breaths as the green flag dropped, with pole-sitter Ryota Kokubun of Japan leading the field through Turn 1. Because all the cars were on wet tyres, no pit stops would be necessary for this race.

During the opening stages of the race, Kin Long Li of Hong Kong briefly lost control of his car, touching Kevan Pounder of the USA and ultimately sending Italian Salvatore Maraglino off the track. For the mishap, Li was assessed a 2-sec. penalty, essentially knocking him out of contention. So, at the end of Lap 1, the running order was Kokubun, Cody Nikola Latkovski of Australia, Rayan Derrouiche of France, and Japan’s Tomoaki Yamanaka. 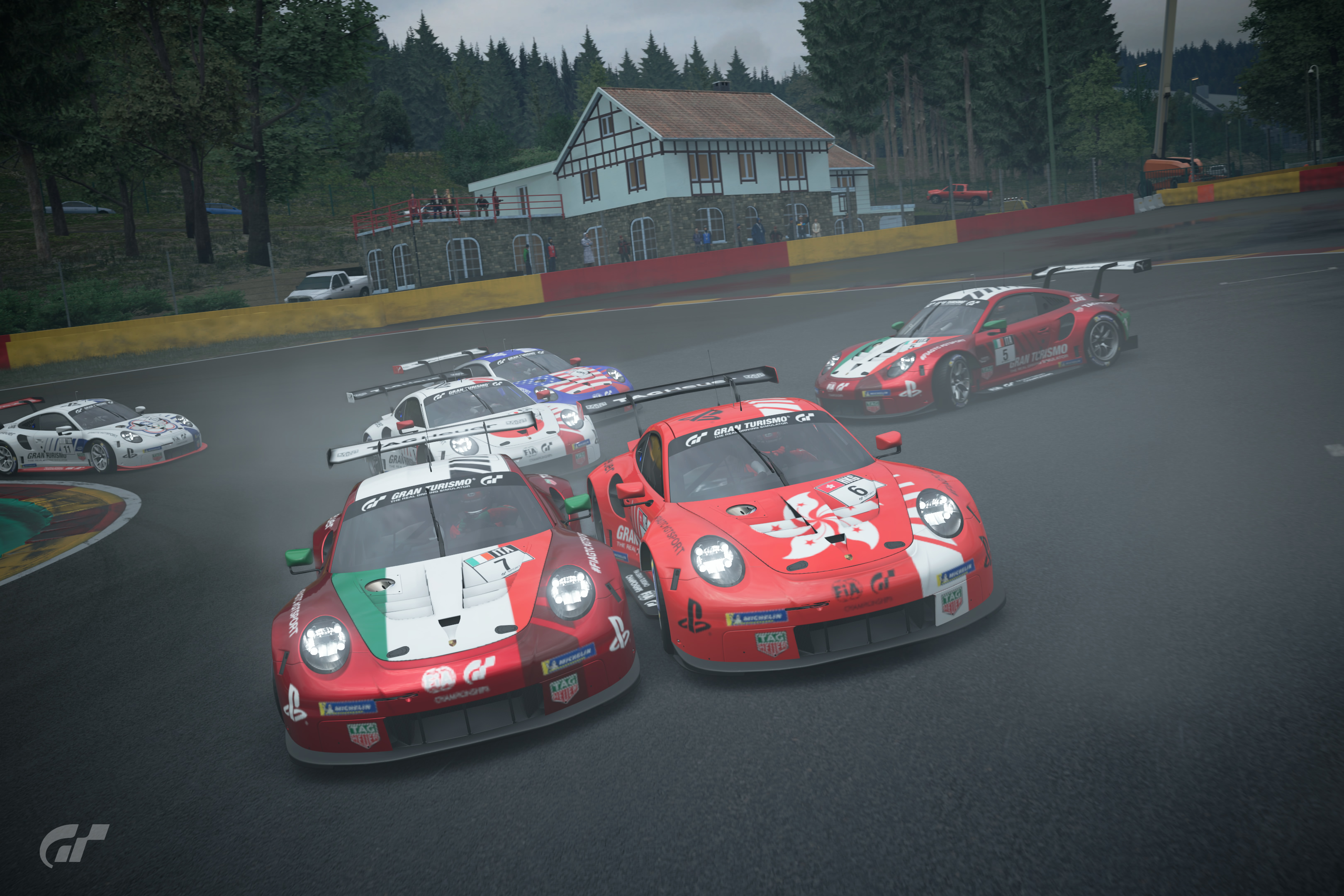 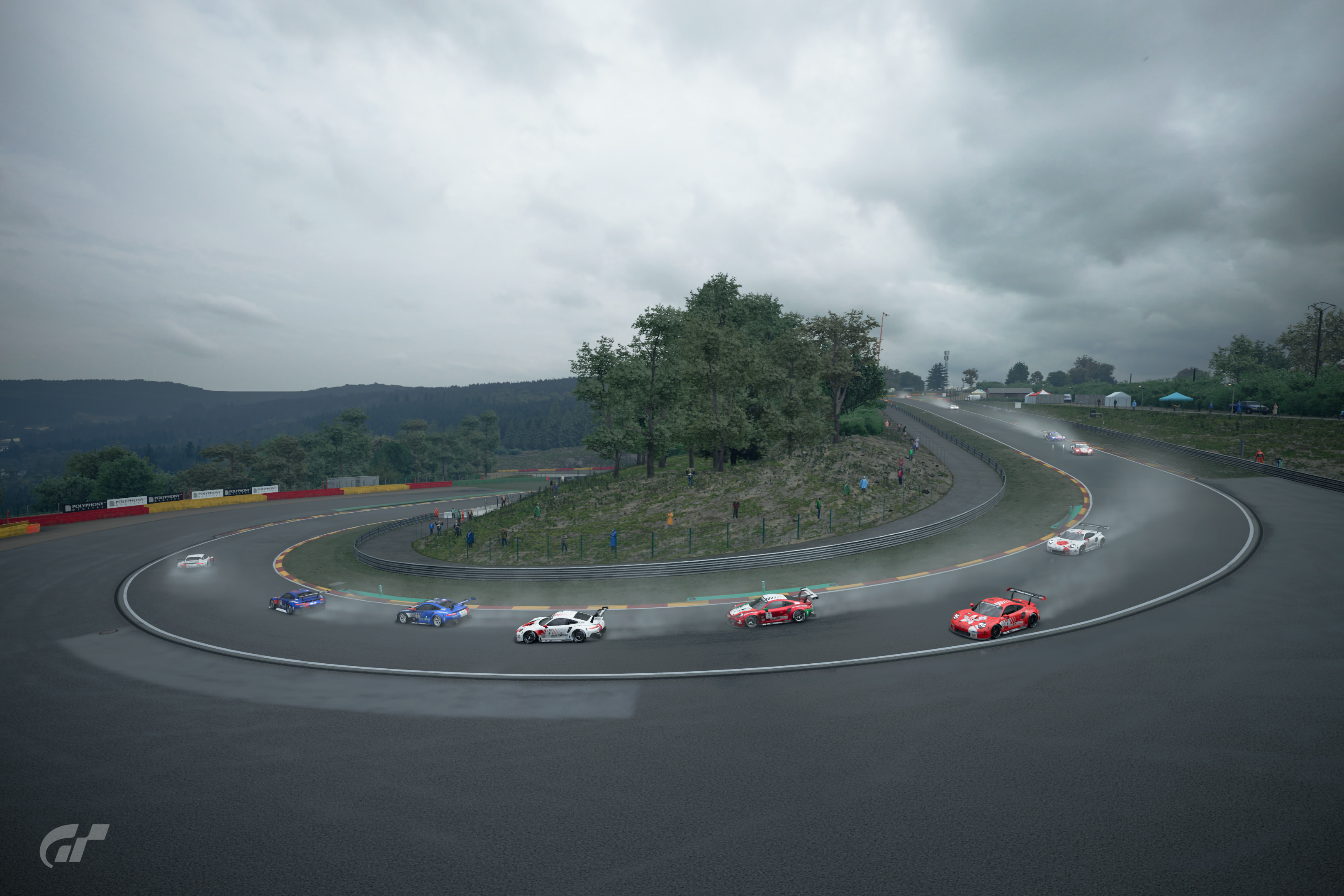 Latkovski looked to get around Kokubun on Lap 4, but slightly went off the track, earning him a 0.5-sec penalty. This made Latkovski rethink his strategy and exercise patience, waiting for an opportunity to present itself instead of forcing the action.

Lap 6 saw Giorgio Mangano of Italy make a brilliant pass through Les Combes—Turn 7, 8, and 9—to take the all-important 4th position away from Yamanaka (Japan). By this time, the top three drivers had opened up a 4.5-second lead over the field, with Latkovski stuck to the rear bumper of Kokubun’s car looking for any opportunity to get by. However, the Japanese driver kept his cool and brilliantly held off the hard-charging Australian to take the chequered flag. Derrouiche maintained a steady pace to finish 3rd, while Mangano grabbed 4th for the final automatic pass to the Grand Final. 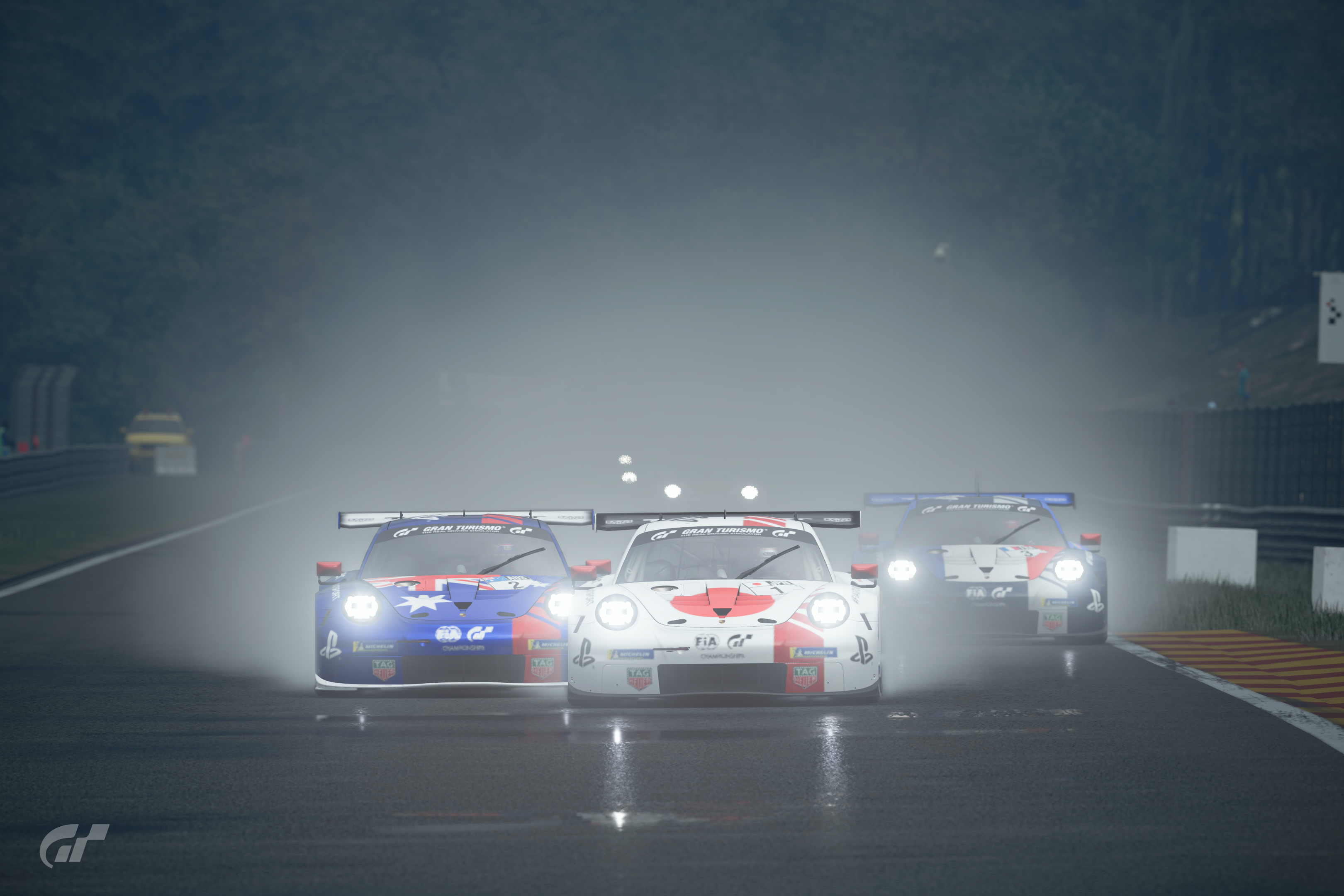 The Repechage is usually a scrappy contest where the drivers, all desperate not to be eliminated, leave everything on the track. For the Tokyo Nations Cup Repechage, the drivers assigned N500-class cars for a 6-lap sprint around the Tokyo Expressway South Inner Loop at night. 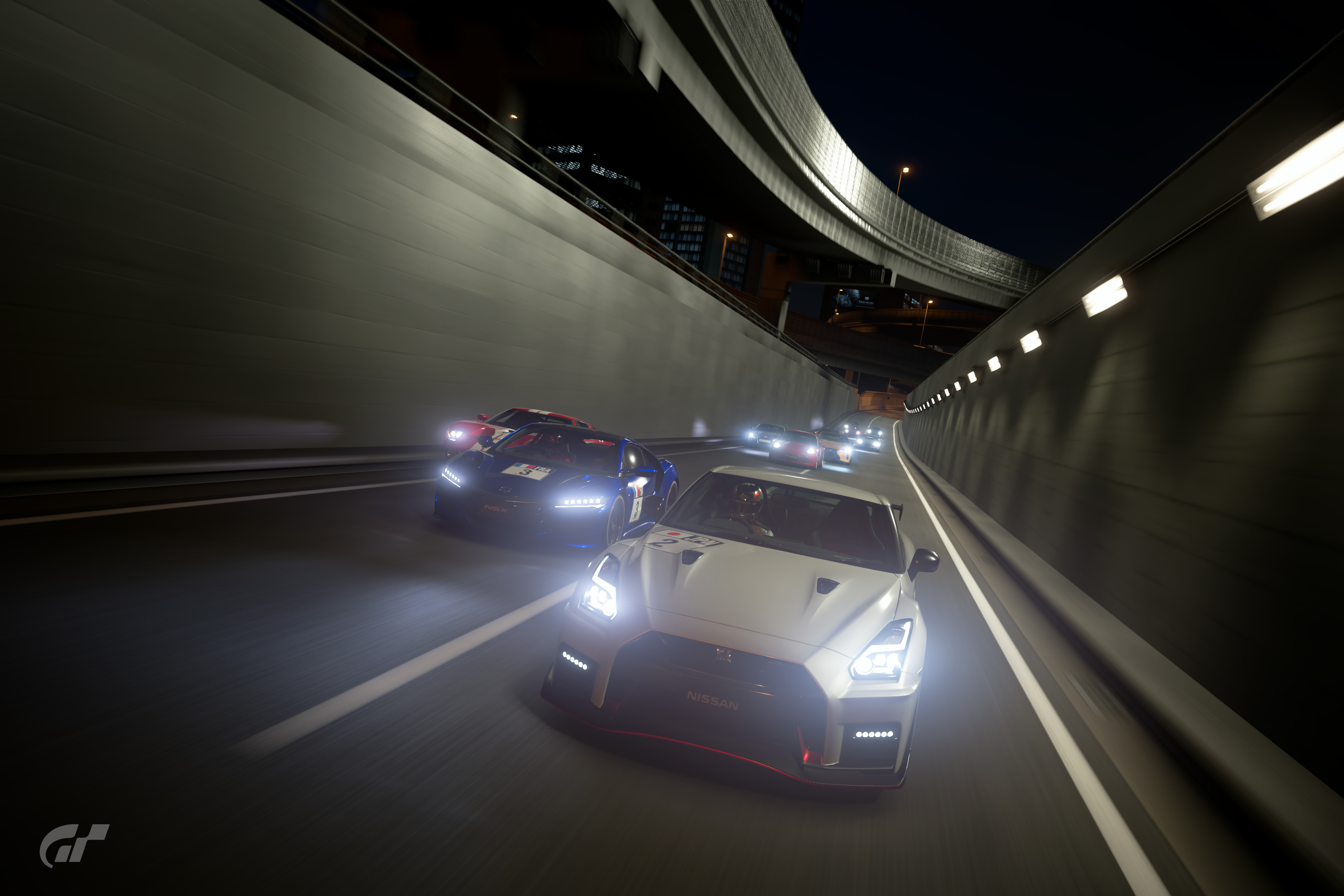 The pole-sitter Miyazono led the field in his Lamborghini Huracán, as the cars behind him bumped and scrubbed each other for position on the narrow street circuit. Yamanaka, whose Nissan GT-R NISMO started in 2nd, dropped back one position, but then charged hard through the middle of the track to take P1 away from Miyazono. This lit a fire under Miyazono as he took the lead right back on Lap 2 and cruised to an easy win after opening up a 2-second cushion over the field.

Yamanaka, on the other hand, lost his rhythm after being passed by Miyazono and was eventually caught and passed by France’s Baptiste Beauvois (Honda NSX), Maraglino’s Porsche 911 GT3, and the Lexus LC 500 of Rodríguez, dropping to 5th and out of the tournament.

The Grand Final was an 8-lap contest around the legendary Le Mans circuit with the drivers piloting, of all things, Formula F1500 race cars. Only in Gran Turismo Sport can you see and experience formula race cars on the Circuit de la Sarthe, as these pure-bred race machines touched 240 mph (390 km/h) on the Mulsanne Straight! 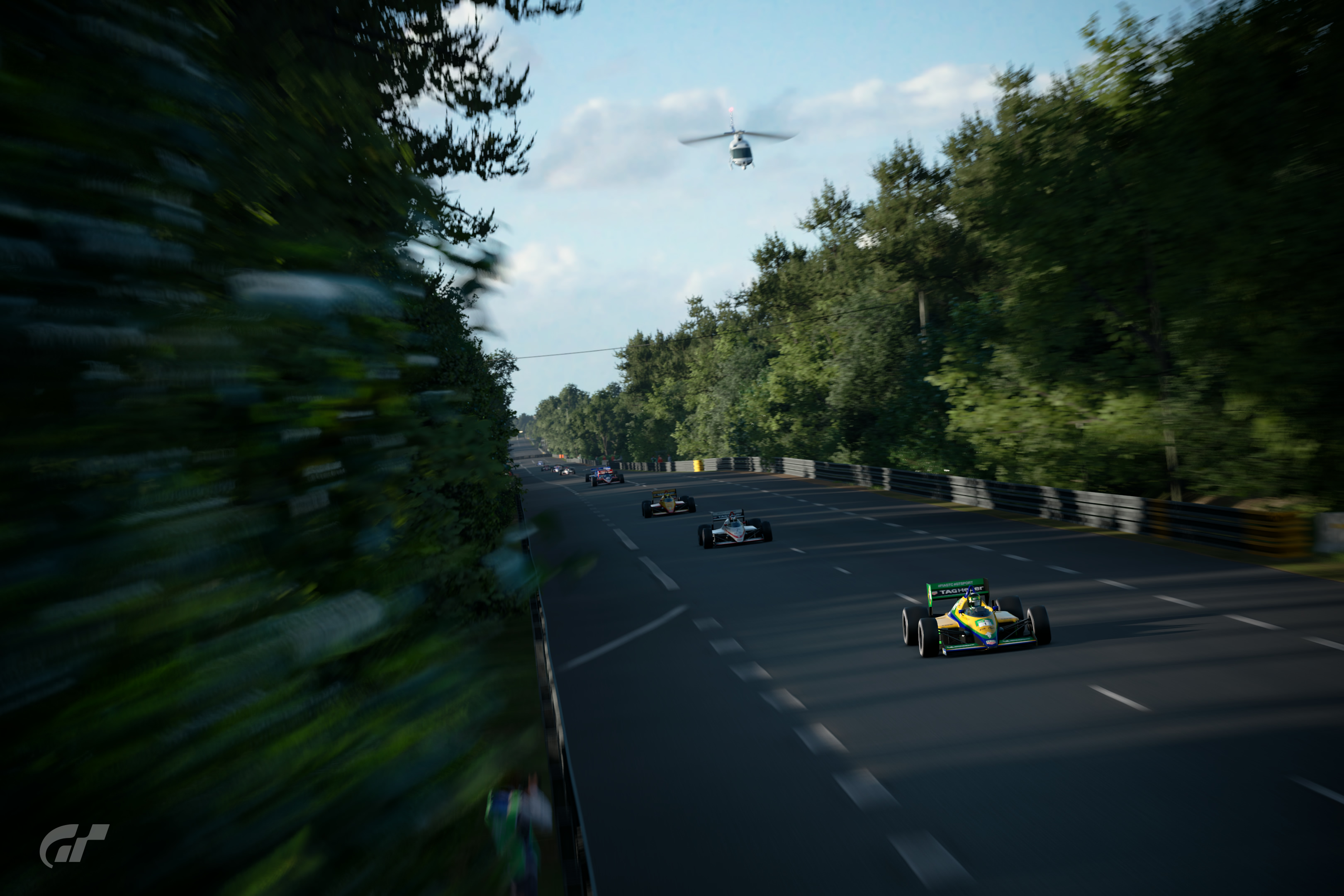 The air was filled with electricity as the capacity crowd loudly showed their support for their hometown heroes, one of which was Ryota Kokubun who started from the No. 2 position behind pole-sitter Adriano Carrazza of Brazil.

The race featured a standing-start format, the first ever for a World Tour Final. Every car got away cleanly, as Takuma Miyazono, who started the race in 9th place, immediately got past two cars to claim 7th. His fellow countryman, Kokubun, then made a brilliant pass on Carrazza to take the race lead midway through Lap 1, but it was short-lived as the Japanese driver made a terrible driving error through the Esses, hitting the guardrail and letting Carrazza and 3rd-place driver, Spain’s Coque López, get past. 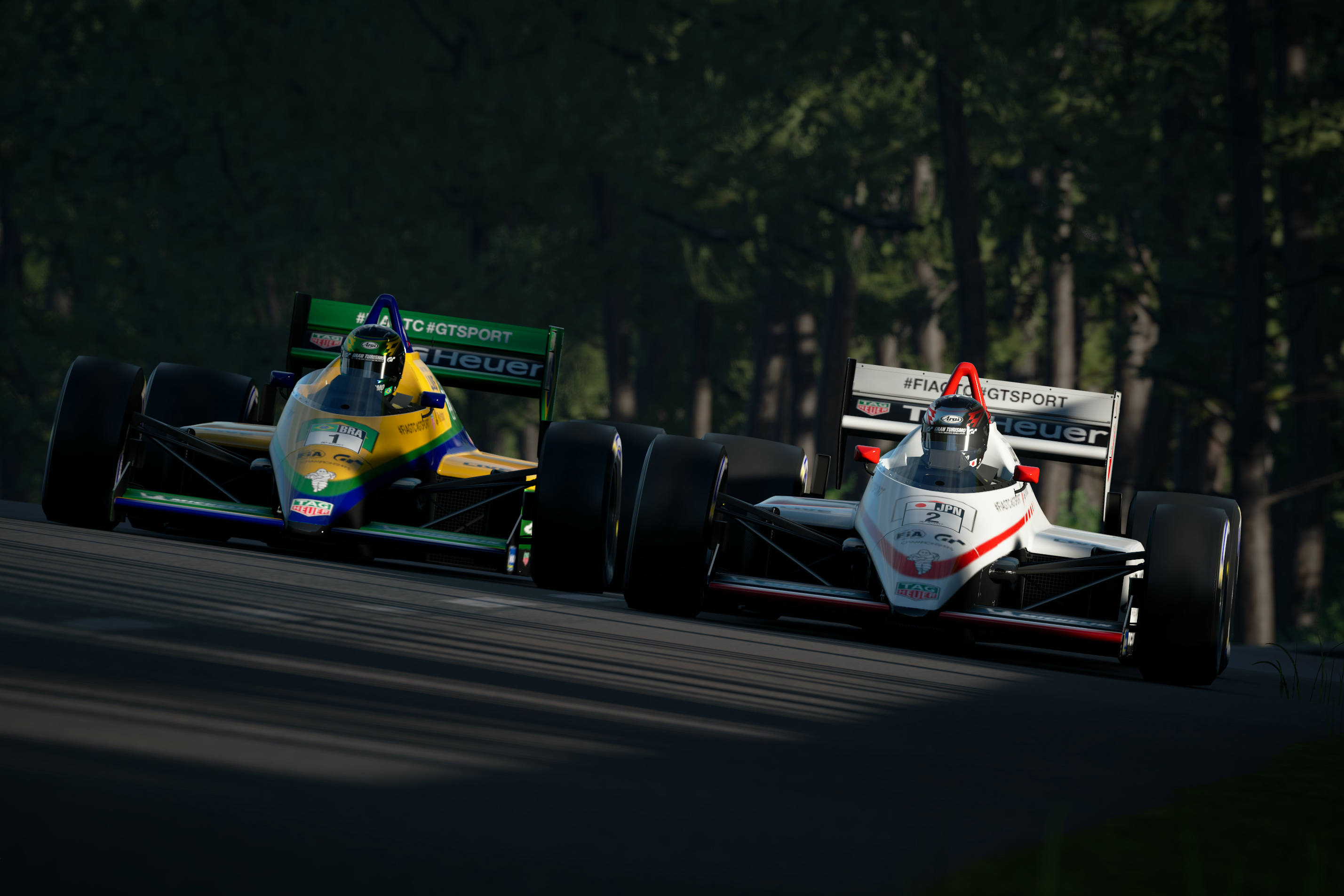 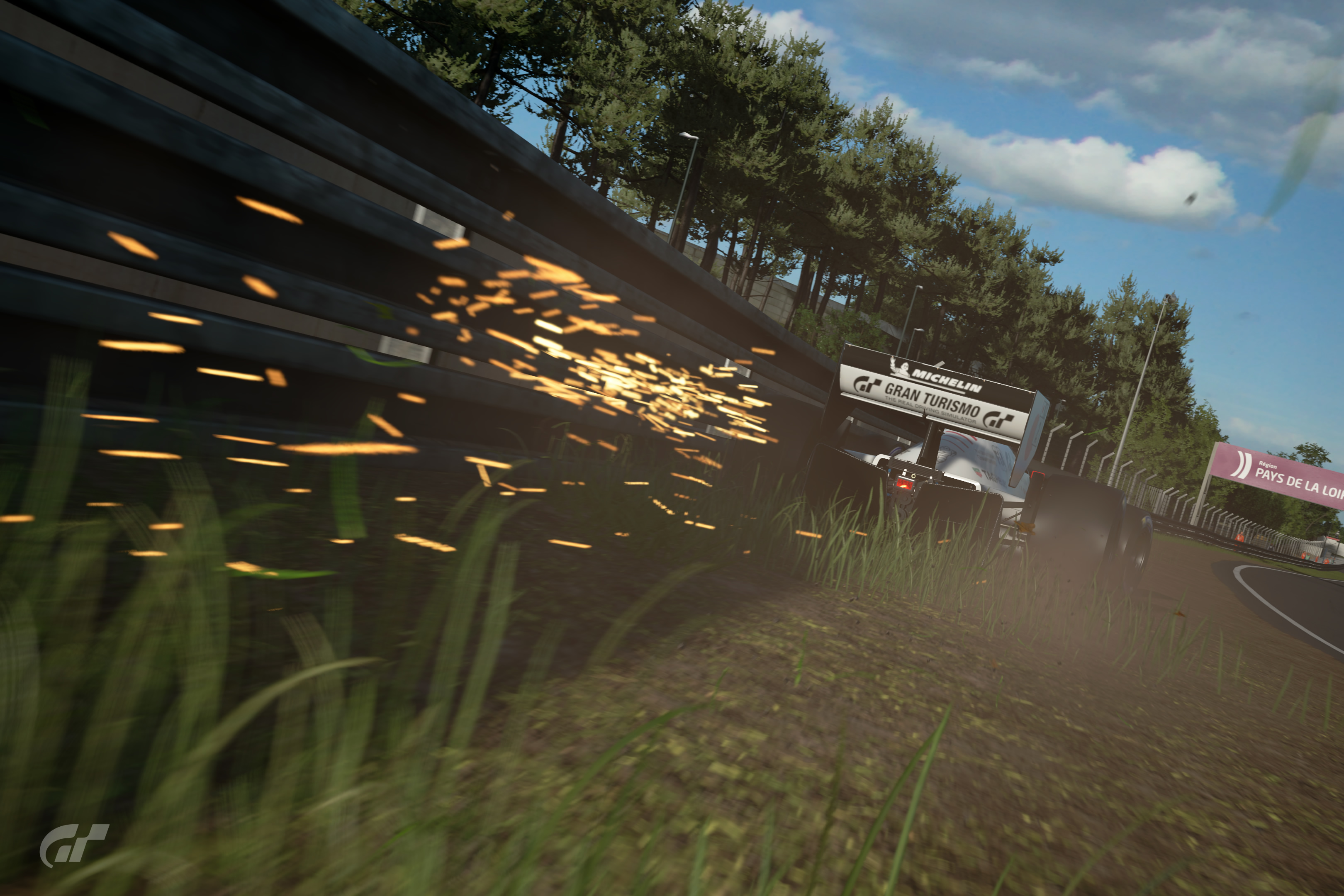 Crafty as ever, Miyazono pitted early (on Lap 2) after seeing that the race leaders started on the fast, soft-compound tyres. He chose to change from mediums to the hard-compound rubber, saving the softs for the end of the race. It was a risky move, but one well worth taking, considering his low position. The following lap saw Kokubun and Lopez pit, both going to medium-compound tyres, while Latkovski came in to take on the hards, saving his softs for the end of the race like Miyazono. Meanwhile, race leader Carrazza chose to stay out and squeeze as many laps with the soft tyres as possible, hoping to build an insurmountable lead. It sort of worked because when the Brazilian pitted on the next lap to change to medium-compound tyres, he came back out 1.5-seconds ahead of Kokubun, maintaining his lead, as Lopez, Rubilar, and Latkovski rounded out the top five. 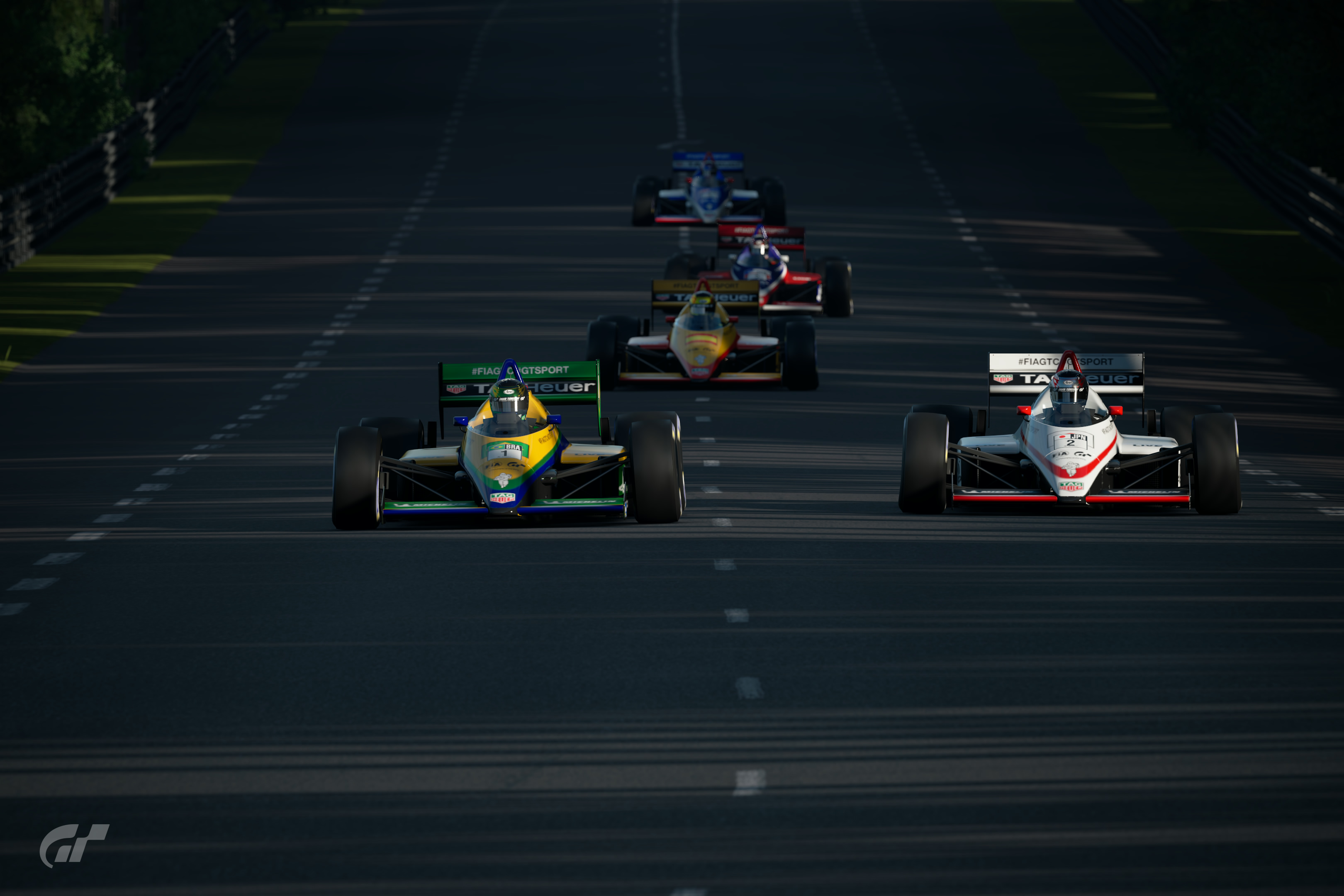 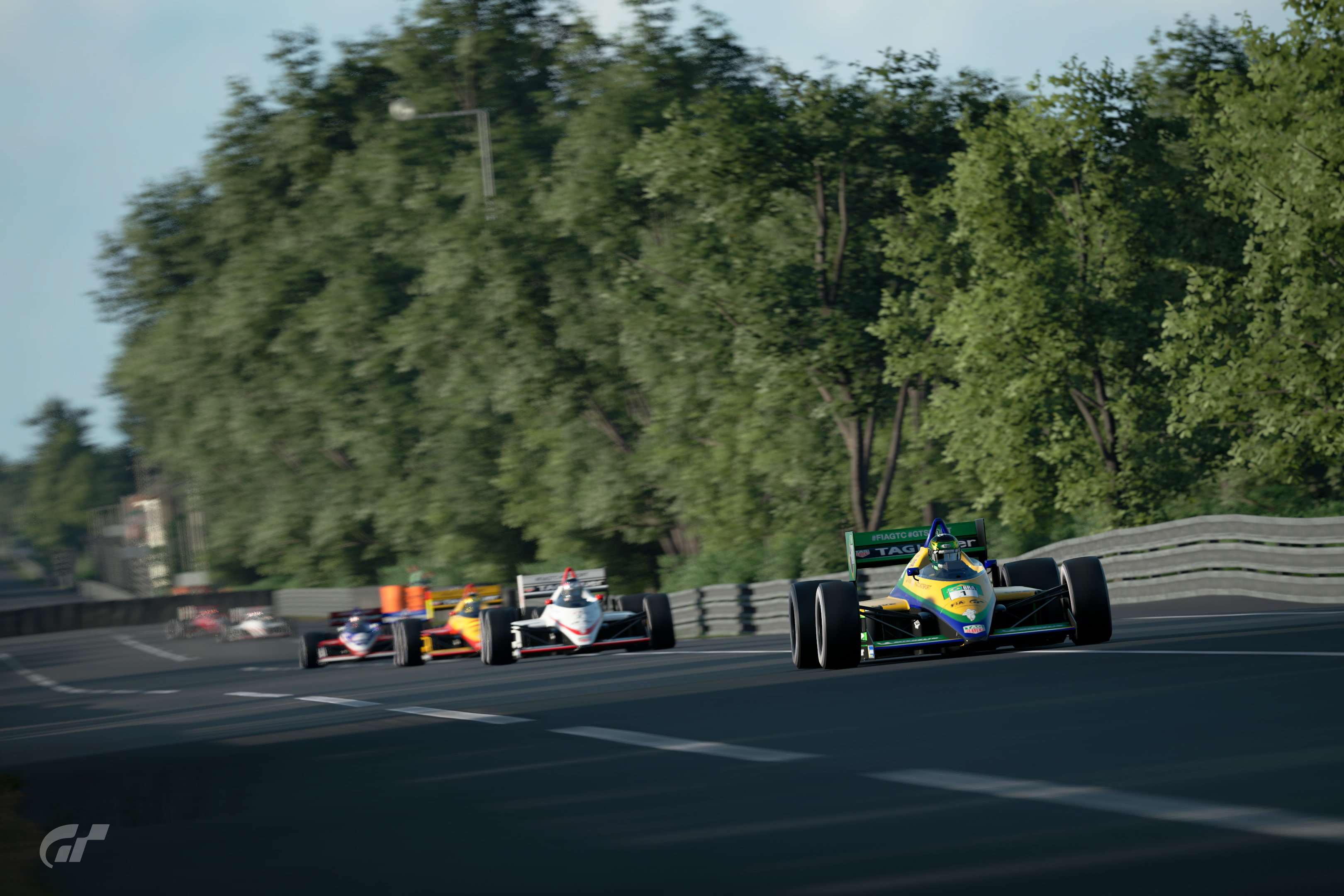 The top three started pulling away from the pack, with the P3 car of López creating a huge 11-second cushion over 4th-place Rubilar. Just when you thought it was going to be a three-horse race, things changed in a hurry after the top three drivers made their final pit stops, all switching to the mandatory hard-compound tyres.

Lap 7 saw Latkovski and Miyazono, who were both on the softs, start taking chunks of time out of the lead. The question was: Did they have enough time left to catch Carrazza, Kokubun, and López?

Halfway into Lap 7, Latkovski caught López, with the constant pressure causing the Spaniard to hit the guardrail and give up 3rd-place. And then came Miyazono, who charged harder than a raging bull. The Japanese saw an opening through the Ford Chicane and passed both López and Latkovski, eliciting a huge cheer from the crowd. But it would prove to be too little too late for the Japanese driver, as Carrazza and Kokubun were now too far out of range. 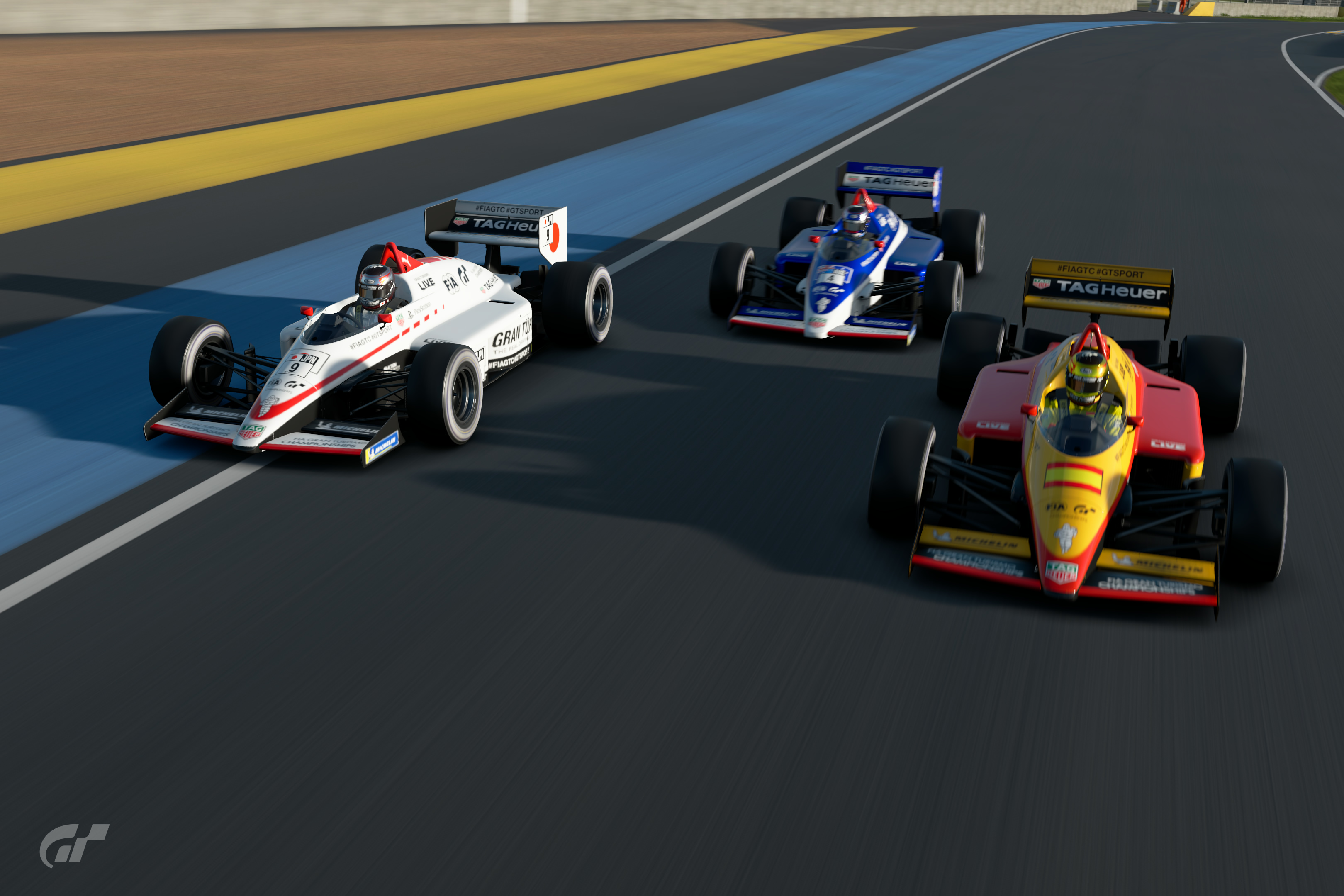 Later, during the same lap, race leader Carrazza made a mental error that ultimately cost him the championship. He went off track and got slapped with a 0.5-second penalty, which allowed Kokubun to pass him on the Mulsanne Straight to claim the overall lead. It was now a two-car battle with Carrazza climbing all over the back of Kokubun’s rear wing, looking for any opening to get by, but Kokubun kept his poise and held off the Brazilian to claim the chequered flag, becoming the first Japanese player in 2019 to win a Nations Cup event. Latkovski reclaimed 3rd place from Miyazono, who exhausted the grip of his tyres, while López rounded out the top five.

Along with the big win, Kokubun took home the Michelin Driver of the Day award. He said after the race: “I never imagined I could win, but I felt good during the Semi-finals and wanted to keep that momentum going all the way through. But winning the Grand Final was a miracle, so I’m really happy. I’ve had some disappointing outings in the past, and it made me practise harder than ever. I think today was a result of that. I now hope to keep this momentum going all the way to the Finals in Monaco.”