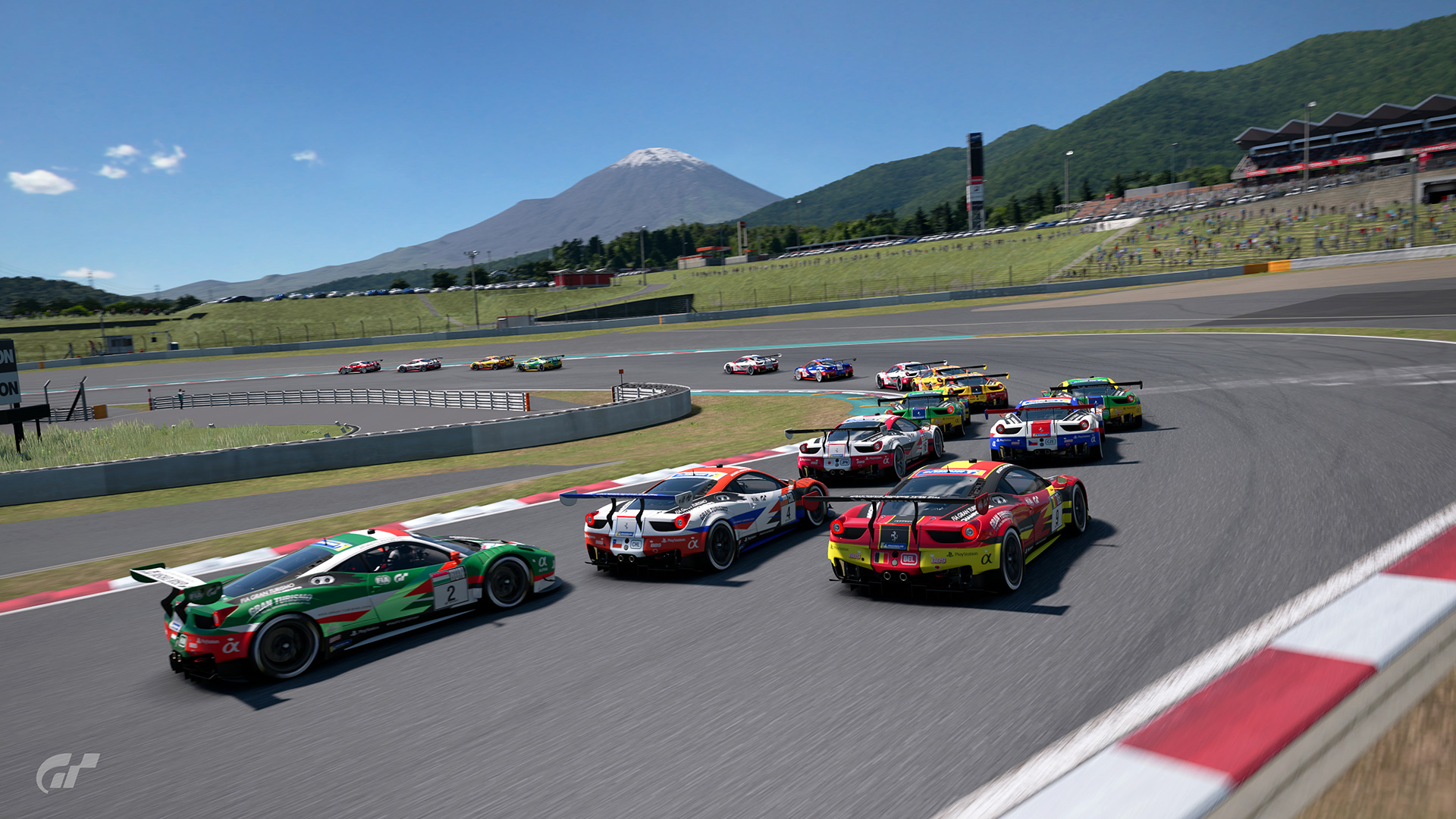 Tokyo, Japan (14 November, 2021) – As the FIA Certified Gran Turismo Championships 2021 Series Nations Cup nears its climax, Italy’s Valerio Gallo has put himself in the proverbial driver’s seat after winning two out of the three rounds so far and a strong 2nd-place finish at the World Series Showdown. While the field is filled with incredibly talented drivers—such as Spain’s Jose Serrano, Igor Fraga of Brazil and Japan’s Takuma Miyazono, to name but a few—Gallo has shown that he’s in a league by himself this year, also taking the spoils in the Olympic Virtual Series event. Looking to keep his momentum going into the World Finals next month, Gallo has the others scratching their collective heads on how to best him. Plenty of intrigue awaited as the Nations Cup championship visited Japan’s Fuji International Speedway, the home track to many of his rivals, including Takuma Miyazono, Tomoaki Yamanaka, Ryota Kokubun, and Kanata Kawakami.

There was no surprise seeing Valerio Gallo of Italy (Williams_BRacer) claim pole position for the Round 4 contest at Fuji International Speedway. Right behind him sat last year’s Nations Cup champion Takuma Miyazono of Japan (Kerokkuma_ej20), while 2018 champ Igor Fraga of Brazil (IOF_RACING17) and Spain’s Jose Serrano (PR1_JOSETE) occupied the second row. Less than four-hundredths of a second separated Positions 1 through 4, ensuring that this 18-lap contest was going to be an all-out war. Each driver was required to run at least one lap on both medium- and hard-compound tyres, but would have to start the race on a different compound than they used in qualifying. This resulted in the usual tyre-strategies not being in play as all the drivers opted to qualify on medium tyres and start the race on hards. 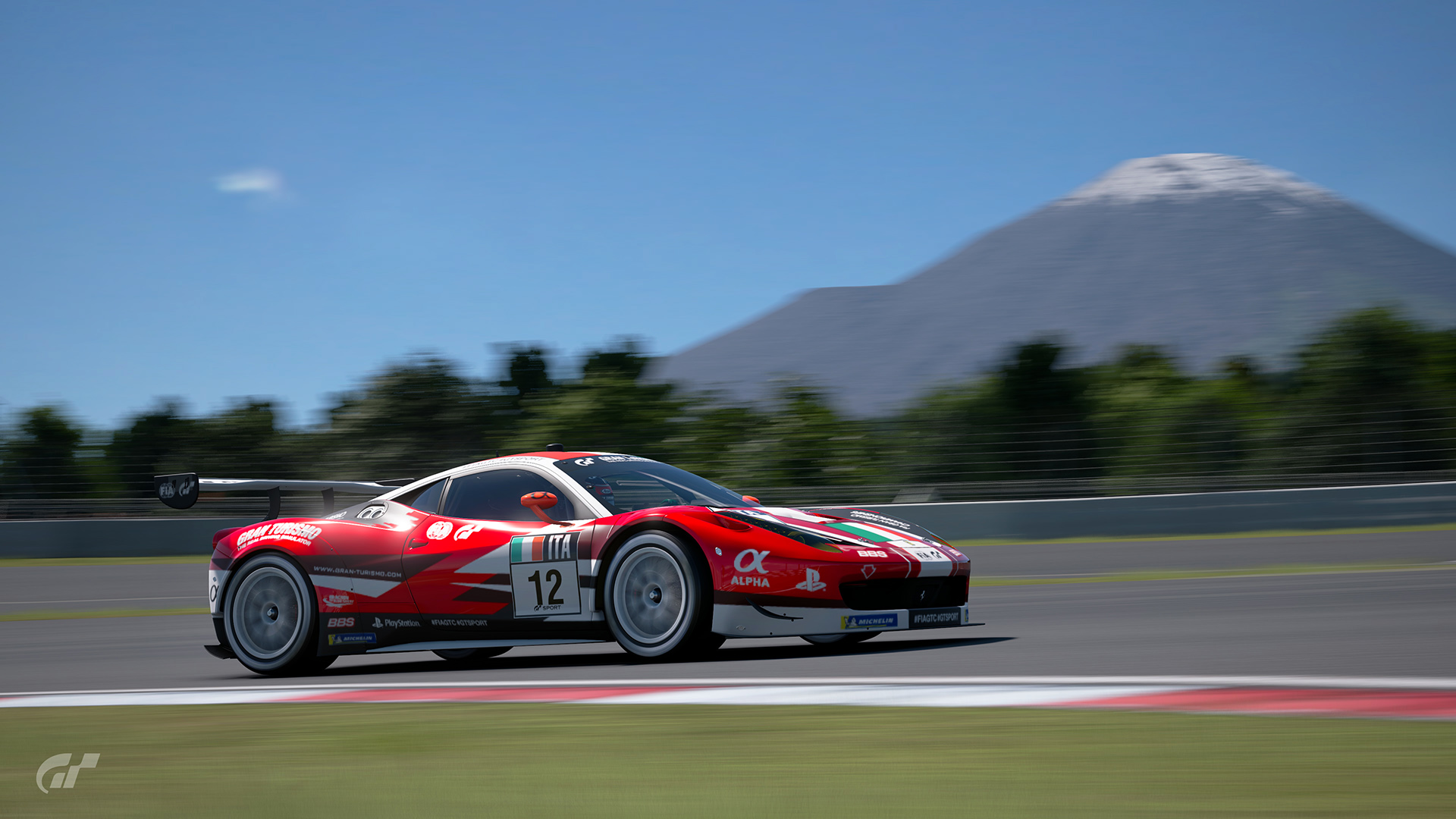 The action began as soon as the 16 brightly coloured Ferrari 468 Italia GT3s left the starting line. Miyazono made an aggressive move to pry the lead away from Gallo through Turn 1; however, the Italian kept his composure and maintained his line, not letting the Japanese driver through. Meanwhile, Serrano jumped all over Fraga, nabbing P3 away from the former champion. 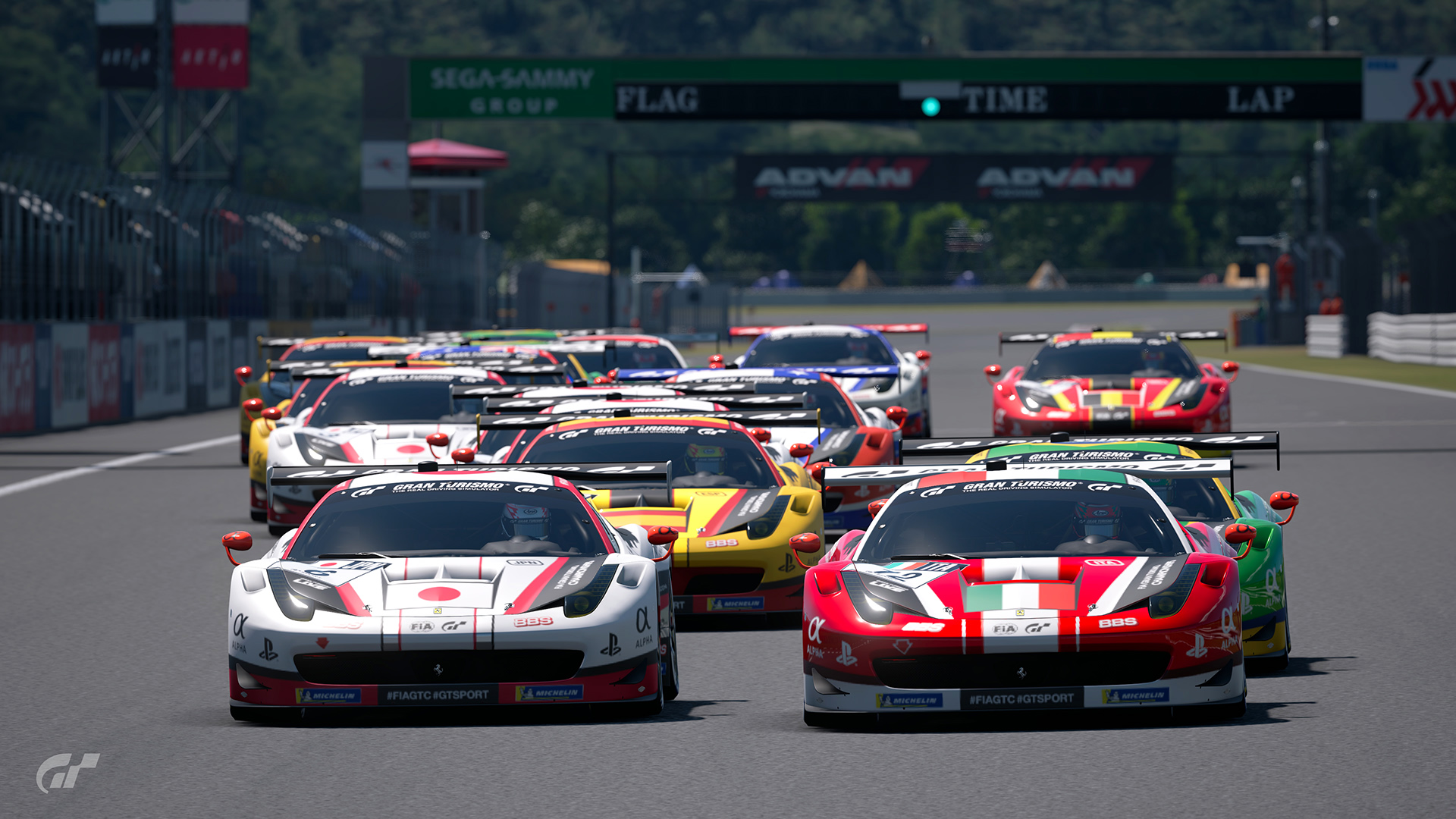 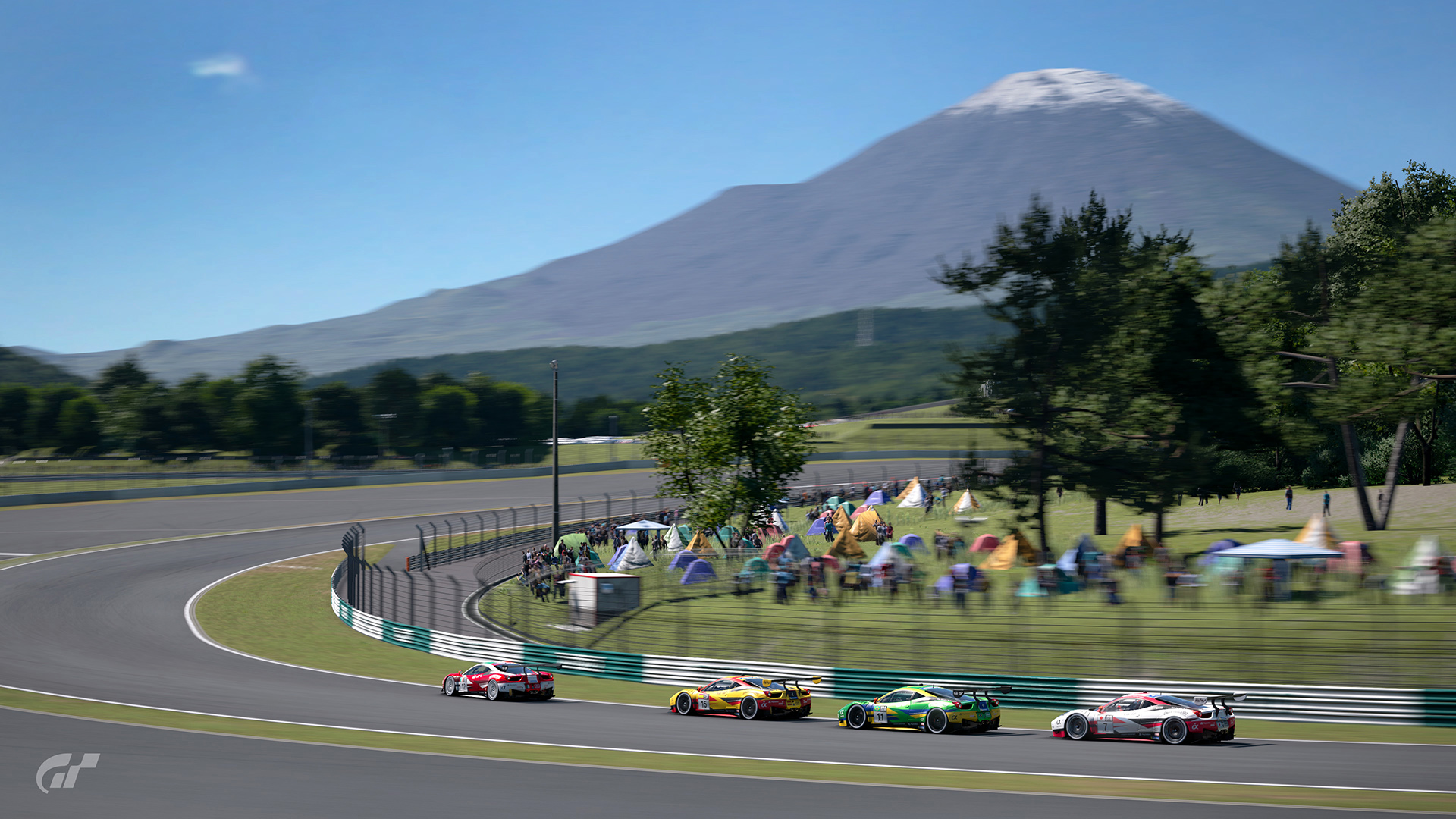 Heated battles broke out at the back of the pack too. Brazilian Adriano Carrazza (KoA_Didico15) was too late on the brakes into Turn 1 and the resulting carnage saw some high-profile casualties with Ryota Kokubun (Akagi_1942mi) and Quentin Jehoul (ERM_Quinten) dropping down the field. Australian Andrew Lee (PX7-AmazingHour) was catapulted up to 5th place and Lucas Lucas Bonelli of Brazil (TGT_BONELLI) improved from last on the grid to 9th on track. A few corners later, Carrazza was involved in another altercation that saw Spain’s Nicolas Romero (ERM_NicoRD) drop to the rear of the field. 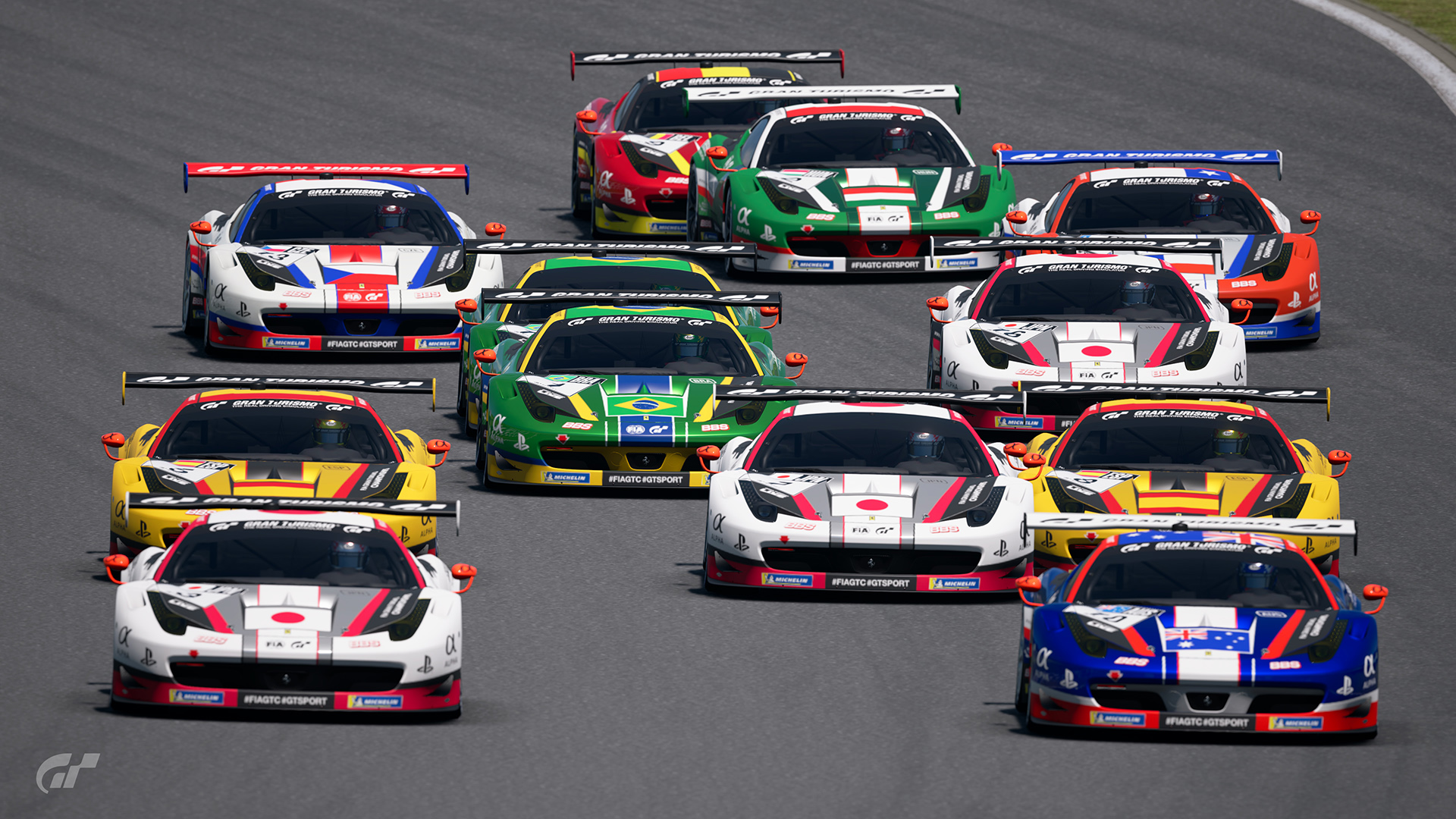 The second lap saw Miyazono successfully draft the red Ferrari of Gallo at 270 km/h and claim the lead going into Turn 1. By lap 3, the cars settled into formation as they navigated the tricky track with the majestic sight of Mt. Fuji looming in the background. Then disaster struck Miyazono on lap 4 when he drove over the kerb at the exit of the Coca-Cola Corner (Turn 3) causing his rear tyres to lose traction. His white Ferrari flew off the track and fell to 7th place, handing the lead back to Gallo. 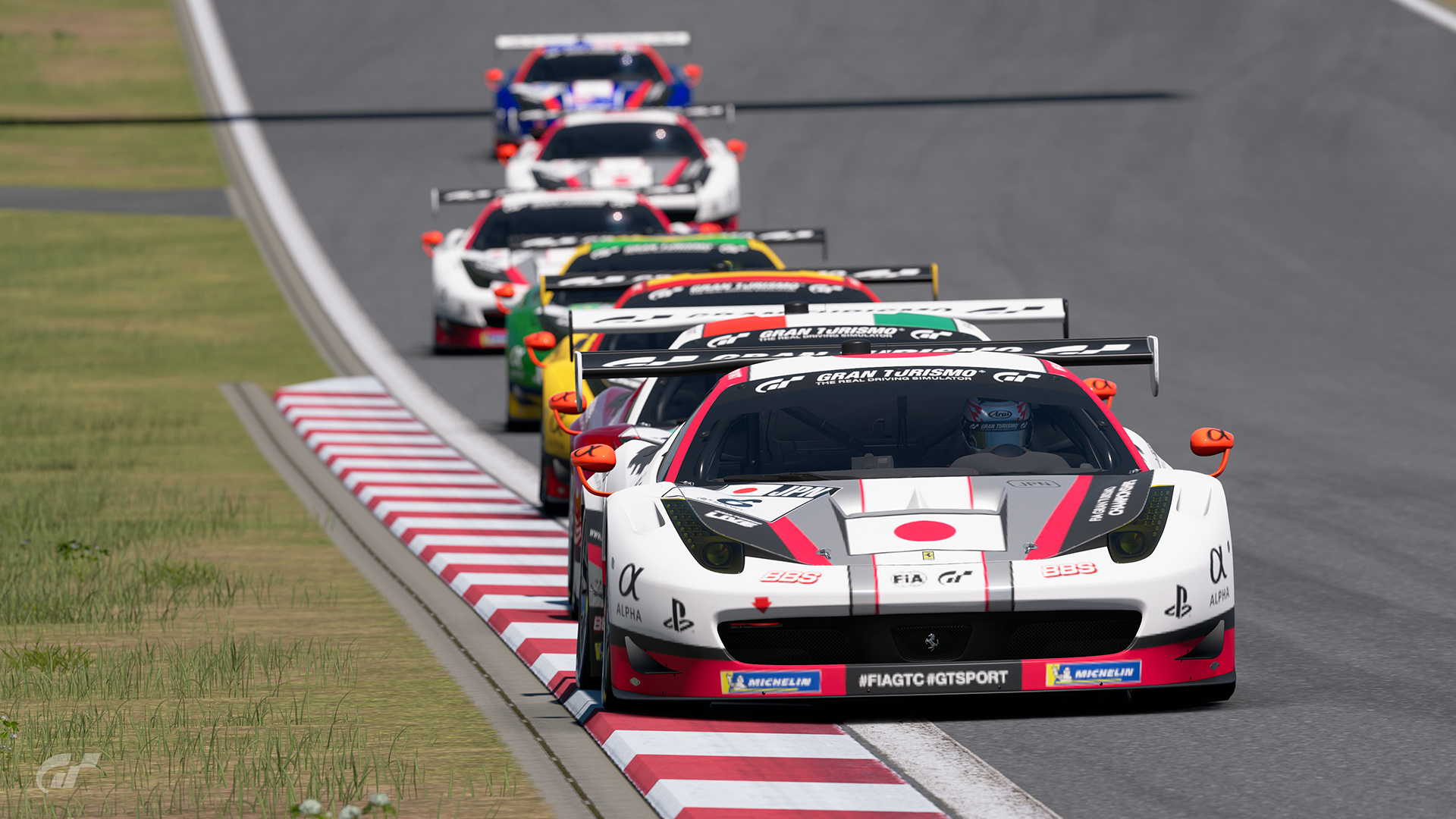 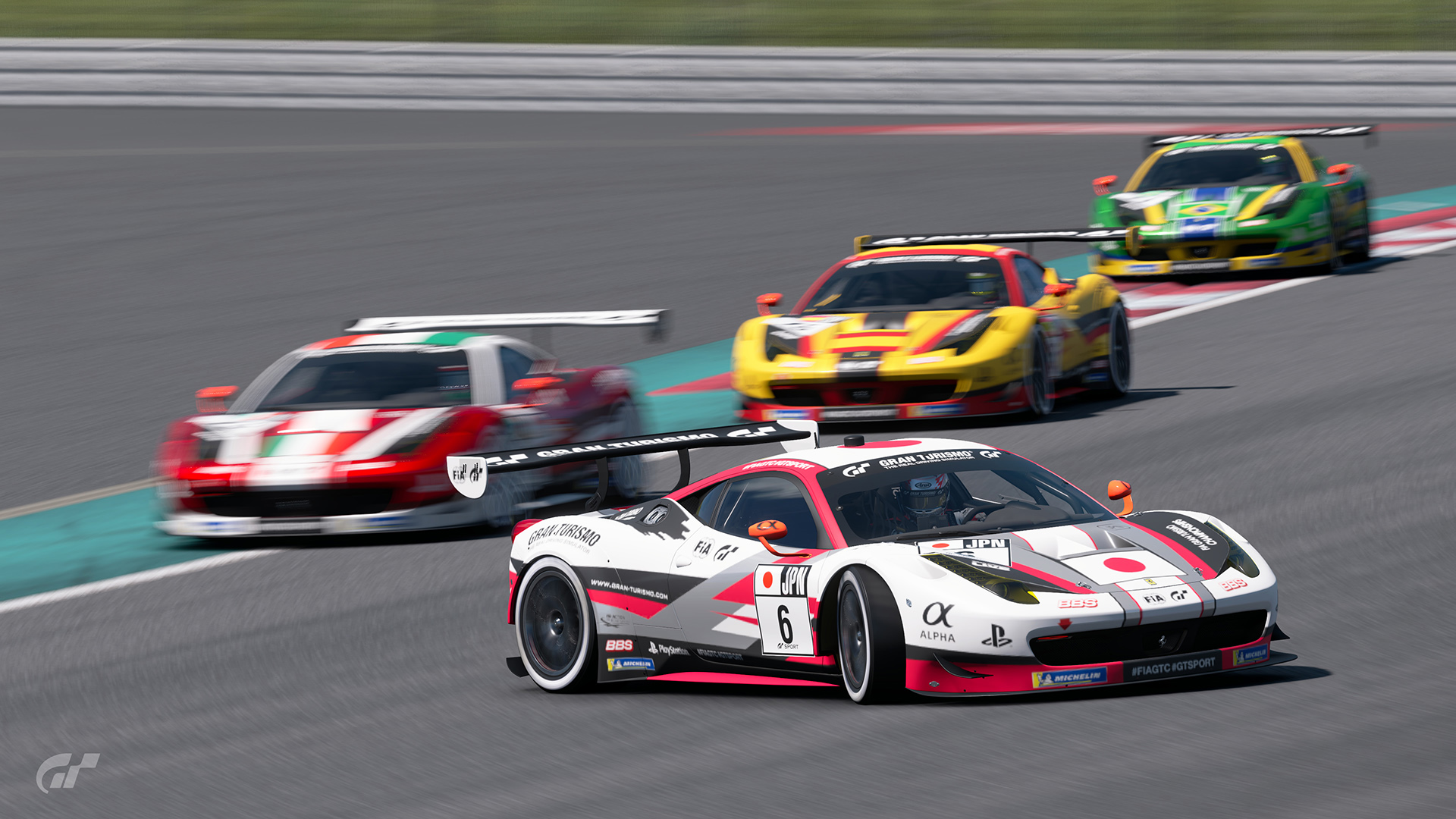 Lap 7 saw Serrano use Gallo’s slipstream to his advantage and take the race lead into the first corner. At this point in the race, only about three seconds separated the top six cars, magnifying the importance of employing a sound pit strategy. Meanwhile, a bit down the leaderboard, the Czech Republic’s Nikita Moysov (ERM_Nick), Romero and Bonelli were ferociously battling each other for 7th place. 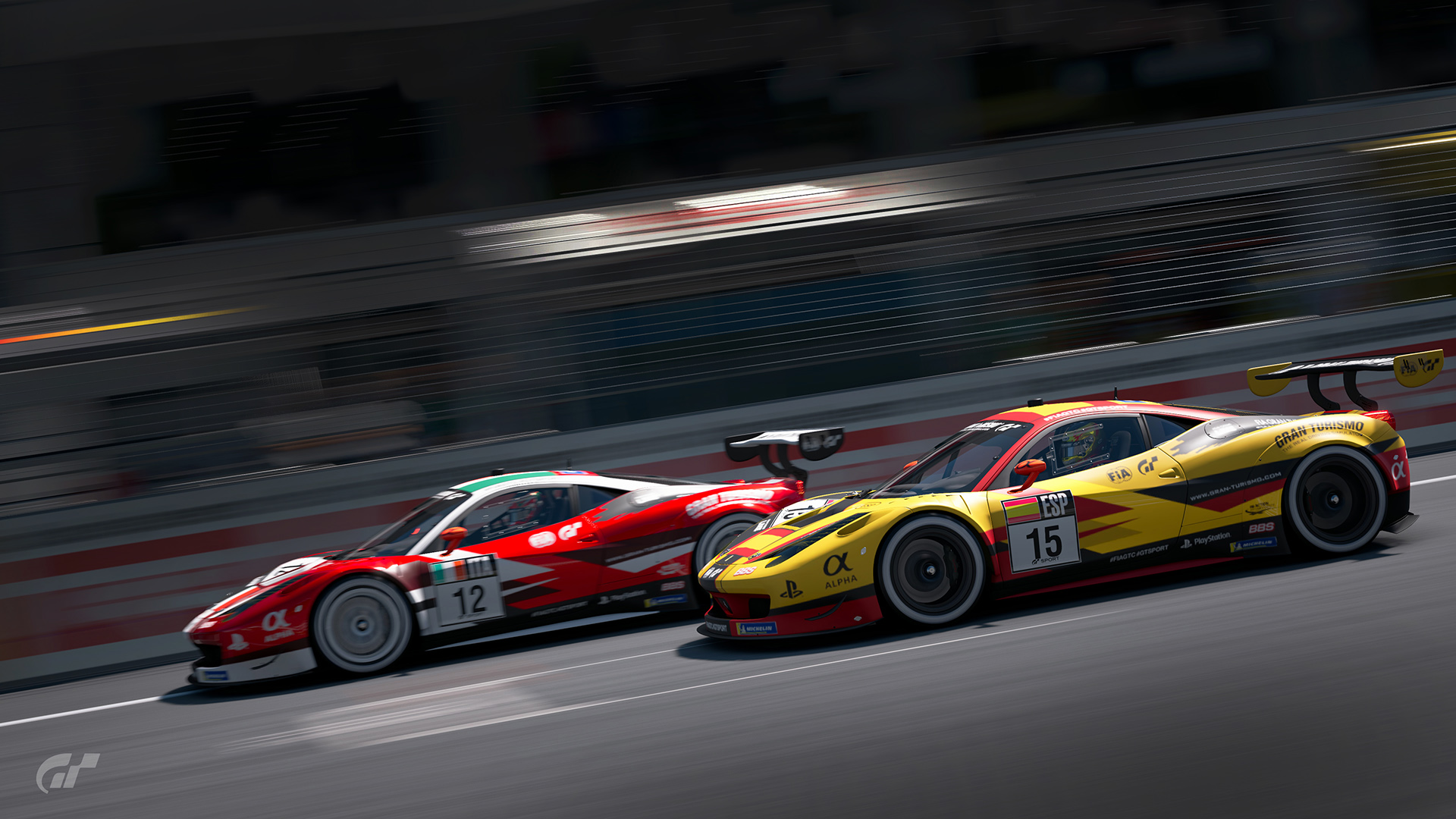 Lap 8 saw the first cars make their pitstops, but the leaders came in two laps later, all of them switching to the soft-compound Michelins for an all-out dash to the finish. The second half of the race saw Japan’s Kanata Kawakami (SG_Kawakana) making big moves, working his way up to 4th place after starting the race in P8. Right behind him were Tomoaki Yamanaka of Japan (yamado_racing38) and Andrew Lee. 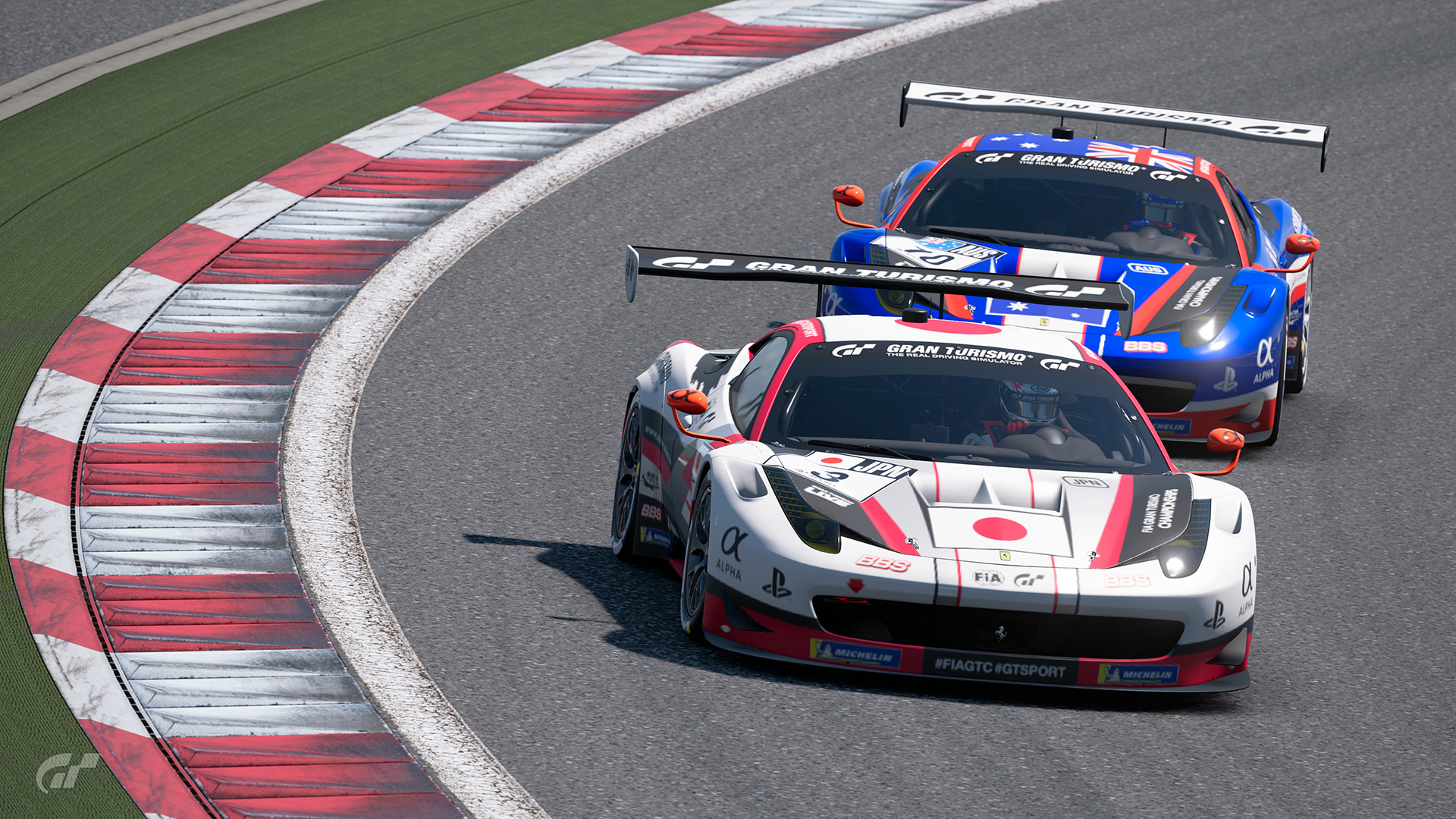 At the start of lap 13, Yamanaka took away P4 from Kawakami, but their intense duel allowed the top three cars to pull away. Gallo and Fraga seemed content running in P2 and P3 behind Serrano, as neither of them made any serious move to take the overall lead. Serrano was well aware that these two drivers were the among the most competitive around and, sooner or later, they were going to come for him.

It was sooner: on lap 15, Gallo made a move to the outside of Serrano, out-braking the Spaniard into Turn 1. Fraga looked to overtake him as well, but he ran into the back of Gallo’s car, which slowed him down and nearly sent the Italian off. The contact was enough to affect both cars and allow Serrano to hold onto the lead. One lap later, an almost identical scene played out at the same place, but this time, Gallo did manage to get past Serrano to reclaim the lead. While the leaders were scrapping, Yamanaka snuck up on Fraga, looking for a spot on the podium. With one lap left, it was now a four-horse race: Gallo, Serrano, Fraga, and Yamanaka. 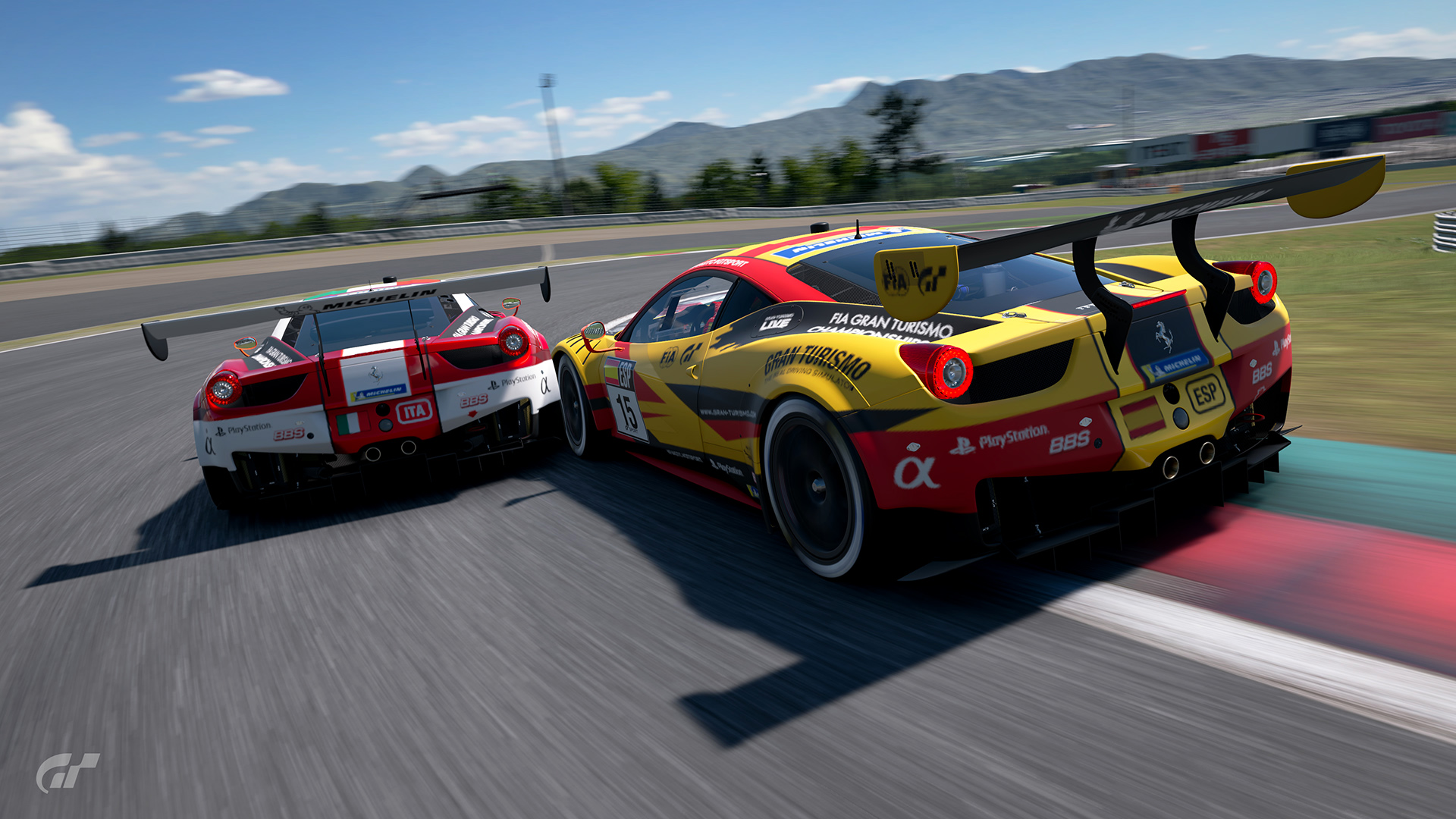 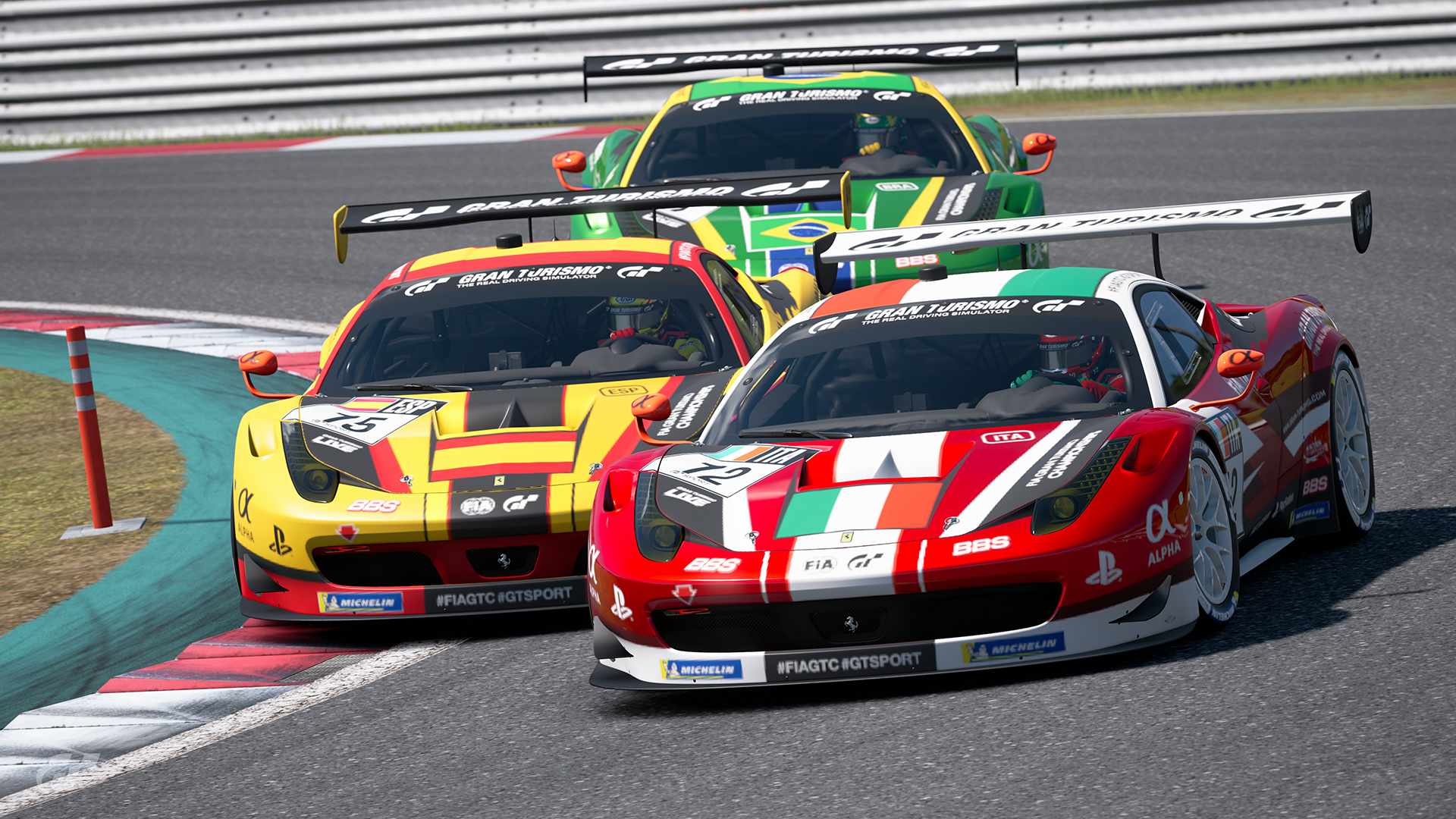 With each driver gallantly defending their respective positions, the race ended in that order, with Valerio Gallo winning his third event of the Series, earning three points for a grand total of 18 going into the World Finals. Jose Serrano’s 2nd-place finish (two points) kept him in the championship hunt with 12 total points, while the 3rd-place finish of Igor Fraga kept him in 5th and a chance to steal the championship away next month. 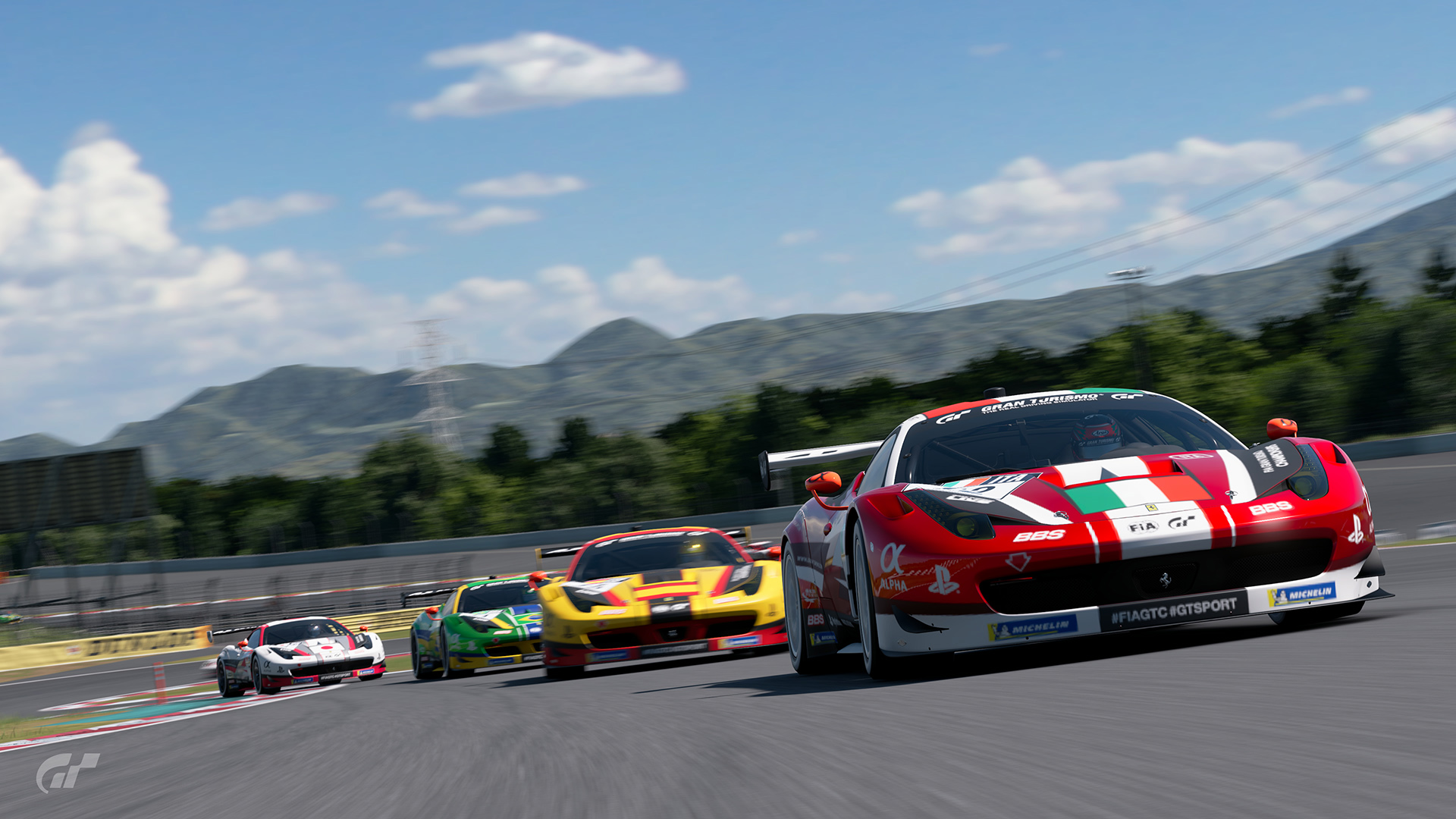 “I’m so excited because it was one of the most insane races, and it also brought back memories of last year’s World Finals,” Gallo said. “Since the last race, I’ve been trying to apply the same strategy, which was to stay behind someone until the end of the race. First it was Miyazono, but he unfortunately went off, and the race changed a bit, but I was able to keep cool. I really enjoyed the battle with Jose (Serrano) at the end. I’m so happy to have raced with these guys today because I felt it was the best display of racing yet. It was a really memorable experience. With this win and having a six-point lead, it provides a huge motivation boost going into the World Finals.” 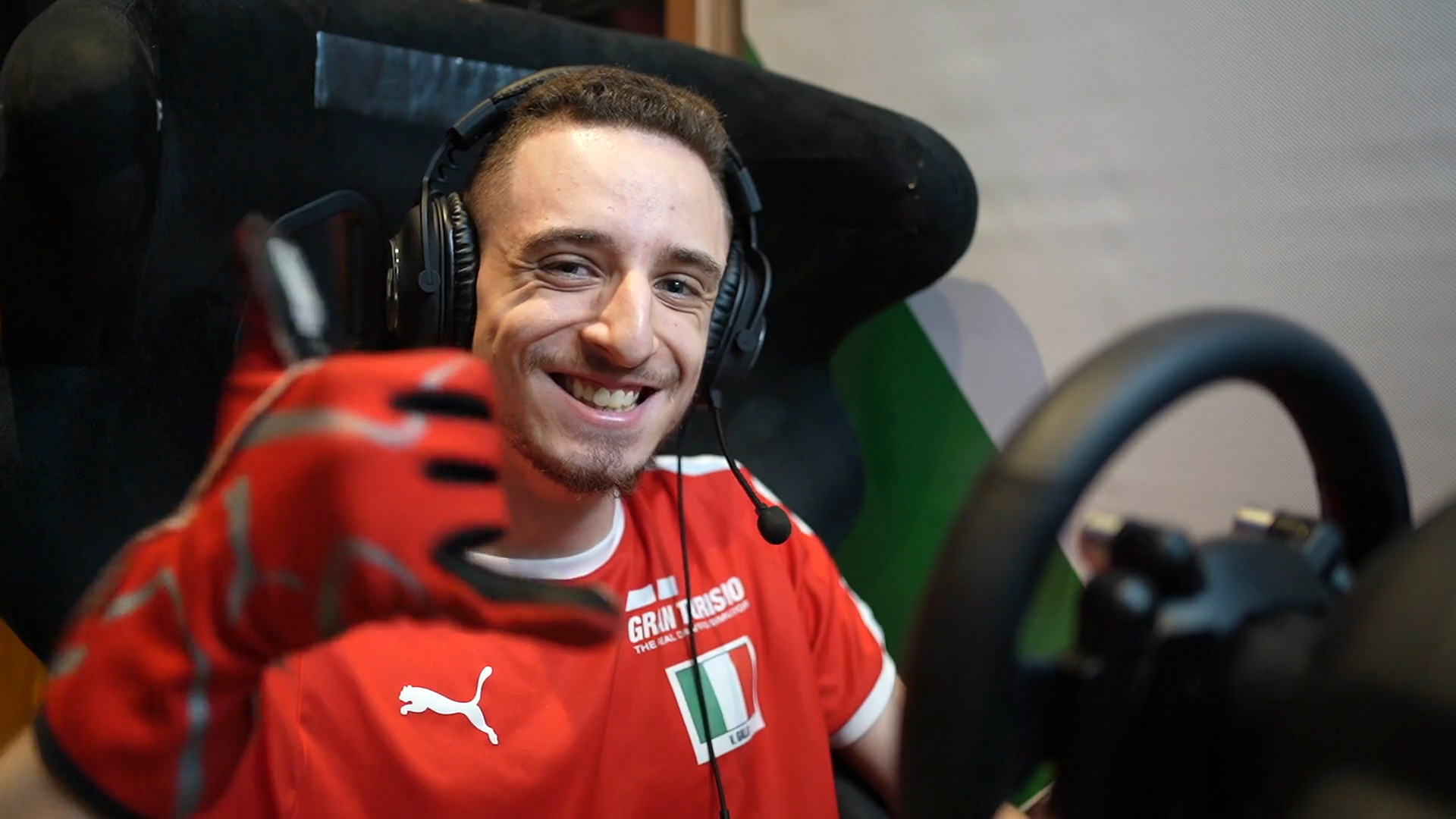 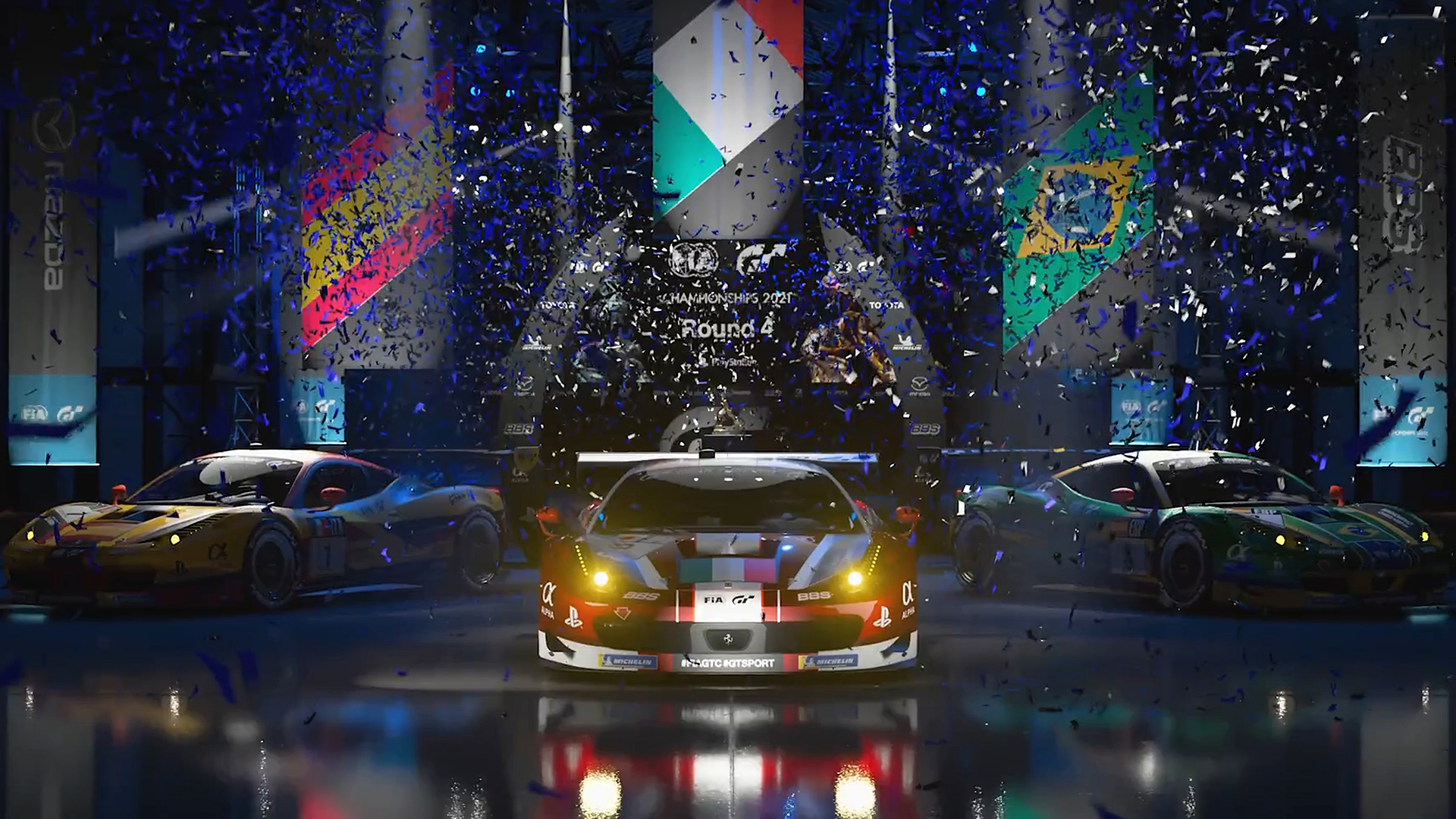 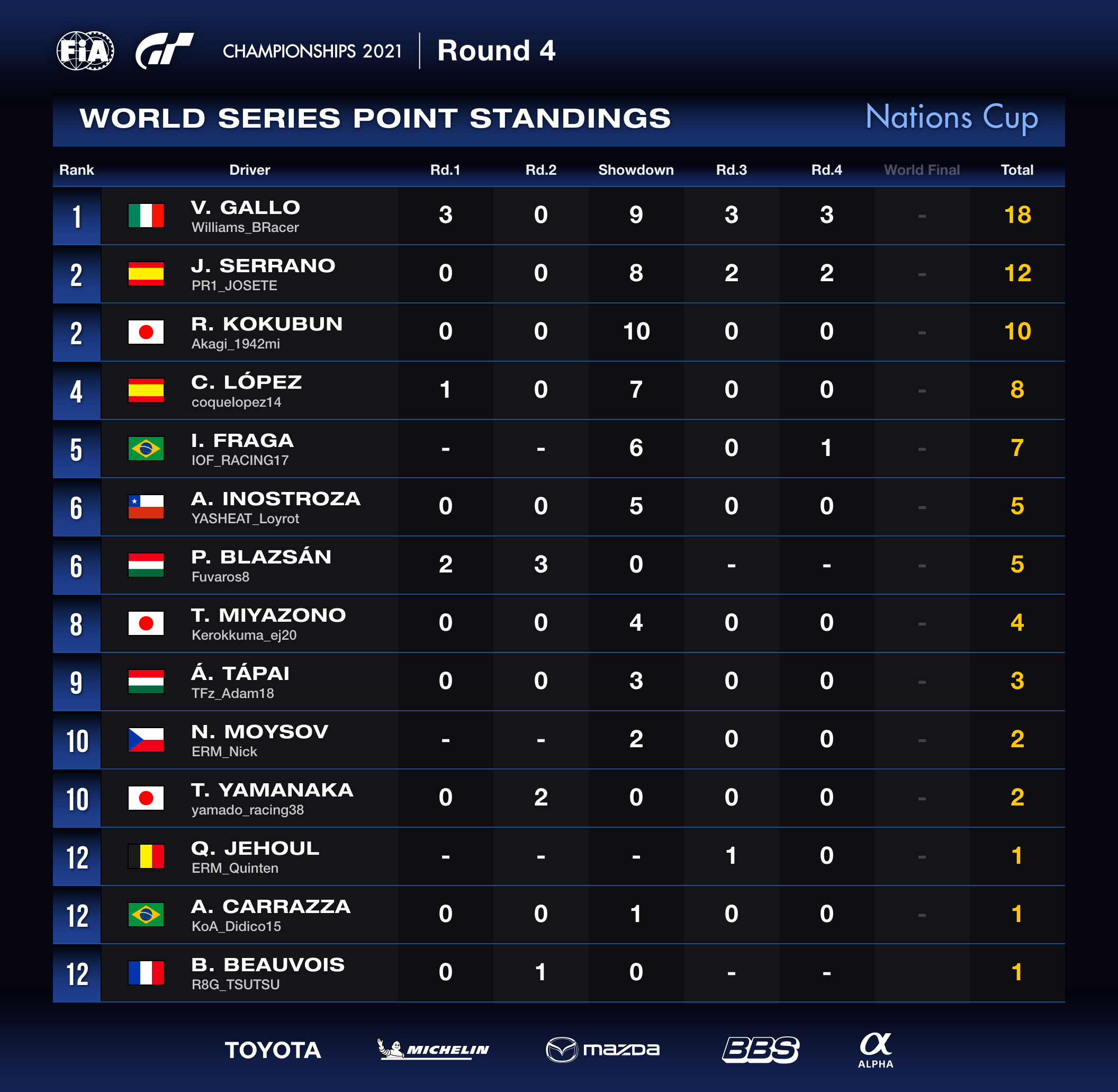 FIA GT Championships 2021 | World Series - Round 4
Who will get closer to the title at the end of Round 4?
Intense, Wheel-to-Wheel Action Around 'The Green Hell'
Tokyo, Japan (14 November, 2021) – Representing the last rou...