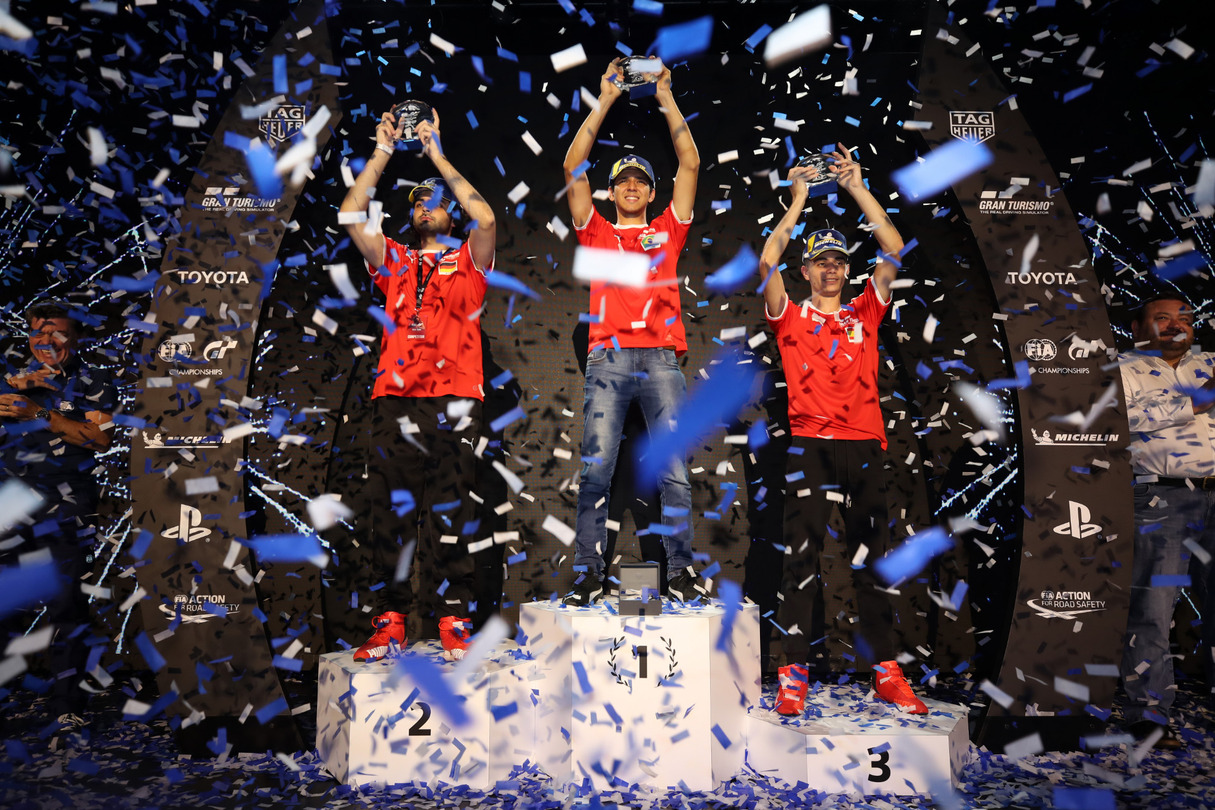 New York, USA (25 August, 2019) – Electricity was in the air for the finale of the 'World Tour 2019 – New York,' the third leg of the five-race FIA Gran Turismo Championships 2019 Series where 46 of the best Gran Turismo racers from 19 countries battle for a spot at the World Finals, which will occur in Monaco in November. The last day of the event featured the Nations Cup, where, unlike the previous day’s Manufacturer Series, racers represented their home countries, competing for individual and national glory. 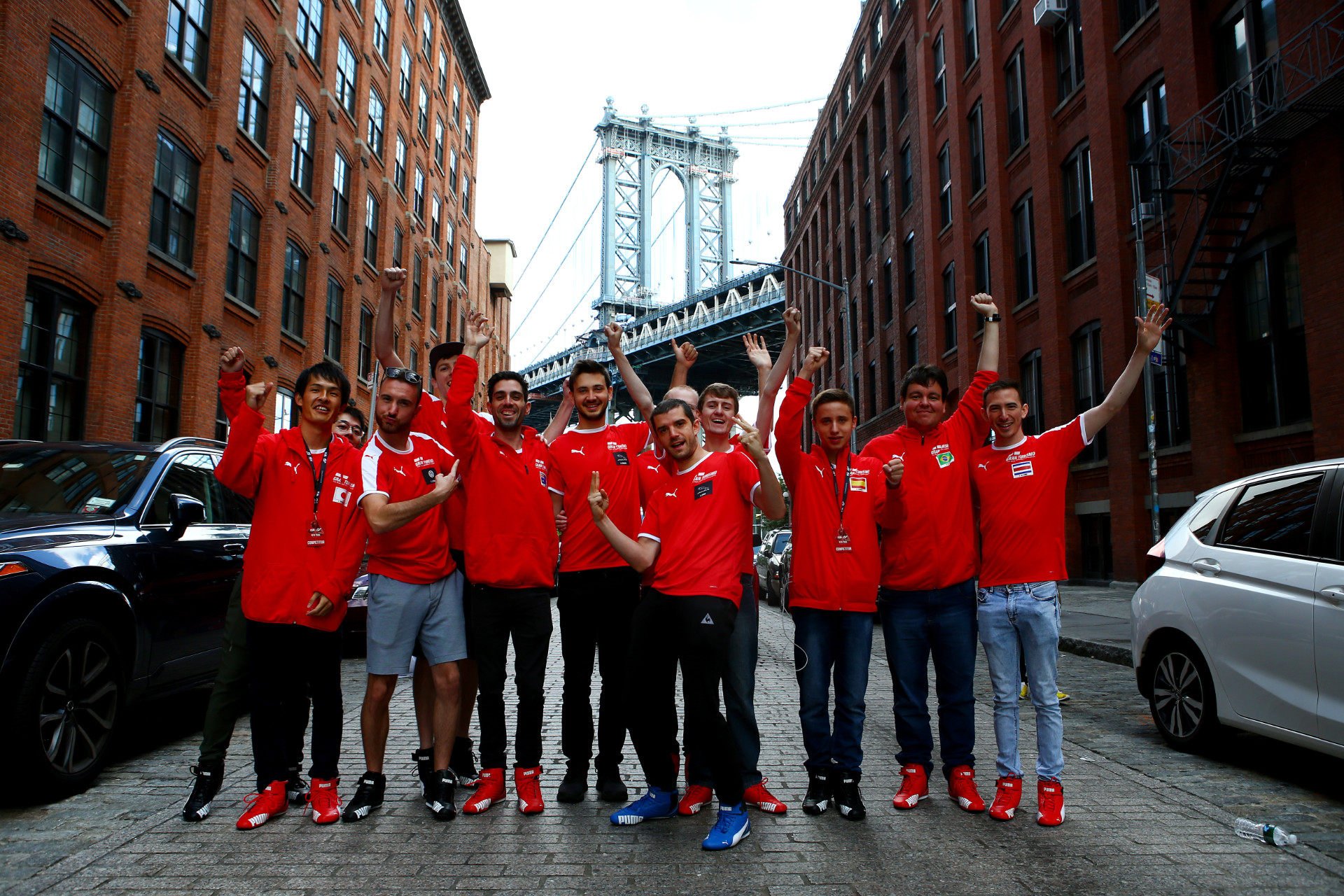 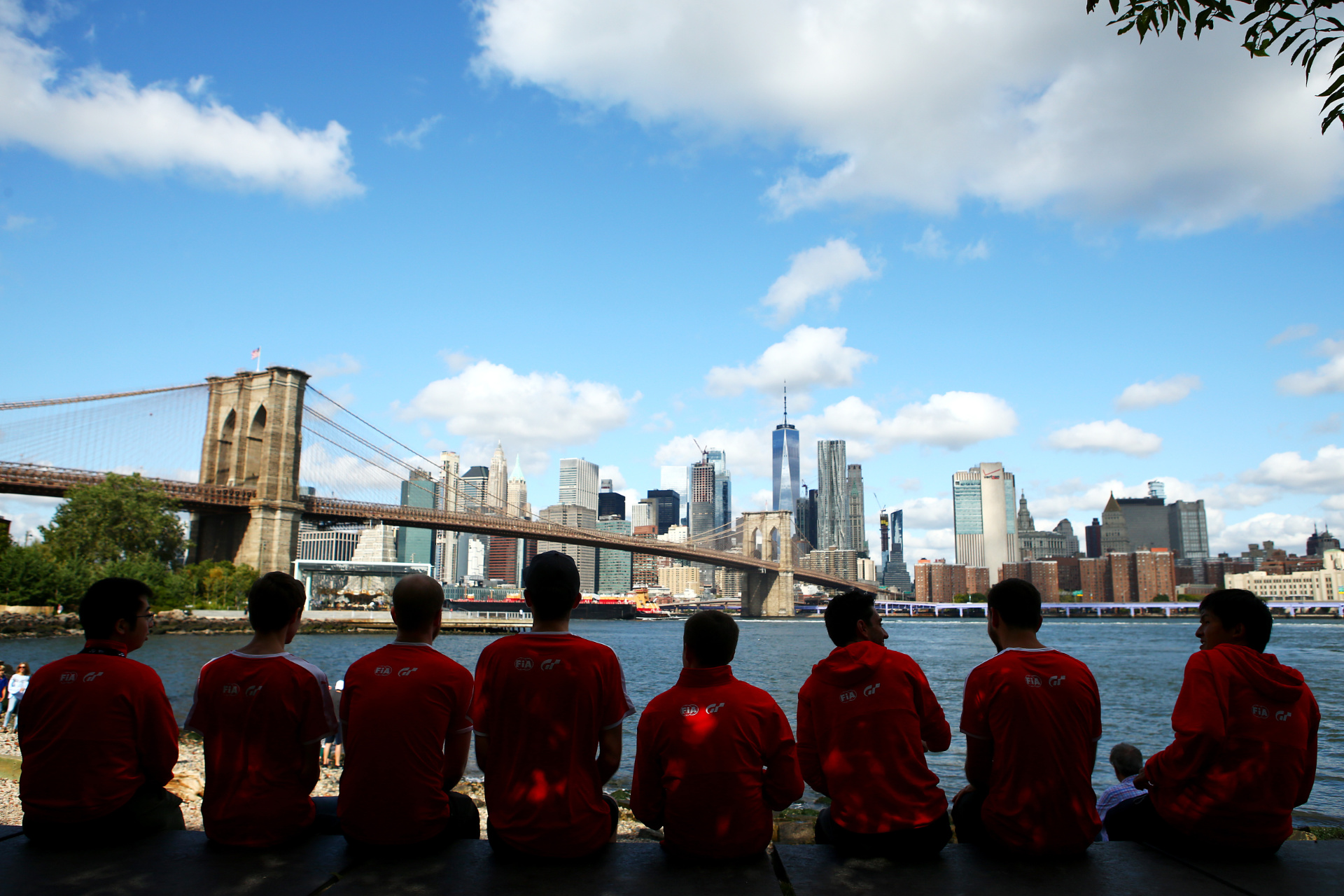 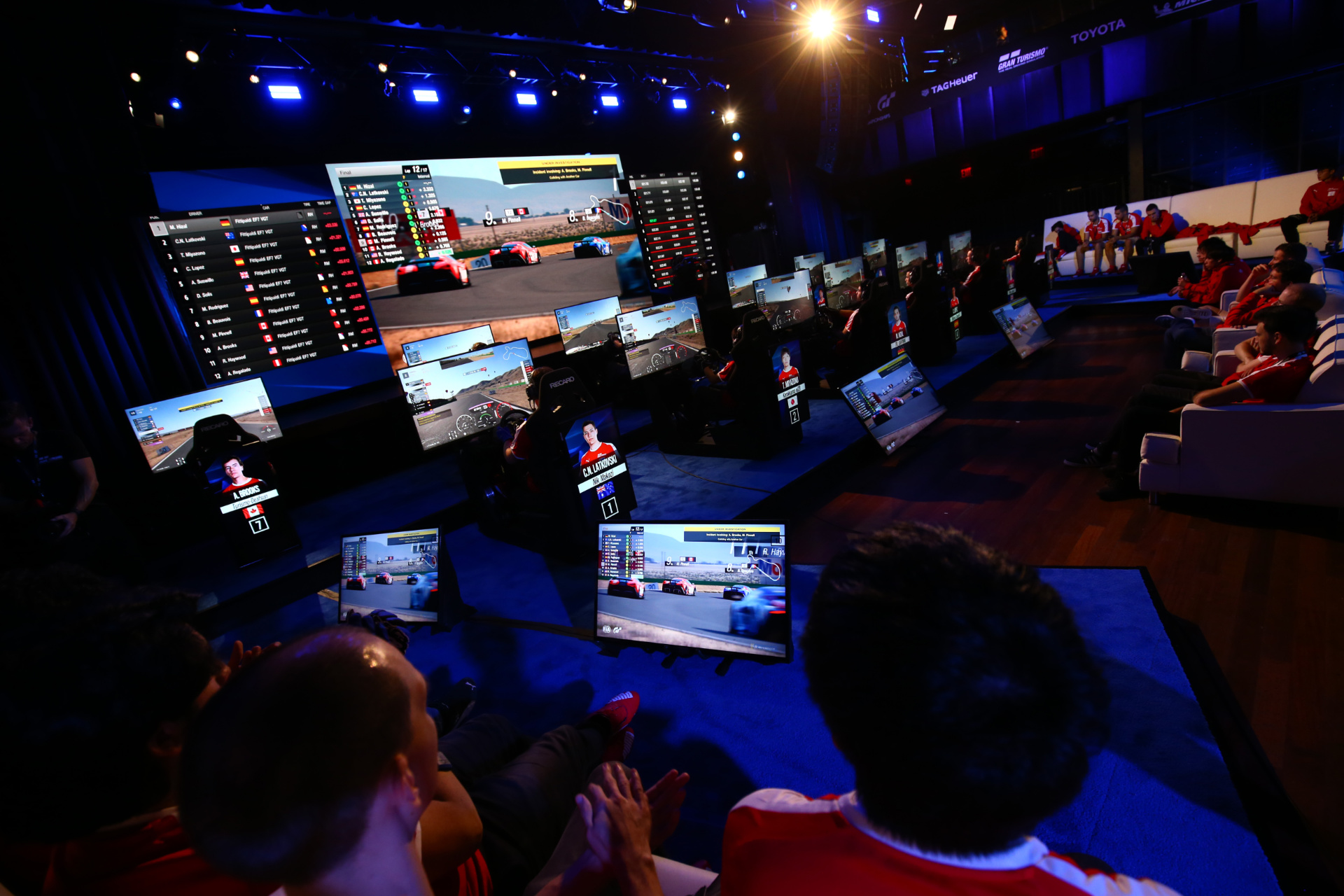 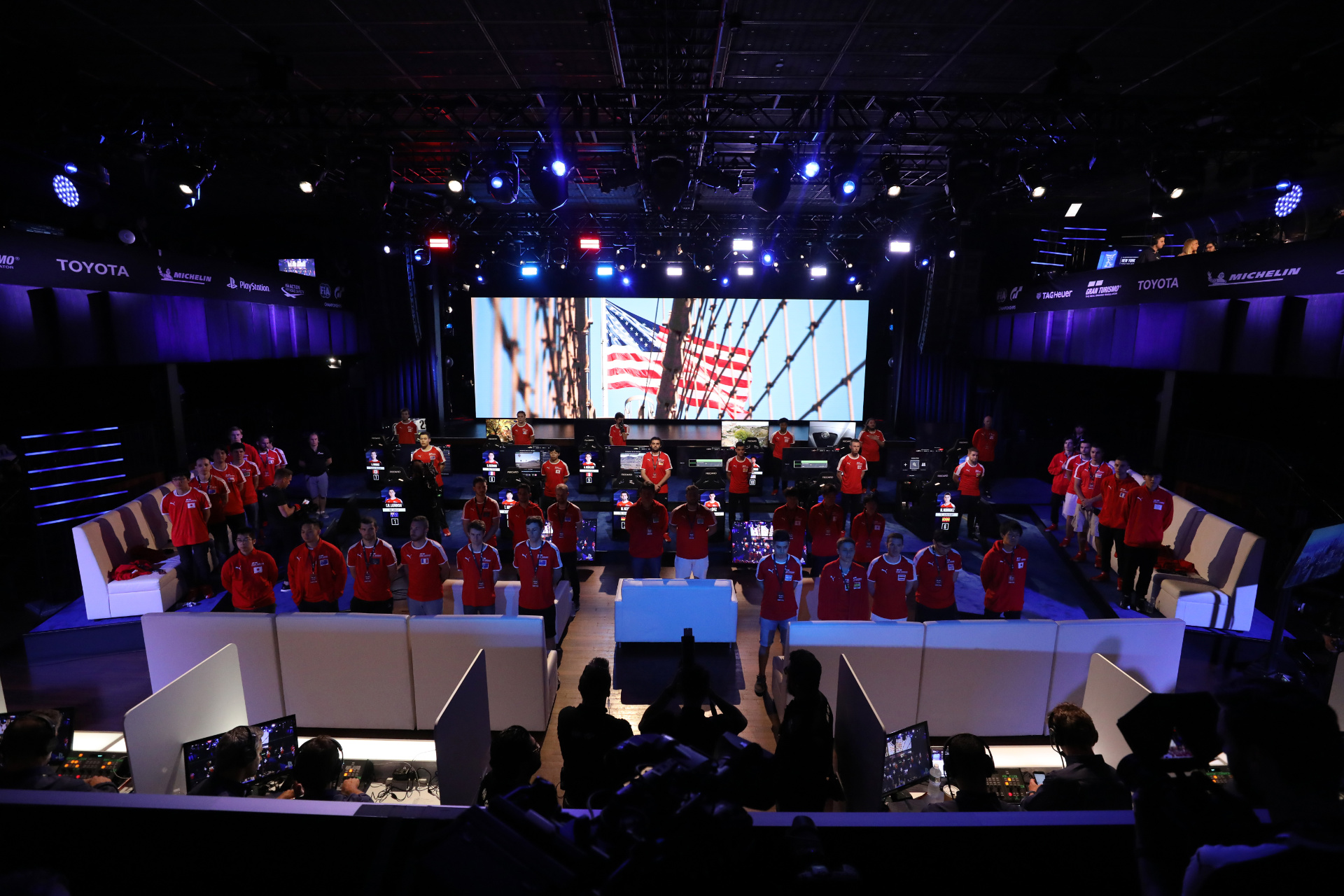 The festivities started with qualifying where the favourites showed off their stuff. Mikail Hizal (Germany) threw down a blazing lap time on his second time around Spa-Francorchamps, a circuit not seen before in Gran Turismo Sport, in the Red Bull X2019 racecar to claim pole position for Semi-final A. Brazil’s Igor Fraga secured the second-quickest time, giving him pole position for Semi-final B.

The venue for the first Semi-final contest of the day was Willow Springs International Raceway, nicknamed Big Willow. In this 17-lap race with the Fittipaldi EF7 super sports car, the competitors were required to use both hard- and medium-compound tyres, so devising an effective race strategy was vital.

Pole-sitter Mikail Hizal led Takuma Miyazono (Japan) and Cody Nikola Latkovski (Australia) through the first corner. All three of them began the race on medium-compound tyres, while Coque López (Spain) and Adam Suswillo (UK), in positions 4 and 5, opted for the hard-compound rubber, saving the quicker medium-compound tyres for the end of the race. Despite the slower tyres, Latkovski quickly passed Miyazono for 2nd place.

Lap 9 saw the race leader, Hizal, dive into the pits, which also prompted the 3rd-place car of Miyazono to come in. Changing to the harder-compound tyres didn’t slow the two racers down one bit, nor did it affect Latkovski, who pitted a lap earlier. Further down the field, the Canadian drivers, Brooks and Mark Pinnell, battled for 10th place, a vital spot because it represented the final spot to qualify for the repechage round.

Hizal maintained a comfortable lead of three-plus seconds, cruising to victory, followed by Latkovski, Miyazono and López, who all won a spot in the final.

Unlike the first race, there was plenty of drama right away as a battle royale broke out in the middle of the pack after Fraga got cleanly away. Many of the cars bounced off each other through Turns 2 and 3, while some put a wheel off. The main benefactor of the mayhem was Nicolás Rubilar (Chile), who shot up from 5th all the way to 2nd place. And then he really went after it, virtually parking his Ford Focus rally car on the rear bumper of Fraga’s Subaru, waiting for the right opportunity to pass. Meanwhile fierce battles continued to rage throughout the field, as the 5th-place Hyundai Genesis rally car driven by Benjámin Báder (Hungary) gave Rick Kevelham (Netherlands), in a Ford Mustang rally car, all that he could handle.

Lap 10 saw the two race leaders, Fraga and Rubilar, pit swapping their medium-compound tyres for the hard-compound one, giving the race lead temporarily to Báder, which was short-lived after he pitted the next lap. Fraga reclaimed the lead, with both Rubilar and the Toyota 86 rally car of Rayan Derrouiche (France) on his tail. The Frenchman worked his way up from 11th place all the way to 3rd, and he wasn’t done. Derrouiche went hard after Rubilar as they went two-wide through Turn 5 and the Turn 6 hairpin, trading paint on a couple of occasions, but Rubilar was able to hold him off.

The next few laps saw yet another brilliant battle between the 4th-, 5th-, and 6th-place drivers—Blazan, Ryota Kokubun (Japan) in a Peugeot RCZ rally car, and Wong. In fact, they nearly took each other out on a number of occasions, refusing to give an inch…one could hardly blame them for being so stubborn because an automatic place in the final was on the line. On Lap 16, Kokubun got away from Wong and Blazsán, but Anthony Felix, driving a Toyota 86 rally car, was filling his rearview mirror. All the while, the leaders raced hard to the end, with Fraga crossing the finish line first, while Rubilar successfully held off the hard-charging Derrouiche.

Those that failed to finish in the top four in the previous races, but made the top ten (5th to 10th place), were granted another chance to make the final in the repechage round. The top four finishers would advance, but, for everyone else, it would be "Sayonara New York". The competitors took the wheel of the Toyota SF19 Super Formula racecar for an all-out, pedal-to-the-metal 15-lap contest around 'Blue Moon Speedway', a super high-speed oval consisting of three corners.

Drafting on this high-speed course was key, so every competitor vied for advantageous positions on the track and in traffic to maximise the use of slipstreams. As a result, there were numerous lead changes, with exciting wheel-to-wheel racing that often saw cars lined up three and four wide on the straights.

When the chequered flag was waved, it was Manu Rodríguez from Spain, who crossed the line first by a mere five-hundredths of a second. In fact, the top four finishers were separated by a little more than a second, making this race the most hotly-contested of the day. 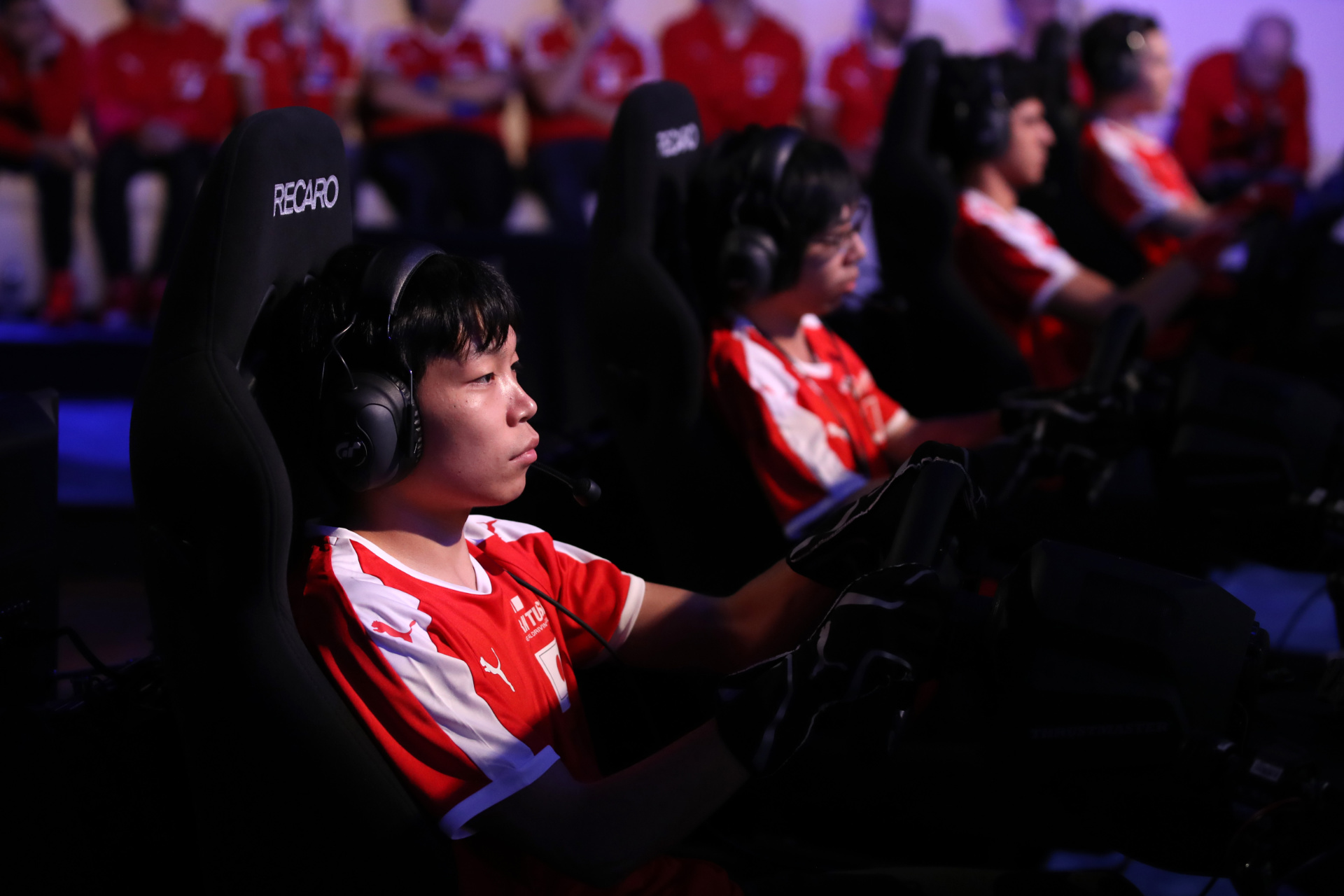 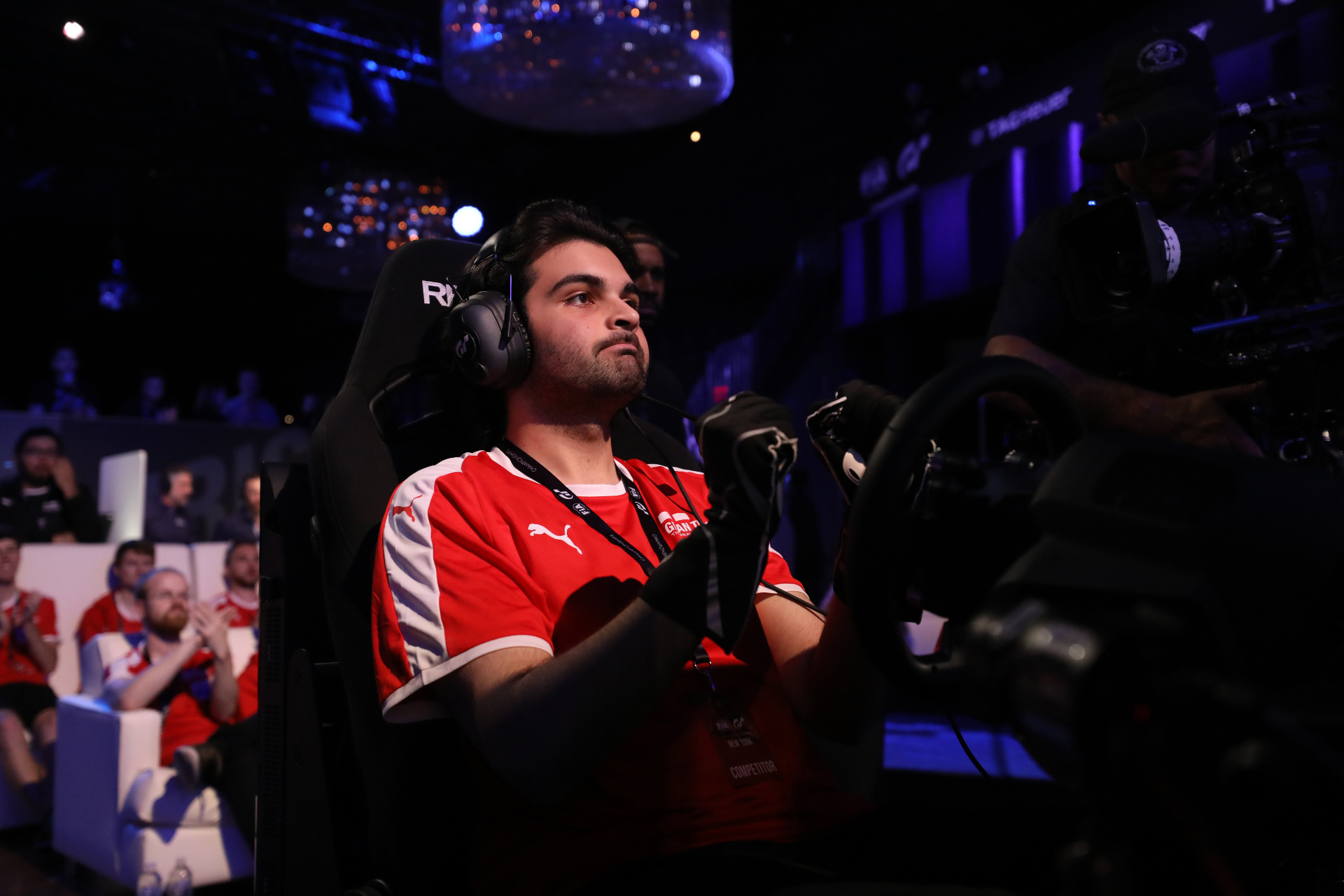 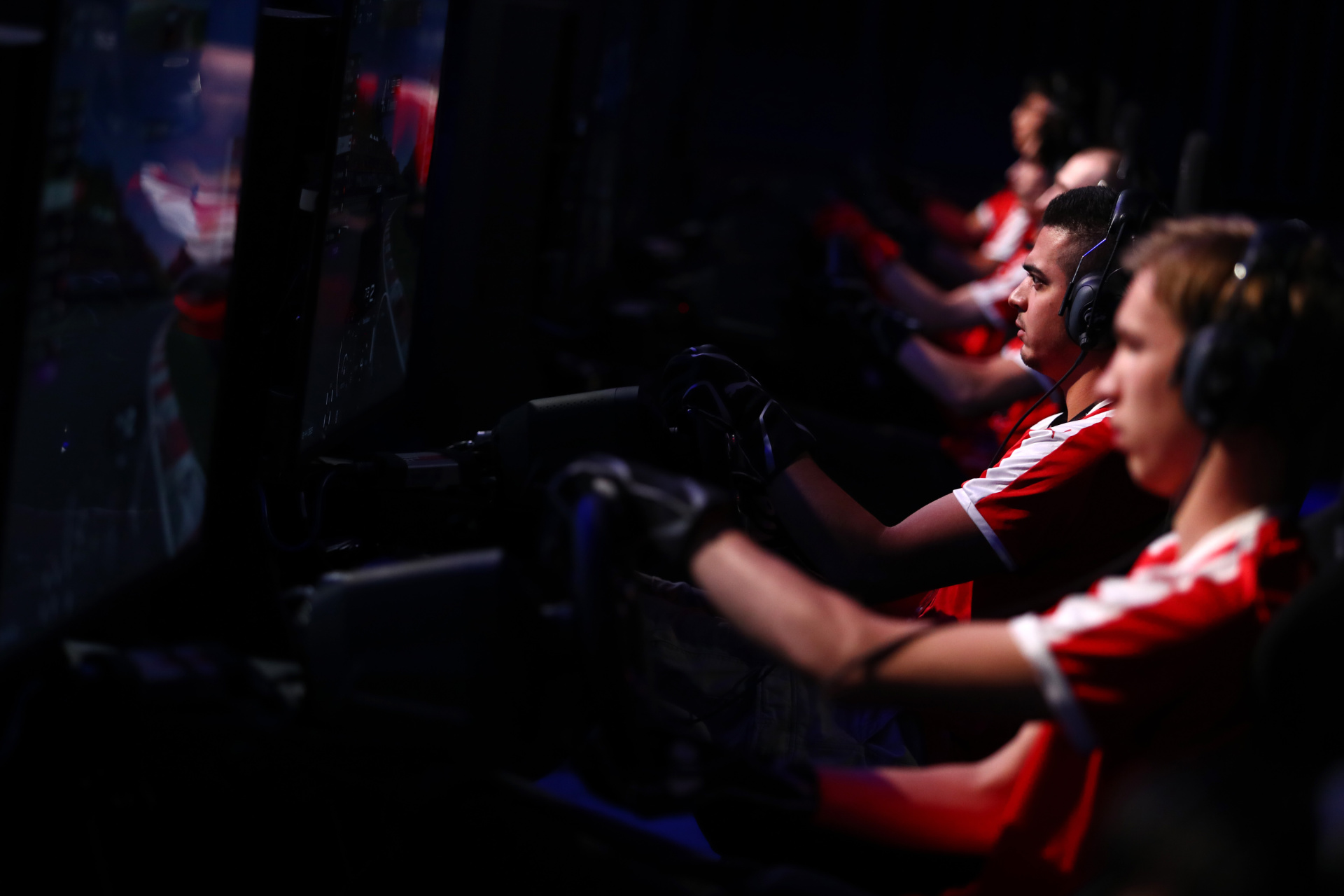 There was plenty of intrigue and excitement for the final race, especially between the two heavy favourites, Igor Fraga, last year’s Nations Cup champion, and Mikail Hizal, who looked hard to beat after his recent stellar performances. Serving as the venue for this 20-lap race was none other than Spa-Francorchamps, one of the most revered race tracks in history, making a much sought-after debut in the FIA Gran Turismo Championships. Fuel and tyre strategy would play a vital role here, as each competitor was required to pit at least two times in their Red Bull X2019 Competition racecar.

Mikail Hizal started on pole, and drove through the first few corners without incident at the start of the race. Nicolás Rubilar, on the other hand, had a dreadful start as he went off on the first corner, immediately dropping to the bottom part of the field. On the back straight of Lap 1, Igor Fraga, running on soft-compound tyres, overtook Hizal on the outside, grabbing the early lead. It was evident that the Brazilian wanted to be up front and build a large cushion on his softer rubber as the race progressed. On Lap 2, Takuma Miyazono, who sat comfortably in 3rd place, surprised everyone when he pitted for reasons unknown. He said later that he felt he needed to switch from his hard compound tyres to softer ones in order to keep pace with the leaders, but after he pitted, he found himself in 11th place.

Meanwhile, Fraga was steadily increasing his lead over the 2nd-placed Hizal, and by Lap 7 amassed a 14-second cushion. The following lap, Hizal pitted, switching to the hard-compound rubber, and returning to the track in 3rd place, handing 2nd place to Coque López of Spain. On Lap 9, Fraga ducked into the pits with an 18-second lead to switch from the soft-compound tyres to the hard-compound ones, as well as refuel. The question on everyone’s minds was if he could hold off the rest of the racers who were mostly on soft- and medium-compound tyres. During this time, Miyazono had worked his way all the way up to 2nd place when Hizal pitted on Lap 10 to take on fuel and switch to the soft-compound tyres. He returned to the race in 5th place, with his sights on catching Fraga.

Lap 11 saw Fraga build a huge 17-second lead, prompting him to pit for fuel and switch to medium-compound tyres. He returned to the track in 3rd place, giving Miyazono the race lead. But his time at the top didn’t last long when he pitted for fuel, ultimately dropping him to 8th place. Things only got worse for the Japanese driver when Cody spun and then cut off Miyazono’s car on the back straight, causing him to spin and drop to the bottom of the pack. As a result, Latkovski was assessed a heavy 10-second penalty. Meanwhile, López claimed the overall lead with Fraga and Hizal right behind him, but he still had to pit, so the real duel for the championship was between the 2nd- and 3rd-placed cars of Fraga and Hizal. On Lap 16, Fraga made room for Hizal, only to take advantage of the German's slipstream, and, less than a lap later, Fraga got him back in a brilliant move on the outside.

On Lap 19, López pitted, leaving Fraga and Hizal to duke it out for the win. Hizal, on the soft-compound tyres, looked for any opportunity to pass Fraga, who was on the slower medium-compound tyres, but Fraga successfully blocked Hizal every time. Then the most controversial moment of the weekend occurred when Fraga’s car seemed to slow fractionally on the straight, forcing Hizal to back off. Hizal showed his disapproval at the move, and then he was forced to slow his pace to conserve what little fuel he had left, handing the championship to Fraga – a man who had already qualified for the Nations Cup Final at Monaco in November thanks to his Nürburgring victory in the second World Tour of the year. German Hizal crossed the line five seconds after the Brazilian, followed by López of Spain in 3rd position. Of note, after the race, Fraga was assessed a five-second penalty for lifting off the accelerator, but he had enough of a cushion to retain the win. 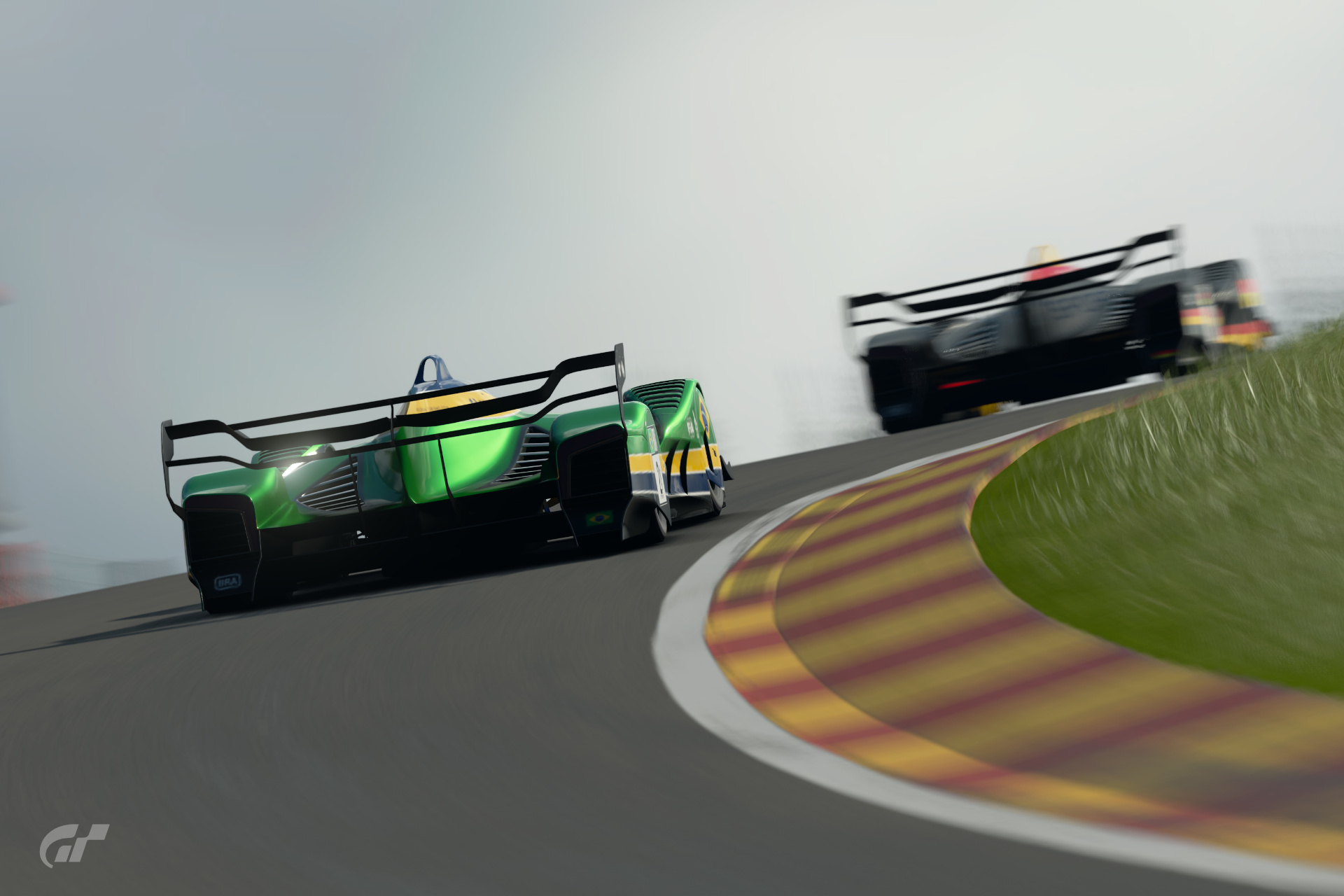 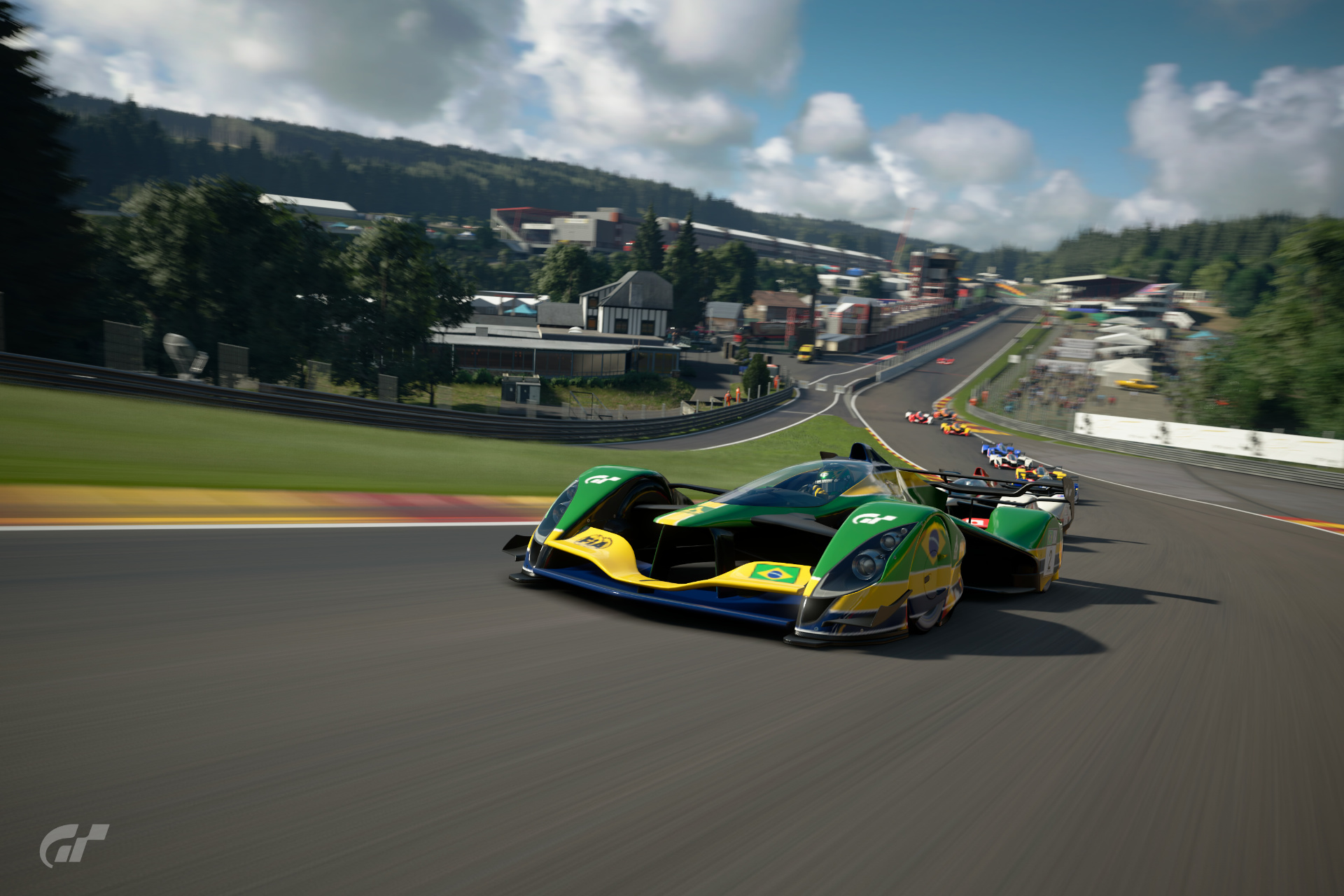 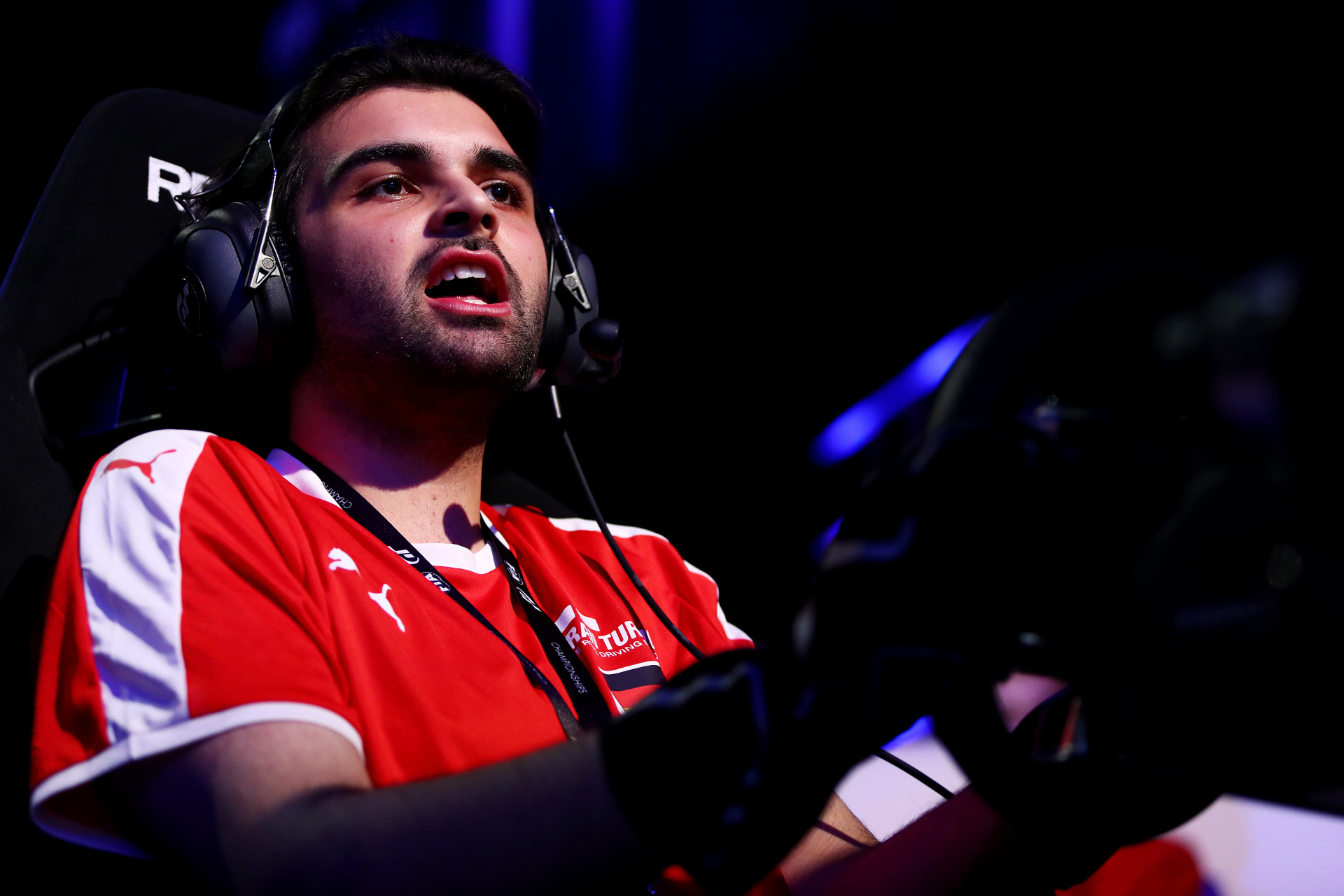 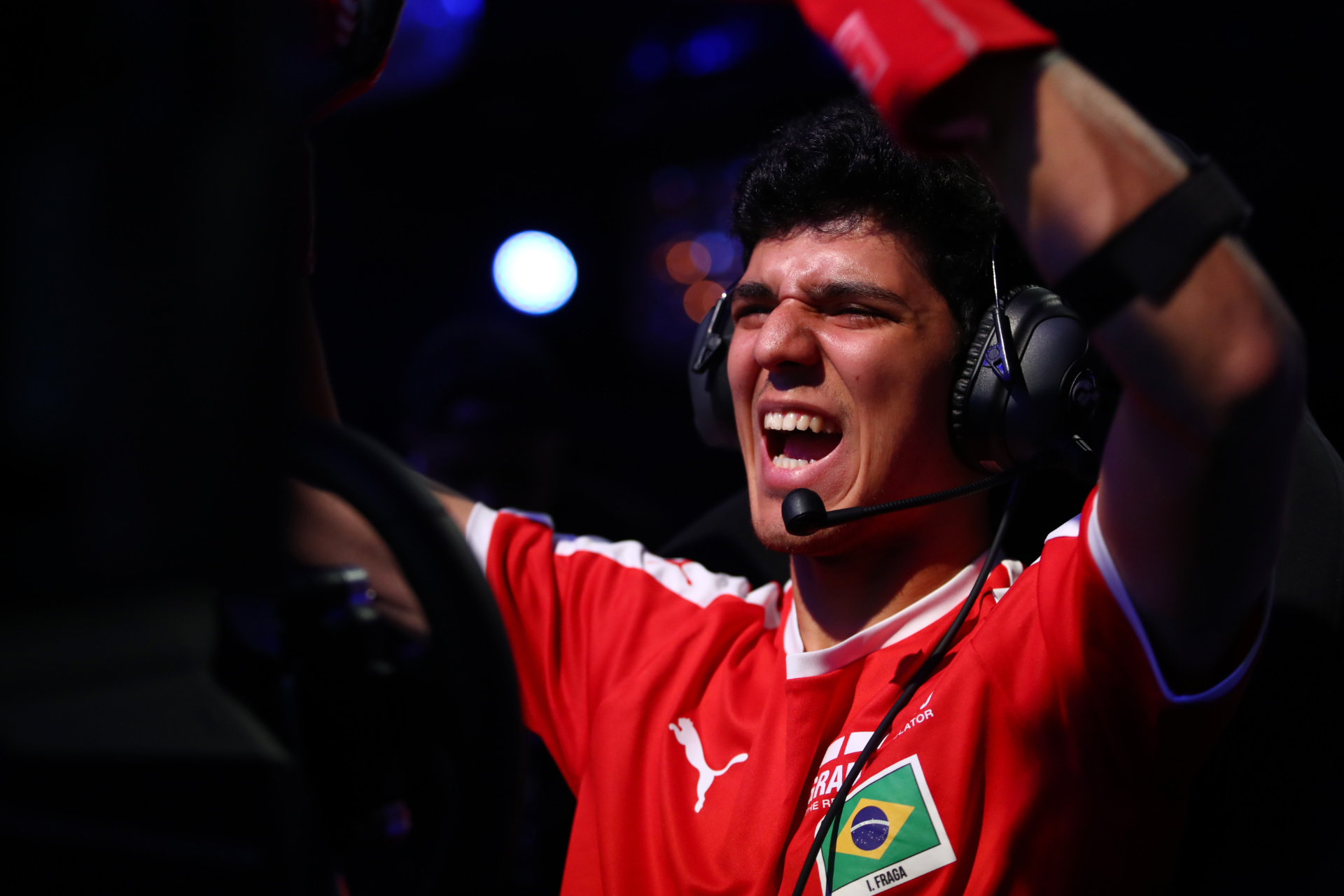 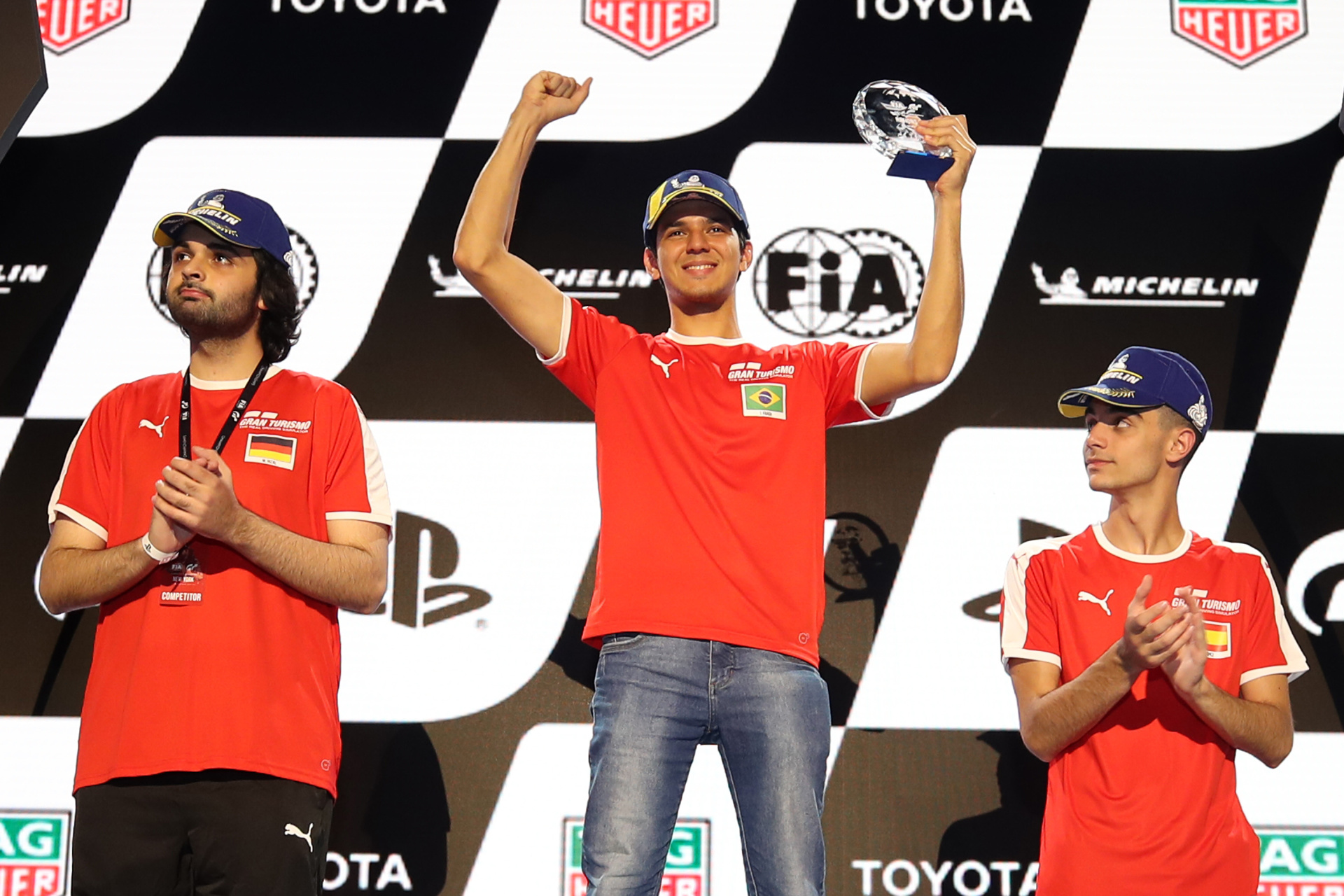 “I’m shaking a little bit because it was an intense race. I chose to start with the soft-compound tyres because the Red Bull X2019 racecars have a lot of dirty air, so I wanted to clean air in front of me and build a big gap. I wanted to stay in the lead as much as possible because, with all the dirty air, it would be difficult to work my way up to the front. I think it worked pretty well.“ 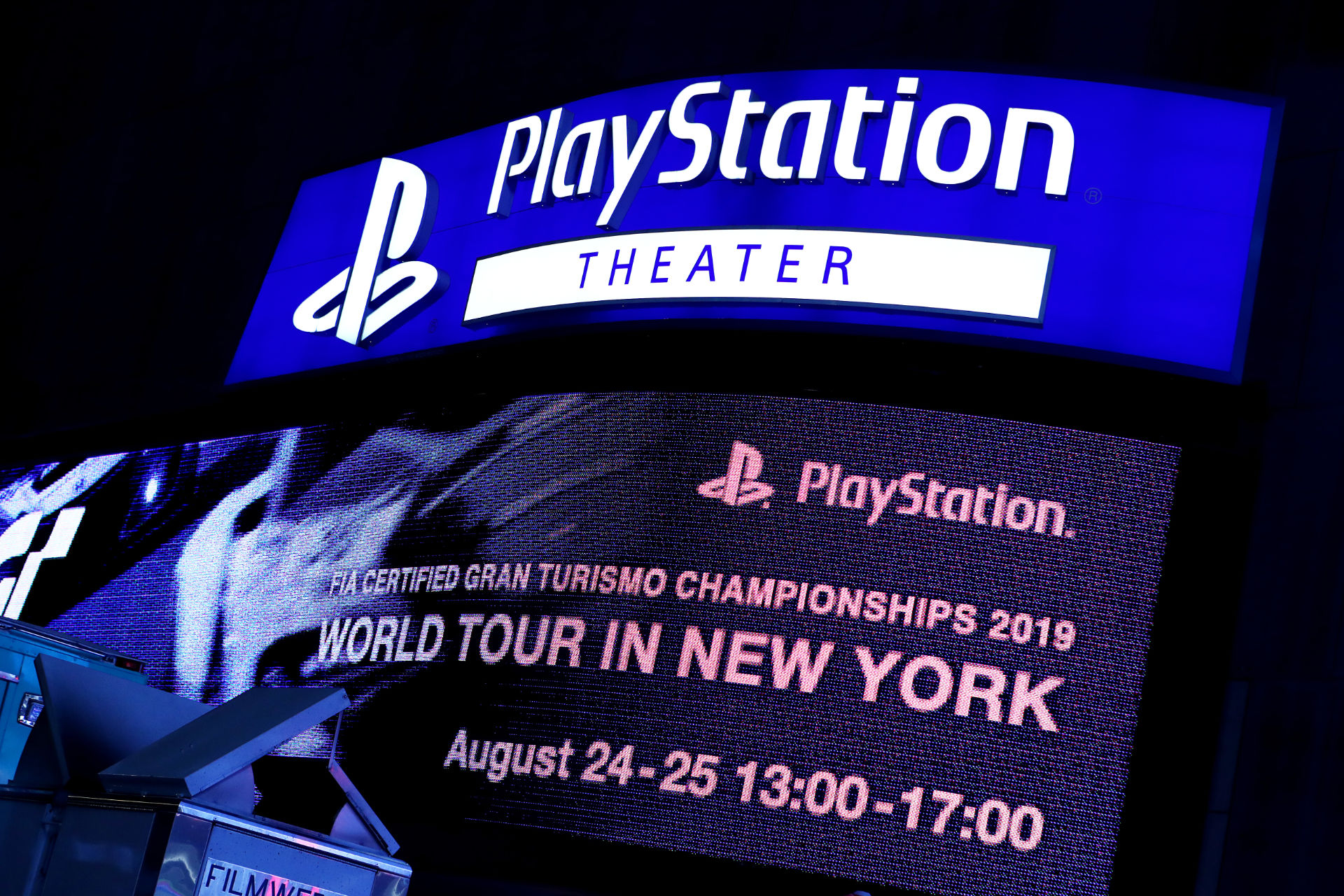 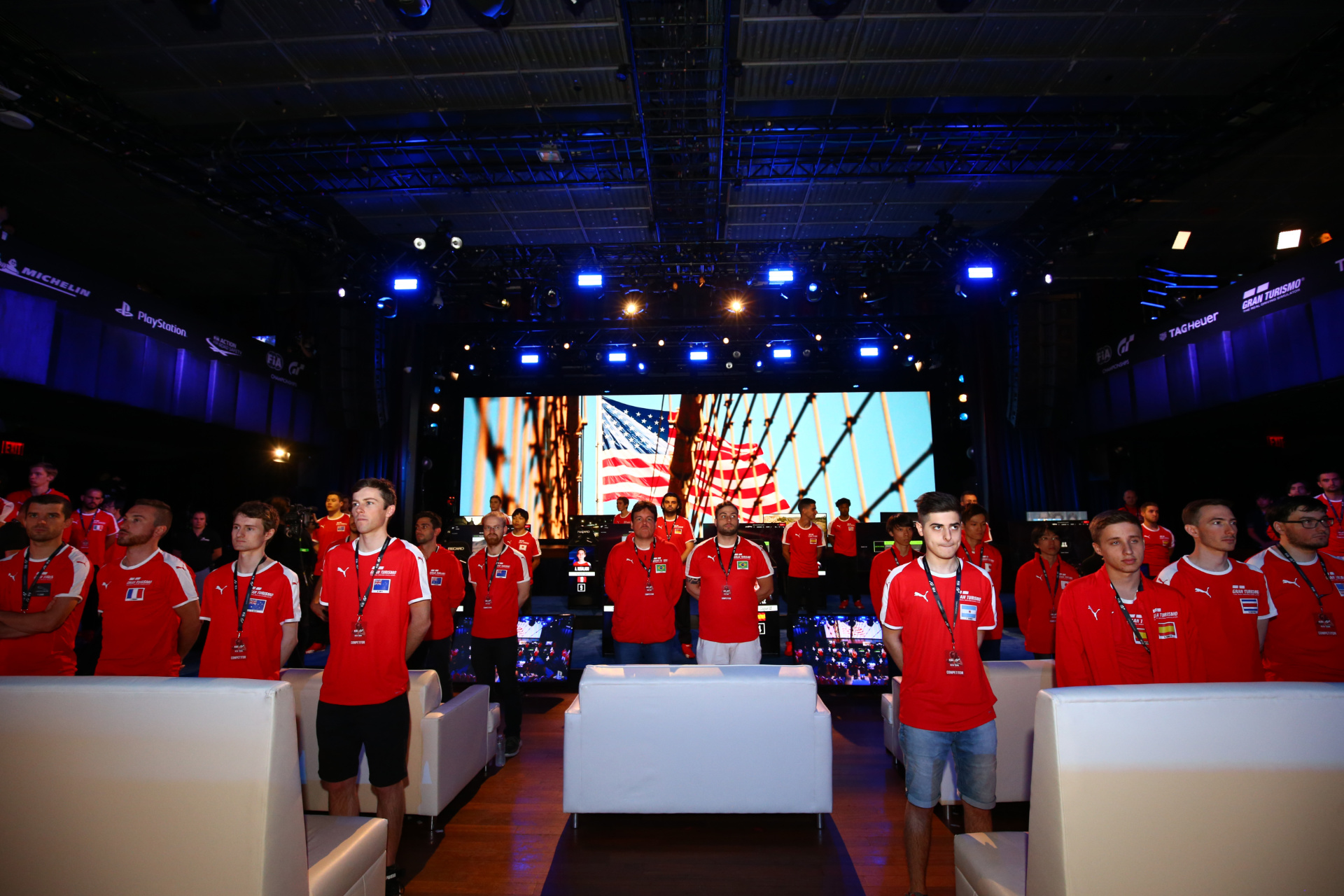 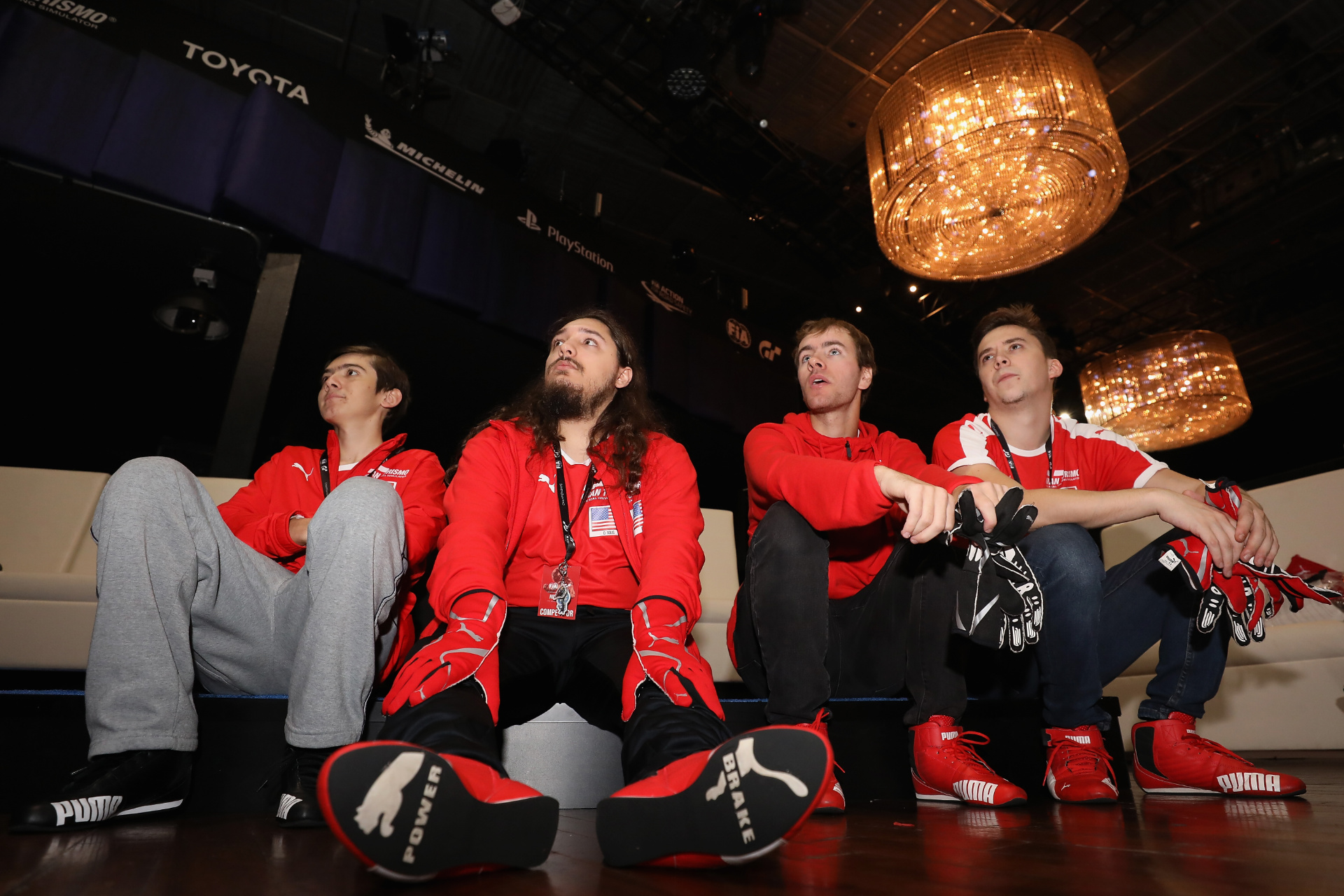 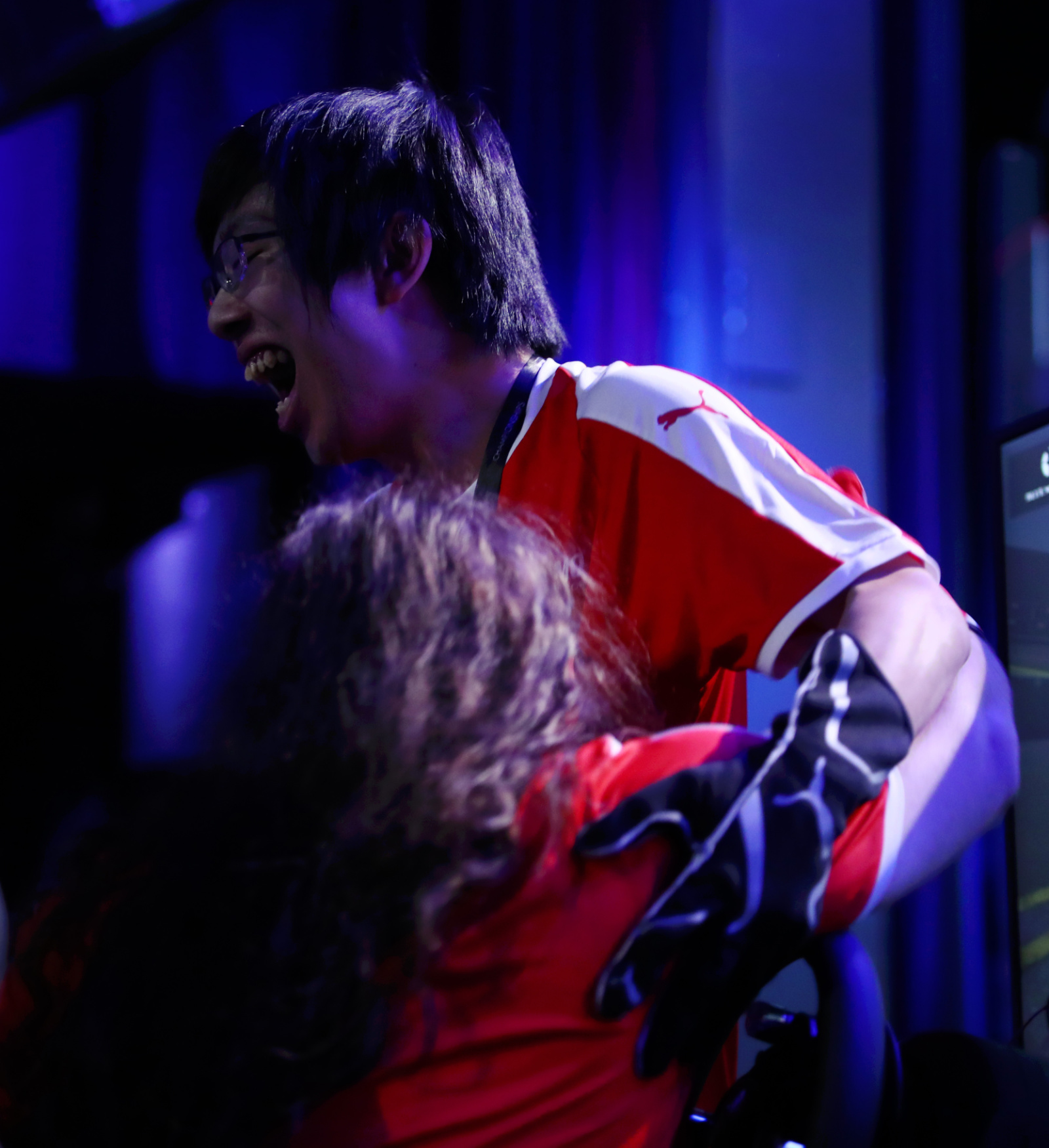 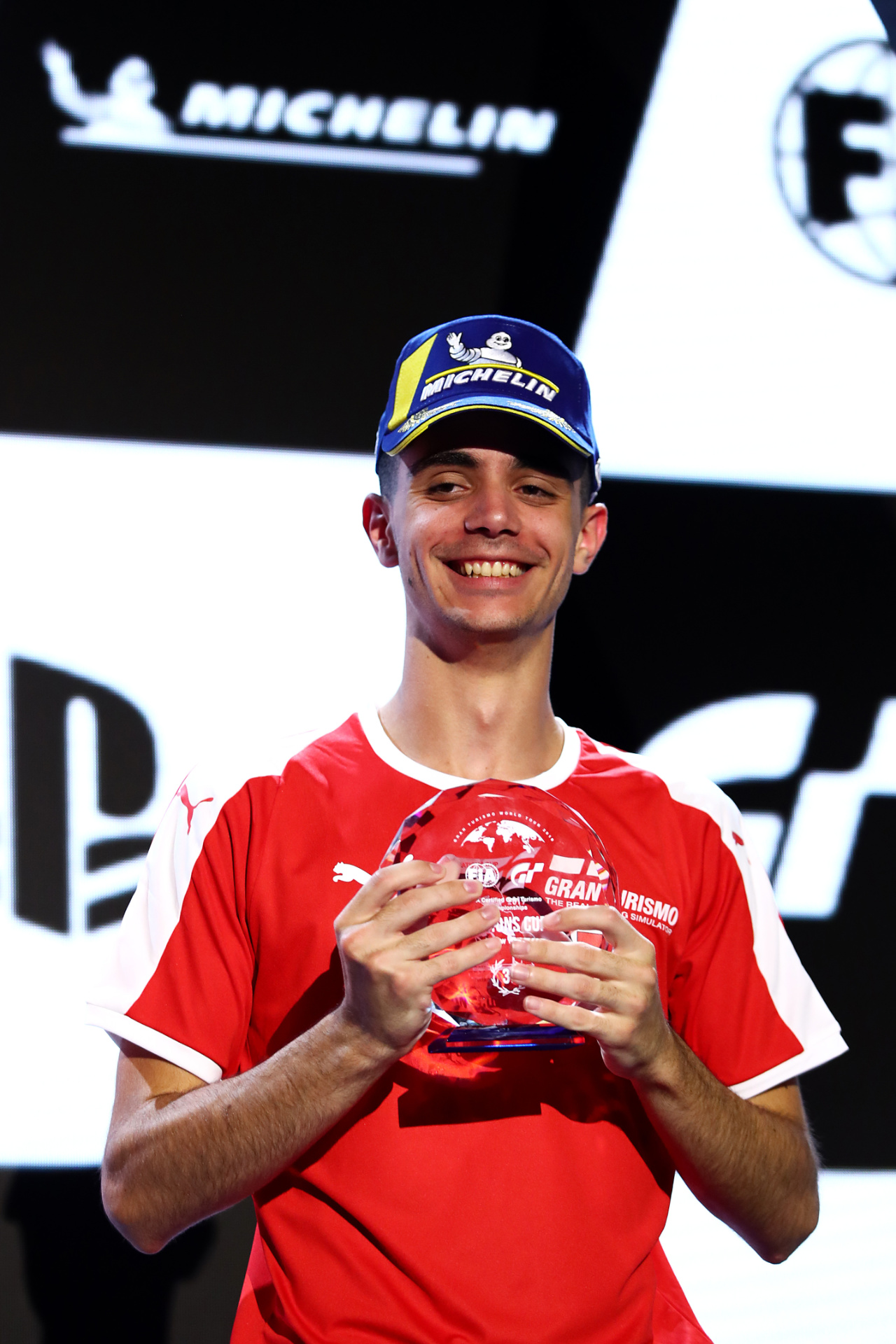 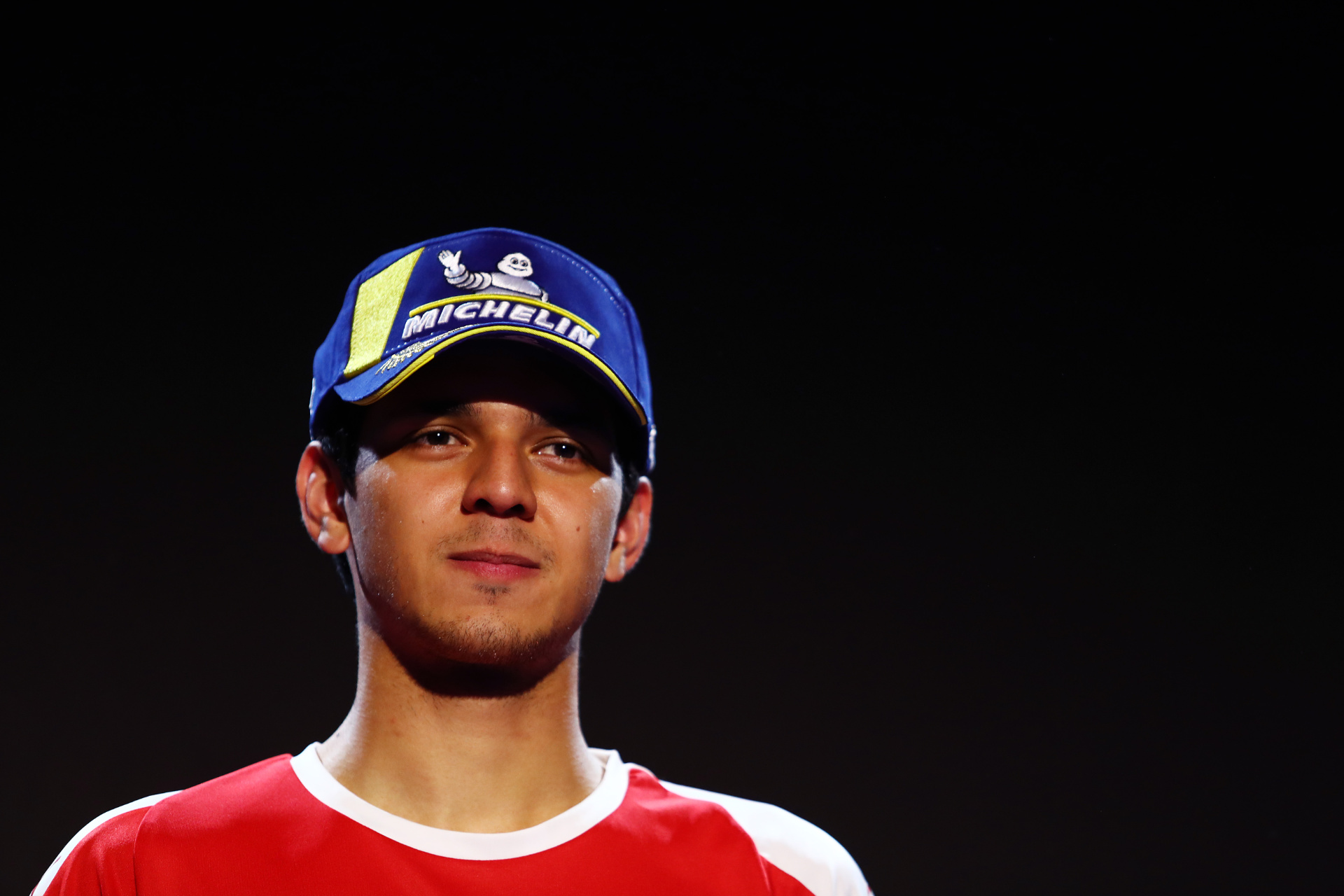 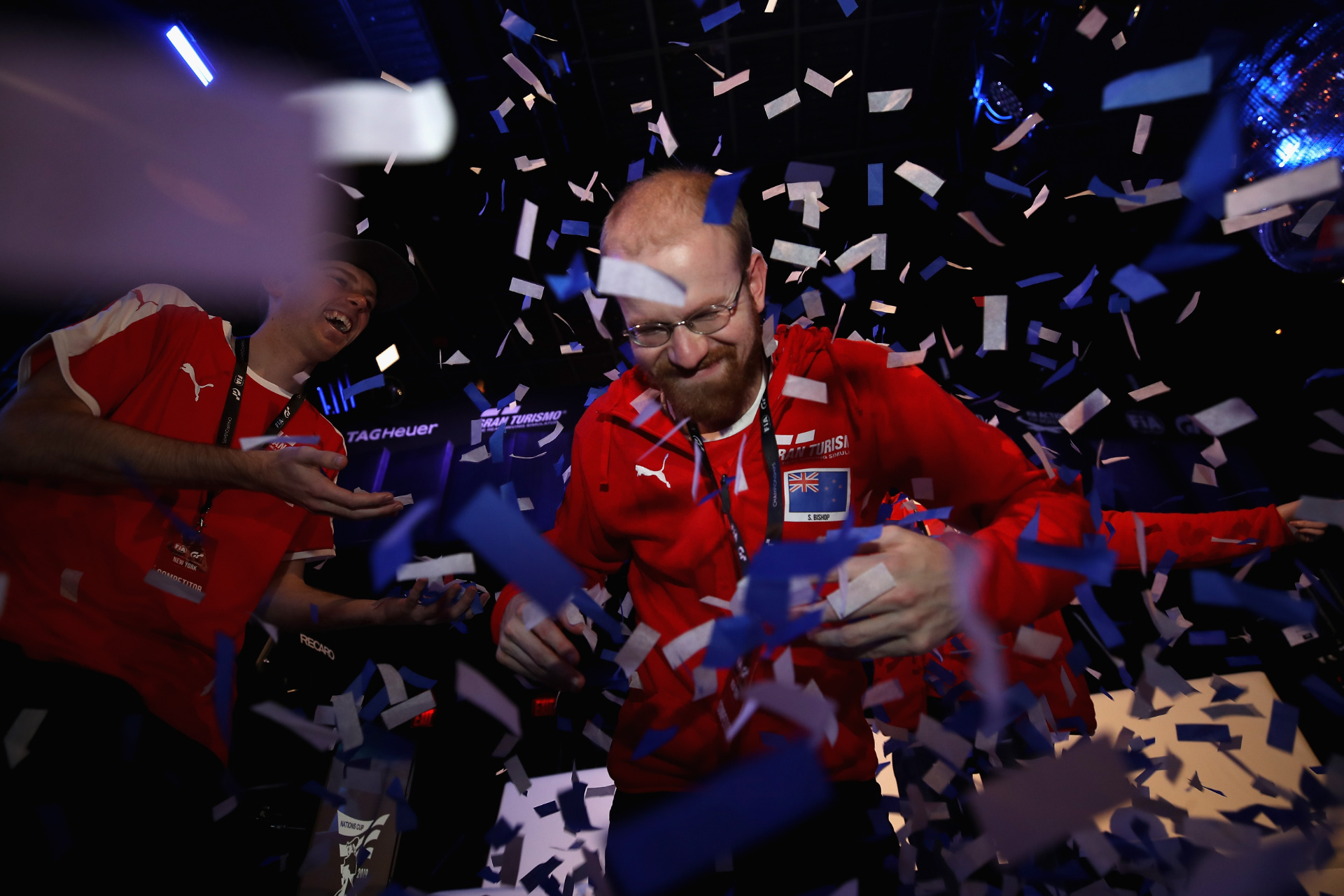 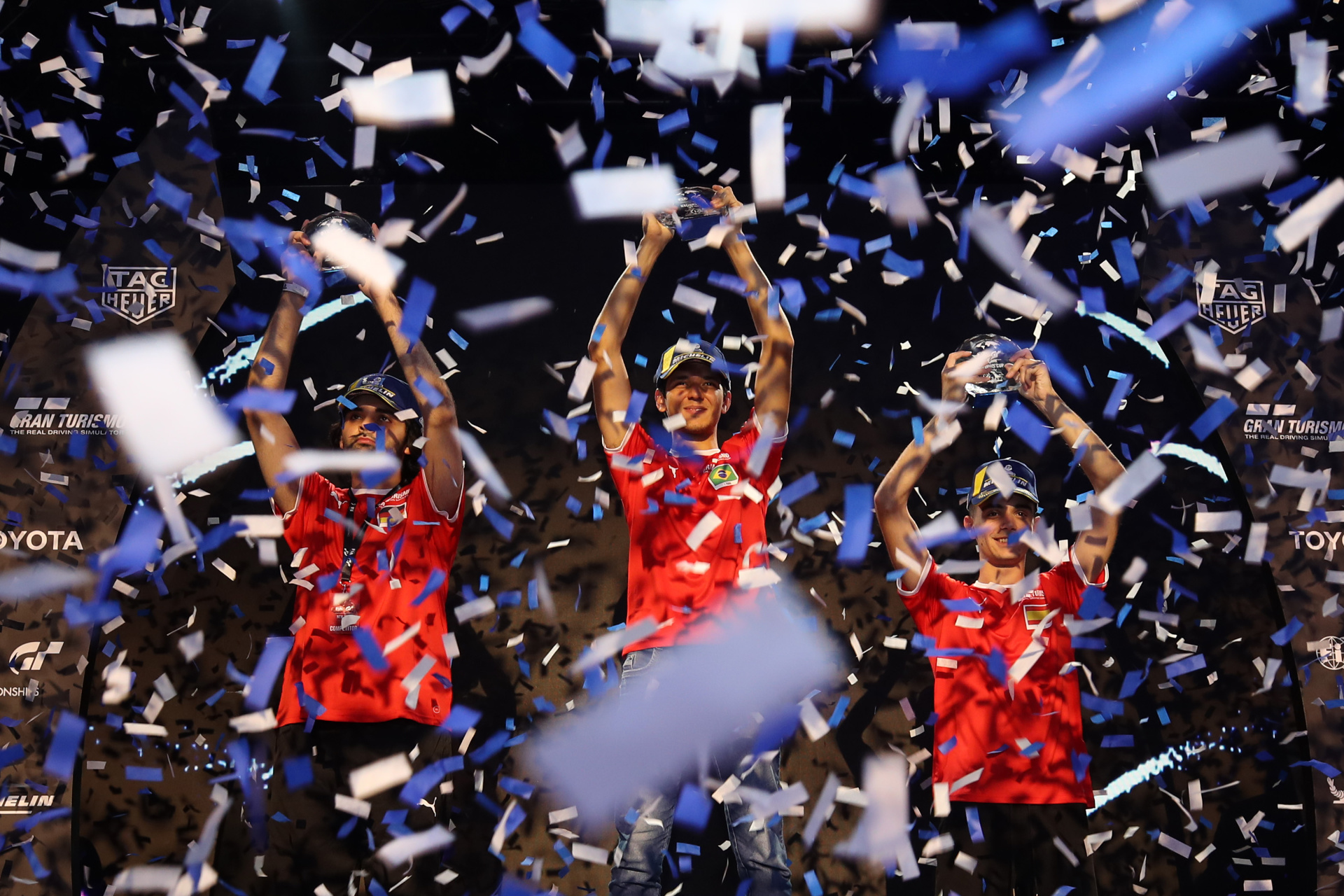 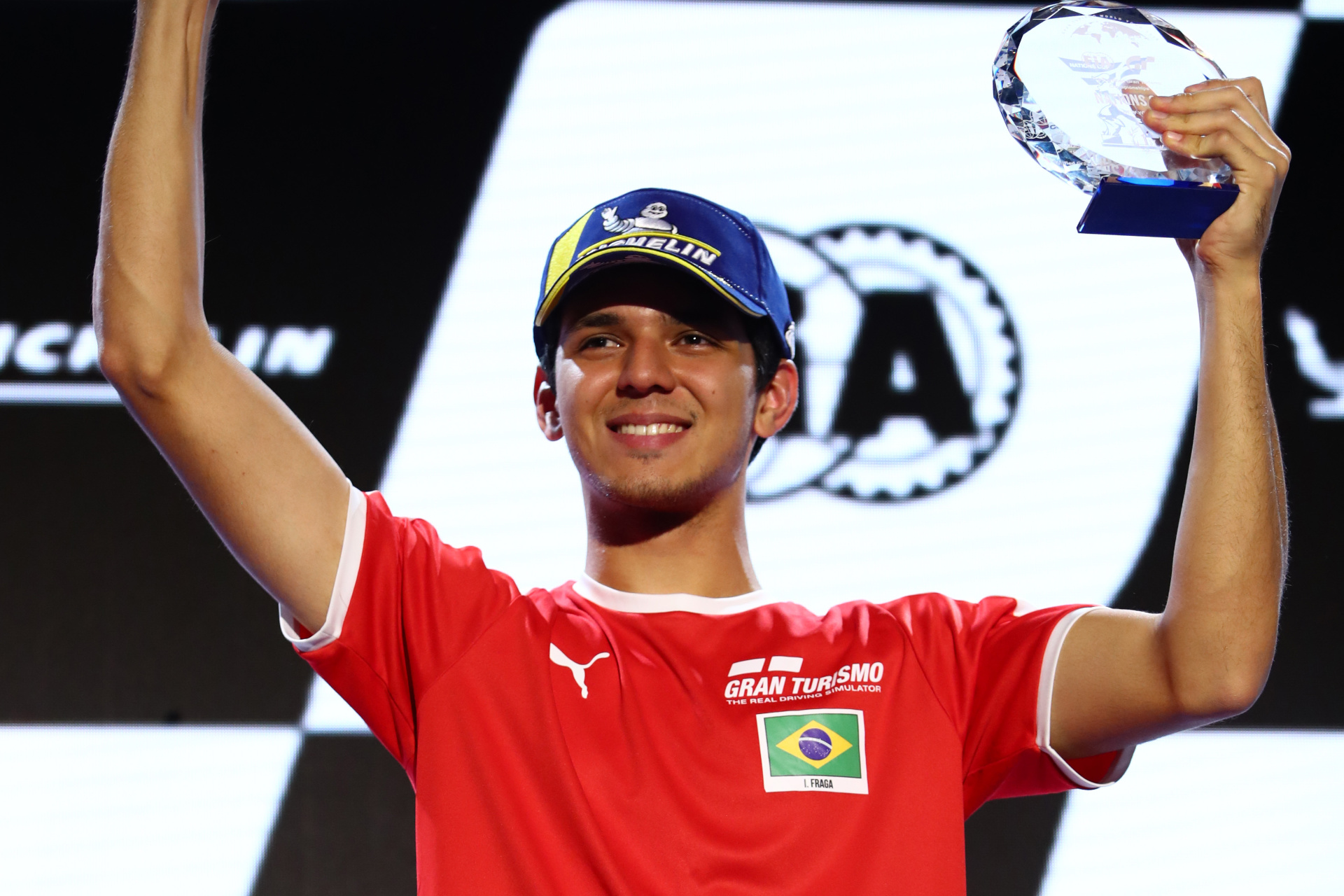 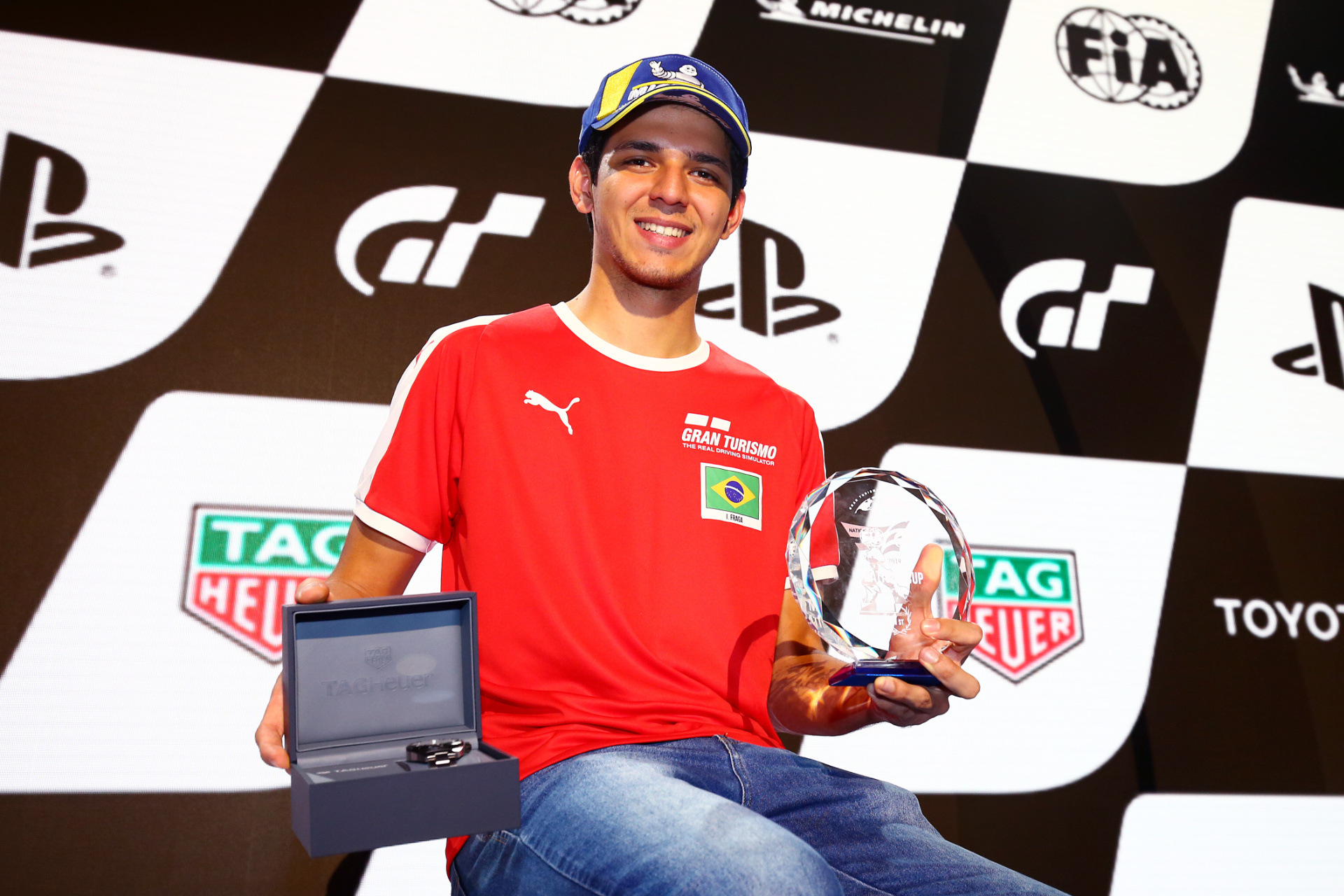