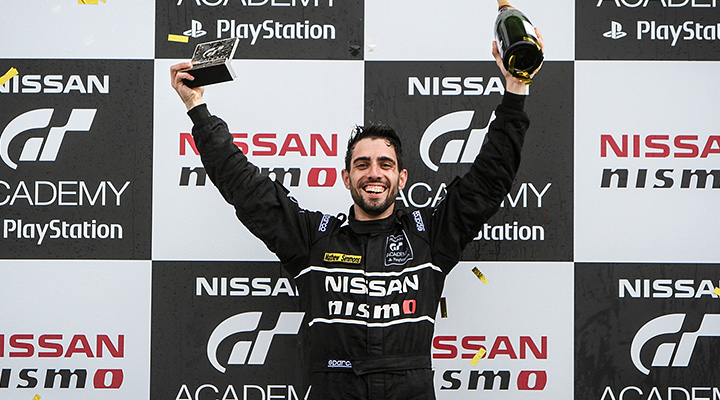 Matt Simmons beat 29 Race Camp finalists to win the coveted GT Academy International 2015 winner’s trophy and in doing so took a step closer to his boyhood dream of becoming a professional racing driver.

Like so many young boys, Matt loved anything that had four wheels and went fast. He grew up watching an incredible era of Formula 1 and hoped that one day he could emulate the legends he saw on TV. In 2011 he attended his first motorsport event, the prestigious V8 Supercars Bathurst 1000 race.

Matt couldn’t afford karting when he was younger, a traditional route in to motorsport, and so sought enjoyment playing Gran Turismo. In 2014, when GT Academy opened its doors to Australia for the first time, he jumped at the opportunity to enter. Matt qualified for national finals via the online process but unfortunately didn’t make it to Race Camp. Undeterred by this setback, Matt decided to dedicate the next 12 months to preparing for GT Academy 2015. He changed job to allow himself more time to focus on his fitness, track days and simulator training and also joined a karting endurance series to improve his race craft. The hard work paid off; he made it to International Race Camp at Silverstone in the UK.

Having impressed the instructors, the Australian mentor Rick Kelly, and head judge Rob Barff during the six-day Race Camp, Matt was selected as his country’s representative for the final race. Australia had secured pole position as a result of winning a thrilling Nissan Micra stock car race the evening before. Matt drove exceptionally well during the final, exchanging first place with drivers from the USA and Turkey on numerous occasions before cementing first place on lap five, only to encounter a mechanical problem and drop back to third, where he finished. After a long deliberation between the judges and having taken in to account Matt’s early race place and fastest lap, he was announced as 2015 GT Academy International champion.

Matt has since embarked on his Driver Development Programme (DDP) with NISMO and as a result obtained his International C Race Licence. For 2016 he will race in the Blancpain Endurance Series with Nissan GT Academy Team RJN in the Nissan GT-R NISMO GT3.