At 6pm local time on the 10th of June, 2013, the PlayStation® E3 Press Conference was held and the latest news regarding Gran Turismo 6 was released. Below you can find an overview of what was announced:

Gran Turismo 6 will feature a huge number of the world’s most popular cars, including the latest and greatest machines from the exciting FIA GT3 category. The cars shown at E3 2013 include the following:

With an extremely narrow front end and a wide rear end, this car’s revolutionary triangular styling has sent shockwaves through the racing car design world. After appearing for the first time in the 2012 LeMans 24 hour race, the car also participated in the Petit LeMans at Road Atlanta of the U.S., where GT Academy Winner Lucas Ordóñez and his fellow drivers achieved 5th place overall, proving the potential of this concept beyond doubt.

Gran Turismo has followed the development process of this car from the introduction of the camouflaged Test Prototype, to the pre-production Final Prototype. And at E3 2013, the production model will finally make its appearance. Drive and enjoy the new Stingray that will soon be delivered to eagerly awaiting Corvette fans around the world.

BMW introduced this car in the FIA GT3 category after the great success of the M3 in races all over the world. Based on the production Z4, the car has been made lighter, the centre of gravity has been lowered, the tread width widened and the aerodynamics improved. The engine is a 4 litre V8 that carries the DNA of the legendary M3. Its long nosed, short deck proportions and aggressive facia give this car the visage of a true fighting machine.

The SLS AMG GT3 achieved its first victory in the Nürburgring 24 hour race in 2013. While keeping the dedicated SLS AMG aluminium space frame and 6.3 litre V8, modifications have been made to make it a racing machine meeting FIA GT3 regulations. Its unique pulsating exhaust sound gives another special flavour to the car which inherits the gull wing doors of the legendary 300SL.

This is the racing machine that Kazunori Yamauchi, producer of the Gran Turismo series, drove in the 2013 Nürburgring 24 hour race. Though based on the production car, the tread width is greatly expanded, with its drive train changed from four wheel drive to rear wheel drive, shedding a lot of weight in the process. It was the first Japanese car in Nürburgring history to lead for a sustained period during qualifying, showing its extremely high potential as a racing car.

This is a GT3 machine born from the R8, Audi’s flagship sports car. Their famous Quattro system has been shelved for this model to adopt a midship rear wheel drive drivetrain. The performance of the ultra version has been greatly enhanced by a number of improvements, including changing the door panels to carbon and upgrading the exhaust and aerodynamics. Car #3 is the car of Team Phoenix, and is the champion machine of the 2012 Nürburgring 24 hour race.

At E3 2013, new locations included in Gran Turismo 6 were also revealed. Here are the three locations that were introduced at the show: 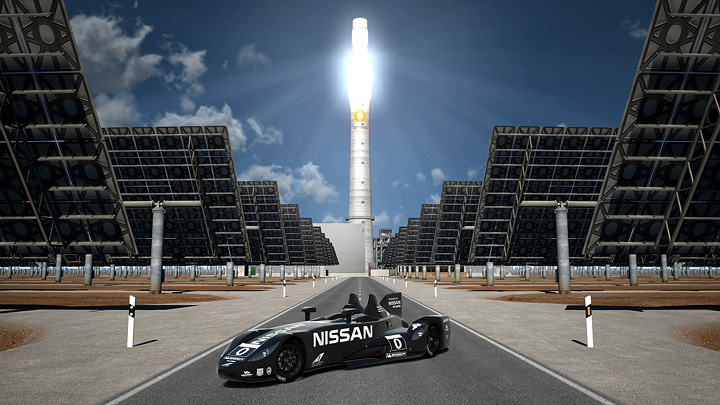 Gemasolar is a massive concentrated solar power plant located in Seville, Spain. A total of 2650 reflector mirrors that are each 9 metres tall and 12 metres wide are arranged in a circular layout, and the facility generates enough electricity to power 25000 homes. This expansive facility covers an amazing 185 hectares (approximately 457 acres) of land, making it a particularly scenic spot in Gran Turismo. This is a truly unique location where the utilization of limitless natural energy is visualized on a colossal scale. 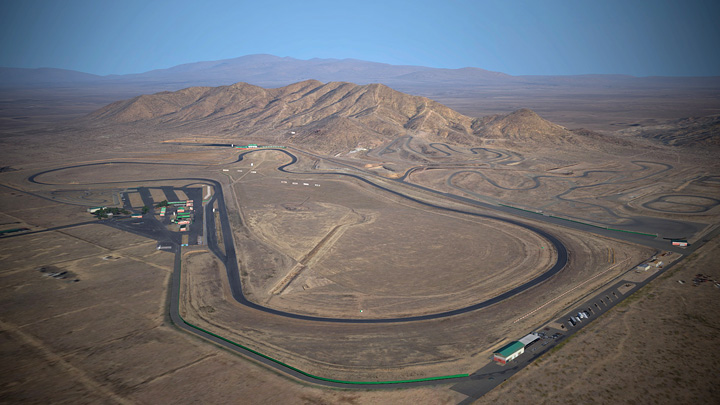 This famous circuit in California is now reaching its 60th anniversary, and is finally making an appearance in Gran Turismo. The Willow Springs International Raceway is a circuit that is located in a hilly region just outside of Los Angeles. Of its many layouts, the circuit we are introducing this time is the main course, the “Big Willow”. At 2.5 miles per lap, it is known for its high speed corners and undulating terrain. 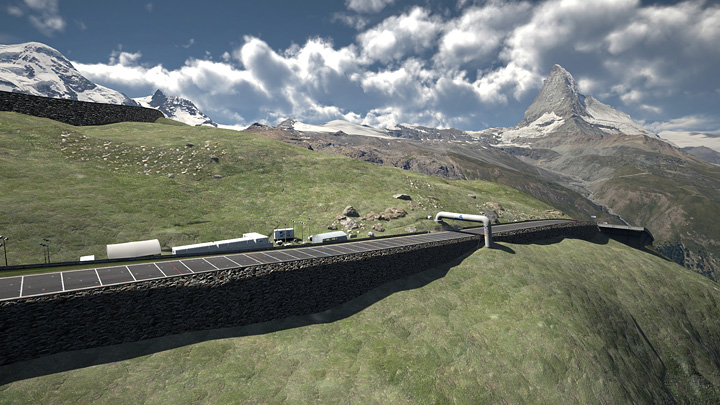 This is an original track that has been created in the vicinity of the Gornergrat station, which is known for its incredible view of the Matterhorn. This is a mountain course with steep climbs and sharp drops, located at an elevation of over 3000 metres. A sheer rock face follows along the track, but the width of the course is wide enough for overtaking. The sight of the European Alps as you cross over the hill here is simply spectacular. We hope everyone will enjoy the sheer scale of the nature around the track when driving this course.

At E3 2013, the “GT6 Concept Movie #2 2013 E3” was released, showing the highlights and new evolutions made in Gran Turismo 6. In addition to the new cars and tracks introduced above, the movie also shows the progress that was made possible in simulation thanks to collaborations with technical partners such as the Yokohama Rubber and KW Automotive, as well as the evolution of the graphic engine.

The physics model which dictates car dynamics has been renewed completely. Load changes of the car, changes in vehicle attitude, relationship of the surface and the tyres are even more real now, and players familiar to the game will immediately feel the new depth in drive feel the first time they turn the steering wheel.

With the help of our technical partner, the Yokohama Rubber, a new tyre model has been introduced that reflects the tyre compound, tyre structure, and changes in characteristics under extreme load conditions.

In collaboration with German suspension manufacturer KW Automotive: the precision and reality of the model representing shock absorbers which governs the drive feel of cars, has improved significantly.

The down force, lift and air resistance – which continually changes according to the shape of the car – changes in vehicle attitude and its relationship with the ground surface, have all been recreated to a level of precision never seen before. Keen players will probably start to feel the airflow around the car as they drive.

Adaptive tessellation is next generation technology in terms of 3D model rendering. Tessellation involves dividing a polygon into multiple geometric tiles, and in adaptive tessellation, the polygons will automatically divide and become finer according to the viewing distance and position. This makes it possible to maintain the quality of the renders very high whether you are close or far from your viewing object.

In order to more accurately express the wide dynamic range of real life scenery, the HDR dynamic range in Gran Turismo 6 has been made 50 times greater than that in GT5. This prevents over flaring of highlights and black outs in shadows caused by extreme differences in brightness. It also allows natural blurring effects, better motion blurring which increases dynamic motion effects, and makes the sparkle of lighting more realistic, immersing the player in a truly absorbing atmosphere.