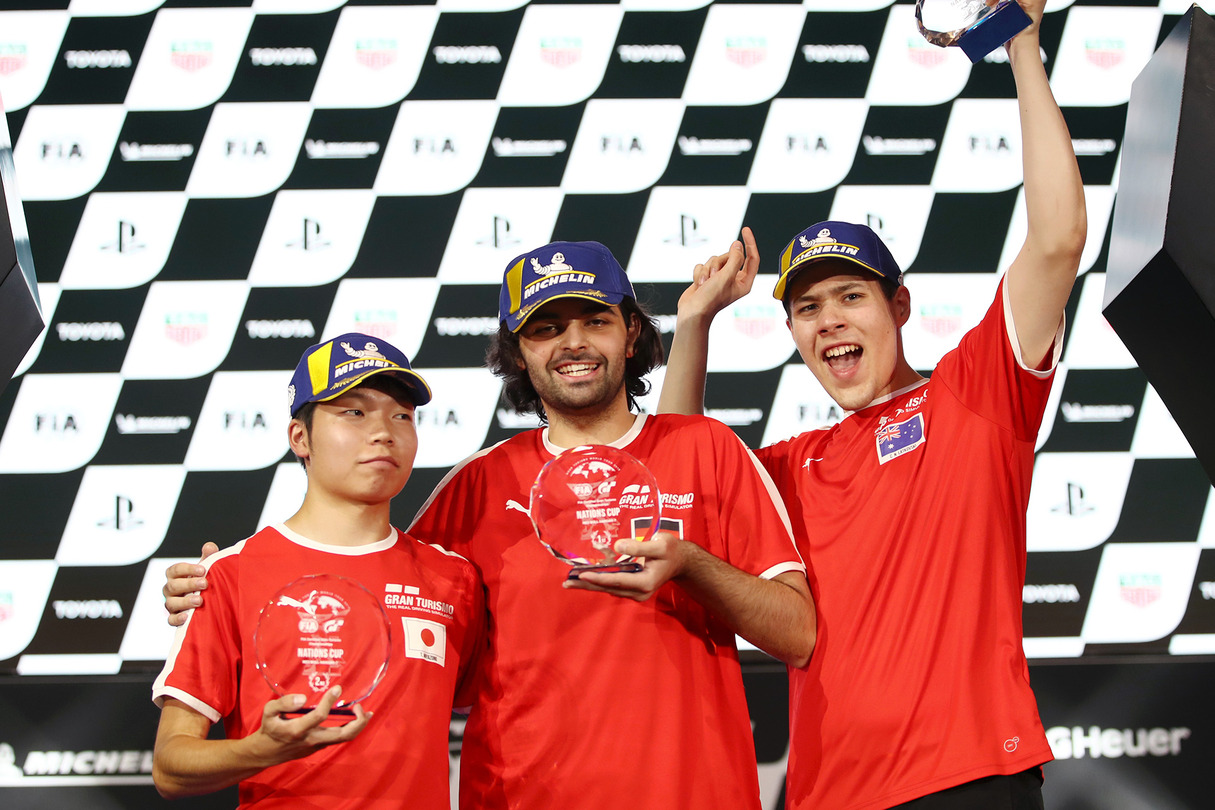 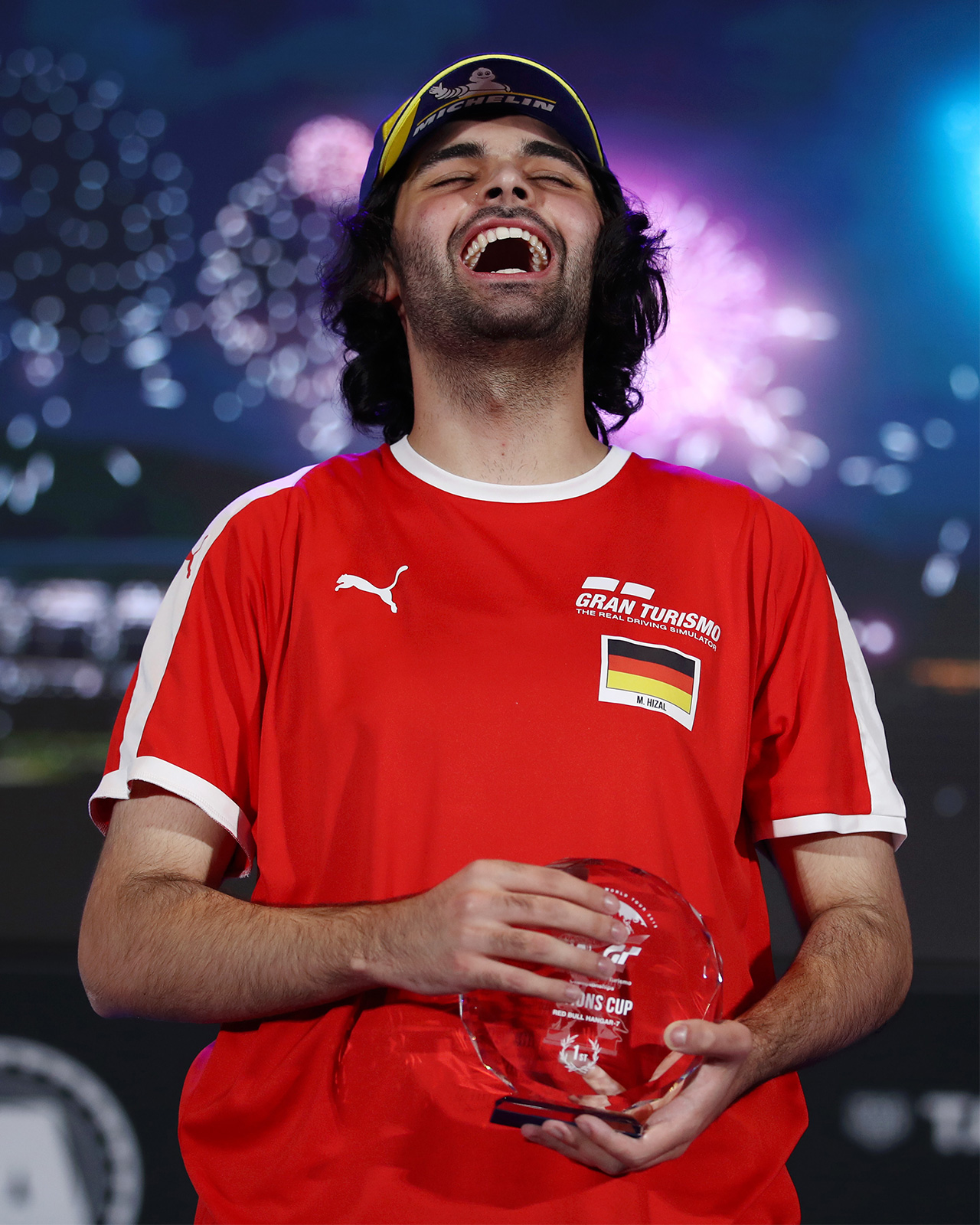 Salzburg, AUSTRIA (September 14, 2019) – After a compelling start to "World Tour - Red Bull Hangar-7" the previous day with the Manufacturer Series, the action concluded today with the Nations Cup, where 24 of the world’s top players competed for a seat at the World Finals in Monaco on November 23 and 24. With the spectacular backdrop of exotic airplanes and Formula 1 machines inside Red Bull’s Hangar-7, the drivers were at it early, competing in a general qualifying session, followed by the Top 6 Qualifying, two Semi-final races, a Repechage round and the Nations Cup Grand Final. In the end, it was Mikail Hizal of Germany who stood at the top of the podium, finally getting that victory that had eluded him all season. 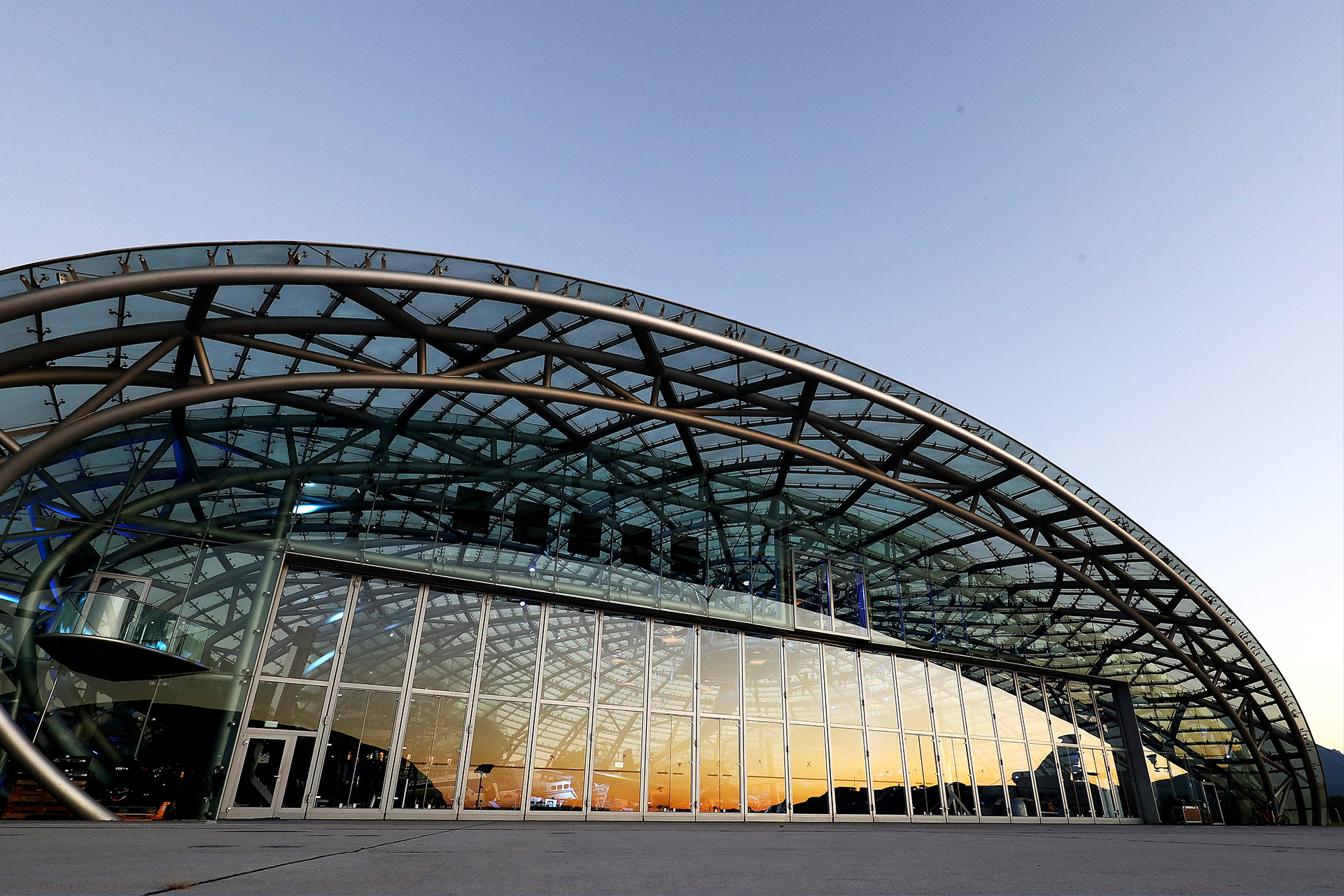 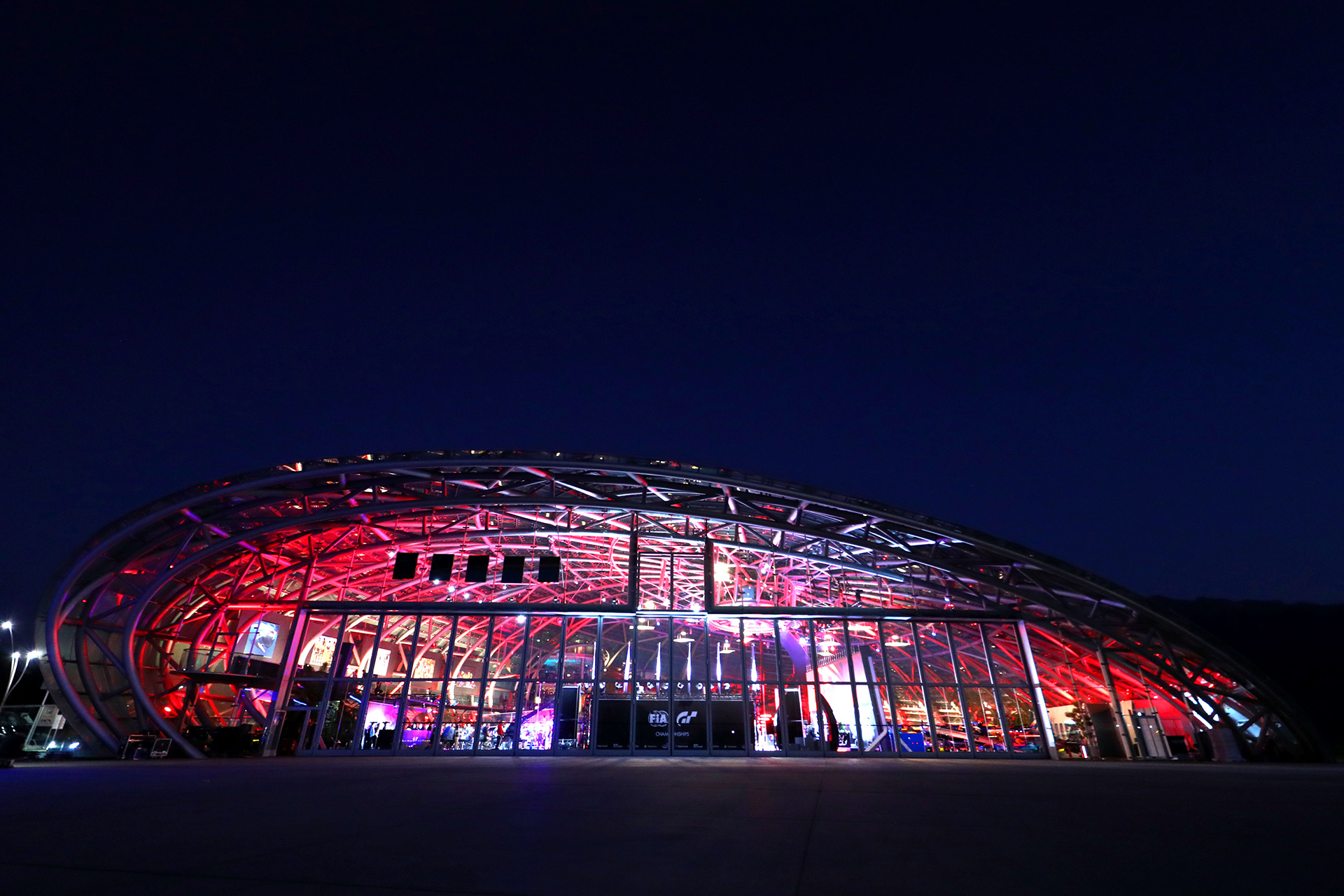 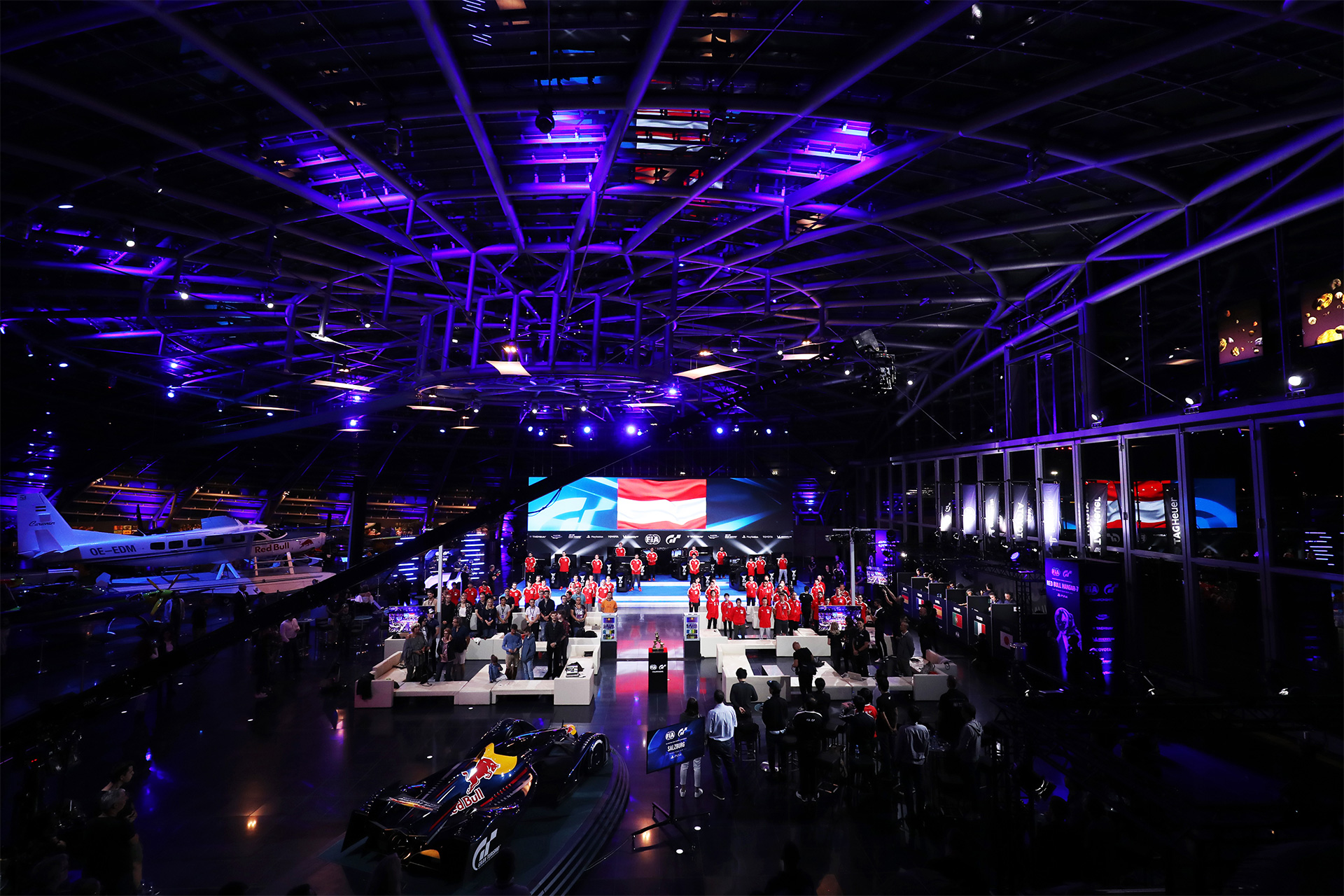 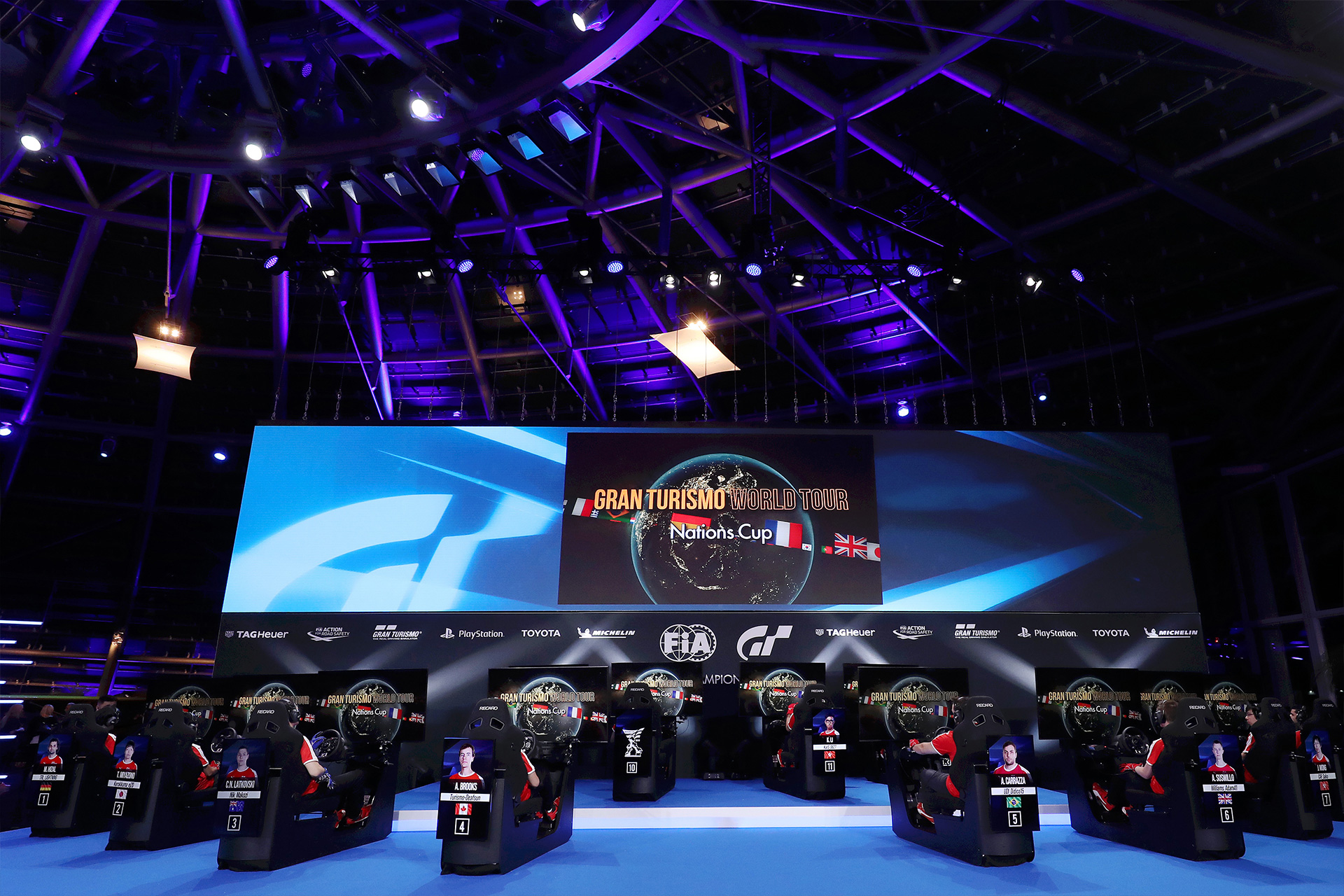 Semi-final A was a 12-lap sprint around the Circuit de Barcelona-Catalunya in the Bugatti Vision Gran Turismo Gr.1, where all the drivers were required to use both soft- and medium-compound Michelins, thus requiring at least one pit stop. The top four finishers here would advance to the final race at the end of the day, while those in 5th to 10th place were awarded a second chance via the Repechage round. As for the last two finishers, it was "auf weidersehn."

Right at the start, Cody Nikola Latkovski of Australia, starting in the number-two position, jumped all over Hizal, trying to beat him out of the first corner, which he did, but Hizal, who was driving with a broken toe, maintaining his composure and his racing line, took the lead right back. Soon after, it was Latkovski’s turn to feel the pressure as Brazil’s Adriano Carrazza came up on him through Turn 12 and wrested away 2nd place; however, the race stewards ruled that Carrazza had intentionally hit Latkovski and assessed the Brazilian with a one-second penalty that resulted in giving back the position. The next five laps saw little drama, as the running order remained unchanged, with the top four consisting of Hizal, Latkovski, Carrazza and Baptiste Beauvois (France), all running on soft-compound tires.

On Lap 5, those who started the race on medium-compound tires pitted, swapping them for the soft-compound rubber, including Jonathan Wong and Kin Long Li of Hong Kong, Ryota Kokubun of Japan, and Nicolás Rubilar and Fabian Portilla of Chile. But it was too little too late, as Hizal had opened up a five-second lead on the competition by this time.

Wong, who started 6th, made a nice move to pry away the all-important 4th position from Beauvois and began pressuring the 3rd-place car of Carrazza, who was on the medium-compound tires, but the Brazilian was determined to not let Wong get by. Latkovski pitted on Lap 7, after squeezing as much as he could from the soft Michelins, but ultimately could not pry the lead away from Hizal, who cruised to the checkered flag without breaking a sweat. Hizal crossed the finish line more than five seconds ahead of Latkovski, as Carrazza and Wong, who came in 3rd and 4th, respectively, rounded out the top four and an automatic place in the final. 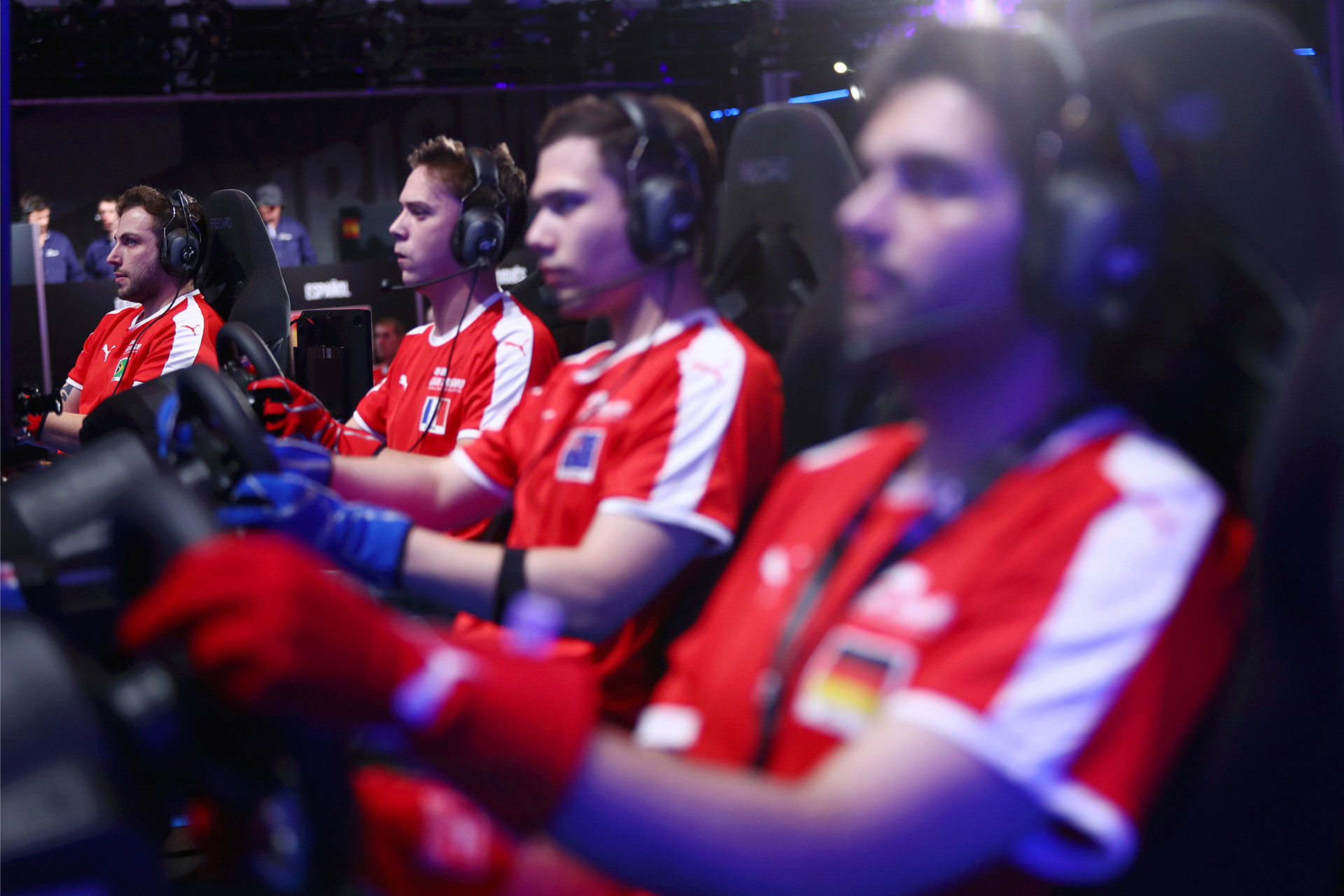 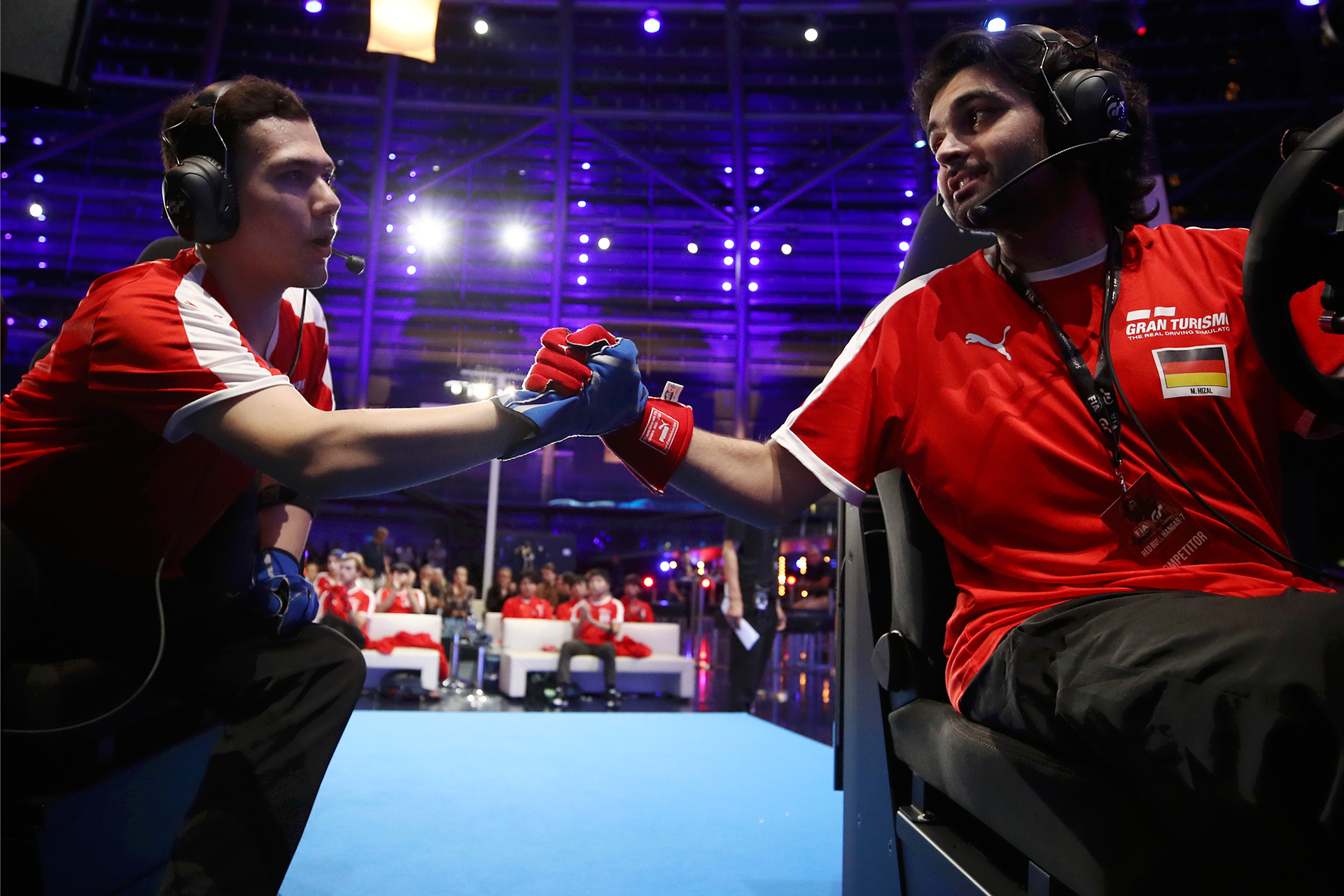 With the favorite, Mikail Hizal, already in the front row of the finals, it was now up to the day’s top qualifier, Takuma Miyazono (Japan), to show his stuff in the second Semi-final race, a nine-lap sprint in the Pagani Zonda R around his home track, the Tokyo Expressway East Outer Loop. The race organizers decided to make things extra interesting by making the competitors run in extremely wet conditions.

There was plenty of action right off, as Miyazono, Derrouiche (France), and Suswillo (UK) made a mad dash for turn one, going three-wide at one point. Derrouiche got the upper hand, grabbing the lead from Miyazono, but the Japanese driver was able to take it back through the Turn 3 sweeper. Intense wheel-to-wheel action ensued as a number of cars brushed against the wall, literally sending sparks flying in the air, but after such an eventful first lap, the running order remained unchanged: Miyazono, Derrouiche, Suswillo and Andrew Brooks (Canada).

At the start of lap two, Miyazono made an uncharacteristic mistake, going wide into Turn 1, which resulted in him dropping to 3rd place, after Derrouiche and Suswillo passed him. Then on the following lap, Suswillo took the lead away from Derrouiche. Miyazono also got by the Frenchman, and then set his sights on reclaiming the lead from Suswillo. Elsewhere, Salvatore Maraglino of Italy quietly worked his way up from 8th to 5th place, just one position from claiming his automatic pass to the final.

As Miyazono pulled away from the pack, extending his lead to more than two seconds in a matter of two laps, an intense battle for P2 through P6 was unfolding between Suswillo, Derrouiche, Brooks, Maraglino and Coque López (Spain). On Lap 7, Derrouiche committed a serious driving error when he went wide through T1, allowing Brooks to sneak past the Frenchman. With his driving rhythm totally disrupted, Derrouiche went wide through the next corner, letting Suswillo through, and then allowing López to get the best of him the next lap, surrendering the all-important 4th position. 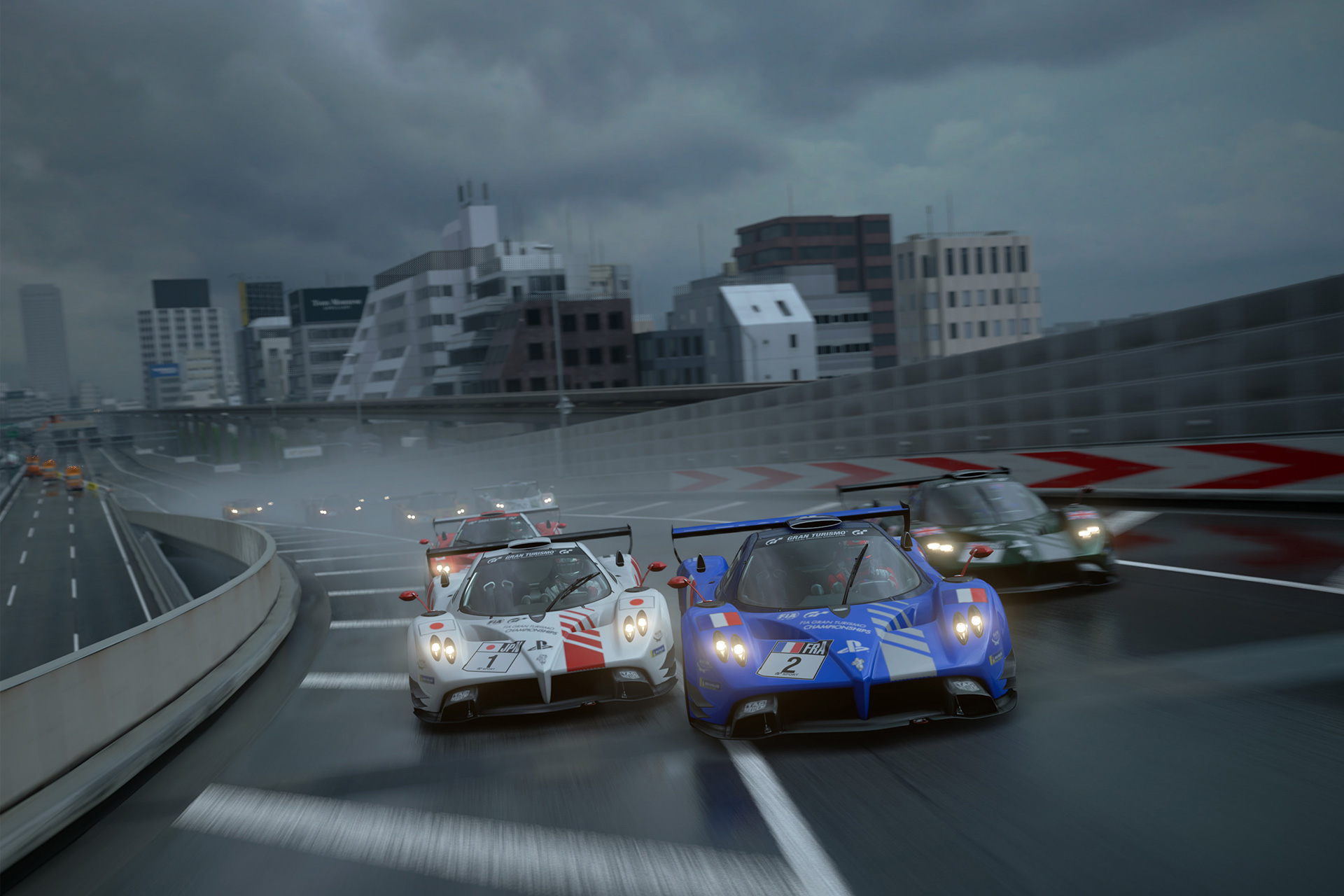 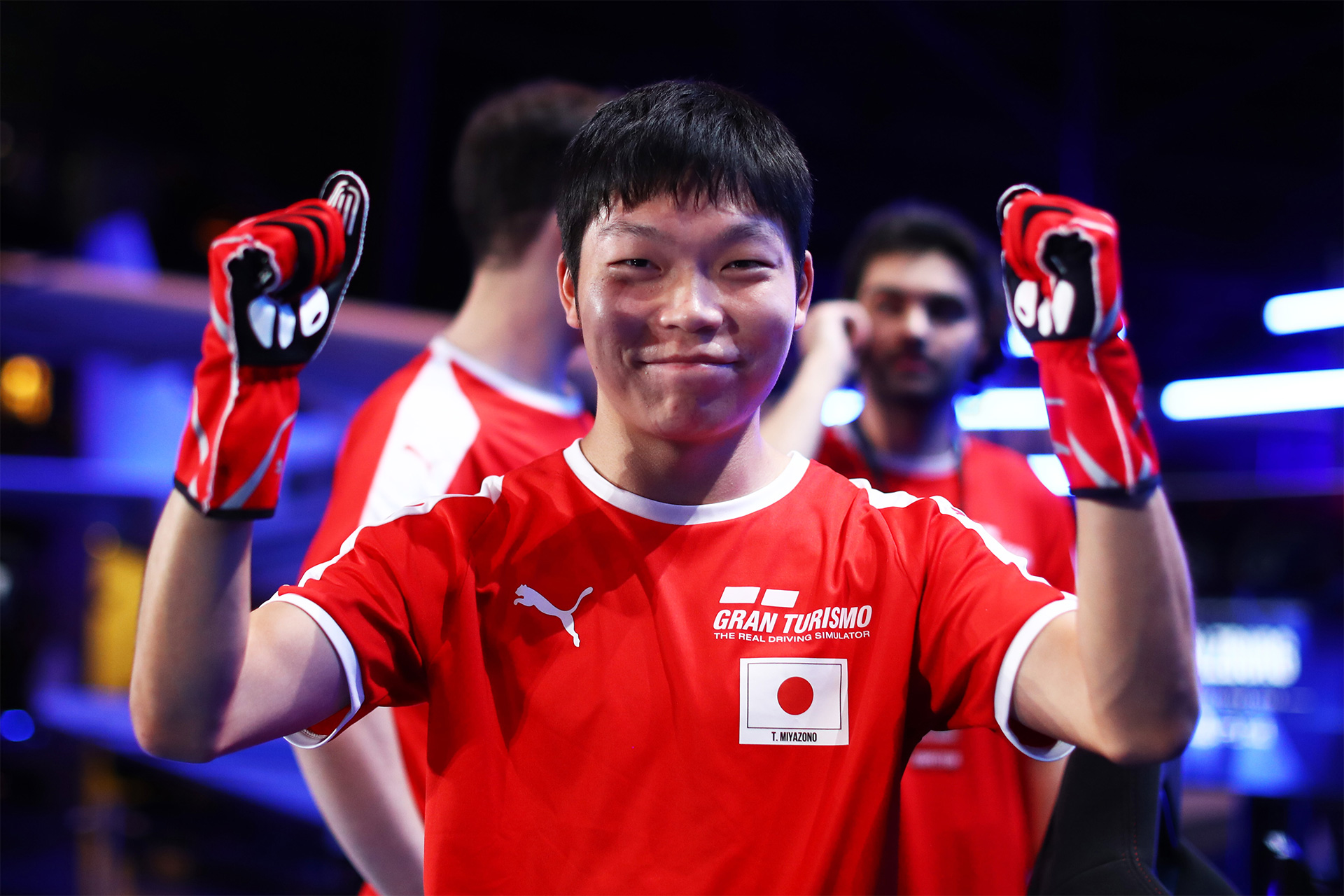 While you can almost be guaranteed a scrappy contest in the Repechage round, this particular contest—a 10-lap race around the off-road Sardegna-windmills track in Gr.B cars—was uncharacteristically drama-free. The top four starters ended up maintaining their positions throughout the contest, with Baptiste Beauvois of France going from pole position to checkered flag for the win, as he brilliantly slid his Subaru WRX Rally Car around the slippery dirt track under dark conditions. Countryman Rayan Derrouiche performed brilliantly, too, keeping his Mitsubishi Lancer Evolution Final out of trouble making it a French 1-2. Hong Kong’s Kin Long Li, driving a Nissan GT-R Rally Car, and Salvatore Maraglino of Italy, piloting a Honda NSX Rally Car, kept a firm hold of 3rd and 4th place, as they pulled away from the rest of the pack by more than 10 seconds, allowing them to advance to the final. 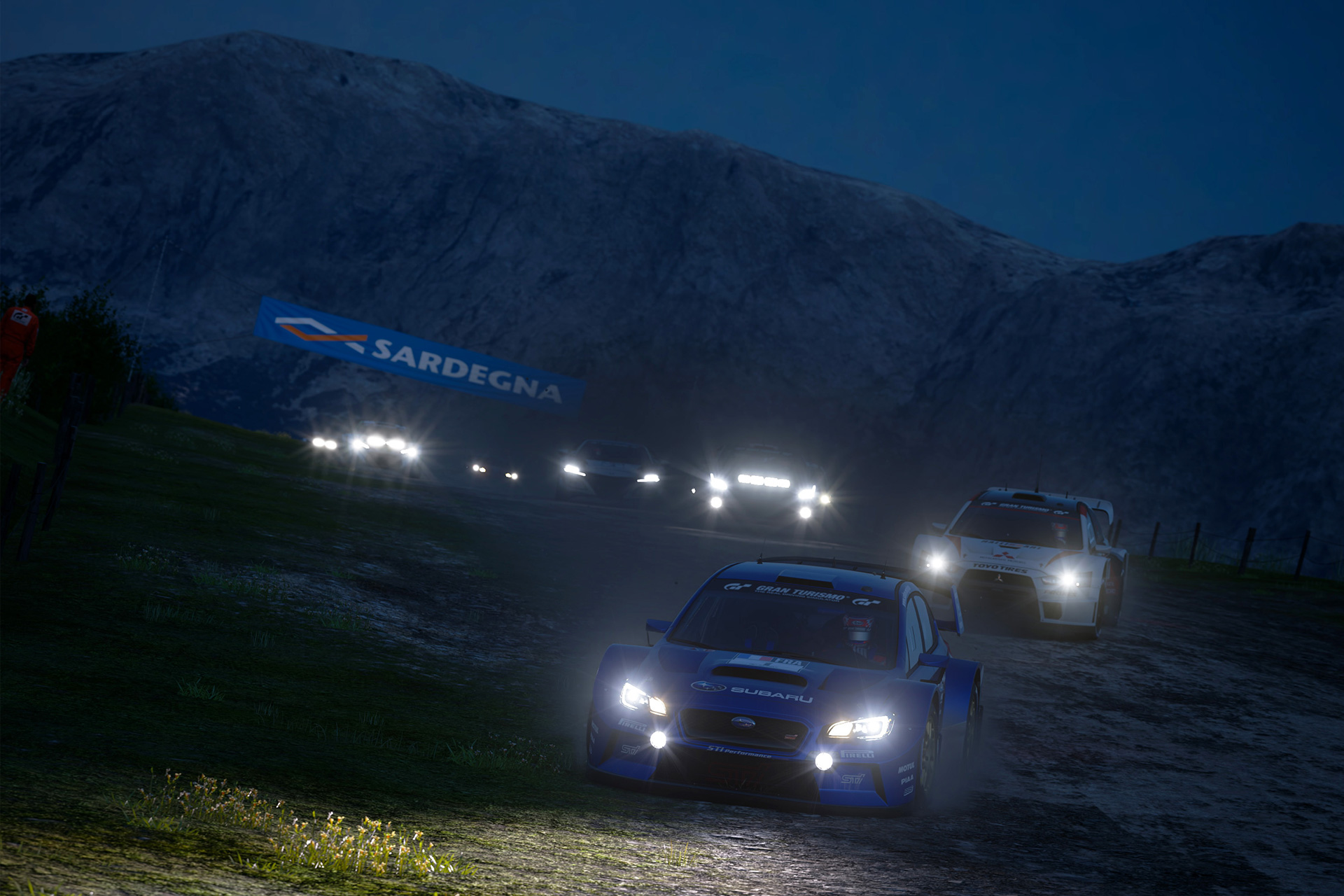 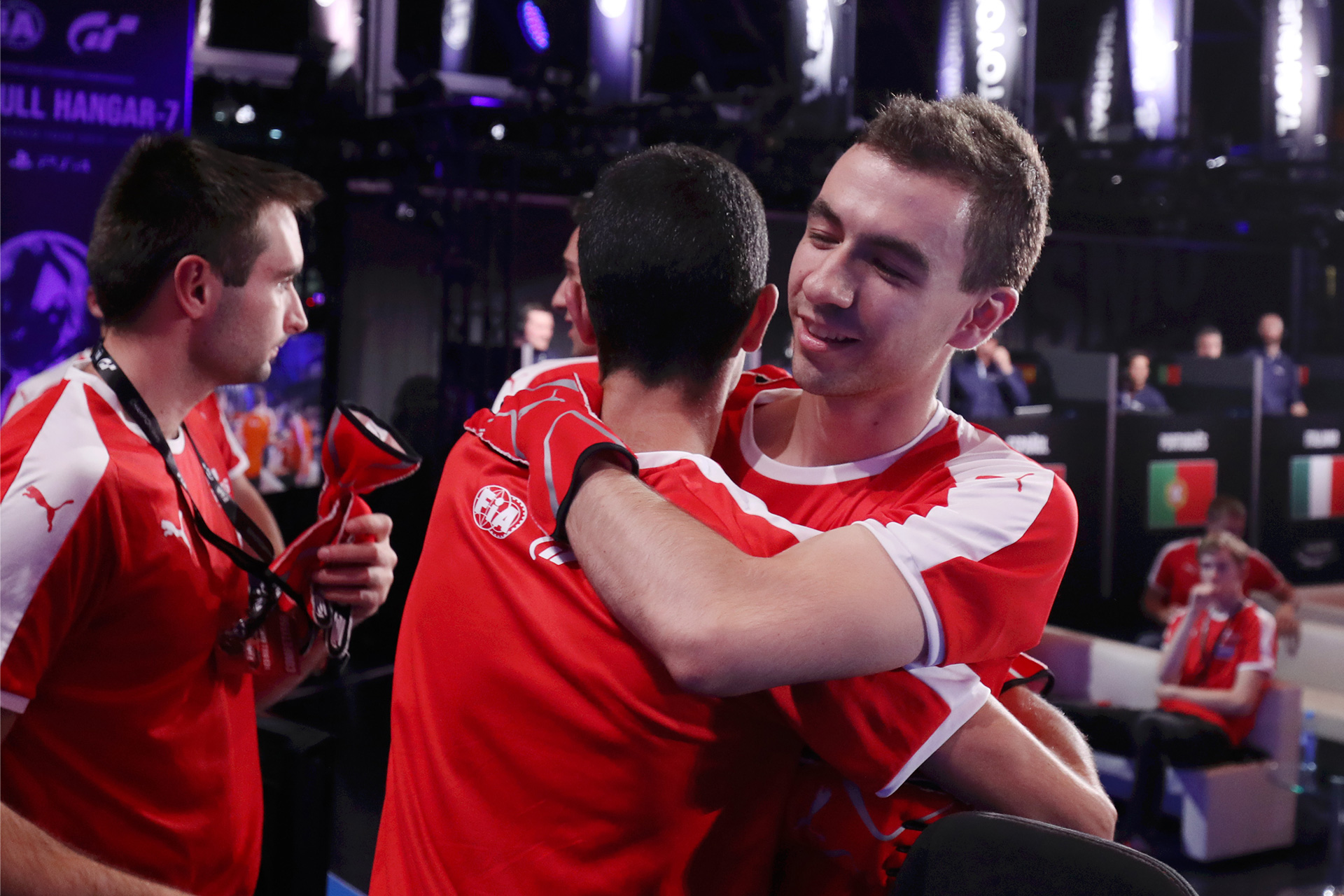 After tallying the results of the previous races, it was Mikail Hizal (TRL_LIGHTNING) who sat on pole for the 20-lap Nations Cup Final held at Autodromo Nazionale Monza, with Takuma Miyazono (Kerokkuma_ej20) alongside him. The drivers, piloting the Red Bull X2019 Competition, were required to use all three compounds of Michelin tires (soft, medium, and hard), which meant that they would need to make at least two pit stops.

The green flag dropped with the three leaders, Hizal, Miyazono and Cody Nikola Latkovski all running on soft-compound tires while nearly all of the other drivers opted for the harder rubber. Miyazono attempted to pass Hizal on the first corner, but in doing so, went off the track slightly, allowing the German to stretch his lead to more than a second halfway through Lap 1. 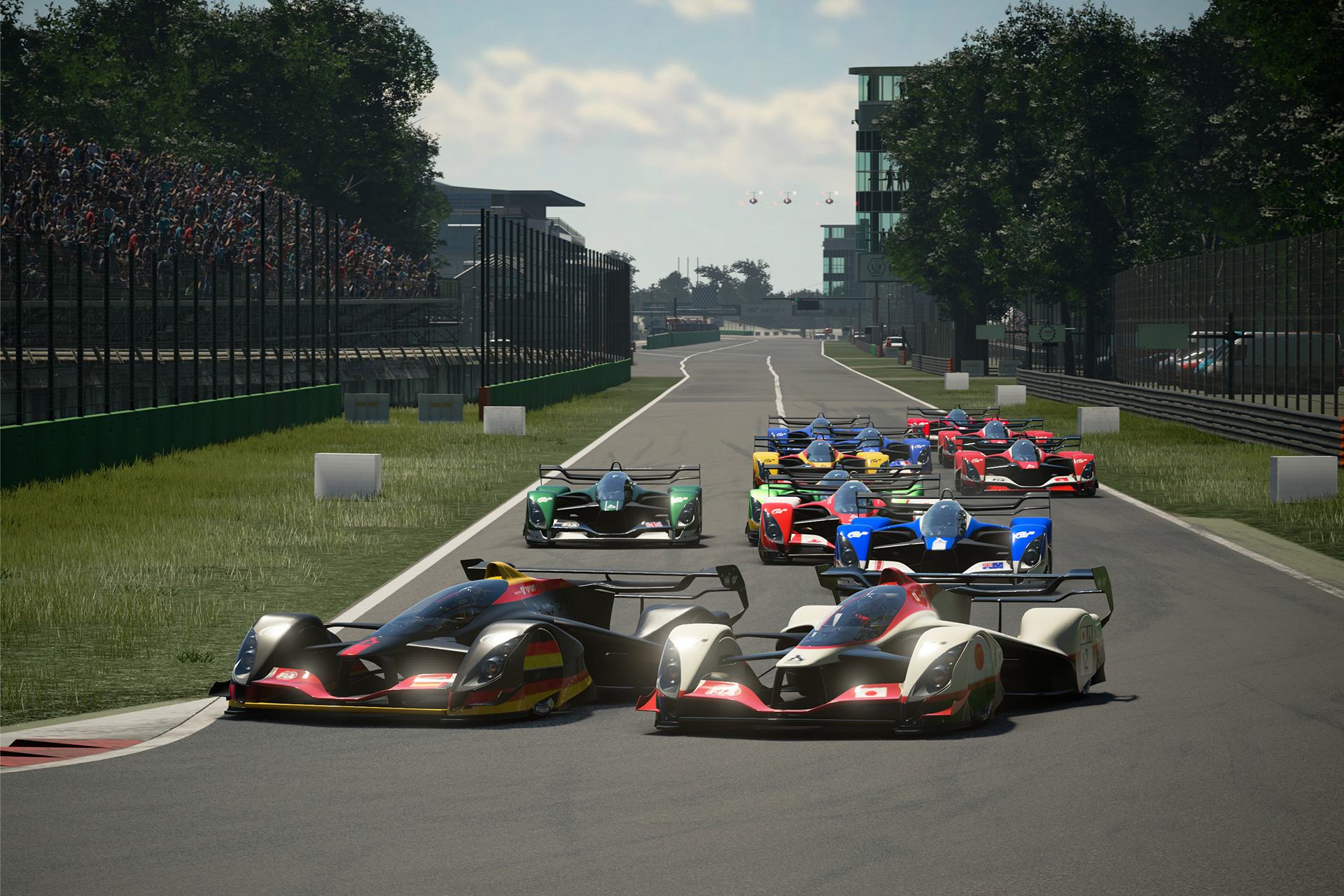 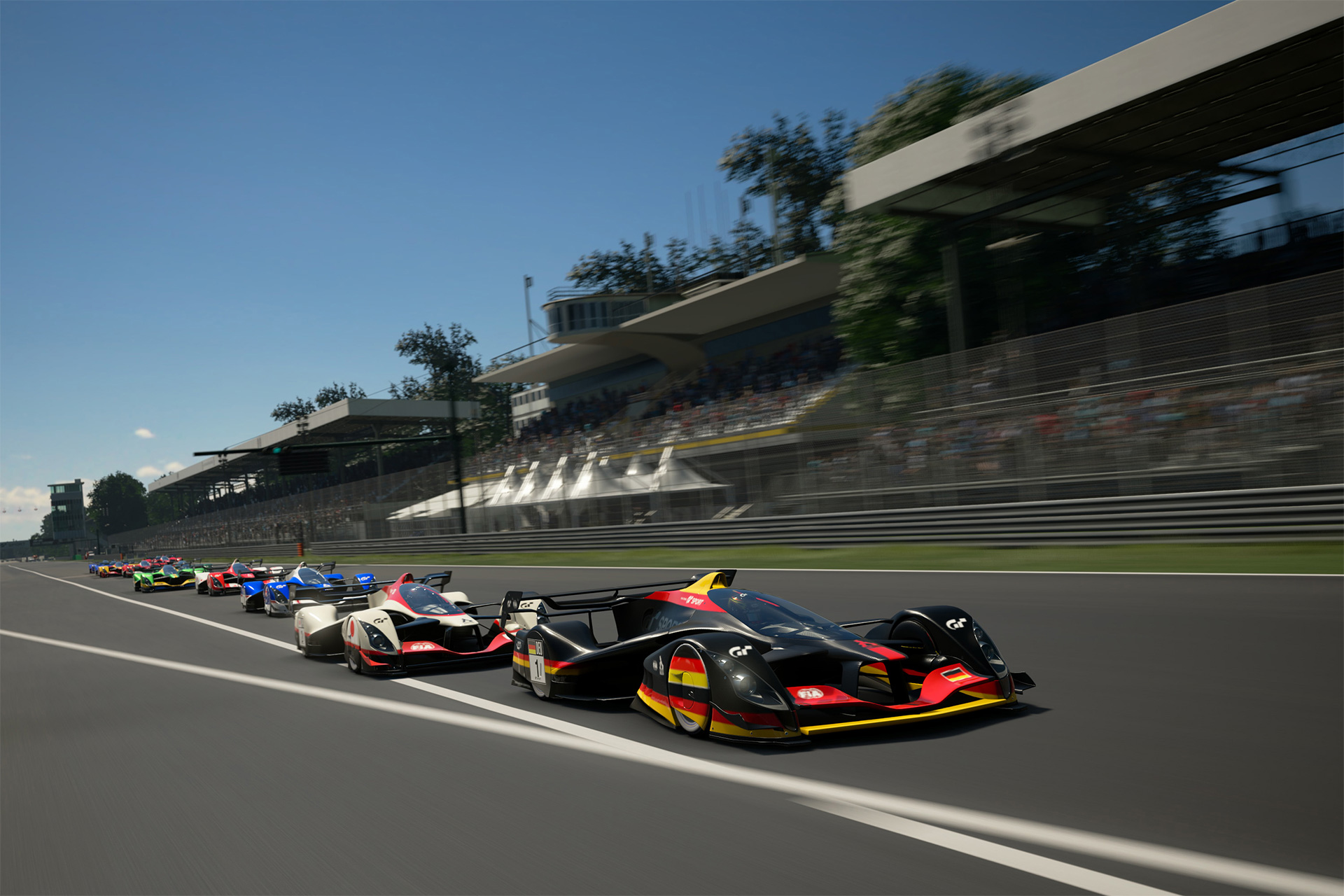 At the start of the second lap, nearly all the cars on hard-compound tires dove into the pits to switch to mediums, after fulfilling the one-lap requirement to use each of the three compound tires. With the stickier medium-compound tires, Coque López (Williams_Coque14) started to make his move, as he reeled in Adriano Carrazza (UDI_Didico15) and passed him on the back straight to take 5th place. Andrew Brooks (Turismo-Deafsun), also on medium-compound rubber, executed a brilliant pass against Salvatore Maraglino (JIM_Pirata666_) after working his way up the field from 12th place.

On Lap 8, the 3rd-place car of Latkovski came into the pits, swapping his worn soft-compound tires for hard-compound ones, then returning to the track without giving up his position. But he had allowed Adam Suswillo (Williams_Adam41), who was running on the quicker medium-compound Michelins, to close the gap, and for the next few laps, he had his hands full keeping the Brit at bay.

The race leaders, Hizal and Miyazono, made their first pit stop on lap nine, switching from softs to mediums, but unlike Hizal, Miyazono decided to forego fueling, allowing for a quicker pit stop and returning to the track with the lead. So, at the halfway point of the race, it was Miyazono and Hizal running 1-2, a full nine seconds ahead of the 3rd-place car of Latkovski.

On Lap 12, Latkovski, still running in 3rd and employing a three-stop strategy, made his third pit stop, switching to the soft-compound tires. Although he returned to the track in 6th, he regained 3rd place when on Lap 14, Brooks and Maraglino pitted. All the while, race leaders Miyazono and Hizal had opened up a 30-second lead on the rest of the field, but they still needed to complete a stint on the hard-compound tires.

Lap 15 saw the only major accident of the race when Derrouiche and Wong touched as they battled for 5th position, sending Wong off the track. This led to Brooks losing control and spinning his Red Bull X2019, essentially knocking him out of contention.

Up ahead, Miyazono made his last pit stop, taking on the hard-compound tires and much-needed fuel. The cool and steady Hizal decided to stay out for an extra two laps, building up a comfortable lead, one that he would not surrender even after a pit stop on Lap 18. After returning to the track following his final pit stop, he led Miyazono by nearly seven seconds, which proved more than enough to hand the German his first win of the series and a ticket to the World Finals… And all with a broken toe. 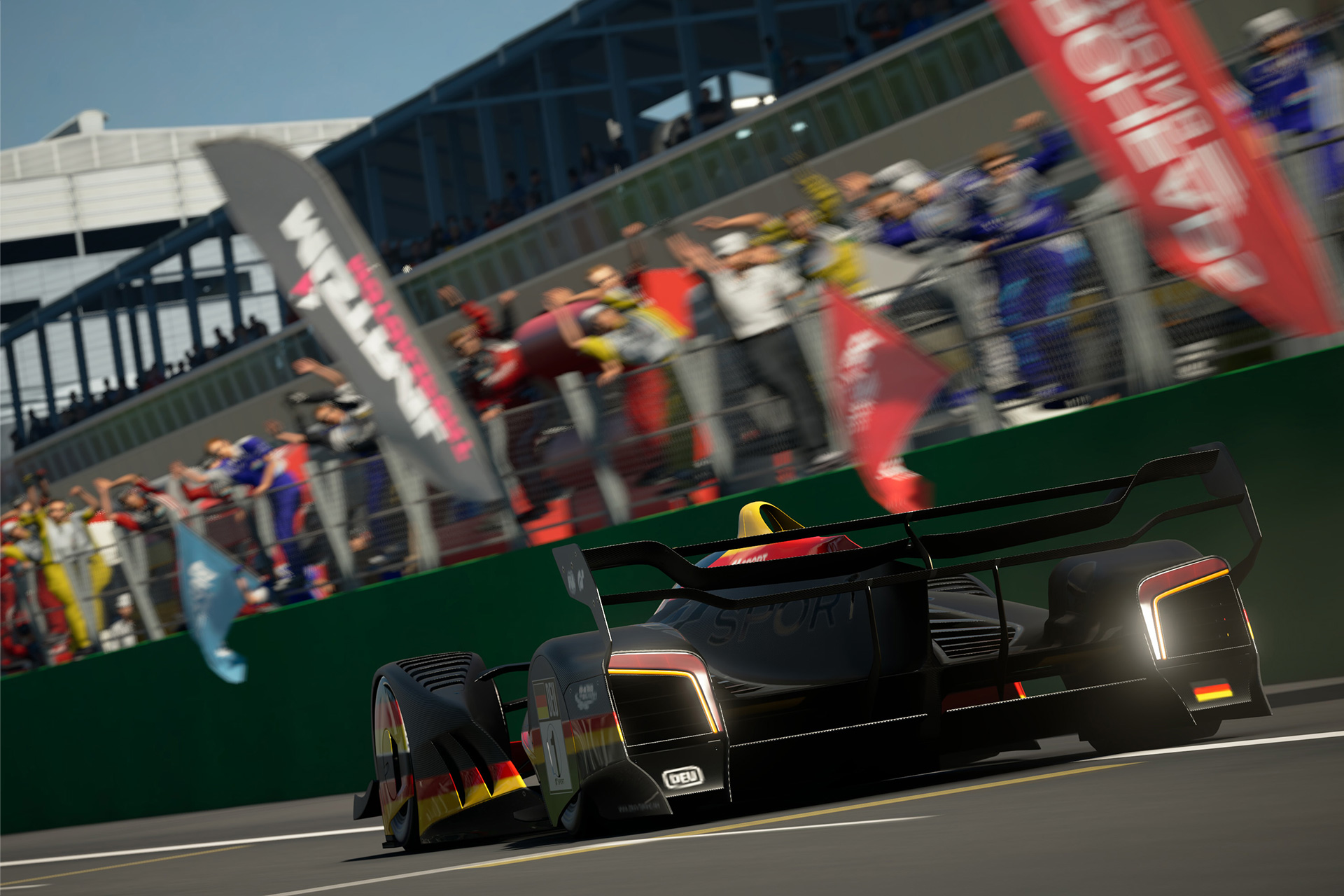 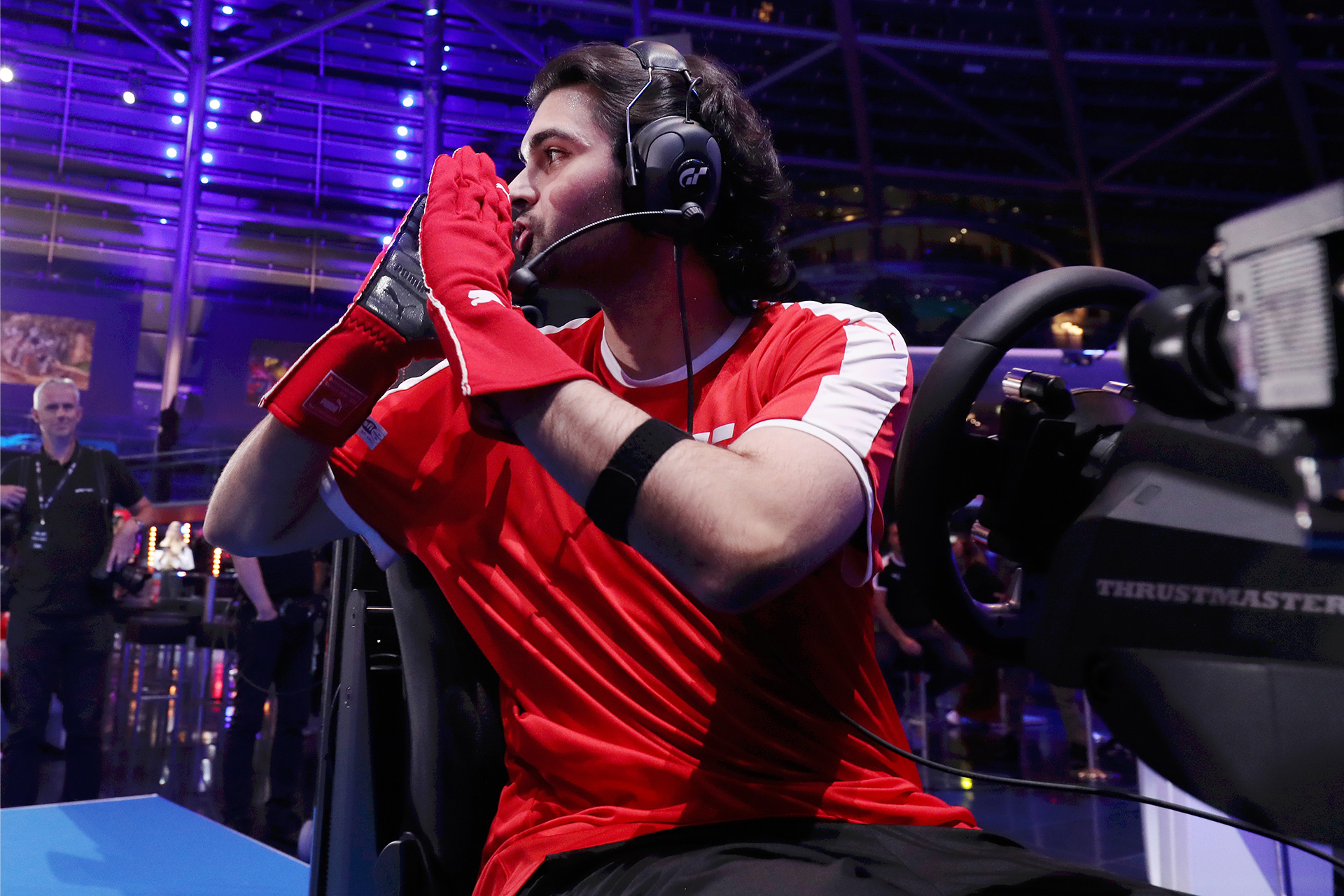 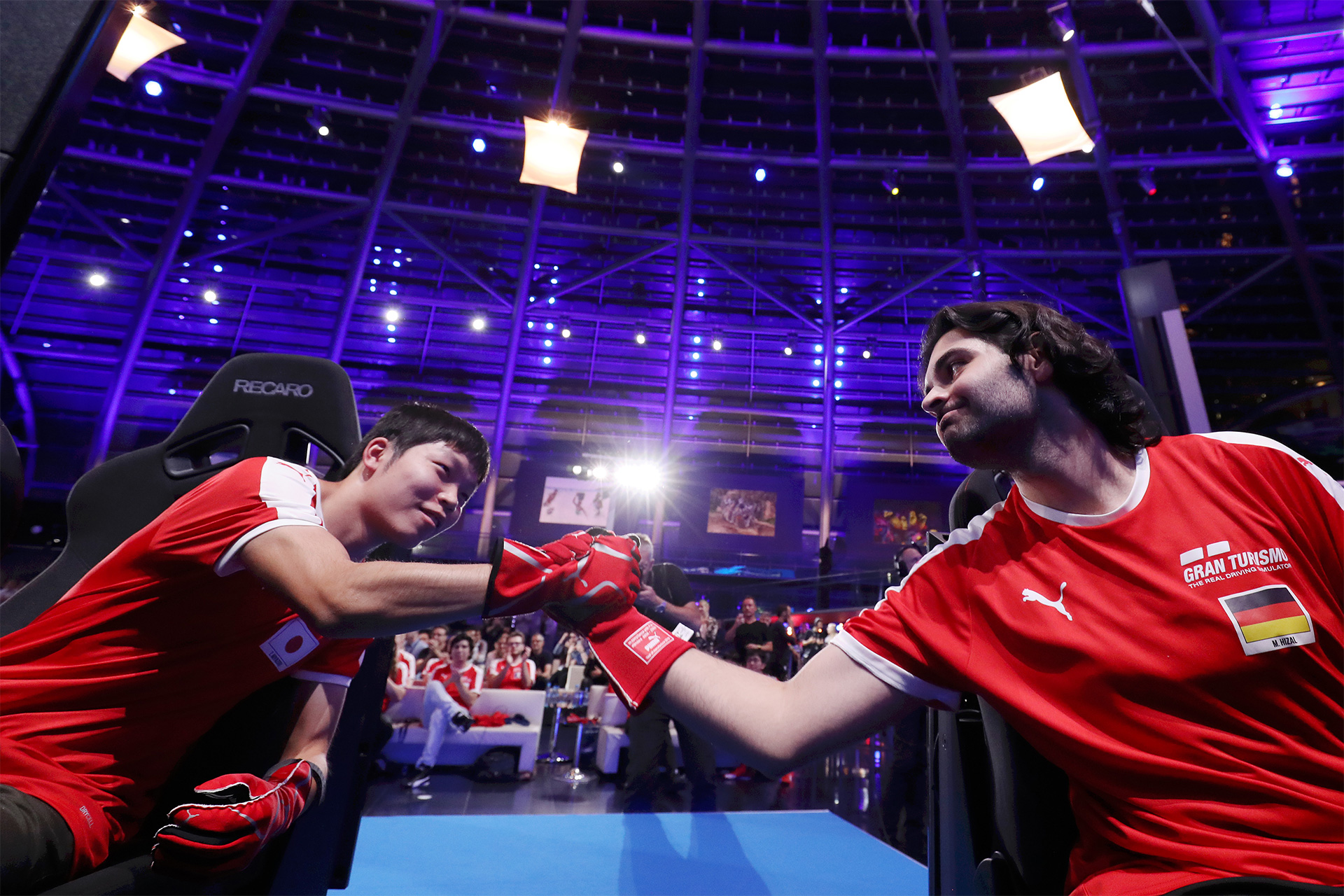 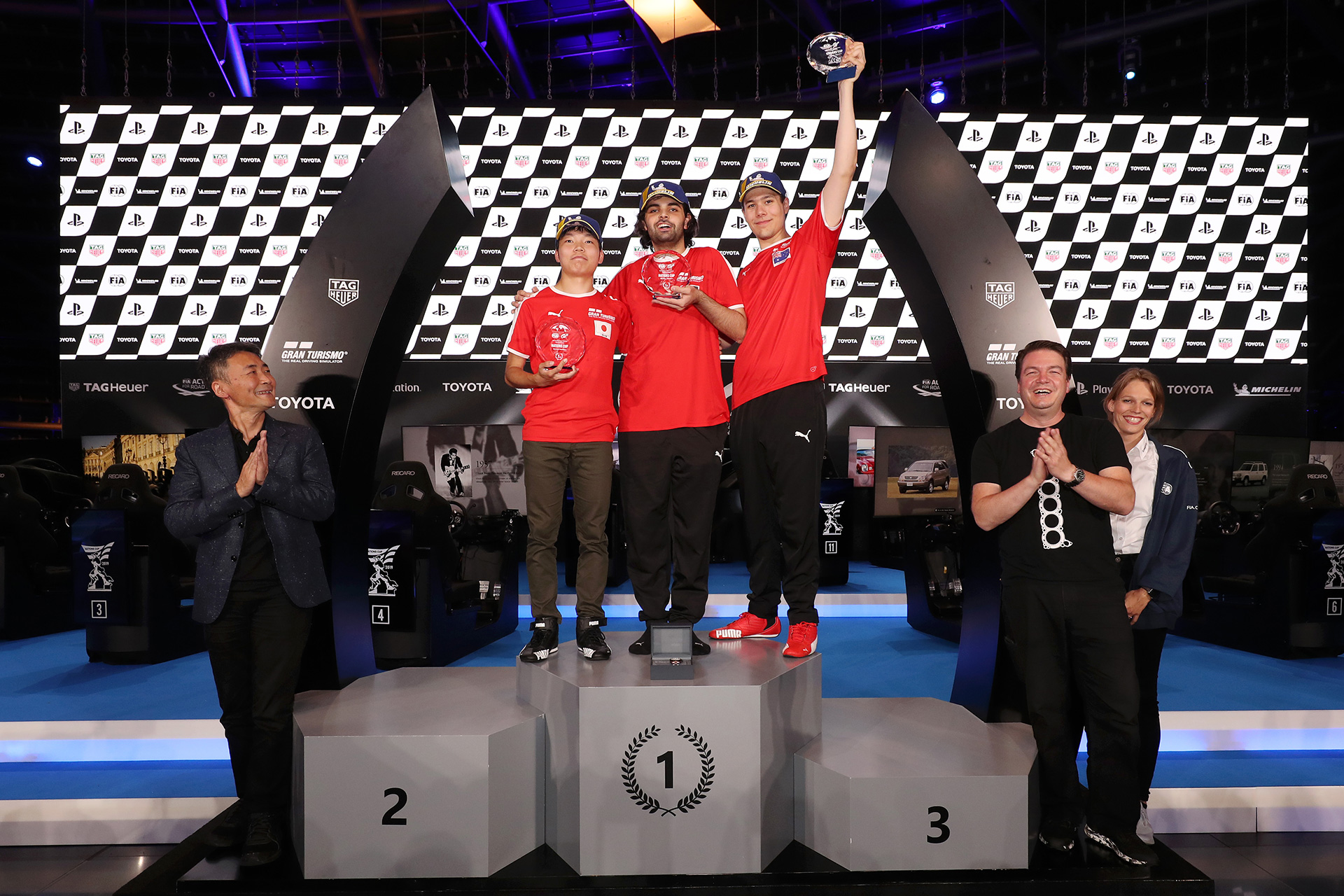 As for Miyazono, who turned in yet another brilliant performance resulting in the first podium finish of the series, he still has a chance to qualify for the World Finals. The final event of the series will be held in his home country of Japan. Rounding out the top three was Latkovski, who has become a force to be reckoned with in both the Nations Cup and Manufacturer Series.

“After finishing in 2nd place so many times, you always want to achieve something more, and finally with this win, I’m satisfied, and I feel relieved at the same time. As for the broken toe, I did feel some pain when I was using the pedals, but I kept the pressure on the ball of my feet, so it was bearable. In the final, I was trying to save fuel because refueling is a must, and the fuel strategy paid off in the end,” Hizal said after the race. The German had the added bonus of being voted "Michelin Driver of the Day" on Gran Turismo social channels. 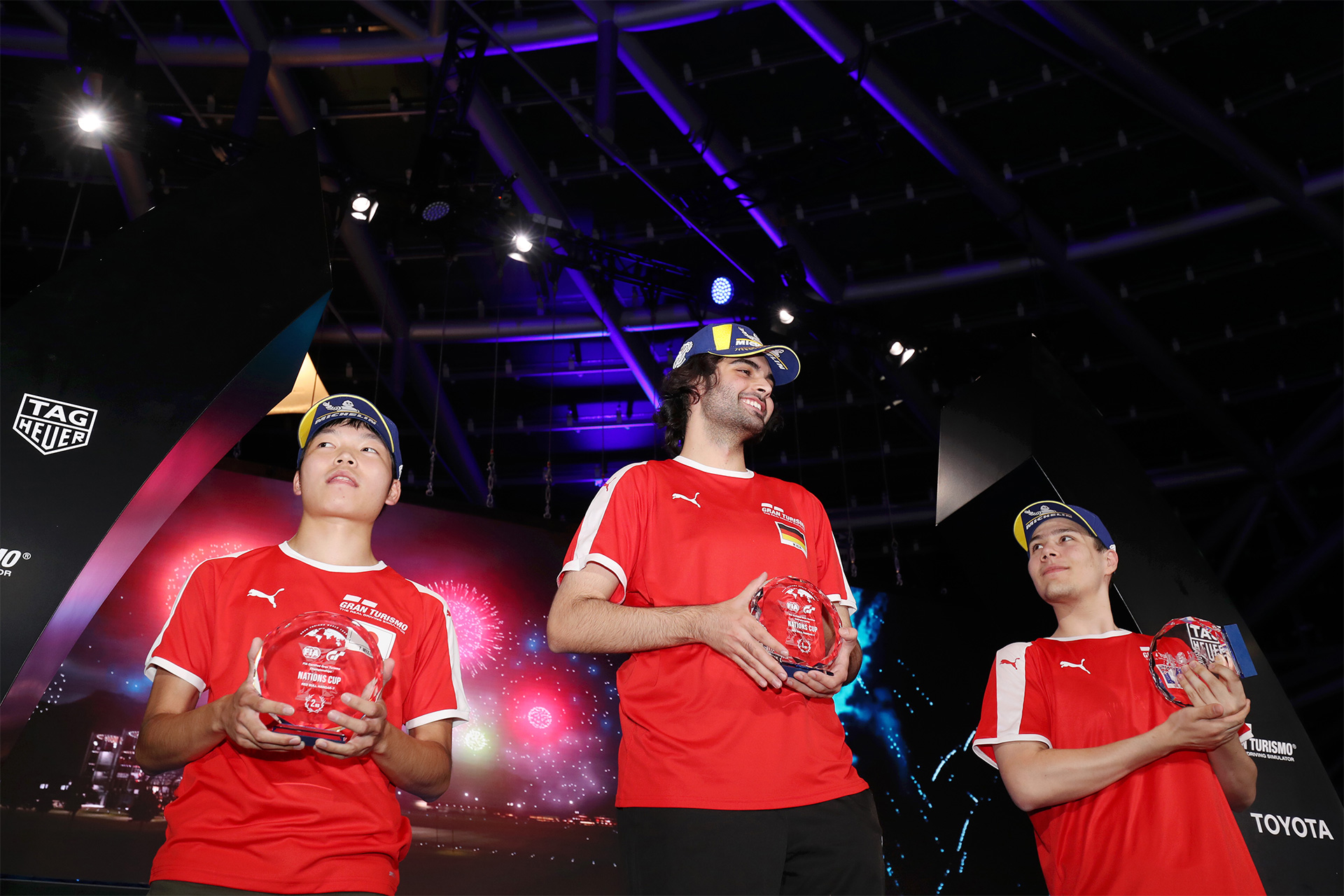 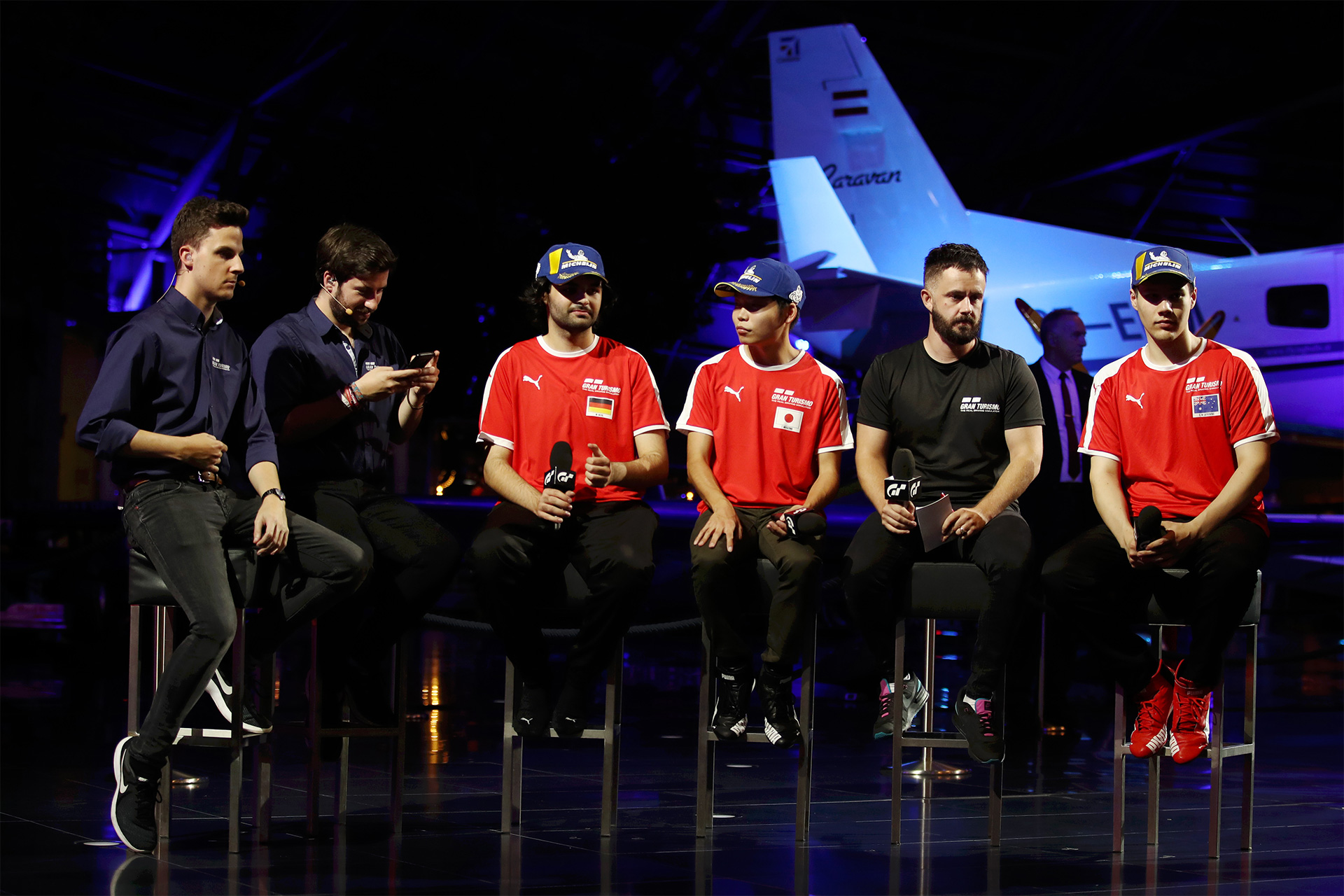 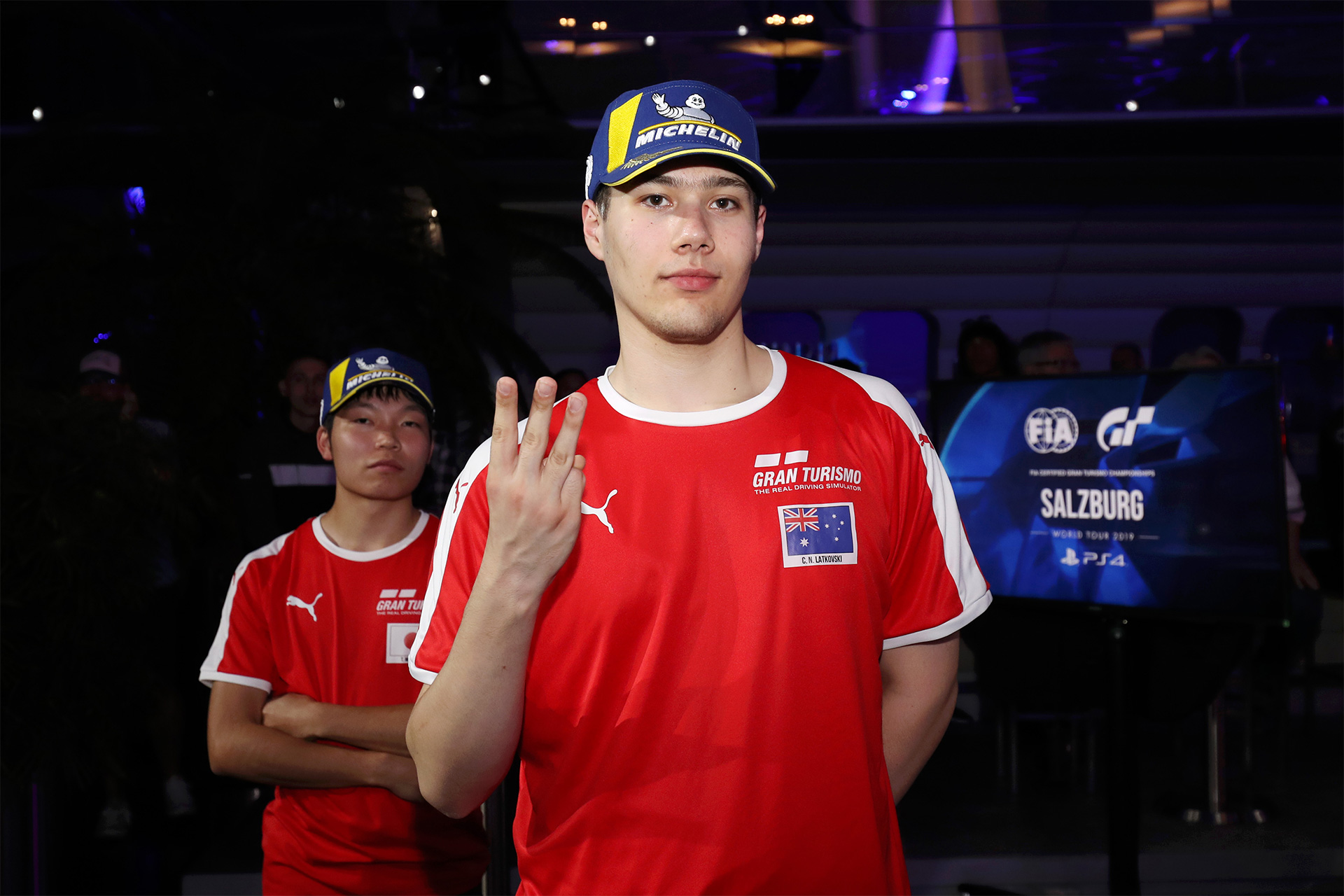 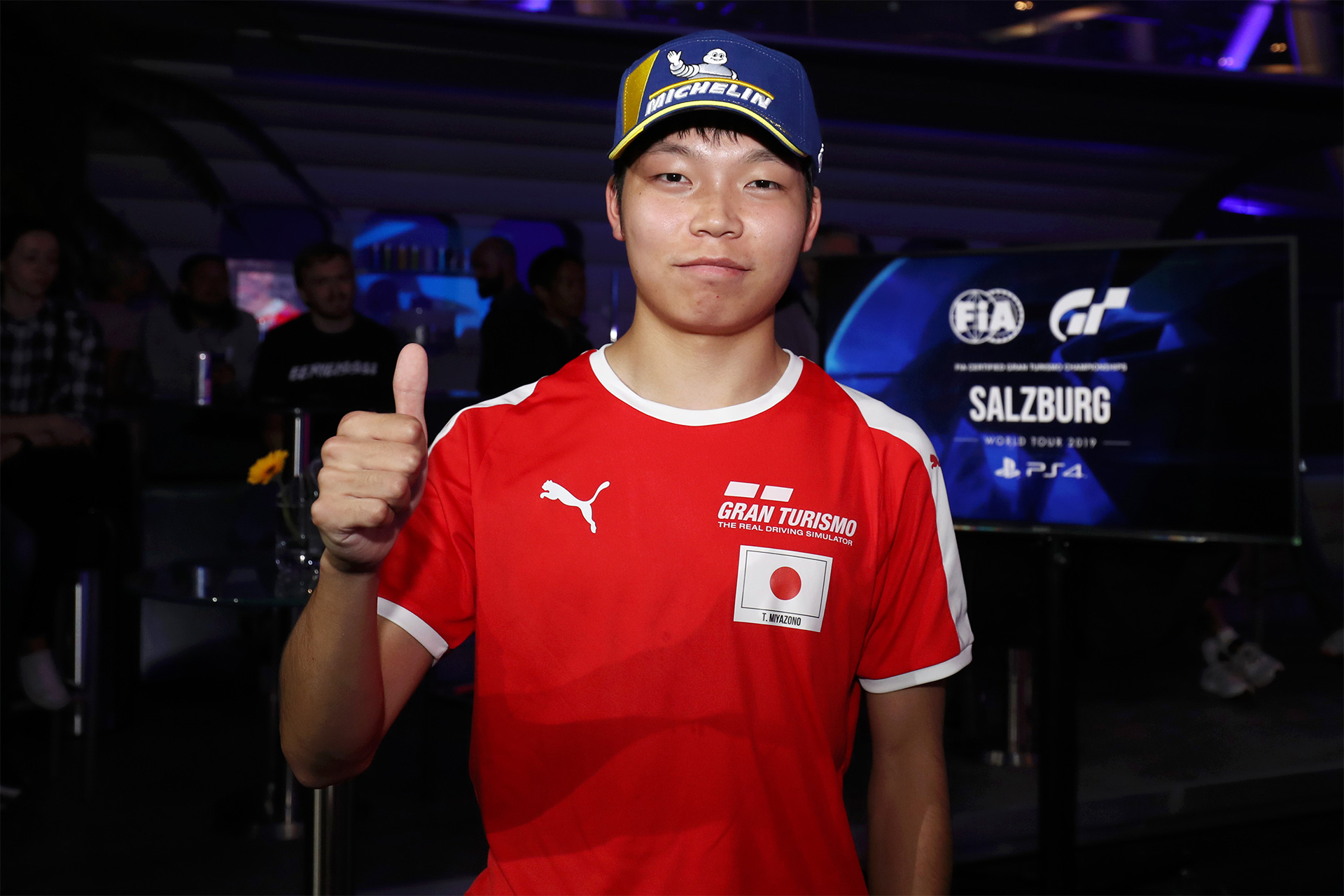 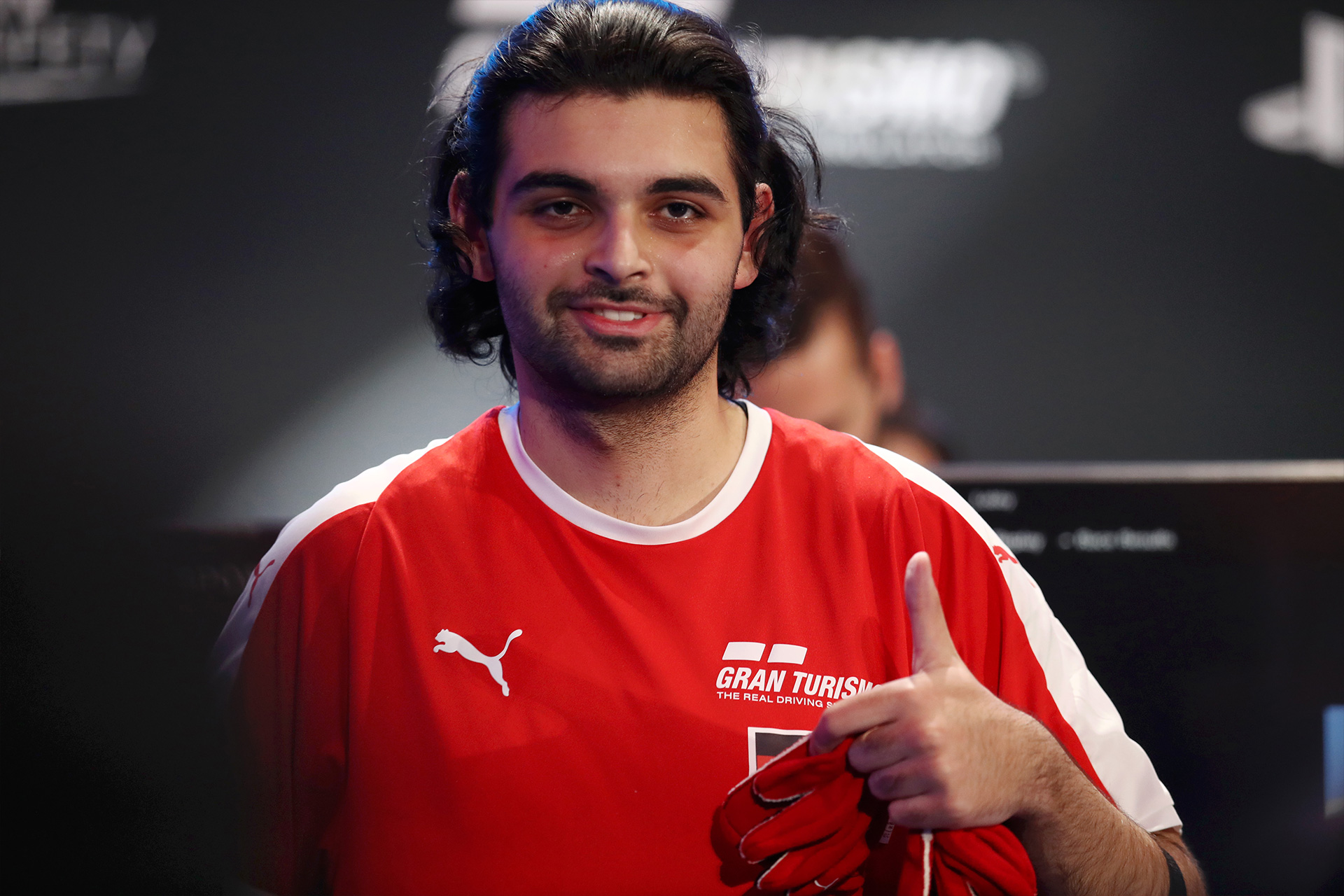