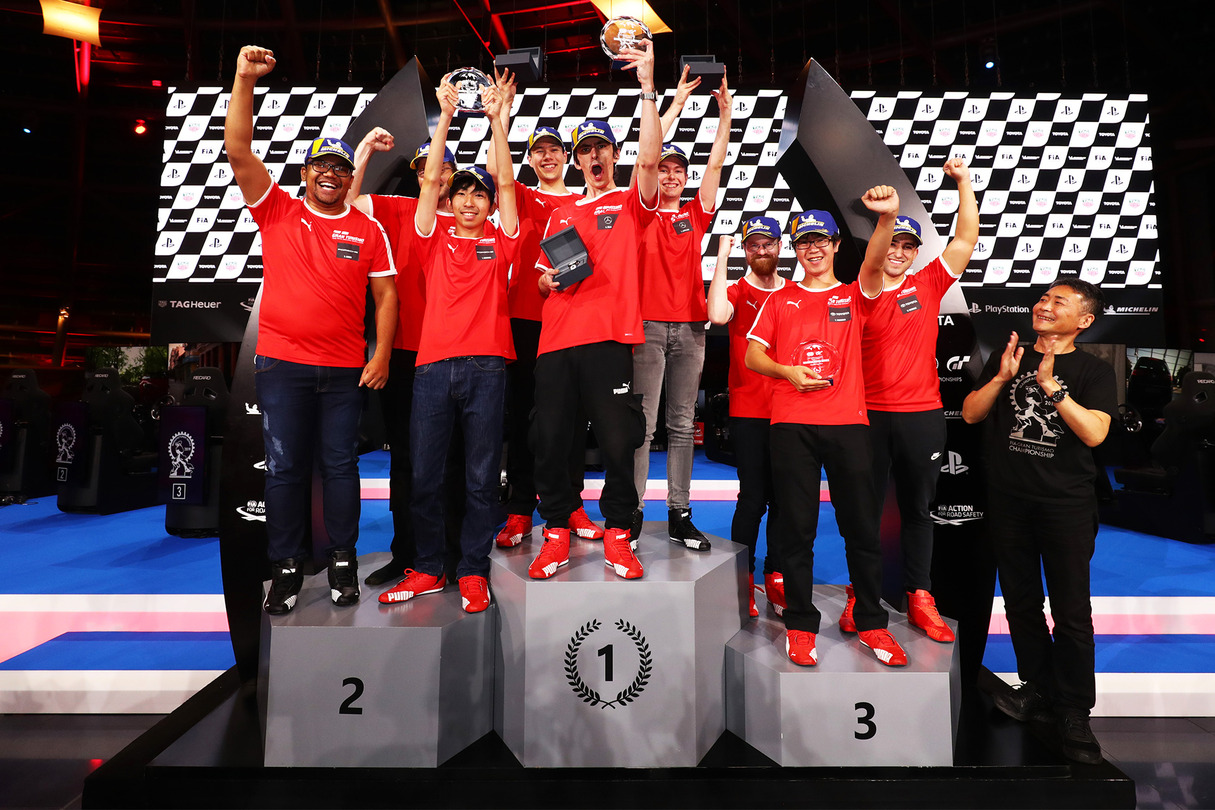 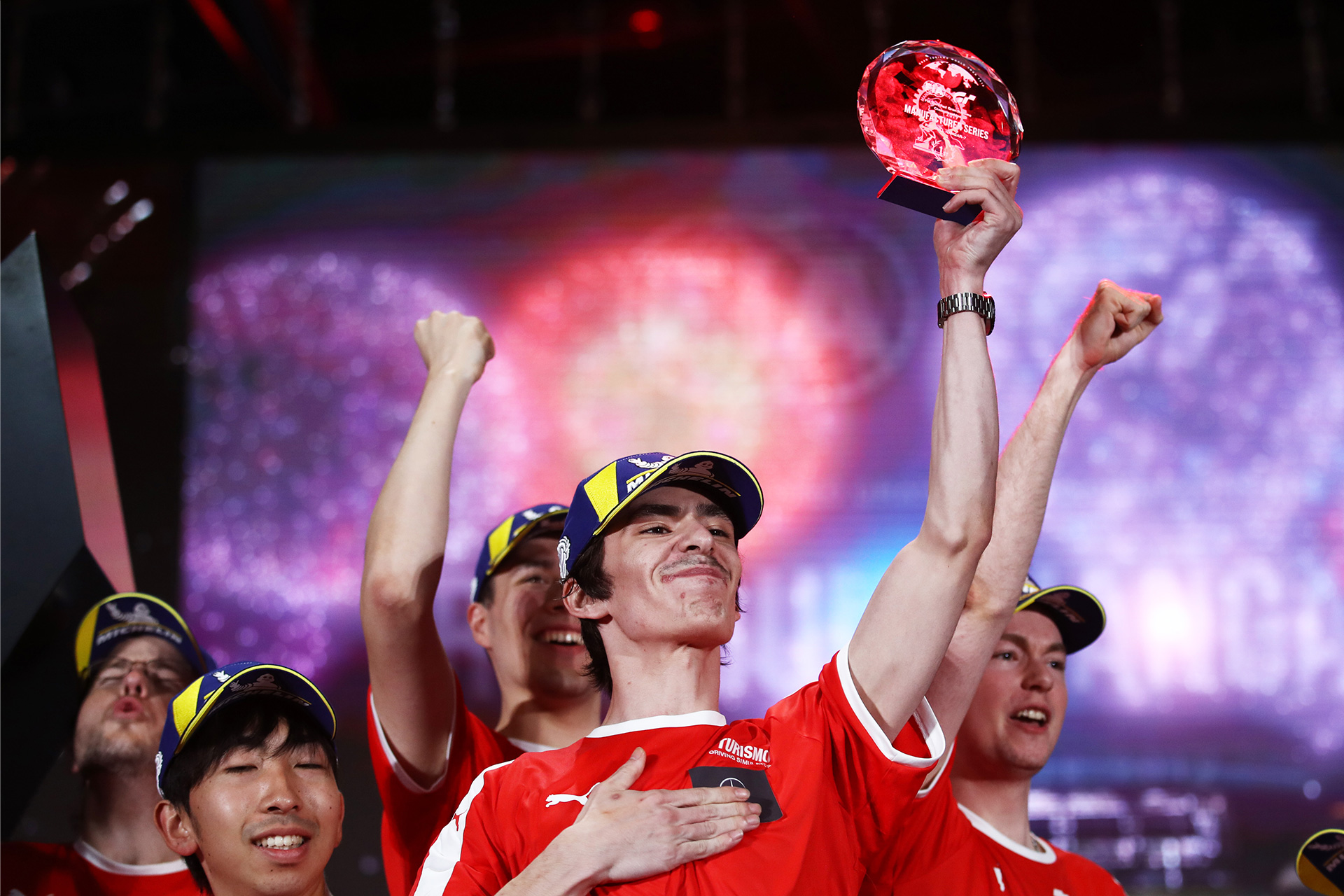 Salzburg, AUSTRIA (September 13, 2019) – The fourth round of the "FIA Gran Turismo Championships" 2019 Series kicked off today at the spectacular Red Bull Hangar-7 amidst the backdrop of exotic race planes and race cars. Day One featured the Manufacturer Series, where 36 drivers from all over the world formed 12 teams to represent their selected manufacturer. In the end, it was Mercedes-Benz that reigned supreme in Salzburg, taking home its second consecutive title of the 2019 Series, marking the first time that ever one maker has gone back-to-back. 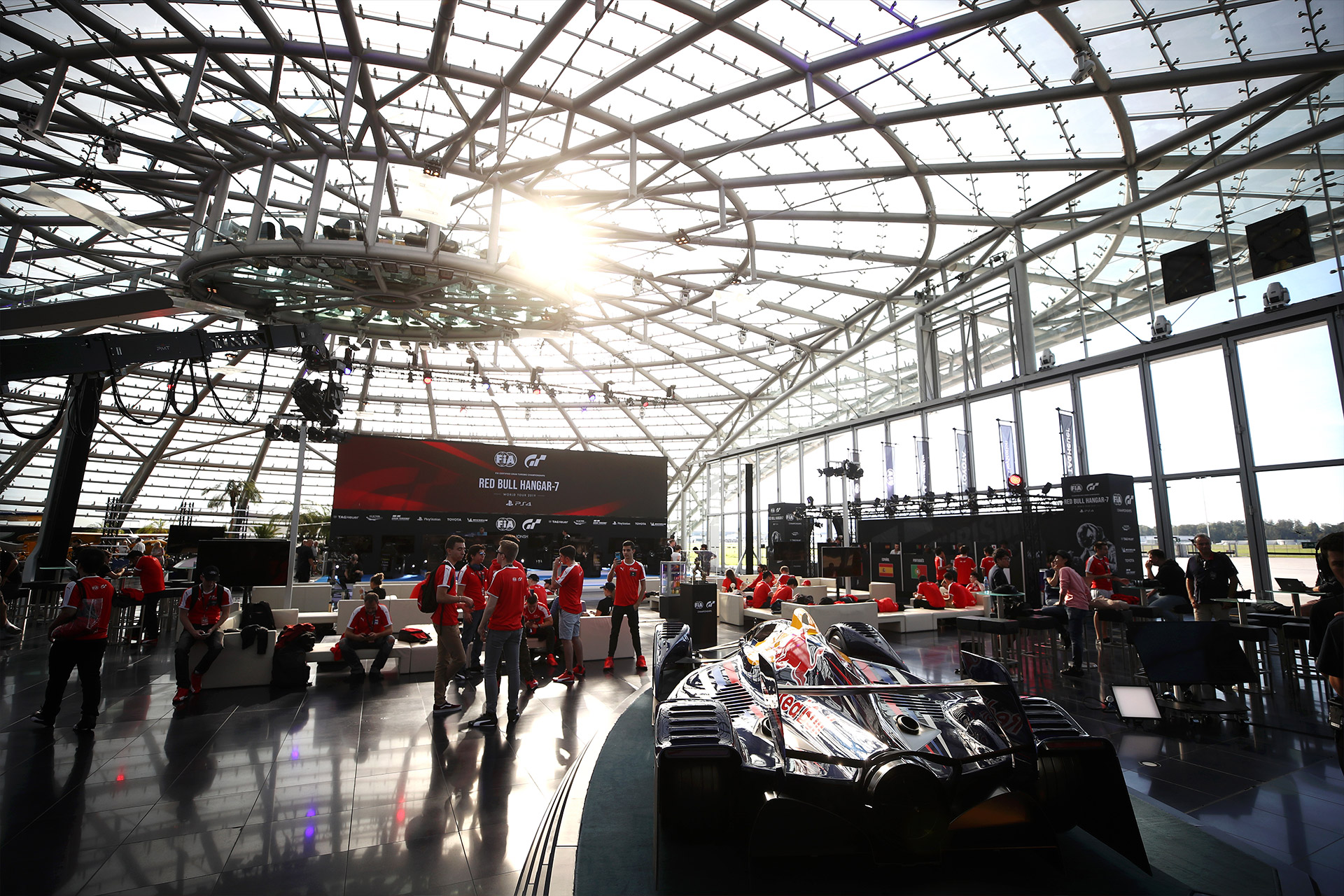 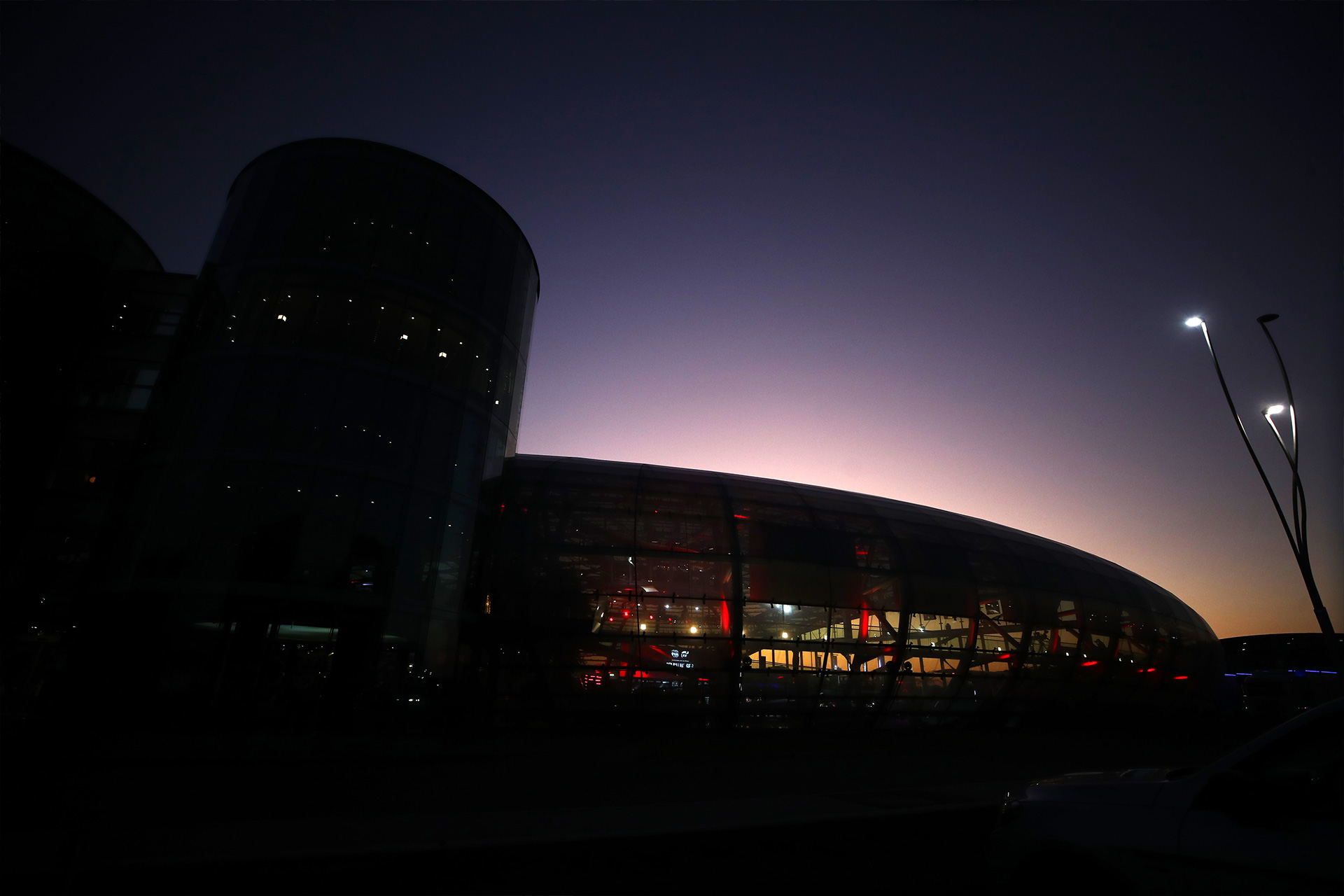 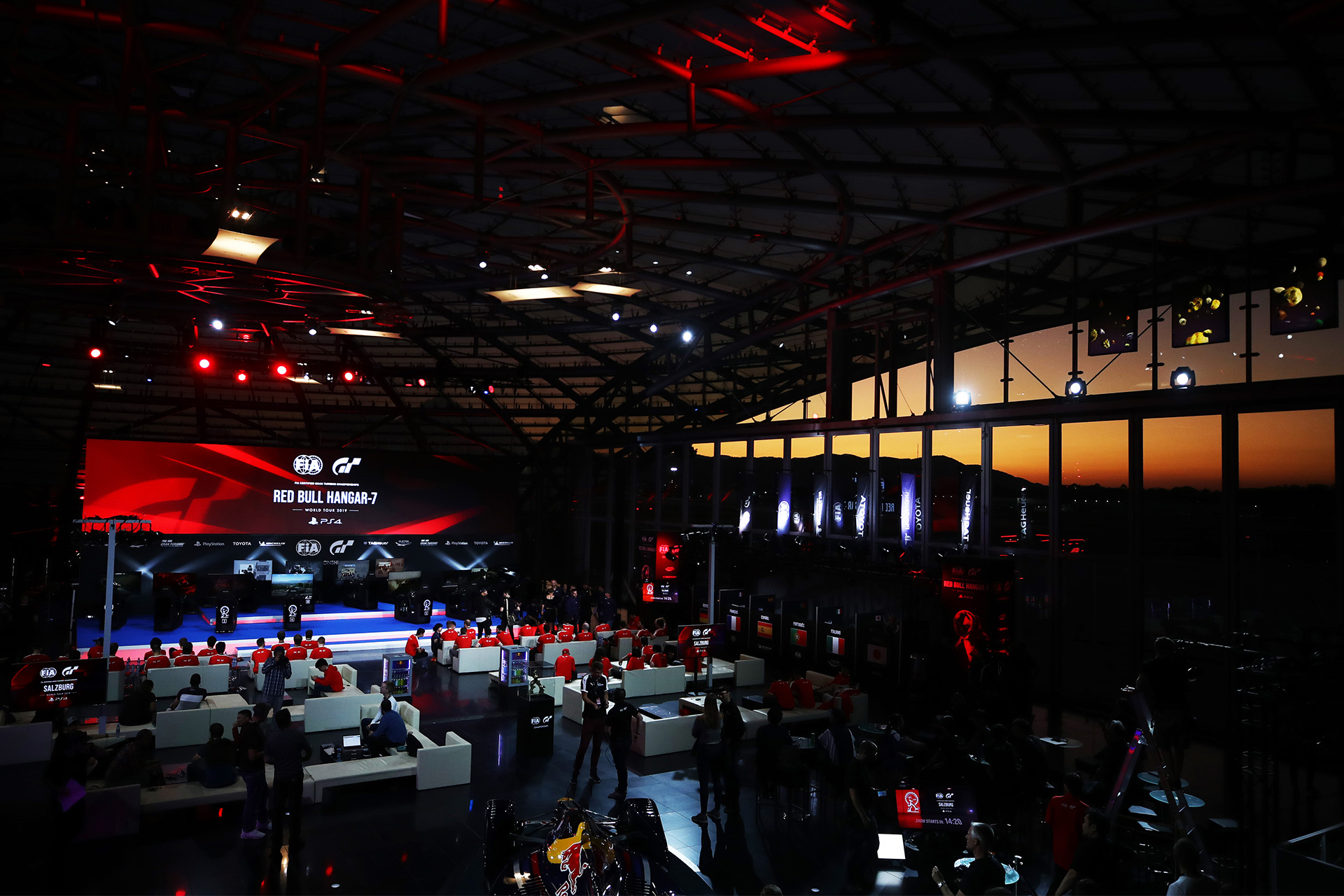 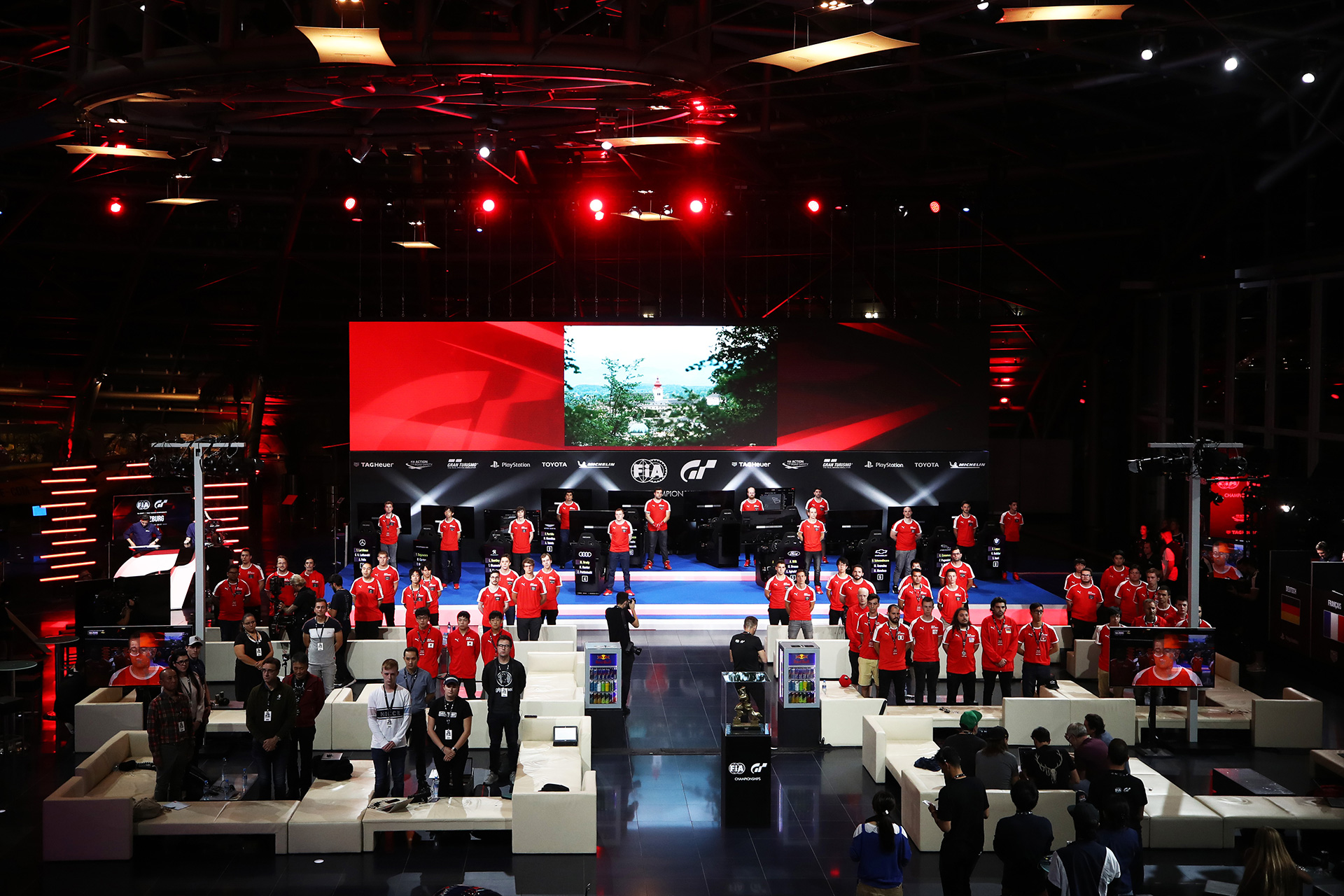 The Manufacturer Series adopted a new format for the Red Bull Hangar-7 venue, featuring only two races, a Race 1 and a Grand Final, with double points awarded for the final race. Each race required a stint by all three drivers and the use of all three different-compound tires for at least one lap (soft, medium, and hard), except in wet conditions when each team was sporting wet tires.

With the starting grid determined by the Qualifying session, followed by the Top 6 Qualifying, it was the Audi R8 LMS with Martin Grady (UK) behind the wheel that sat on pole, with the Porsche 911 RSR and Tatsuya Sugawara (Japan) in the number-two spot, and Lewis Bentley (UK) driving the Peugeot RCZ Gr. 3 rounding out the top three. The venue: 17 laps around the challenging Red Bull Ring in heavy wet conditions.

The race began without incident after all 12 cars made it clearly through the first corner after the rolling start. Tire selection would not play a role here, as all the teams ran the entire race on wet-compound rubber. The running order stayed consistent for the first few laps, with much of the drama taking place in the middle of the pack as the front-engine/rear-drive cars struggled to find traction on the slippery surface.

On Lap 5, the Mercedes-Benz AMG GT3 began finding its groove, after previously relinquishing its 4th overall position to the Ford GT of Adam Wilk (Australia), but reclaiming it with a nice move through Turn 4 by driver Tom Lartilleux (France). The following lap, Porsche decided to pit to take on a fresh set of tires with Brazil’s Daniel Carmo jumping into the driver’s seat. The 911 re-entered the race in 4th position, only four seconds off the lead.

With the Audi R8 LMS maintaining its advantage over the Peugeot RCZ and Mercedes-Benz AMG GT3 through the first half of the race, Team Mercedes-Benz dove into the pits on Lap 8 to get a fresh set of Michelins and put its ace driver, Cody Nikola Latkovski (Australia), behind the wheel. Perhaps in response to this, race leader Audi came in for a driver and tire change the following lap, with New Zealand’s Hayden Hunter jumping into the driver’s seat. After a lightning quick pit stop, Audi re-entered the race in 2nd place, only 0.5 sec. behind the Peugeot, which had yet to pit. Lap 11 saw Peugeot make its first pit stop as Takuya Okamoto of Japan took over the driving duties, followed closely by Porsche’s second pit stop, giving anchor driver Tristan Bayless (USA) a clear run to the finish. Audi employed the same strategy, pitting the following lap, tasking Zach Pettinicchi, also from the USA, to complete the race.

The best action of the race came on Lap 13, when Latkovski in the Mercedes-Benz set up the 2nd-place Peugeot through Turns 5 and 6, before making the pass on the Turn 7 exit, with the Audi right on their tails. By lap 15, although it seemed like a four-horse race, it was really between Team Audi and Team Porsche as the Mercedes-Benz and Peugeot had one more pit stop remaining. Once they were out of the way, it was the Audi R8 LMS that crossed the finish line first, scoring 12 points, followed closely by the Porsche 911 RSR with 10 points. Mercedes-Benz came in 3rd, good enough for 8 points. 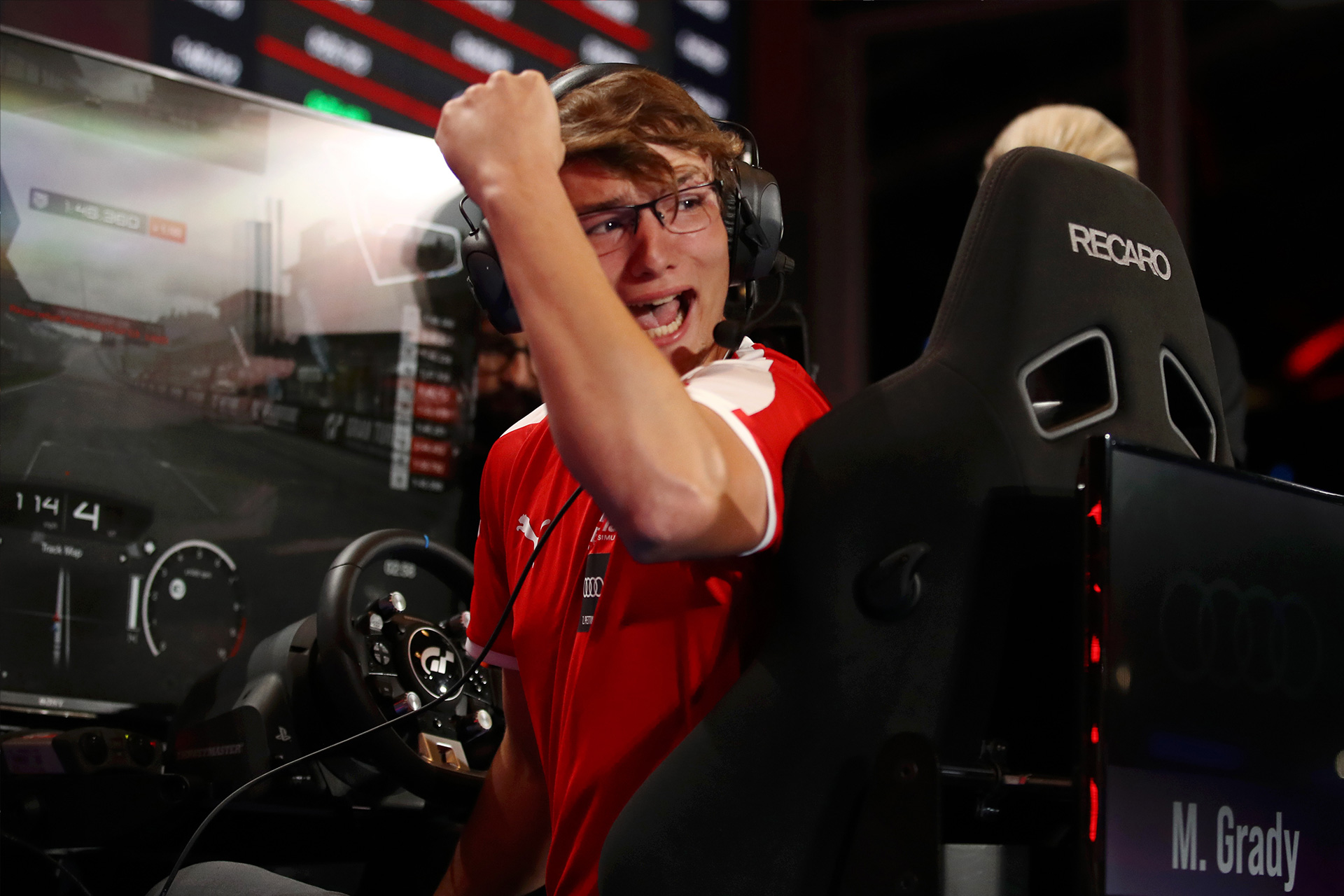 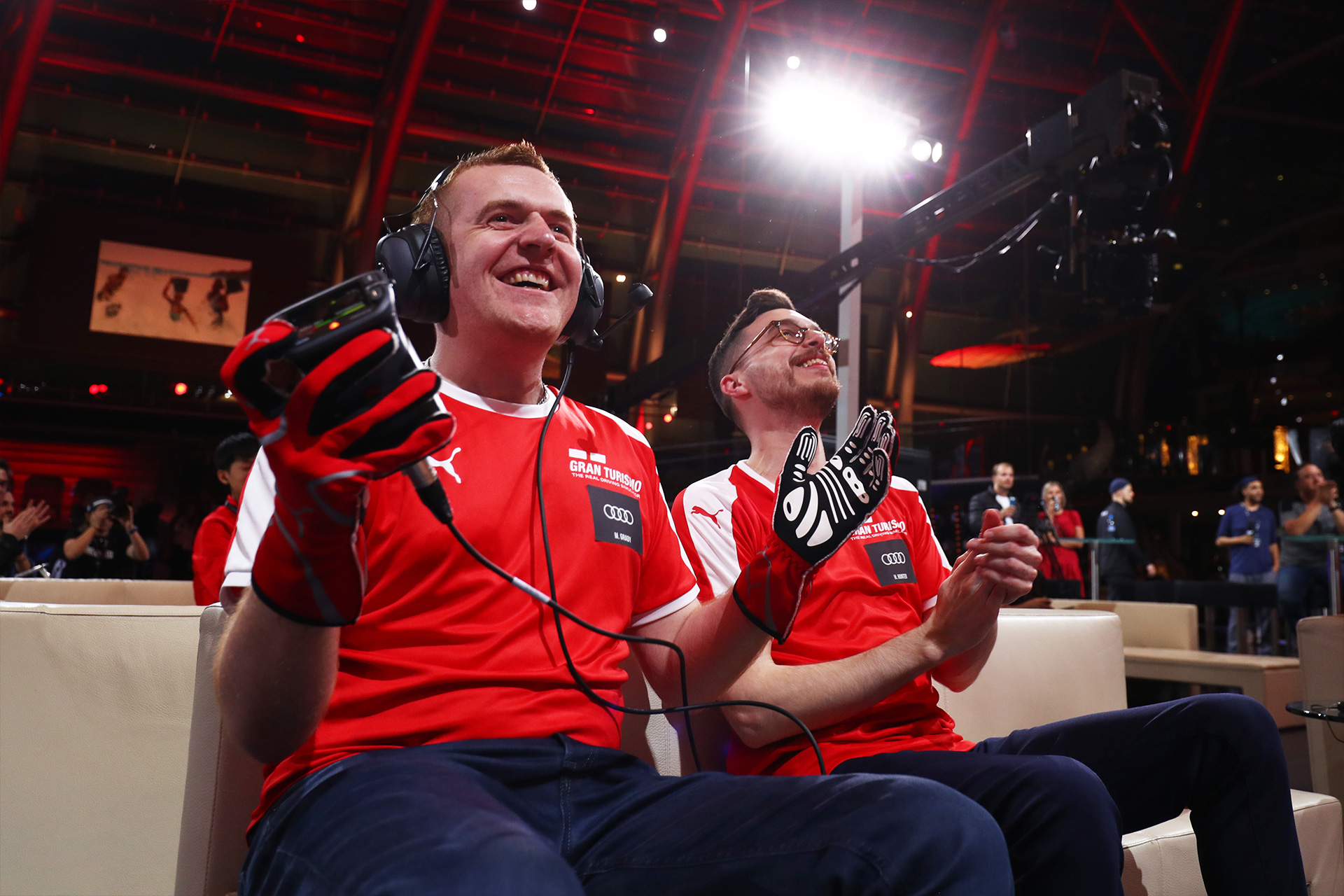 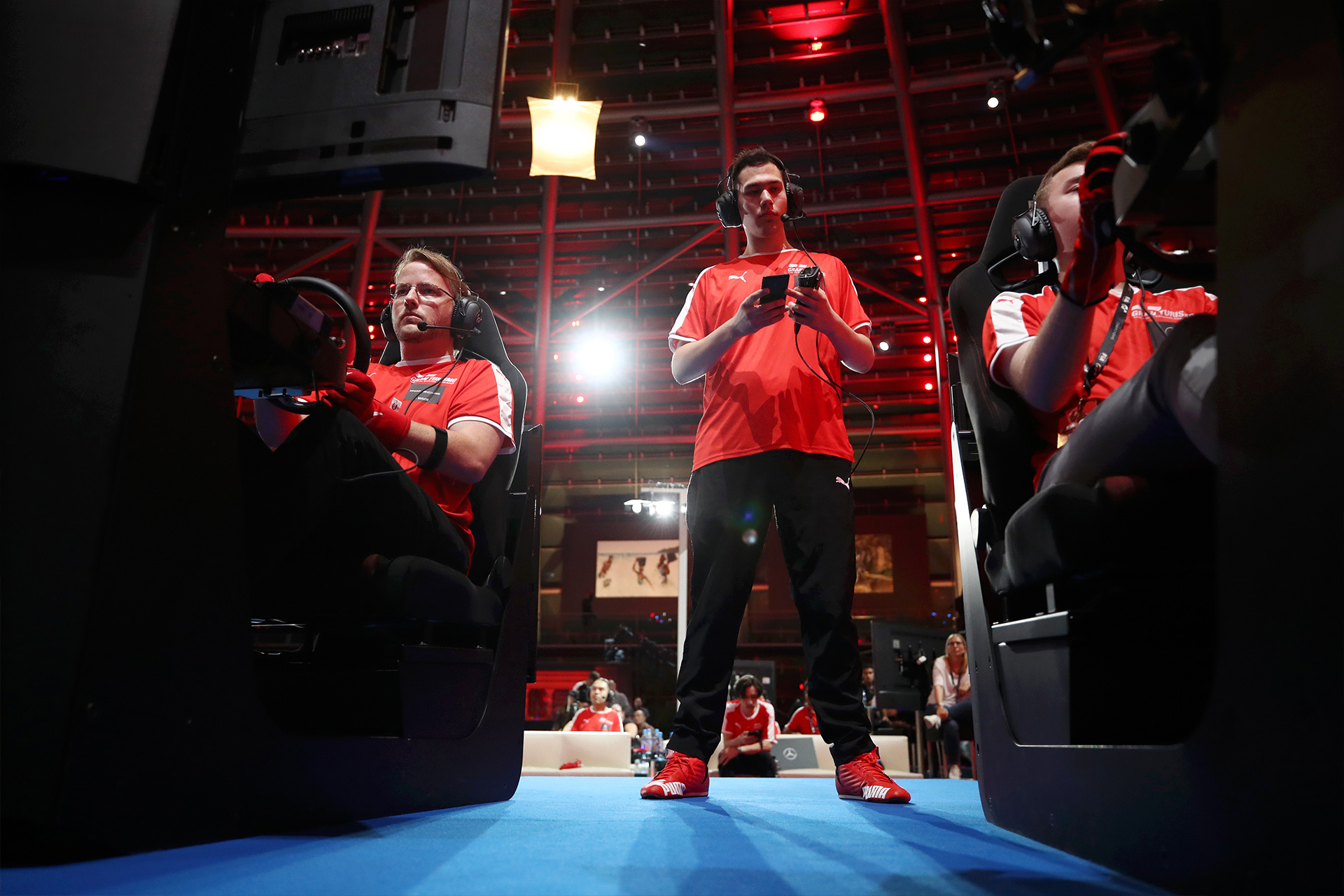 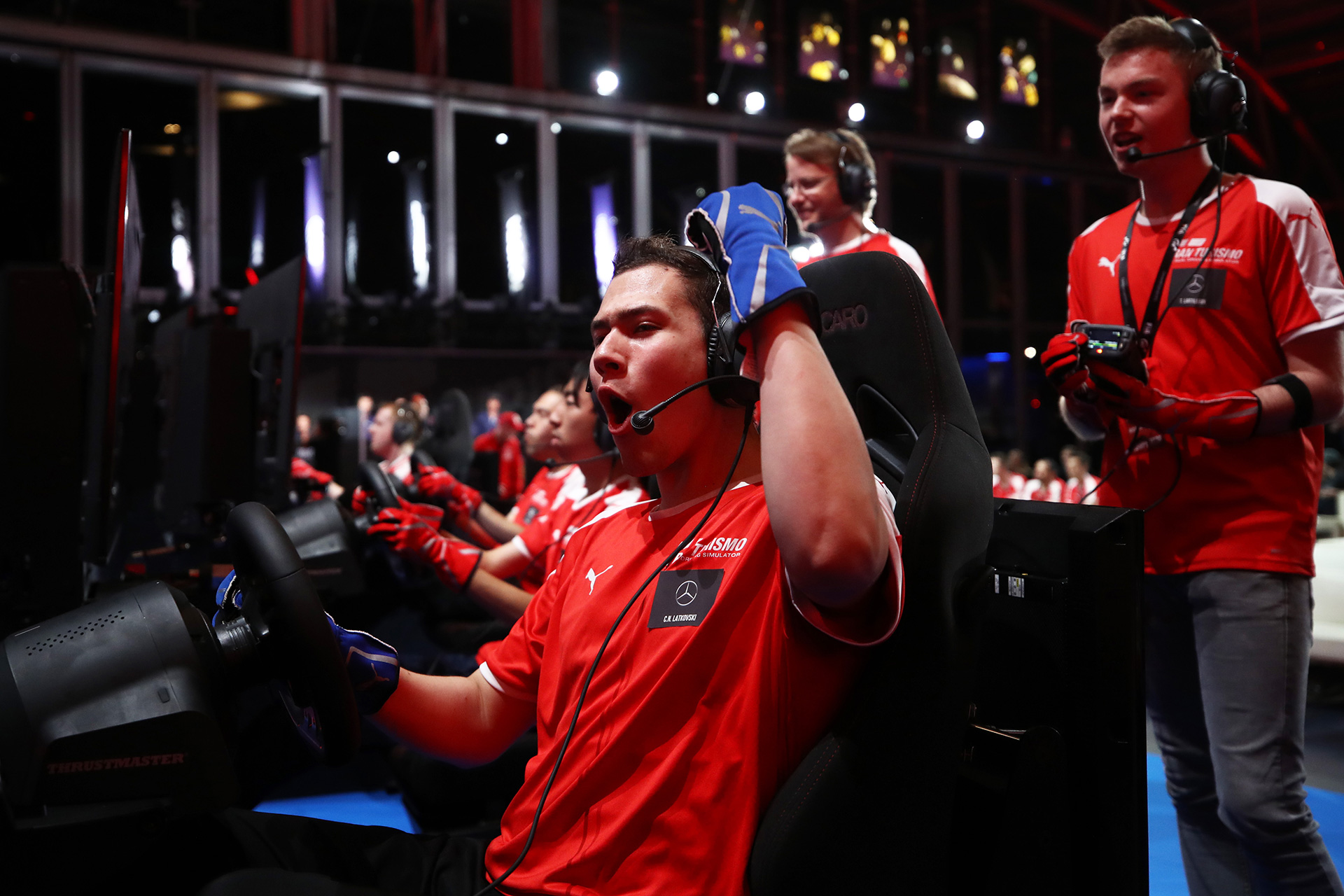 With the previous race deciding the starting order for the Grand Final, the Audi R8 LMS started from pole for the 17-lap contest around the legendary Spa-Francorchamps racetrack under blue skies and dry conditions. With the points in this round worth double, it was still anybody’s championship to claim.

The race began with a bang, as the Mercedes-Benz AMG GT3 of Lartilleux, on soft-compound tires, got around Bayless in the Porsche, which were on the mediums, through the first corner. Then, a few seconds later Lewis Bentley lost control of his Peugeot RCZ Gr.3 through Eau Rouge (Turns 2, 3 and 4) and plowed the car’s nose into the wall, dropping to the very back of the pack. Meanwhile, Lartilleux kept charging hard on the Kemmel Straight to take the lead away from the Audi R8 LMS, with Bayless in the Porsche following suit. So, at the end of Lap 1, the running order was Mercedes-Benz, Porsche, Audi and Aston Martin representing the top four.

As Mercedes-Benz gradually pulled away from the pack, building up a lead of more than six seconds by Lap 6, a vicious battle for 3rd place was brewing. Pettinicchi in the Audi was doing all he could to hold off a quartet of cars led by Fabian Portilla (Chile) in the Aston Martin Vantage, followed by the Ford GT of Adam Wilk and the Chevrolet Corvette, driven by Michael Avansino (USA). Audi finally surrendered its position when it entered the pits at the end of Lap 6, going to soft-compound tires with Hunter tasked with the driving duties. The Audi re-entered the race in 6th place.

At the halfway point, under darkening skies, race-leader Mercedes-Benz made its first pit stop, topping off its fuel tank and taking on hard-compound tires (which proved about a second a lap slower than the softs). Anthony Felix (USA) took over the driving duties. The pit stop changed the running order to Porsche in 1st place with a lead of more than 19 seconds over the Audi and Aston Martin, while Mercedes-Benz was another 1.5 seconds behind in 4th place. Meanwhile, Team BMW, with Coque López behind the wheel, worked its way the up to 5th place after starting the race in 11th position.

On Lap 9, Porsche dove into the pits for the first time, taking on fuel and swapping its mediums for hard-compound tires. Mercedes-Benz also pitted, going to the slightly quicker medium-compound tires as Latkovski took the wheel, now free and clear to go to the finish without any more stops. Porsche re-entered the race in the lead, but pitted the next lap, fulfilling the one-lap minimum rule for using each compound tire. Now, like Mercedes-Benz, it was a dash to the finish, with Sugawara driving the 911. While this was going on, Aston Martin claimed the race lead, but after a slew of cars made their required pit stops, it was Mercedes-Benz that found itself at the top of the leaderboard.

On Lap 14, a heated battle for 4th place unfolded between Tomoaki Yamanaka (Japan), in the Toyota Supra Racing Concept, which started the race in 8th position, and Kenny Conomos (Australia), in the Jaguar F-Type Gr.3. As they went side by side through most of the latter half of the racetrack, the Toyota finally overtook the Jag at the end of the Kemmel Straight. Yamanaka then set his sights on his countryman, Sugawara in the Porsche, and ultimately ran him down a lap later to take over 2nd place.

The race ended with Team Mercedes-Benz cruising to the checkered flag with an eight-second cushion, winning a total of 32 points and the overall title. Surprising everyone was Team Toyota’s 2nd-place finish, which was enough to give the Japanese manufacturer 3rd-place overall (23 points). Porsche’s 3rd-place finish in the Grand Final earned it a 2nd-place overall finish (26 points). But the story of the day was the Mercedes-Benz team that made it back-to-back after also taking last month’s championship at the "Word Tour 2019 - New York," the first time this has ever happened. 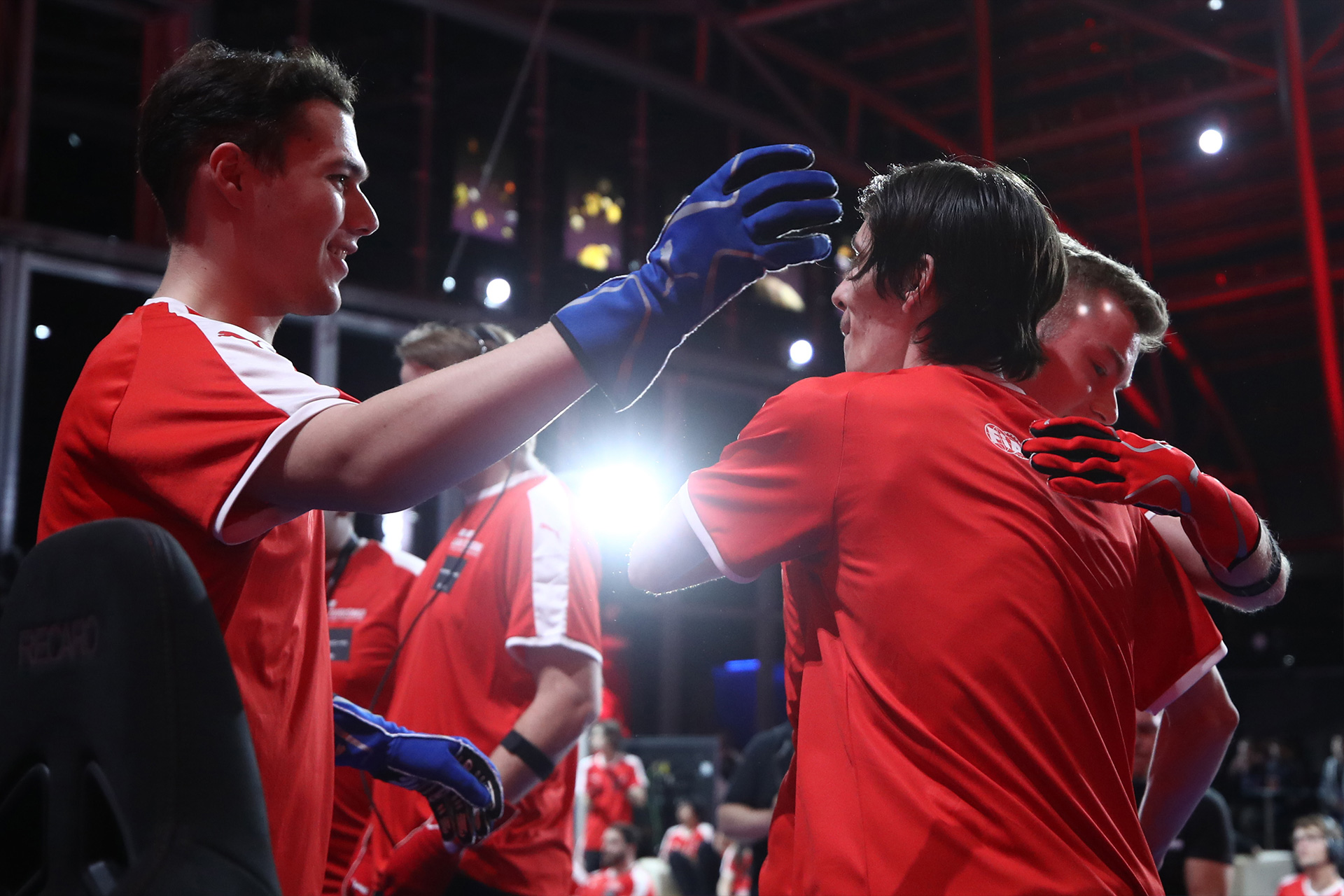 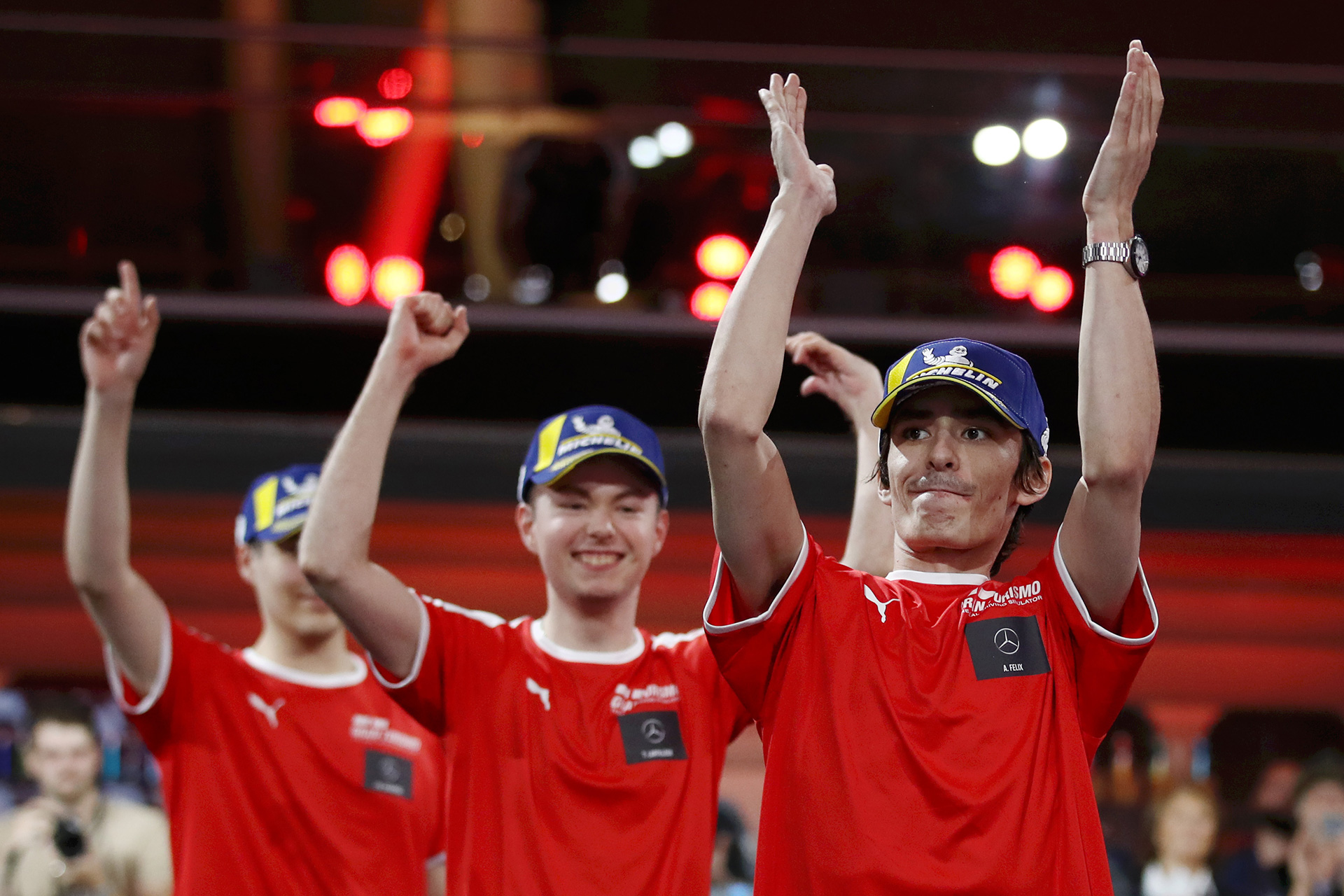 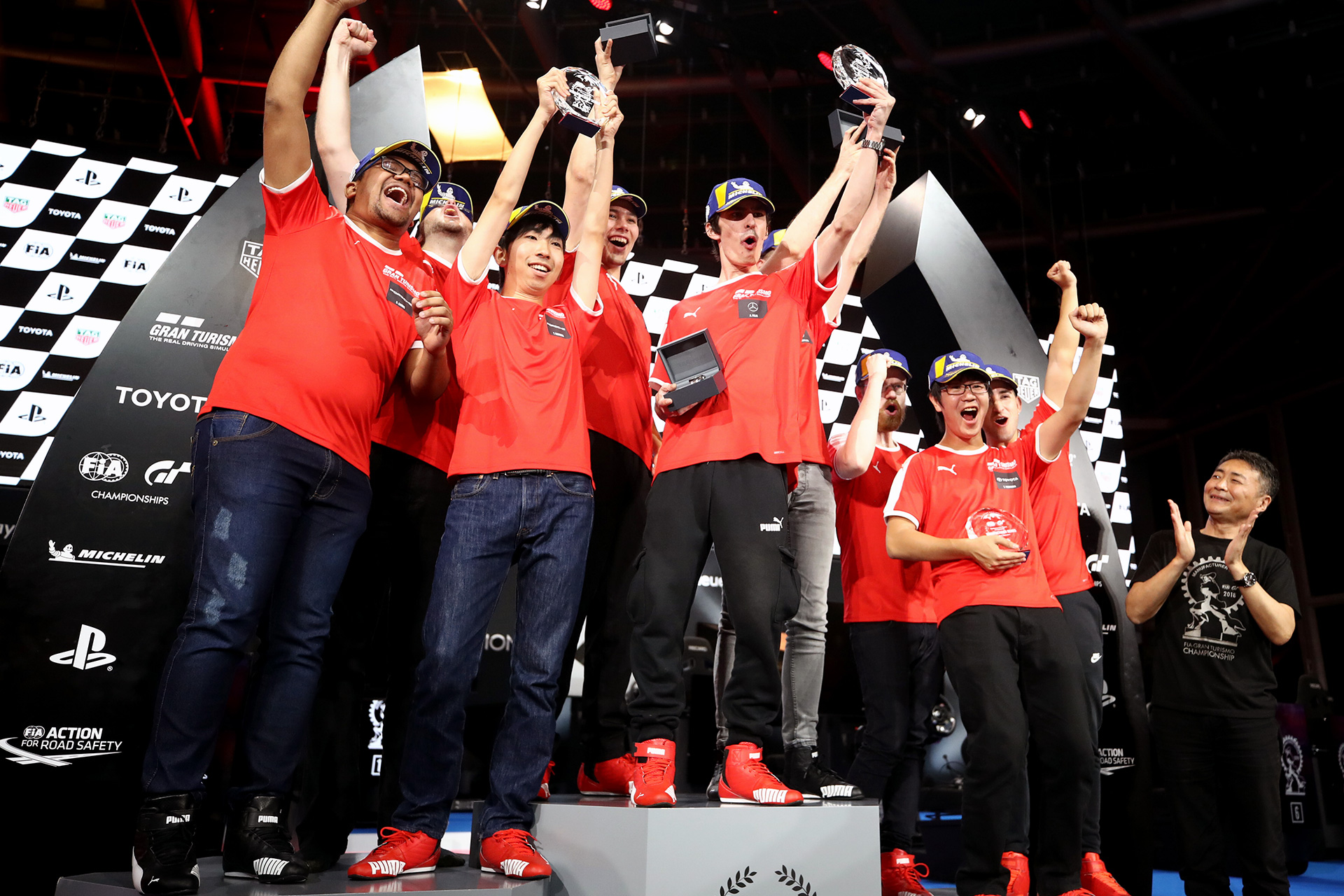 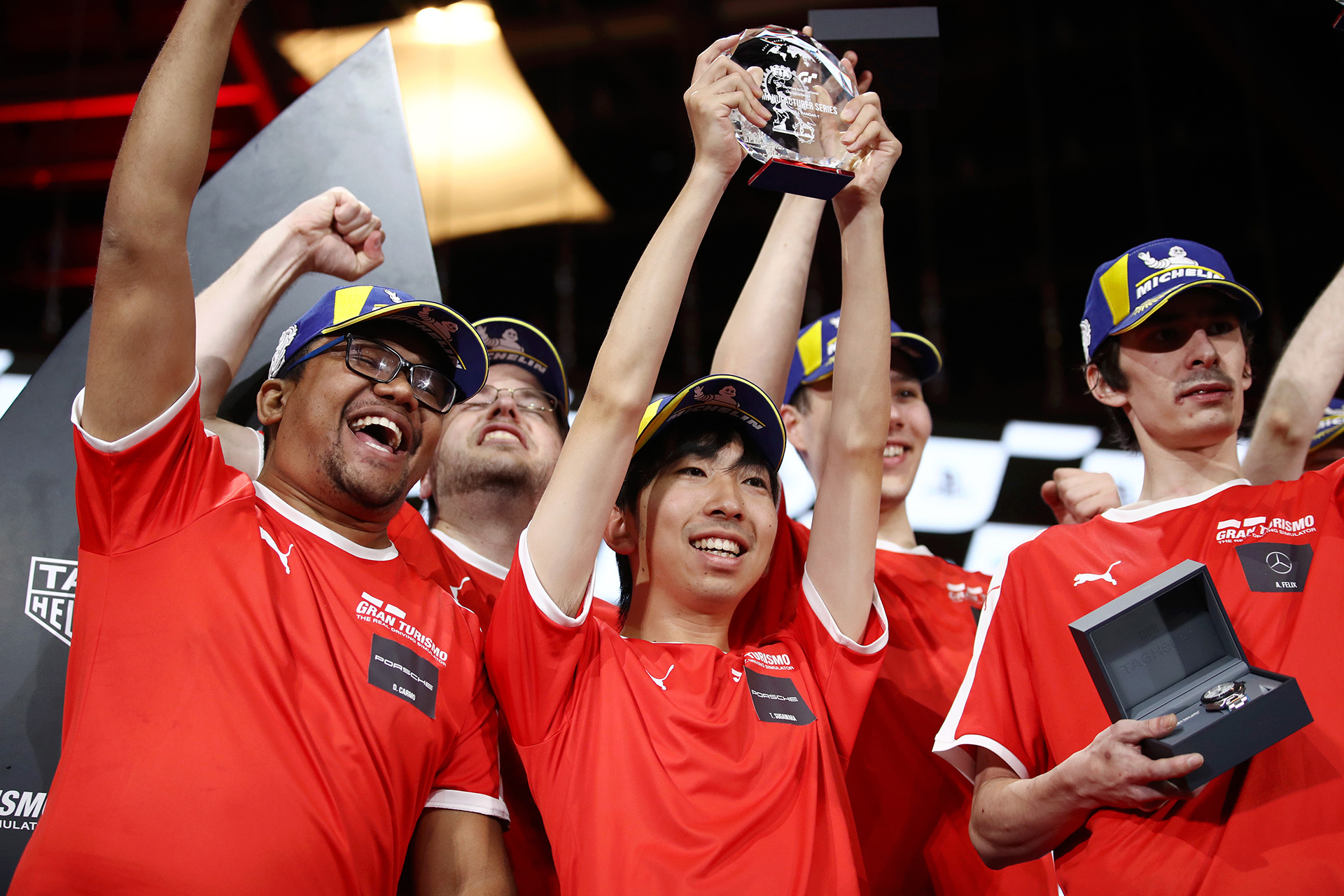 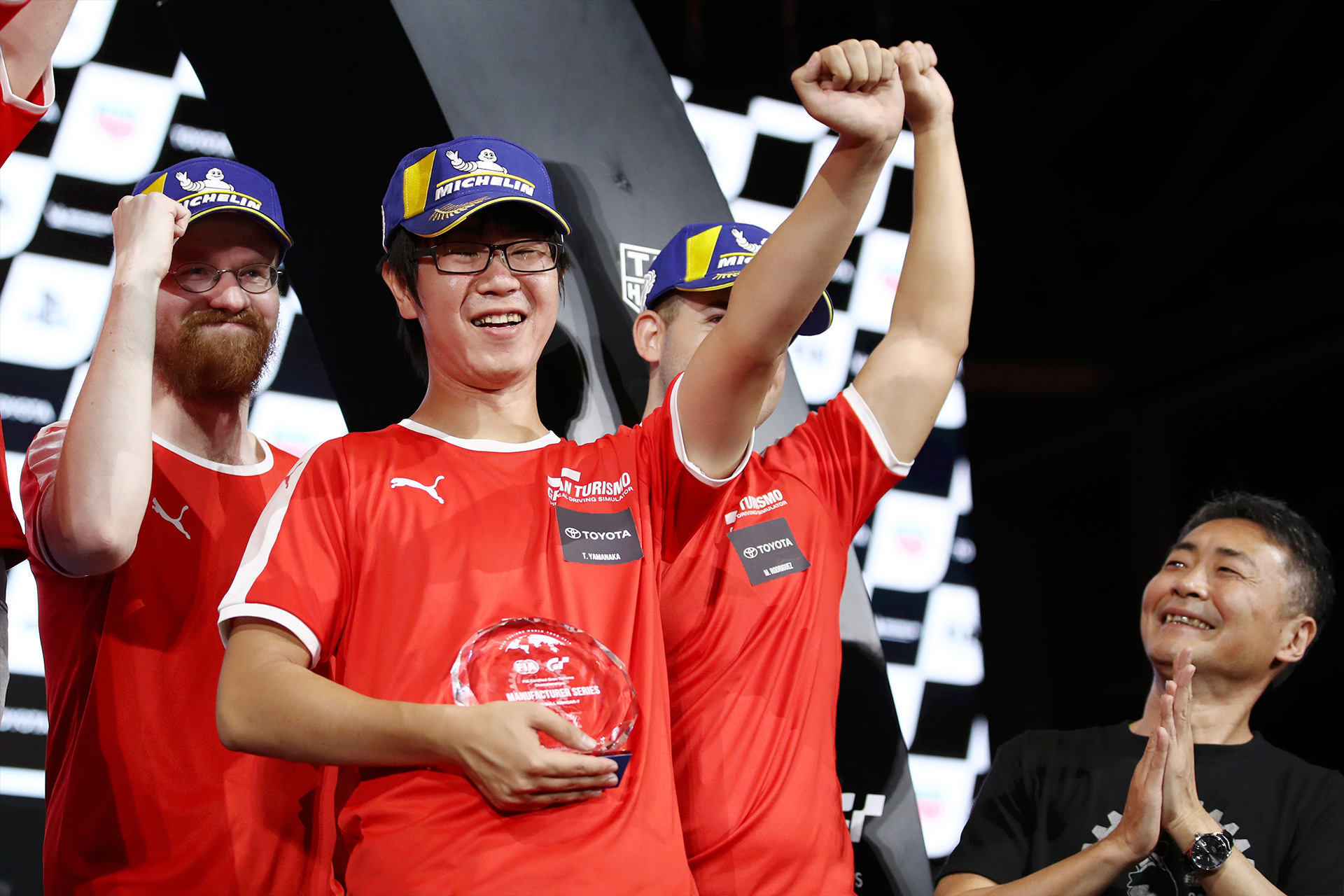 “We all did out part. There’s nothing more I can say. We did everything to the letter, we never missed an opportunity, we took every chance and risk, and it came out in flying colors in the end. I think the new structure is interesting as it allows us to race as a team more, but I also feel that having individual races is important,” Latkovski of Team Mercedes-Benz said after the race.

The 'World Tour 2019 - Red Bull Hangar-7' event will wrap up tomorrow with the Nations Cup, where 24 of the best drivers from around the world, representing their respective home countries, will battle head-to-head to claim a coveted spot at the World Finals.