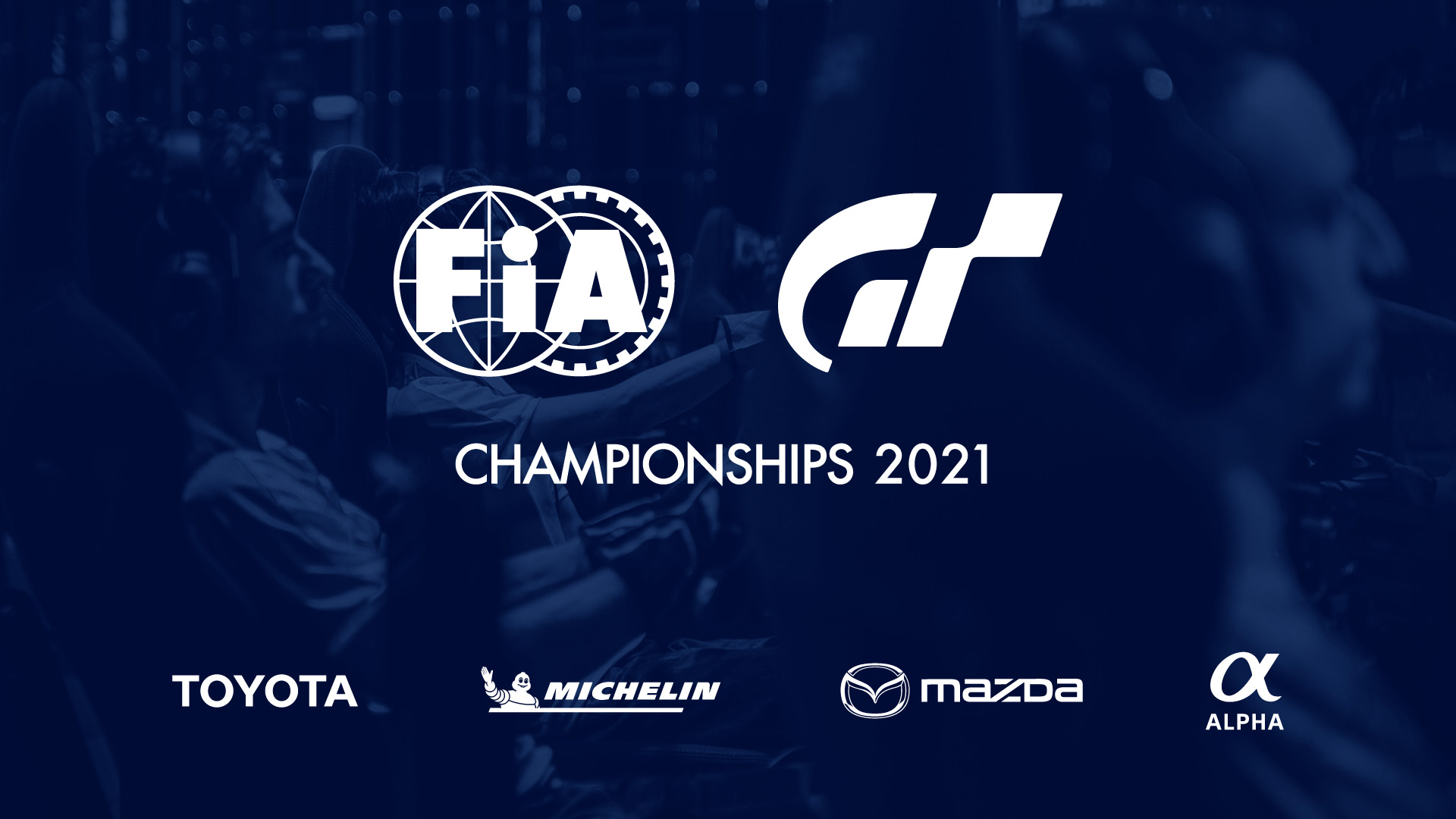 The "FIA Gran Turismo Championships" 2021 Series is set to commence on April 21.

As with past seasons, the championships will consist of two separate categories: the Nations Cup, which features the top drivers from various countries and territories around the world, and the Manufacturer Series that pits auto manufacturers, including Official Partners Toyota and Mazda, against one another.

In addition to the traditional Online Series where competitors can earn points, there will be four "World Series" events in this year's all-virtual championships, where the top players from around the world will compete. There will also be a "World Series Showdown" in August that will mark the end of the first half of the season, and of course, the "World Finals" that will determine this year’s champion. The number of participating countries and territories for this season has increased to 61, meaning that the "FIA Gran Turismo Championships" is continuing to evolve into a true global event.

Every race will be broadcast on our official "Gran Turismo TV" YouTube Channel and on "Gran Turismo Live." Therefore, fans from around the world will be able to watch the exciting battles between the best players in the world in the comfort of their own homes.

"The FIA GT Championships" started as a motorsports competition series certified by the Fédération Internationale de l'Automobile (FIA) in 2018 and has produced many iconic battles since its inauguration. In last year’s series, not only did Japanese driver Takuma Miyazono become champion of the Nations Cup, he was also part of the winning team that took the Manufacturer Series, joined Mikail Hizal (Turkey) and Daniel Solis (USA) for Team Subaru. What sort of drama awaits the drivers in this, the fourth year of the championships? Tune and see for yourself!

For details regarding this year’s schedule and how to participate in the Championships, please refer to the ‘FIA Certified Gran Turismo Championships 2021 Series Overview’.

Due to the effect of COVID-19, we are missing the atmosphere of our World Series events and the opportunity to meet our wonderful competitors directly, but we’re lucky that we can still test new ideas and continue to grow the FIA Gran Turismo Championships even in this online environment.

We’re excited by the new format of this year's series and by the developments in our broadcast production integrating new technologies; we are certain that we can show everyone even more exciting racing. While we are looking forward to getting back to meeting up with competitors and fans in person, we feel it is right to keep the Championships purely online in 2021. I wish all competitors, both those that we already know in person and those that will be up and coming this year, the best of luck in their way through a competition involving several million of people, and thanks for their continued support.

I’m convinced that we will see some breath-taking, high-level racing again this year.

We are entering the fourth year of a very strong relationship with Gran Turismo and it has been such a success. Digital Motor Sport has come to the fore during the pandemic, and it was great to see so many competitors taking part in the Championships last year and to watch such an exciting World Finals. With previous winners from Brazil and Germany joined by last year’s winner from Japan, this is proving to be a truly global series.

Aware of the need to bring the discipline’s stakeholders together in an ecosystem that benefits everyone, the FIA has worked on a strategic plan for Digital Motor Sport, which aims to promote its inherent qualities, namely mass participation, diversity, its affordability and its potential to drive interest in motor sport and become a grassroots discipline in its own right. The FIA Certified Gran Turismo Championships are one of the key assets of this strategy and we strongly believe that the future is bright for this new form of racing! 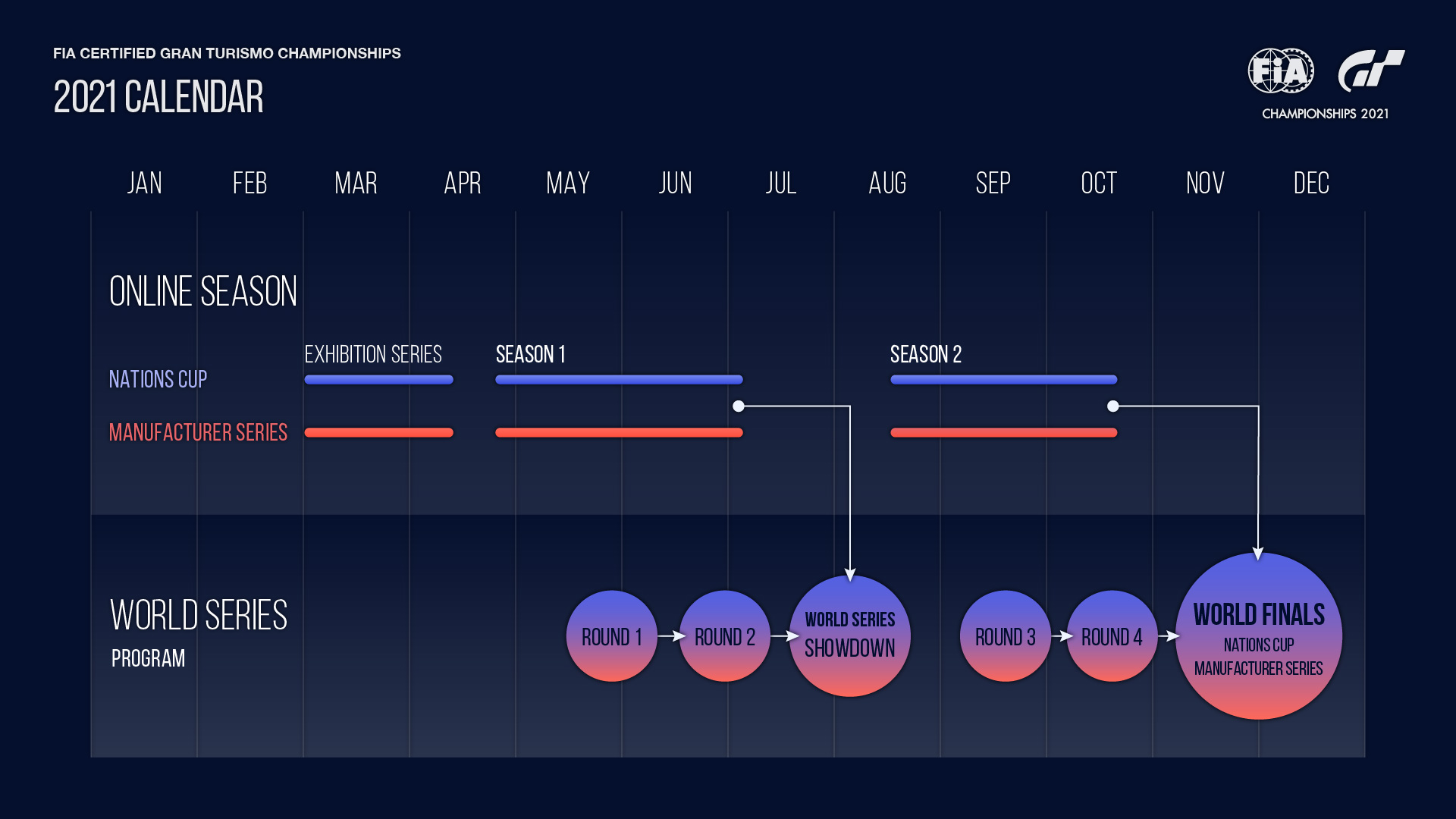 A total of four rounds separated into two seasons will be scheduled in June, July, October, and November. The top competitors of the world will battle to secure a place in the World Finals.

The World Series Showdown is scheduled for August 21 and 22. On the line here is a spot in the Season 2 lineup. Competitors will consist of the 2020 World Finalists and the top competitors of the 2021 Online Series Season 1. In this critical race, up to 10 World Series points can be acquired by the competitors, giving those going to the World Finals an advantage in the final battle.

Planned to be held on December 3 through 5. This final event will determine the Nations Cup and Manufacturer Series Champions for 2021.