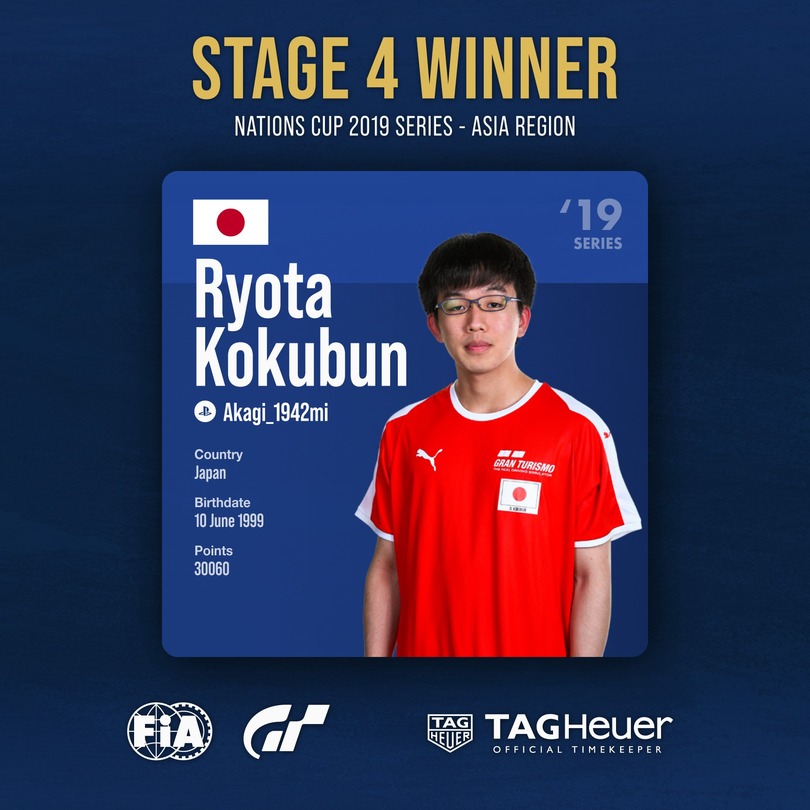 The fourth stage of the Nations Cup got underway on August 3rd. Just like the previous stage, it promised to be a hotly contested showdown between Japan's Akagi_1942mi, who started with a formidable overall lead, and his compatriot Kerokkuma_ej20.

Japan's Akagi_1942mi got into the scoring habit early in the stage, racking up 2,806 points in Round 31. Kerokkuma_ej20, on the other hand, did not enter any of the races until the very last one: Round 40's "Superstars" race.
The stage's final race took place on the Autodrome Lago Maggiore - GP circuit. It was a one-make race, featuring the X2019 Competition car that is also used in the World Tour.
Japan's Kerokkuma_ej20 made use of all the experience he had acquired in the World Tour and in national and regional races to deliver an explosive performance in qualifying and grab pole position.
Akagi_1942mi, on the other hand, started in fifth place on the grid, but managed to move up to fourth on the very first corner. Despite this early surge, however, he was unable to close the gap on Kerokkuma_ej20 in first place.

It was a super-high-speed nine-lap race, but Kerokkuma_ej20 never looked like relinquishing his lead. He went pole-to-win to grab a very impressive 3,362 points for himself and Japan.

Despite this magnificent performance, however, Kerokkuma_ej20 wasn't quite able to overhaul his compatriot, missing out on the series title to Akagi_1942mi by a mere 58 points. Looking back, Akagi_1942mi had dominated all four stages from start to finish, but it is also fair to say that his dominance is not quite as overwhelming as it was, with a number of rivals starting to close the gap. Will there be a new champion next season? Watch this space!