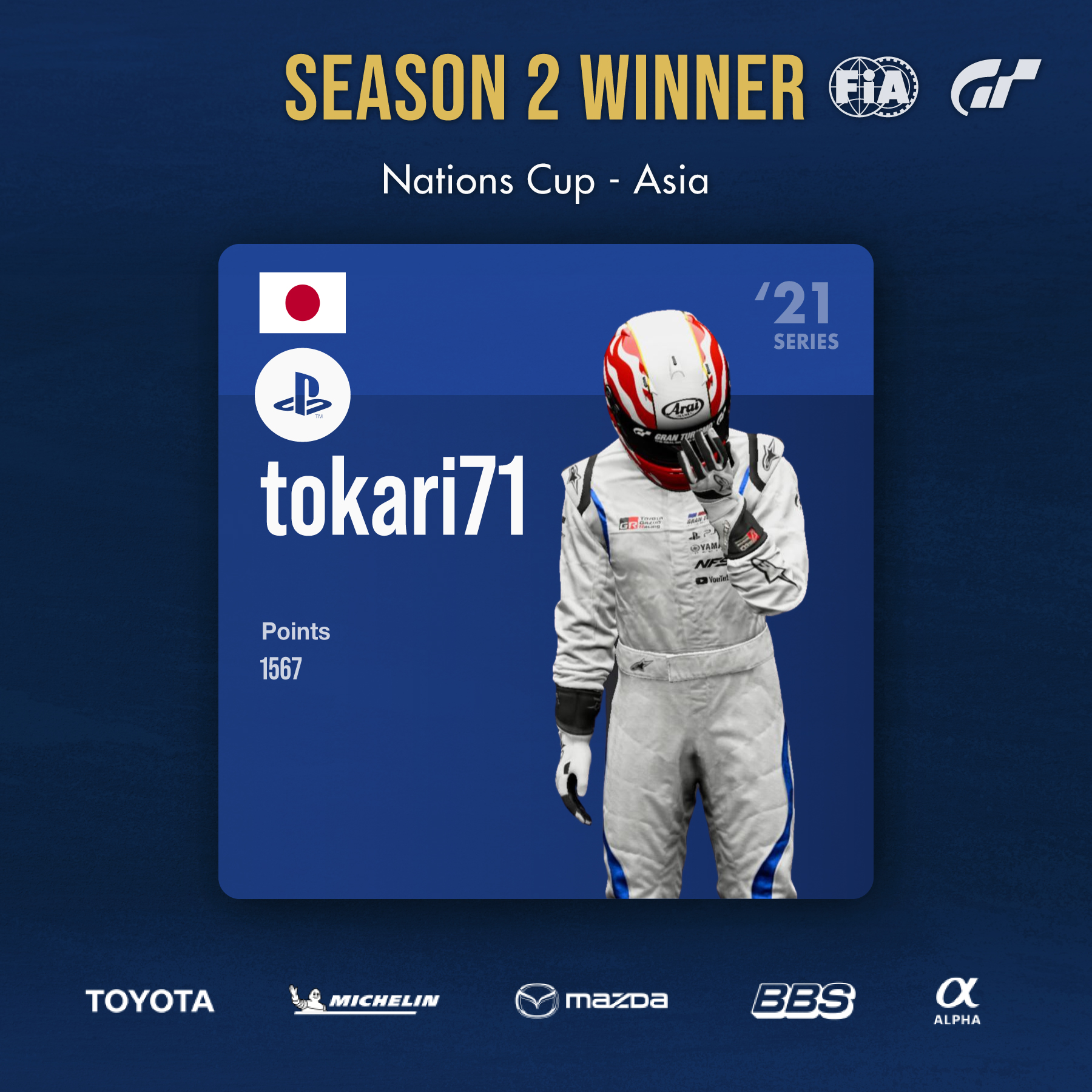 Round 1 took place at Autopolis. It was a one-make race,featuring the all-new Toyota GR 86 ’21.

The speed of the next generation of under-18 drivers, ofwhich we’d seen glimpses in Season 1, was immediately apparent in Season 2 aswell. In the first round, Japan’s tokari71 started in fifth place on the gridbut gradually overtook a number of his rivals. He eventually took the lead onthe sixth lap, overtaking his compatriot Kerokkuma_ej20 while he was taking apitstop.

tokari71 would go on to hold off challenges from fellowJapanese Yamanaka (yamado_racing38) and Kawakami (SG_Kawakana)—both world seriesdrivers—to cross the finish line in first place. It was a fine victory againstimpressive opponents that earned him 398 points.

tokari71 had got off to a dream start, therefore, but it wasanother Japanese driver, Iseri, who won Round 2, claiming 383 points in theprocess.

Both would go on to add to their points totals in thefollowing rounds, until tokari71 really changed the course of proceedings inRound 5.

Round 5 took place on Special Stage Route X, an enormous30.283km oval track. It featured N400 cars doing battle at high speed, andseeking to make the most of their rivals’ slipstreams. It is said to be acourse that gives all drivers an equal chance of victory, and so it proved. tokari71started in 11th place on the grid, but by the final lap he waswithin striking distance of the leading group.

In a stroke of luck for the youngster, an accident tookplace in the leading group as the race entered its final stages, allowing tokari71to take advantage of the confusion and slip into first place. This dramaticvictory netted him a massive 408 points, putting him in a great position goinginto the second half of the season.

Iseri also managed to score points in the last three rounds,but it was not enough to close the gap.

In the end, tokari71 won the Season 2 title with a lead of109 points over Iseri in second place. It was a huge margin of victory—by farthe biggest ever seen in any region!

Asia seems to be home to a number of eye-catching youngtalents, with tokari71 foremost among them. A number of other teenage talentsalso improved dramatically this season, and are sure to achieve great things inthe future.

V1_CRV-KRT86, for example, is a driver who has competed inthe All-Japan e-Sports Championship. He had challenged for a top spot inprevious seasons but often ended up getting dragged back into the chasing pack.In Round 10, however, he scored a very impressive pole-to-win victory, whichallowed him to finish just behind Iseri in third place.

The season really showcased the depth of young talent thatJapan has at its disposal—drivers that are sure to help it dominate the Asianregion for years to come. Who will be the next great hero? We’ll just have towait and see!