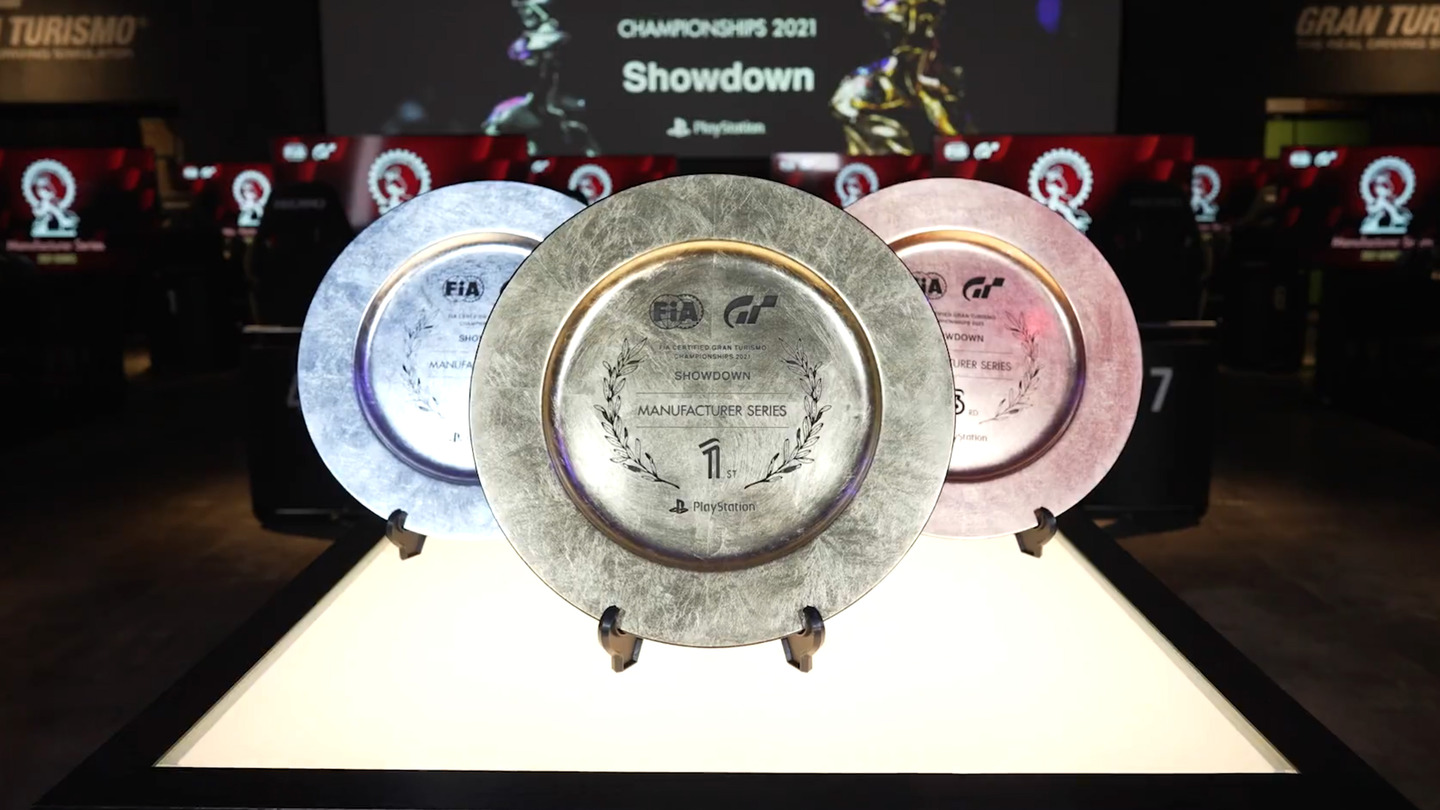 Tokyo, Japan (August 21, 2021) - The FIA Certified Gran Turismo Championships reached the halfway point of the 2021 Series today with the World Series Showdown. First up was the Manufacturer Series, and a battle between 36 drivers representing 12 of the world’s biggest car makers.

The 12 Manufacturer Series teams – selected from their results in Season 1 of the Online Series - were required to field three drivers, one for each race. Points would be awarded for each race with, as ever, double points for the Grand Final.

The early odds-on favorites to take the Manufacturer Series crown were Toyota, Porsche, and Subaru, but as always with the World Series races, the chance of seeing a surprise winner was not just possible, it was more than likely.

First up was a 10-lap contest around the rustic Alsace - Village course in France, where Japanese driver Tomoaki Yamanaka (yamado_racing38) put his Toyota GR Supra Racing Concept on pole after posting a blistering lap time of 1:48.352. Occupying the No. 2 spot was the Volkswagen Beetle with Roberto Sternberg of Brazil behind the wheel (VRBT__Amarok23), while German driver Miroslaw Kravchenko (V1_Miro) in the Mazda RX-Vision GT3 took up the No. 3 spot. Behind him was perennial powerhouse Baptiste Beauvois (R8G_TSUTSU) of France in the Mercedes-Benz AMG GT3. Each car was required to run at least one lap on both soft- and medium-compound tires, which meant that every team needed to pit. 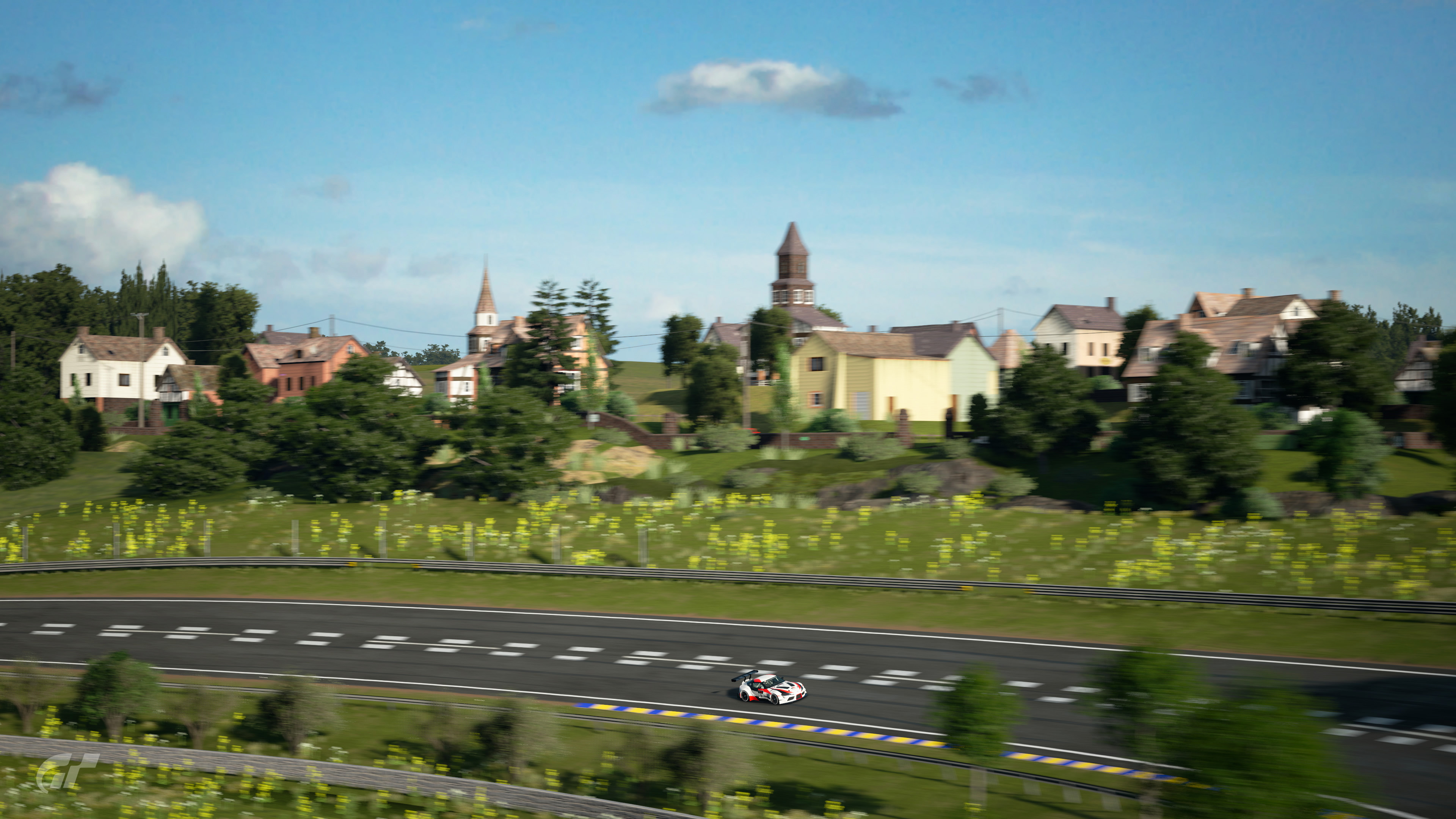 The rolling start saw the Toyota Supra GR, the only one in the top five positions with the soft-compound tires, immediately pull away from the pack. By the end of Lap 1, Yamanaka had opened up a two-second lead over Sternberg, Kravchenko, and Beauvois. Mario Straka of Slovakia (KKR_Mario), piloting the Nissan GT-R Gr.3 and the only other driver aside from Yamanaka to start the race on soft-compound tires, overtook the Jaguar F-Type driven by Ádám Tápai of Hungary for 5th place. 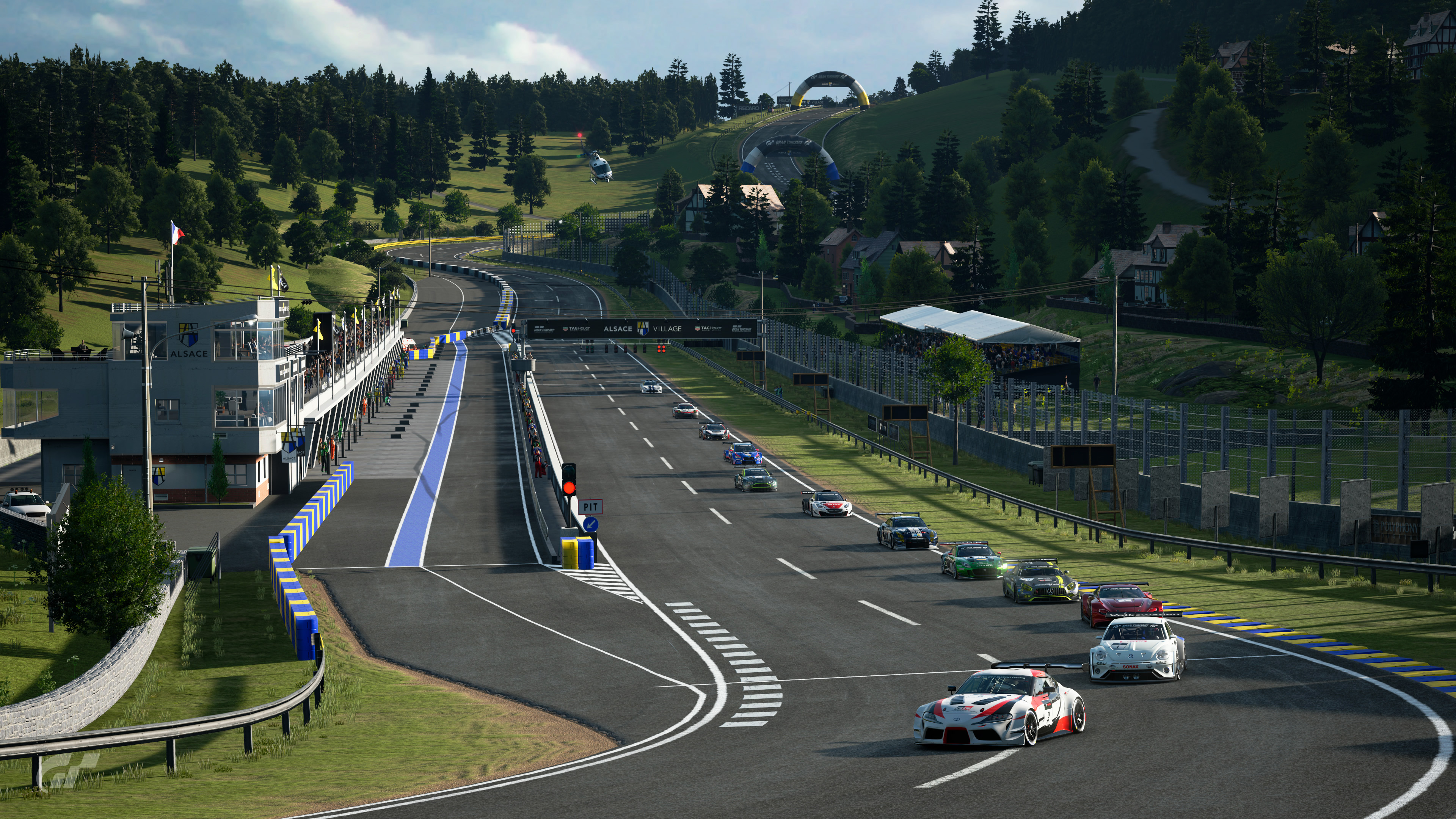 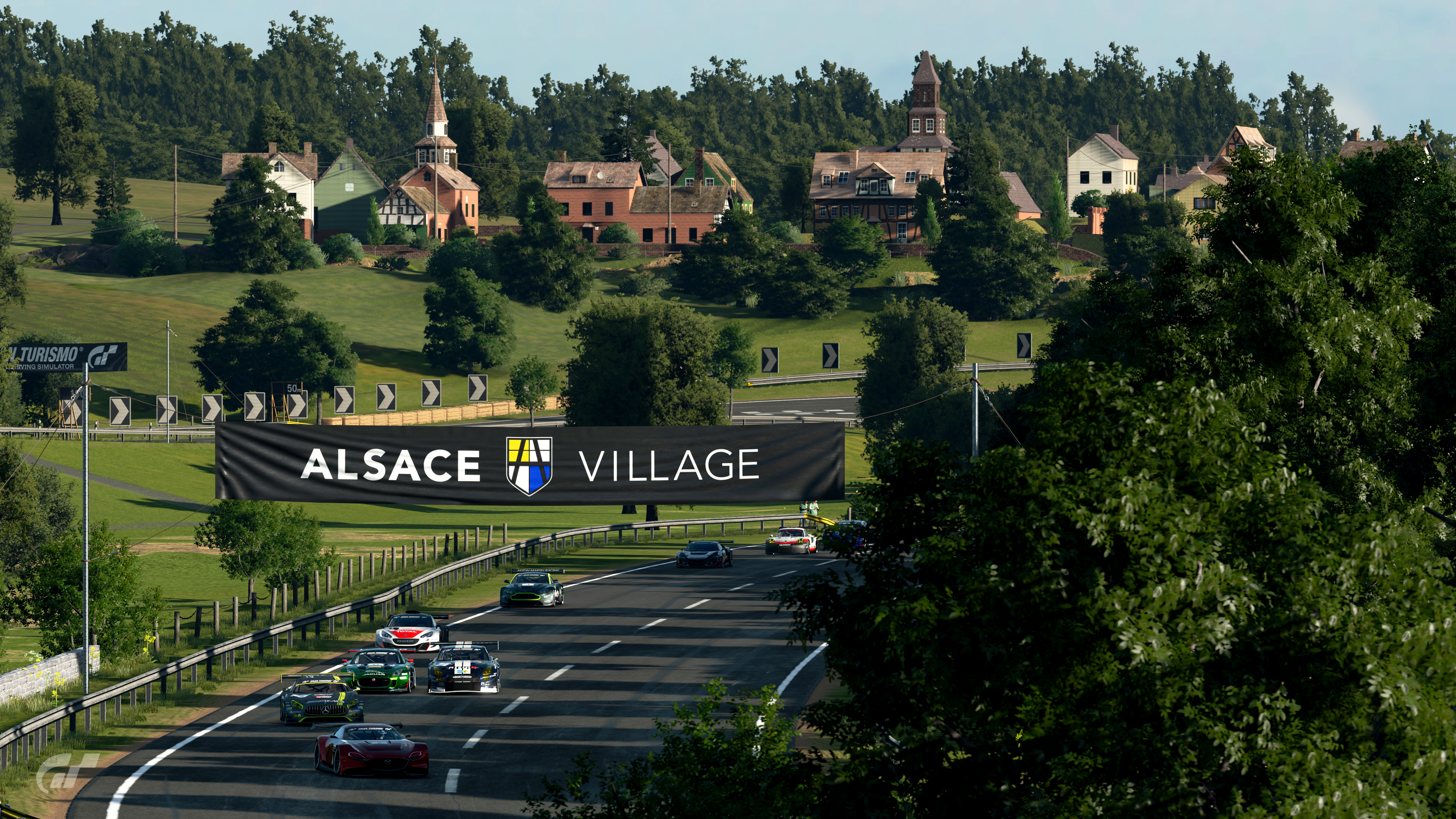 Taking full advantage of the softer and stickier Michelins, Straka moved up another position to P4 after out-braking Beauvois (Mercedes-Benz) into Turn 4 of lap 3. This lap also saw a host of cars diving into the pits, including Beauvois and Kravchenko (Mazda), as they looked to take on the soft-compound tires and run down race leader Yamanaka, who had built up a 4.0-second lead by this point. Second-place Sternberg pitted the following lap, while the Toyota Supra stayed out.

The halfway point of the race saw a furious battle ensue between Beauvois (Mercedes-Benz) and Sternberg (Volkswagen) as they wrestled for 4th place. Meanwhile, race leader Yamanaka took his mandatory pitstop, swapping to the medium-compound tires and returning to the track with a 2.7-second cushion over the 2nd-place Mazda RX-Vision of Kravchenko.

With the cars reaching 200-plus km/h on the front straight, the Mazda RX-Vision (Kravchenko) and the Volkswagen Beetle (Sternberg) trimmed the Toyota’s lead to under three seconds by the end of lap 7... but Christmas came early for the Japanese driver when a furious duel broke out between Sternberg and Kravchenko. With the RX-Vision GT3 busy holding off the VW Beetle Gr.3, Yamanaka built his lead back up to more than three seconds on the penultimate lap, ensuring a Toyota victory. 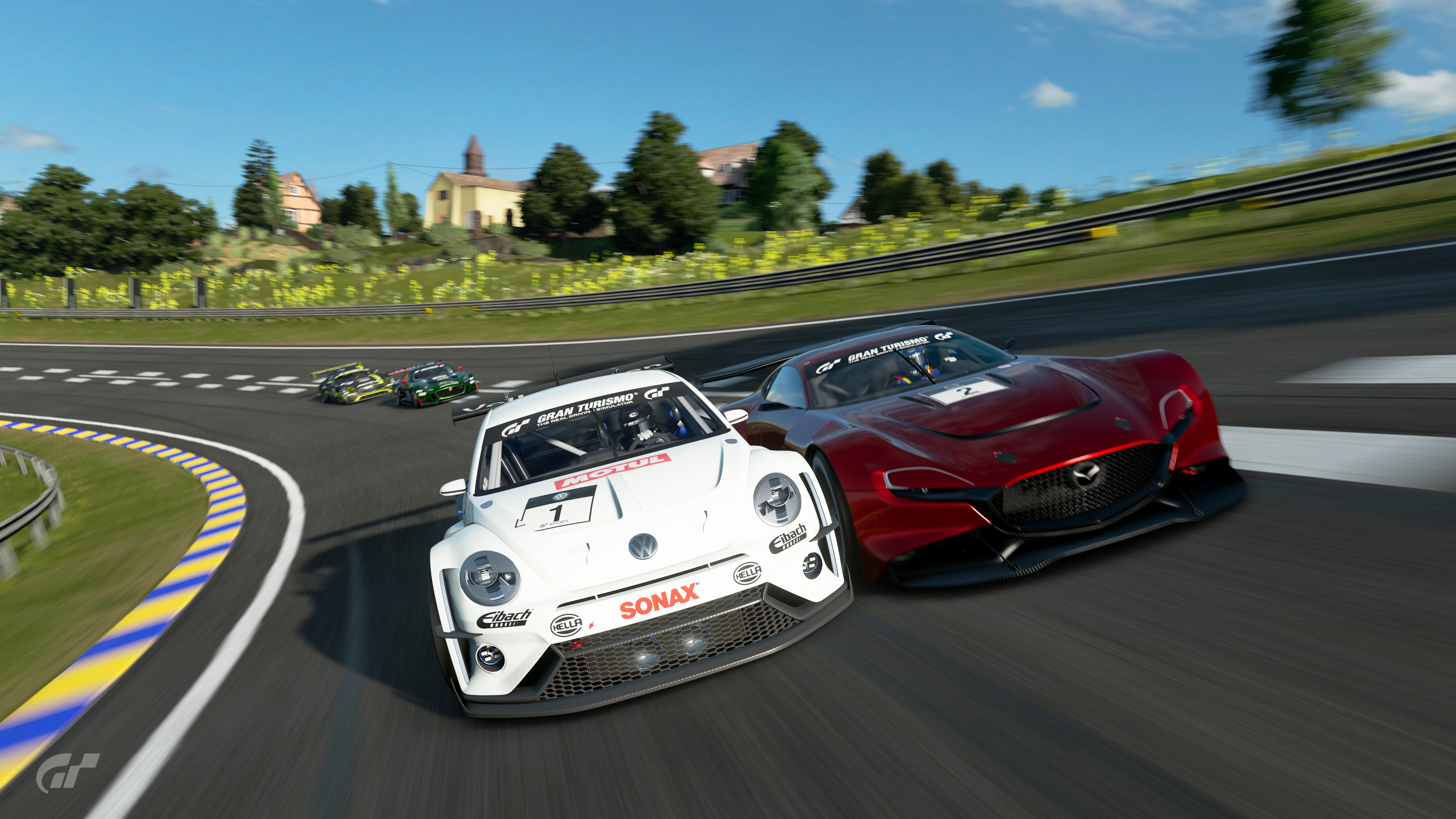 The final lap had everyone on the edge of their seats as the Mazda and Volkswagen took their battle to another level. Sternberg (Volkswagen) overtook Kravchenko (Mazda) for 2nd place through Turn 4, but the German took it right back couple of corners later. Then, when the Mazda RX-Vision went wide through the Turn 8 sweeper, the VW reclaimed the Number 2 spot. As these two cars sparred, the Jaguar F-Type of Tápai snatched 4th place away from the Mercedes-Benz AMG GT3 (Beauvois). When the dust had settled, it was Tomoaki Yamanaka’s Toyota Supra Racing Concept that crossed the finish line first, with the Japanese driver putting in a flawless performance and scoring a big 12 points for his team. Roberto Sternberg earned 10 points for Team Volkswagen, while Miroslaw Kravchenko’s 3rd-place finish gave Mazda 8. 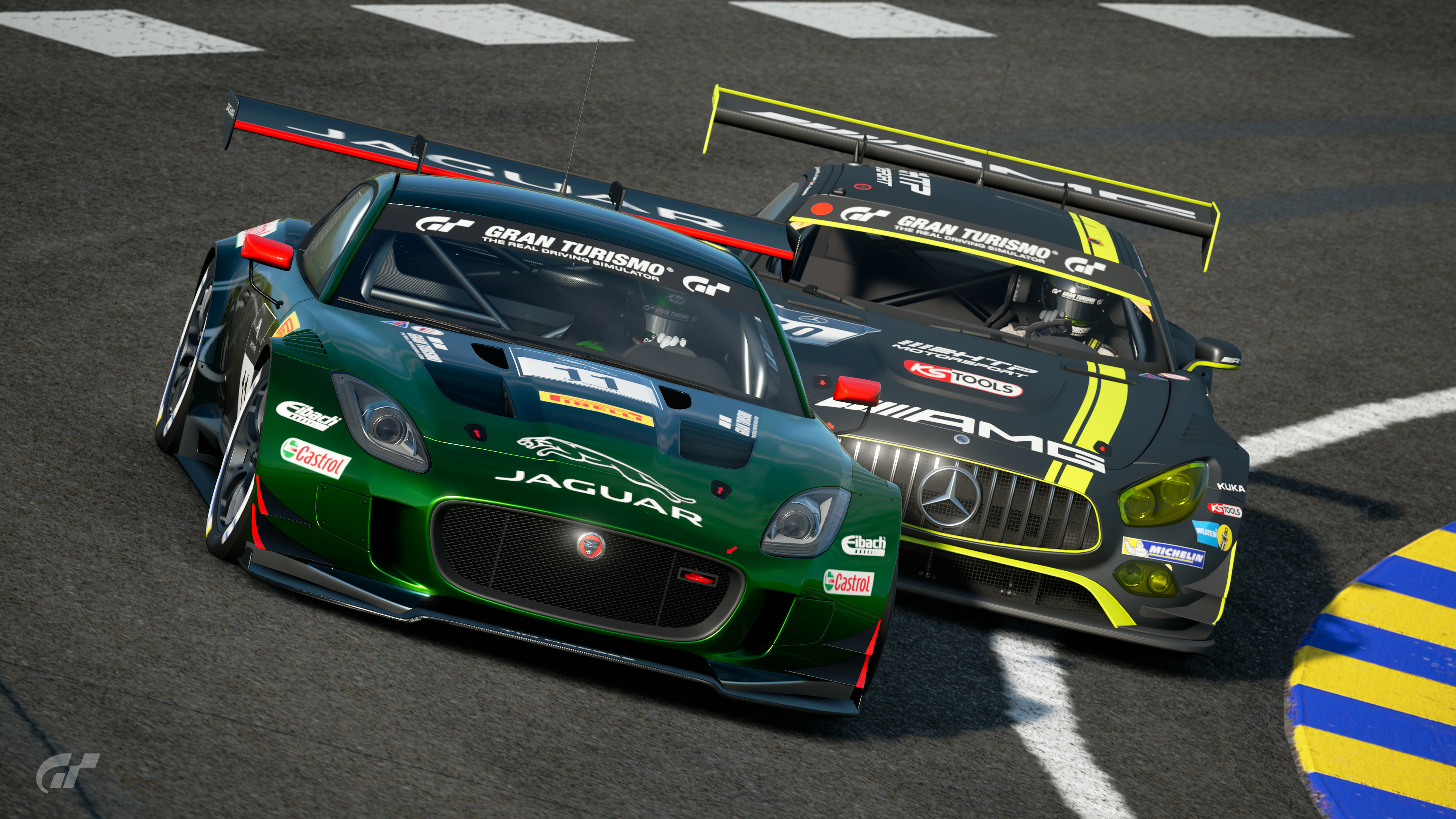 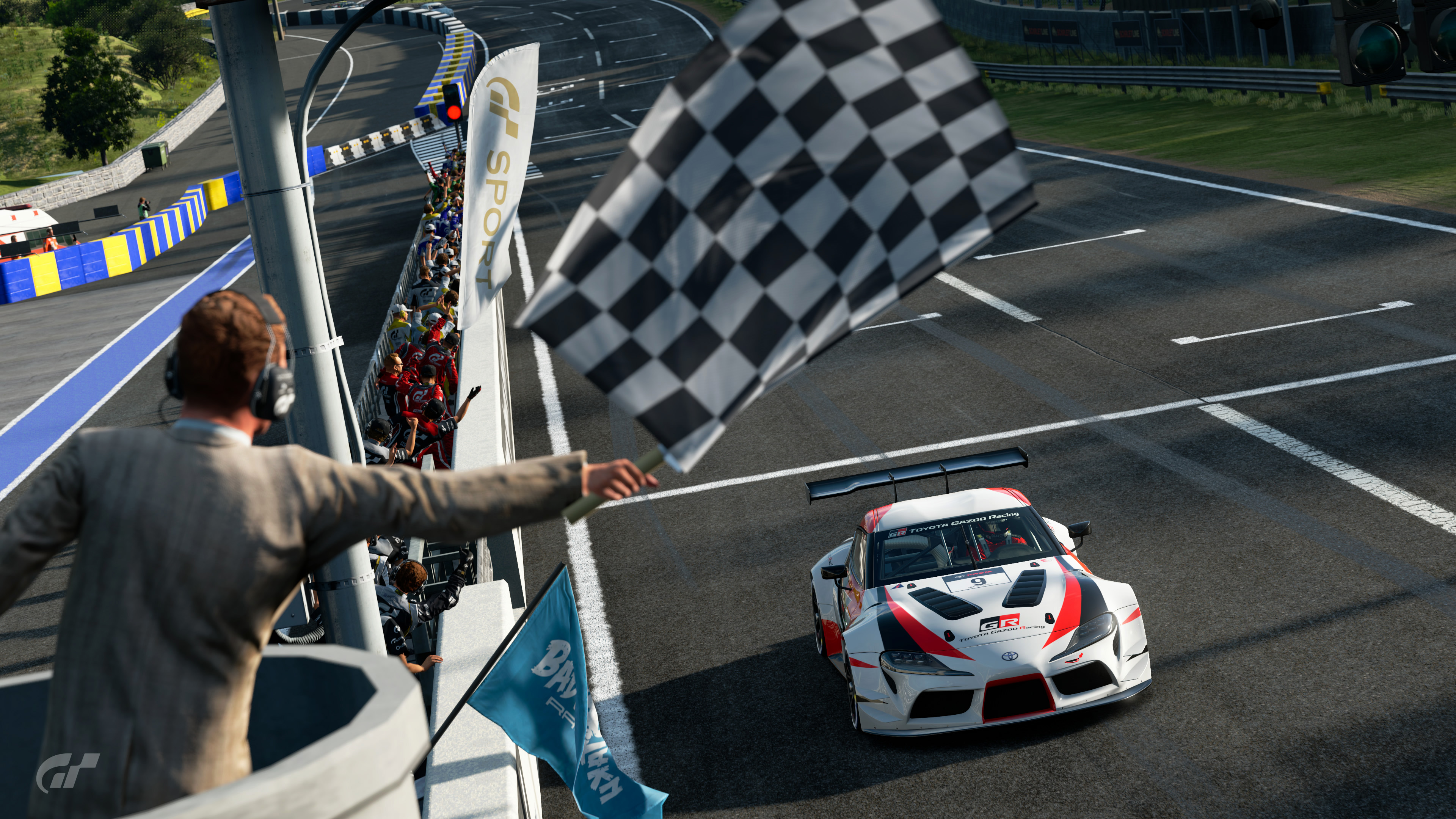 The second race of the day was a 13-lap contest around the Autodromo Lago Maggiore - West course. Japanese driver Hiroshi Okumoto (HIROGRAND_1009) surprised everyone by putting his Volkswagen Scirocco Gr.4 on the pole, besting veteran Canadian driver Jeff Gallan (LLOYDZZELITE) in the Mazda Atenza Gr. 4 and Jose Serrano of Spain (PR1_JOSETE) in the Porsche Cayman GT4 Clubsport. Fellow Spaniard Coque López in the Toyota 86 Gr.4 (coqueIopez14) and America’s Robert Heck in the Peugeot RCZ (Robby--Heck) occupied the four and five spots. Unfortunately, due to connectivity issues, Mercedes-Benz failed to qualify for this race.

With no driver or tire changes required, it was a dash to the finish without a single pitstop. The race got under way via rolling start with the Volkswagen Scirocco driven by Okumoto (HIROGRAND_1009) leading the pack through Turn 1, a tight lefthander that leads to a hairpin corner. The running order remained more or less unchanged for the first three laps, until bedlam broke out when Chilean driver Fabián Portilla (PerrolocoMcQ) in the Dodge Viper Gr.4 made a move on the back straight to get past the Jaguar F-Type Gr.4 driven by Soma Iseri of Japan (Arrow71sr) for 6th place. This set into motion a series of chaotic events: Iseri returned the favor a corner later when Portilla in the Viper wandered from the driving line. The driving error allowed Alonso Regalado (TX3_Jara) in the Aston Martin Vantage Gr.4 to get past the Viper, leaving it in 8th place. Meanwhile, the top three cars began pulling away from the pack, building a 1.4-second gap between the P3 car of Serrano (Porsche) and the P4 car of López (Toyota). Okumoto and Gallan held onto to 1st and 2nd, respectively. 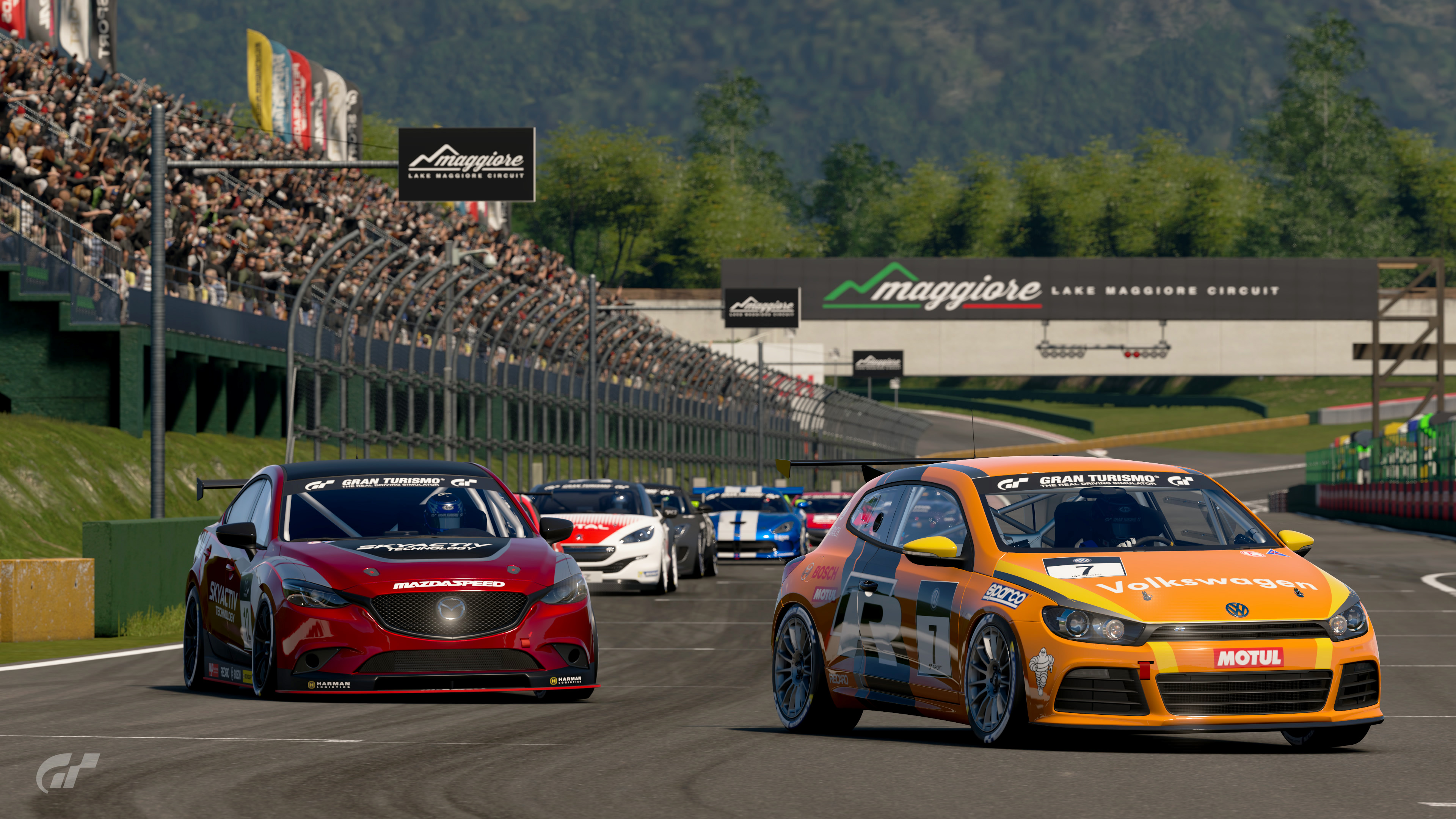 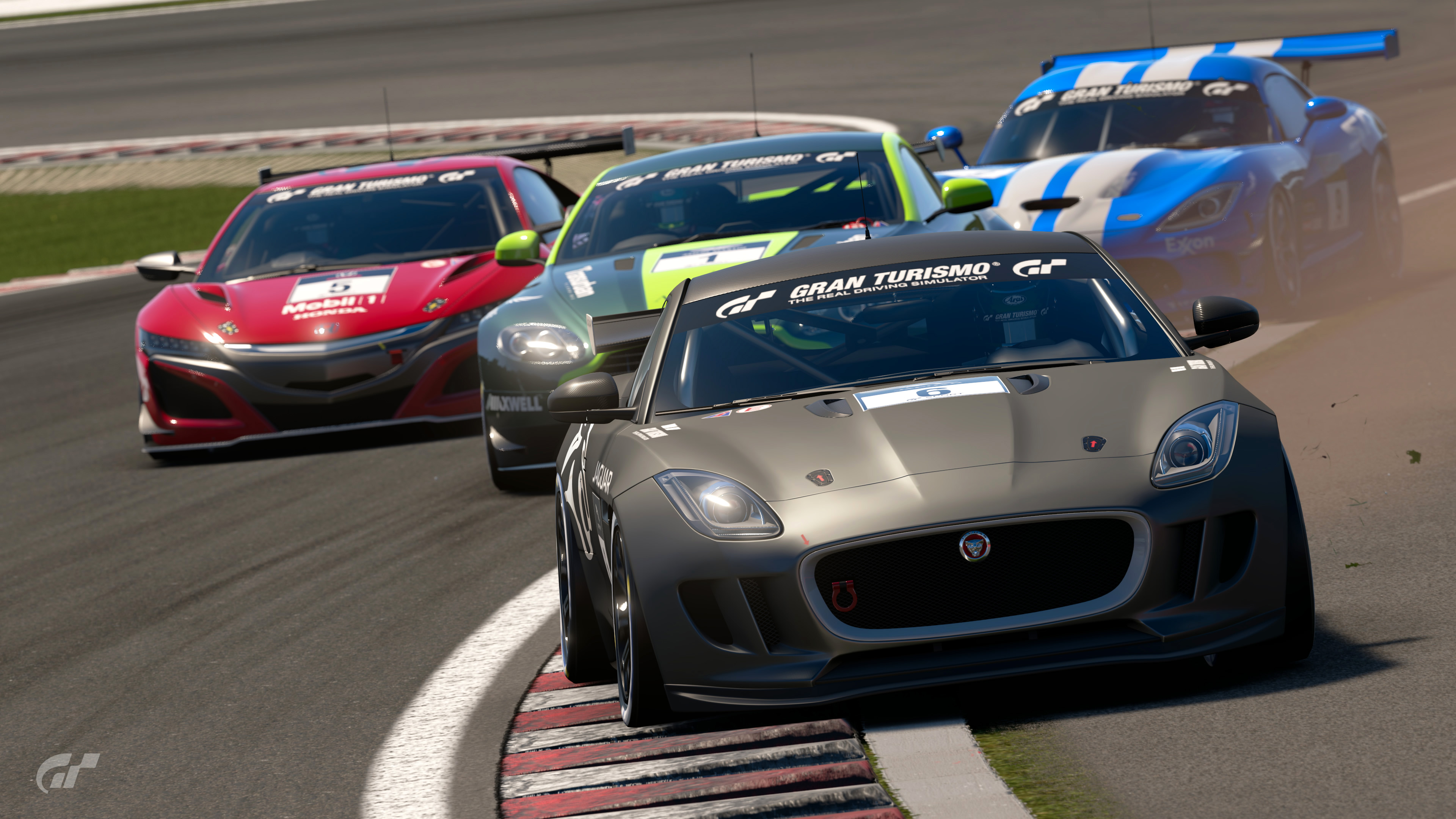 As Okumoto got on the wick, he opened up a 1.3-second lead at the halfway point of the race, a gap that seemed to grow with each passing corner, leaving the others to battle for 2nd place. At the start of lap 7, Serrano in the rear-wheel-drive Porsche Cayman GT4 Clubsport passed Gallan in the all-wheel-drive Mazda Atenza Gr.4 on the front straight to claim 2nd place. The following lap, the Mazda reclaimed the position when on the back straight. The action continued all the way to lap 12, when López in the Toyota 86 looked to get involved in the action, tapping the 3rd-place Porsche’s (Serrano) rear bumper at Turn 1. But Serrano had his concentration focused on getting past the 2nd-place Mazda Atenza (Gallan). The Spaniard got past by the Mazda through the Turn 6 hairpin, followed by López’ Toyota 86 that claimed P3. 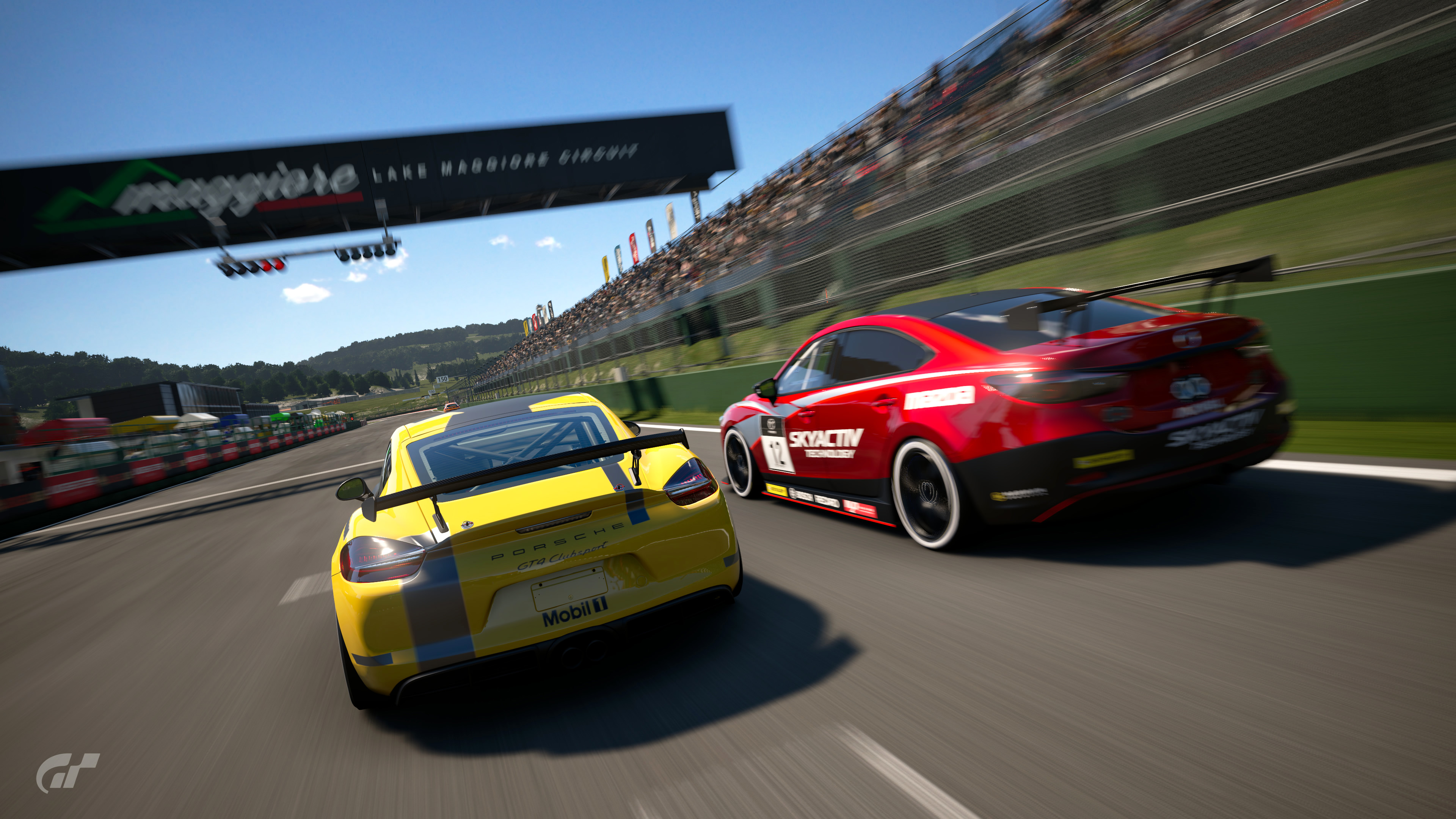 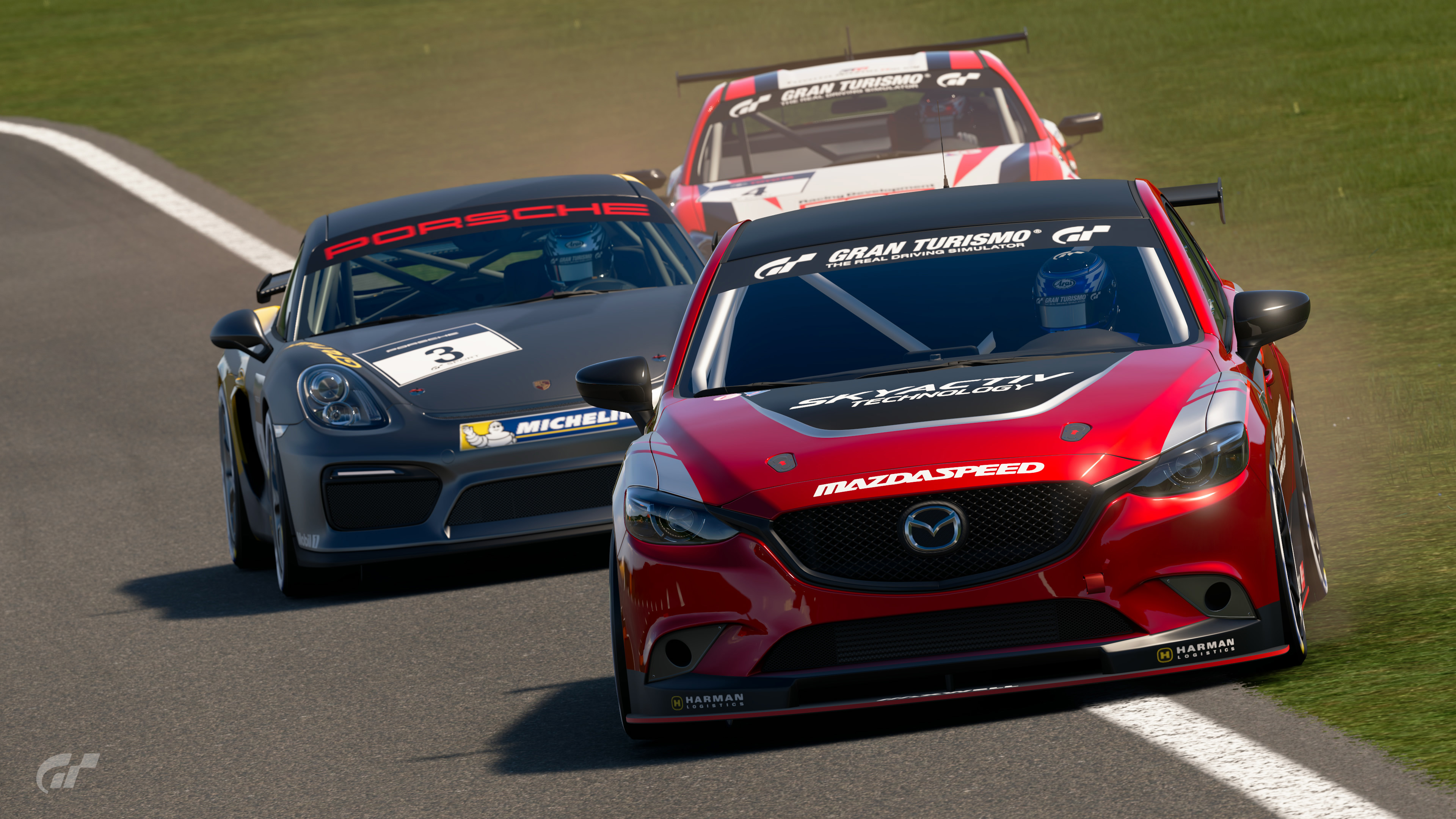 The action dramatically intensified on the final lap as López hounded his countryman for 2nd place, but he failed to keep his eye on his rearview mirror as Gallan (Mazda) was far from done. Gallan stayed to the outside on Turn 10 and remained there while the two Spaniards battled each other. On the next corner, the Canadian snuck to the inside and then went outside of both cars, making a double pass to reclaim P2 on the final corner of the race. It was a brilliant piece of driving that earned Team Mazda 10 points for 2nd place, but this race belonged to Hiroshi Okumoto who led the entire way, giving Team Volkswagen an unexpected lead in the standings with 22 total points. Toyota was right behind with 19, followed by Mazda with 18. 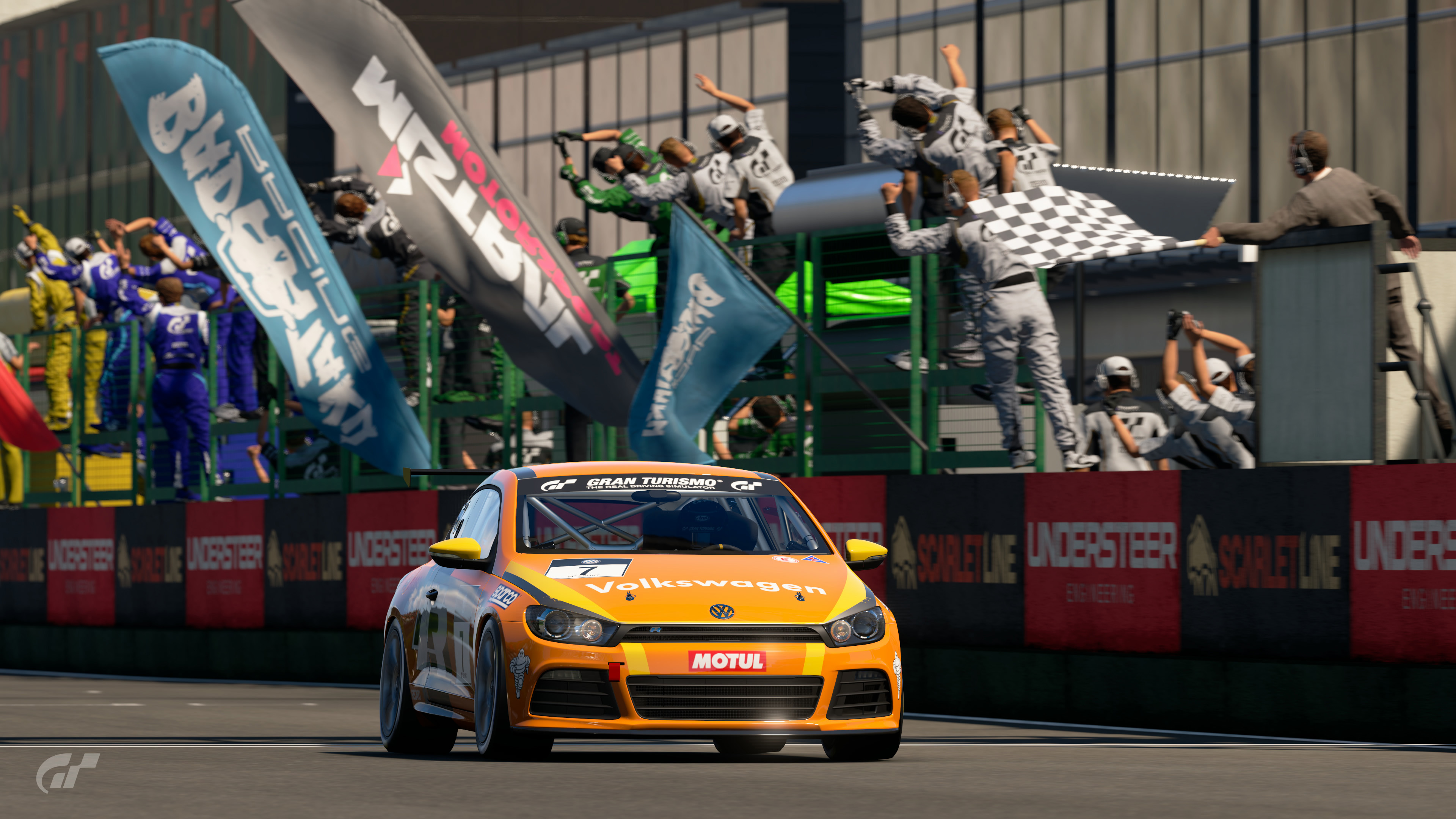 With the points worth double for the Grand Final, even Nissan, which stood last in the standings, had a mathematical chance of stealing away the championship with a victory. Therefore, it came as no surprise that each team sent out their big guns for the final race of the day, a 25-lap marathon around the Dragon Trail – Gardens course. The starting grid was filled with familiar names, including Igor Fraga, the 2018 FIA Certified Gran Turismo Nations Cup Champion, who sat on pole position in the Toyota GR Supra Racing Concept. In the No. 2 spot was newcomer Quinten Jehoul (18 years old) of Belgium driving for Team Peugeot, while 2020 Nations Cup Champion Takuma Miyazono of Japan qualified his Subaru WRX Gr.3 in the 3rd spot. Other drivers to keep an eye on were Ryota Kokubun, also from Japan, driving for Mazda and Italian Valerio Gallo, the Olympic Virtual Series winner, in the Honda NSX Gr.3.

Pit strategy was to play a key role here because each driver was required to complete at least one lap on each of the soft-, medium-, and hard-compound tires. The top two cars opted to begin the race on the soft-compound tires, hoping to build a large lead early and run away from the pack, while Miyazono and Kokubun chose to start on the hard-compound tires and pit early. 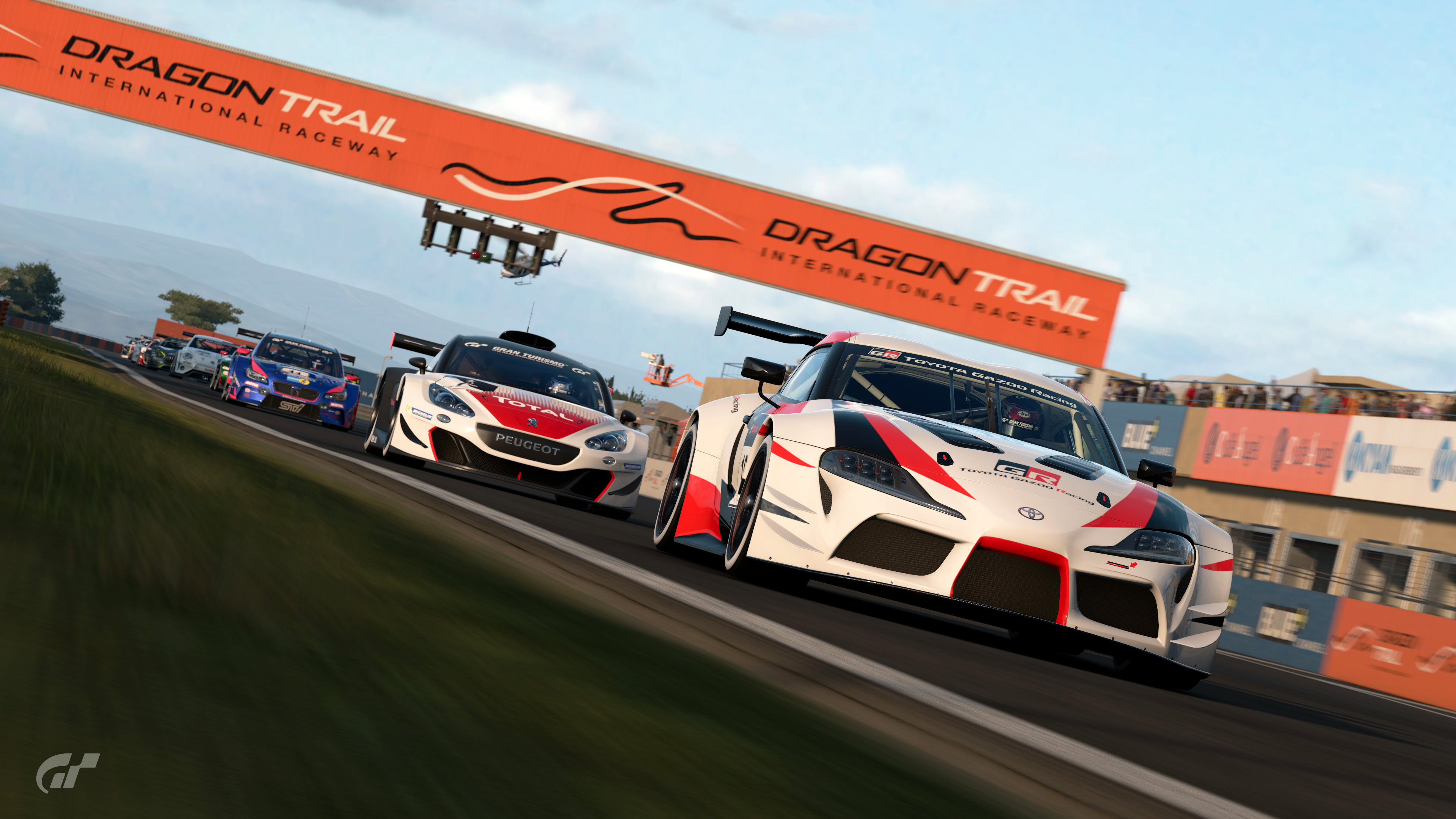 The drivers indeed seemed tight as Jehoul (Peugeot) was assessed an early penalty for going off track and Miyazono (Subaru) gave up his 3rd-place position to Kokubun’s Mazda RX-Vision GT3, all on the first lap. At the start of lap 2, abated by the hard-compound tires, the Subaru and Mazda dropped down the field, with Thomas Labouteley of France in the Volkswagen Beetle Gr.3 claimed 3rd place and Canadian Andrew Brooks in the Jaguar F-Type Gr.3 ran in 4th. At the end of the lap, Lucas Bonelli of Brazil in the Mercedes-Benz AMG GT3 ran in 5th place. 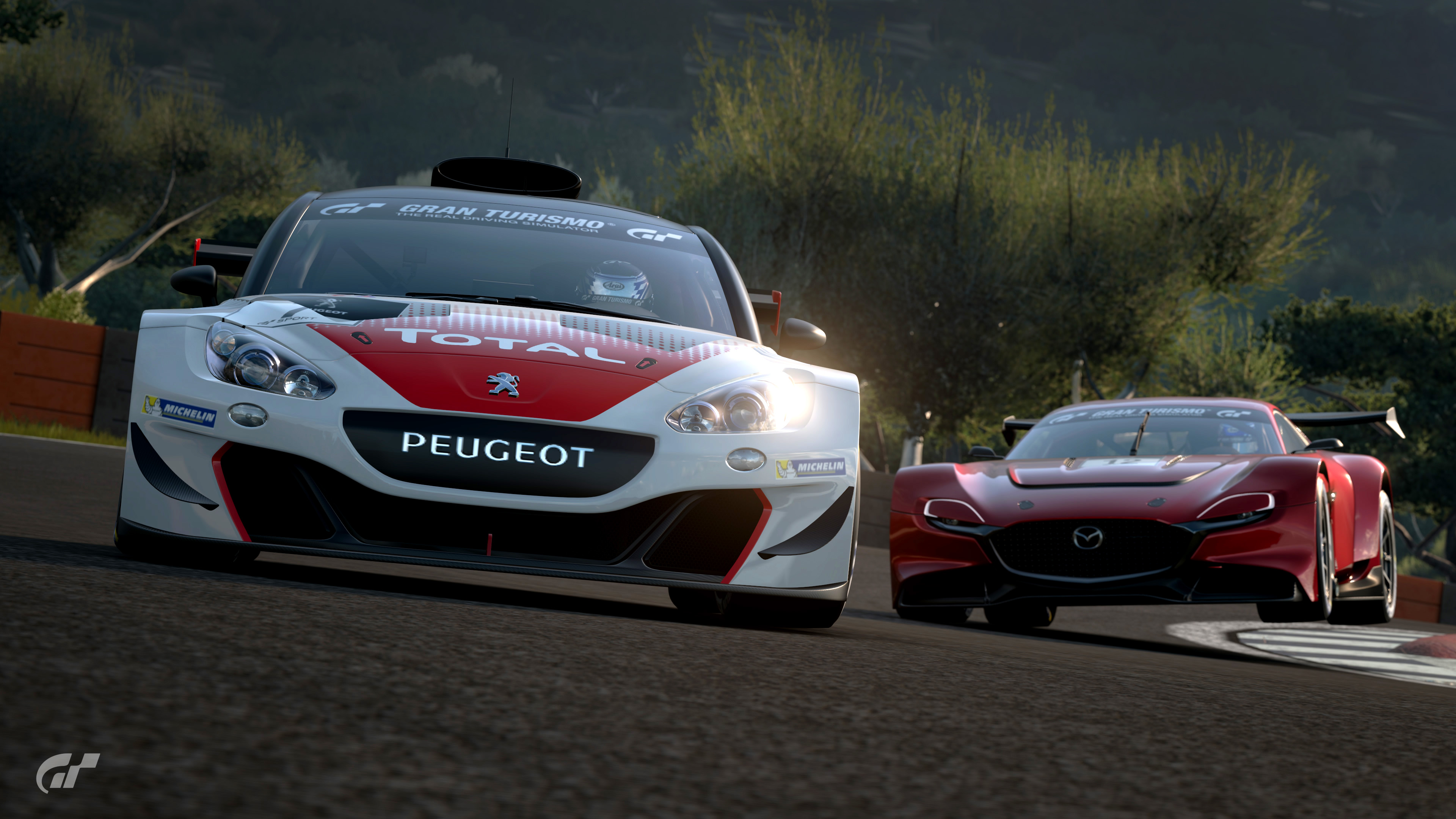 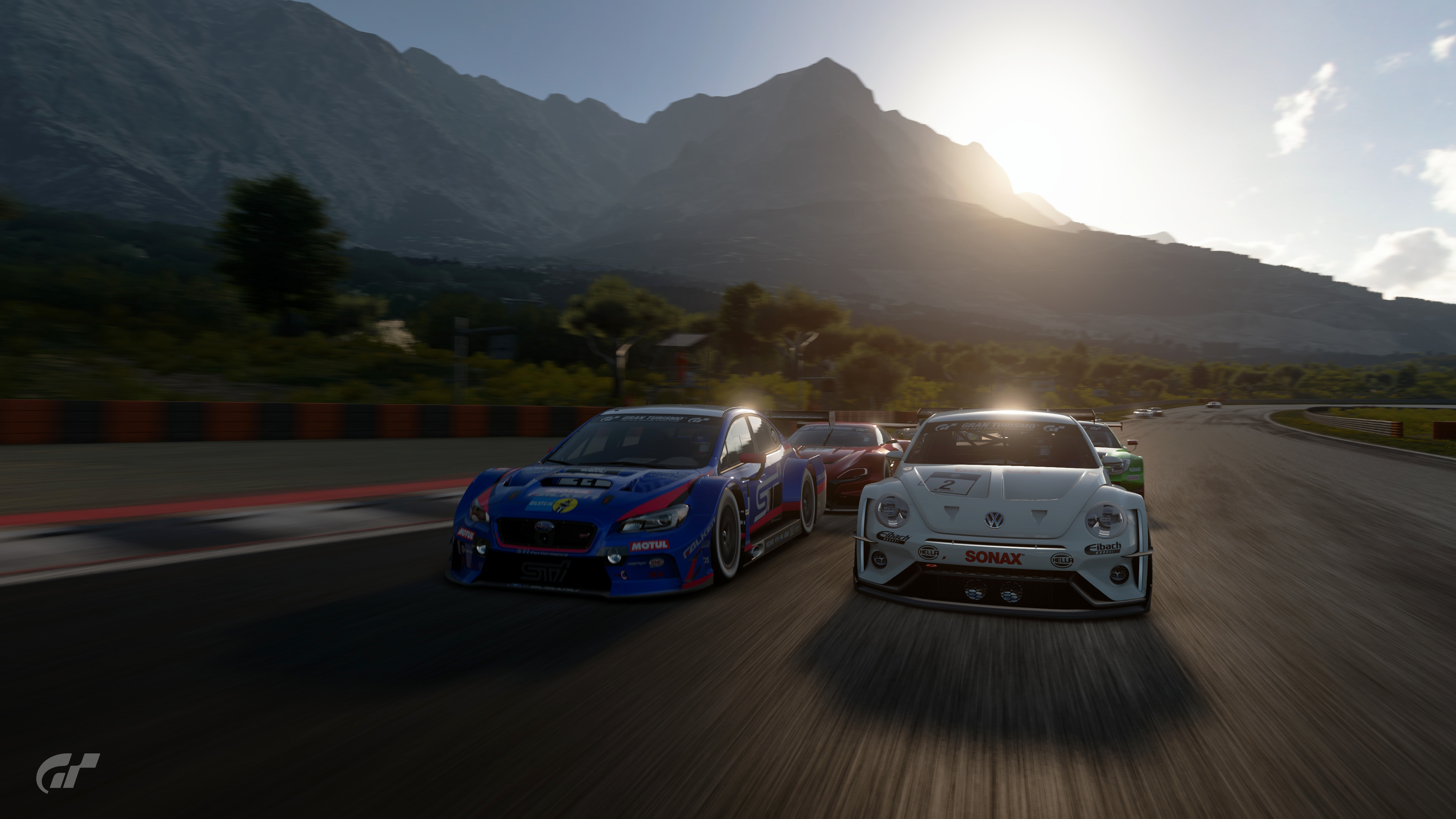 The running order remained largely consistent until lap 10 when the two race leaders, Fraga (Toyota) and Jehoul (Peugeot) pitted, both drivers taking on the medium-compound tires. Thanks to the lead Fraga had built up, he returned to the race with his Toyota still in the lead. Jehoul rejoined the action with his Peugeot RCZ in 3rd place, tucking his car behind the hard-charging Subaru WRX of Miyazono, who was now on the softs. A few laps later, Labouteley’s Volkswagen Beetle, on the soft-compound tires overtook Jehoul’s Peugeot RCZ for 3rd place.

At the halfway point of the race, Fraga was cruising, opening up a 9.0-second lead on the field. The race officially entered its end game when the Brazilian driver made his final pitstop on lap 19 to take on fuel and fulfill his stint on the hard-compound tires. He returned to the track in 6th, but the top five front-runners still had to fulfill their final pitstops, so in essence, he was still in the lead. The next two laps saw a complete reshuffling of the running order when the front-runners came into the pits, handing the lead back to Fraga. In 2nd place was Jehoul, on hard-compound tires, followed by Kokubun, the only one on quicker the soft-compound tires. He had three laps to chase the two leaders down. 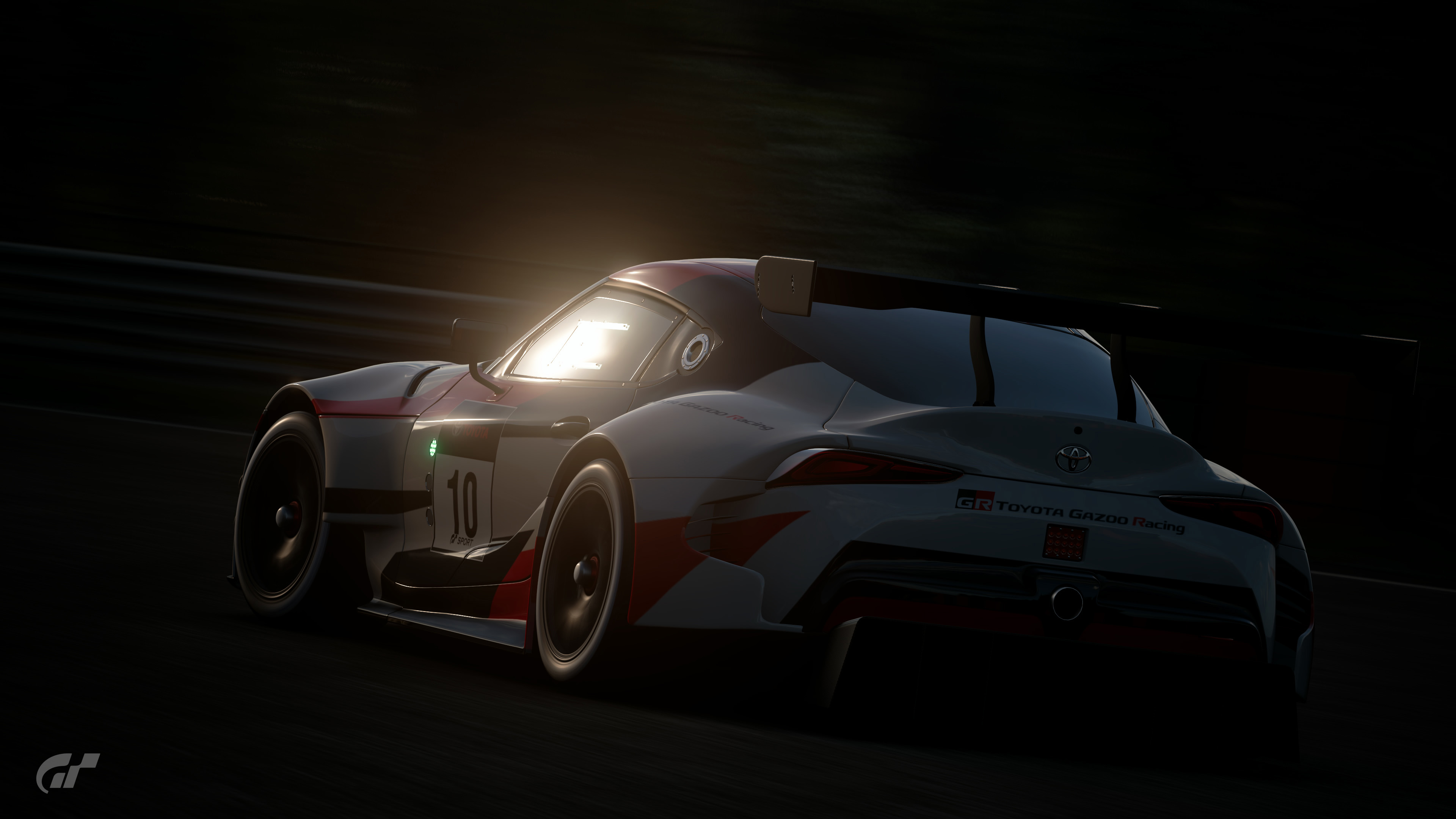 On lap 23, Kokubun (Mazda) made his move through the hairpin, getting past Jehoul’s Peugeot, with his sights set on Fraga and his Toyota Supra. With one lap left, Kokubun closed the gap to less than 2.0 seconds, and with the championship on the line, he unleashed an all-out assault on the Brazilian. However, Igor Fraga showed why he was a Series Champion, keeping calm amid the pressure and taking the checkered flag 1.3-seconds ahead of Ryota Kokubun’s Mazda. The victory gave Toyota the 2021 World Series Showdown win with 43 total points. Mazda finished in a very respectable 2nd place with 38 points, while Peugeot (25 points), Volkswagen (22) and Jaguar (21) rounded out the top five. 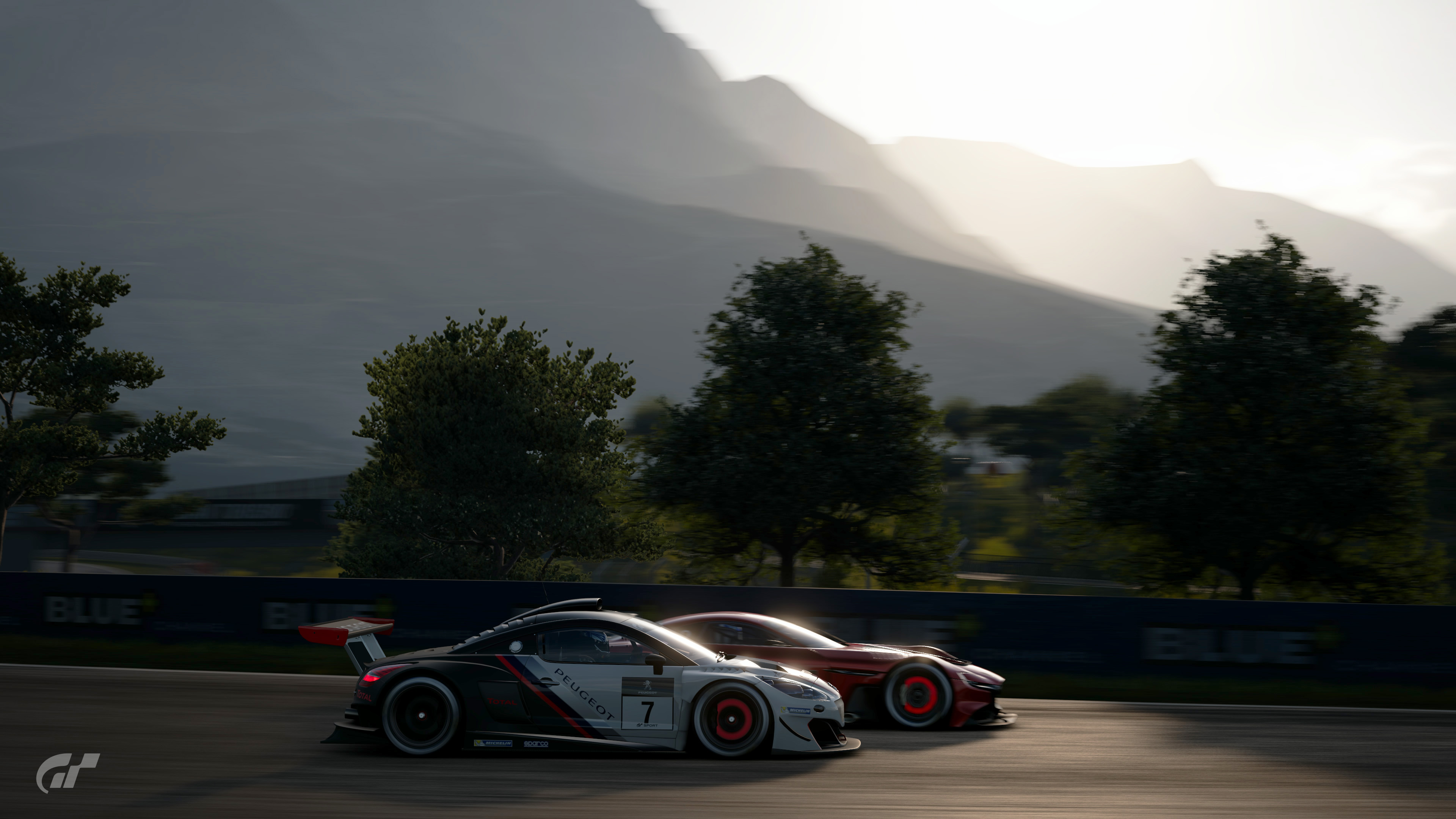 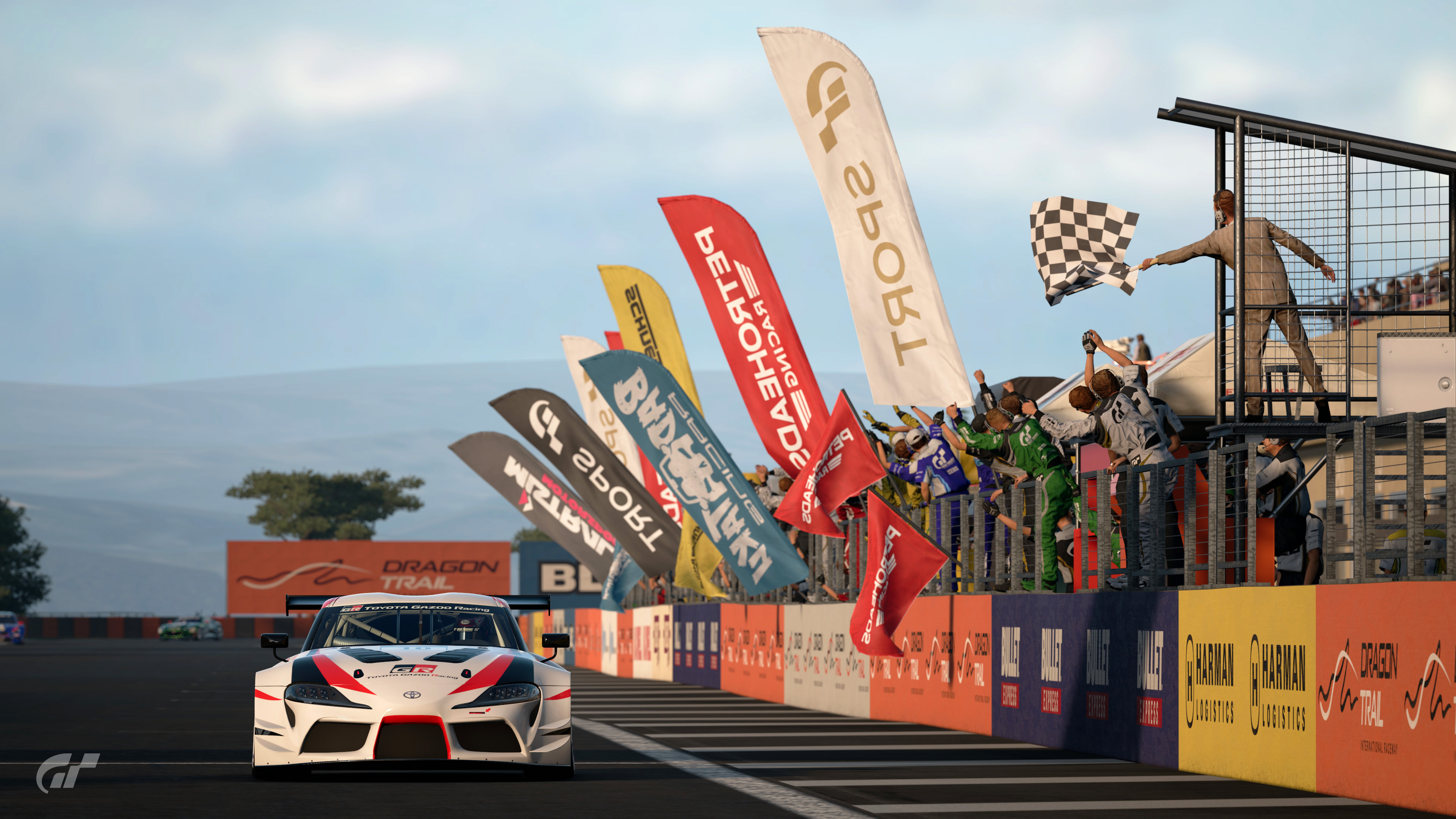 Fraga commented after winning, “I got a lot of help from my teammates Yamanaka-san and Coque, who put us in a good position for the final race. They helped with the winning strategy for the Grand Final, which allowed me to focus on driving. This was important because I didn’t have time to practice much because we only found out about the venue when the Drivers Briefing came out on the day.” 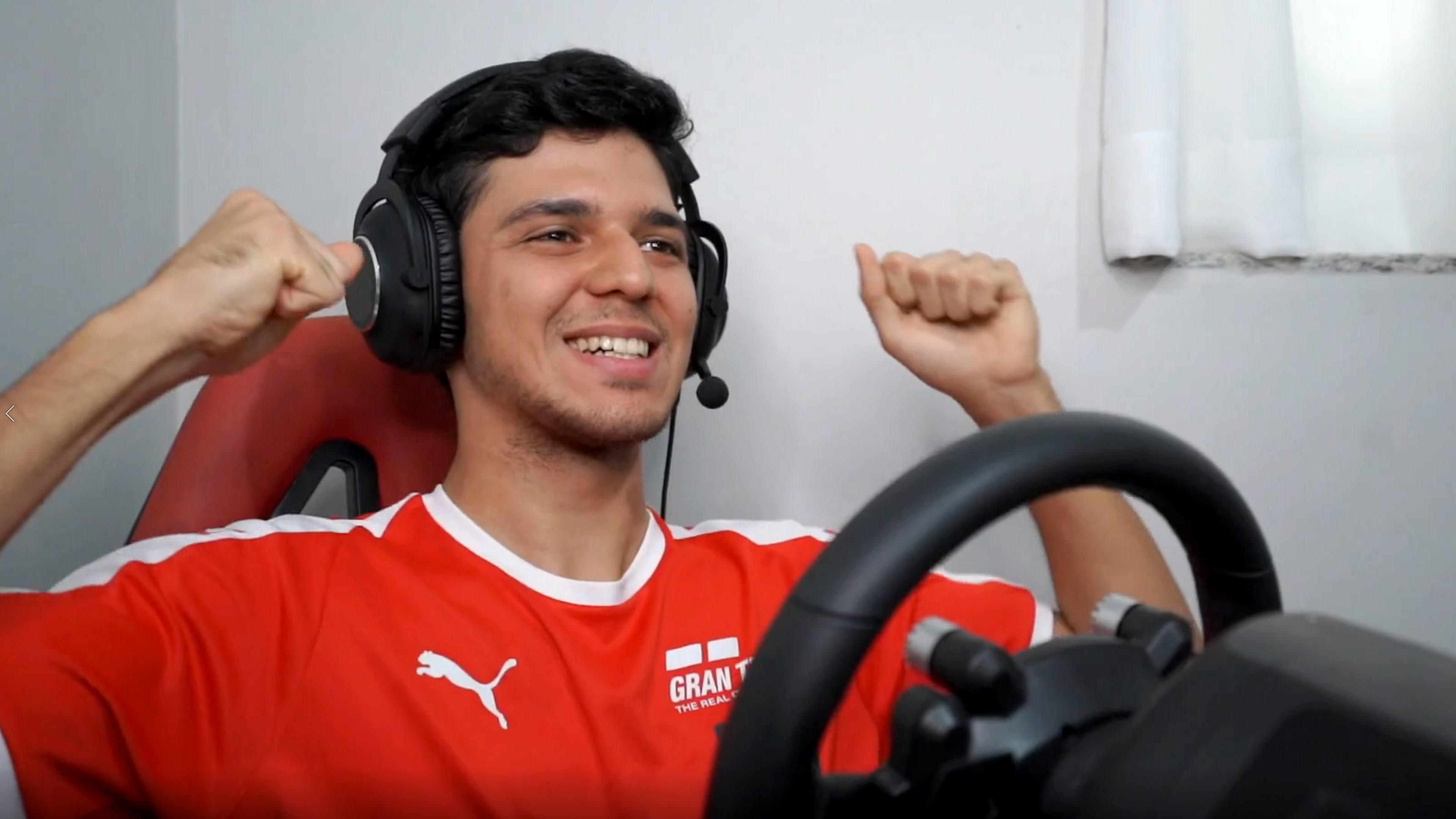 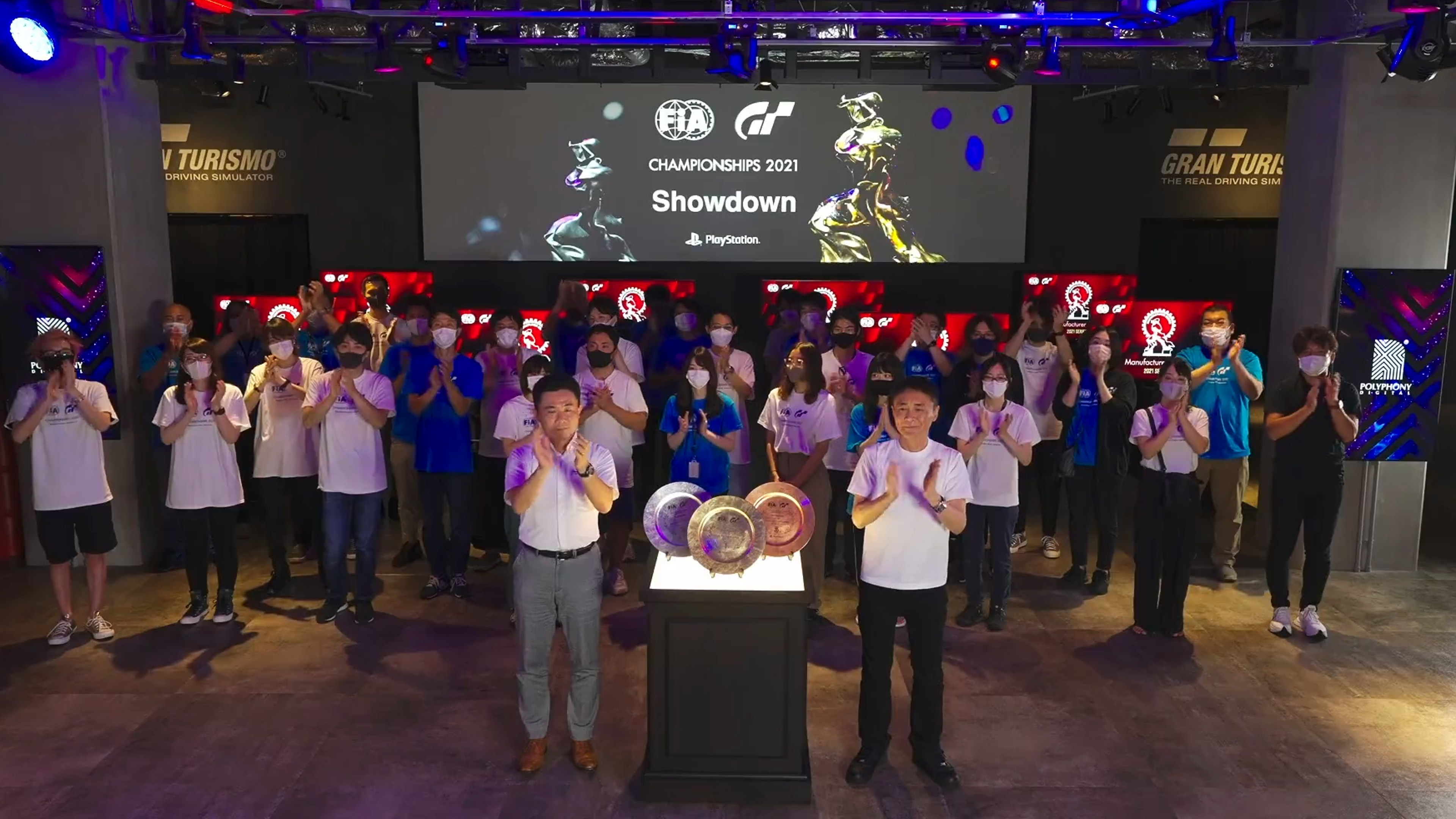 Tomoaki Yamanaka said, “I feel like I can finally relax. I have nothing to worry about anymore because we were able to win. I was able to relax after Race 1, but my heart nearly stopped during the last six laps of the Grand Final. All in all, I felt like I learned a lot today, thanks to the collaboration with Igor and Coque.” 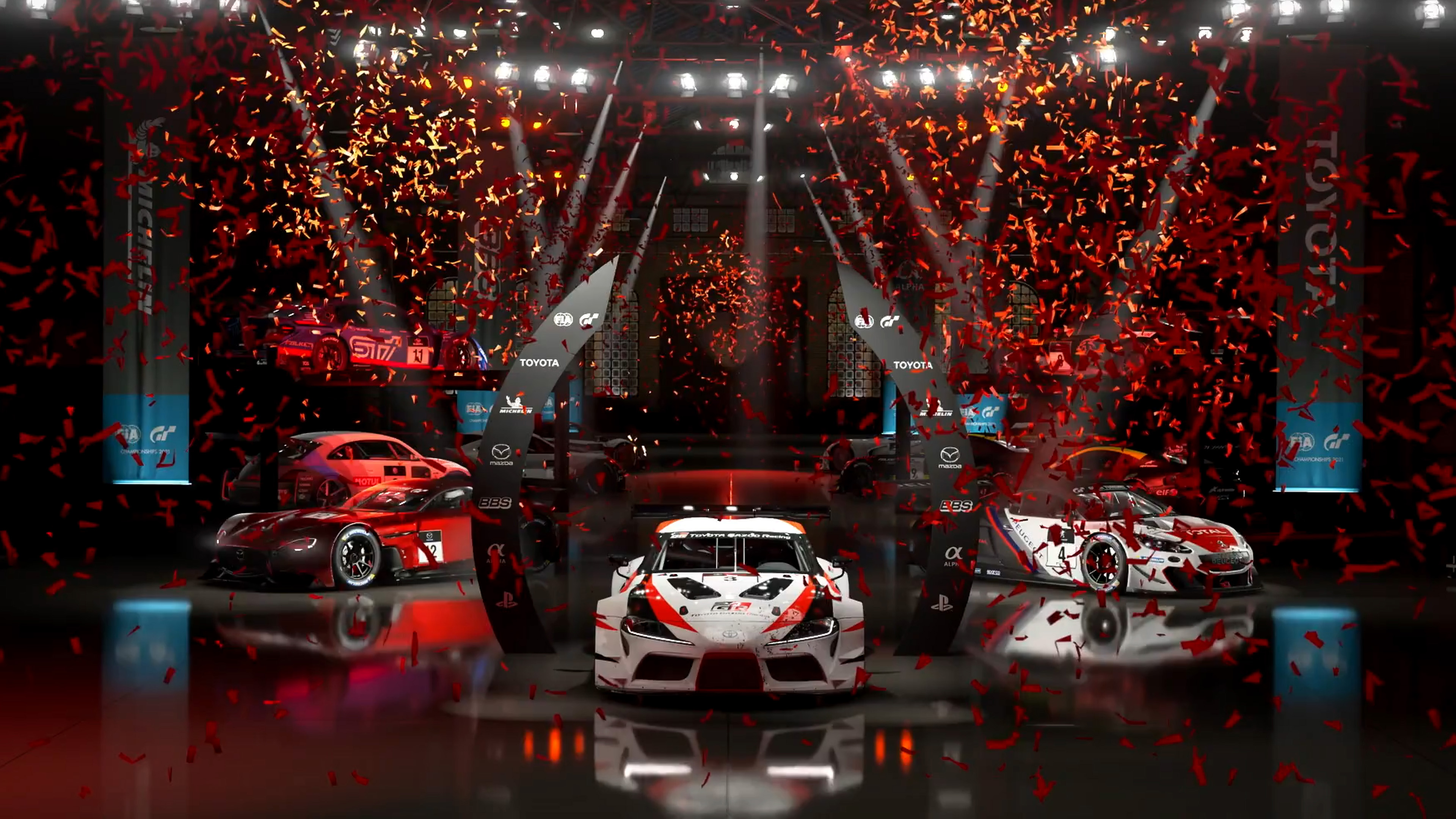