On Saturday August 11, the Gran Turismo Asian Championship 2012 was held at the Nissan Global Headquarters Gallery in Yokohama, Japan.

In this tournament, 15 top ranking drivers of GT Academy 2012 from Japan, Korea, Taiwan, Hong Kong, Singapore, Malaysia, Thailand, and Indonesia, as well as 16 winners of the Super GT Cup held in Malaysia competed against each other. From the heated but very clean races between the top ranking Asian racers, Kazuki Yamada of Japan emerged as the overall winner.

The tournament was streamed worldwide on Ustream, and the first European winner of the GT Academy; Lucas Ordoñez flew in from Spain to watch the races in person. And for the event finale, a mini-live concert performance was given by daiki kasho, who has provided many memorable music tracks for the Gran Turismo series over the years. The Nissan Global Headquarters Gallery was filled with the heat of Gran Turismo throughout the day.

Introduction of the 16 participants 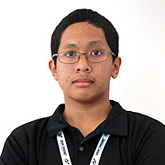 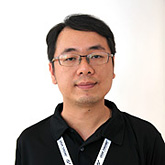 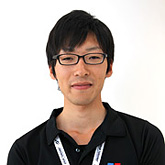 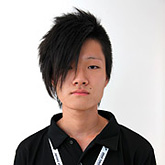 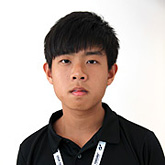 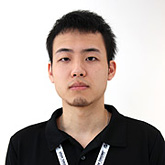 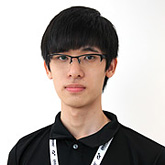 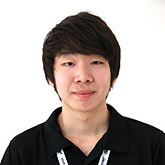 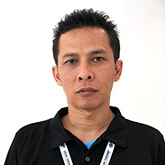 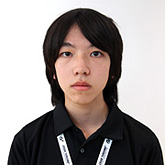 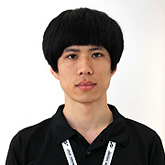 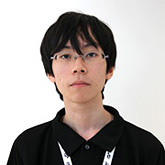 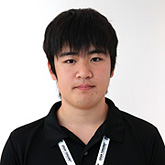 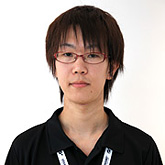 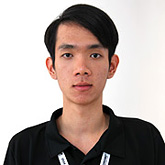 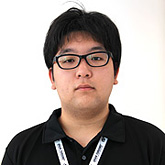 The 16 competitors on stage were separated into 8 person groups of A and B for the qualifying session.

The qualifying round was held in the free run mode of the lounge, where 8 players started from the pit area in 15 second intervals, to compete in a 3 lap time trial.

The course used was the Tokyo Route 246, driving the Nissan 370Z (GT Academy) ’08, with Comfort/Soft tires. The top 4 drivers from each of these groups will move on to the final race. 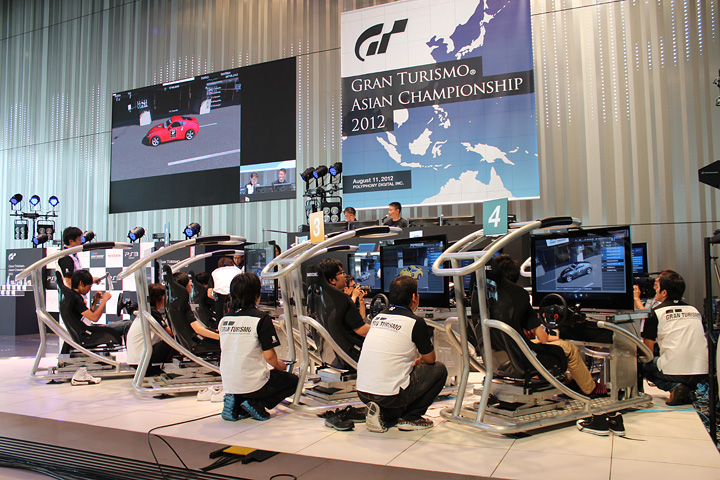 In Group A, Yamada marked 2 minutes 4.794 seconds even while feeling out the grip of the tires in the first lap.

Each driver shortened their best lap time on the second lap. Yamada set himself a precise driving line and marked 2 minutes 3.046 seconds, and on the third lap he made good use of the tires and securing the top time marking 2 minutes, 2.742 seconds. Sachai came in at a close second at 2 minutes 2.954 seconds. With very close results, the participants really showed the high skill level of the drivers present at these finals. 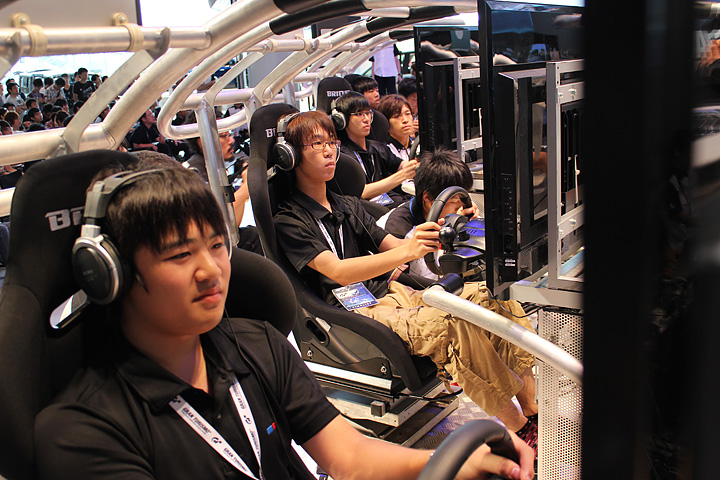 But from the second lap, the standings change greatly. Takahashi marks 2 minutes, 2.658 seconds, greatly exceeding the other drivers and placing him ahead of Yamanaka.

It looked as though Takahashi had secured himself first place in qualifying, but Rama had not given up. He had already marked 2 minutes 3.474 even though he had made a slight error in the last sector. He still had a chance to come out on top.

In the final lap, Takahashi crosses the finish line but was unable to outdo his last time. Then Rama gives it his best shot. Driving perfectly without error, he marks 2 minutes, 2.589 seconds, beating Takahashi’s time by 69 thousandths of a second. The crowd went wild as Rama came across the finish line. With a great turn of events at the end, the time trials had come to a close.