The final was a 3 round race on a point system

The final was a 3 round race on a point system. After the talk session between the first European GT Academy Champion, Lucas Ordoñez and Kazunori Yamauchi, the 8 finalists who passed the qualifying round moved forward into the final round.

The final was raced in 3 rounds, with point totals gained from the three races determining the winner. All 8 drivers on stage announced that they would drive a clean and fair race, and took their positions in their driver’s seats.

The first round was a 5 lap race on the High Speed Ring, in the Nissan Silvia Spec-R Aero (GT Academy) ’02 with Comfort/Soft tires. Because of the long straights, races here are dependant on how slip streams are utilized, and the positions can change even at the very end of the race.

The race was started in the grid order determined by qualifying lap times. Yamada shot forward from 3rd place into the lead, and attempted to open the gap with the other cars to prevent them from using his slipstream. 2nd place and below were bunched in a group, with Rama (Indonesia), Sachai(Thailand) Kawajiri(Japan), Yamanaka(Japan), and Takahashi(Japan) rapidly changing positions with each other around every turn.

In the third lap, Yamada in the lead marks the fastest lap at 1 minute, 21.120 seconds, and Kawajiri and Rama breaks away from the crowd in the fight for 2nd place. With almost identical sector times, they enter the final lap.

Rama following closely behind Kawajiri jumps into his inside on turn 2, overtaking him. Kawajiri follows close behind, waiting for a chance for revenge. But Rama holds his position with careful line control until the last lap. Coming out of the final corner, Kawajiri jumps out of Rama’s slipstream and goes to the outside. Slowly catching up, he out runs Rama just before the finish line.

The second round was an 8 lap race on the Deep Forest Raceway, in the Nissan 370 Tuned Car, with Sports/Hard tires. The starting order was a reverse order grid, with the leaders of the first race at the rear of the group.

Choi (Korea) held the lead for some time after the start, but in the latter half of the course Takahashi overtook him and took the lead. And the top 3 from the last race slowly made their way through the crowd.

In the first corner in the third lap, Yoshida (Japan) takes the inside of Takahashi (Japan) and overtakes him. But following close behind are Rama (Indonesia) and Kawajiri (Japan), and a fierce battle for second place ensues. After some time Yamada who started last, also joins the fray.

Lap 6, Rama tailslides just slightly, and Yamada takes the opportunity to shoot past him. Takahashi following close behind follows him past Rama, into 3rd place. At this point, Yoshida with a 1 second lead is in first place, with Kawajiri in 2nd, and Yamada in 3rd.

In the final lap, Yoshida who had made no mistakes until now looked as though he would keep his lead until the end. However he goes into a half-spin halfway through the track. Kawajiri and Yamada immediately pass him, and enters a close battle for first place. Yamada follows Kawajiri close behind, but is not able to overtake, and enters the final corner.

But Yamada makes his move here. Picking up speed in a line that would give him maximum speed upon exit, he lines up next to Kawajiri on the home straight before the finish line. They come across the line almost simultaneously, so close that the commentators could not tell who won. With just a 12 thousandths of a second lead, Kawajiri kept his position and won the race.
*Points in parenthesis show the total points gained

The final race was a 10 lap race on the Grand Valley Speedway, in the Nissan GT-R R35 TC. Cars were equipped with Racing/Hard tires and again, the grid order was reversed. Yamada and Kawajiri have gained 17 points in the 2 races up until now, but depending on the outcome of this race, there is still a chance for Rama of Indonesia and Sachai of Thailand to win.

Immediately after the start, Rama and Sachai pull ahead along with Choi of Korea. With 2nd place and behind stuck in a group, Rama raises his pace and attempts to gain a good lead past them.

In the first corner of lap 2, Takahashi who had been neck and neck with Yamanaka rises to 3rd place. Kawajiri who started in last place skillfully weaves past the other cars, and jumps up to 4th. Yamada who has risen to 5th closes in on Kawajiri, and passes him on the S curve just before the final corner.

With incredible concentration Yamada overtakes Takahashi in 3rd, and marking his fasted lap, shoots past Sachai into 2nd place. With 5 laps remaining, the gap to Rama is still 4.7 seconds. Rama notices Yamada coming after him, and raises his pace marking his best laptime as well, but the gap closes in gradually.

In the 8th lap, Yamada has Rama in his sights. Never giving up, never holding back, Yamada passes Rama on the exit out of a hairpin, and crosses the finish line amidst a roaring crowd. The audience gave a loud and sincere applause for the incredible drama they witnessed, only made possible because these men are truly the best of the best.
*Points in parenthesis show the total points gained 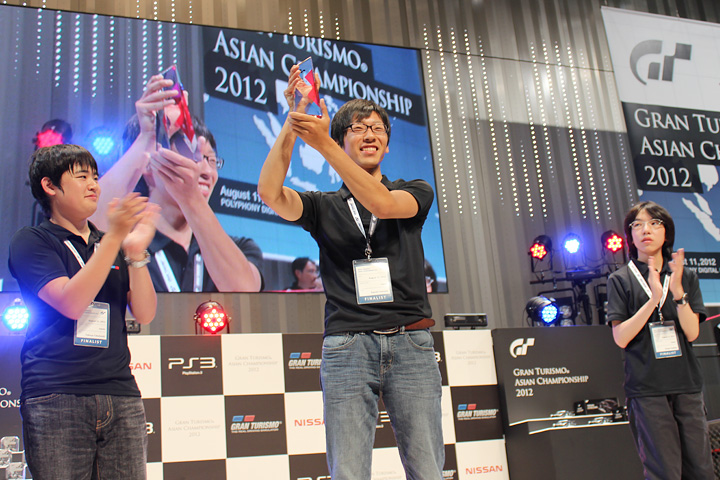 Through round 3 of the final, Yamada of Japan gained 27 points total, making him the winner of the Gran Turismo Asia Championship 2012. The content that was streamed on Ustream during the event has been recorded for your viewing. Please follow the link below to catch the action from the finals.