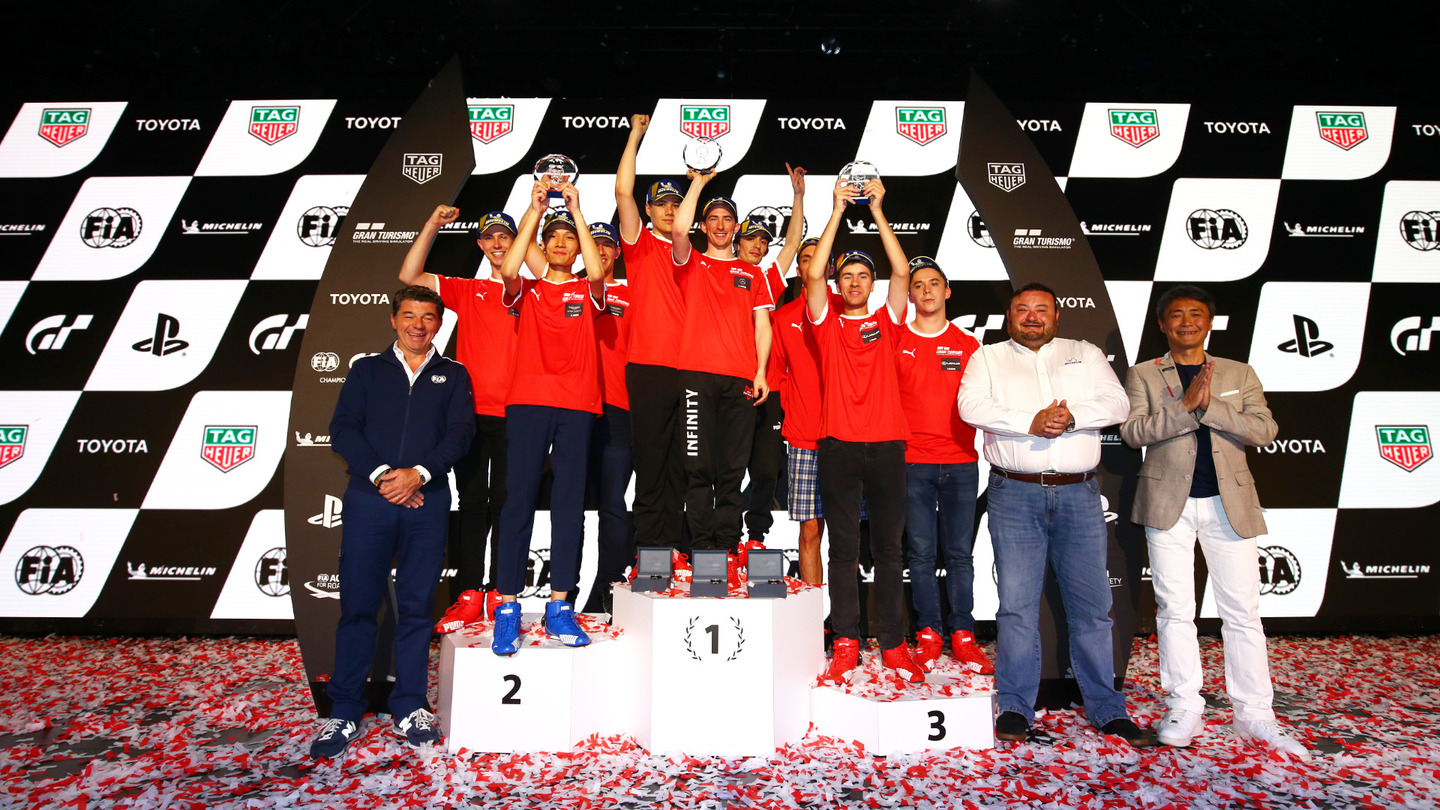 New York, USA (August 24, 2019) – There was plenty of action in the Manufacturer Series races during Day 1 of the 'World Tour 2019 – New York,' the third leg of the five-race series where 46 of the best Gran Turismo racers from 19 countries gathered to battle for a place at the World Finals, which will occur in Monaco in November. Held at the PlayStation Theater in the glitzy setting of New York’s Times Square, the event officially kicked off on Friday, 23 August, with a ground-breaking partnership announcement between Gran Turismo and Michelin and a Pro-Am race that featured race legend Juan Pablo Montoya.

On Saturday, the action began with Qualifying where the 12 competing teams in the Manufacturer Series battled one another for positions on the starting grid. The top six finishers then competed in an additional race that determined the starting order for the first race. After the dust had cleared, it was Mikail Hizal (Germany) in the Gr.4 (modified production cars) Subaru WRX sitting on pole position, with Coque López (Spain) in the Toyota 86 and Cody Nicola Latkovsky (Australia) in the Mercedes-Benz SLS AMG rounding out the top three. 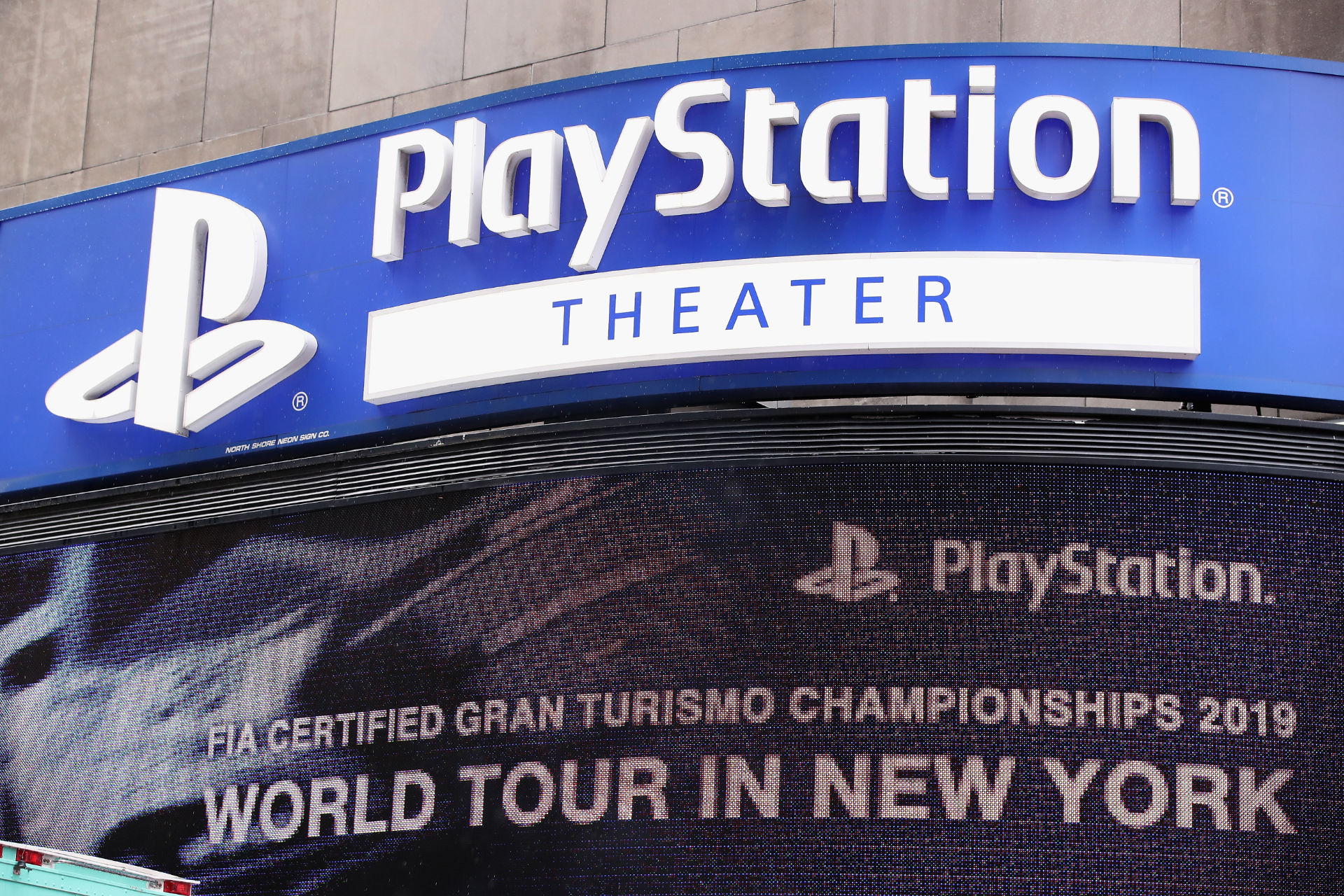 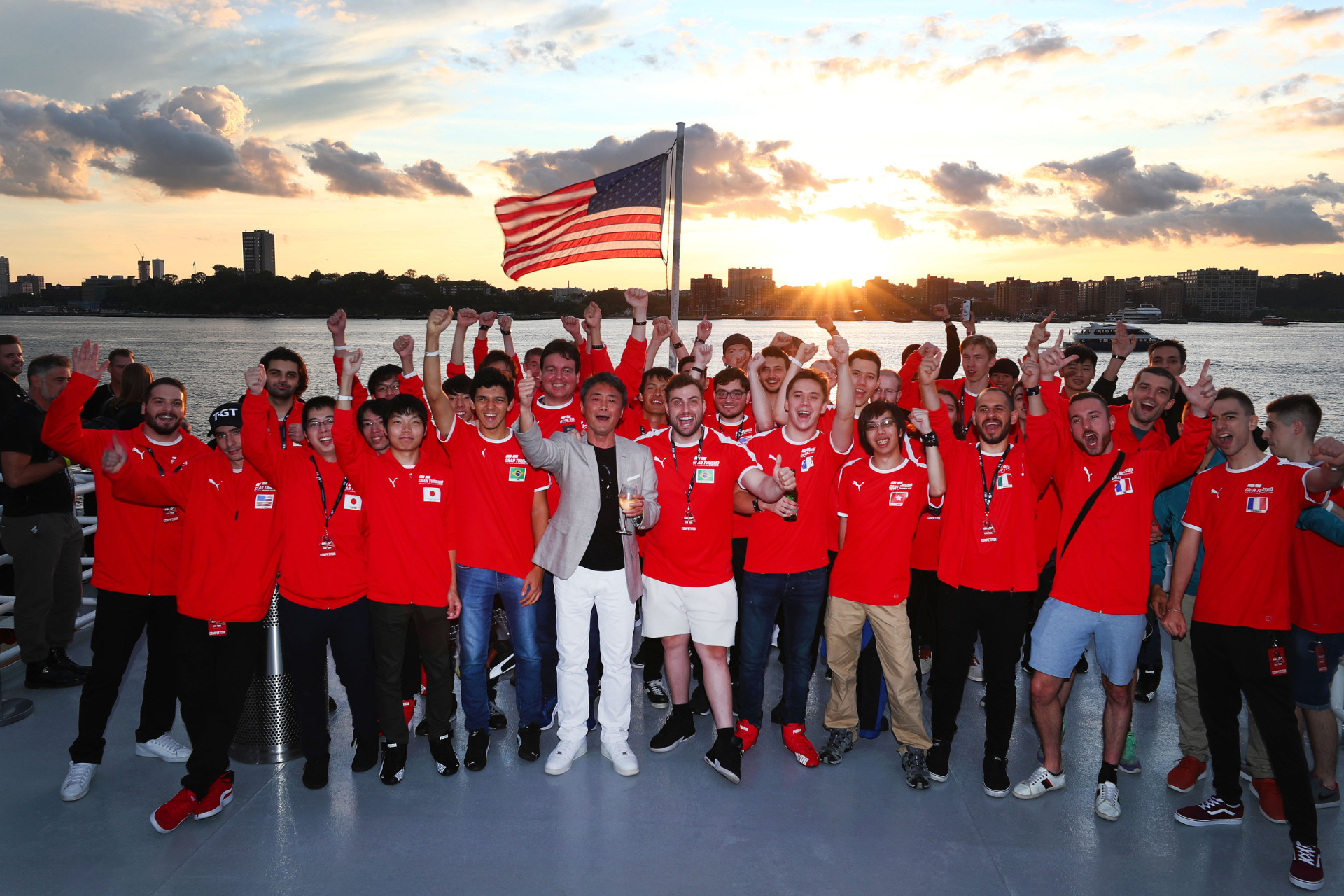 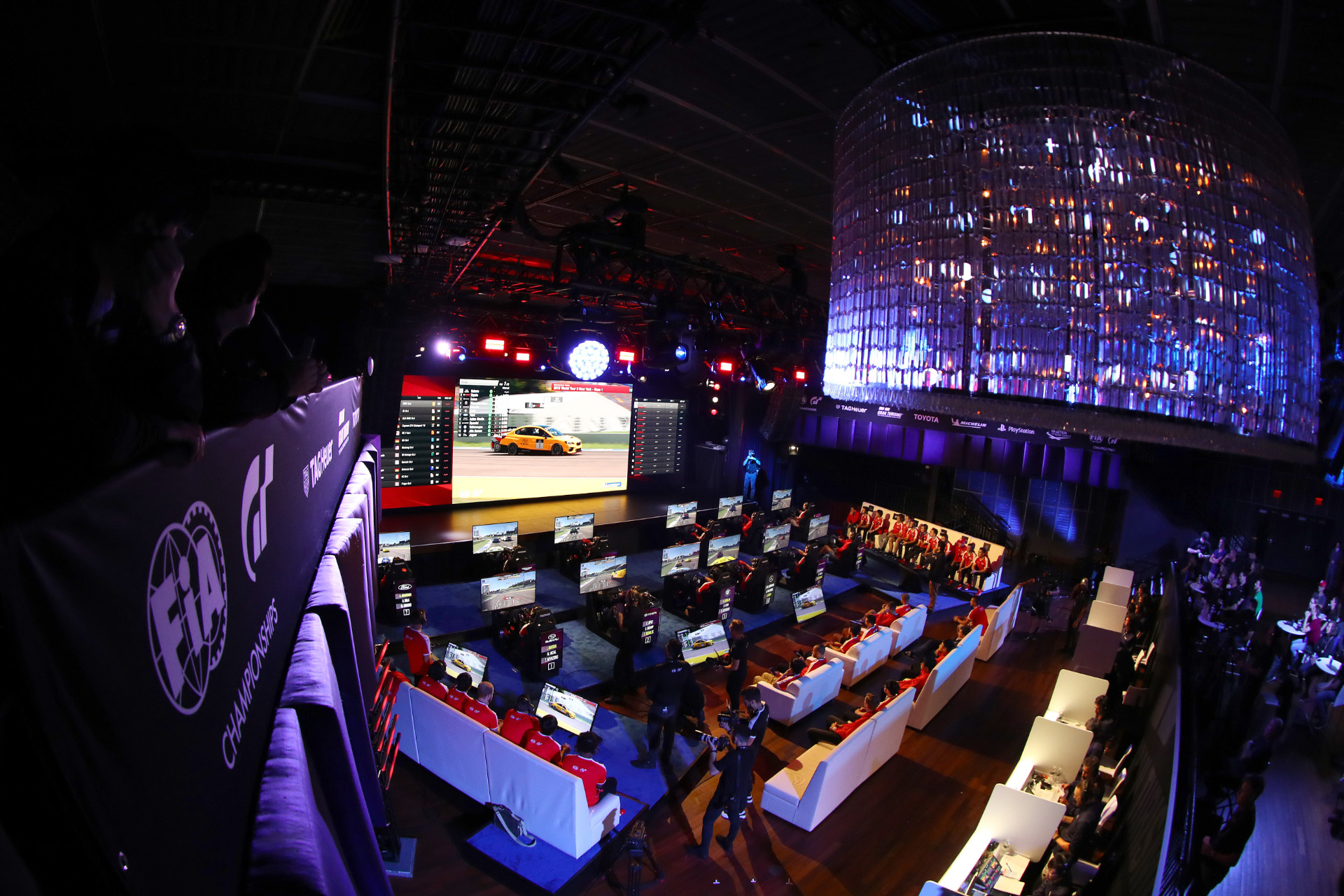 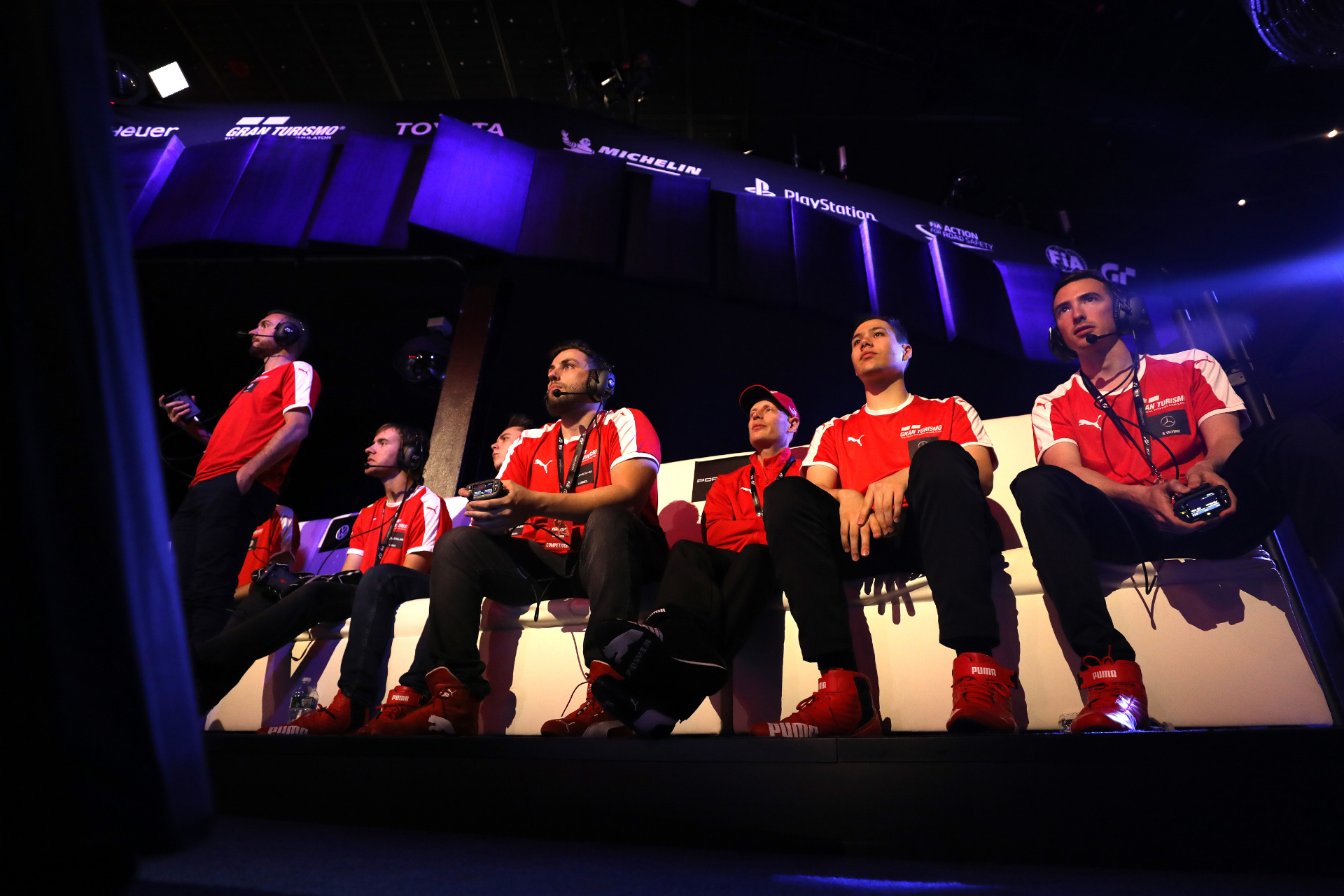 The first race of the day, held on the 'Blue Moon Bay Speedway - Infield A' track, was an eight-lap sprint, where only one of the team’s three competitors was required to drive. After the running start, all the cars got through the first corner without incident, with Joseph De Jesus (Australia) holding off a daring outside passing attempt from the Toyota 86 of Facundo Dudulec (Argentina). Anthony Felix (USA) in the Mercedes-Benz made a huge driver error going way too wide going into a corner, dropping from 3rd position to 6th. On lap two, after the tricky hairpin, Toyota made a strong move to pass the Subaru to take the lead, followed by a charge by the Porsche Cayman GT4 Clubsport, BMW M4, Mercedes-Benz SLS AMG and Volkswagen Scirocco that dropped De Jesus in the Subaru to 6th place in the blink of an eye.

While Facundo Dudulec (Argentina) of Team Toyota and Matt Simmons (Australia) in the Porsche maintained the first two positions for the next few laps, Nicolás Rubilar in the BMW was doing all he could do to hold off Felix in the Mercedes-Benz for 3rd place. On Lap 6, Mercedes-Benz was hit with a penalty for cutting off another car, ultimately allowing the Volkswagen, driven by Kosuke Nishimura (Japan), to get by, dropping the SLS AMG to 5th place. Meanwhile the pole sitter, De Jesus in the Subaru struggled to develop a good rhythm and dropped to a disappointing 8th.

Ultimately, it was Dudulec in the Toyota 86 crossing the finish line first, earning the Japanese manufacturer 12 points, with Simmons in the Porsche finishing half a second behind, gaining 10 points, followed by BMW’s Rubilar who received 8 points.

By winning Race 1, Toyota was awarded pole position for the second race of the day, which was a seven-lap sprint in the same Gr.4 machines, but this time, the race was held on the tricky 'Autodromo Lago Maggiore - West' circuit. At the end of the back straight, Simon Bishop (New Zealand), piloting the Toyota 86, made a serious driving error, taking the wrong line and allowing a caravan of cars to dive to the inside and get through. When Bishop recomposed himself, the Toyota found itself in 6th place, all but out of contention for this short race. The running order changed drastically before even the first lap was in the books, with Soma Iseri (Japan) in his BMW M4, Costa Rica’s Bernal Valverde’s Mercedes-Benz SLS AMG and Baptiste Beauvois (France) in the Lexus, now occupying the top three spots. Takuma Miyazono (Japan) in the Subaru, who started the race in 10th place, worked his way up to 5th.

On Lap 2, Valverde in the Mercedes-Benz took a big gamble, taking an outside line through Turn 8 and passing Iseri in the BMW to take the lead, but then Iseri got the lead back in the following lap as he, Valverde and Beauvois in the Lexus RC F traded paint through a number of corners. Then suddenly, Masahiro Kochibe (Japan) in the Aston Martin, who started in 8th position, found himself dueling with the leaders, eventually passing the Lexus and pressuring the Mercedes-Benz for 2nd place. Bishop in the Toyota also put itself back in contention, passing the Lexus to grab 4th place.

On Lap 5, Kochibe in the Aston Martin took the overall lead, getting by the BMW on the inside through the hairpin corner, followed by the Mercedes-Benz, which also passed the Bimmer. At the end, it was Kochibe driving his Aston Martin to victory, after starting in 8th place, while Valverde brought his Mercedes-Benz home in 2nd and Iseri taking 3rd in his BMW M4.

The third race of the day was held at 'Fuji International Speedway', where the drivers competed for six laps in Gr.3 machines (purpose-built race cars). Adam Suswillo (UK) in the Aston Martin Vantage started the race on pole position for winning Race 2, followed by Cody Nicola Latkovsky’s (Australia) Mercedes-Benz SLS AMG and Randall Haywood (USA) in the BMW M4. After a near pile up on the first corner, the Aston Martin and Mercedes-Benz separated themselves from the pack, and then proceeded to engage in a fabulous duel for the next three laps, where Latkovsky attempted to get by several times, touching the Aston on a few occasions, only to be blocked on every passing attempt. Meanwhile, the Ford GT driven by Marco Grasso (Italy) got by Haywood’s BMW M4, taking control of 3rd place.

On Lap 6, the final lap, Latkovsky passed Suswillo’s Aston Martin Vantage with a wonderful move through the first corner, taking the overall lead. The pass evidently rattled Suswillo as he was promptly passed by Andrew Brooks (Canada) in the Lexus RC F, while Mikail Hizal (Germany) in the Subaru worked his way to 4th place after starting in 9th position.

The race ended with Mercedes-Benz’s Latkovsky taking the checkered flag and allowing the German manufacturer to have a firm on hold on the day’s championship. Coming in 2nd place was Lexus, which made a daring pass on the final lap on the Aston Martin. Of note was Mikail Hizal’s performance, who brought his Subaru WRX home in 4th place after starting in 9th position.

The last and final race of the day was a 25-lap endurance contest around the challenging 'Autódromo De Interlagos' circuit in race-ready Gr.3 machines. By winning the previous race, the Mercedes-Benz SLS AMG was awarded pole position, followed by the Lexus RC F and Aston Martin Vantage. Everything was on the line here, as the points awarded for this contest was worth double the previous races, with the winner taking away 24 points, the 2nd-place finisher gaining 20 points and 3rd place getting 16, and so on. With a commanding lead going into this final race, all Mercedes-Benz needed was a 2nd-place finish to take the overall championship.

With the rules requiring all three contestants to drive, as well as being restricted to an allotted amount of fuel and using all three types of tires (hard, medium and soft compound), having a good strategy was key to winning this race. In the end, it came down to a battle of attrition between Mercedes-Benz and Aston Martin.

Tire strategy played a major role as most of the leaders, including Team Mercedes-Benz, opted to start with soft-compound tires, while Team Aston Martin decided to go with medium-compound rubber, saving the softer more performance-oriented tires for the last stint. While many of the teams made their first pit stops for their first driver/tire change during Lap 4 and 5, Team Mercedes-Benz and Team BMW, running 1-2, decided to stay out, squeezing the most out of their rubber, as Subaru brought up the rear.

The race leader, Team Mercedes-Benz, made its first pit on Lap 9, but was able to keep the lead when it came back onto the track. Meanwhile, a great battle was taking place for 4th place, with Toyota and Hyundai swapping positions a few times in a span of a couple of corners, with Lexus right behind them. By Lap 12, the Toyota Supra, on medium-compound tires, was able to overtake the Hyundai Genesis on soft-compound.

Team Mercedes-Benz made its second and final pit stop on Lap 17, changing drivers, taking on fuel and swapping to medium-compound tires, while the Aston Martin came in right afterwards, switching to soft-compound tires. With stickier rubber and its fastest driver behind the wheel, Adam Suswillo, Aston Martin was all set to chase down the German team and win the race, but Mercedes-Benz had other ideas as it also had its ace driver, Cody Nikola Latkovsky, for its final stint. All the while Mikail Hizal in the Subaru WRX was dramatically working his way up the field going from second-to-last place all the way to 4th by Lap 21.

But the drama of the race was happening at the front, where Mercedes-Benz and Aston Martin battled ferociously for the lead, going side-by-side on several occasions and trading paint with others. Just when Suswillo in the Aston Martin Vantage finally made it around the Mercedes-Benz SLS AMG on the penultimate lap, everyone in the sold-out auditorium presumed that Aston would win the race, but Latkovsky grabbed the lead back from Suswillo on the final lap, ultimately taking the chequered flag and the day’s championship. After a brilliant stint, Hizal made his way up the field, bringing his Subaru into 3rd – a drive that earned him the accolade of being voted the first 'Michelin Driver of the Day'.

“I feel amazing with this win. To have such a strong lineup of drivers to help me win this championship today for Mercedes-Benz makes me speechless. This was a long time coming, as we’ve been throwing everything at every single previous race, but we just didn’t have luck on our side. This time, we had the right strategy and didn’t get held up too much. We had a lot of motivation within our team, and luckily, every single lap went as planned.” 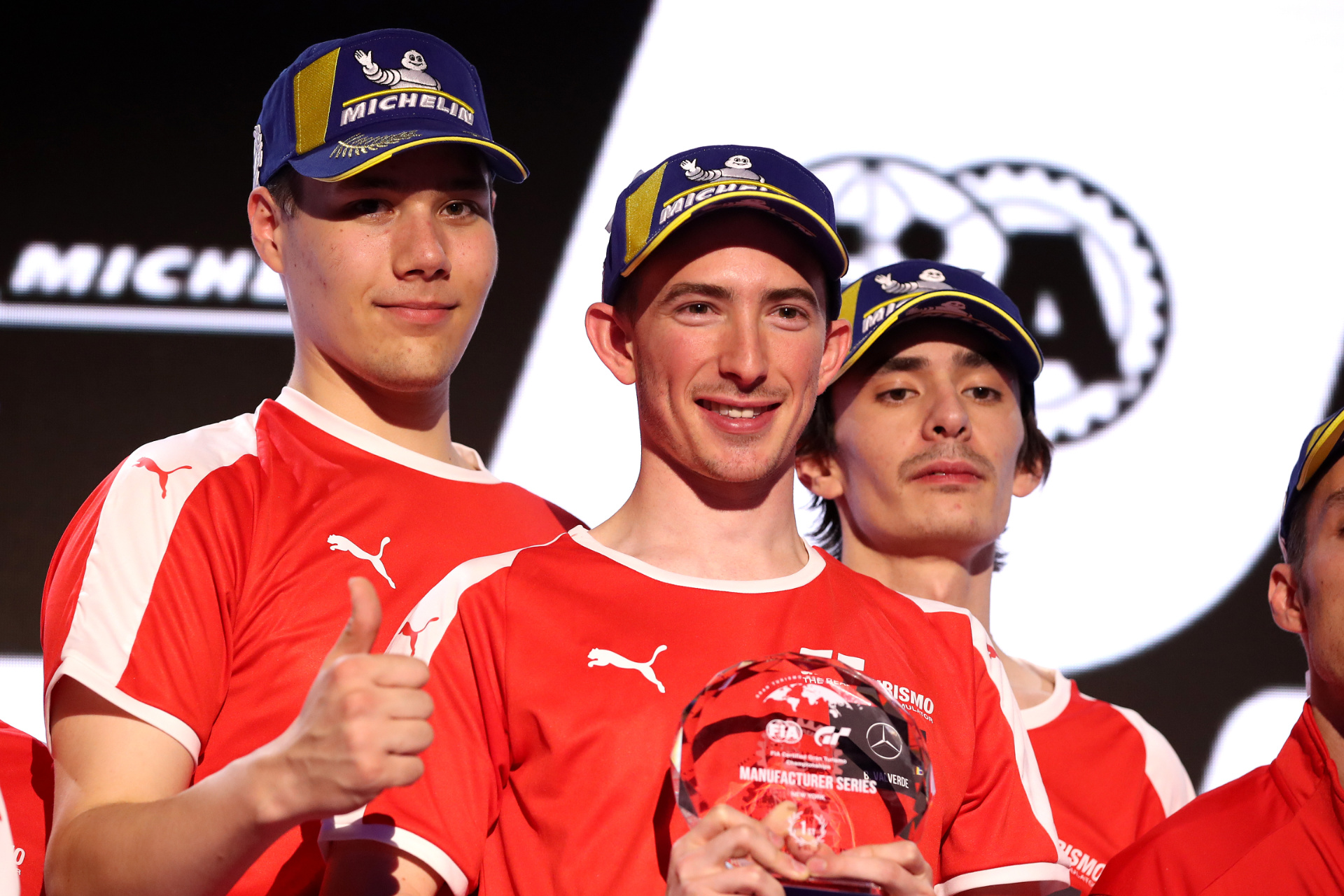 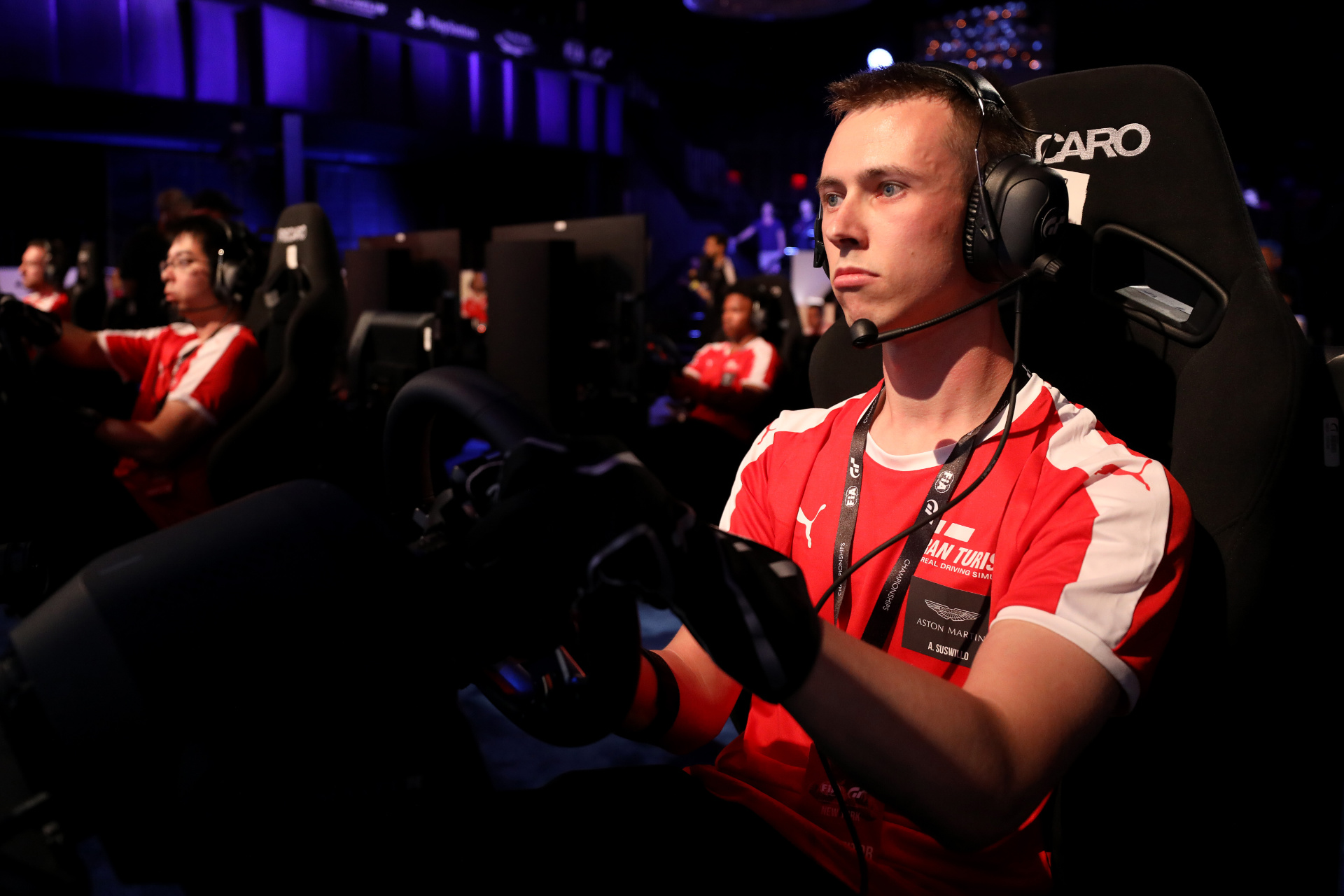 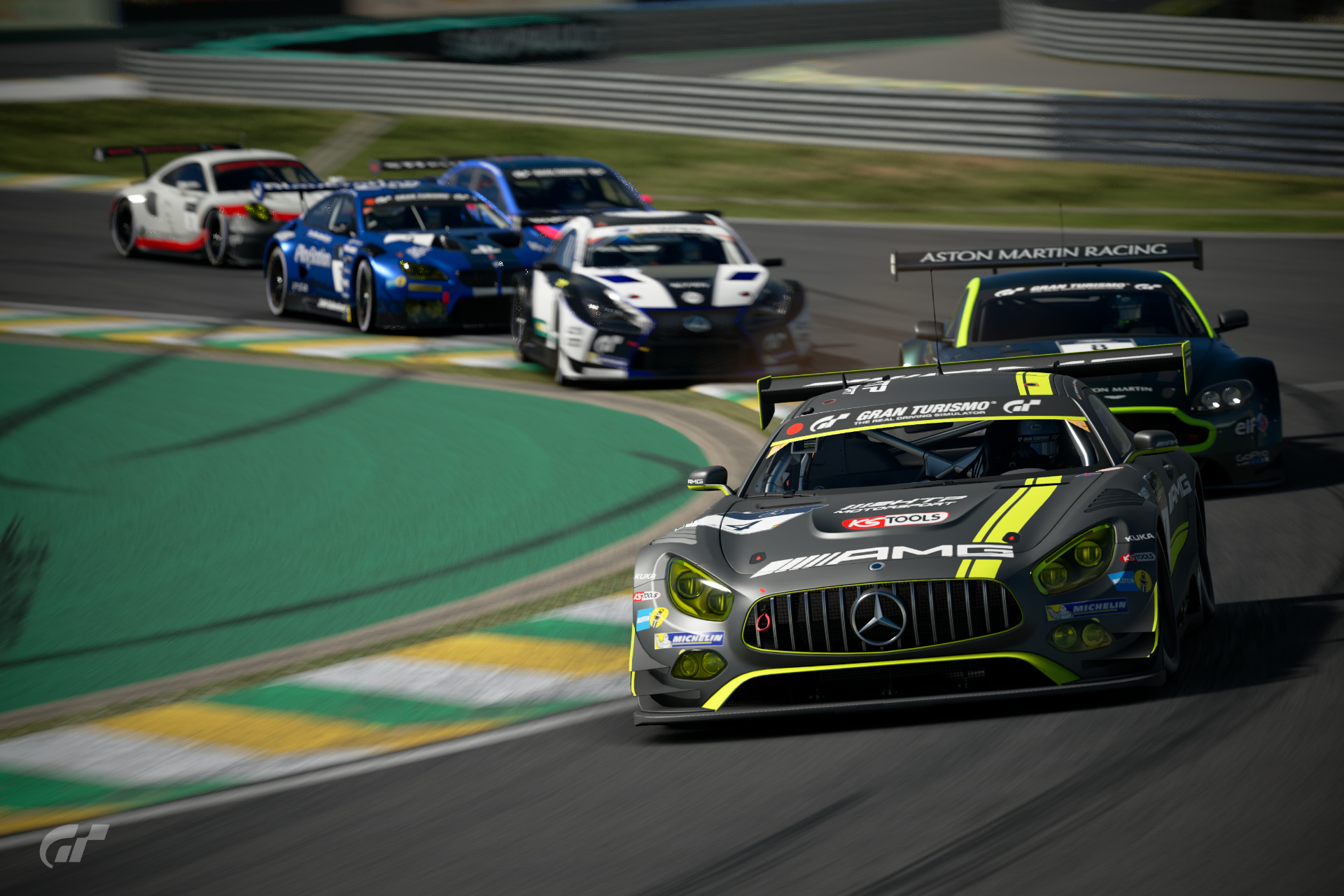 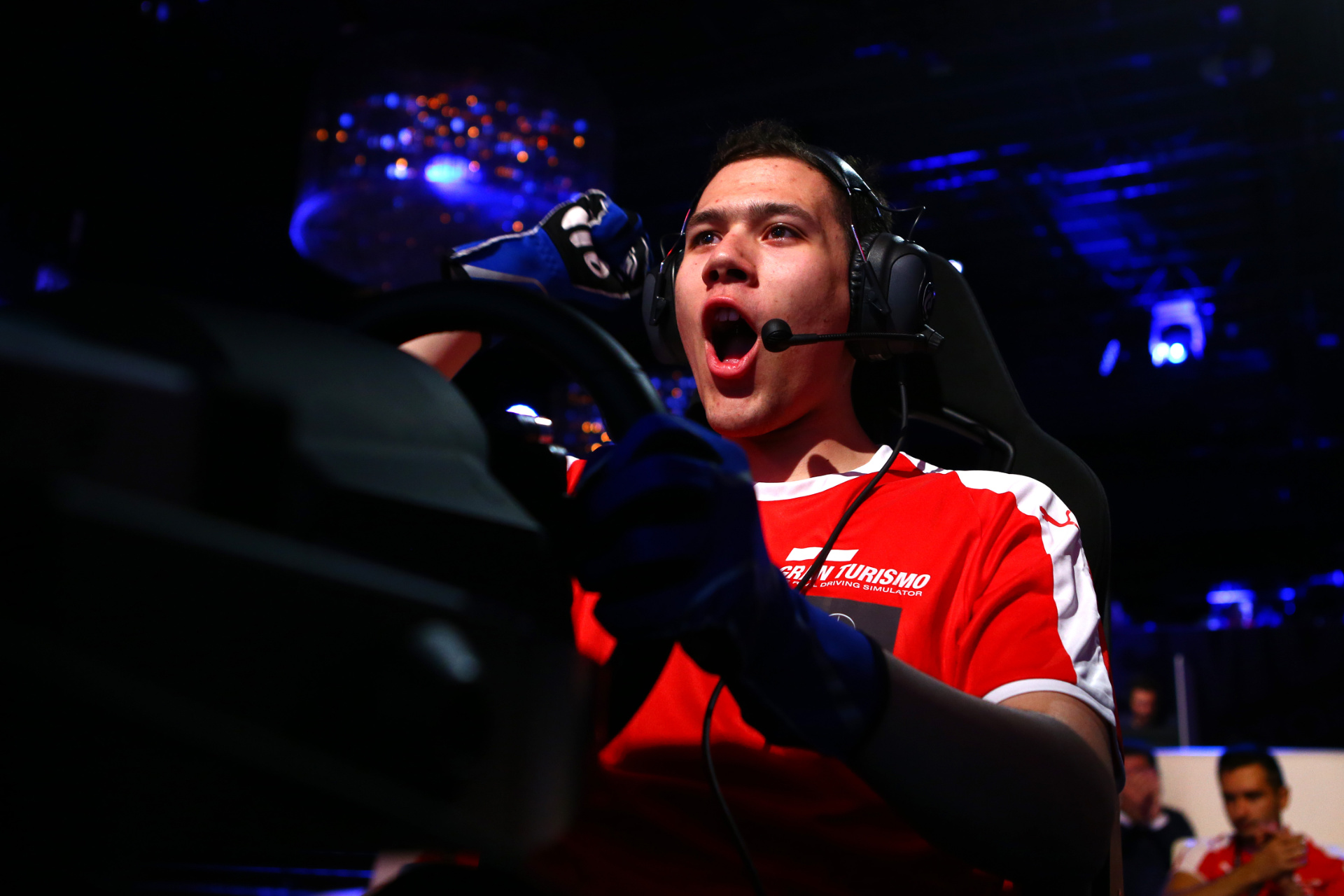 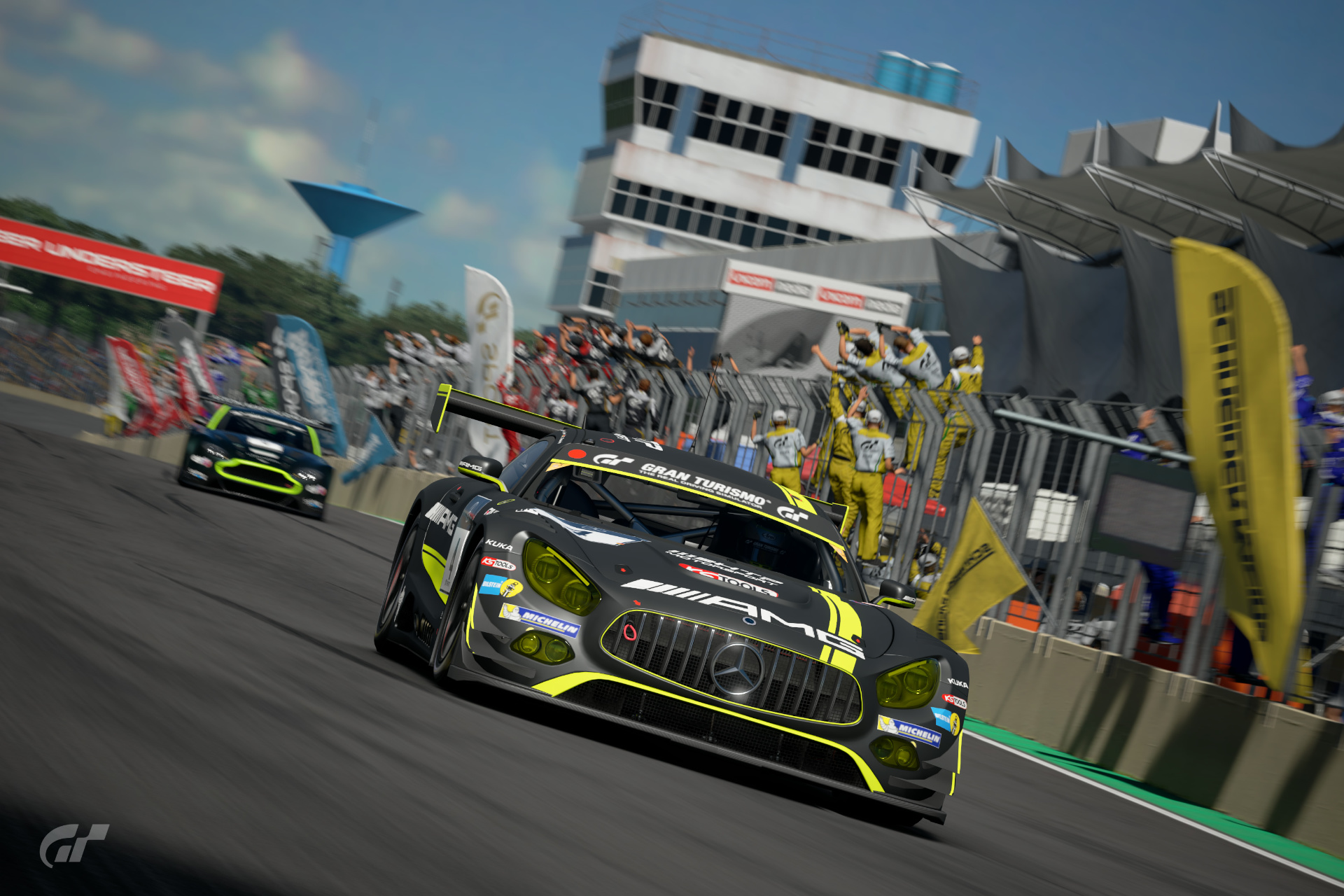 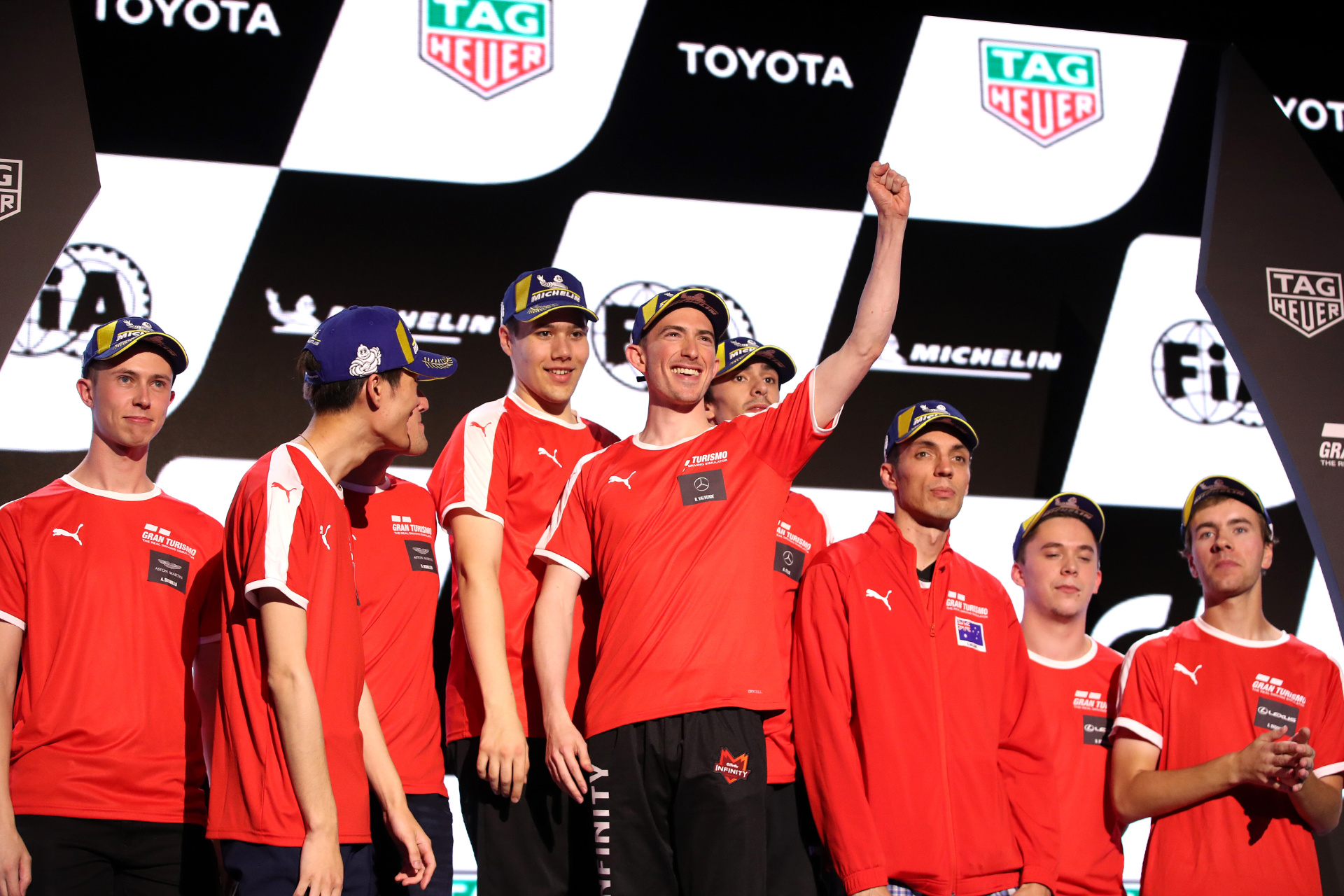 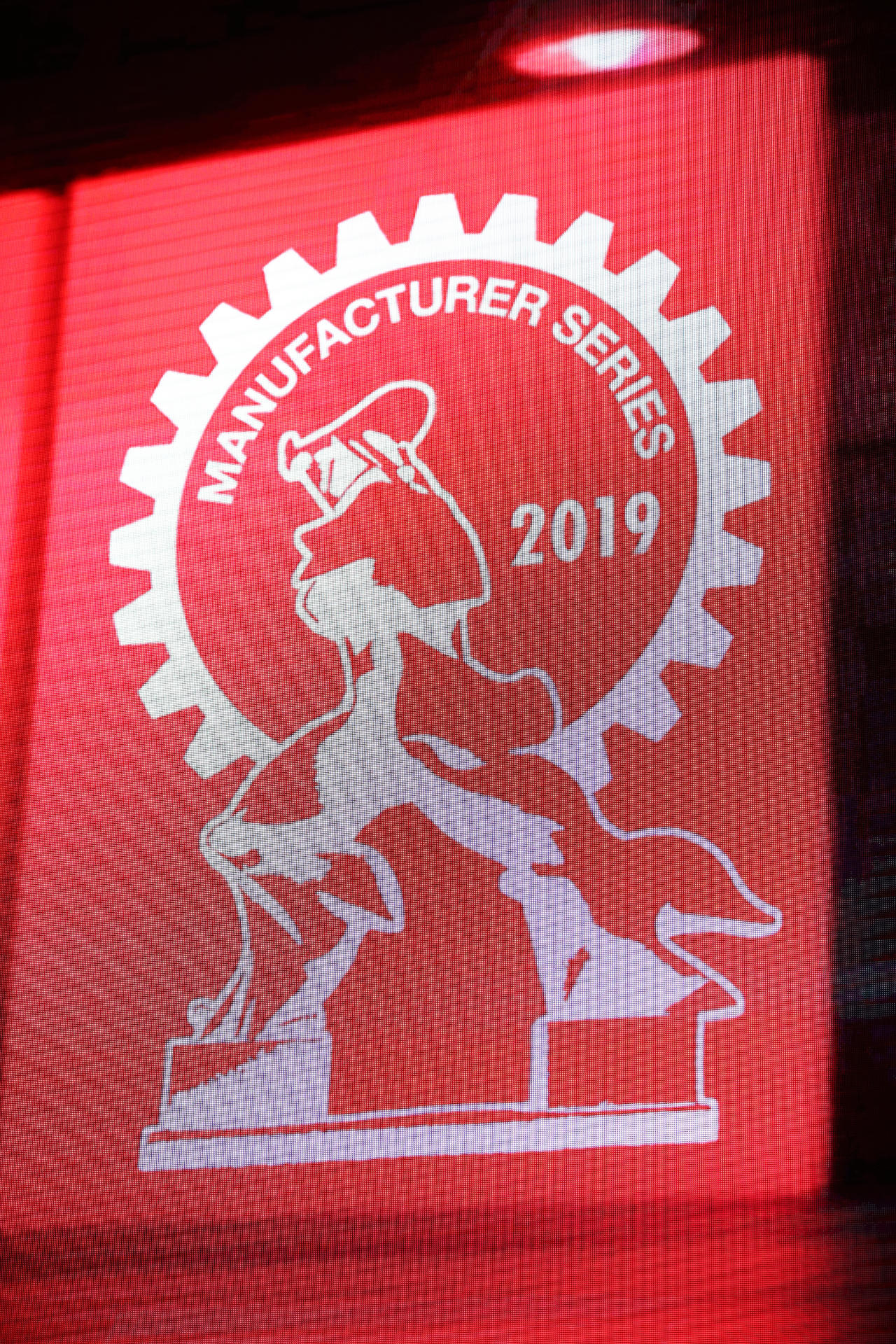 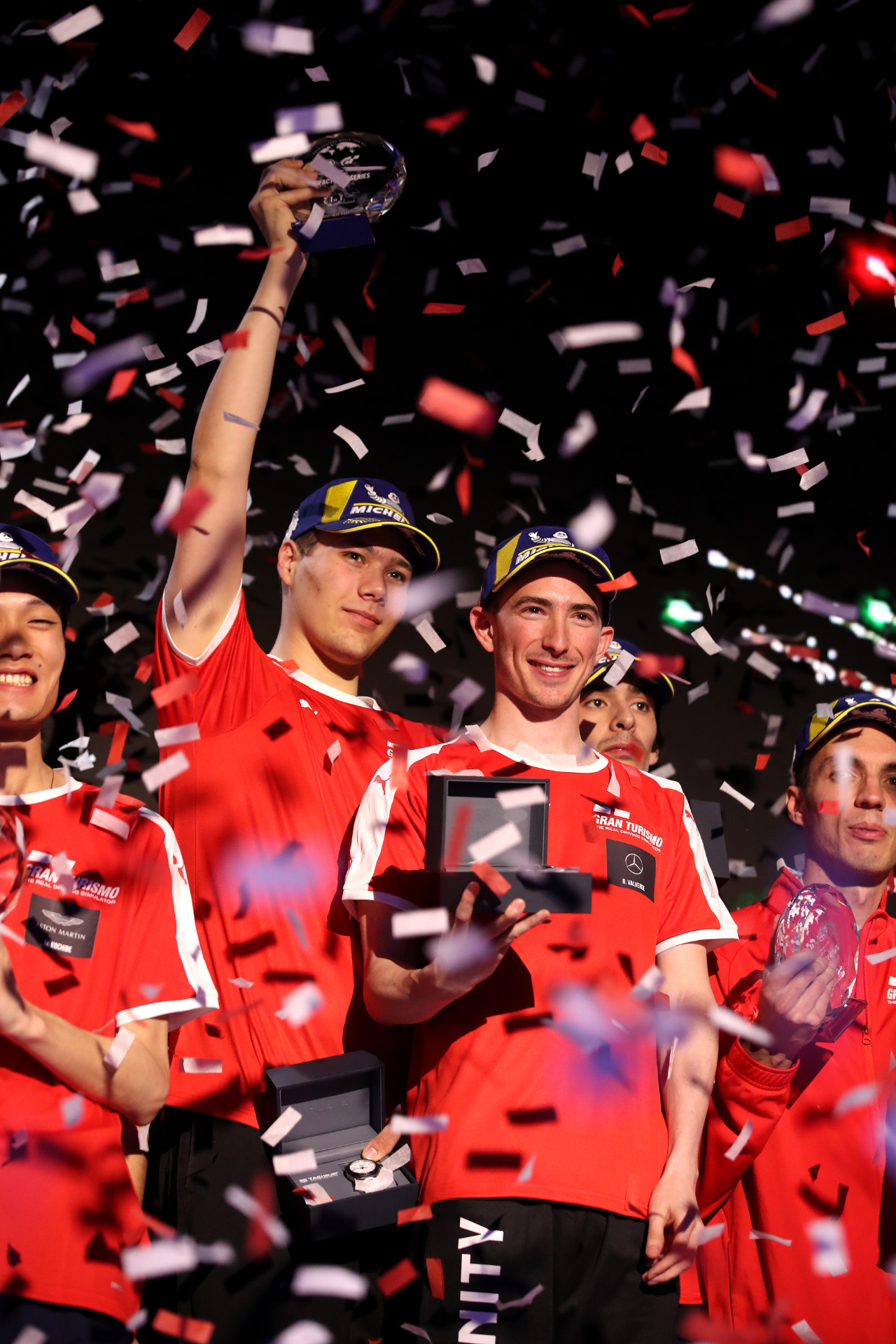