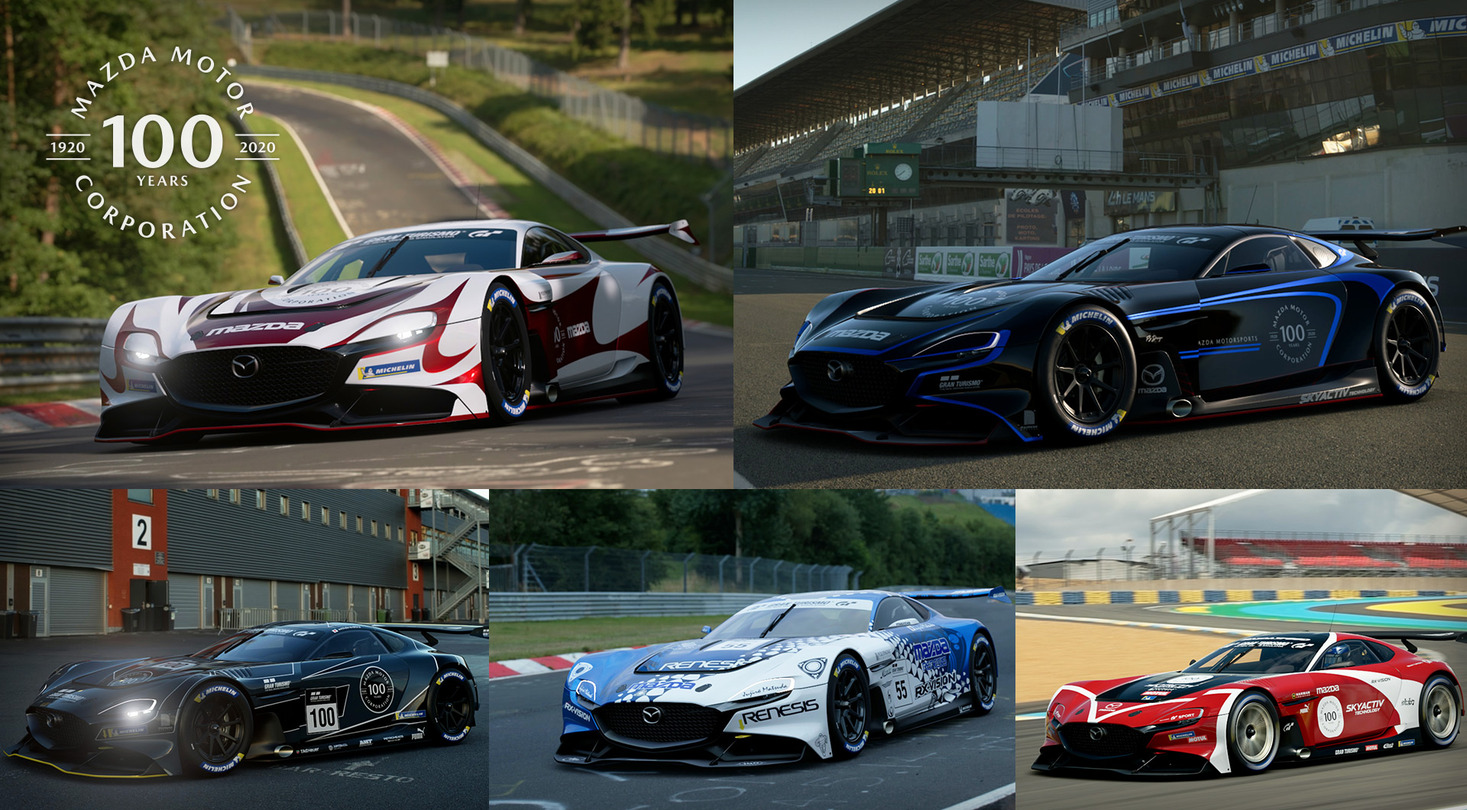 The 'MAZDA 100th Anniversary RX-VISION GT3 CONCEPT Livery Design Contest' was held for four weeks from 22 May to 19 June. A total of 555 entries were submitted from all over the world. In addition to the liveries, we have received many comments that celebrate Mazda's 100th anniversary. We would like to thank everyone who participated in this contest and all who enjoyed it.

Mr. Ikuo Maeda, Managing Executive Officer of Design and Brand Style, was in charge of the selection process for this contest. Kazunori Yamauchi, Gran Turismo Series Producer, has also joined the screening. From all the submissions that have met the Livery Contest rules, 20 advanced to the final selection. As a result of a strict examination, a total of 5 awards were assigned, including two 'Grand Prix' and three 'Honourable Mention' awards.

We will present the winning entries along with comments from Mr. Maeda and Mr. Yamauchi. In addition, we'll share also the comments from the winners, together with their works. 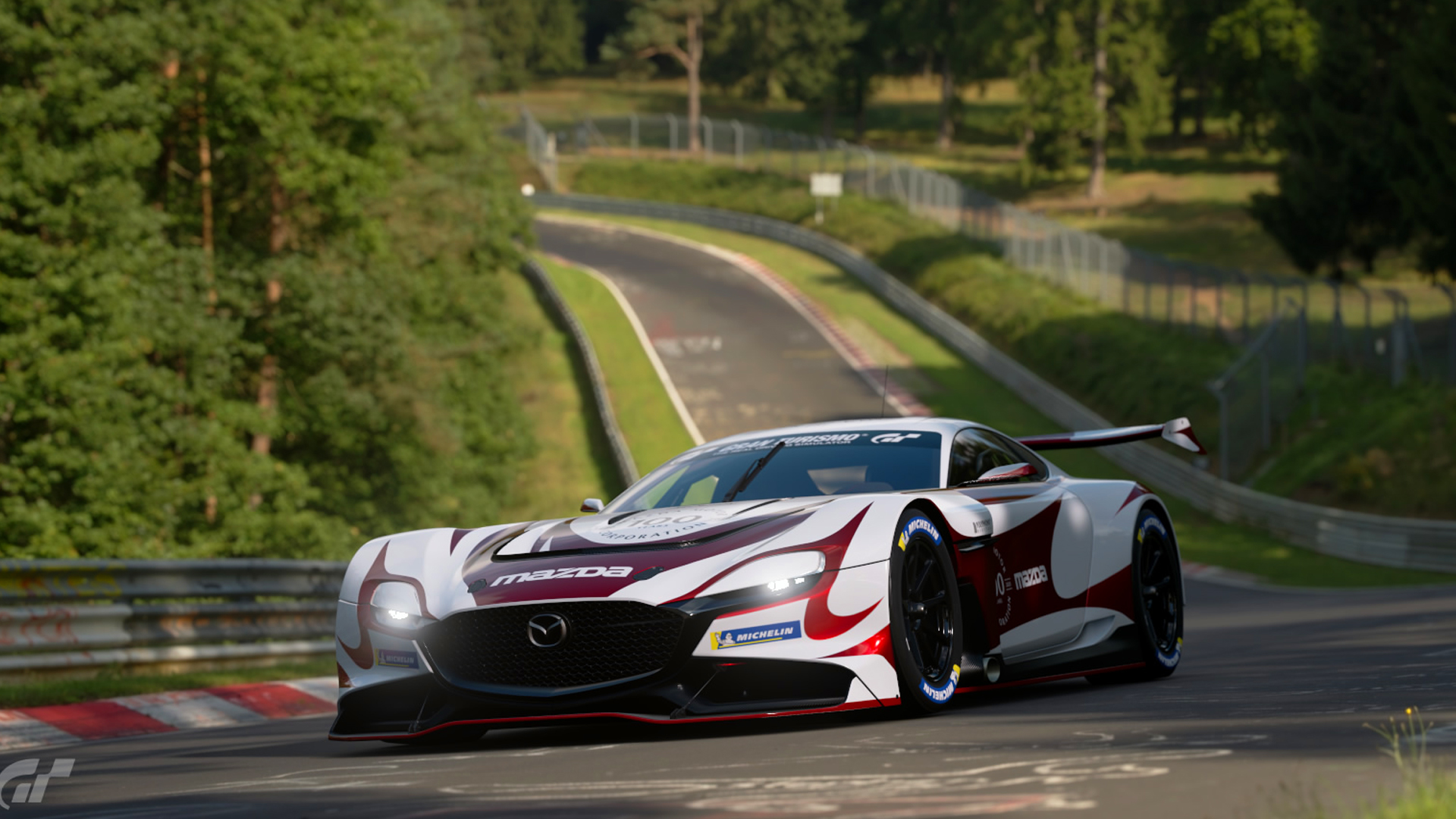 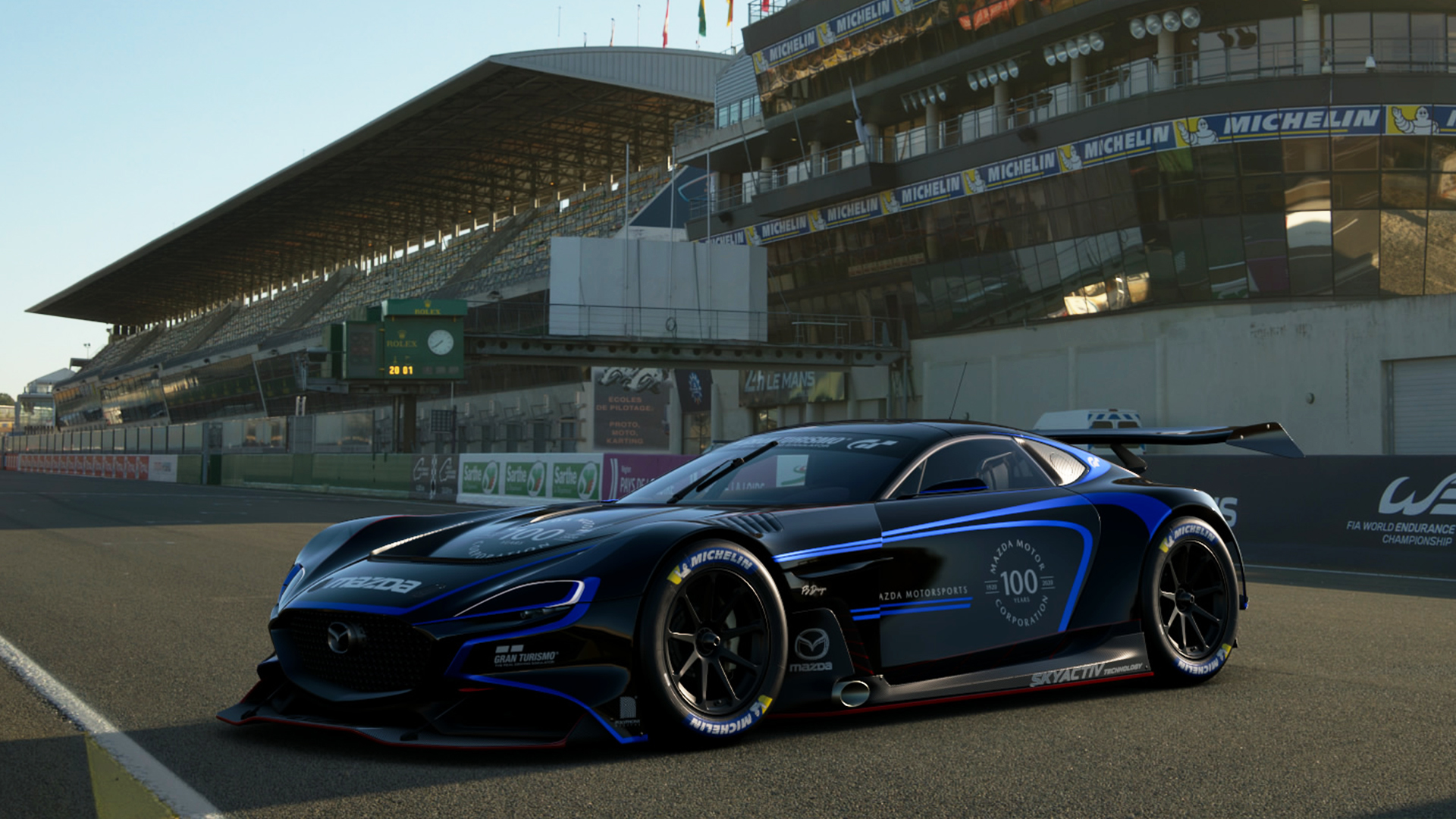 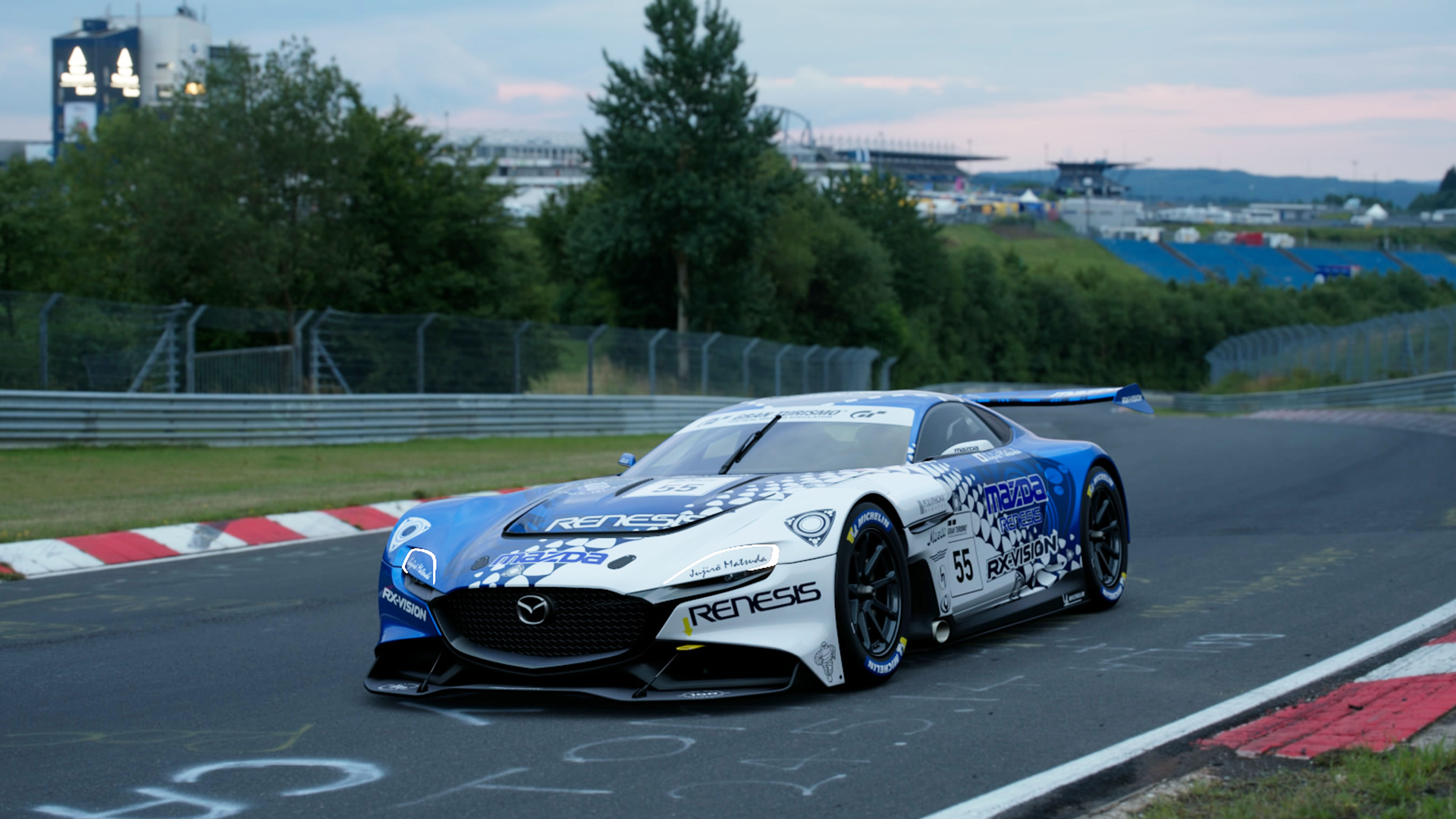 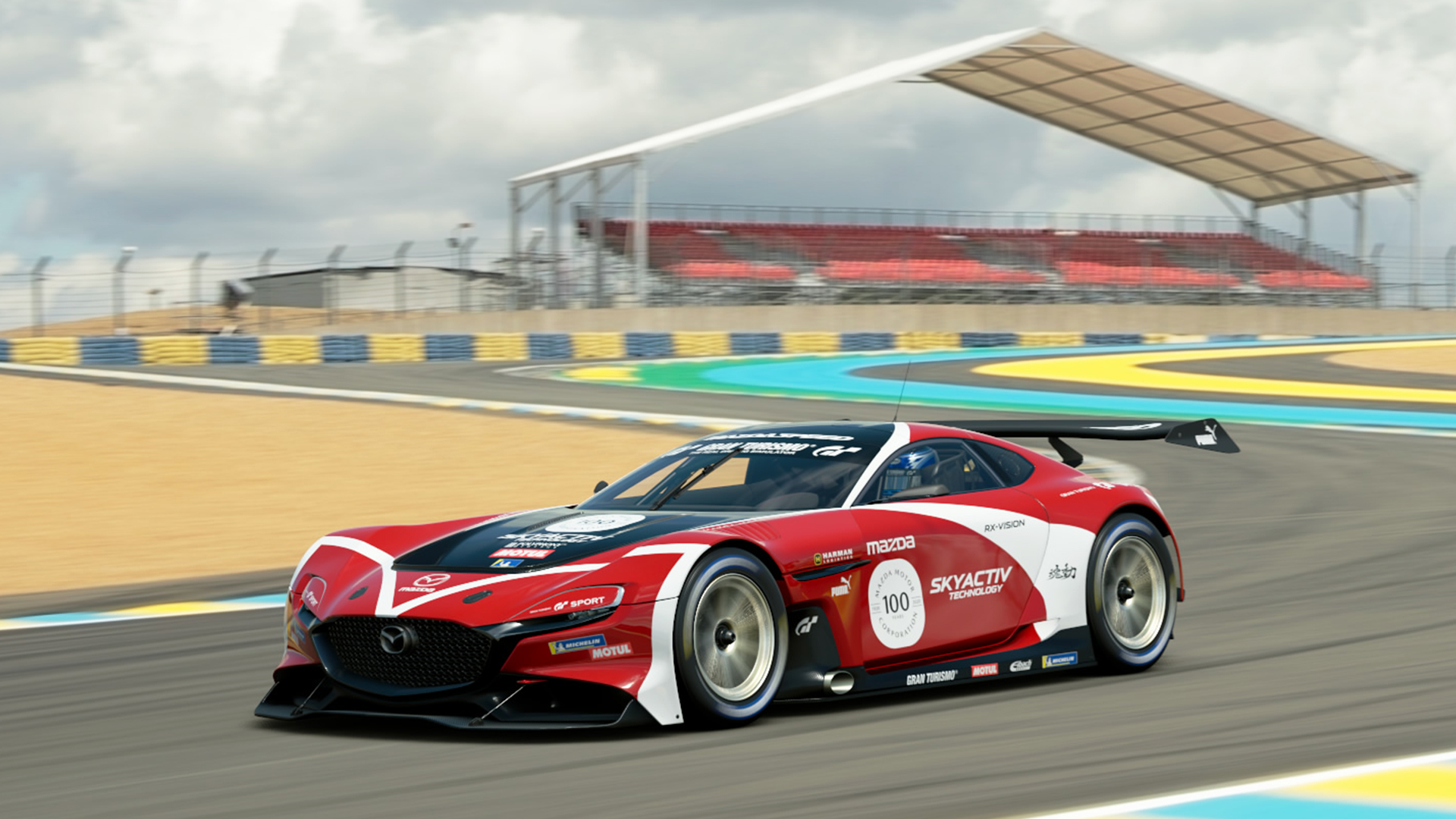 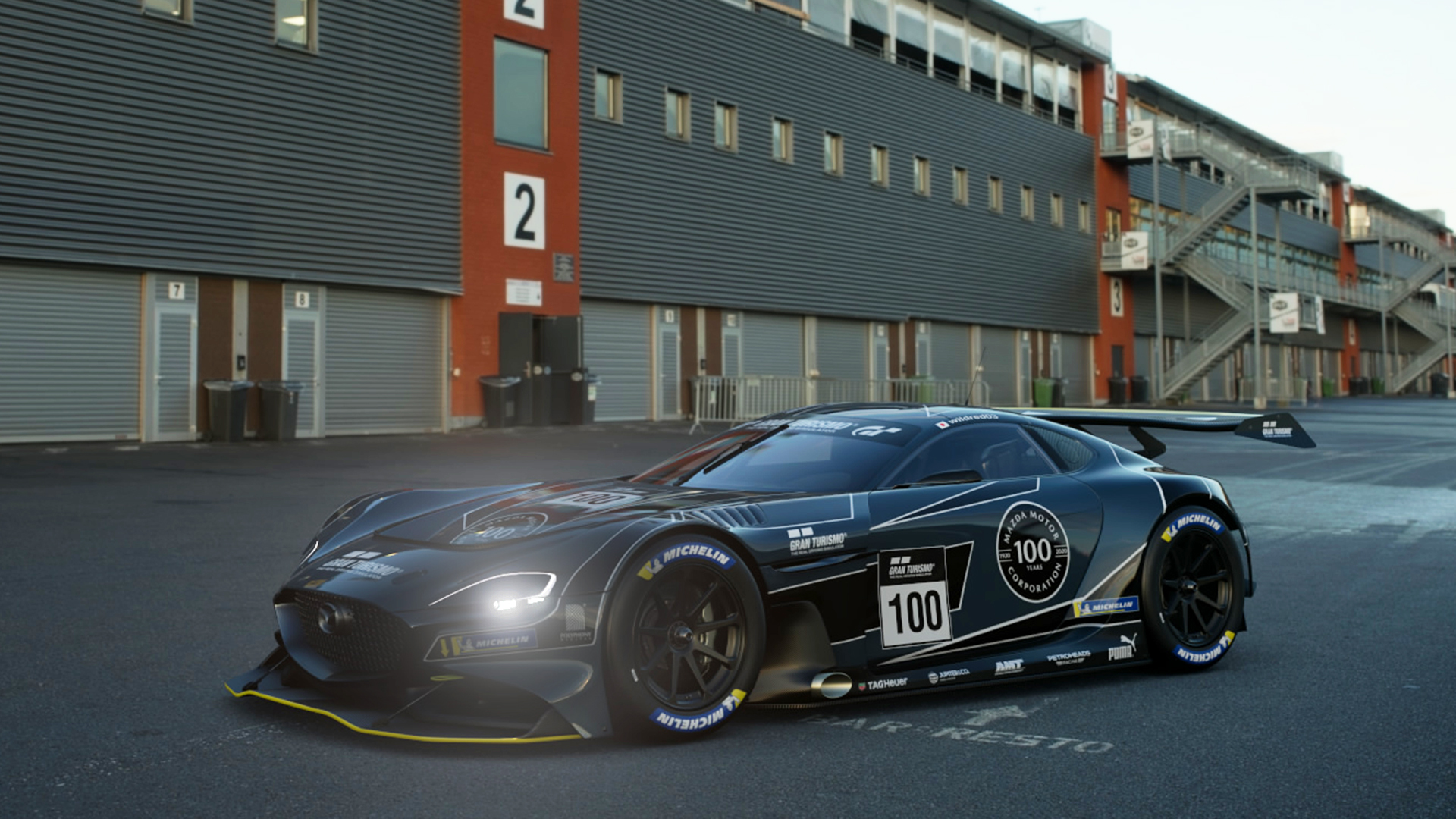 Firstly, I would like to thank everyone for the many entries received from all around the world. Once we started the selection process, we found that they were of very high level and full of allure, and we thoroughly enjoyed looking through them.

In selecting the winners, the criteria included elements such as designs that do not block the movements of the RX-VISION GT3 CONCEPT‘s form; a design that has originality and a clear theme; and a design that is simple and beautiful. We at Mazda Design also took the liberty to add a theme title to the winning designs.

Congratulations to the winners and thank you Yamauchi-san for giving us this opportunity. 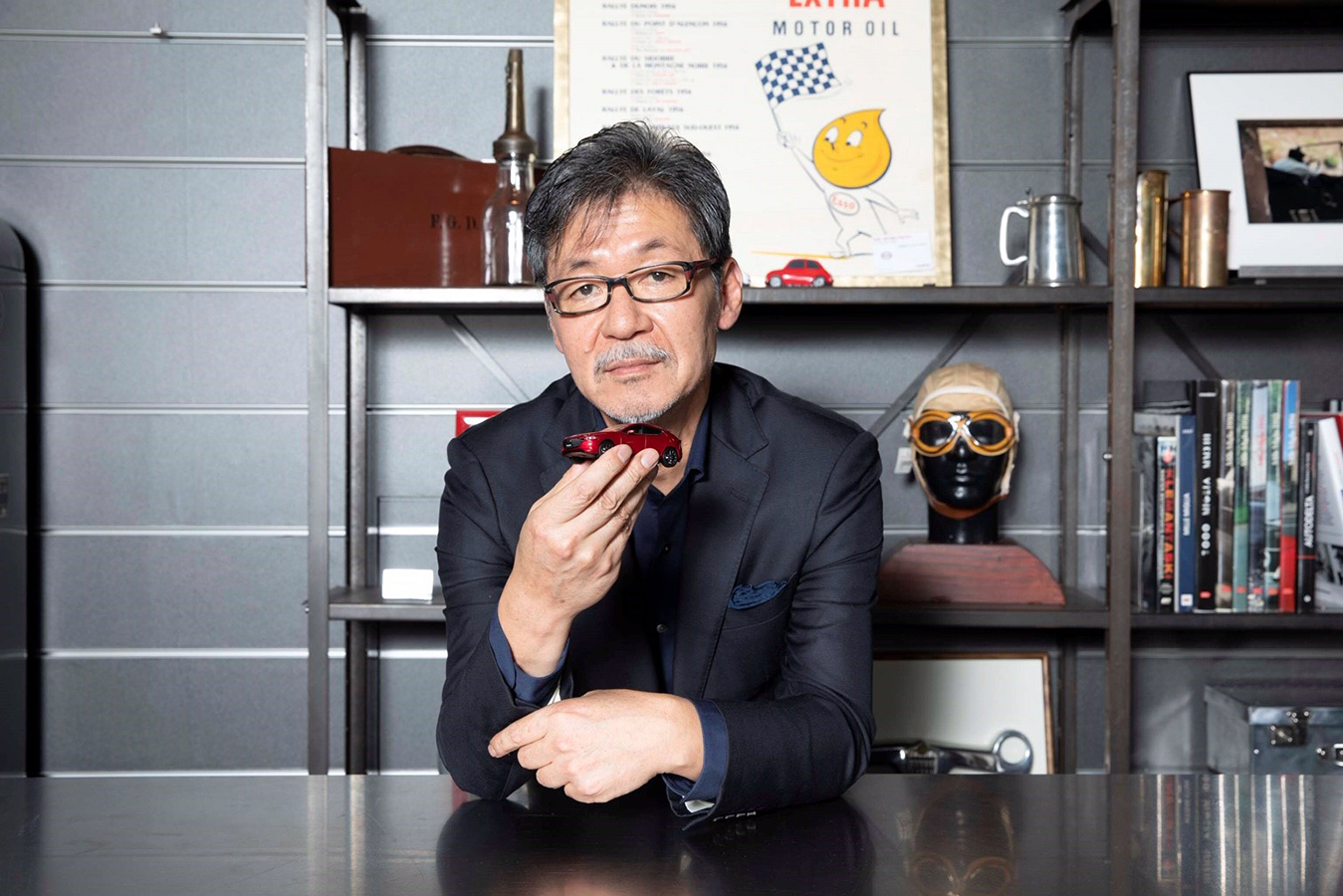 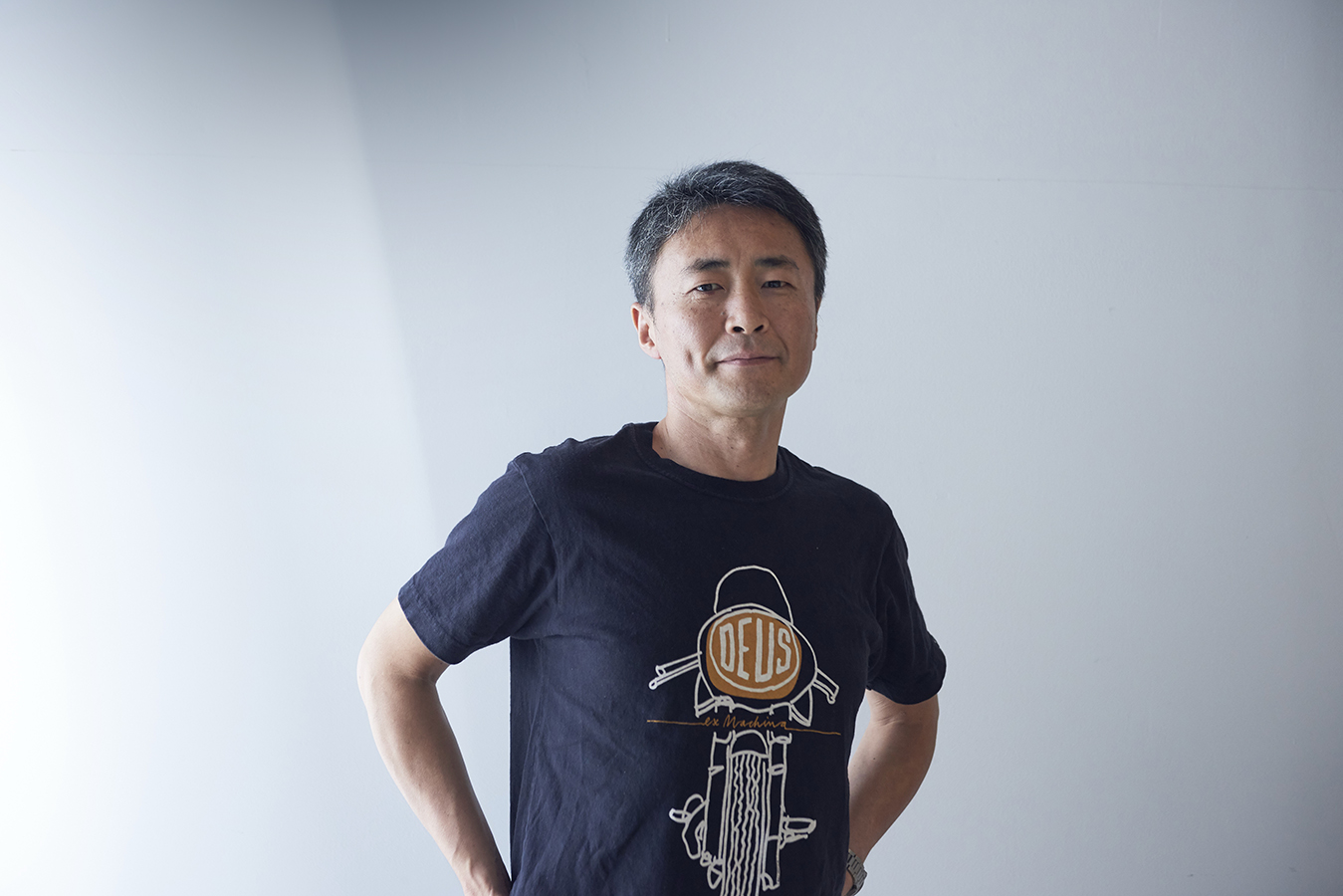 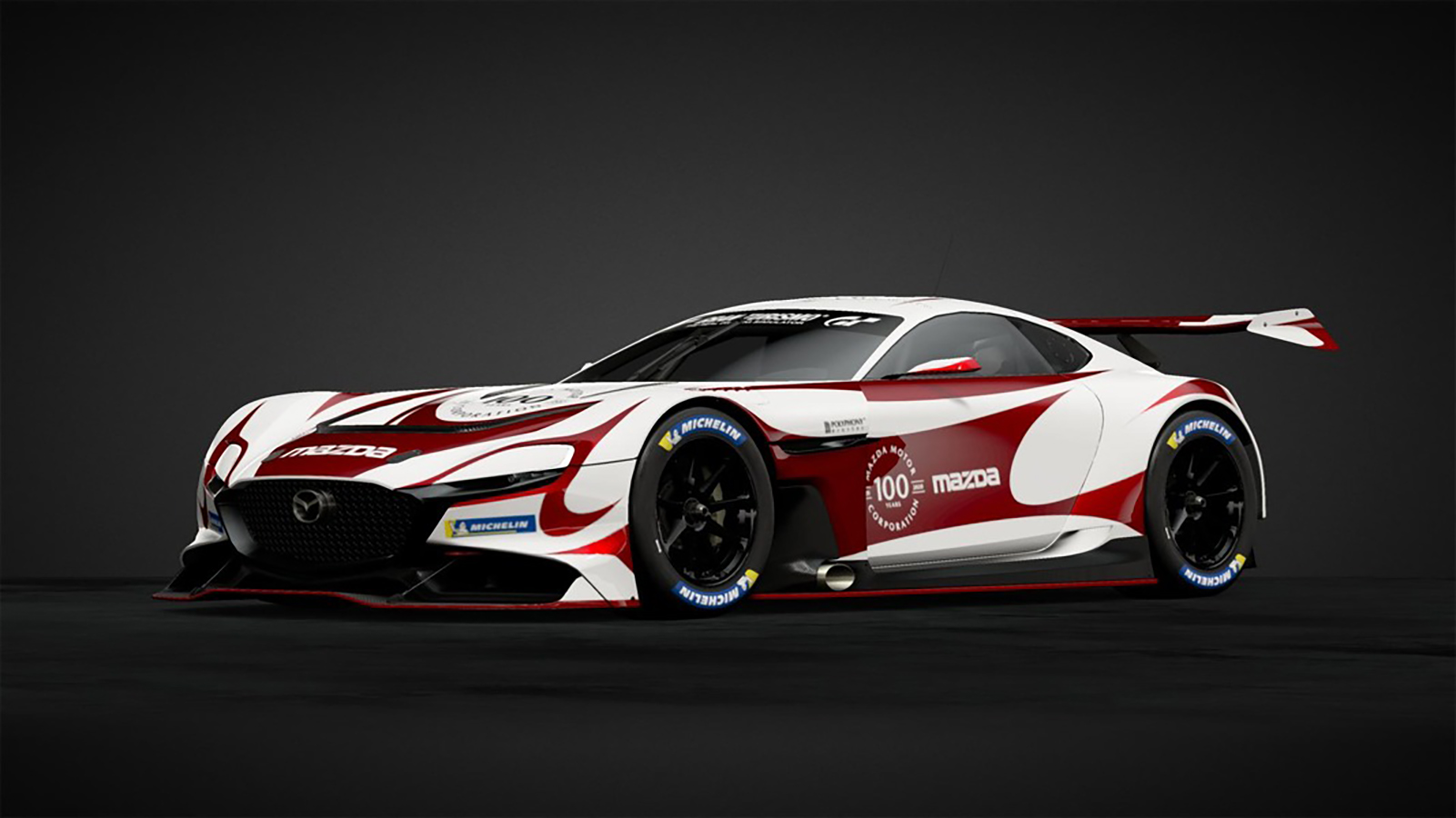 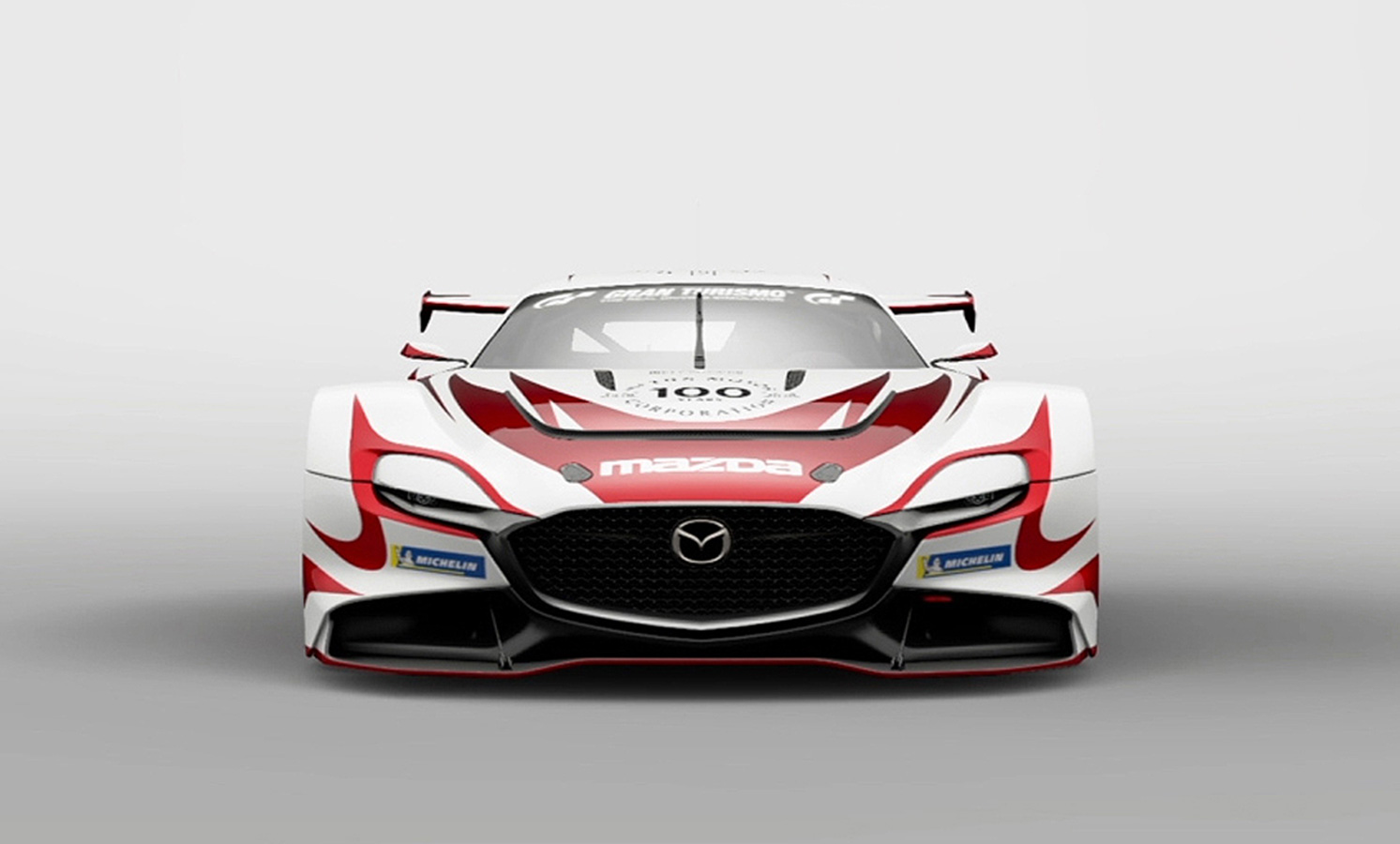 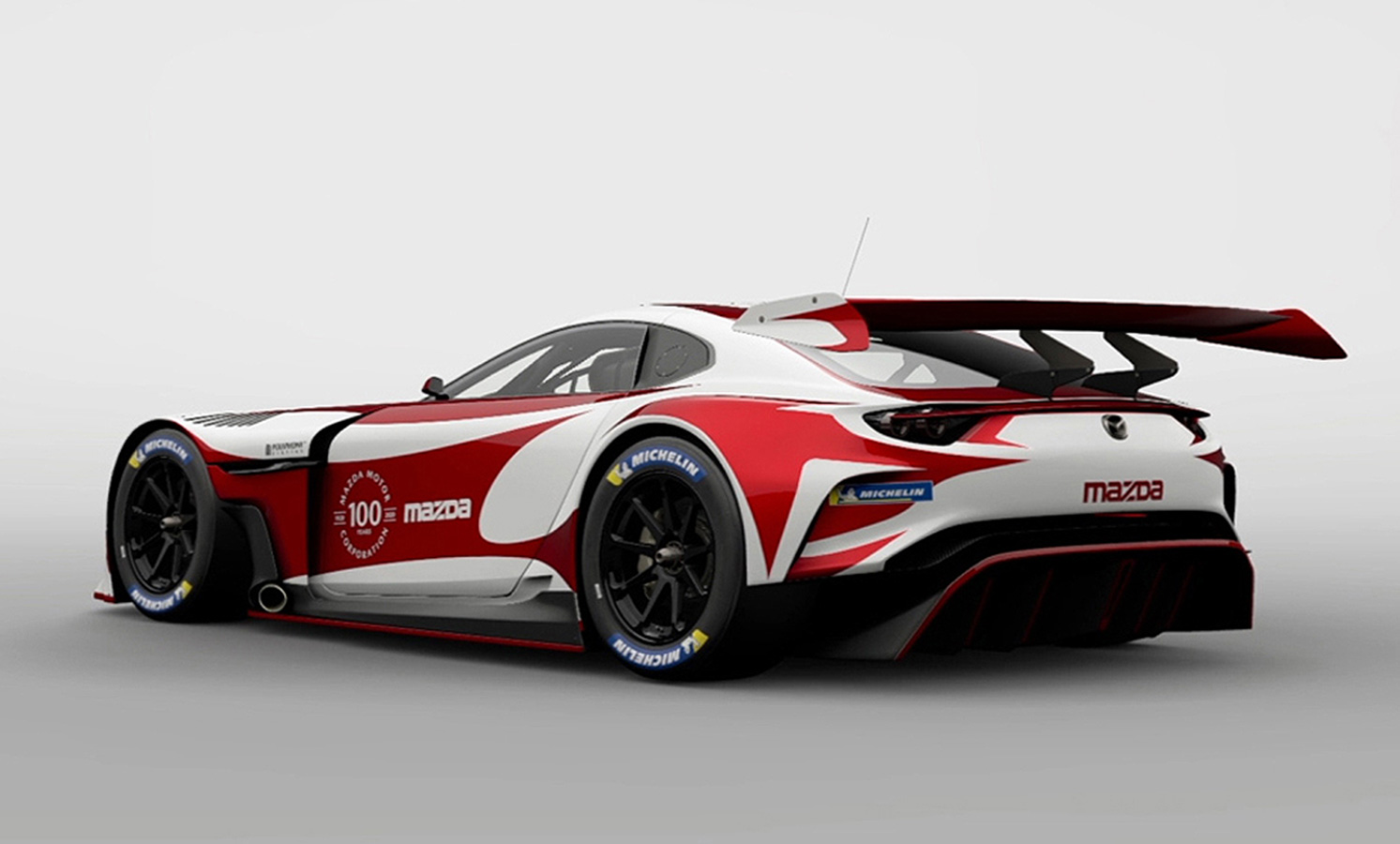 his is a design that does not spoil the flowing beauty of the base body and at the same time balances it with a strong, ferocious impression that is essential in a racing car. Befitting a Japanese brand, the design utilises a style of ‘Kumadori’ Kabuki make-up as its theme. The ‘Sujiguma’ make-up pattern that represents strength and justice is used as its motif. While this is a difficult theme, it blends seamlessly with the shapes of the RX-VISION GT3 CONCEPT from any angle you look at it, and rather than overly expressing 'Wa' (harmony), it clearly exhibits its racing orientation. It is a challenge to try and create such a simple but complicated design, and I have high regards for this level of perfection.

I’m very happy that my design was selected by the father of the Mazda ‘Kodo’ design and the RX-Vision as the Grand Prix winner. The RX-VISION GT3 CONCEPT is a beautiful car designed in line with Mazda’s ‘Kodo’ – ‘Soul of Motion’ concept, and I struggled to find a theme for it when I first decided to create a design for the car. I looked for something that is fitting for a Mazda and a Japanese car, and looked for things in everyday life for my ideas. The Kumadori came to mind out of the blue. Personally, the part that I really worked hard on was the area around the headlights, focusing most on how to give a powerful impression efficiently. I think I was able to draw out the smooth features of the body through a design that uses curves throughout the car, and by limiting the body color to just white and Soul Red, I think I was able to give it a refined atmosphere. 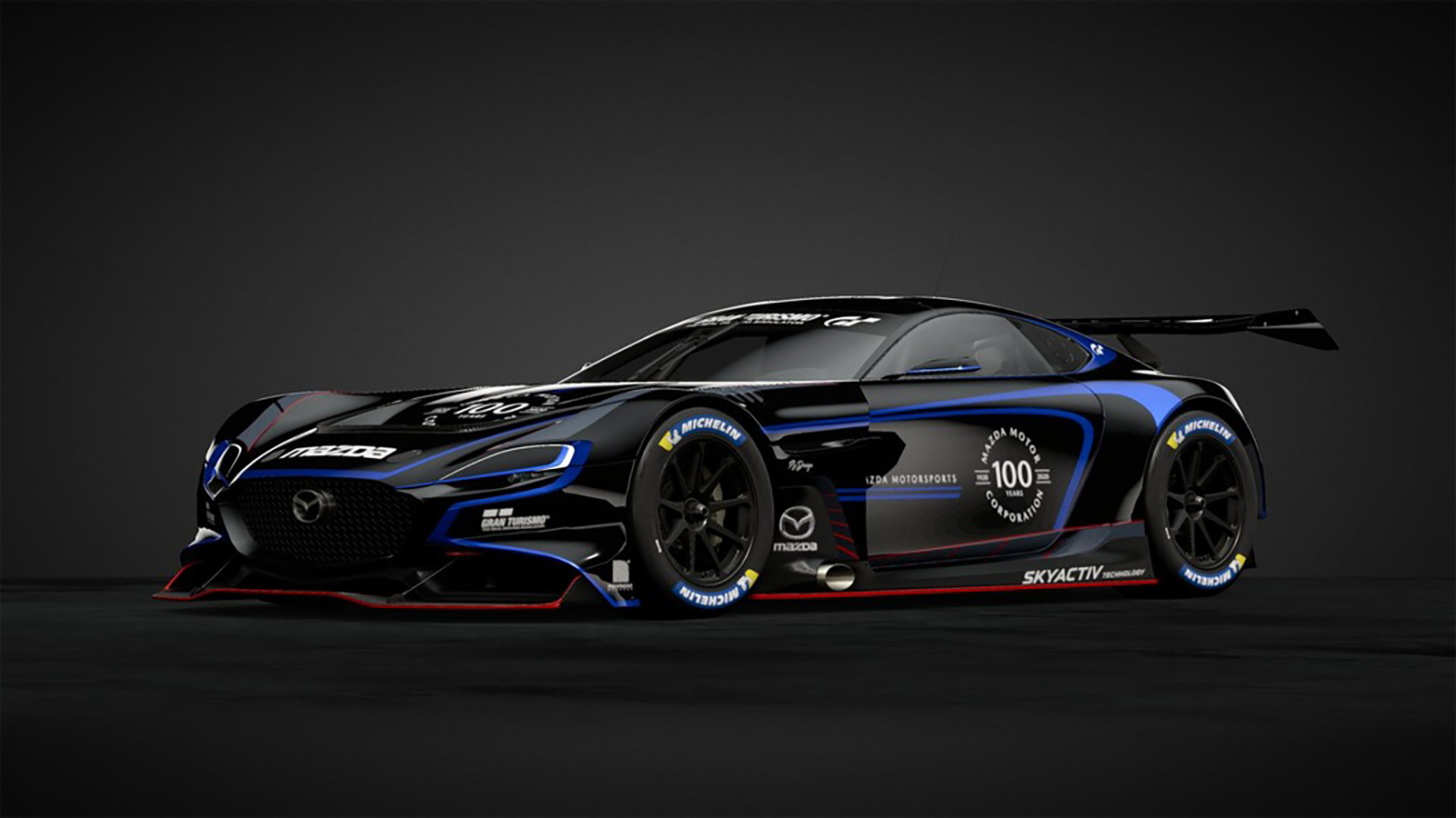 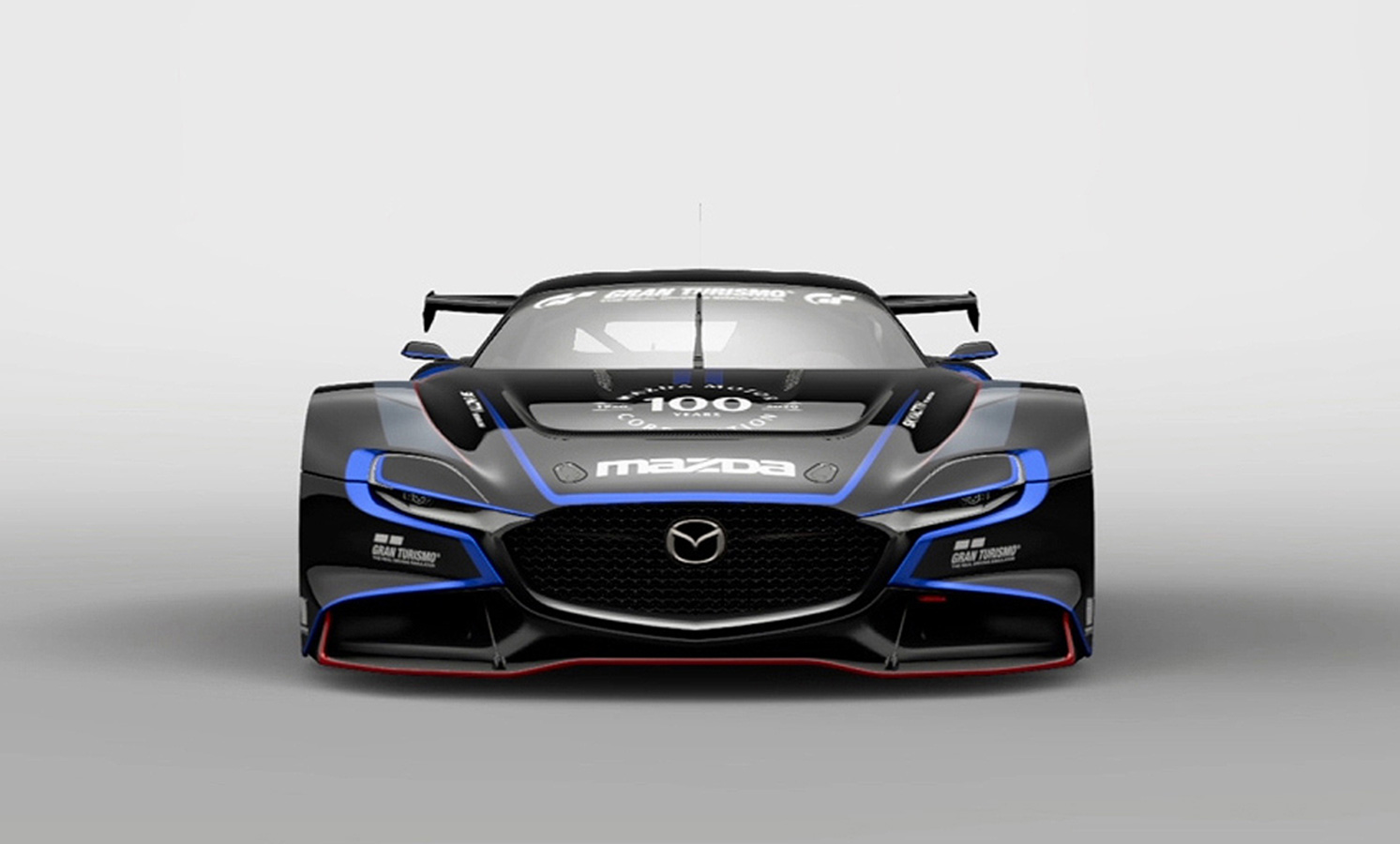 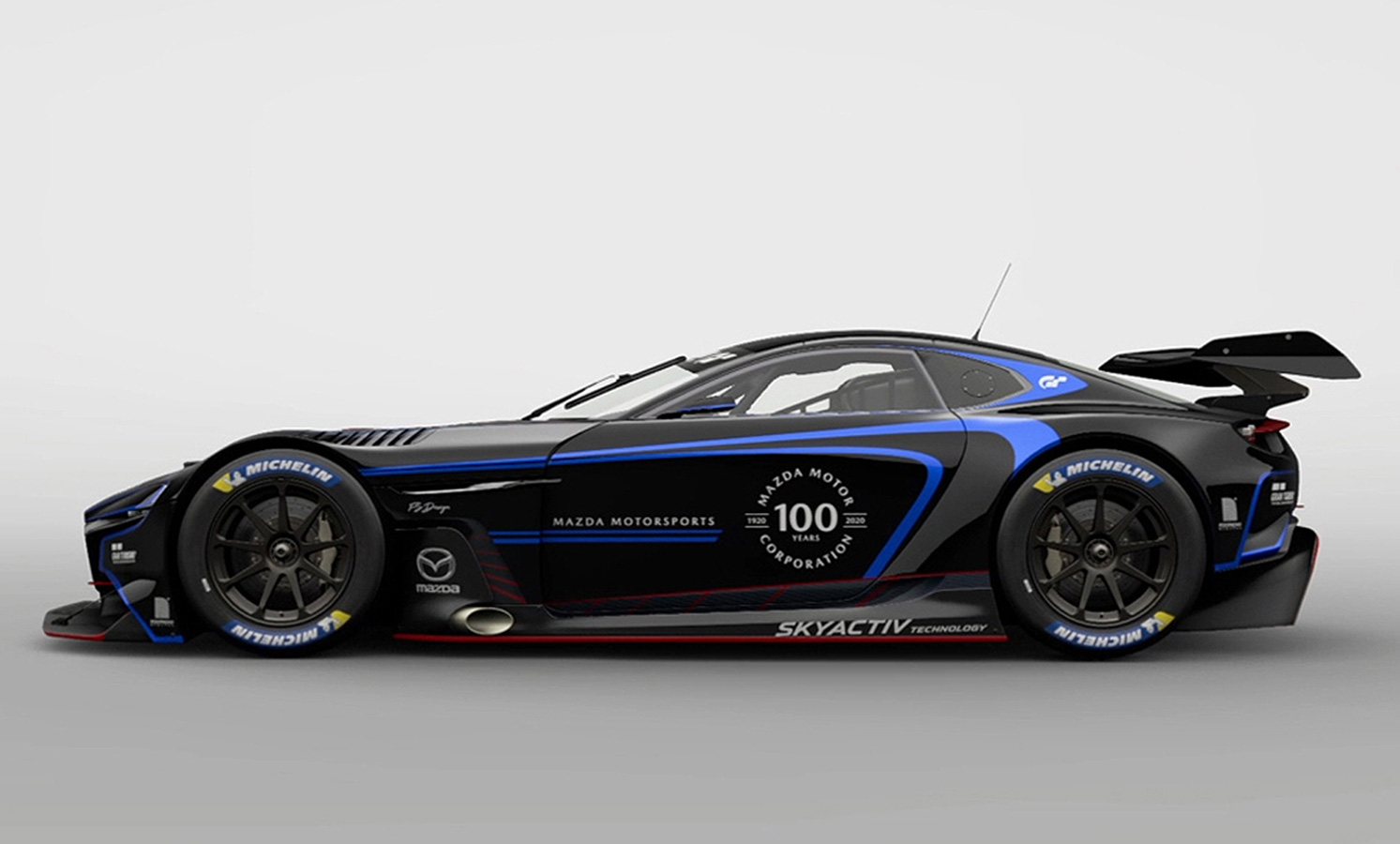 The designs for the livery when we normally race often tends to be something that hides the deficiencies in that car’s proportions. If the eyes/headlights of the car are wide apart, we would add a stripe in the center. If the body is thick and the car appears cumbersome, we would change the colors on the top and bottom to make it look thinner. In this way, my image of the livery is like 'make-up', but the RX-VISION GT3 CONCEPT is a beauty which already has perfect proportions and front mask to begin with; that is why I chose this design that has natural, minimal make-up. If I were to race in this car, I would like to race in this livery.

Thank you for selecting my design out of the many submissions. I’m very honoured to be selected for the Grand Prix award. The concept for this design was a cool look that is definitively Mazda. I’ve also included design elements that are seen on cars like the LM55 and the MX-5 Cup cars to try to express a very Mazda look. This machine has a very aggressive design and I felt that the car already has the look of a race car as is, so I avoided adding complex colors and kept in mind Mazda’s design philosophy of ‘opulence in open spaces’, and kept it simple. Another key point was that I also used white lettering for all the logos to better unify its atmosphere. 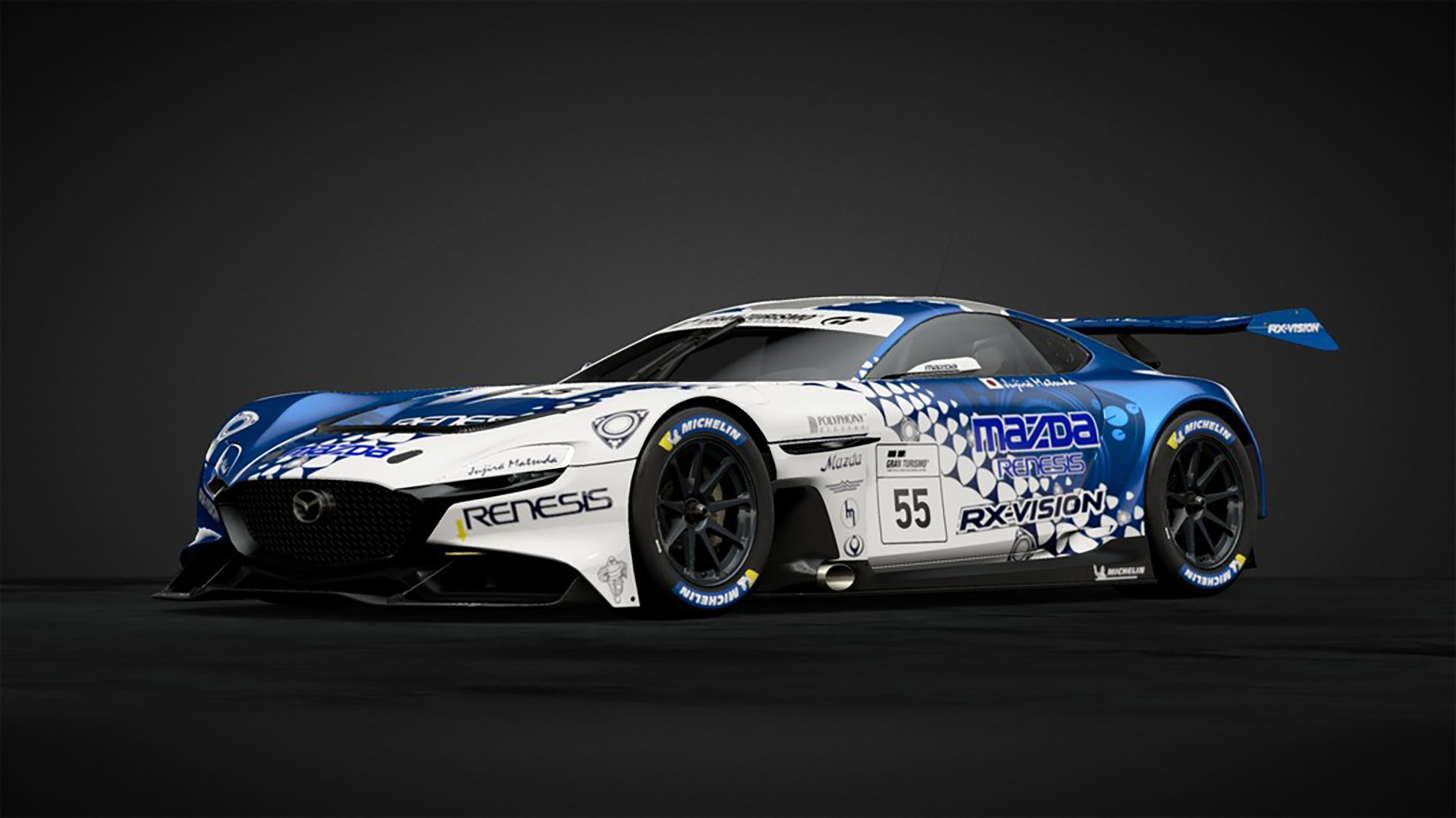 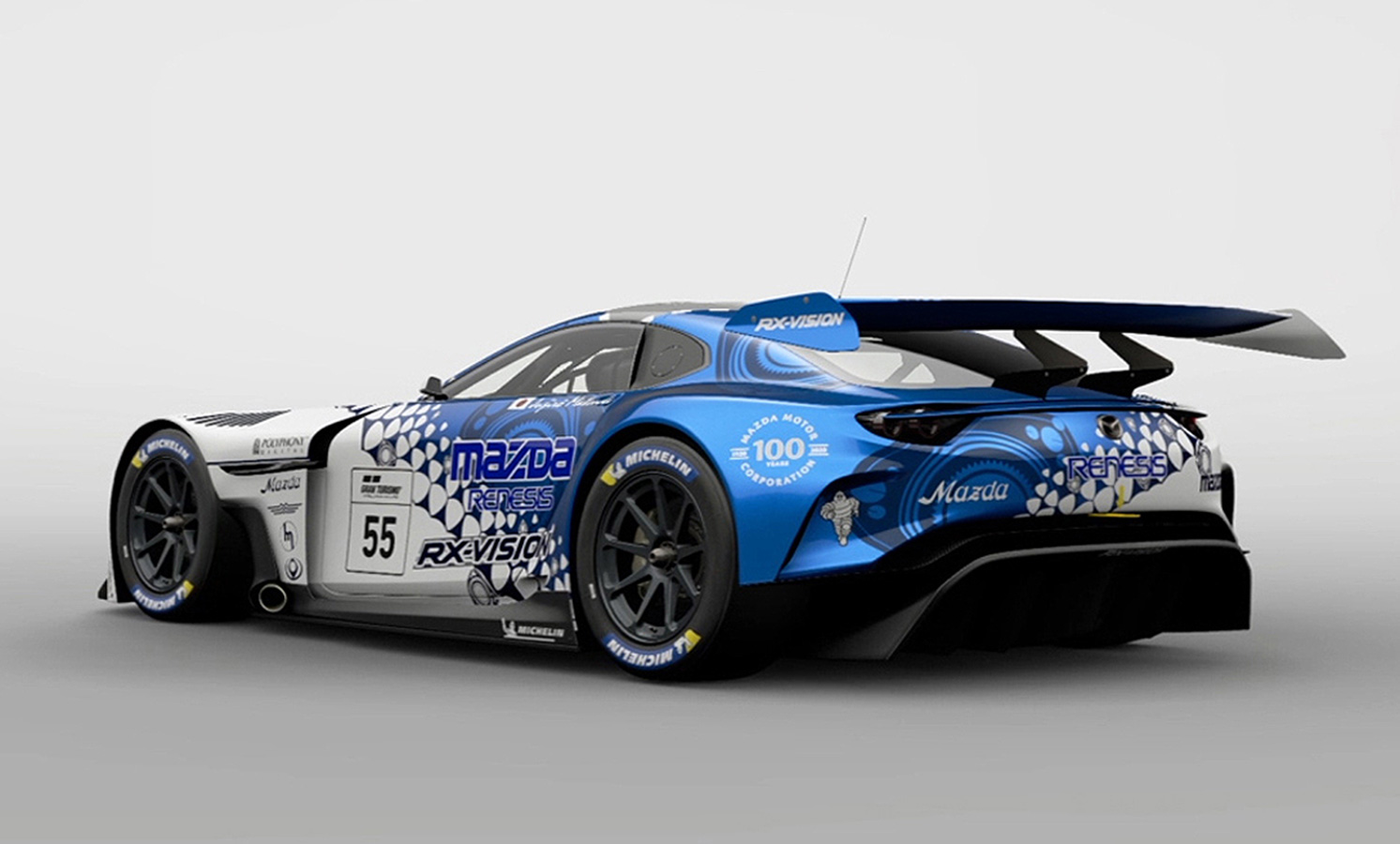 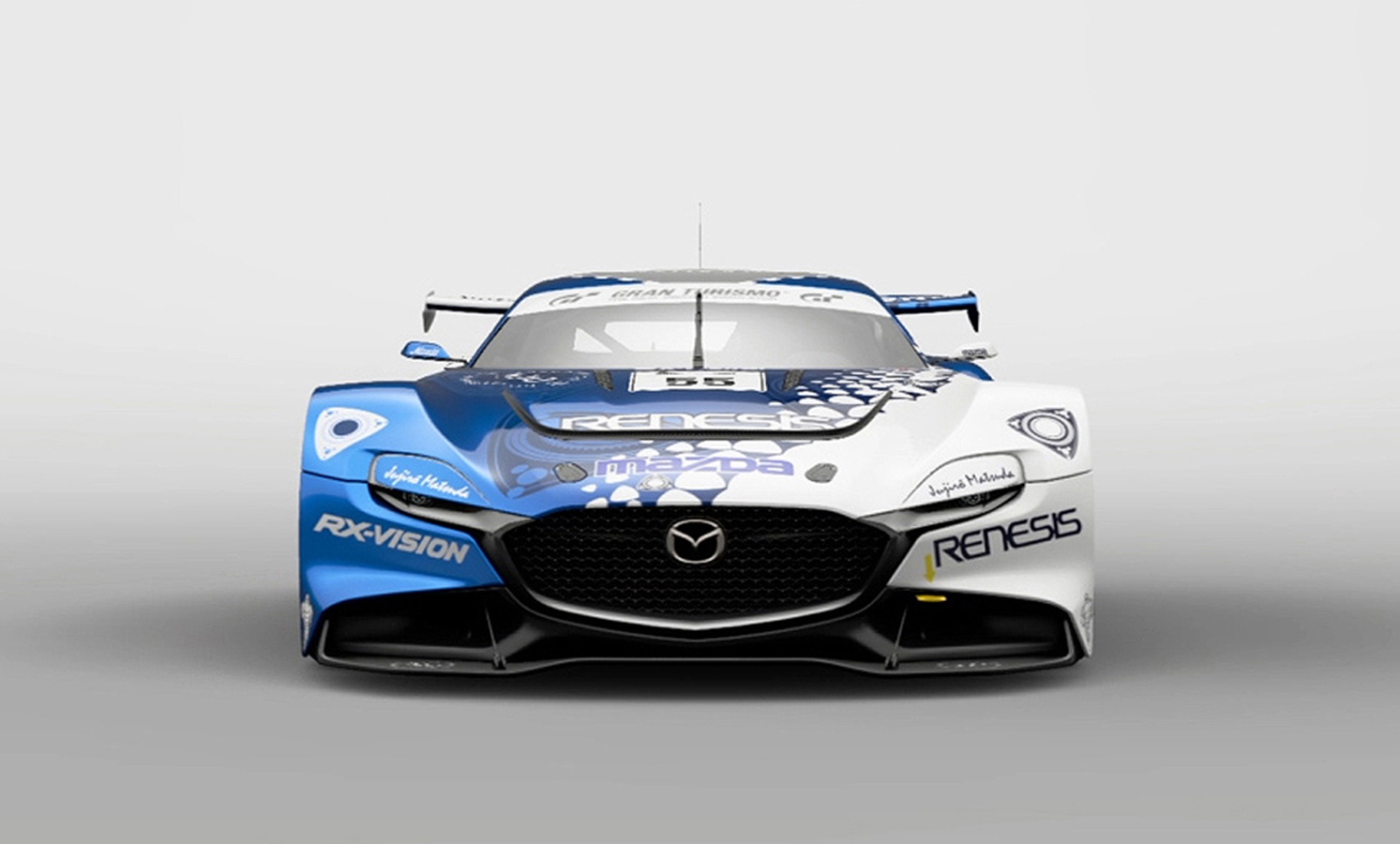 This is a submission that shows respect to the Rotary engine in its design. The white and blue two-tone design is asymmetrical on the left and right, and the graphics are very meticulously controlled. (Actually, thanks to this livery contest we in the Design Team discovered that the RX-VISION GT3 CONCEPT looks good in white-based body colours). The design also includes a bit of playfulness, with logos from the past, and displaying the name of our founder, Jujiro Matsuda as the driver. We could really feel the love and high expectations for Mazda coming all the way from France.

When I was contacted I couldn't believe it, I am proud to have been selected and truly grateful to Mazda for having chose my work, I want to say a big 'thank you' to you. In my opinion, what best characterises Mazda in the world of motor racing is their perfect mastery of the rotary engine, as their superb victory at the 24-hours of Le Mans in 1991 proved. I was lucky enough to witness the 787B roll on a circuit during the 2011 edition and the RX-VISION reminded me of this moment; I wanted to represent their resemblance to this design inspired by the rotor. 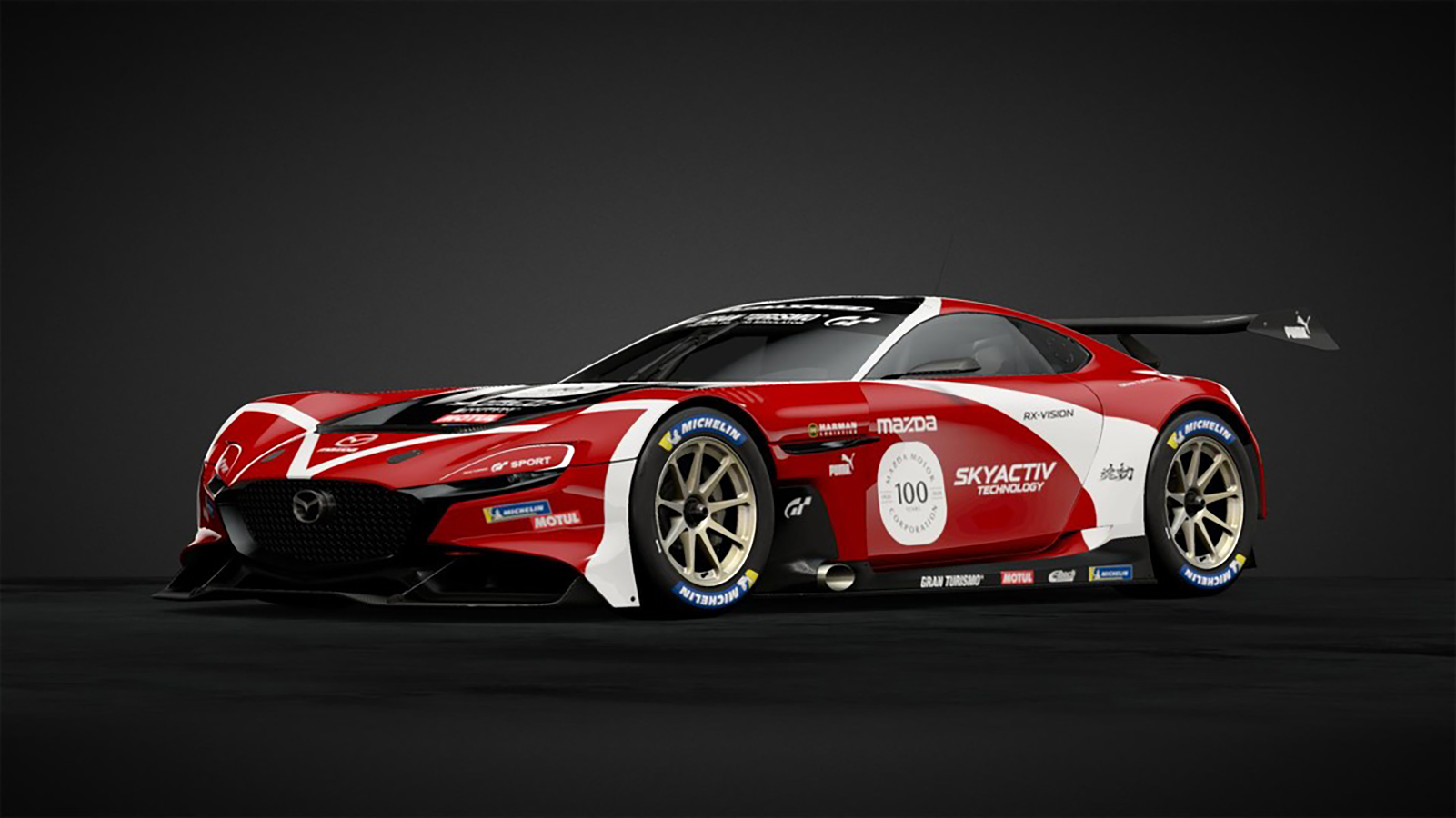 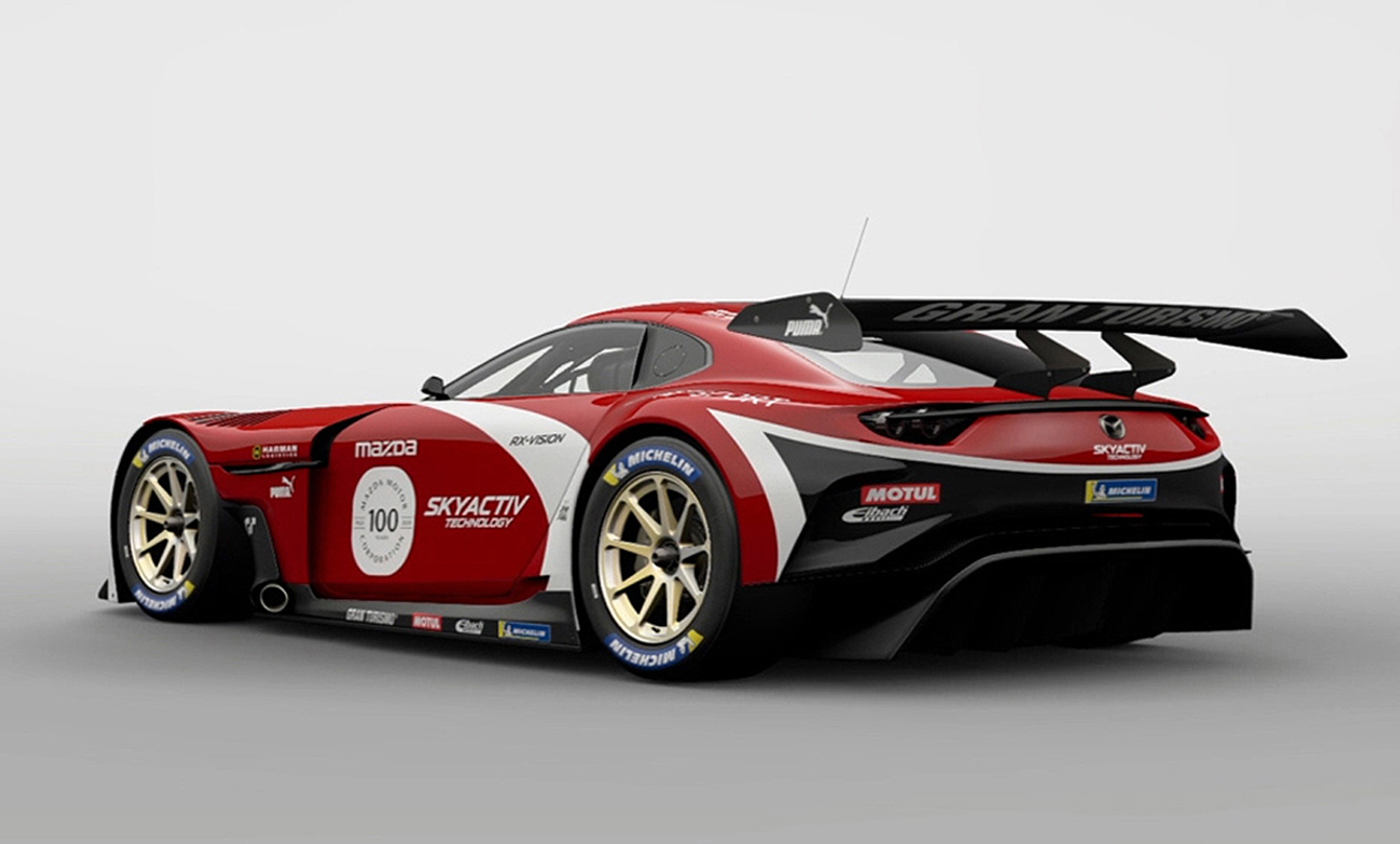 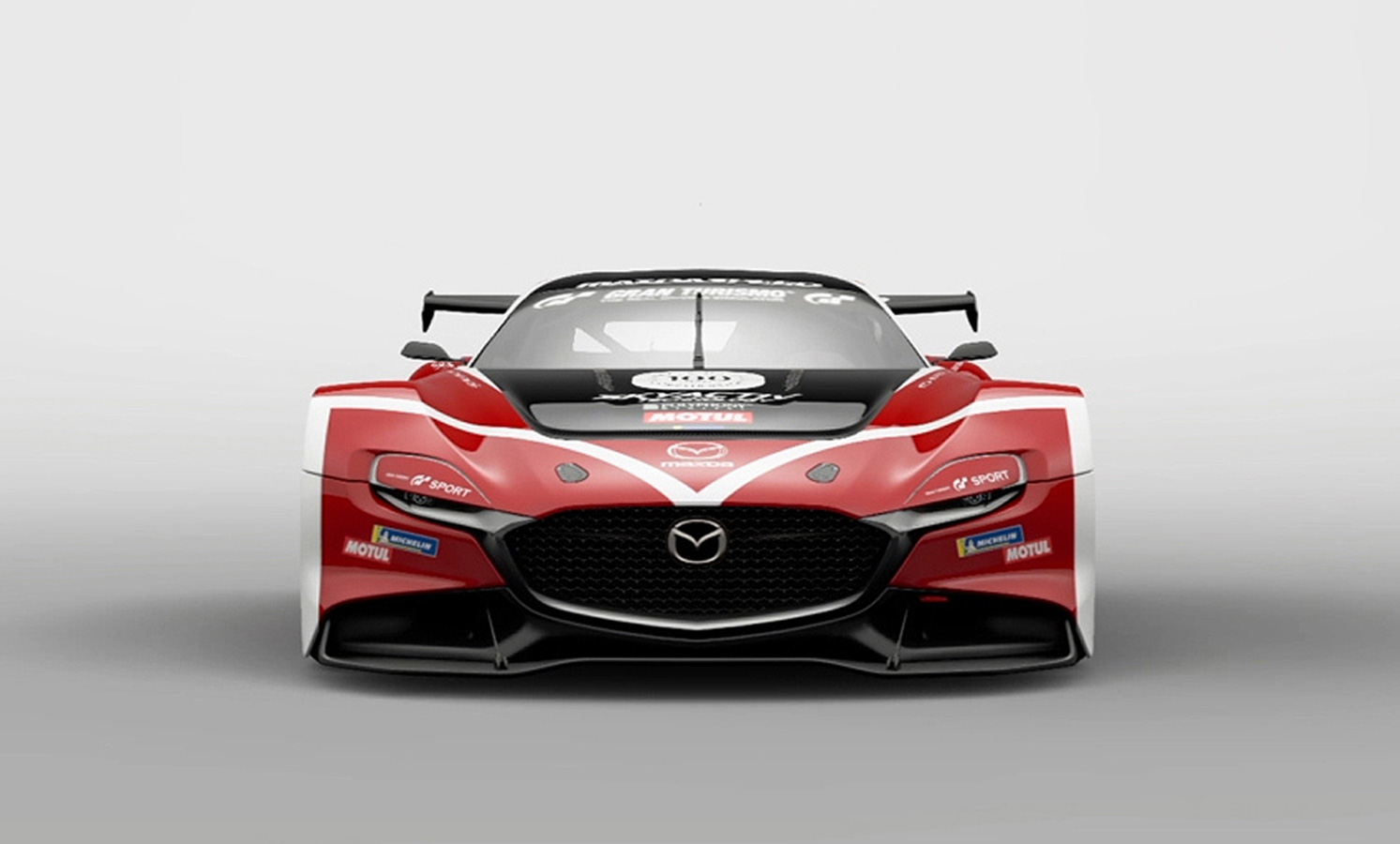 I had never expected to be one of the winners and I’m very surprised. If people like it, it would make me very happy to see it used in the game! I used white lines with Mazda’s distinctive red as the base. The white lines are laid out so that it looks like the M of Mazda depending on the angle. 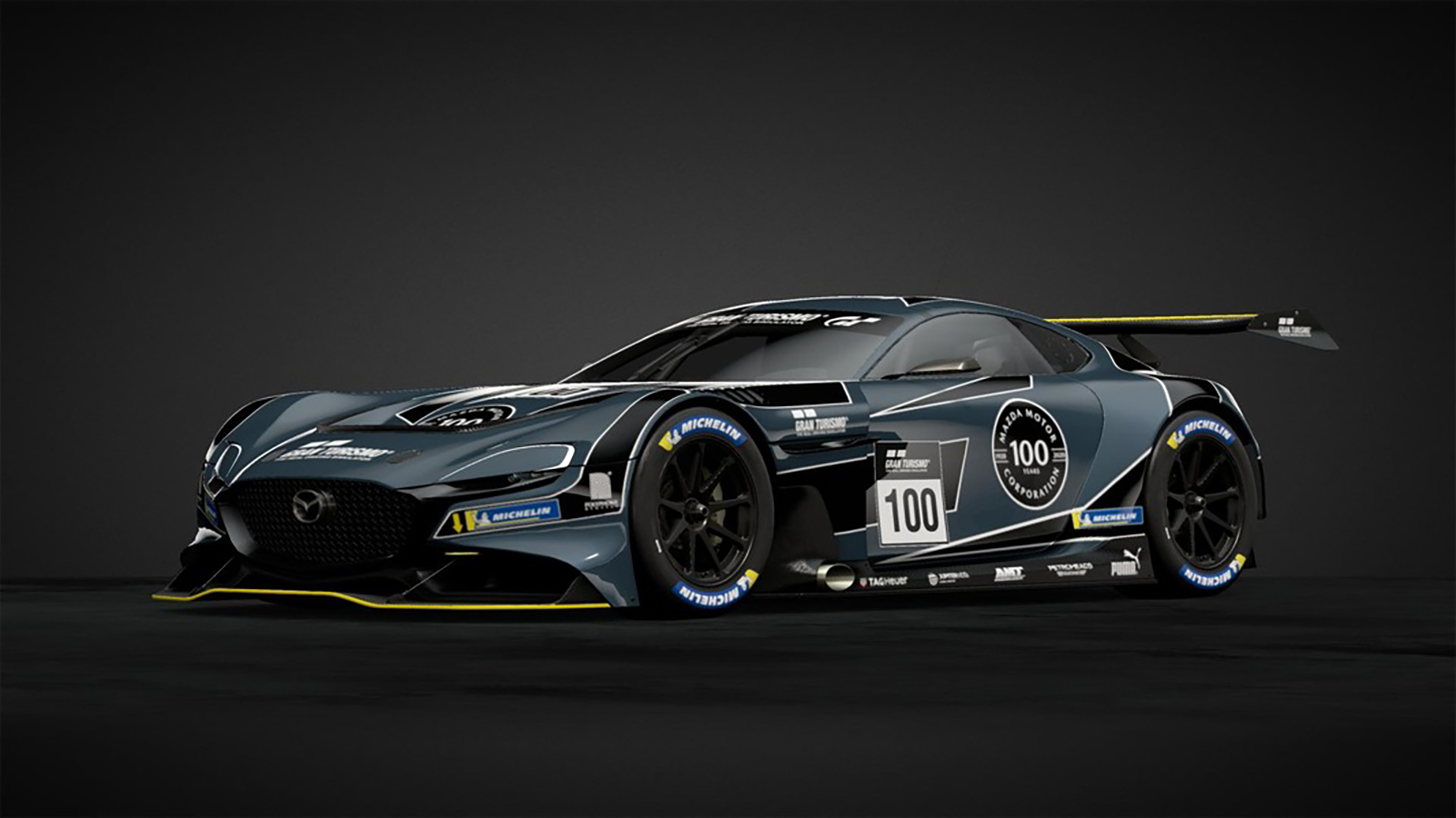 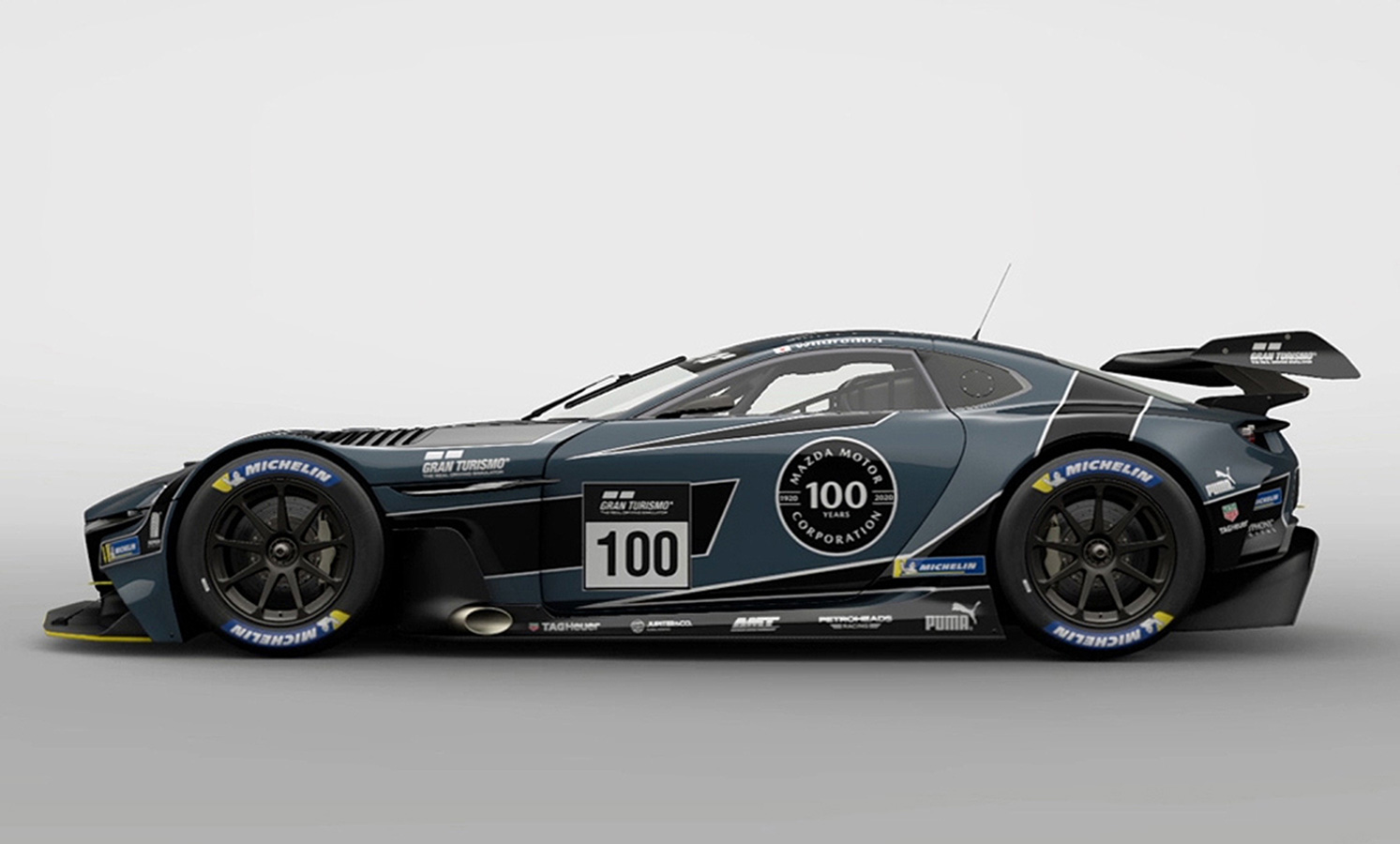 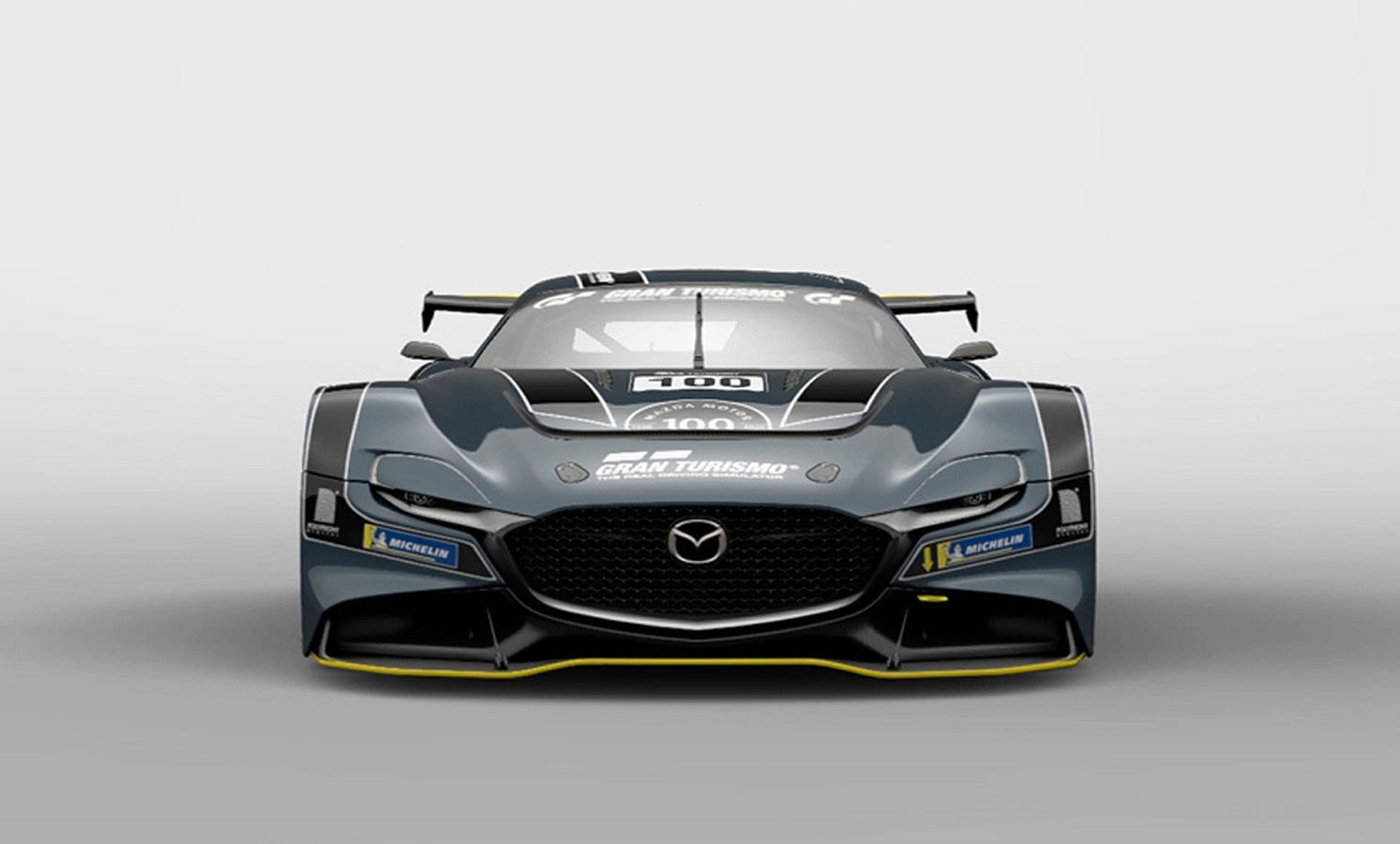 This is a design that achieves the look of a racing car utilizing the Polymetal Grey body colour. The contrast between the organic RXV body and sharp black graphics, and the white pinstripes highlighting it, gives it a very aggressive look. Its graphic balance is just on the border where it would become too busy if taken any further, and the yellow accents work very well with the Polymetal Grey, giving it a modern impression.

Having something I thought was good being recognised might actually make me happier than winning races online. After the RX-VISION GT3 CONCEPT was announced, and before the car even appeared in-game, I was imagining the colours that look good on this car. I was thinking initially that the base colour should probably be the main theme colour, 'Soul Red Crystal', and I had originally planned to make the design red with black. But when you look at it in- game, the 'Polymetal Grey Metallic' also looked really good – and in the end, I settled on a design with black bordered by white, to make it so that it could be either of the two colours. I think I was able to make something that works with either colour being the base one, and something that has a 100th anniversary feel to it. The body has flowing lines, so in contrast to this, I made the design have corners by utilising squares and triangles. As I wrote above, I wanted to bring out the base colour, so I balanced it so that there wouldn’t be too many black parts to it.

Both the winners of the 'Grand Prix' and the 'Honourable Mention' awards will receive original RX-VISION GT3 CONCEPT sketch panels drawn by Mazda designers. Congratulations to all the winners!