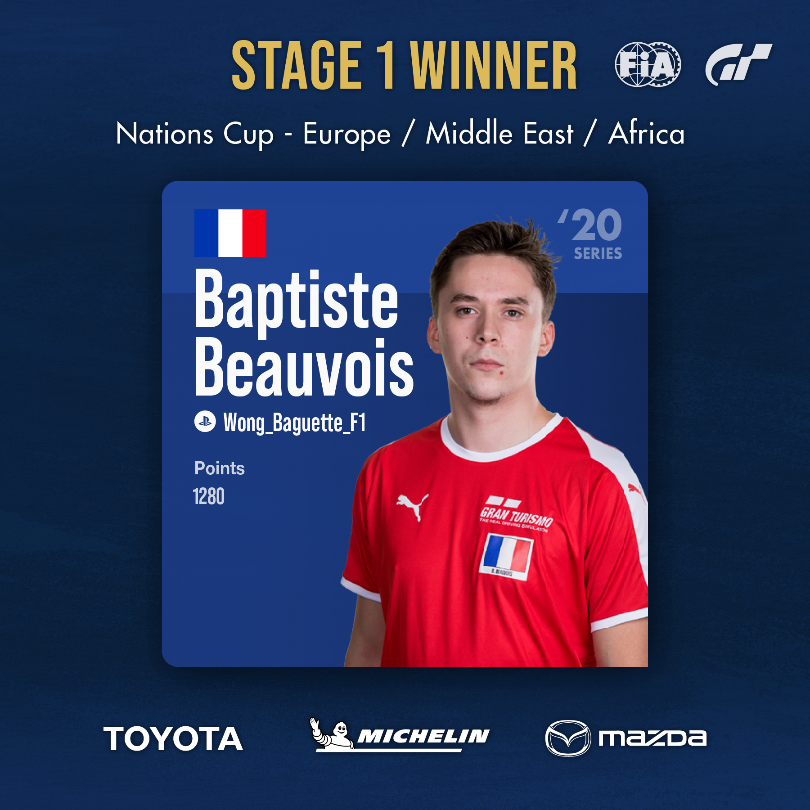 The first stage of the 2020 Nations Cup got underway on April 25th.
Kevelham (HRG_RK23) of the Netherlands got off to a good start, taking 433 points in Round 3, but found points hard to come by in subsequent races, allowing the chasing pack to make up ground.
France's Beauvois (Wong_Baguette_F1), on the other hand, remained in good form throughout, peaking in Round 7, where he took 448 points.
Round 7 was less successful for Italy's Gallo (Williams_Bracer), who only managed 265 points, his lowest score overall. Despite this, his consistently high scores in other races meant that he emerged as Beauvois's closest rival for the stage.

The final race of Stage 1 featured Gr. 1 cars, and took place on the Circuit de Spa-Francorchamps.
Italy's Gallo started in pole position, with the stage leader Beauvois taking second place on the grid. The stage was set for a fierce showdown between the pair.

Gallo opted to start the race with soft tyres, while Beauvois went for medium tyres. It was expected that this would help Gallo to establish a lead at the start of the race, but disaster struck on Les Combes as he overran the corner. Beauvois saw his chance and slipped into the lead, despite operating with the disadvantage of medium tyres.

This was a huge blow to Gallo's hopes, as his plan had been to use his soft tyres to build up a lead in the early stages of the race. It didn't seem to affect his driving unduly, however, and in fact he managed to reclaim the lead on the second lap, overtaking Beauvois on the Eau Rouge corner.

Beauvois's line had only slipped slightly, but this gave Spain's Lopez (Williams_Coque14) the glimmer of opportunity he needed to try and claim second place for himself. As the battle between the two intensified, Gallo was able to increase his lead at the front of the pack.

On the fifth lap, Beauvois switched from medium to soft tyres. Gallo waited till the ninth lap to switch from soft to medium, by which point he had established a seven second lead on the chasing pack. This meant that he was able to return to the track still in first place.
Every car apart from Gallo's was now on soft tyres, but thanks to some extremely clever driving, he was actually able to further extend his lead, building up a gap that not even the veteran Beauvois was able to close.

The mandatory tyre change on the final lap saw all of the leading pack switch to hard tyres. This made no difference to the overall standings, with Gallo crossing the finishing line more than two seconds ahead of Beauvois, thus completing a spectacular pole-to-win victory.

Unfortunately for him, however, it was not quite enough to overhaul Beauvois's points total, as the Frenchman clung on to top spot and claimed the first stage.