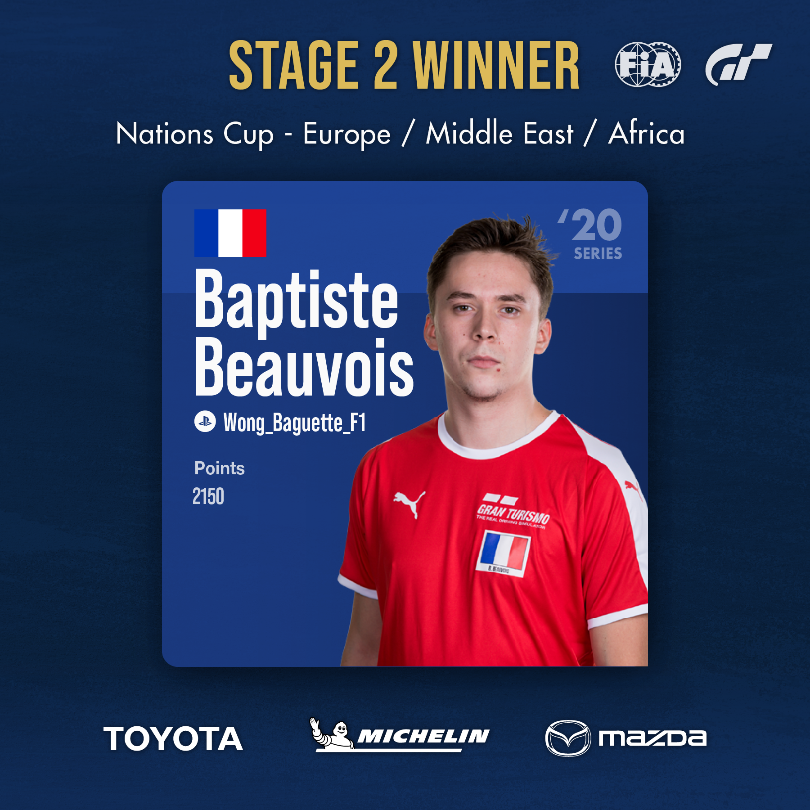 The Stage 1 winner, France's Beauvois (Wong_Baguette_F1), picked up where he left off, top-scoring with 406 points in Rounds 16 and 19 and maintaining a healthy scoring rate throughout.
Italy's Gallo (Williams_BRacer) got better as the stage went on, picking up 390 points in Round 15, 442 in Round 16 and 402 in Round 17. He went into the final stage in second place, his reputation as the hottest property in Italian racing well and truly sealed.


The final race of Stage 2 was a one-make race, with all drivers in a F1500T-A. It took place on the Circuit de Sainte-Croix-C.

Beauvois claimed pole position, while his closest rival Gallo had a nightmare qualifying session and had to start way back in 13th place. This compelled him to start on soft tyres in order to try and move up the standings as quickly as possible.

The final race of the stage also saw a familiar face making an appearance. Despite only taking part in five rounds, the UK's Suswillo (Williams_Adam41) was able to earn a place in the Top 16 Superstars. Fans of GT Academy and other past events may know him better by his old ID, GTP_Aderrrm.

Things became quite chaotic as soon as the race began, with Spain's PR1_JOSETE managing to seize first place by getting on the inside of Beauvois. Beauvois then suffered a further blow when he was given a 1 second penalty after being adjudged to have pushed Spain's Lopez (Williams_Coque14). Beauvois would subsequently be given another one second penalty as well.
There was also a lot of commotion further back in the pack, with many other drivers being given time penalties. It all meant that Gallo, starting on soft tyres way back in 13th place, was able to take advantage and move up to sixth. Things got even better for him after that, as he managed to overtake the stage leader Beauvois, who had fallen down to fifth place as a result of his penalties.
Beauvois would soon have his revenge, however. He gets the best out of any car he drives, be it a retail model, a touring car or indeed a formula car, and this race would prove to be no exception. He put Gallo under intense pressure, then seized his moment to pass him and reclaim fifth place.

By the fifth lap, after all cars had made one pit stop, Beauvois had managed to move up to second place, nearly making up all the ground he'd lost earlier in the race.

Then, on the sixth lap, he reclaimed the lead. However, he had achieved this feat by using soft tyres twice. In order to comply with the mandatory tyre change requirements, therefore, he would have to make one more pit stop than the rest of the field.

On the eighth lap, Beauvois switched to medium tyres, and re-entered the track in second place, with Spain's PR1_JOSETE in first.

Beauvois was able to overtake PR1_JOSETE on the ninth lap, but the fact remained that the Spaniard had already completed his mandatory tyre changes, while Beauvois still had to take one more pit stop.

Beauvois took his third pit stop on the final lap. PR1_JOSETE moved into first place, albeit with only a precarious two second lead to protect. Beauvois fought valiantly till the end, but was unable to make up the gap, and the 10 lap race ended with PR1_JOSETE as the victor.

PR1_JOSETE dominated the race, and has often been touted as one of the next generation's top talents. However, since this was the second time he had failed to meet the criteria for the Top 16 Superstars, it will be interesting to see how he develops from here. He is undoubtedly a skilled driver, and it would be a shame to see those skills go to waste.

Beauvois had an up and down final round that was certainly anything but uneventful, but he will probably be pleased with his second place finish, considering everything that happened during the race.
His solid, consistent point scoring throughout the stage ensured that he ended it with a firm grip on top spot and a well deserved stage victory.