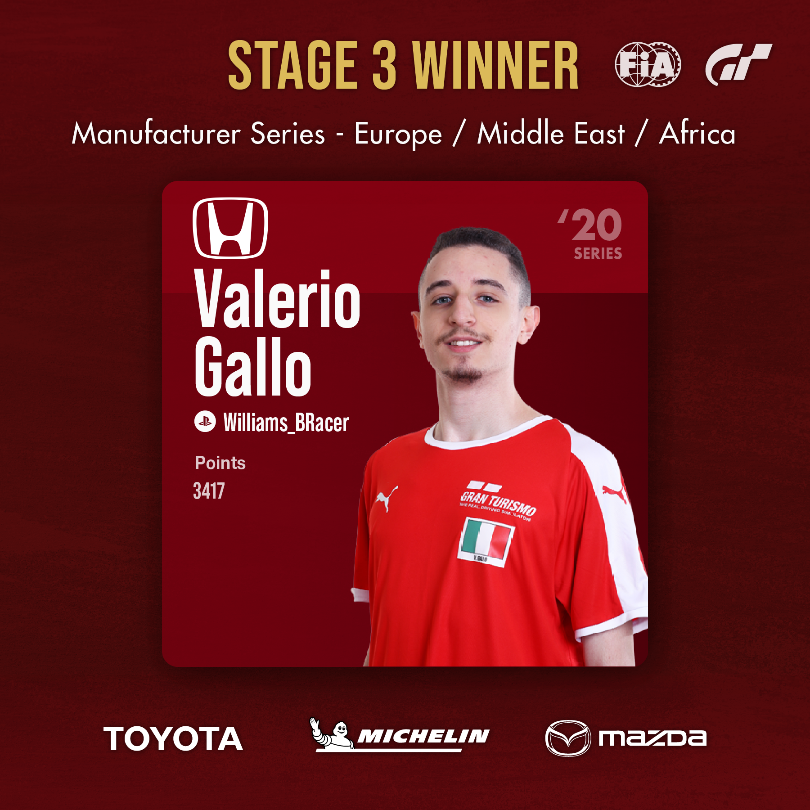 The third stage of the 2020 Manufacturer Series got underway on July 7th.
Mercedes-Benz's Beauvois had ended the second stage on top of the pile, but Honda's Gallo (Williams_BRacer) was close behind, and certainly within striking distance.

Beauvois's form suddenly took a turn for the worse on Stage 3. Indeed, he would fail to score a single point throughout the stage.
Gallo, on the other hand, was in the form of his life, scoring points in Rounds 21, 24, 26 and 28. Indeed, his performances were so good, his overall victory was confirmed before the final race even began.

The final race of Stage 3 featured Gr. 3 cars, and took place on the Tokyo Expressway.
Neither Gallo nor Beauvois took part in the race. As mentioned above, Gallo's overall victory over Beauvois had already been confirmed, and neither had any particular reason to participate.

Soon after the race began, Romero pulled off an impressive piece of skill, emerging from Moysov's slipstream on the approach to turn 11 and overtaking him to move into first place. A fierce battle between the top two then ensued, with only 0.1 second separating them. Both cars took a pit stop on the ninth lap, but this had no effect on the gap between them.
Moysov waited patiently for a chance to overtake Romero, but he was unable to find the right time to make his decisive move.

Moysov finally went for it on the final part of the final lap. Using Romero's slipstream, he managed to draw level with his rival, and both cars were neck-and-neck going into the final corner. In the end, however, it was Romero's position on the outside that would prove decisive, allowing him to exit the corner ahead of Moysov and cross the finish line in first place. It was an extremely valuable victory for the Volkswagen man, who until this point had had little experience of fighting for first place in a race.

It was Gallo who emerged victorious in the overall series rankings, however, finishing up a huge 95 points ahead of Beauvois in second place. Gallo had been there or thereabouts in 2019, but this was his first title, and it was a clear indicator of the incredible progress he has made.