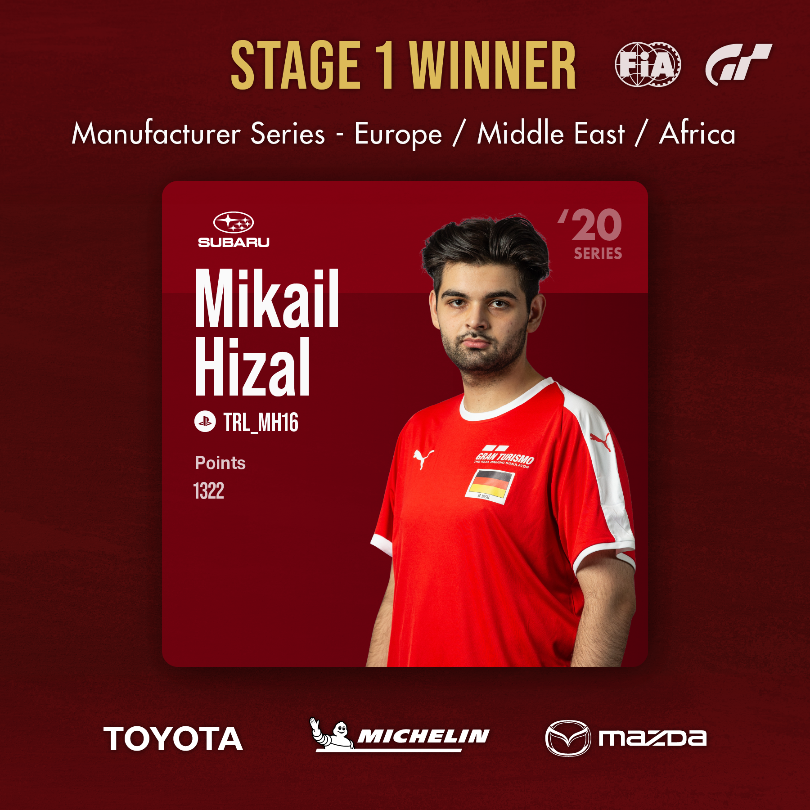 Subaru's Hizal (TRL_MH16) racked up great scores throughout the stage, including 433 points in Round 3 and 453 points in Round 7. Lower down the leaderboard, Mercedes-Benz's Beauvois (Wong_Baguette_F1) and Lamborghini's Scibilia (SpideeR_3A) found themselves embroiled in a close contest, taking it in turns to outdo each other in terms of points scored.

The final race of Stage 1 featured Gr. 3 cars, and took place at Interlagos.
Scibilia took pole position in his Lamborghini, with the stage leader Hizal (Subaru) starting in second place.
Most of the top drivers, including Scibilia in pole, opted to start the race on medium tyres, and the pack remained tightly clustered for the first few laps.

Hizal was clearly keen to overtake Scibilia and build up a lead as soon as possible, but couldn't find an opening that would allow him to slip into first place.

Hizal's moment came on the first corner of the fifth lap, when he cut inside Scibilia and successfully overtook him. He then remained in first place until the ninth lap, when the leading pack all took their first pit stop. Both Hizal and Scibilia switched from medium to hard tyres. This would allow them to switch to soft tyres at the next lap's mandatory tyre change.

While the top two were changing tyres, Honda's Gallo (Williams_Bracer) was able to take the lead. Gallo is a driver who's been excelling in the exhibition races, and it wouldn't be an exaggeration to say that he's the most improved driver overall. Right behind Gallo, and putting a lot of pressure on the leader, was Beauvois in his Mercedes-Benz. The two drivers fought a intense but clean battle, though their efforts would prove to be in vain.
As Gallo and Beauvois went in for their mandatory tyre change, Hizal and Scibilia, who had already completed theirs, were able to speed on by and reclaim the top two spots. Hizal went on to cross the finishing line in first place, completing an excellent victory, and claiming the stage for Subaru.

Special mention must also go to Renault Sport's PR1_JOSETE, who was unable to take part in the final race. He is another driver who, like Gallo, has shone in the exhibition races, and we expect to see big things from him in the future. The power balance may be shifting in the EMEA region!