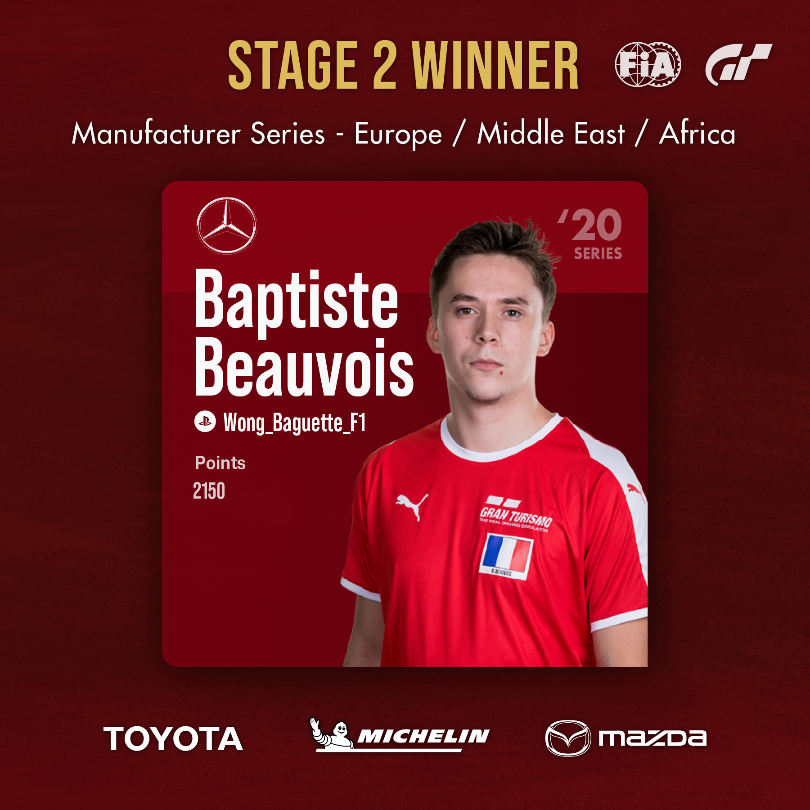 One of the stage's most notable performers was Honda's Gallo (Williams_BRacer), who entered every single race, pitting his wits against all comers and really growing in sharpness as a result. This goes to show how important it is that drivers continue to race against their regional rivals, even if they aren't able to pick up huge numbers of points in the process.
Gallo's best performance was on the Fuji Speedway in Round 18, where both his offensive and defensive driving on the final lap were nothing short of fantastic.

Mercedes-Benz's Beauvois (Wong_Baguette_F1), on the other hand, picked his battles carefully, but still earned enough points in rounds 11, 12, 14 and 15 to ensure he was at the top of the pile going into the final race.
Subaru's Hizal (TRL_MH16), who had won the first stage, did not appear in any of the races from Round 14 onwards, and was therefore unable to defend his crown.

The final race of Stage 2 took place on the Nürburgring's 24h layout, and featured Gr. 3 cars.

Gallo took pole position, with Aston Martin's Moysov (VQS_Nick) in second place and Toyota's Kevelham (HRG_RK23) in third. The stage leader Beauvois had to settle for fourth place on the grid. The leading pack had all opted to start on medium tyres, and soon built up a lead over the rest of the cars in the race.

On the first lap, Kevelham took advantage of Gallo's slipstream on the Döttinger Höhe straight, overtaking him and taking the lead heading into the home straight. Kevelham then managed to pick up the pace even further, building up a lead over his nearest rival. It seemed that he was keen to ensure that no one would be able to give him a taste of his own medicine on the Döttinger Höhe straight by using his own slipstream to overtake. The second placed Gallo had some tricks up his sleeve, however, and opted not to try and match Kevelham's pace in the early stages, preferring to conserve fuel instead.

On the final lap, all the leading pack took a pit stop at the same time. Kevelham's earlier pace-setting had used up a lot of fuel, meaning that his pit stop took a long time, and he dropped down to fourth.

Gallo was in the lead going into the Nordschleife, with Moysov, Beauvois and Kevelham hot on his heels, but he was soon able to build up a lead over the chasing pack.

As Gallo pulled away, the battle for second place intensified. Beauvois overtook Moysov on the approach to the Aremberg Corner, but Moysov is not the kind to give up easily, as anyone who's seen his performances for the eSports Team VANQUISH can attest.
The Döttinger Höhe straight is 2km long, meaning that drivers who wish to use a rival's slipstream in order to overtake them must pick their moment carefully. If they go too soon, they give the other driver enough time to use their slipstream to overtake them right back.
Alternatively, a driver could use their rival's slipstream to close the gap, then leave the stream only to rejoin it at the perfect moment, and this is what Moysov did. Beauvois did his best to shake him off, but his efforts were unsuccessful, and Moysov was able to move into second place.

The fierce battle for second was making life nice and easy for Gallo, who was able to pull off a perfect pole-to-win victory. Among those who were visibly impressed by this magnificent performance was Honda's Sugimori (s-shohei_), one of the Asia region's top drivers.

Despite Gallo's performance in the final race, however, Mercedes-Benz's Beauvois had racked up enough points in previous rounds to emerge as the overall winner of Stage 2. It would be wrong to call this a dominant victory, however, and things are likely to be tighter still in future stages.