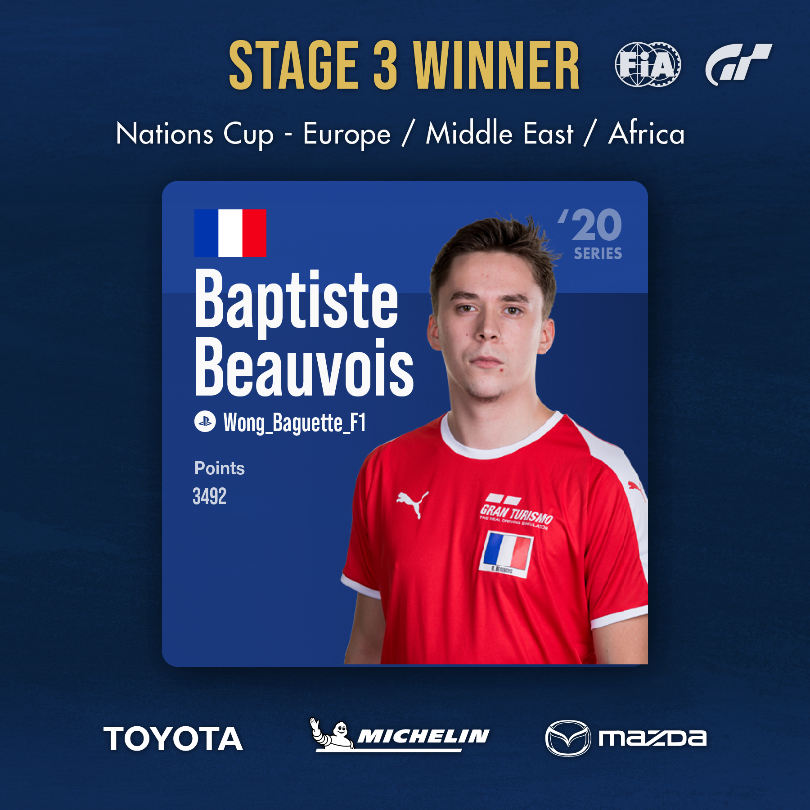 Stage 2 had ended with France's Beauvois (Wong_Baguette_F1) leading the way—just as he had at the end of the second stage of the Manufacturer Series. Another similarity with the Manufacturer Series was the fact that Italy's Gallo (Williams_BRacer) was hot on his heels. The showdown between France and Italy was certainly proving to be the main attraction in the EMEA region.

Beauvois was relentless throughout the stage, top-scoring with over 400 points in Rounds 23, 24 and 28. Gallo also performed well, picking up points in Rounds 21, 23 and 24, but he could not keep up with Beauvois, and the latter's lead at the top grew larger.

Round 27 took place on Special Stage Route X, and was notable for being the first time that a series race had taken place on an oval track. Both Beauvois and Gallo took part, but despite their best efforts the top two drivers could not manage much more than 100 points each. It was a stark reminder of the thrilling unpredictability of oval track racing.

The race got off to a dramatic beginning, with Beauvois completely messing up the start with a major wheelspin and immediately dropping down to fourth. This allowed Gallo to start putting some daylight between himself and the chasing pack.

Beauvois had fallen down to fourth place, but by the second lap he was back up to second, albeit with the third-place Mangano snapping at his heels.

The leading pack all took a pit stop on the fourth lap, with Gallo alone opting to switch to hard tyres. This allowed Beauvois, who had switched to medium tyres, to gradually claw back some of Gallo's 1.5 second lead.
On the ninth lap, Gallo switched to medium tyres, thus completing his mandatory tyre changes. Unfortunately, however, it was a pit stop that saw him fall down to seventh place.

Beauvois and Mangano were now in a straight fight for first position, with the pair of them enjoying a huge three second lead over the rest of the field.

Both Beauvois and Mangano took a pit stop on the 14th lap, switching to hard and soft tyres respectively.
By this point, Gallo had managed to climb up to fifth place, and he opted to take third pit stop. This saw him drop down to seventh again, but it did mean he could finish the race on soft tyres, giving himself a significant speed advantage.

On the 16th lap, Beauvois switched from hard to soft tyres. This would prove to be a tactical error, as the pit stop saw him drop down to third place, with Gallo sailing past into second. By this point, Mangano had a seven second lead.

On the final lap, Mangano switched to hard tyres in order to complete his mandatory tyre changes. This allowed Gallo to finally take the lead for the first time. It also allowed Beauvois to move back into second place.

Gallo crossed the finish line 1.6 seconds ahead of his nearest rival. It was a brilliant tactical performance, his decision to make his mandatory switch to hard tyres early on proving decisive in the end, providing the foundation for a well deserved victory.

It wasn't enough to unseat Beauvois from the top of the overall leaderboard, however. The Frenchman held on to first place to be crowned the 2020 Nations Cup champion for the EMEA region.