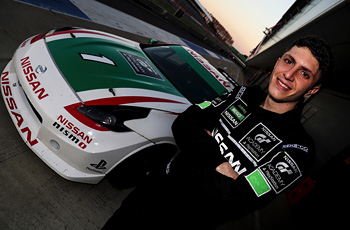 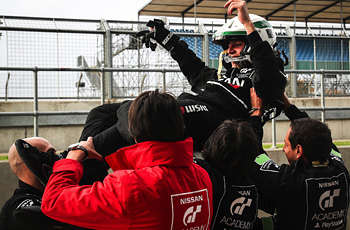 Johnny Guindi made his dreams come true at 2016 GT Academy Race Camp, as he triumphed above 35 other worldwide competitors to win a place on Nissan’s comprehensive Driver Development Programme (DDP) and a race seat at the 2017 24 Hours of Dubai.

However, it could have been so different for Johnny. While driving and go-karting were keen hobbies of his, he unfortunately didn’t have the money to progress further and it looked as if this dream would unfortunately come to a shuddering halt.

This would all change after entering a 2016 GT Academy Live Event in his native Mexico City. Johnny had been honing his skills on Gran Turismo for over three years, and his determination and willingness to learn meant he was quickly able to adapt to the pre-release version of Gran Turismo Sport on the PlayStation®4.

After proving his virtual racing credentials, Johnny progressed to the Mexico National Final at the country’s F1 circuit, Autódromo Hermanos Rodríguez, where he impressed across all disciplines to secure one of six Mexican places at Race Camp.

Over a gruelling eight days in the UK, Johnny once again showcased his remarkable adaptability throughout, as competitors from Mexico, Australia, Thailand, Indonesia, Philippines and North Africa were put to the test in a range of cars on different terrains.

Mentored by countryman and 2014 winner Ricardo Sanchez, Johnny impressed the judges with his willingness to learn and his ability to take on and apply advice given to him. For the first time in 2016, the final race was contested by two finalists from each nation, with Johnny and teammate Enrique Rodriguez starting pole position after winning the Stock Car Racing two days previously.

At the end of Enrique’s stint, the Mexican team pitted from second place while the leading North Africa team stayed out. Johnny was on the pace immediately, setting the fastest lap of the race within three laps of jumping into the car. His strong pace meant that when the North African car made their driver changeover, Johnny had wiped out a near five second deficit and emerged just in front as they left the pits.

With six laps remaining, Johnny still had a lot to do to hang onto the lead. However, watched by the attending Mike Carcamo, director of Nissan Motorsport, he maintained a gap superbly to take the chequered flag and later be declared the winner of 2016 GT Academy.


Johnny had a whirlwind start to his DDP and took part in his first race the following weekend, as he works towards competing in the 2017 24 Hours of Dubai in January. There, he will form an all GT Academy driver line-up in the Nissan 370Z GT4 alongside previous winners Ricardo Sanchez, Romain Sarazin and Jann Mardenborough.