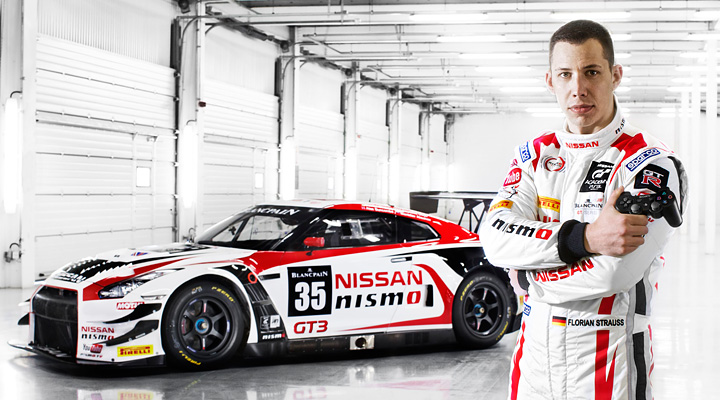 Florian Strauss was working as a car rental manager when he took part in GT Academy Germany in 2013. Over 99,000 PlayStation®3 gamers had entered the gamer-to-racer competition, and Florian saw them off to become the next German NISMO Athlete, racing professionally for Nissan.

Born and bred in Berlin, Germany, Florian first picked up Gran Turismo 2 when he was a young boy and he hasn’t stopped enjoying the Gran Turismo series ever since. He dreamed of being a racing driver for over ten years, and so he relished the chance to have his PlayStation hobby become the catalyst to his motorsport dreams coming true.

Florian is keen on sport, fitness, cycling and karting – the perfect hobbies for a racing driver! Before GT Academy, Florian had no motor racing experience. He had been karting for fun and attended two track days but had not set foot in a race car before attending Race Camp in September 2013.

Having impressed head judge Nick Heidfeld with his performance throughout Race Camp, Florian was crowned the winner and has since completed an intensive Driver Development Programme, developing the skills needed to compete with the best international drivers out on the track. In January 2014, Florian and his fellow 2013 GT Academy winners took a dominant class victory at the Dubai 24 Hours. Florian has gone on to race a Nissan GT-R GT3 in the Blancpain Endurance Series in 2014.