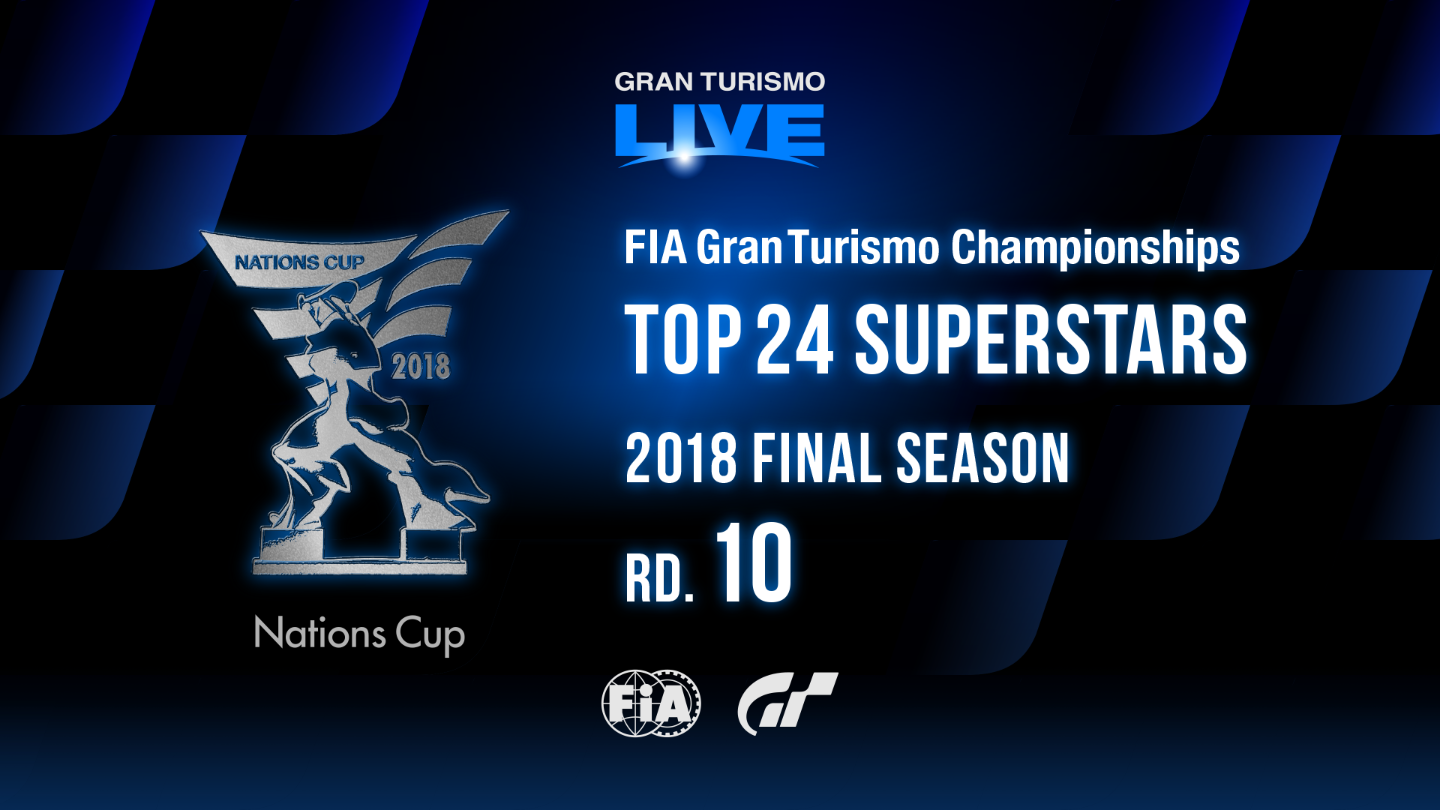 The final Top 24 Superstars event of Season 3 presented competitors in the FIA Gran Turismo Nations Cup with their final chance to score big bonus points and book their place in the live final for the Americas Region. After ten rounds, it was all down to this final race at the Le Mans circuit to see who would advance. Less than 700 points separated Chile’s FT_NicoR, Brazil’s IOF_RACING17 and Canada’s Deafsun96 before the green flag dropped.

The fifteen-minute qualifying session saw plenty of drama as the Group 1 cars, which took about three minutes to get around the 38-corner Le Mans track, made many mistakes and were subjected to huge penalties. GumballCGT (USA) emerged as the early leader, but it didn't last as championship leader FT_NicoR pushed his Peugeot 908 HDi around the 13.629-km track in 3:21.965 to take pole position. 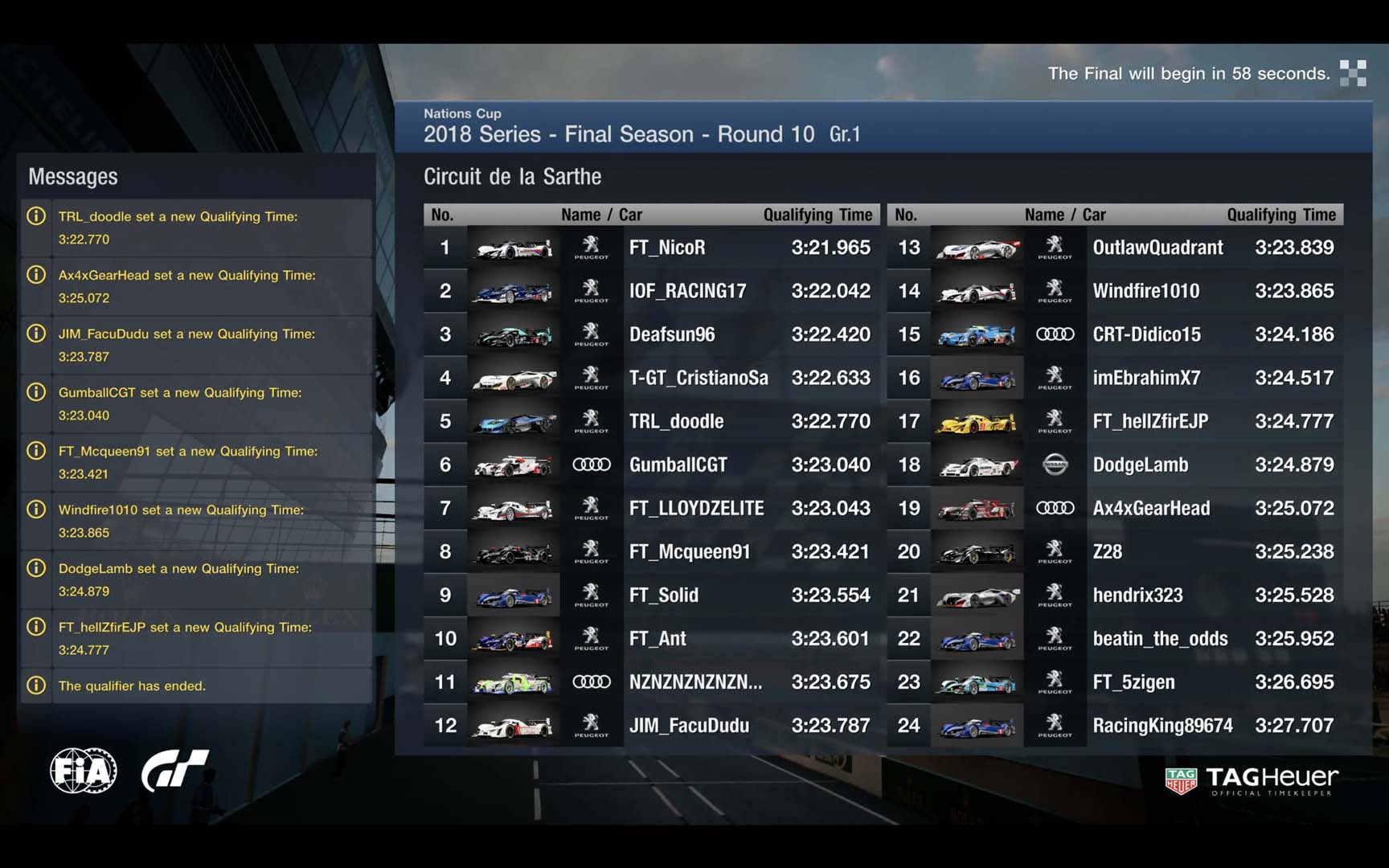 With less than a half-second separating the top three positions, it was evident that this was going to be an exciting race. FT_NicoR played the rolling start perfectly, as he maintained his lead into the first corner. Making a move at the start was the Brazilian, IOF_RACING17, who made a quick pass to take a firm hold of 2nd place. Then the unthinkable happened, as another Brazilian driver, T-GT_CristianoSa, didn't brake properly for a corner and forced both IOF_RACING17 and FT_NicoR off the track. Once FT_NicoR got back onto the track, his bad luck continued as he was once again forced off a few corners later. And just like that, the two front runners, FT_NicoR and IOF_RACING17, found themselves outside of the top 15. 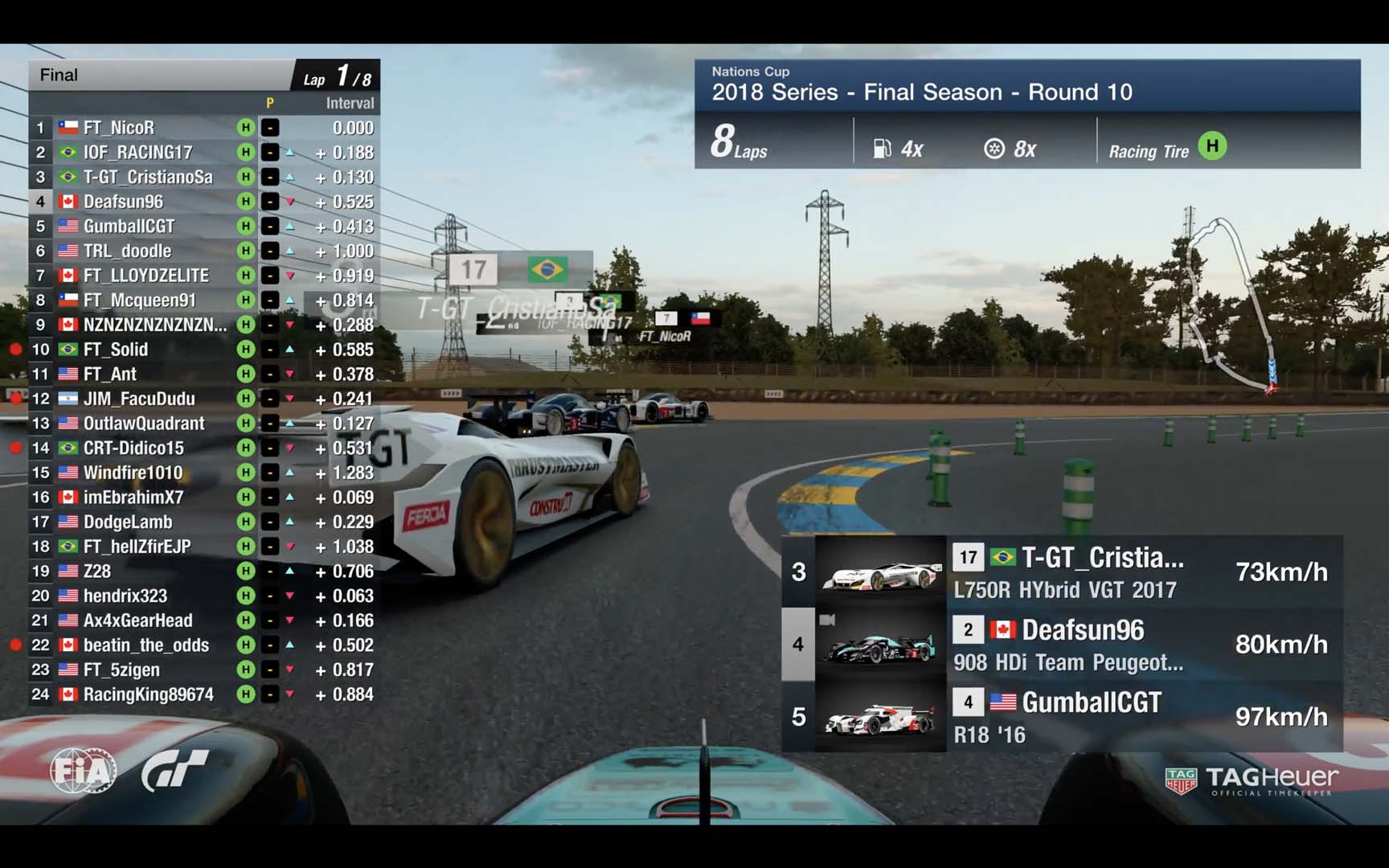 Deafsun96 took advantage of the chaos to grab the lead ahead of the American GumballCGT. Now all Deafsun96 had to do was keep his position to take the overall lead of the Nations Cup, but GumballCGT did not intend to make it easy for him. The American pushed his Audi around the famous French circuit to keep within a second of the leader.

As the battle for the lead ensued, there was plenty of wheel-to-wheel action in the middle positions, as different cars showed their strengths and weaknesses on different parts of the track. Maintaining a good rhythm was DodgeLamb, running in the Nissan, but both NZNZNZNZNZNZNZNZ and JIM_FacuDudu were constantly on his rear bumper. 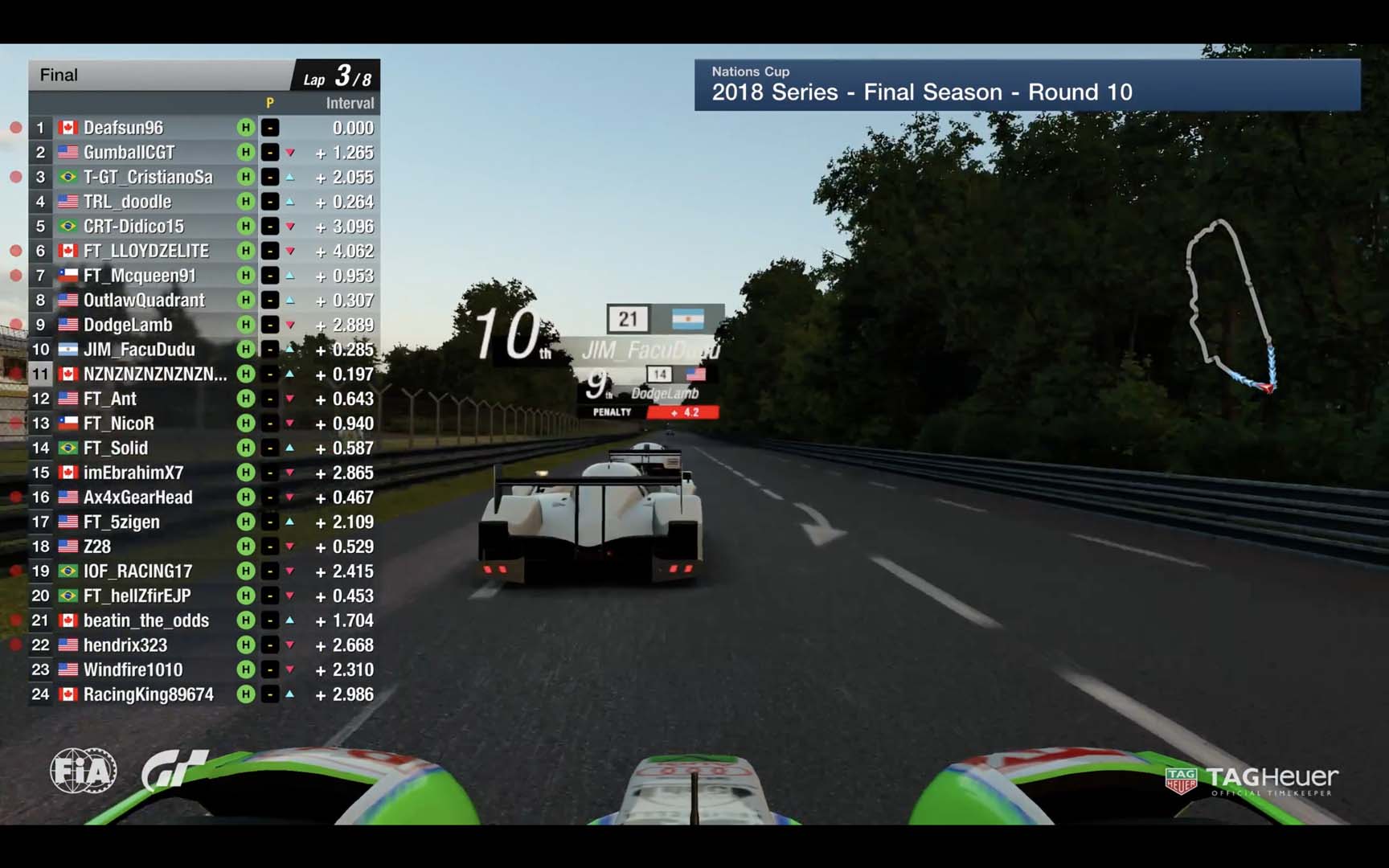 After the nightmarish opening lap, FT_NicoR tried to move up the leader board, as the determined Chilean made it to 11th place by the end of Lap 4, which would see a number of racers jump into the pits. The first to go in was the race leader Deafsun96, while GumballCGT elected to stay out and maintain a 14-second lead over FT_LLOYDZELITE. Once Deafsun96 came back out onto the track, armed with fresh tires, he quickly worked his way up the field...until a fatal mistake caused his car to spin off the track. Once the dust settled, he found himself way back in 15th place. 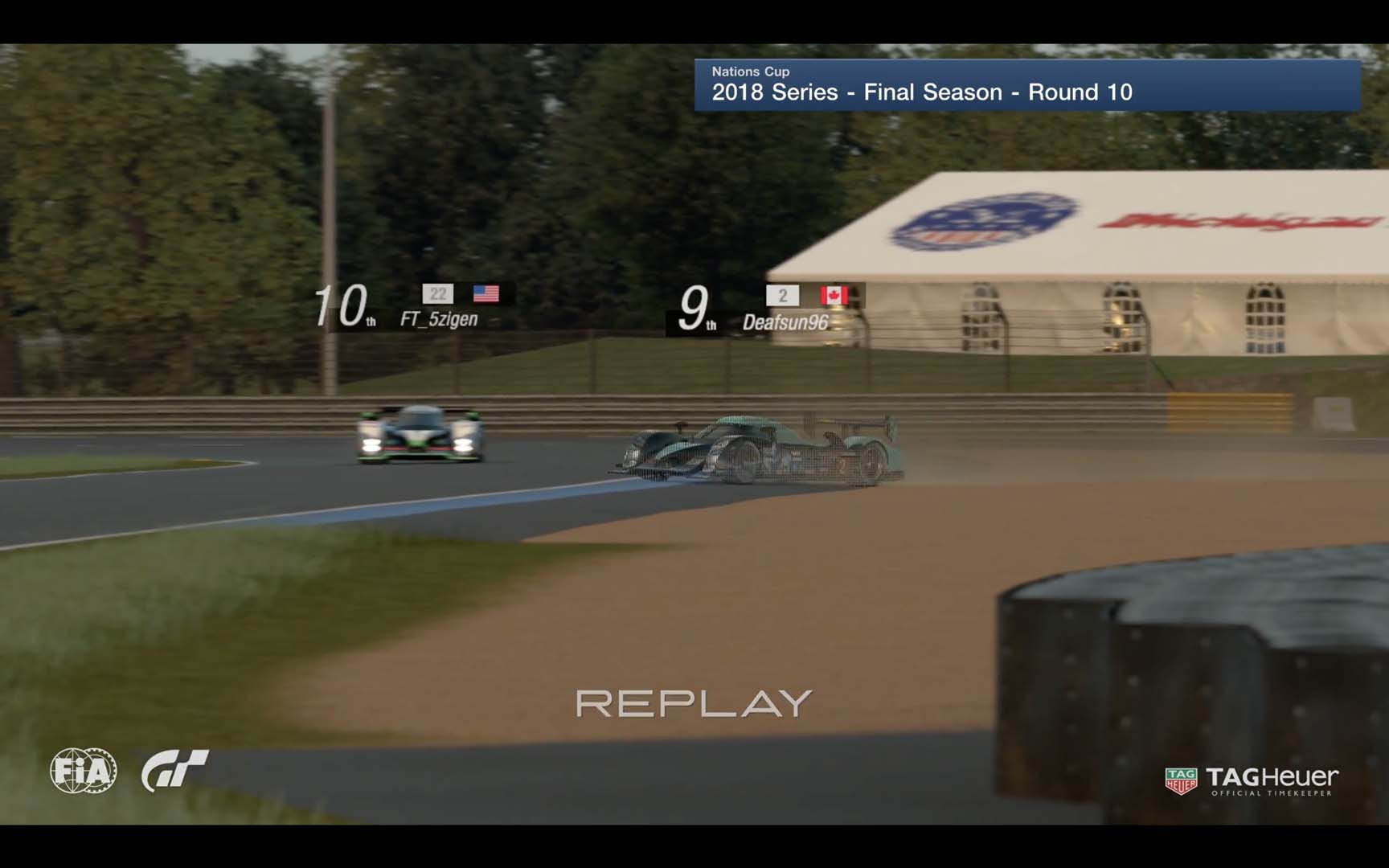 Once GumballCGT pitted, FT_LLOYDZELITE took the lead, but that lead slowly shrank as OutlawQuadrant closed in. Amazingly, FT_NicoR was also in hot pursuit, making it all the way back from the back of the pack. In fact, the Championship leader had a real chance to win, but ultimately working his way up the field had taken a toll on him and his car, as he went wide on a turn and allowed GumballCGT to pass him. But FT_NicoR didn't go away, keeping the pressure on the top three drivers. Then, at last, his luck had finally ran out as he made a crucial mistake through the chicane and fell back, his hopes of a podium finish, gone. 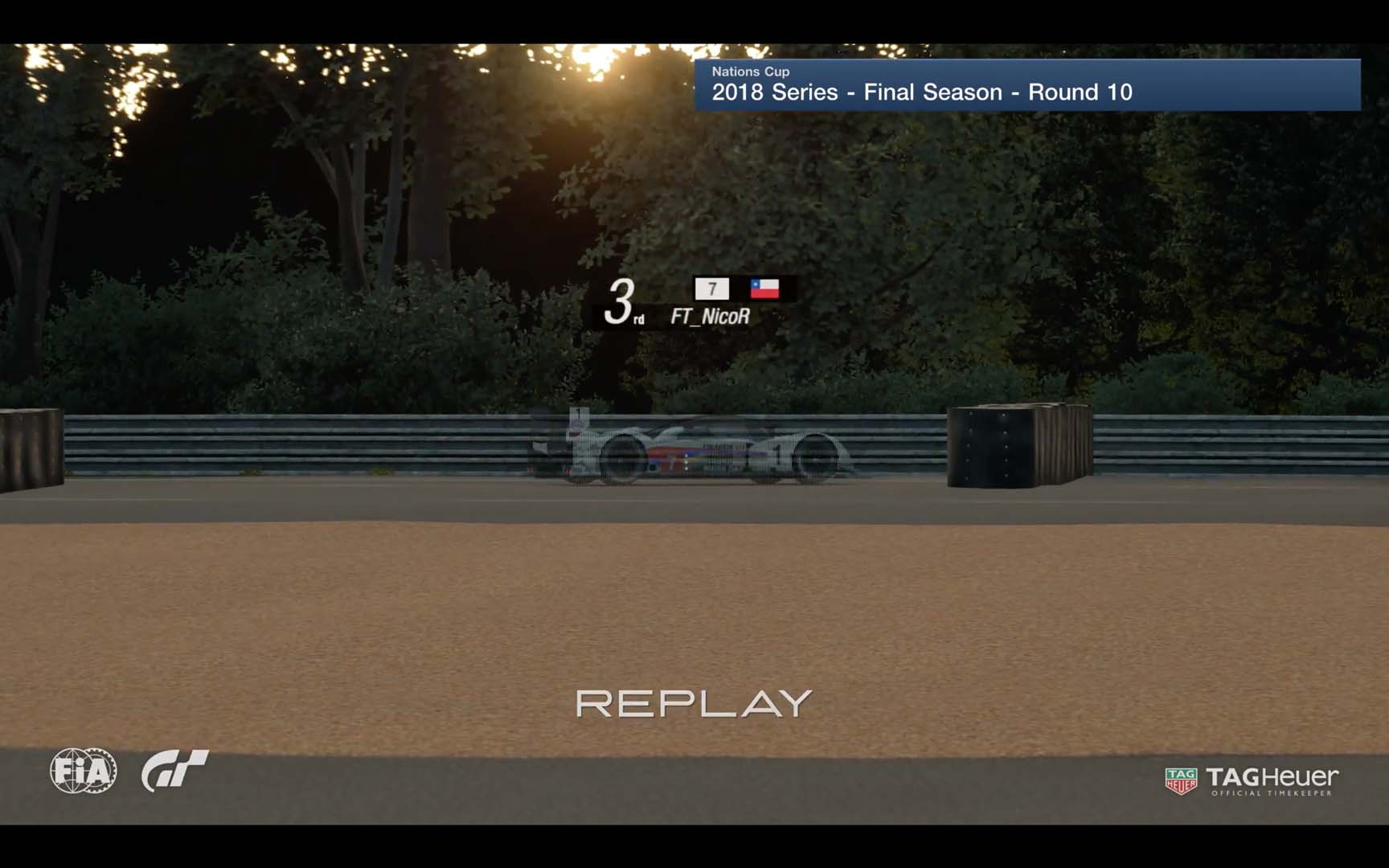 With fresher tires, GumballCGT’s Audi sped around the track as he gradually reeled in FT_LLOYDZELITE’s Peugeot. The two flew down the front straight together for the final and fateful lap. It was then that we all noticed that TRL_doodle was making his move, as he passed FT_Mcqueen91 and was gaining on the race leaders.

All eyes were on TRL_doodle as he worked his way to within a half-second of GumballCGT with half a lap left. The American driver was doing his best to get close enough for a pass, braking late in corners and taking as agressive a line as possible. It wasn't easy for GumballCGT to hold him off, but hold him off he did, taking the checkered flag, crossing the line a mere 0.275s ahead TRL_doodle. 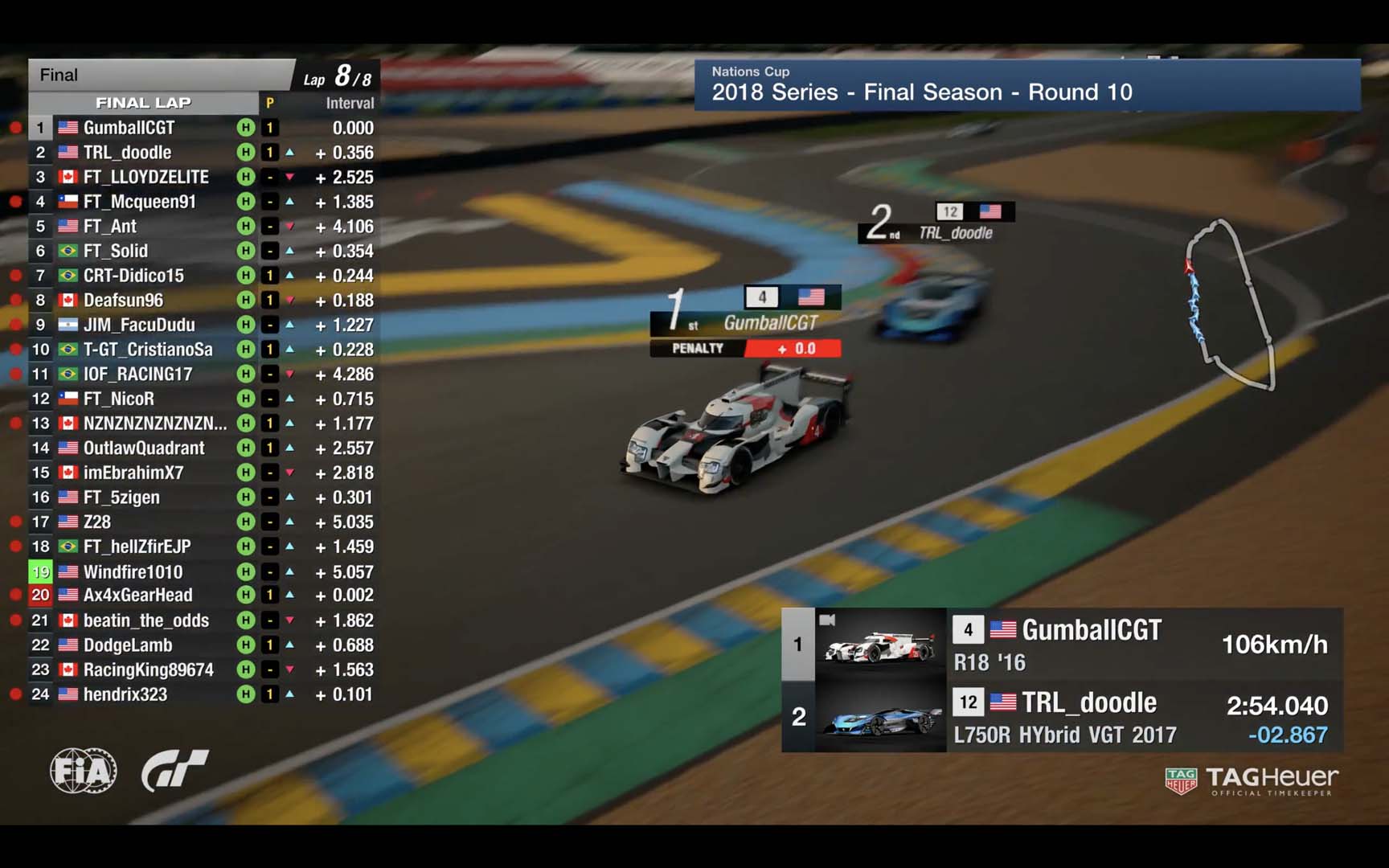 FT_LLOYDZELITE’s no stop strategy paid off with a 3rd-place finish, three seconds behind the winner. 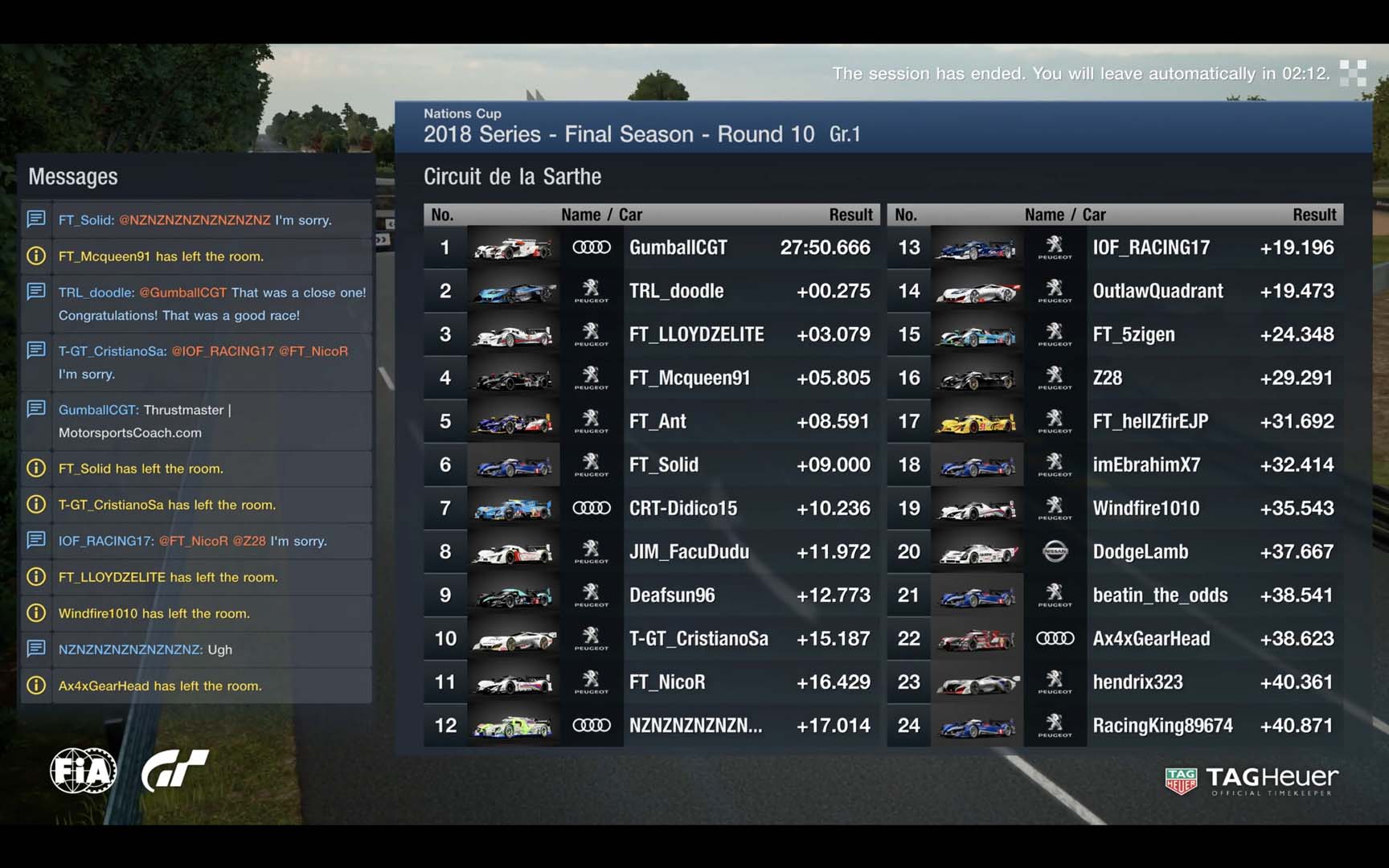 Now all that is left is to see who will attend the Nations Cup Americas Regional Final in October. Can FT_NicoR come back from his nightmarish race here? We will see next month!