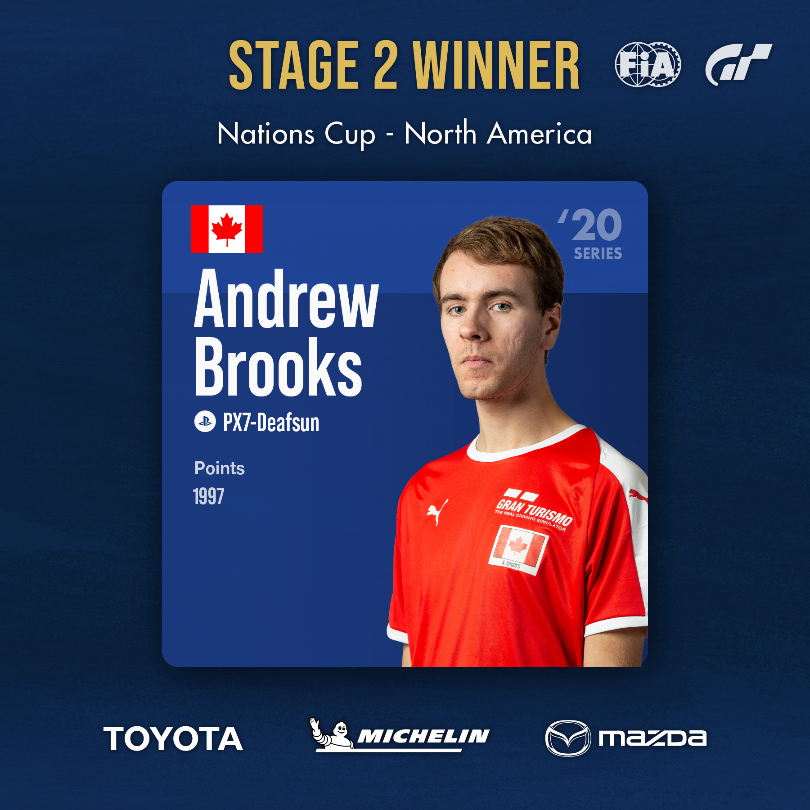 The second stage of the 2020 Nations Cup got underway on July 4.

Many drivers, including the winner of the first stage, Canada's Andrew Brooks (PX7-Deafsun), decided not to enter any races before Round 16. Another Canadian, Jeff Gallan (R8G_LLOYDZELITE), took a different approach, however. Making his racing comeback in the 2020 series after a lengthy absence, he was clearly keen to participate in as many races as possible.
This approach paid off handsomely as he stormed to an impressive victory in Round 16, claiming 435 points in the process and closing in on the top of the leaderboard.

The final race of Stage 2 was a one-make race on the Circuit de Sainte-Croix-C . All the contestants piloted the F1500T-A. Brooks took pole position, with his fellow Canadian Gallan in P2 and the USA's Daniel Solis (PX7-Lamb), who had finished 3rd in Stage 1, immediately behind him.

Solis took off like a rocket, overtaking Gallan on the first corner to move into 2nd place. Things got even better for him soon afterwards, as he got to the inside of Brooks on the third turn to take the lead.

All the while, a series of accidents occurred mid-pack, resulting in several penalties, which allowed the drivers in the top three positions to break away.

On the third lap, the race leaders dove into the pits and returned to the track without losing a place.

Because each driver were required to use three tire types at least once, they would need to make at least two pit stops. In the North America region, most drivers opted to pit stop times, a strategy that allowed them to use the soft-compound tires, the fastest around the track, twice. Among those taking this strategy was Gallan, but it didn't end up working out, as Solis, who led from the fist lap, held on to his position for the duration of the ten-lap race.

While Solis won the race, Brooks is winning the war, as he sits the top of the series leaderboard. His consistent scoring in both stages ensured that he ended Stage 2 on top of the pile.