Tokyo, Japan (October 3, 2021) – After an action-packed first half of the 2021 FIA Certified Gran Turismo Championships, things picked up right where they left off in the Manufacturer Series with the third-round event held at the world-famous Red Bull Ring. Going into the second half of the Series, Mazda led the way among the 12 teams, with Toyota only a point behind, thanks to their impressive showing in the World Series Showdown in August. While it seemed that it was going to come down to these two teams, the results of Round 3 showed us that the winner of the series is still far from being decided. 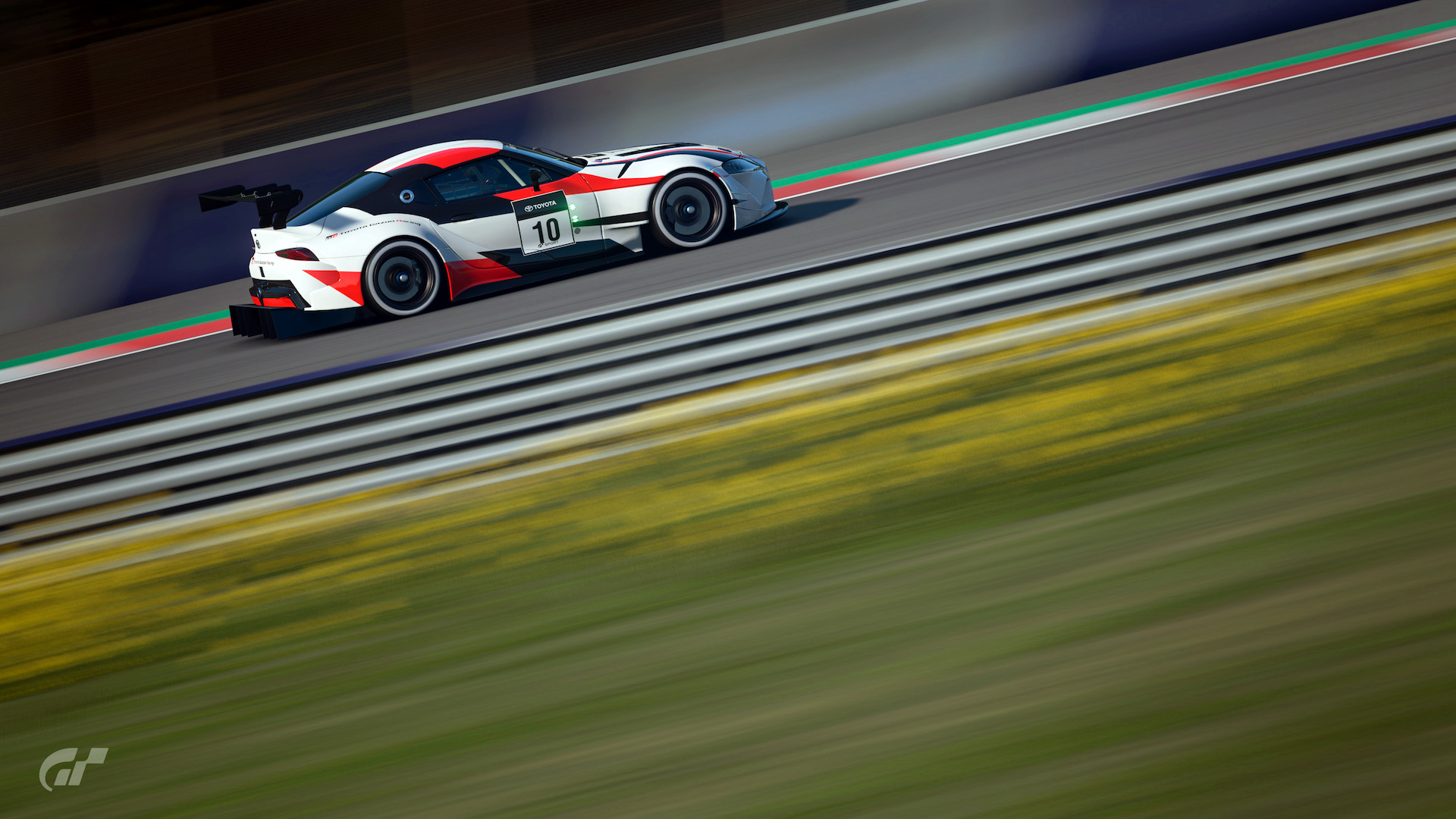 The second half of the 2021 Series kicked off with a 20-lap contest around the famous Red Bull Ring in Spielberg, Austria, known to be among the fastest race circuits in the world. Porsche claimed pole position with Spaniard Jose Serrano (PR1_JOSETE) behind the wheel of the 911 RSR, registering an impressive time of 1:28.688 in qualifying. He was joined on the front row by Igor Fraga of Brazil (IOF_RACING17), the 2018 Nations Cup champion, in the Toyota GR Supra Racing Concept. In contrast to the experienced Brazilian, newcomers to the World Series occupied row 2 in the form of Japan’s Yuhki Araki (DW-yuhki02) in the Dodge Viper SRT GT3-R and Belgian Quinten Jehoul (ERM_Quinten) piloting the Peugeot RCZ.

An interesting rule for this race meant that all cars would need to pit at least once, but they would not necessarily need to change tires. However, with the hard compound Michelin tires, the only ones available for the contest, being effective for about 10 laps, going the entire race distance on one set would be next to impossible.

The rolling-start saw most of the cars get cleanly through Turn 1, with Serrano’s Porsche 911 leading the way. World Series Showdown Nations Cup champ, Ryota Kokubun of Japan, who had endured a poor qualifying by his standards, nearly had his race end early when his Mazda RX-Vision GT3 went off track, but he managed to gather it back up and rejoin the race dead last in 12th place. The cars then settled quickly into formation as they took the first two laps of the race in mostly single-file formation. 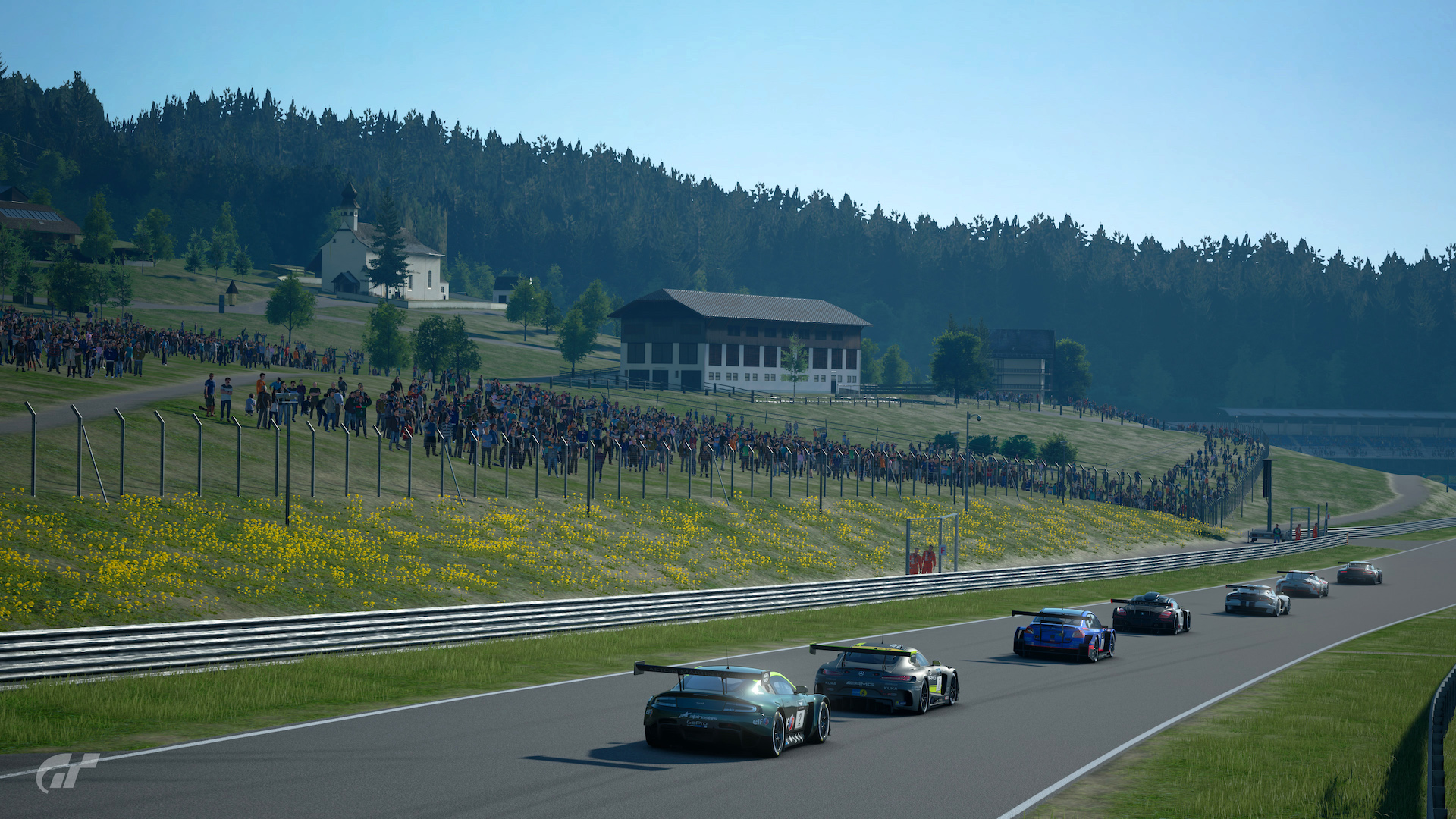 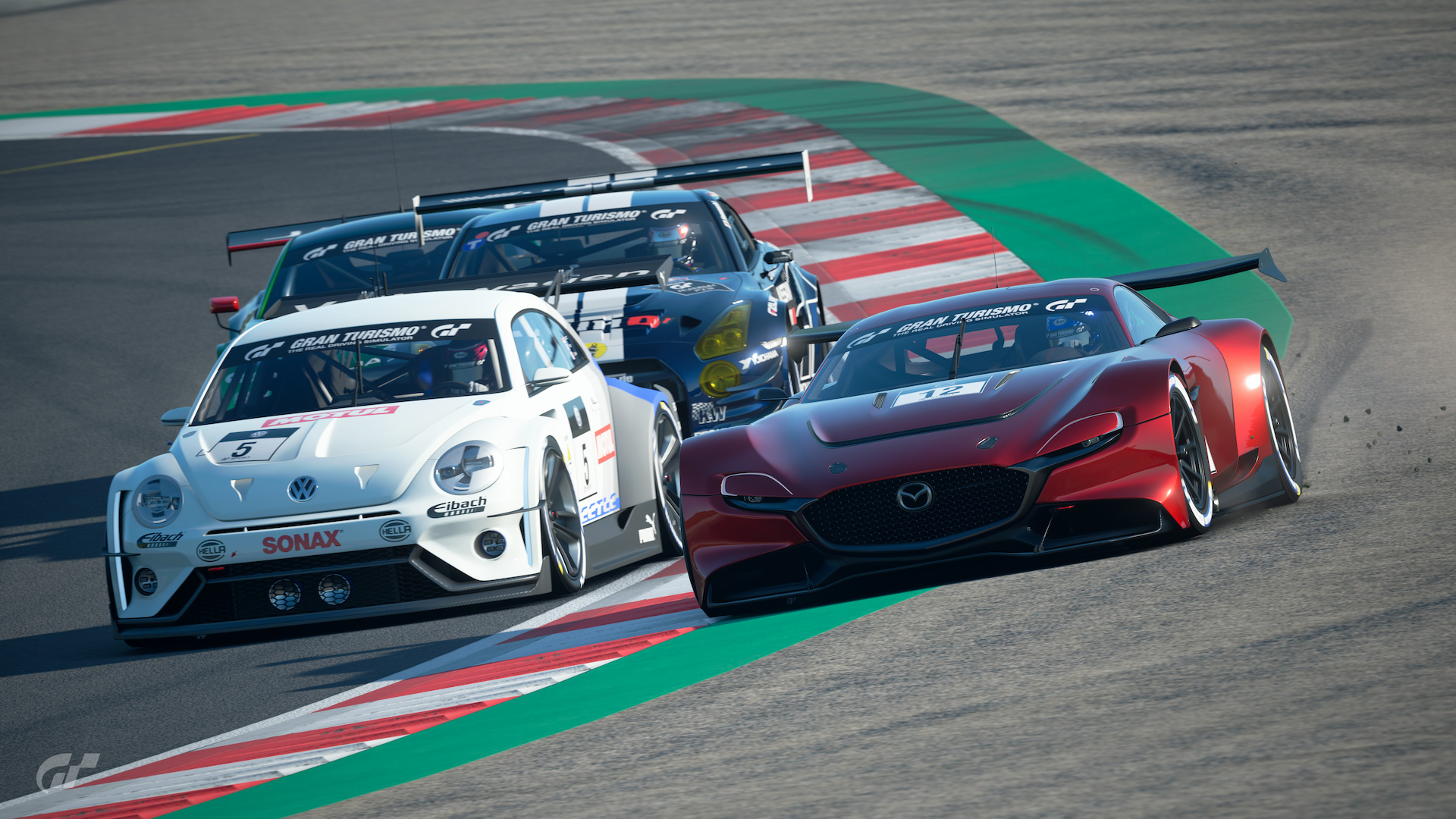 On lap 3, Araki in the Dodge Viper applied tremendous pressure on the Toyota Supra of Fraga, the 2018 Nations Cup champion, looking to get by. All this while Araki himself was feeling the heat from the 18-year-old Jehoul in the Peugeot RCZ. But the running order of the top five cars remained unchanged until lap 7 when Fraga went after race-leader Serrano through Turn 1. When he saw that he couldn’t pass, Fraga backed off, which presented an opportunity for Araki to slide his Viper past the Supra into 2nd place. 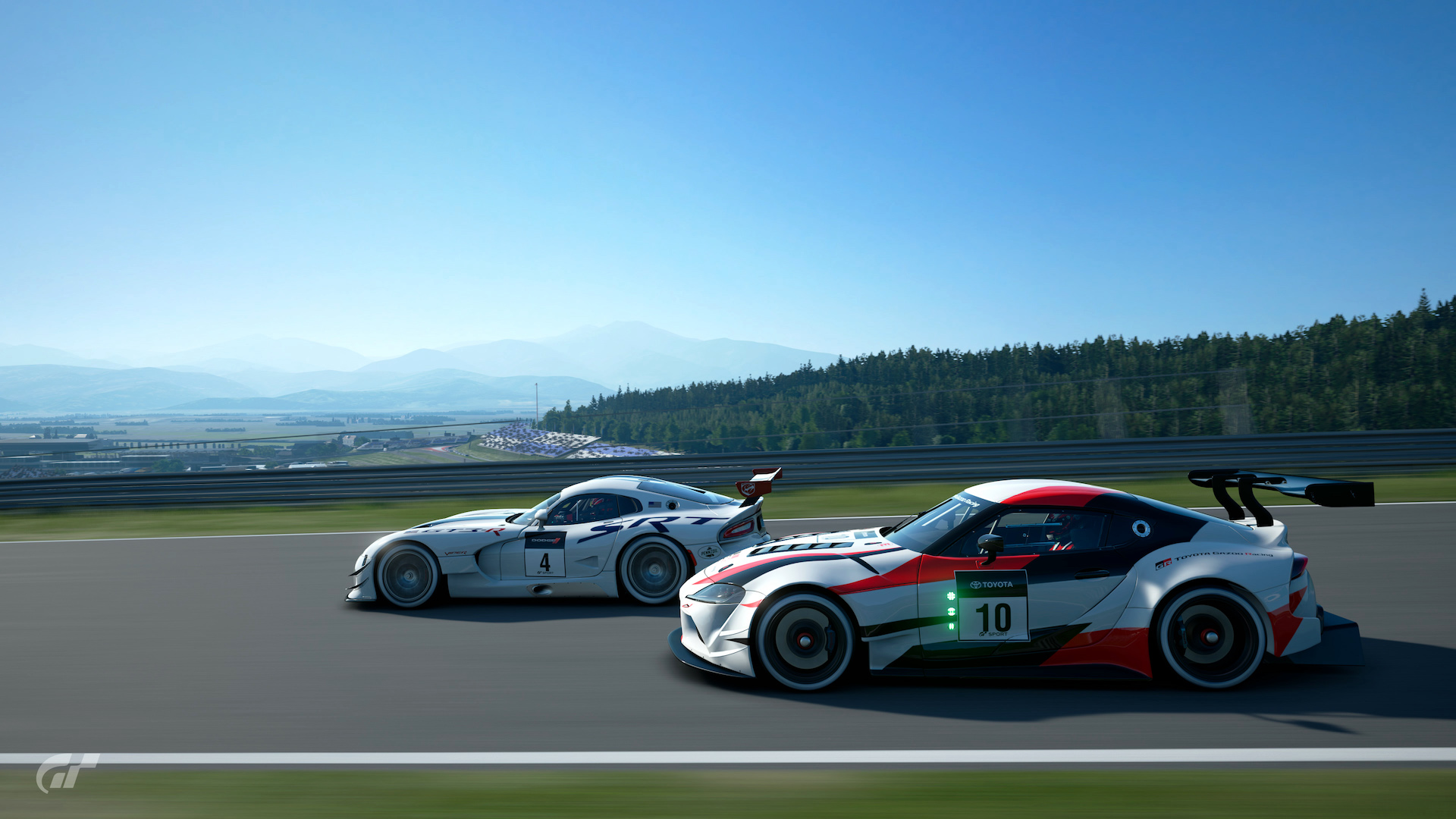 The next lap saw Fraga of Team Toyota, Jehoul of Team Peugeot, and 2020 Nations Cup champion Takuma Miyazono of Japan (Kerokkuma_ej20) driving the Subaru WRX, all make their pitstops. Race-leader Serrano came in the following lap, handing the overall lead temporarily to Araki and the Dodge Viper, who, on lap 9, was the only driver who had yet to pit. He finally did so the following lap with a 16-second lead, which proved just enough to rejoin the race back in front, but by only a tenth of a second. 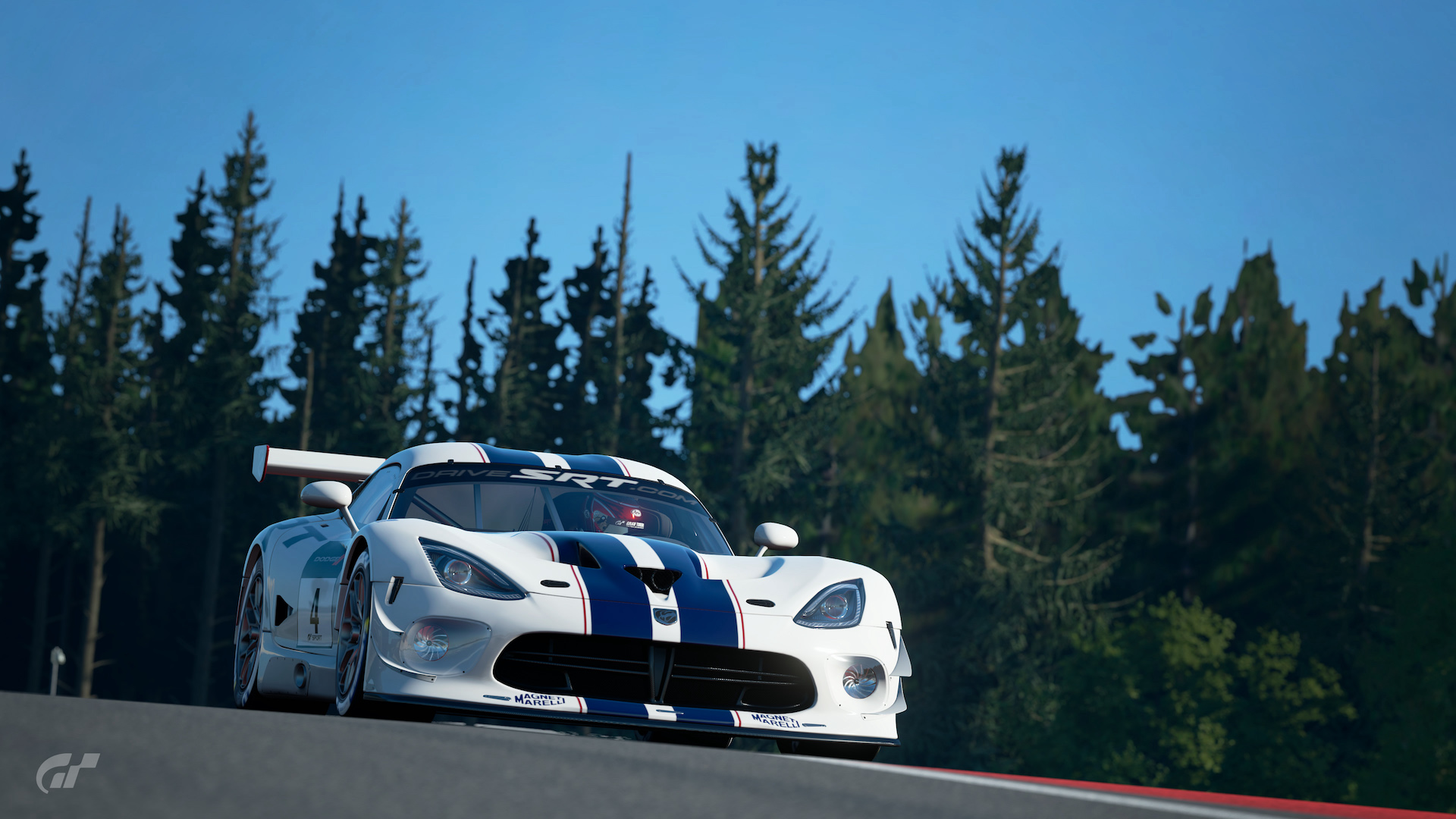 Immediately, Fraga and Serrano charged right up to the Viper’s rear bumper, as Araki did all he could to defend his position through Turn 1. Unlike the first half of the race where the drivers seemed to be overly cautious, they were now laying it all on the line, running side by side and aggressively looking to get past the car in front of them. Fraga got held up between several cars and dropped to P4 while Serrano in the Porsche 911 reclaimed the lead. With only a half second separating P1 and P5, it was now a five-horse race with any one of the top five cars able to claim the checkered flag. 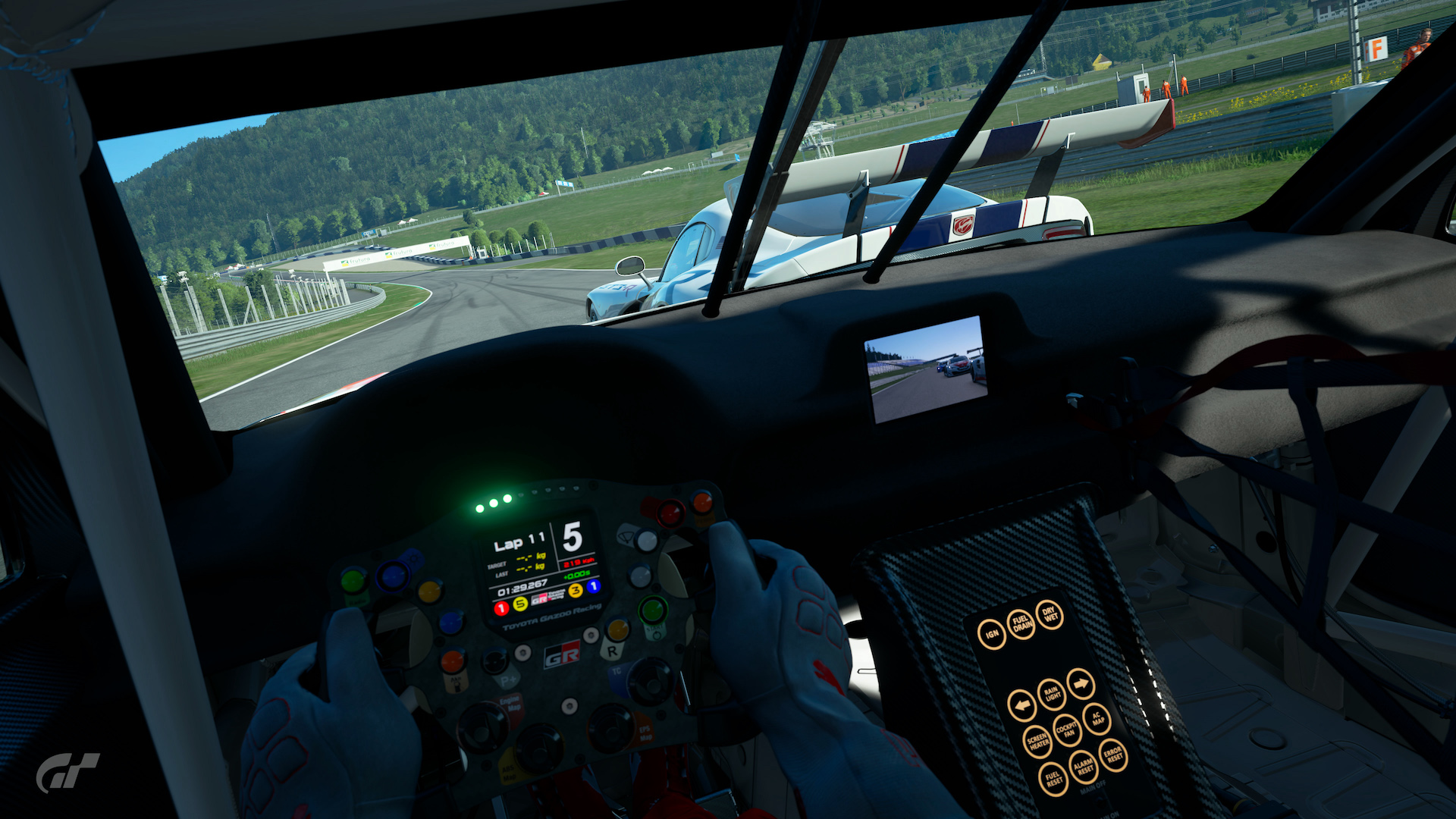 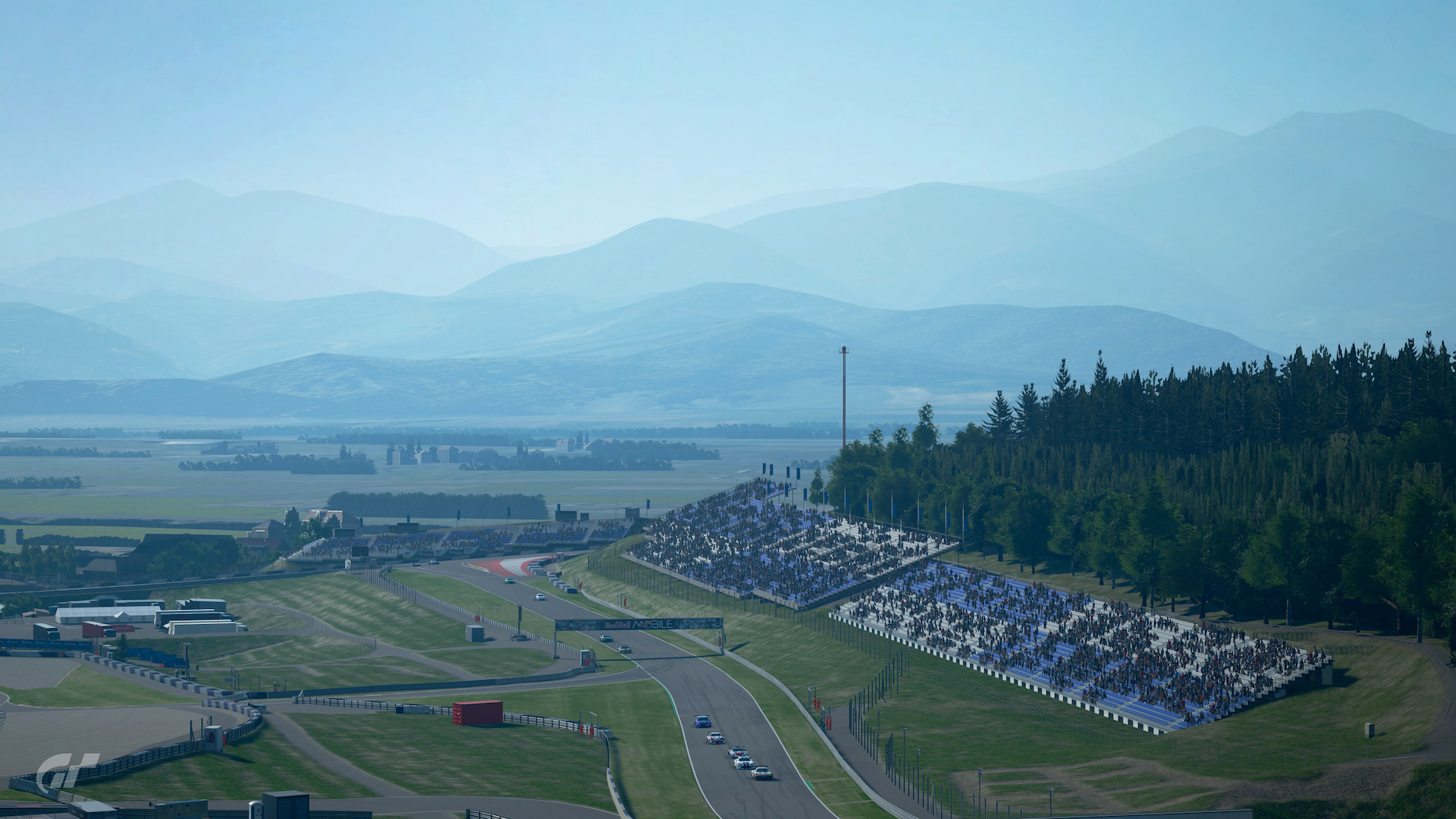 As the cars reached 240 km/h on the front straight, Jehoul out-braked Araki on lap 13 going into Turn 1, moving past the Dodge on the inside to take over P2. With five laps to go, the running order for the top five cars was: Porsche (Serrano), Peugeot (Jehoul), Dodge (Araki), Toyota (Fraga) and Subaru (Miyazono). On a track where passing was difficult, everyone expected the race to finish in this order until the unimaginable happened: Fraga’s pace inexplicably slowed, falling more than a second behind the 3rd-place RCZ of Jehoul. Then, to compound his problems, he was assessed a half-second penalty for track limits. Miyazono in the Subaru WRX passed while he served the penalty and then France’s Baptiste Beauvois (R8G_TSUTSU) in the Mercedes-Benz AMG GT3 and Peru’s Alonso Regalado (TX3_Jara) in the Aston Martin V12 Vantage GT3 also managed to capitalize on the Brazilian’s loss of momentum. 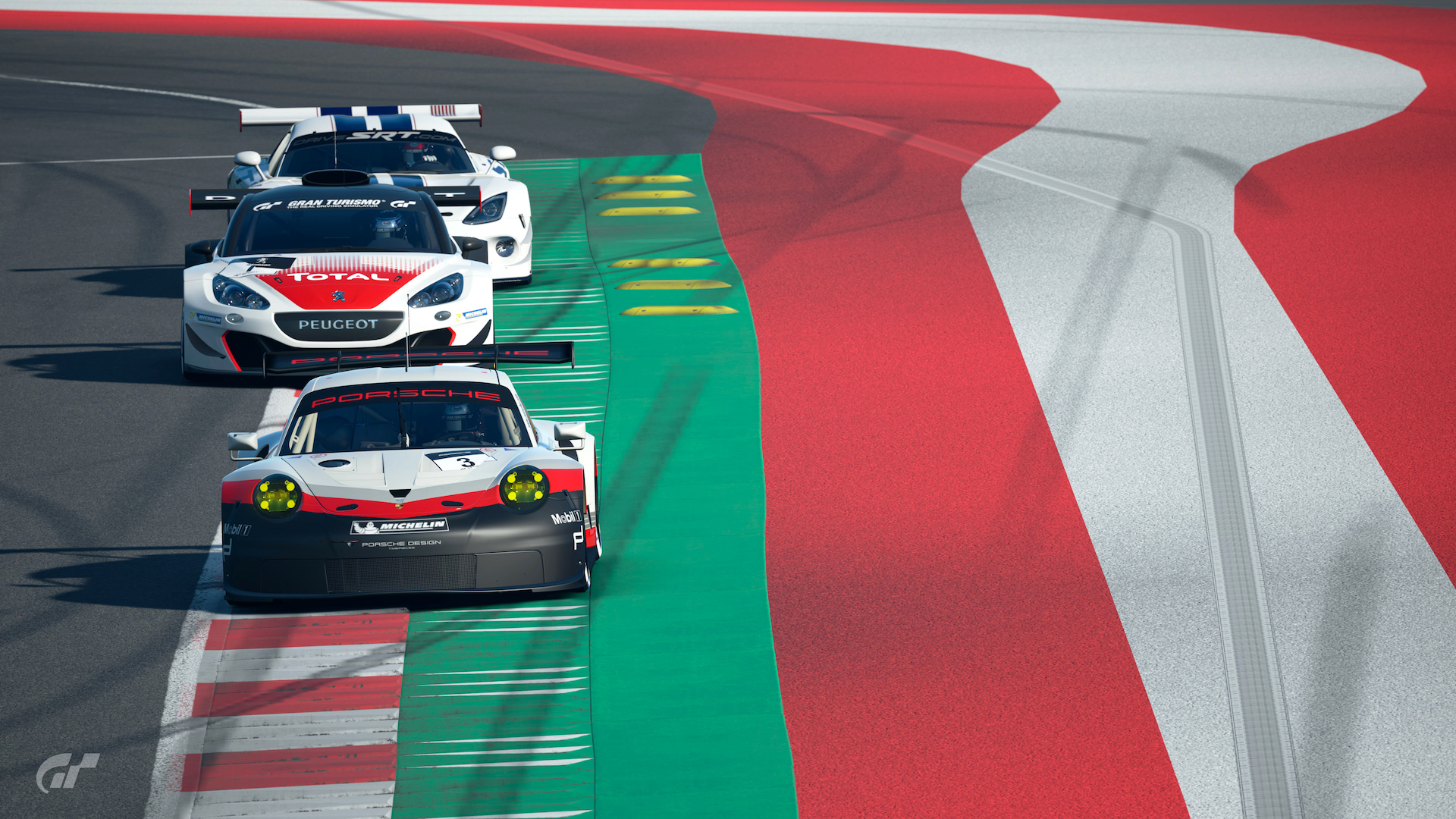 Lap 18 saw Araki’s Dodge Viper overtake Jehoul’s Peugeot RCZ. The Japanese driver was charging like a wild bull, getting his car sideways and making numerous overtaking attempts to get by Serrano. At Schlossgold (Turn 3), he got too aggressive and ended up scrubbing off speed, allowing Jehoul to get past him. In the end, it was Jose Serrano who held on for the race win, scoring three points for Porsche, while the impressive Quinten Jehoul brought his Peugeot RCZ in 2nd place. Despite finishing 3rd, Yuhki Araki’s competitive driving style certainly won him, and Dodge, a new legion of fans. 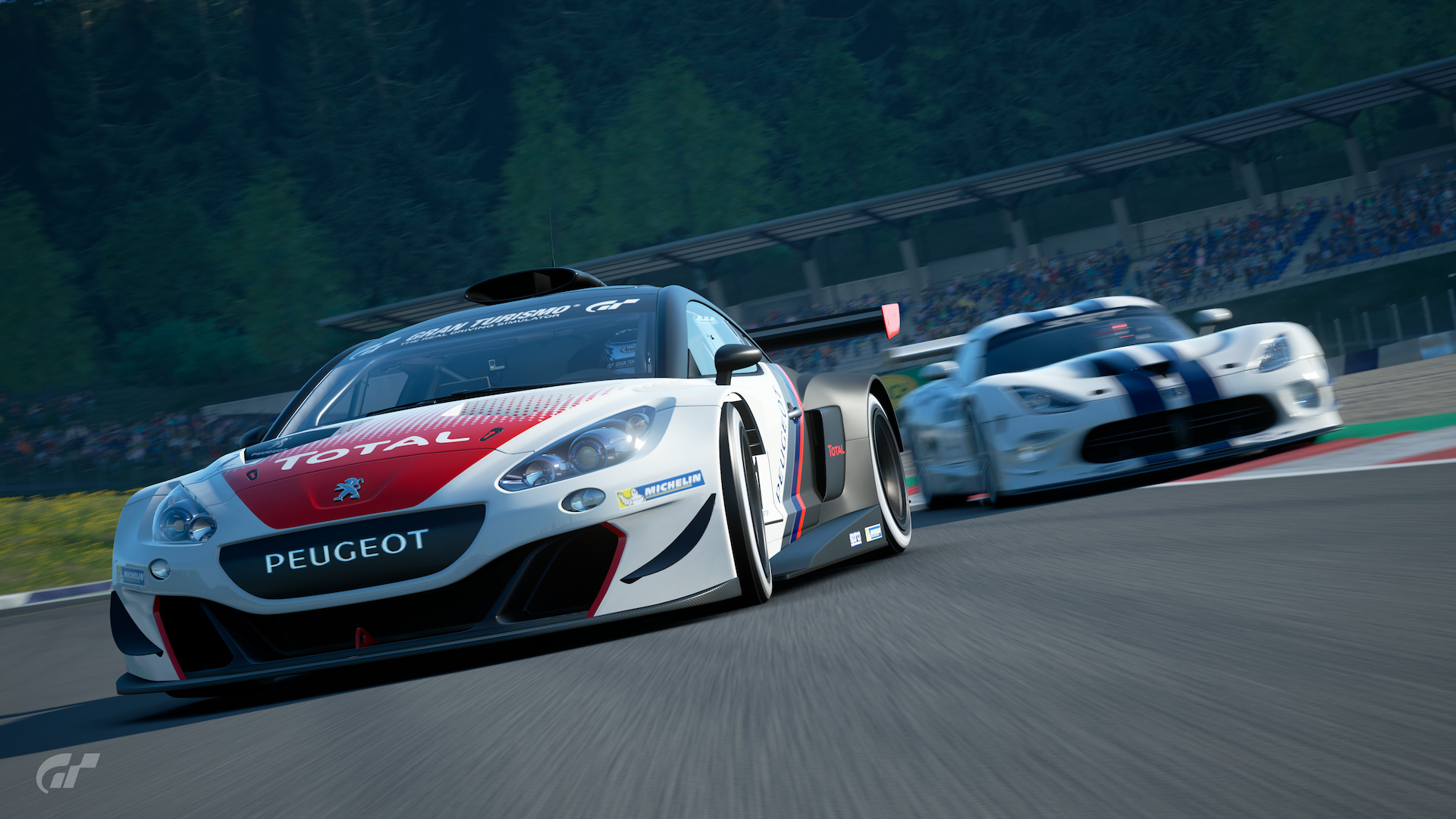 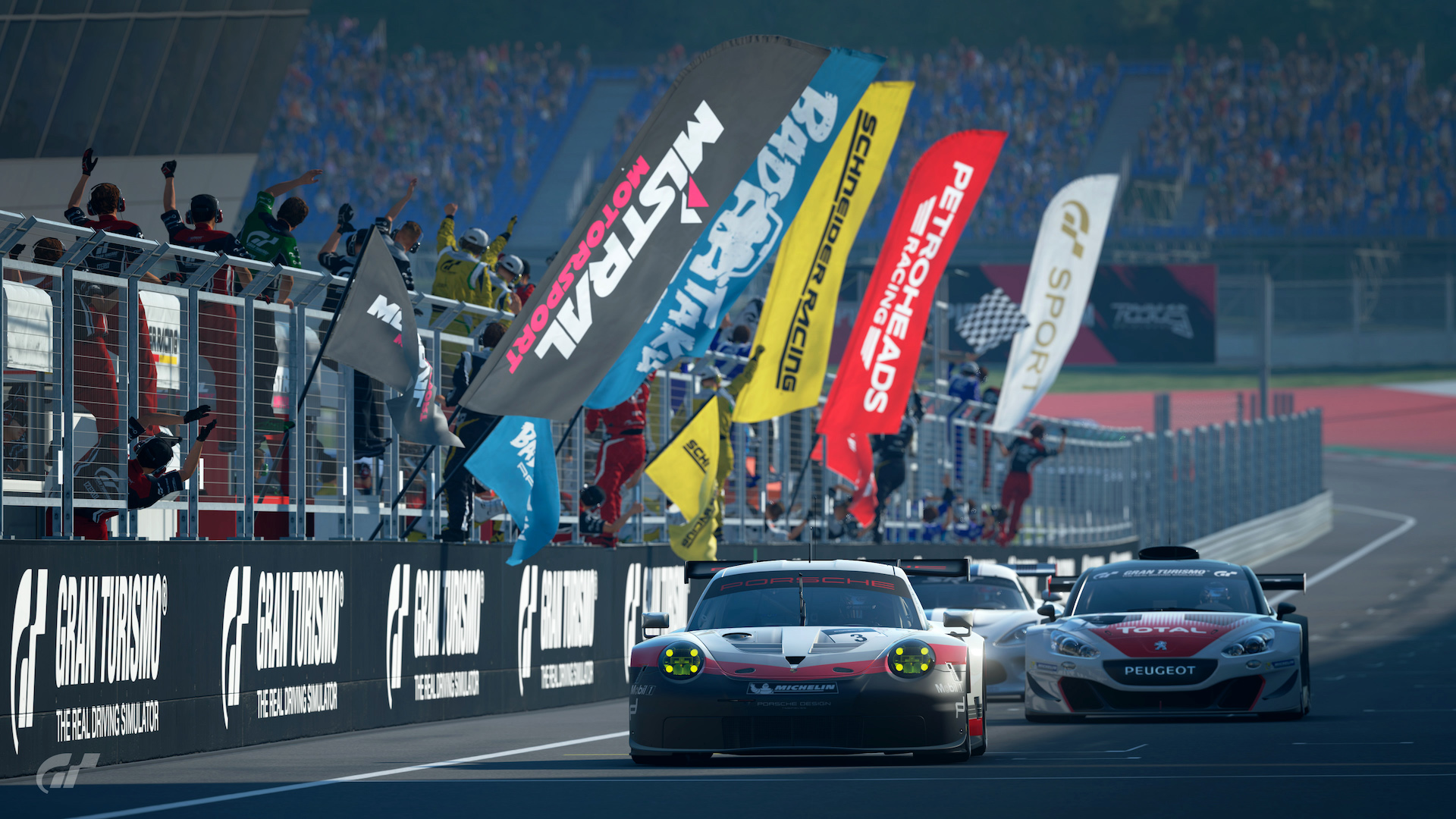 Despite Kokubun’s disastrous showing in Round 3, Mazda remain in the lead of the World Series points table with 11 points, followed by the 10 points of Toyota and Peugeot. With the win, Porsche moved into 6th place, still very much in the hunt with one World Series round to go before the World Finals in December.
Jose Serrano said after the race: “I’m on cloud nine now. The combo of the Porsche and the Red Bull Ring was really good for us. It’s a track where you need a lot of traction and the Porsche felt very stable. At the beginning of the race, I tried to pull away, but when Igor (Fraga) tried to overtake me, I knew I had to keep my position and drive within myself. I was successfully able to defend at the end, and everything turned out well.” 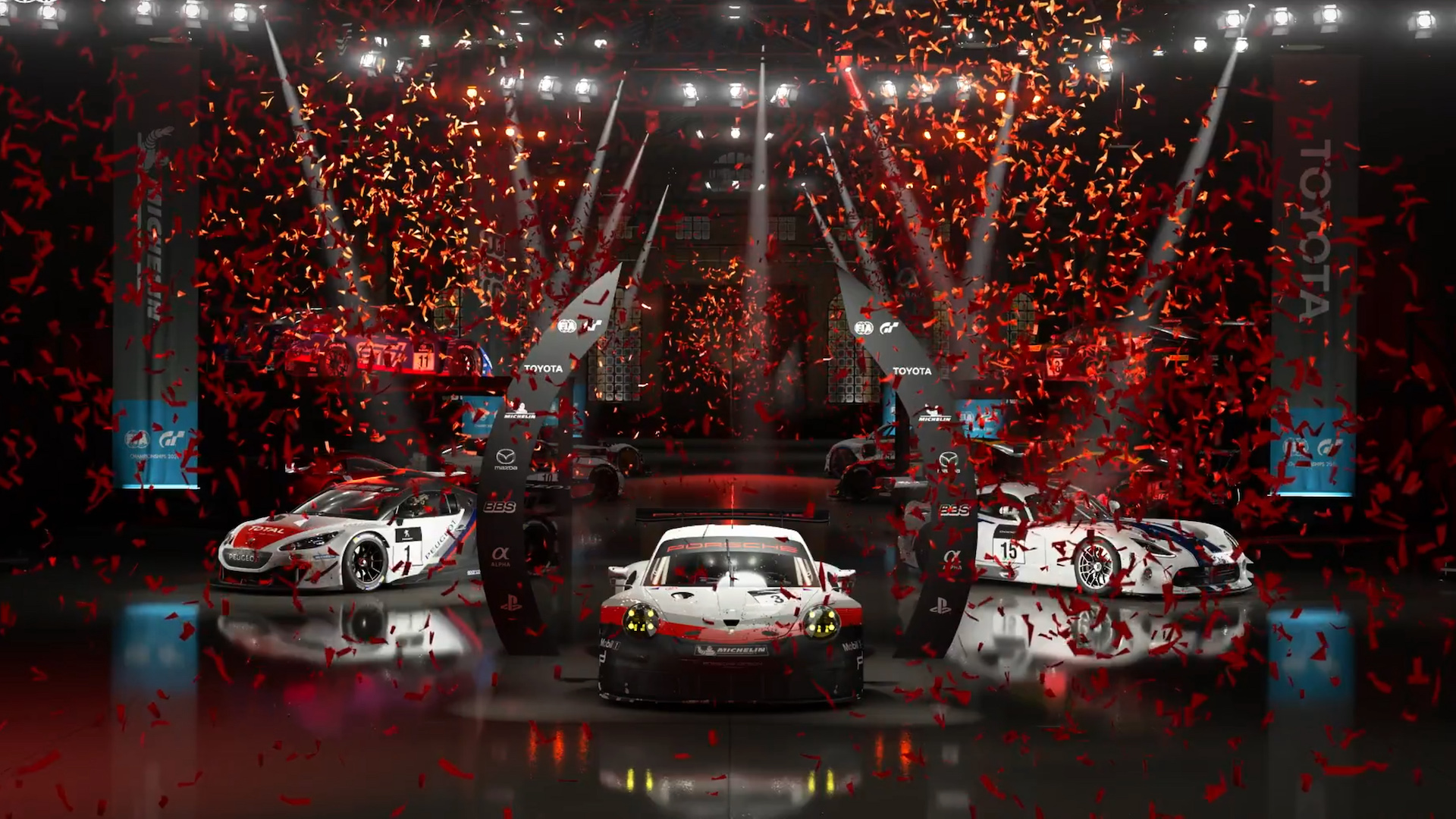 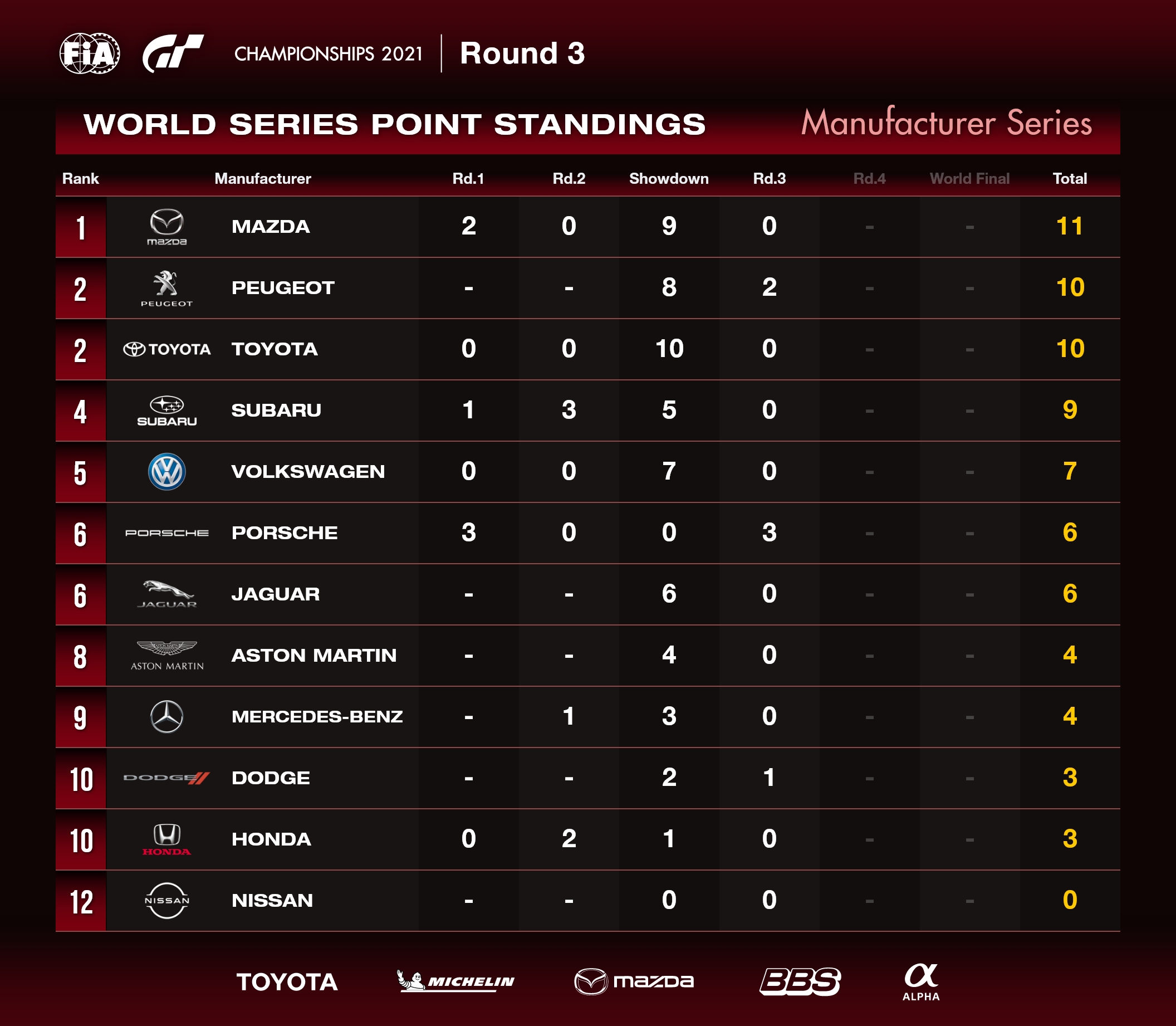