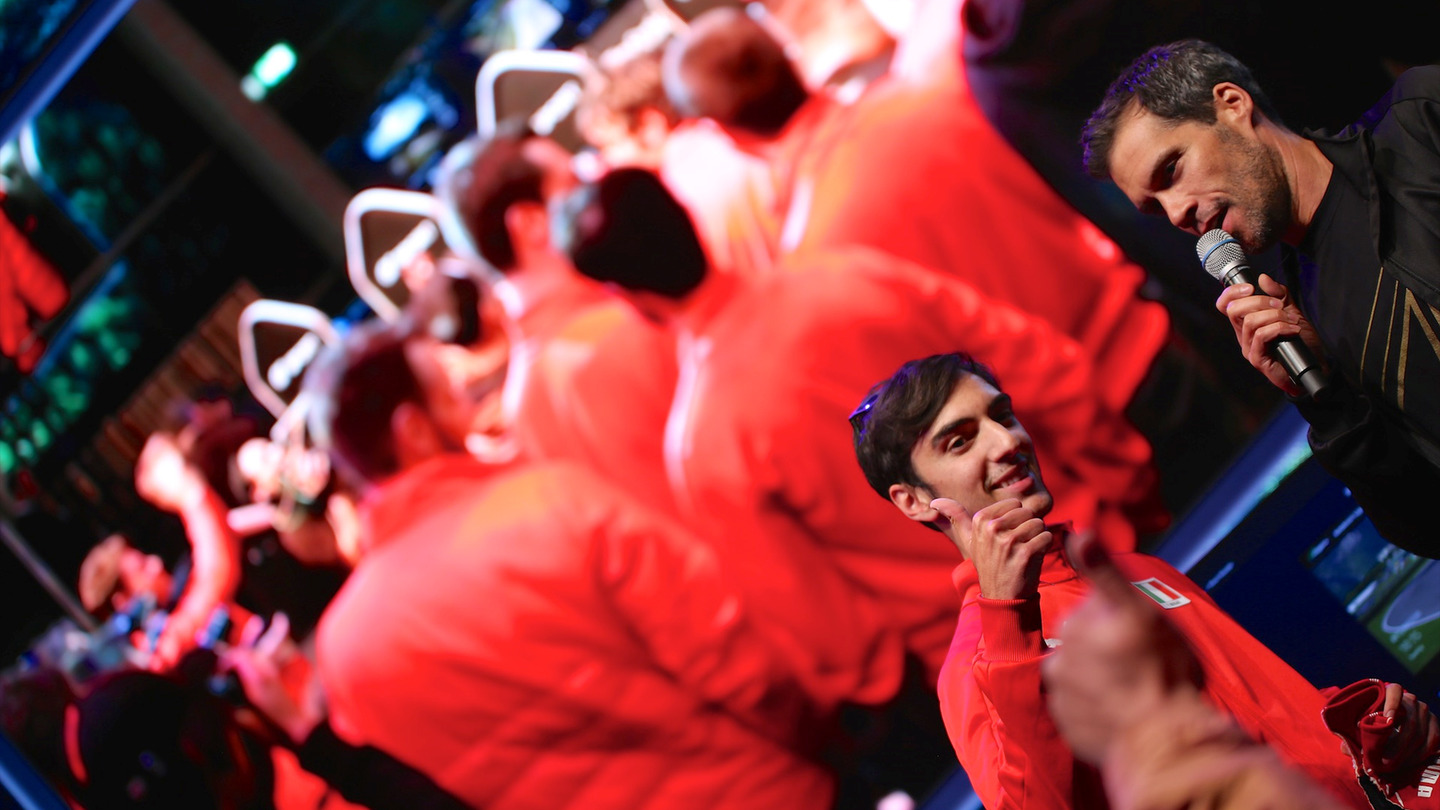 Race 3 was staged at the high speed Monza Circuit, in a 10 lap race with Gr.1 cars. In the rolling start from Parabolica, Blazan in pole position (Porsche 919 Hybrid) took off to a good start. Kaisla (Toyota TS050) immediately made a move lining up with Blazan, but Blazan managed to keep the lead. 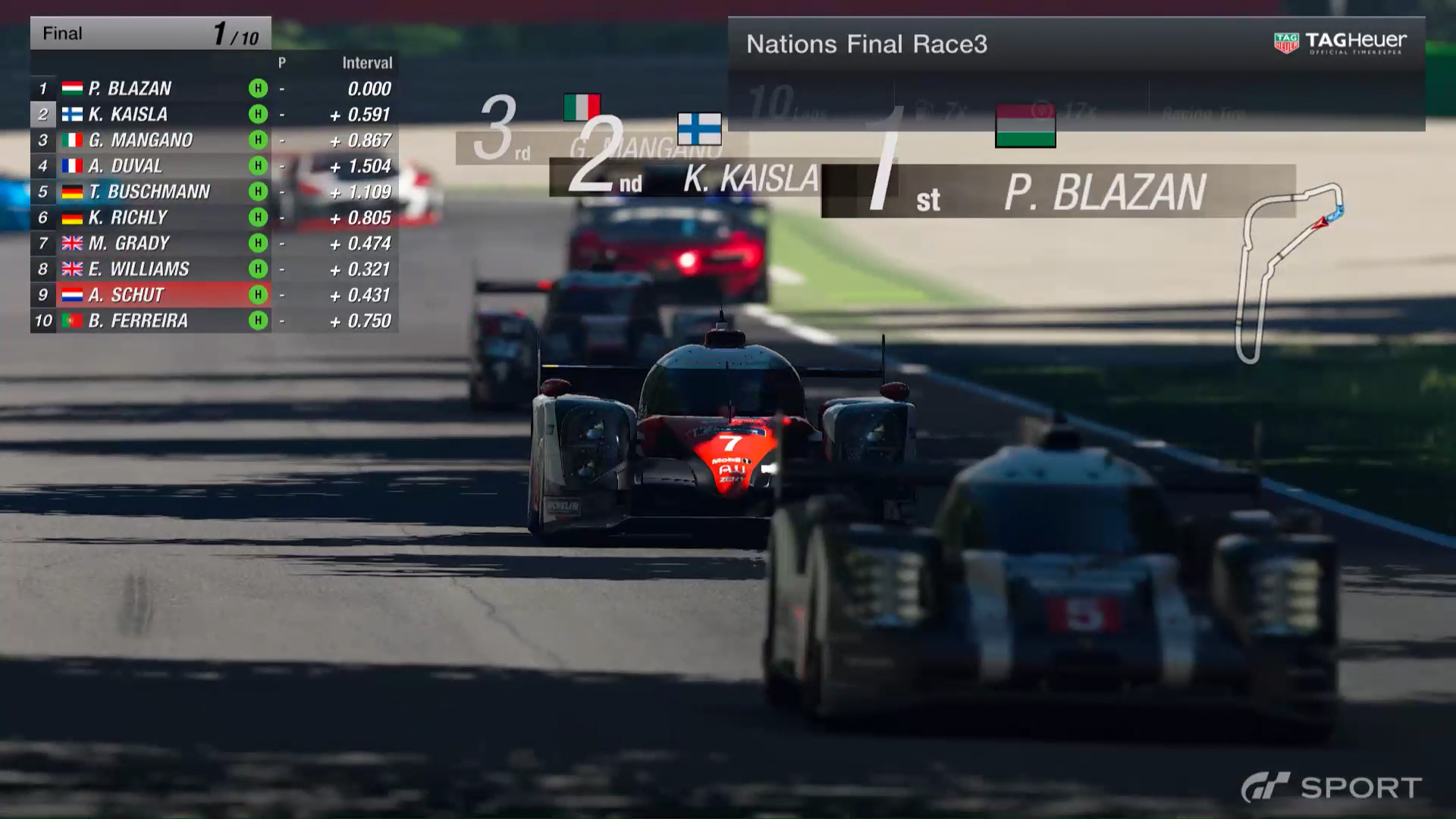 A heated battle was also taking place in the groups behind. Mangano, starting in 5th (Audi R18 TDI), raised his position rapidly with incredible skill, overtaking Kaisla by the 3rd lap to stand in 2nd place. The fight for 3rd was no walk in the park, with Kaisla, Duval (Bugatti Vision GranTurismo (Gr.1)), and Schut (Peugeot L750R Hybrid Vision Gran Turismo) going all out to get ahead. 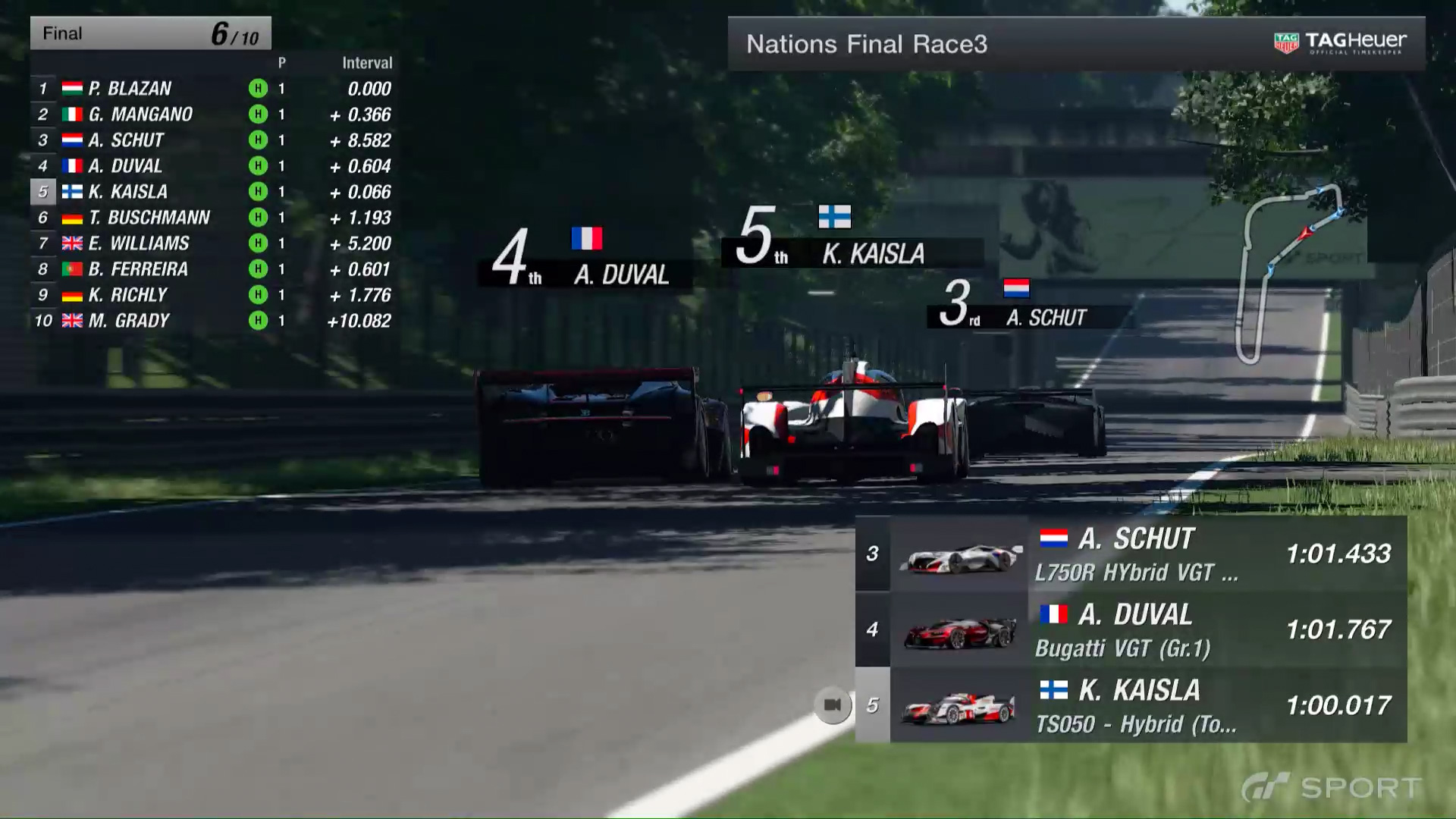 The change in the top group happened on lap 6. Mangano coming out of the pit raised his pace, and passed Blazan on the home straight in lap 7 to take the lead. Blazan followed close behind in a series of tail to nose battles, but the 10 laps ended with no change in position, and the victory of Race 3 went to Italy and Giorgio Mangano. 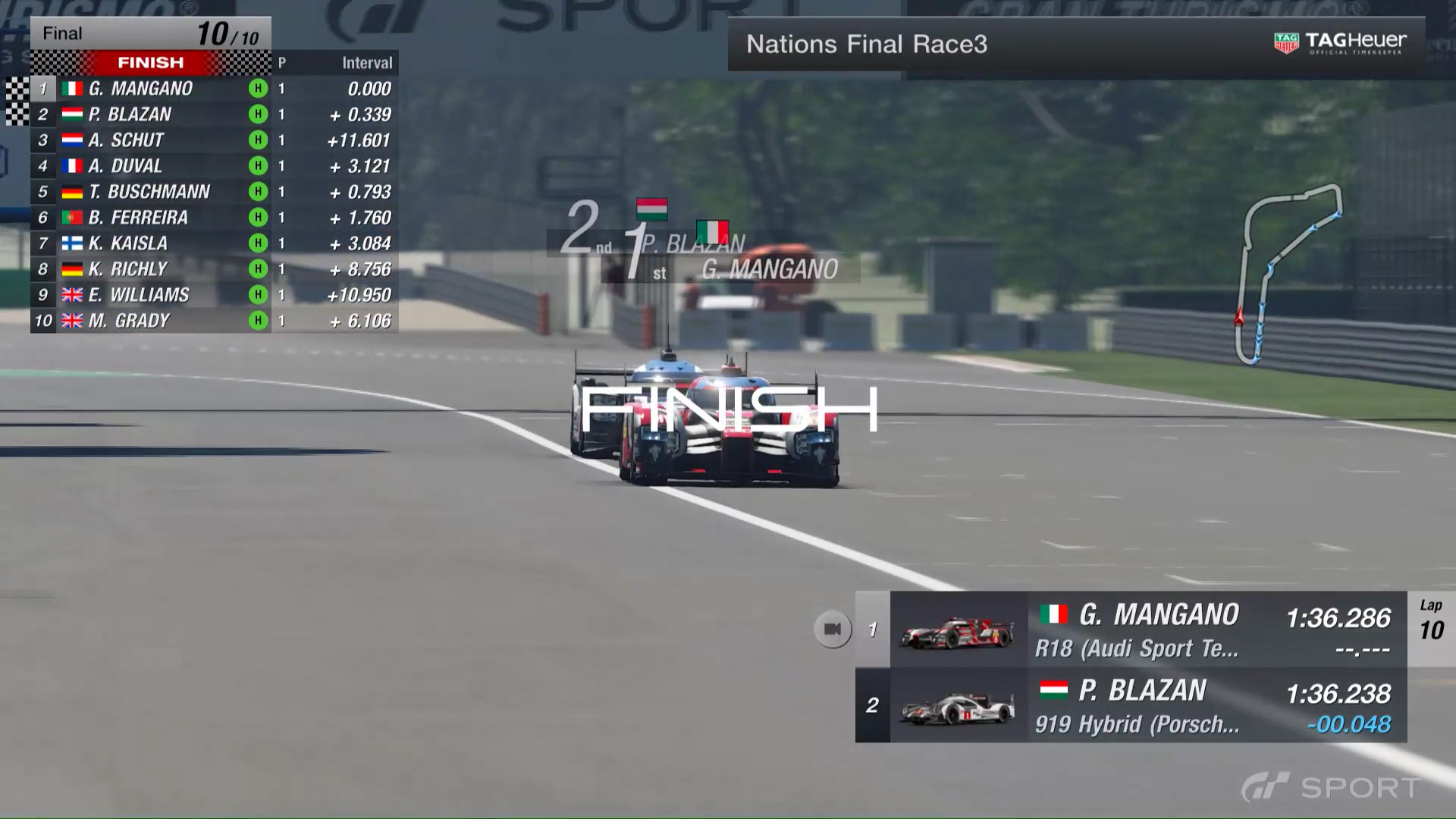 Looking at the point rankings at the end of Race 3, Patrick Blazan was in the lead with 29 points. In 2nd came Anthony Duval (France) with 27 points. And in 3rd was Giorgio Mangano (Italy) and Tarek Buschmann, both tied at 19 points.

Next was Race 4, the race that would determine the champion. Because the points are doubled in this race, players on a lower position in the ranking would still have a last chance. The race was set on Lake Maggiore, a mountainous track. This would be a 20 lap race using Gr.3 cars.

At the start, Blazan from the front row (Mercedes AMG GT3) took the lead with some skilful driving, but Mangano in the Subaru WRX Gr.3 took his place on lap 2. Mangano kept the lead for some time, while a fierce battle erupted between the cars from 2nd and 5th place, with no time to relax. A close dogfight was seen in every lap at the bowel-shaped hairpin waiting at the bottom of the valley, with great cheers from the crowd every time. 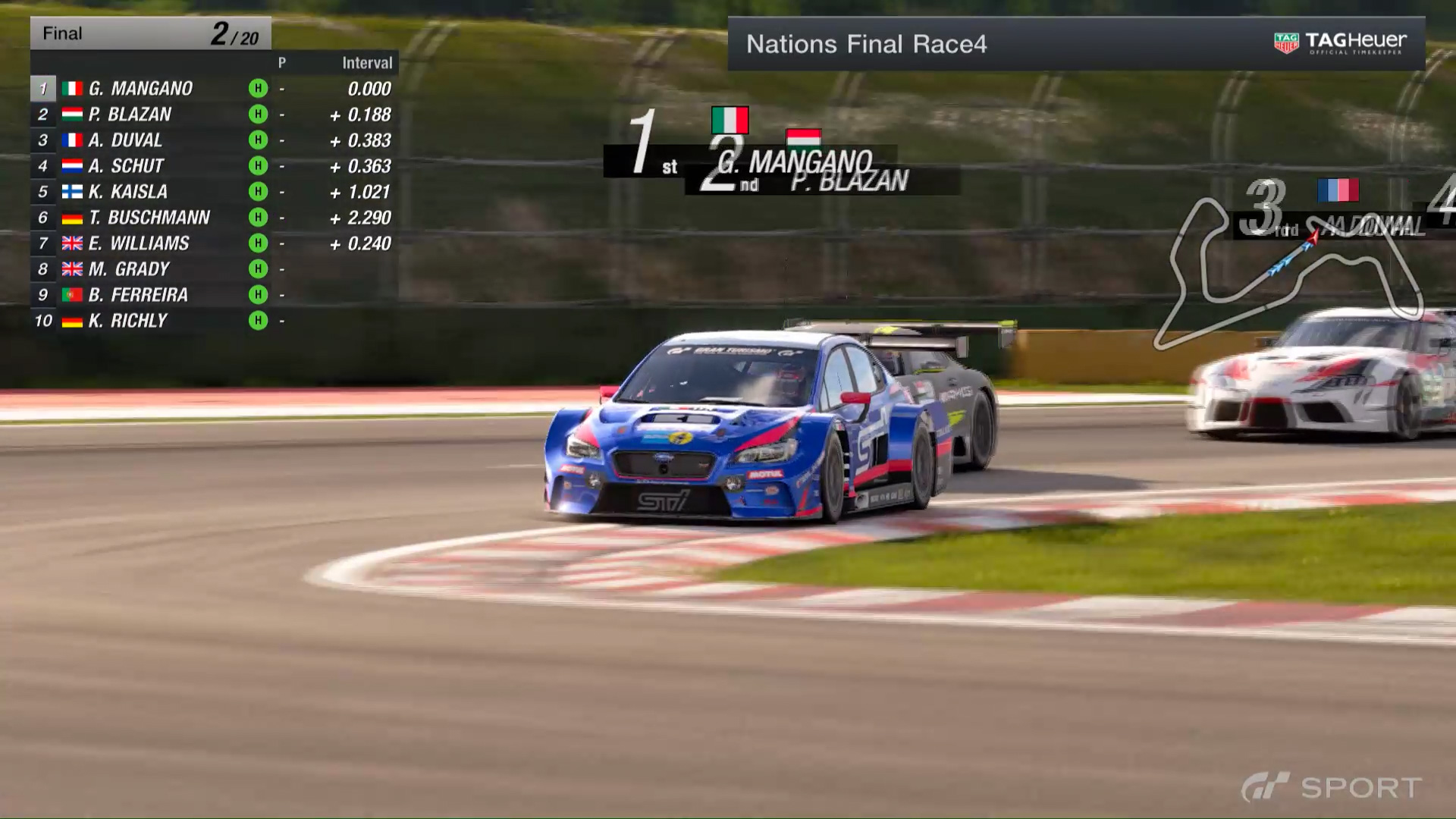 From lap 11 to lap 12, as all the cars began to pit, Grady (Great Britain) in his Lamborghini Huracan GT3 took the lead. But Schut (Renault Sport R.S.01 GT3) and Mangano were quick to catch up, both passing Grady on the last corner of lap 12. On lap 14 Kaisla in the Porsche 911 RSR also passed Grady, rising to 3rd place. Thereafter a miraculous battle continued between the best of the best.

The move was made on lap 17: in the hairpin valley mentioned earlier, Schut passed Mangano to take the lead. The 3 cars continued a very close fight, but Mangano held tight to 1st place, taking it home across the finish line to win Race 4. 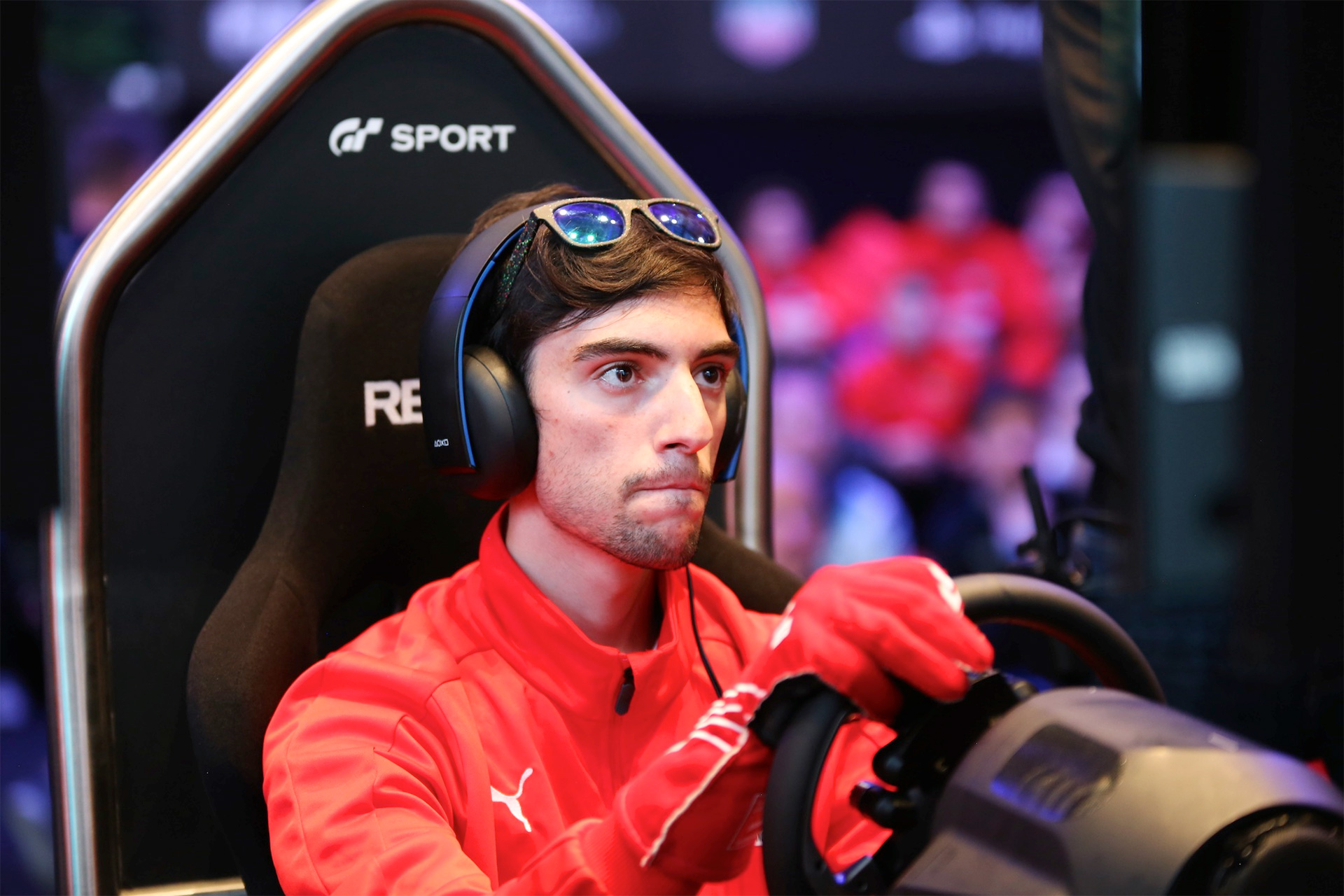 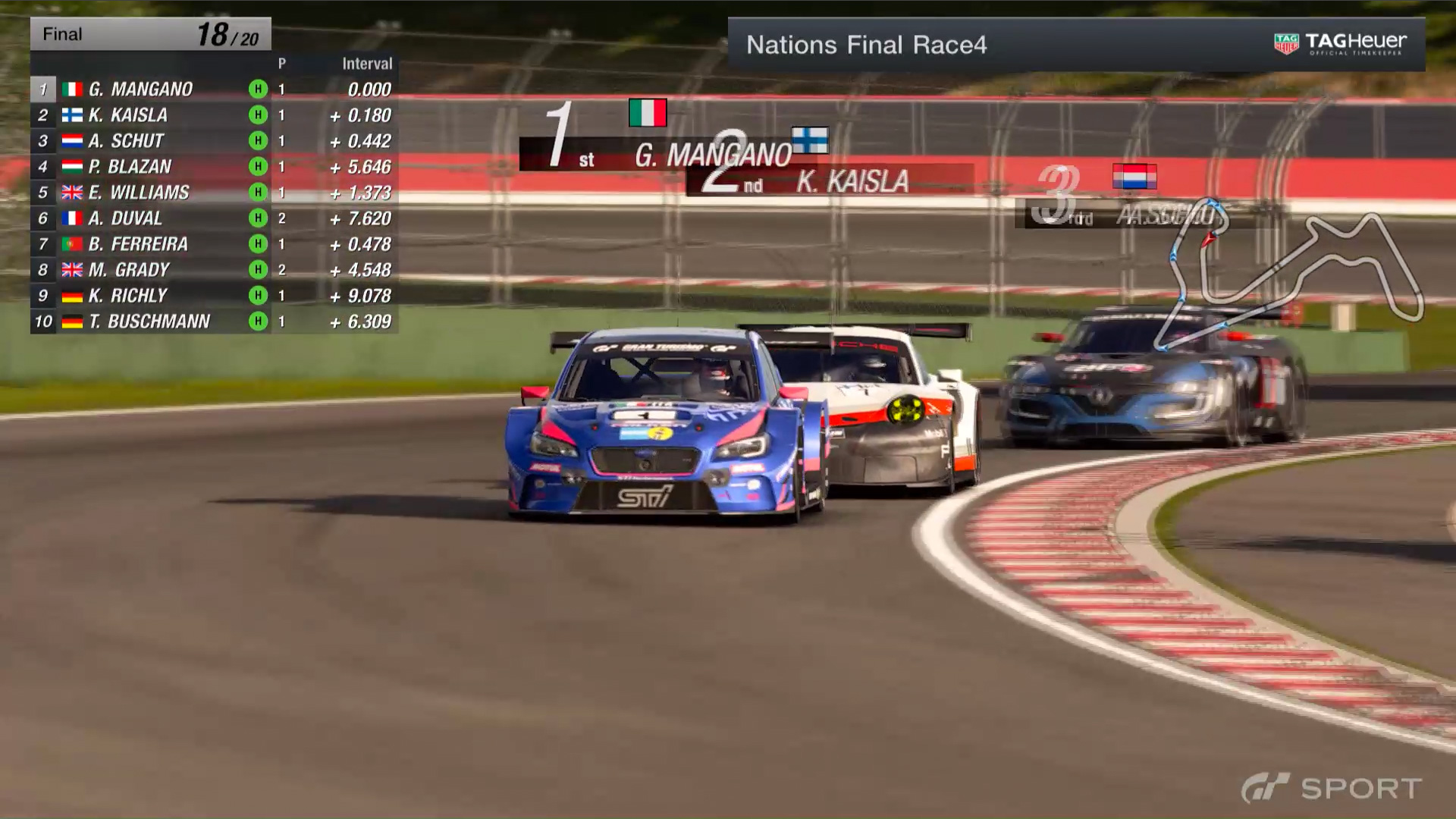 After the end of the four races, the point totals were calculated. As a result, Italy (Mangano) and Hungary (Blazan) ended the series with the same 43 points. However, the result of the final race gave Mangano the advantage, and the victory of the first ever World Tour Nations Cup went to Italy. Hungary then ended in 2nd place and France set on 3rd place with 37 points thanks to its representative Anthony Duval. 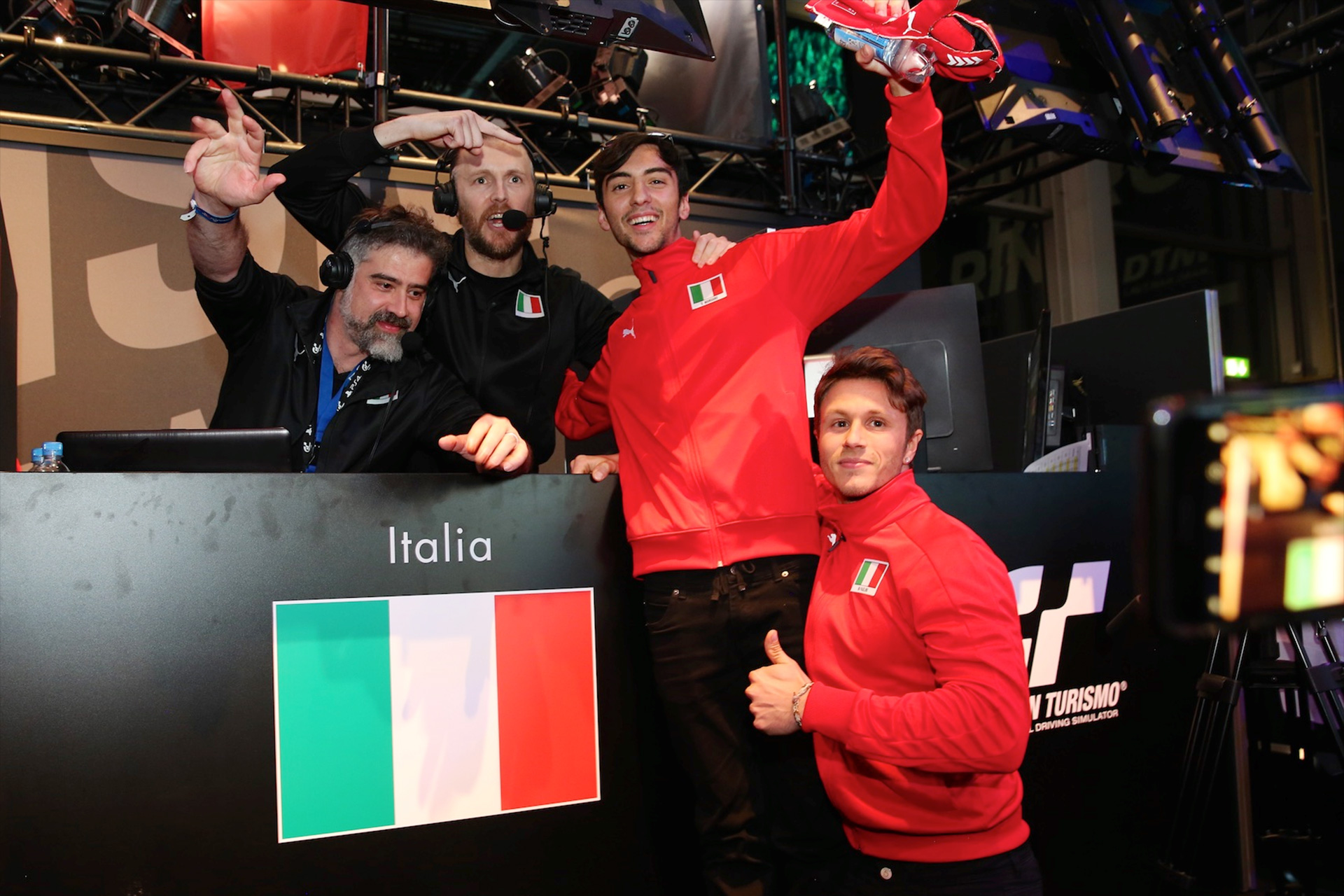 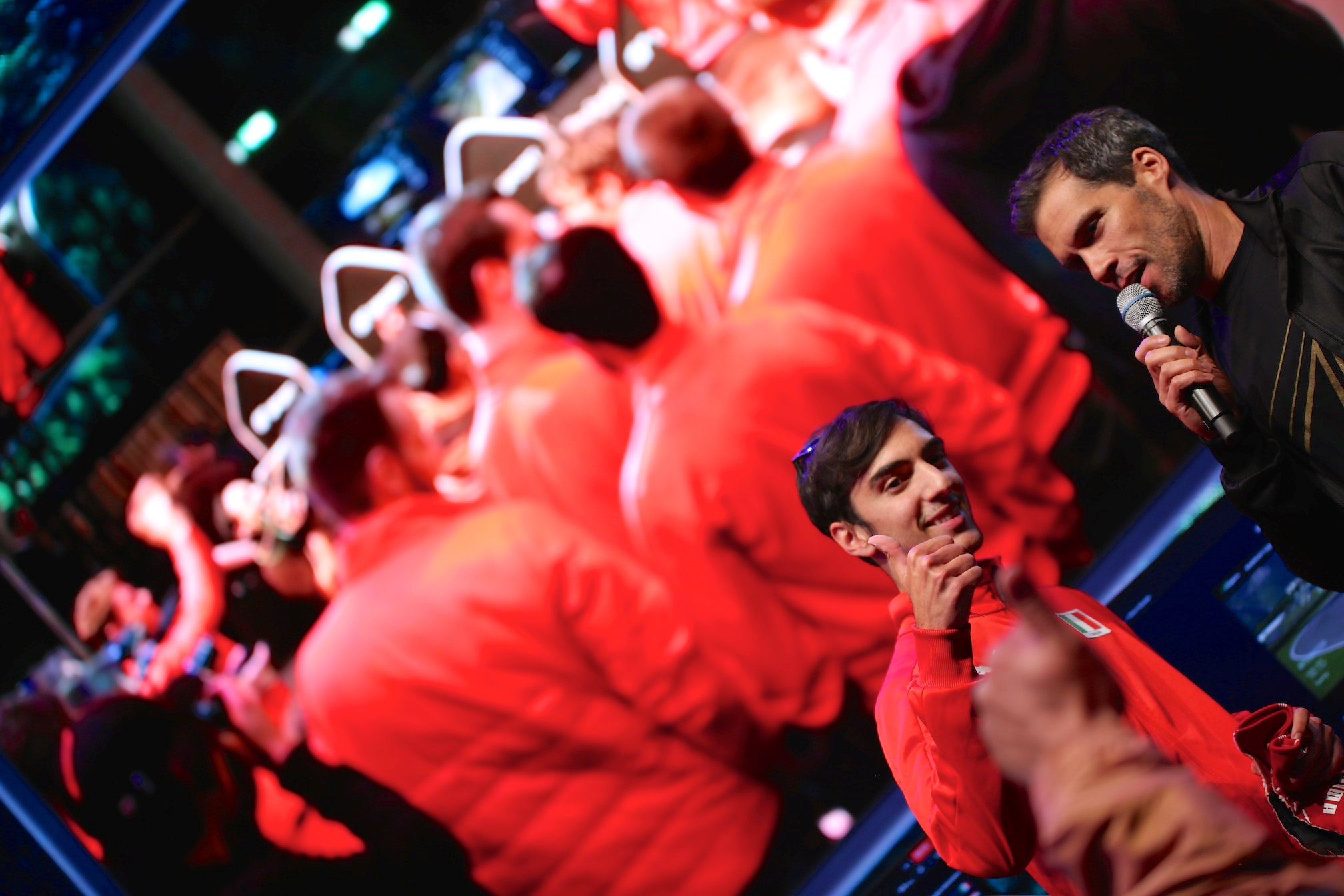 “I think these are some incredible drivers. And these were some incredible races. I was able to confirm, that good drivers are what makes a good racing game. Since we decided with the people of the FIA that we would make a new motorsport, it has been exactly 5 years. It took us 5 years to get here. But this is not the end. This day marks the beginning of a new motorsport. Hereafter, I want to keep making an even better Gran Turismo Sport.”