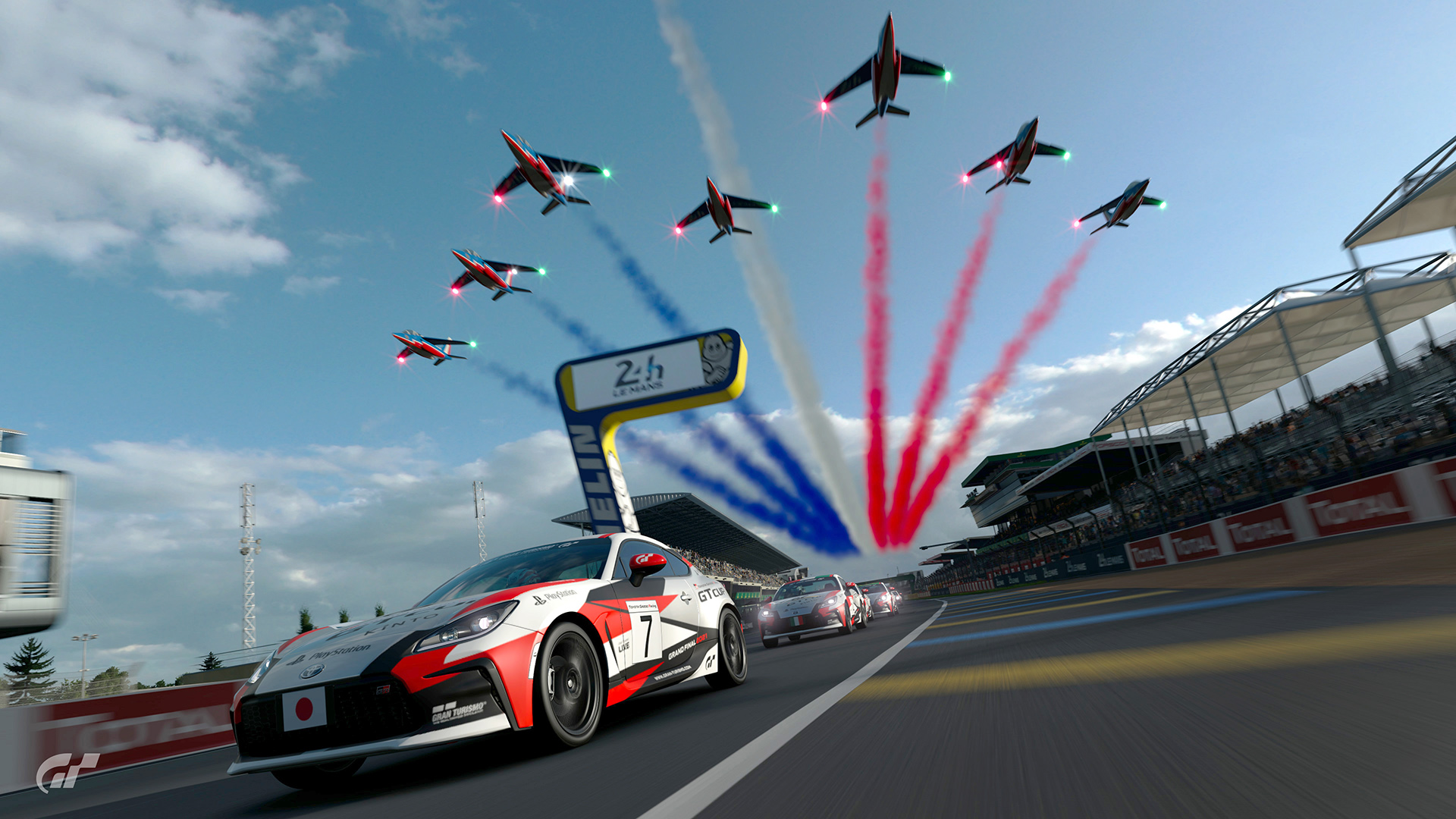 Tokyo, Japan (3 December, 2021) – The TOYOTA GAZOO Racing GT Cup is the perfect prelude to the FIA Certified Gran Turismo Championships World Finals weekend. This One-Make contest featured 24 of the world’s fastest drivers – selected through a combination of online competition and live events - doing battle in Toyota’s GR performance cars. The format consisted of three races—Semi-final A, Semi-final B and the Grand Final—where the starting grid was divided into two groups of 12 for the first two races. The top eight finishers of each semi-final moved onto the Grand Final, making it 16 drivers to vie for the 2021 title. Also, keep in mind that the winner of the previous two Toyota GR GT Cup championships—Mikail Hizal and Takuma Miyazono—went on to win that year’s Nations Cup title.

The venue for both semi-finals was the Red Bull Ring in Spielberg, Austria, where the drivers were required to complete 10 laps in the exciting Toyota GR Yaris RZ. Before the race even began, there was plenty of drama to be had when Japanese driver Tomoaki Yamanaka (yamado_racing38) bested Valerio Gallo of Italy (Williams_BRacer) for pole position by one-thousandth of a second—that’s 0.001 seconds! Brazil’s Lucas Bonelli (TGT_BONELLI) and Giorgio Mangano of Italy (Williams_Gio) lined up in P3 and P4. 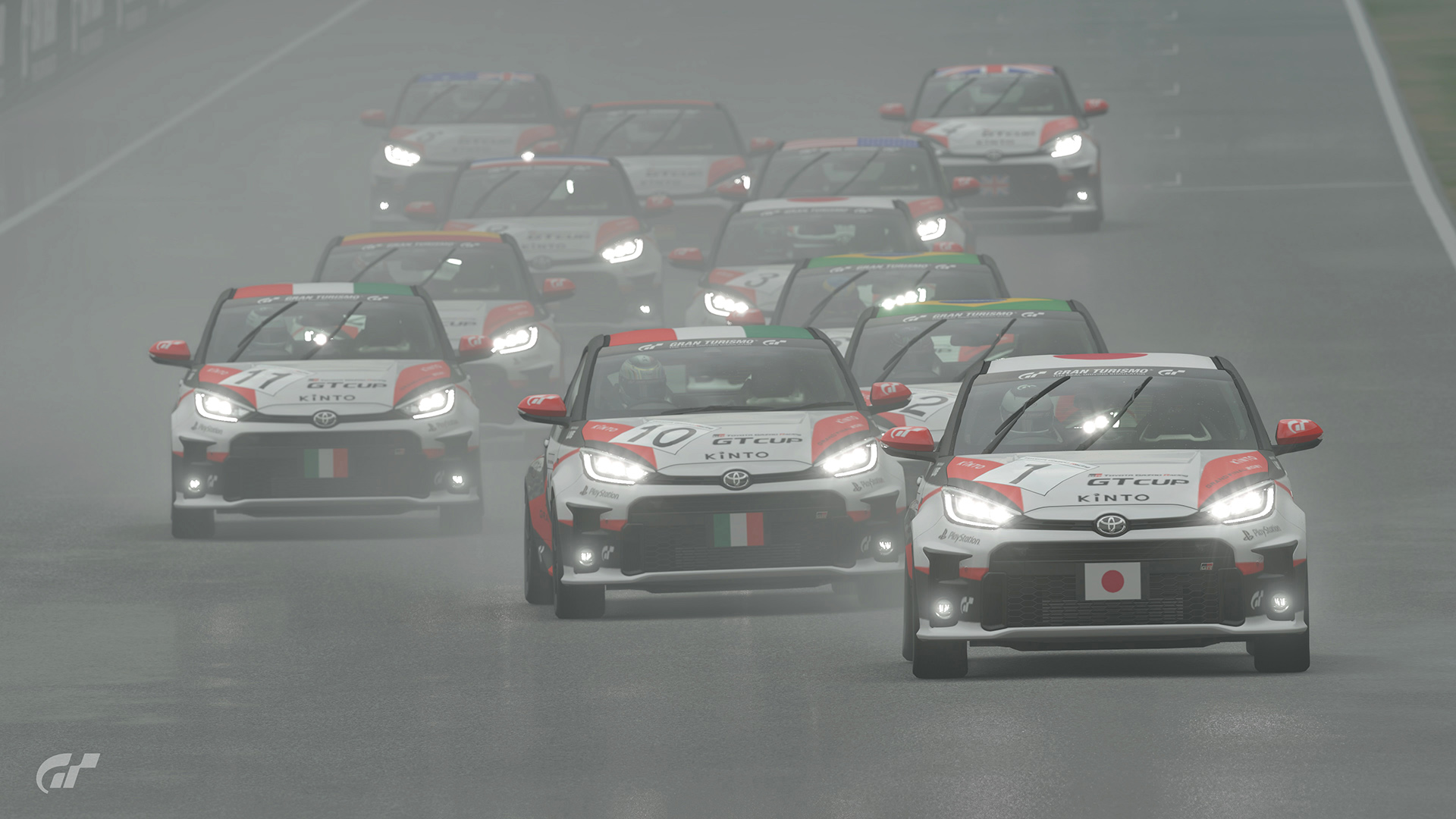 Under a driving rainstorm, the drivers exercised extreme caution from the onset, carefully sliding their cars around the slippery track. 2018 Nations Cup Champion Igor Fraga of Brazil (IOF_RACING17) climbed all over Mangano’s GR Yaris RZ, looking intent on passing the Italian driver to take P4 at the first opportunity. 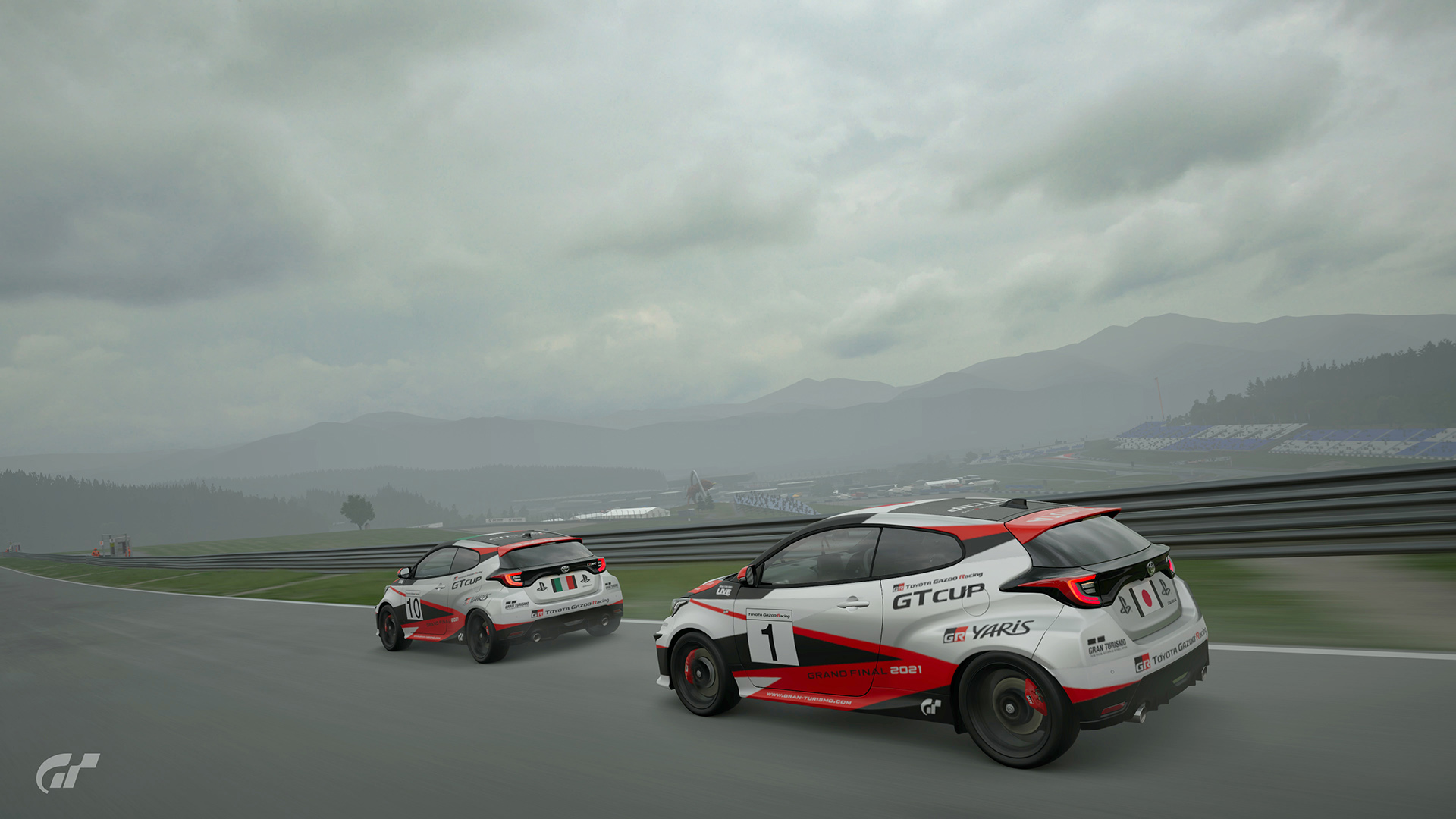 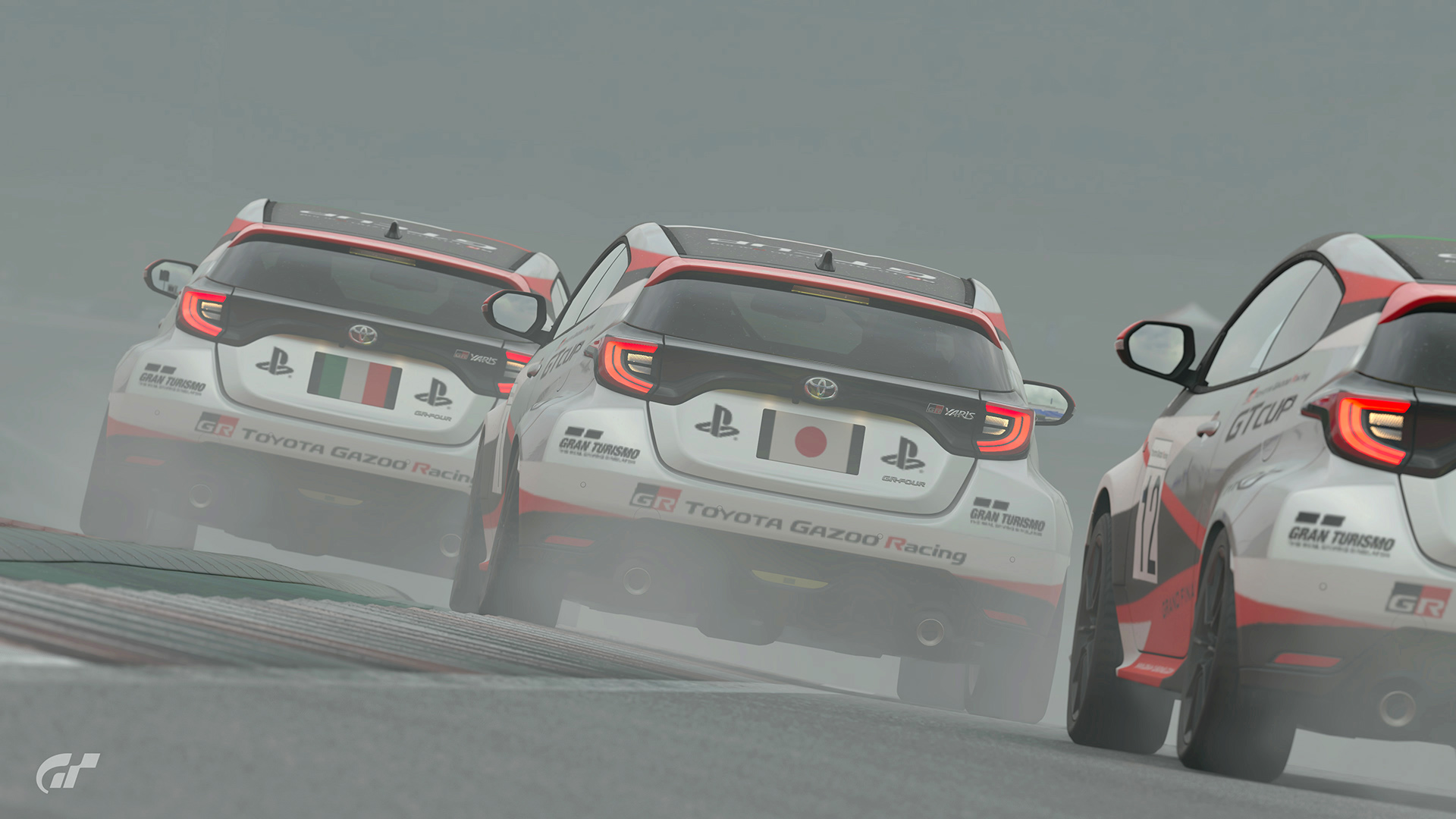 On lap 2, Daniel Solis of the U.S. (PX-7-Lamb) lost traction through Turn 3 and slammed the side of his car into the car of Takuma Sasaki of Japan (LG-TakuAn_LBC) ultimately going off the track and dropping to 12th place. Sasaki did a masterful job of keeping his car pointed in the right direction and dropping only one spot to P8. But for Solis, after being penalized two seconds for the move, there would be no podium finish.

The running order remained largely unchanged for the next several laps, with Yamanaka remaining in the lead. It was on lap 7 when he started feeling intense pressure from Gallo. Staying glued to Yamanaka’s rear bumper, the Italian looked to pass him on every corner. On the following lap at Turn 2, Gallo finally got by to claim the race lead. For Yamanaka, things went from bad to worse when, on the penultimate lap, he braked hard to avoid ramming into Gallo’s Yaris, only to be bullied out of the way by Bonelli, handing him P2. Meanwhile, Spaniard Coque López (coqueIopez14) passed Fraga to move into 5th place, thoroughly reshuffling the top of the running order in a span of two laps. 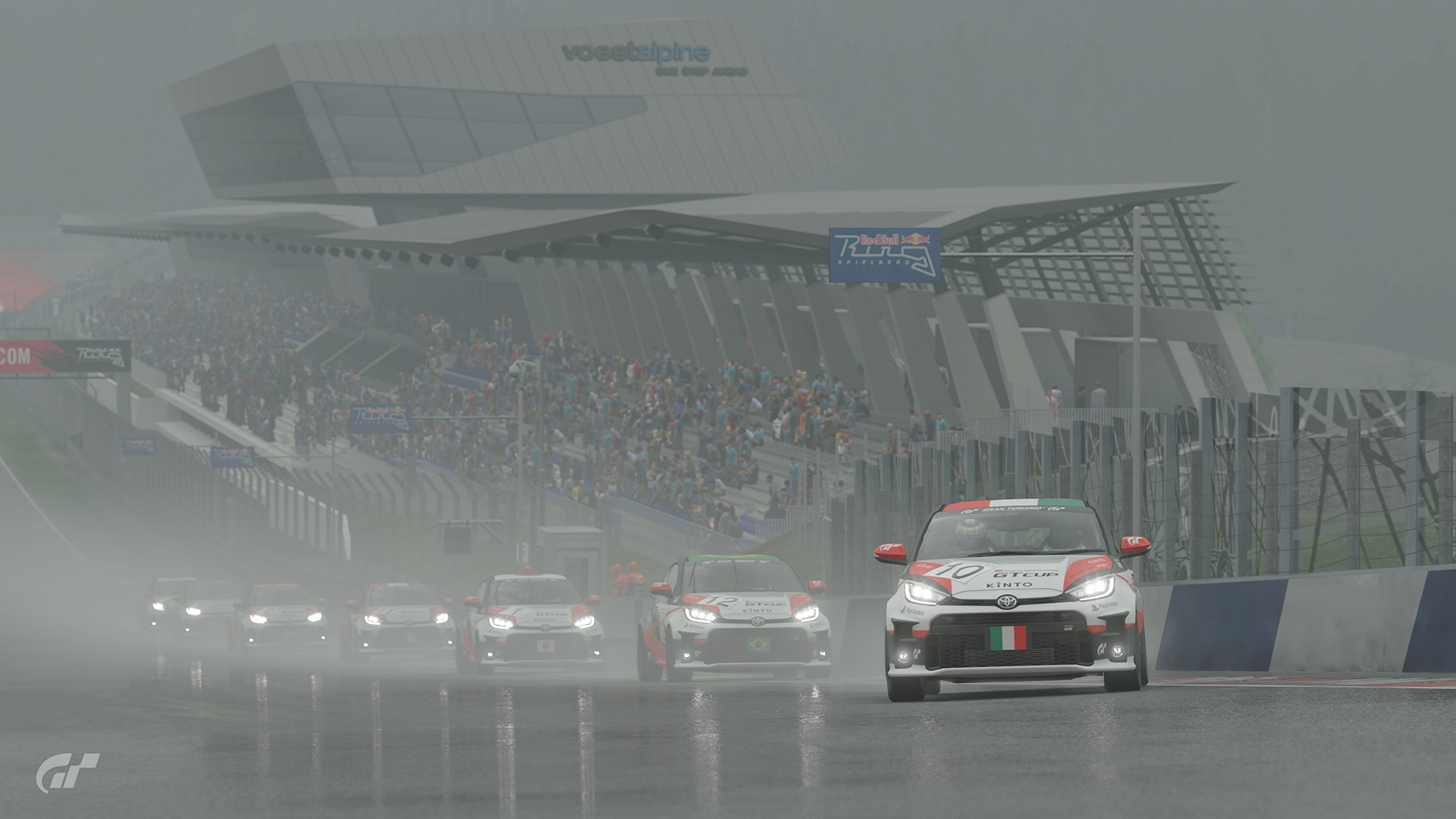 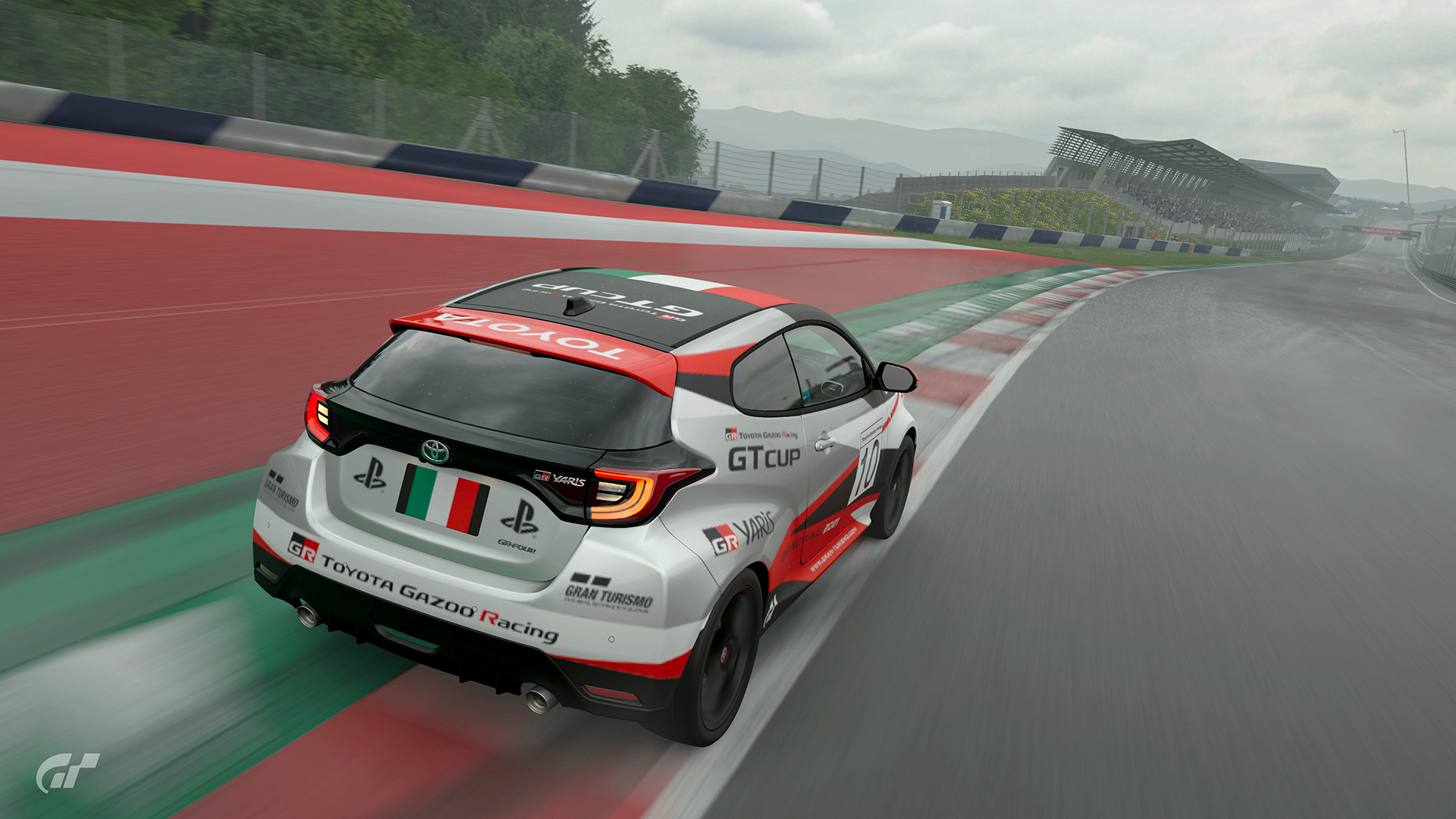 It was a repeat of the Red Bull Ring in wet conditions for the second semi-final, with the drivers piloting identical Toyota GR Yaris RZs for 10 laps. Sitting on pole for this one was 16-year-old newcomer Rikuto Kobayashi of Japan (TX3_tokari71), followed by fellow countryman Takuma Miyazono (Kerokkuma_ej20), the defending champion, while Spain’s Jose Serrano (PR1_JOSETE) and Thomas Labouteley of France (TX3_Aphelion) occupied the second row.

The cars got away cleanly from a standing start, driving in a single file through the first two corners; however, at Turn 3, Miyazono decided to apply some serious pressure to Kobayashi, tapping him a couple times before backing off. The move backfired because the in-form Serrano saw an opportunity and sped his GR Yaris past Miyazono’s through the following corner to claim P2. 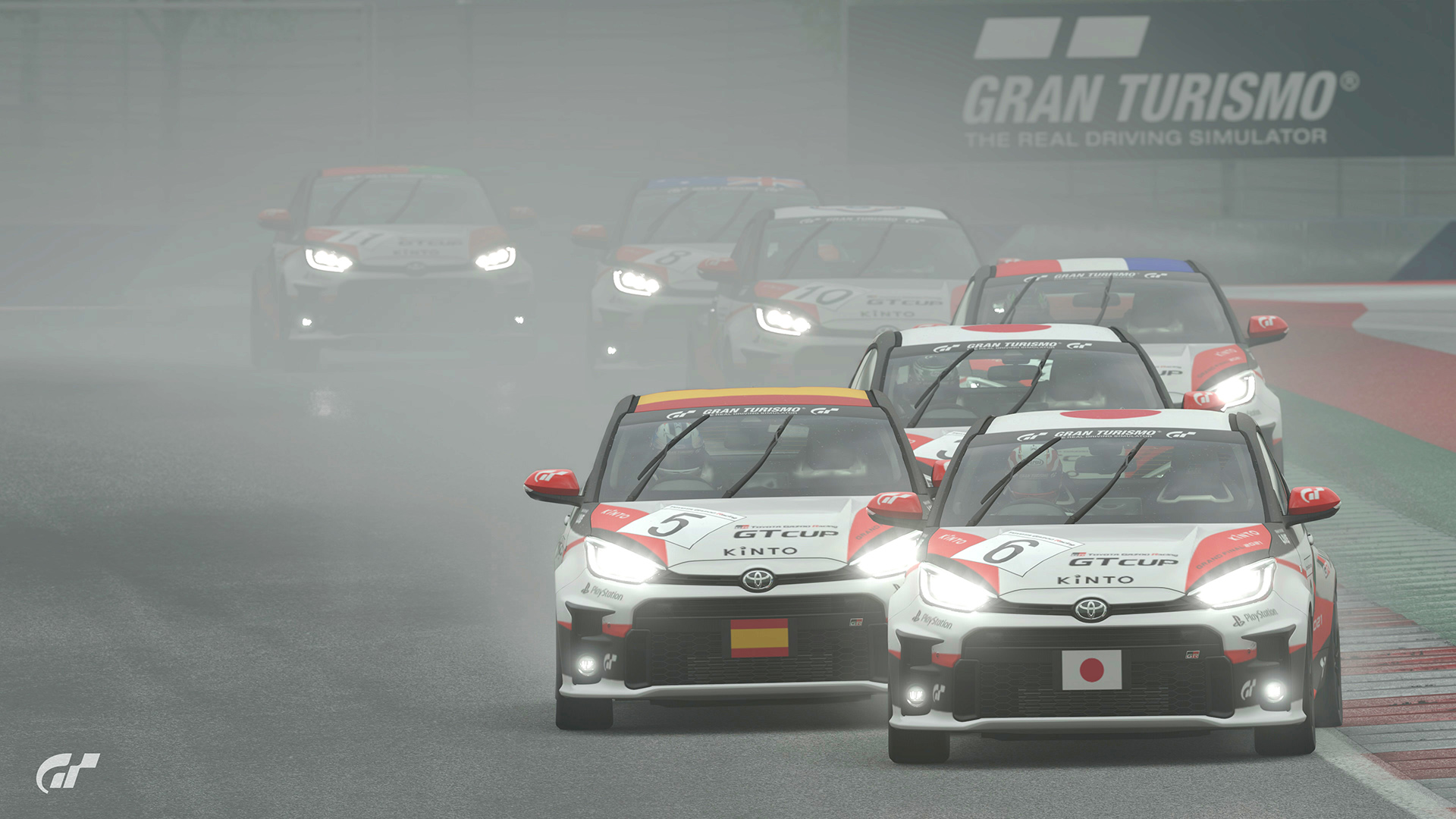 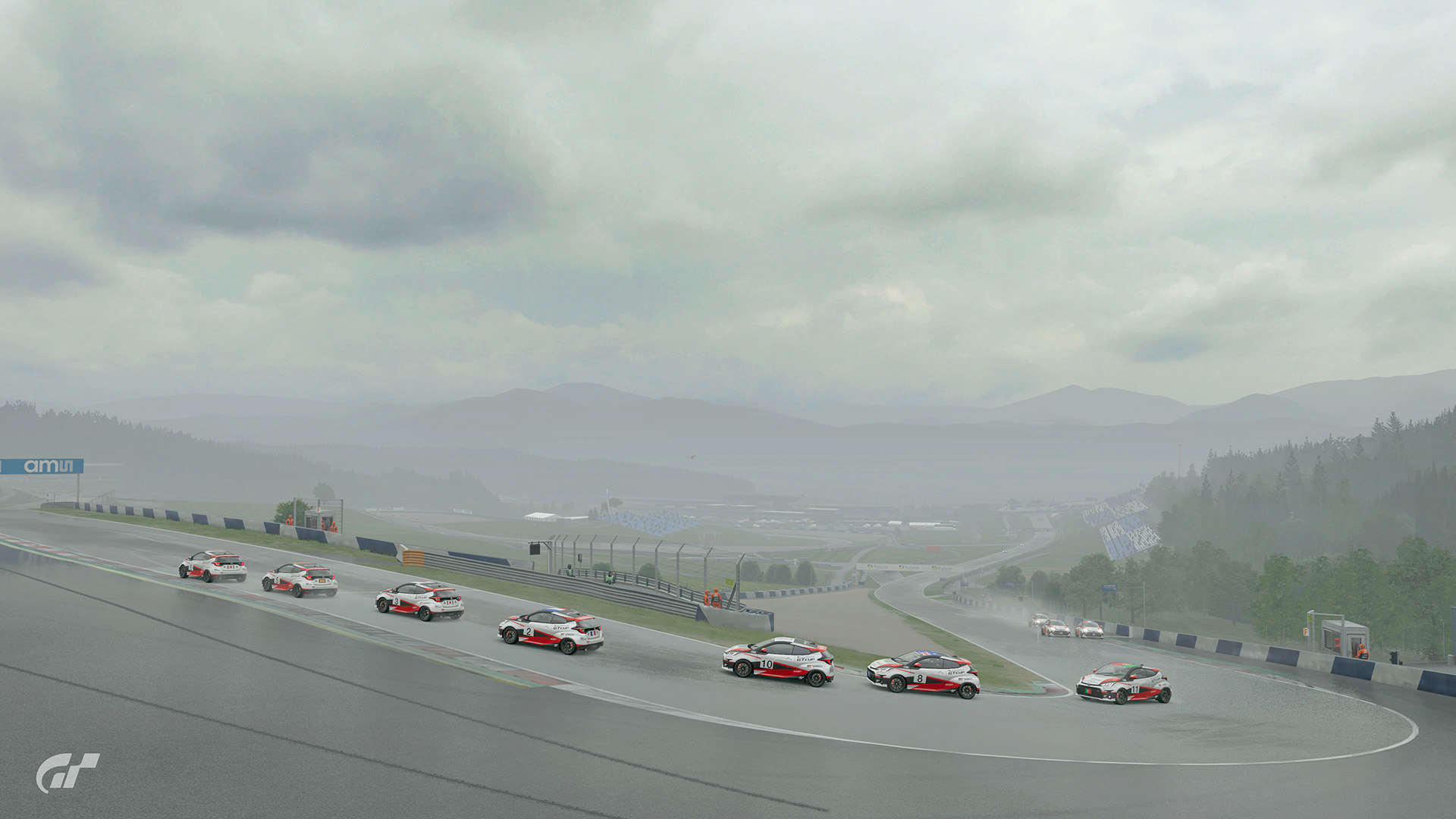 The running order remained the same for the first half of the race, with the top seven positions tightly packed together. Not more than seven-tenths of a second separated each car. What surprised many was the way Kobayashi kept calm, maintaining his lead despite the fact that two very fast FIA Gran Turismo Championships front-runners were filling his mirrors. While everyone watching live anticipated Serrano and Miyazono making their move to claim the race lead, Kobayashi played spoiler by not allowing them to come even close. In the end, he took the checkered flag and the pole-position spot on the Grand Final grid thanks to Semi-final B being the faster race. Rounding out the top six was Serrano, Miyazono, Labouteley, Ben Chou of Taiwan (Gmotor_SBen), and Australia’s Andrew Lee (PX7-AmazingHour), who had his hands full holding off Carlos Salazar of Portugal (pcm_stj) for P6. Kevin Pounder of the U.S. (PX7-Windfire1528) managed to grab the last qualifying spot with an 8th-place finish. 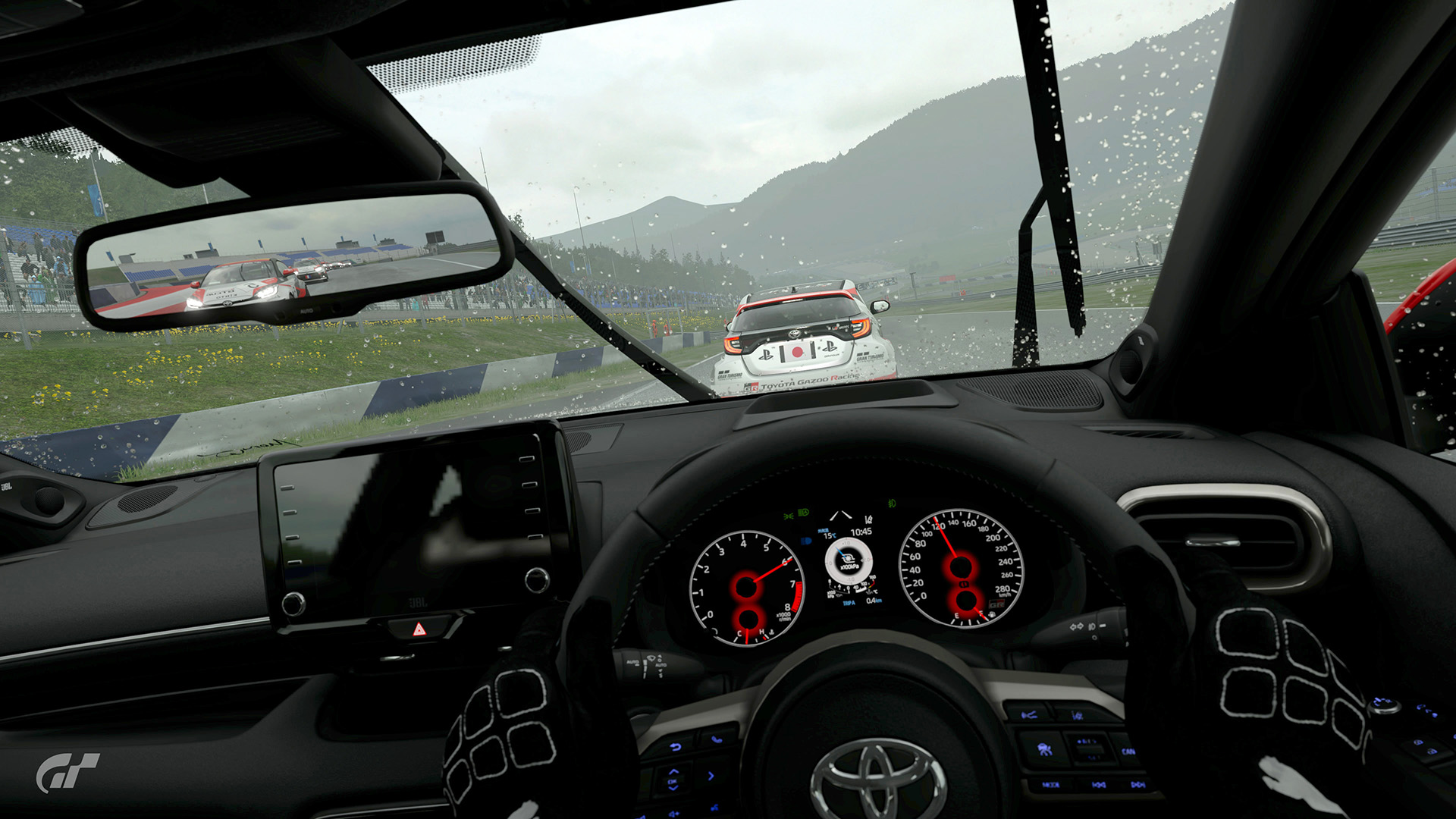 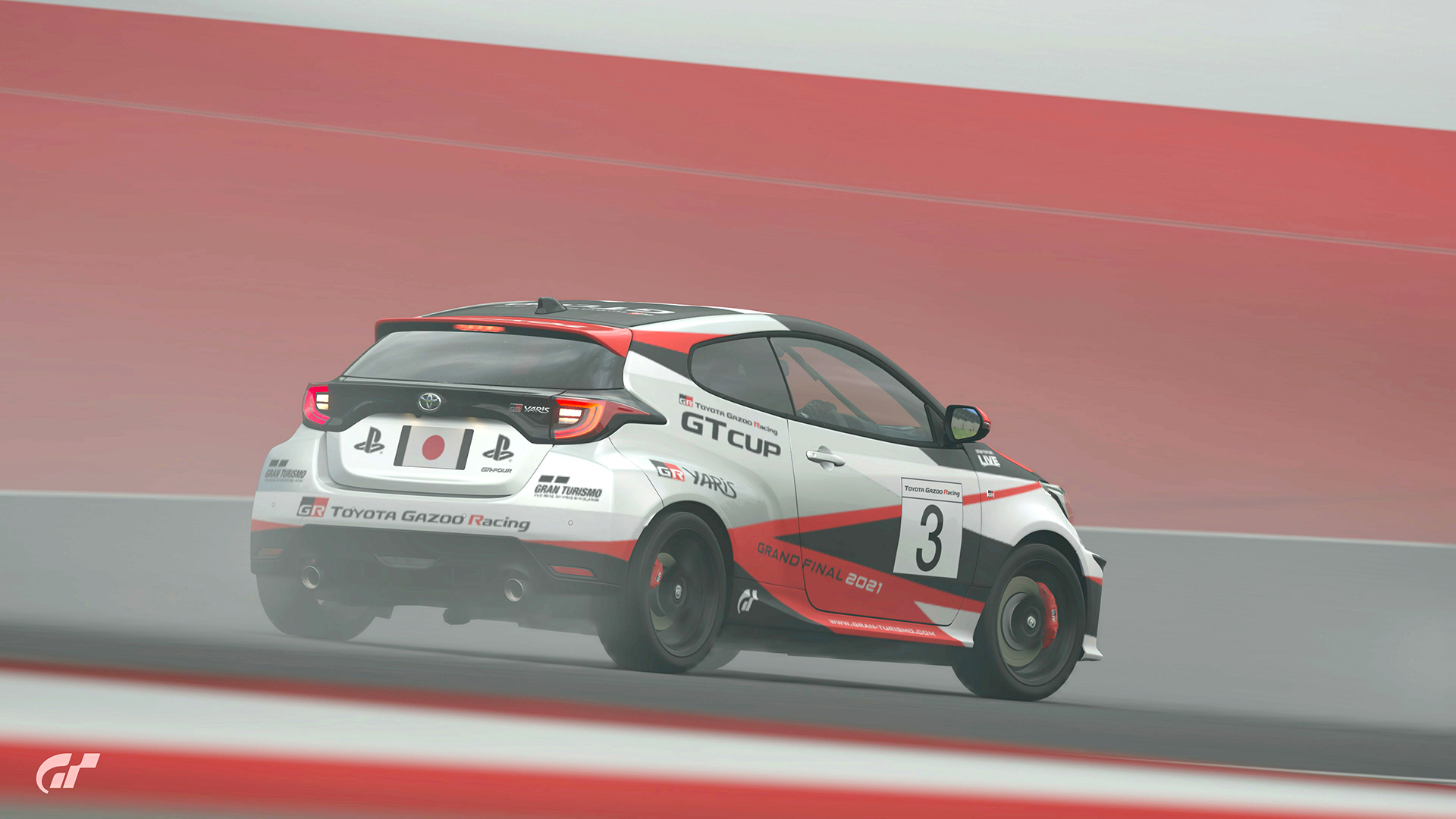 The grid was set for the Grand Final of the TOYOTA GAZOO Racing GT Cup by the finishing order from the two semi-final races (pole for the faster semi B, second for the winner of semi A, and so on). It was the moment of truth for the 16 racers who made it this far. Sitting on pole was Japanese driver Rikuto Kobayashi followed by Valerio Gallo of Italy. Right behind them were Jose Serrano of Spain and Lucas Bonelli of Brazil, while the Japanese duo of Takuma Miyazono and Tomoaki Yamanaka sat in P5 and P6. The final contest was a six-lap sprint around the Circuit de la Sarthe—home to the 24 Hours of Le Mans—in the wonderfully-balanced Toyota GR 86. The drivers were required to make at least one pitstop, but not obliged to refuel or change tires. 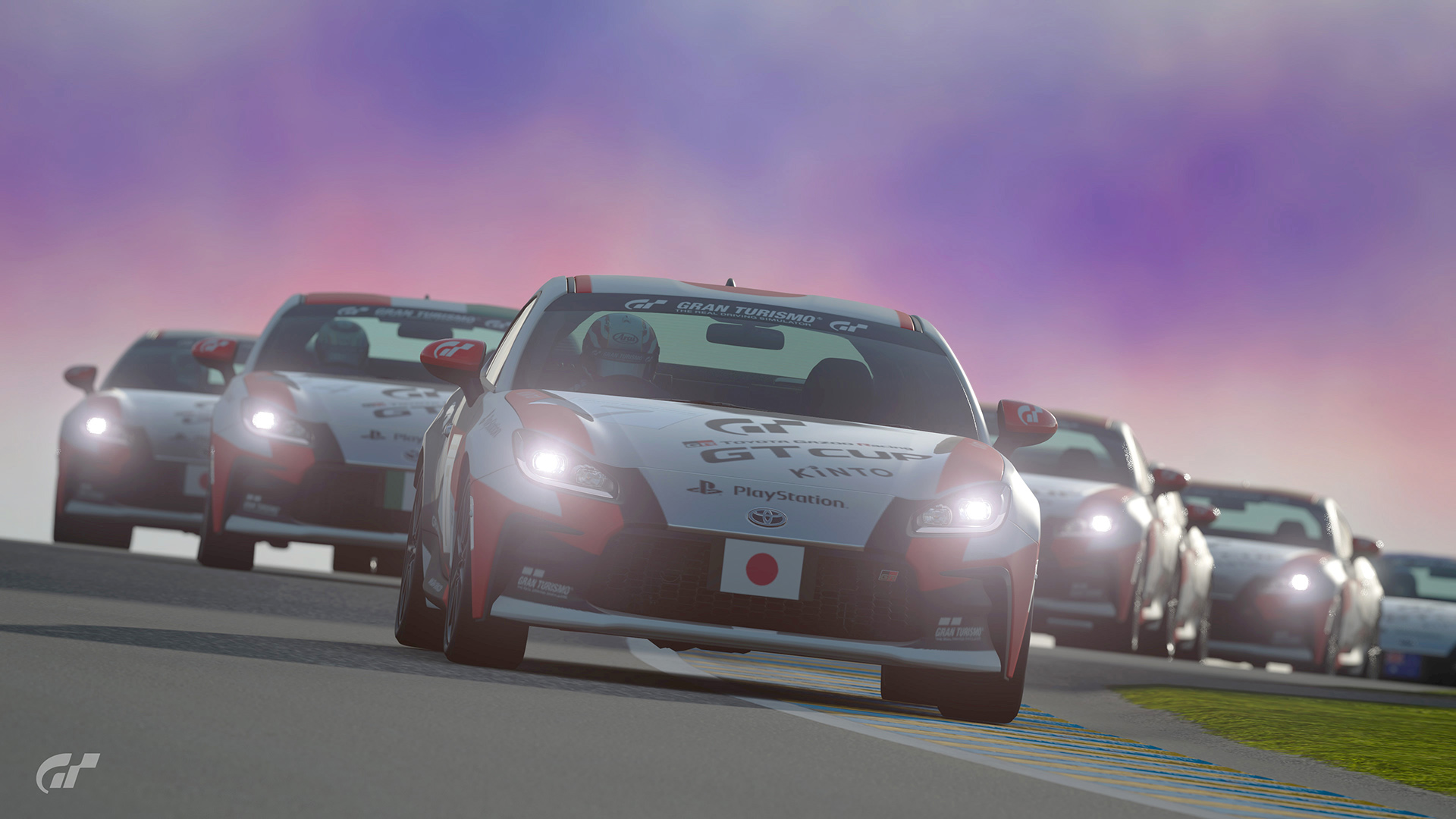 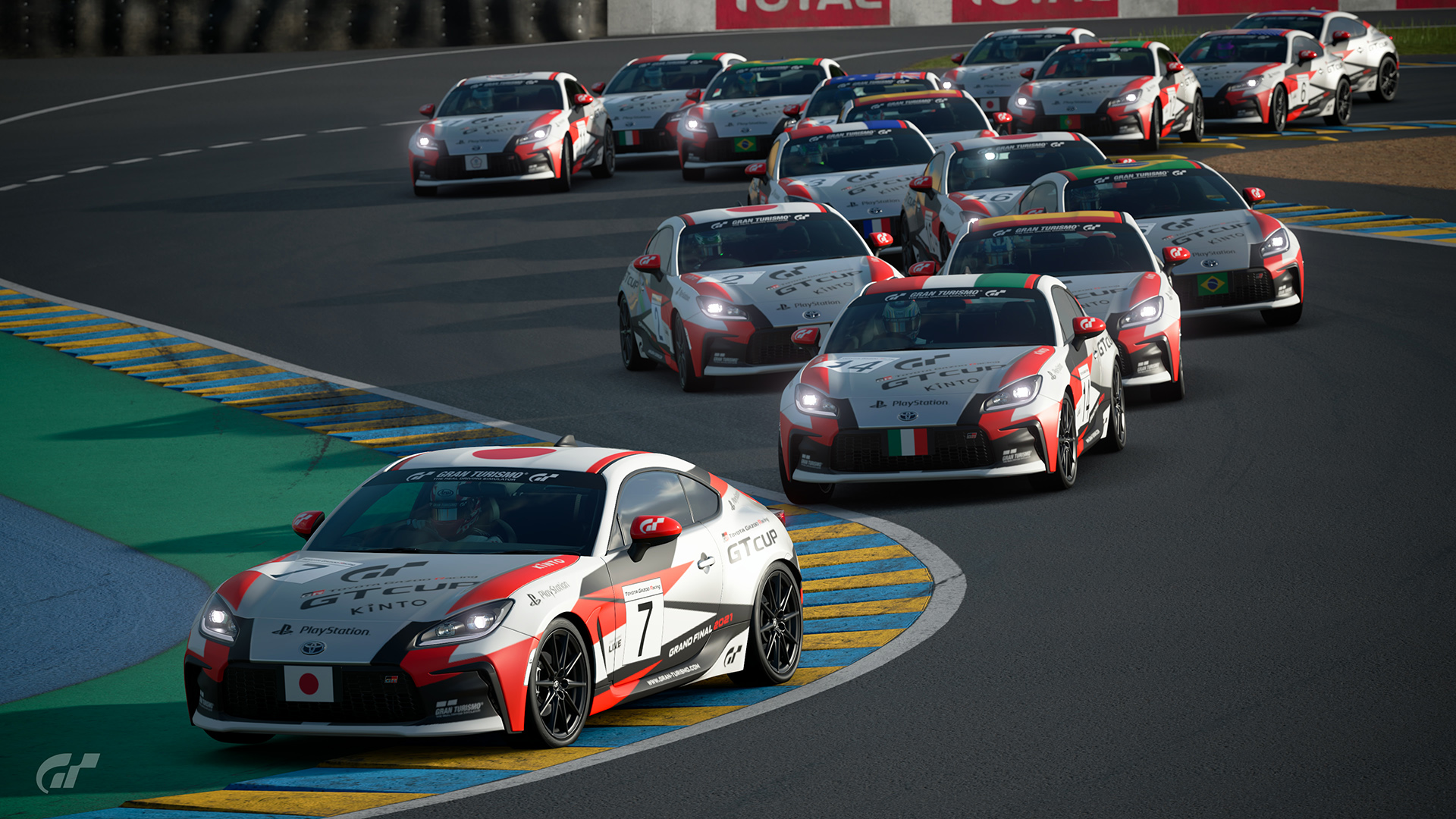 At the start, the cars relentlessly battled for position as Miyazono briefly moved past Bonelli for 4th place, only to give it back on the next corner. Reaching 240 km/h on the Mulsanne Straight, all 16 GR 86s settled into a single-line formation, looking to use each other’s slipstream to prepare for a passing move into Mulsanne Corner. At the end of lap 1, Spaniard Coque López, running in 10th place, entered the pits to fulfill his required pitstop earlier than anyone else. By the end of lap 2, the top eight cars separated themselves from the rest of the field building up a 5.0-second cushion. At the end of this lap, almost every car visited the pits, with the exception of the four leaders—Kobayashi, Gallo, Serrano and Bonelli—who chose to stay out. 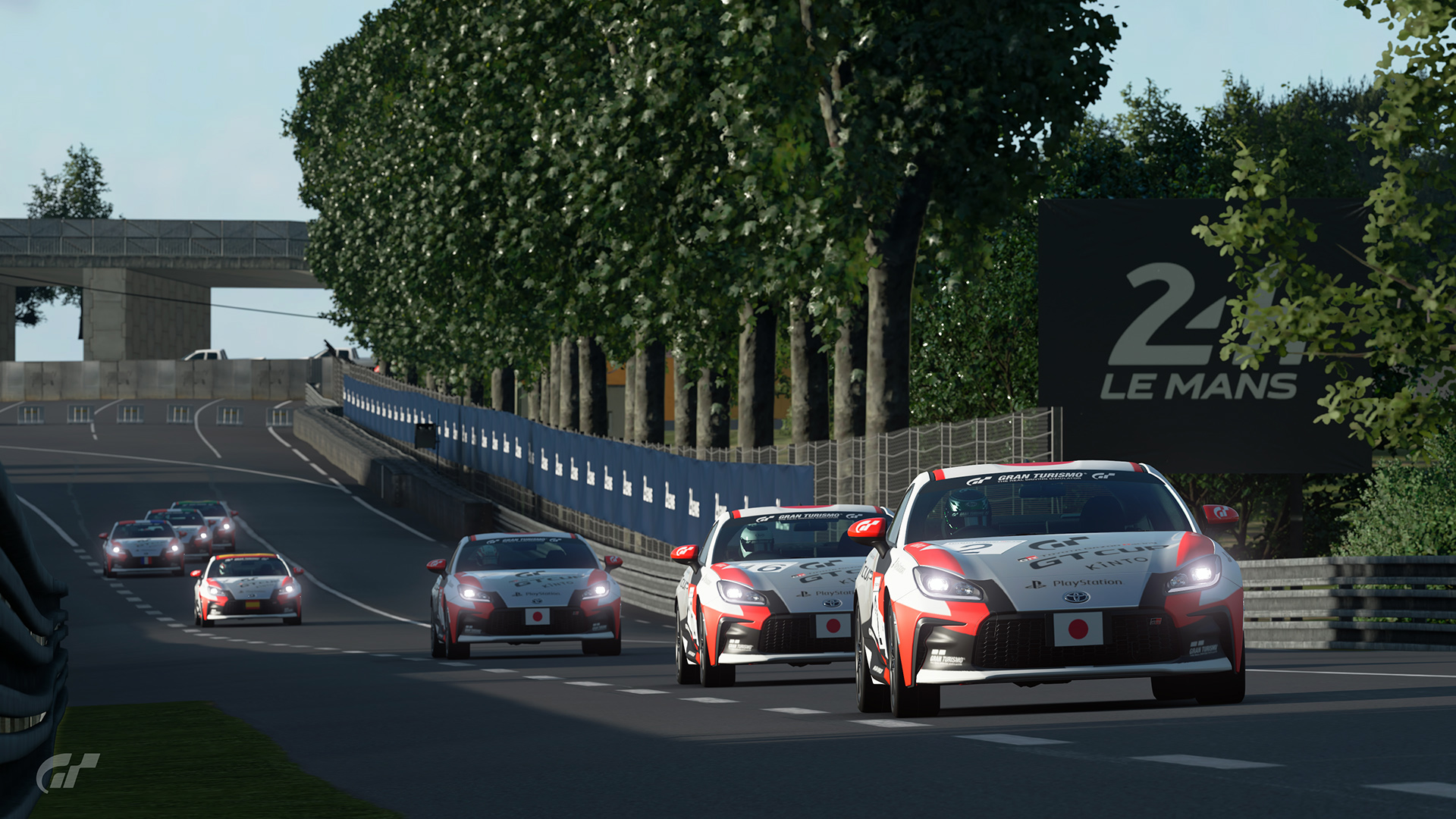 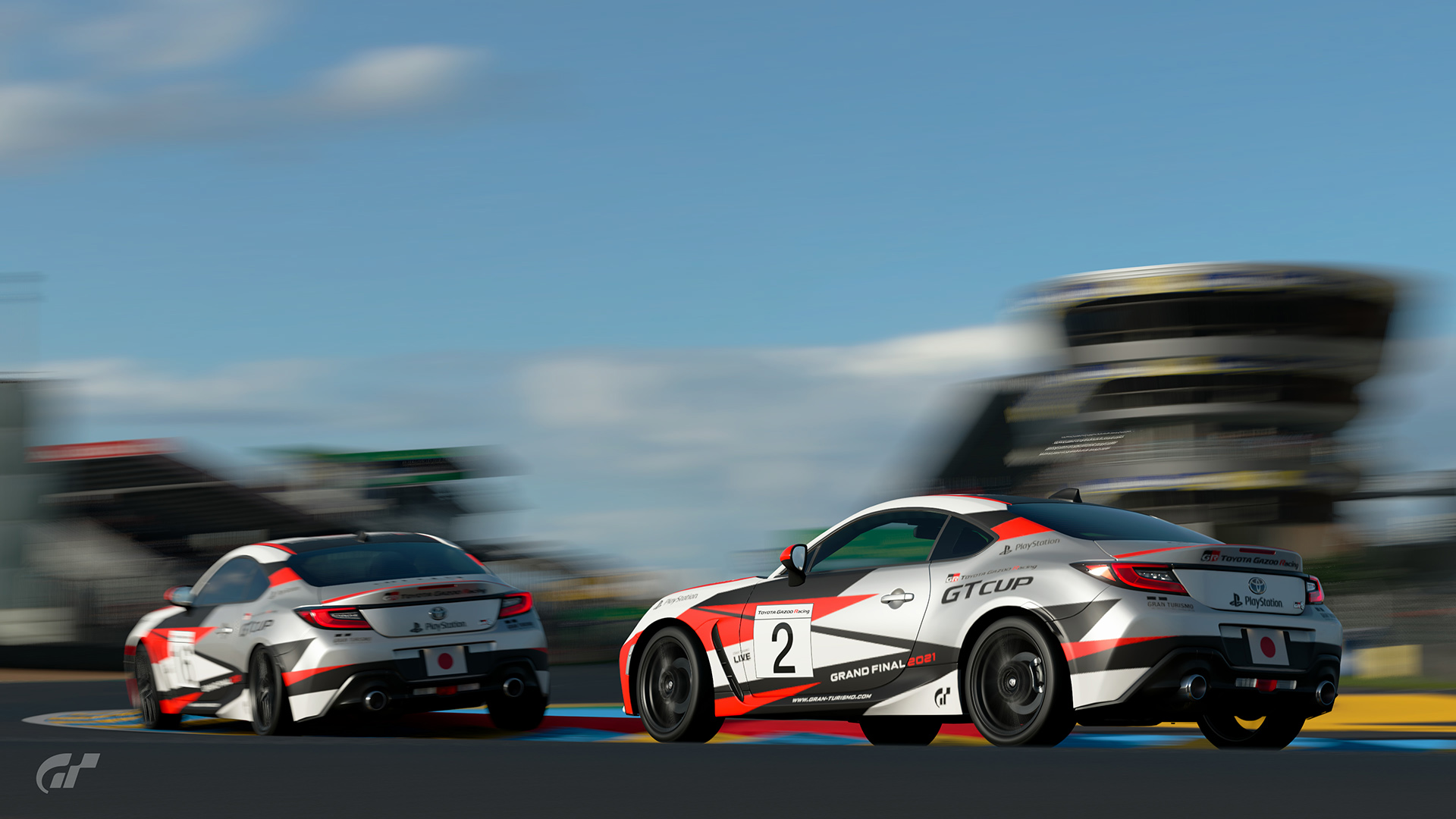 On lap 3, a vicious duel ensued between Gallo and Kobayashi. The Italian driver slid past the Japanese driver through the first part of the Mulsanne Straight (before the Forza Chicane), but Kobayashi returned the favor getting the lead back on the same straight! Then Gallo grabbed it right back when he made a pass to the inside through Mulsanne Corner (Turn 9).

Meanwhile Miyazono, who had already made his pitstop and running in 6th place, began slowly shrinking the gap between him and the race leaders. At the start of lap 4, he was 11.5 seconds from 4th-place Bonelli, but that was soon to change when the Brazilian and the others came in for their pitstops.

Kobayashi took the lead away from Gallo on lap 4 through Indianapolis Curve (Turn 10 and 11), but dove into pitlane soon after. What caught everyone by surprise was that Gallo and Serrano decided to stay out, with the hope of building up a large lead on a clear track, but they risked losing speed on worn tires. 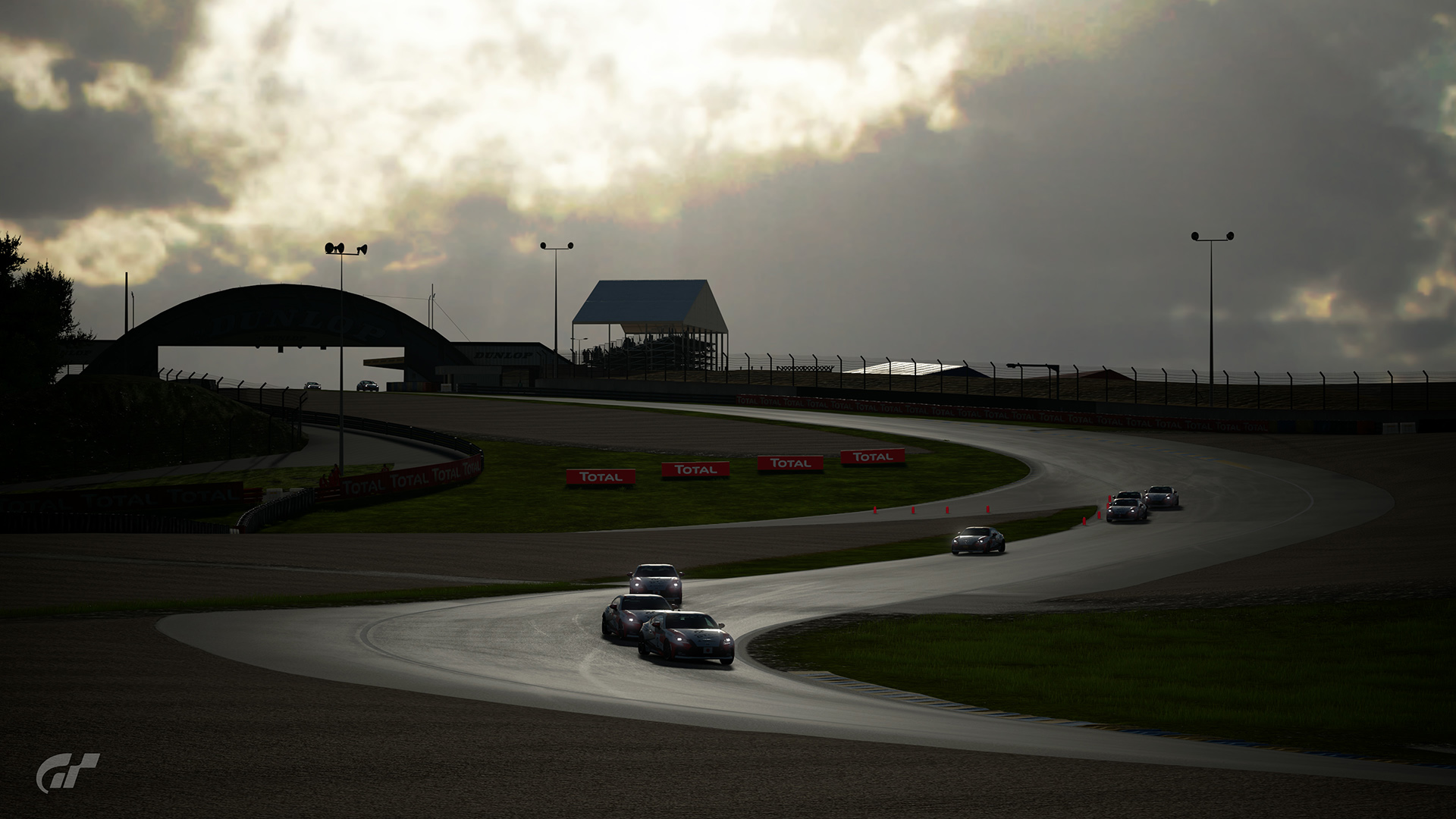 When Kobayashi returned to the track, he found himself in 6th place, behind Miyazono and Yamanaka. Bonelli returned to the race in a disappointing 9th place. With only two laps to go, Gallo and Serrano maintained an 11-second cushion over the Japanese trio of Miyazono, Yamanaka and Kobayashi. The question was, would it be enough? 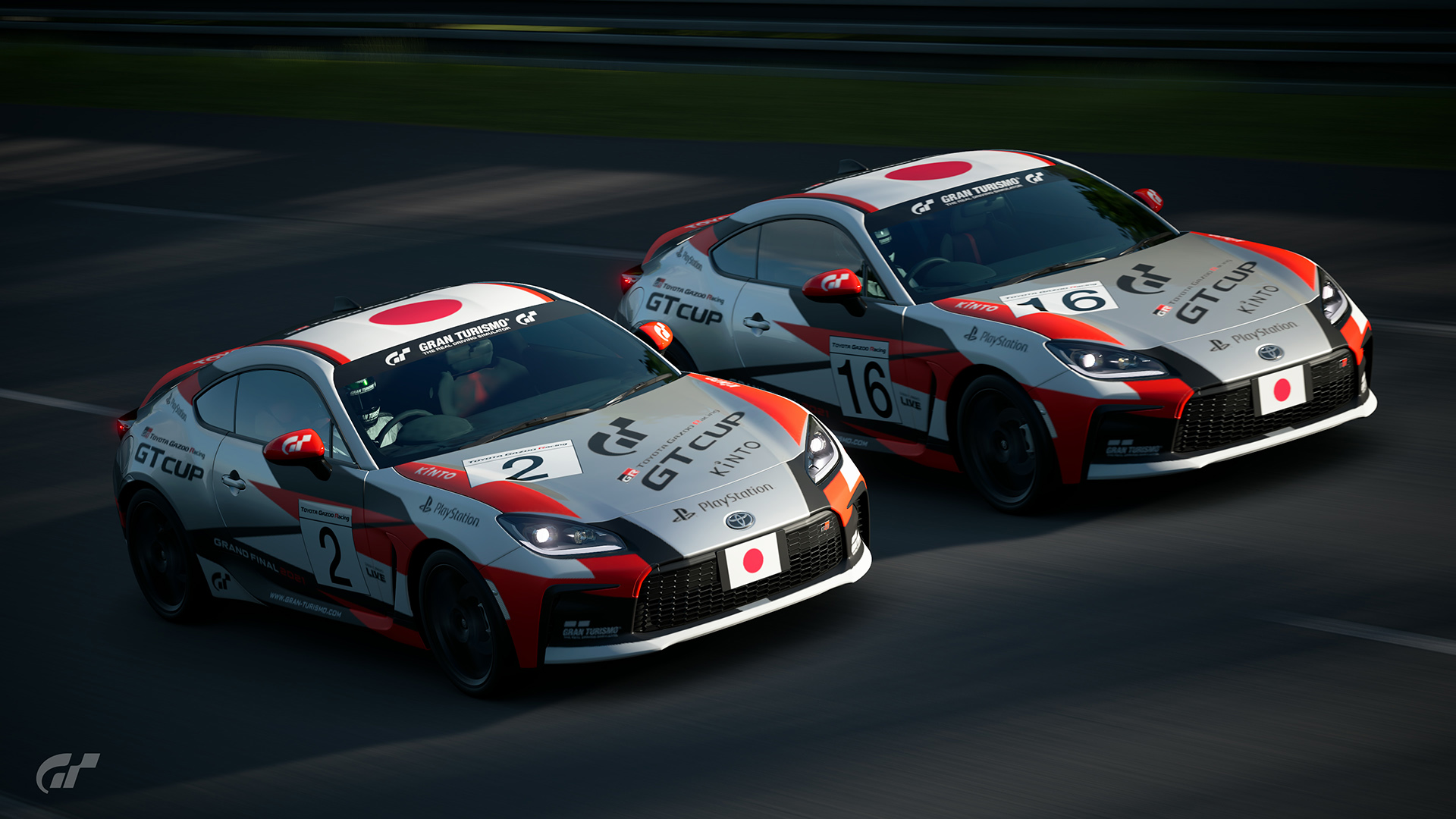 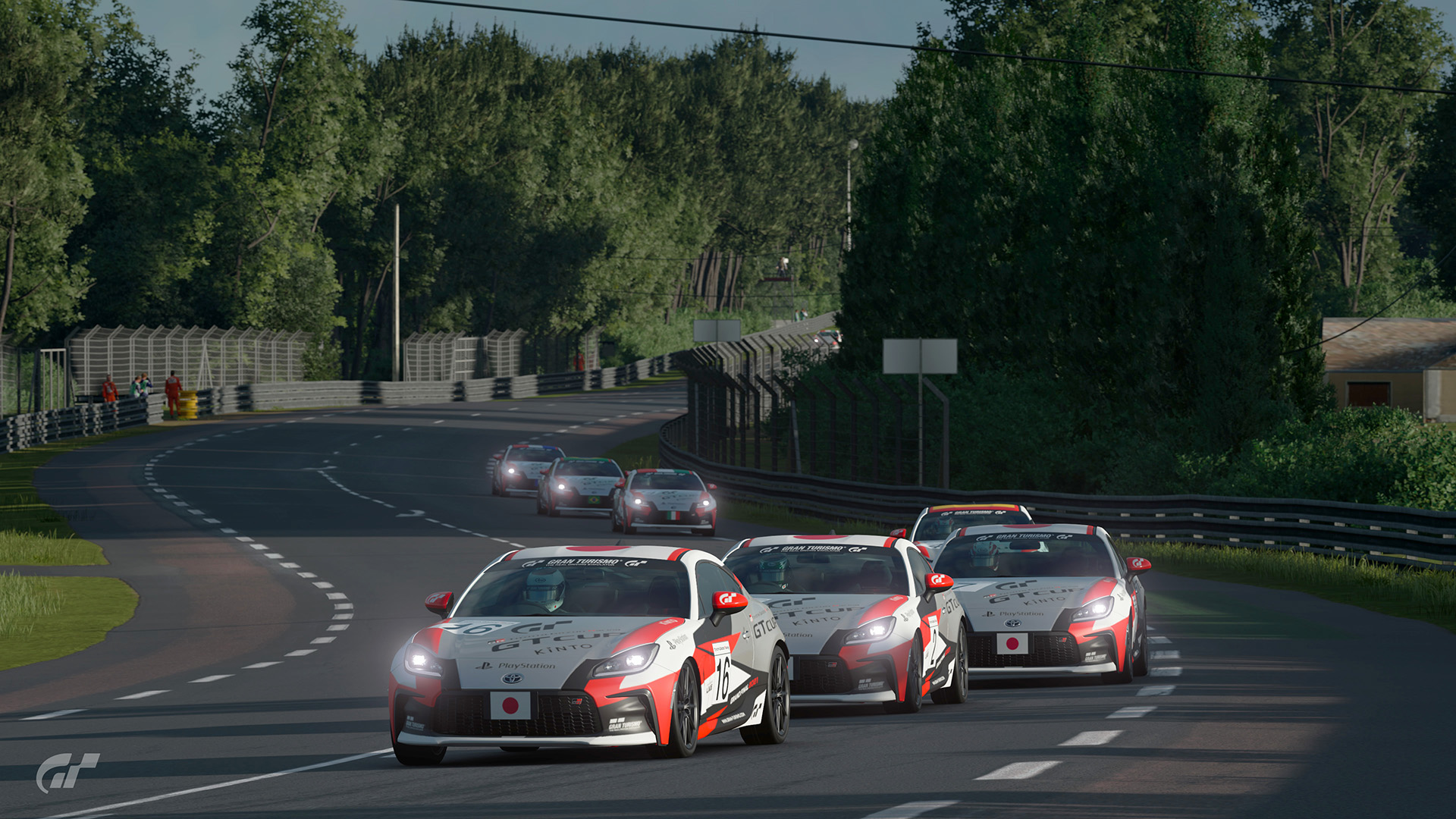 The end of lap 5 saw Gallo and Serrano finally pit. The viewers were on the edges of their seats to see if their strategy had paid off...but it did not. They re-entered the race in 6th and 7th place, respectively, handing the lead over to Miyazono. Now, with one-lap remaining, it was a mad dash to finish. The car of 2nd-place Yamanaka made his move at the start of the Mulsanne Straight, taking the lead away from Miyazono, who got it right back at the end of the straight. With only a few corners remaining in the race Tomoaki Yamanaka put everything on the line through the Indianapolis (Turn 11), successfully getting past Miyazono in a brilliant overtaking maneuver. And he never looked back, taking the checkered flag with an enthusiastic celebration. 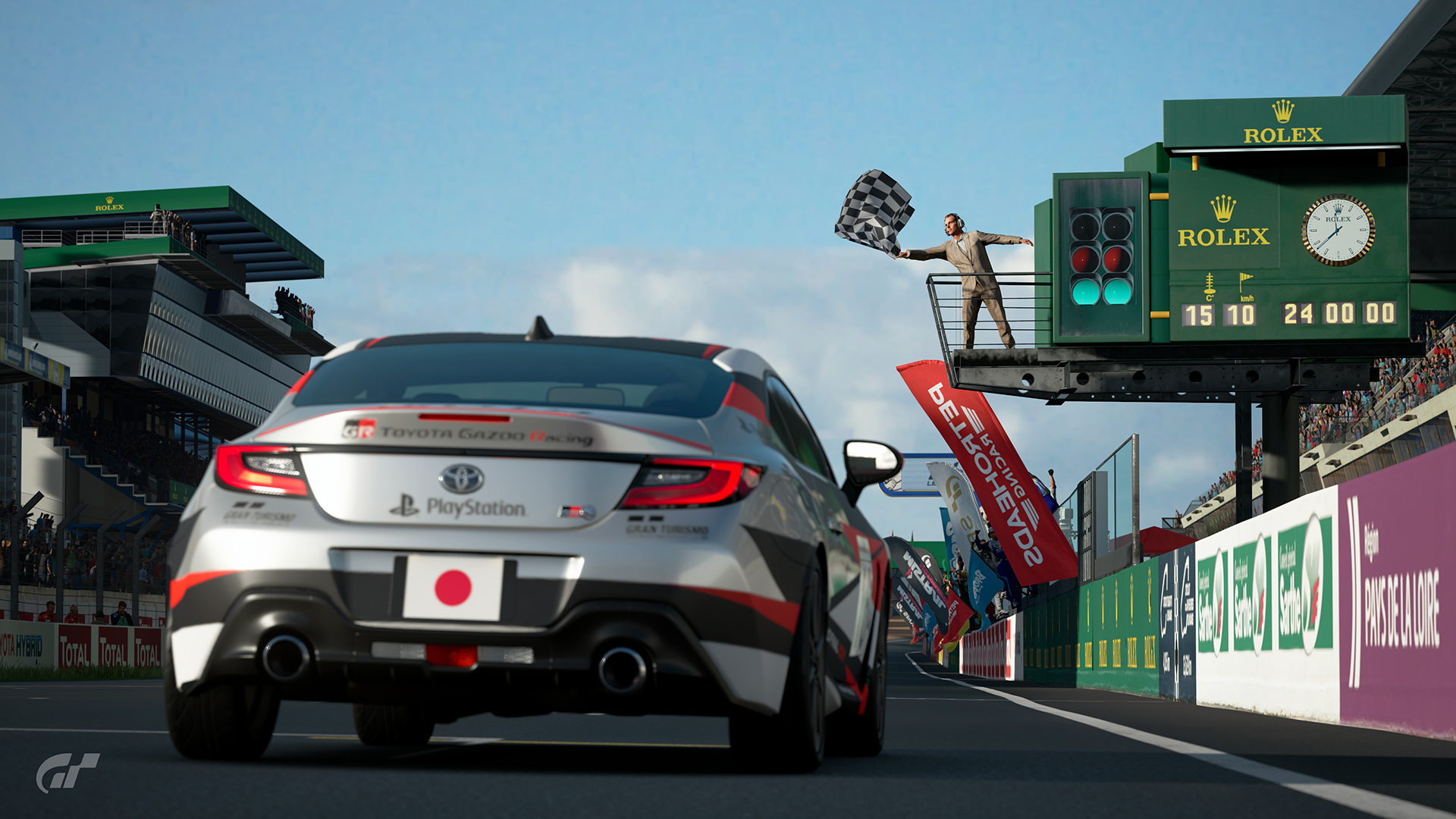 As for Takuma Miyazono, although he was beaten by a mere four-tenths of a second, he put in a brilliant performance nonetheless. Occupying the final spot on the podium was newcomer Rikuto Kobayashi, giving Japan a 1-2-3 finish in the 2021 TOYOTA GAZOO Racing GT Cup. 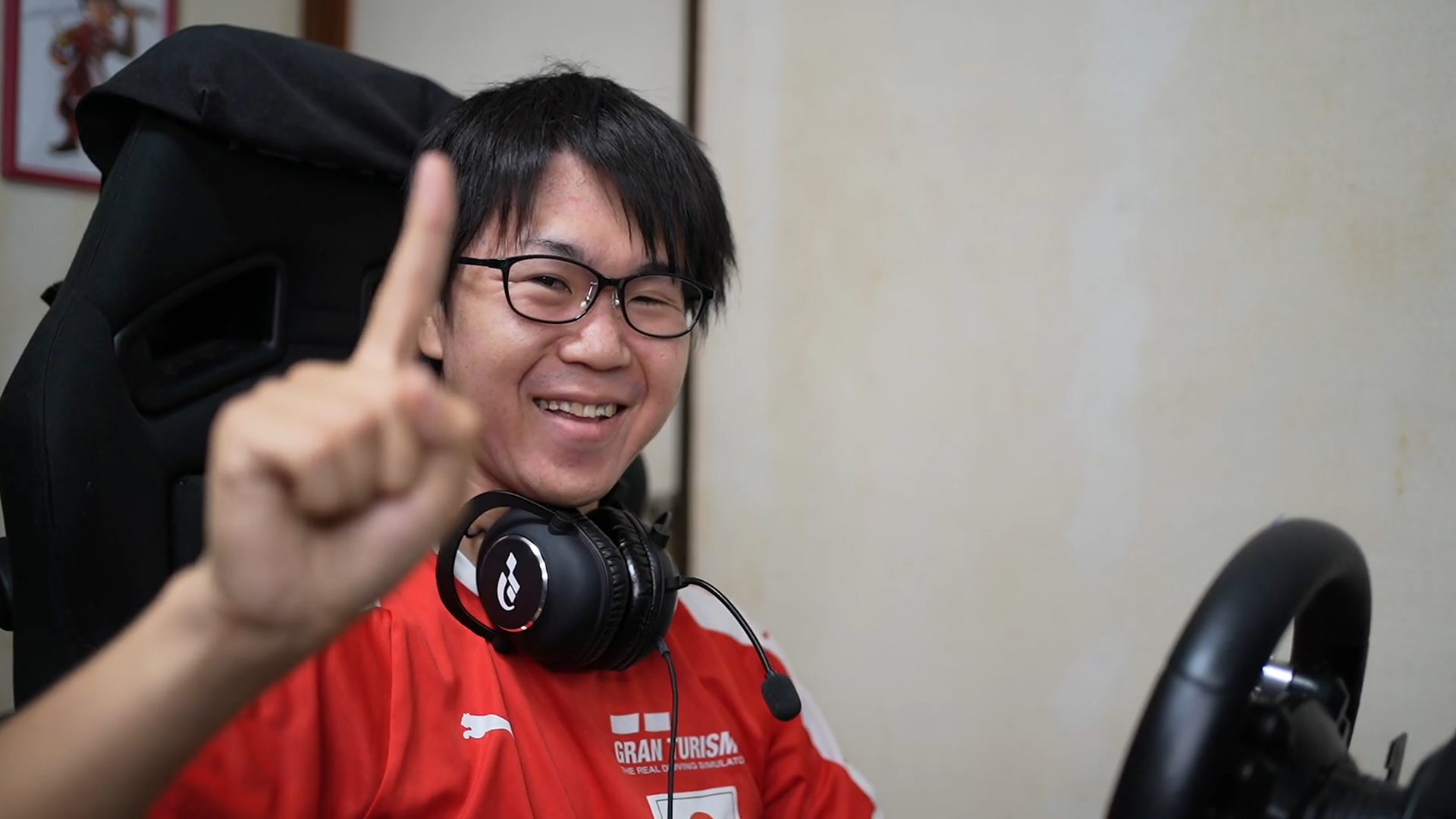 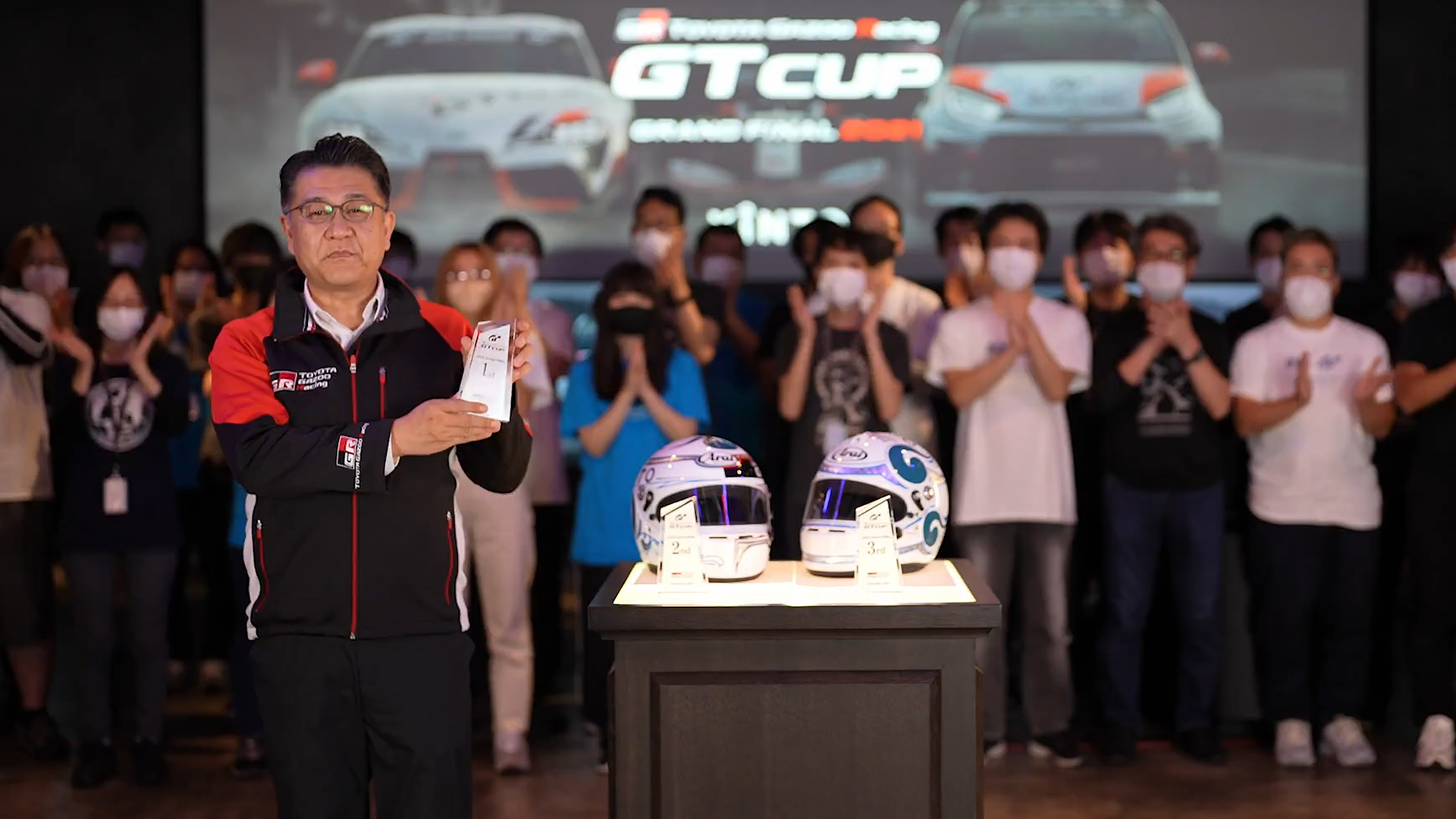 The TOYOTA GAZOO Racing GT Cup 2021 Finalists Have Been Announced!
The 24 finalists that will compete in the final round of the...
INFORMATION