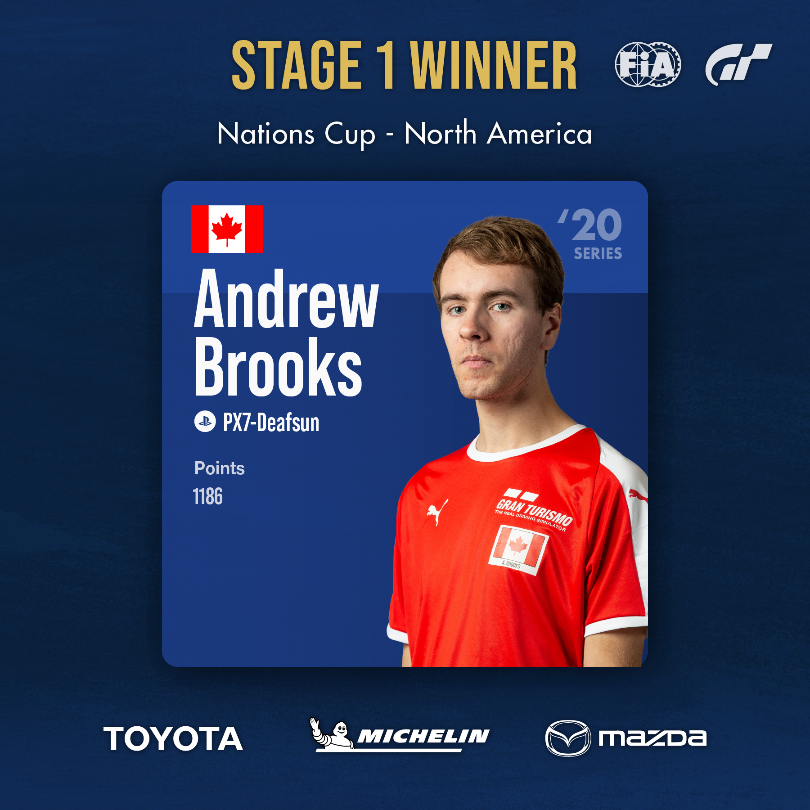 The first stage of the 2020 Nations Cup got underway on April 25th. It was widely expected to be a showdown between Canada's Brooks (PX7-Deafsun) and Solis of the USA (PX3-Lamb), but two other Americans, Haywood (TX_Originals) and Heck (VQS_Robert) crashed the party in grand style, giving the two favourites a real run for their money.

Brooks won Round 3, grabbing 392 points in the process, but a number of other drivers were also performing well and scoring comparably.

Brooks won again in Round 7, taking 406 points, but Haywood was right on his tail, grabbing 391 points to add to his own growing total.

The final race of Stage 1 featured Gr. 1 cars, and took place on the Circuit de Spa-Francorchamps.
Haywood showed his class during qualifying, grabbing a very impressive pole position. He was joined on the front row by his fellow American Heck, with Solis and Brooks taking third and fourth place respectively. Both front row drivers were in 2016 R18s, and had opted to start the race on soft tyres. The two drivers behind them, by contrast, were in 2011 R18s, and had opted for medium tyres. It therefore promised to be a fascinating contest between different cars and different strategies, and no one felt confident in predicting how it would turn out.

Haywood and Heck, both on soft tyres, immediately became embroiled in a fierce tussle for the lead. Neither of them had likely expected such a battle early on, and as it continued Solis and Brooks were able to close the take advantage and close the gap between them and the front two.

On the fourth lap, Heck's pace dropped, and Haywood surged ahead. On the sixth lap, both Solis and Brooks switched to soft tyres, while Heck and Haywood waited until the seventh and eighth laps respectively to make the switch to medium tyres. Solis took advantage of this to steal ahead of Heck and into second place.

After the first tyre change, a clear leading pack of four had been established: Haywood, Solis, Heck, and Brooks. However, Heck's chosen strategy of taking an early second pit stop meant that he soon fell behind this pack.

By the 13th lap, Haywood's inability to increase the pace on his medium tyres meant that Solis had caught up with him, and was right on his tail.

The top three all took a pit stop on the 15th lap, with the final lap looming, and they emerged from the pit lane in the same positions that they'd entered. A one-lap super sprint battle on hard tyres looked set to ensue. Haywood's decision to pair hard compound tyres with his hybrid power engine paid off handsomely, as he streaked ahead of his rivals towards the finishing line. Both Solis and Brooks were in R18s that were not equipped with hybrid power, and paid the price accordingly. It was a spectacular victory for Haywood over his storied rivals.

Haywood's heroics weren't enough to topple Brooks from top spot, however, with the latter's consistently high scores ensuring that he topped the stage, with Haywood ending up in second place overall.

Haywood had already showed his class for BMW in the Manufacturer's Series, but here he showed that he could also do it on the level playing field of the Nations Cup, nearly taking the crown from the champion Brooks. He is, without doubt, one to keep an eye on!