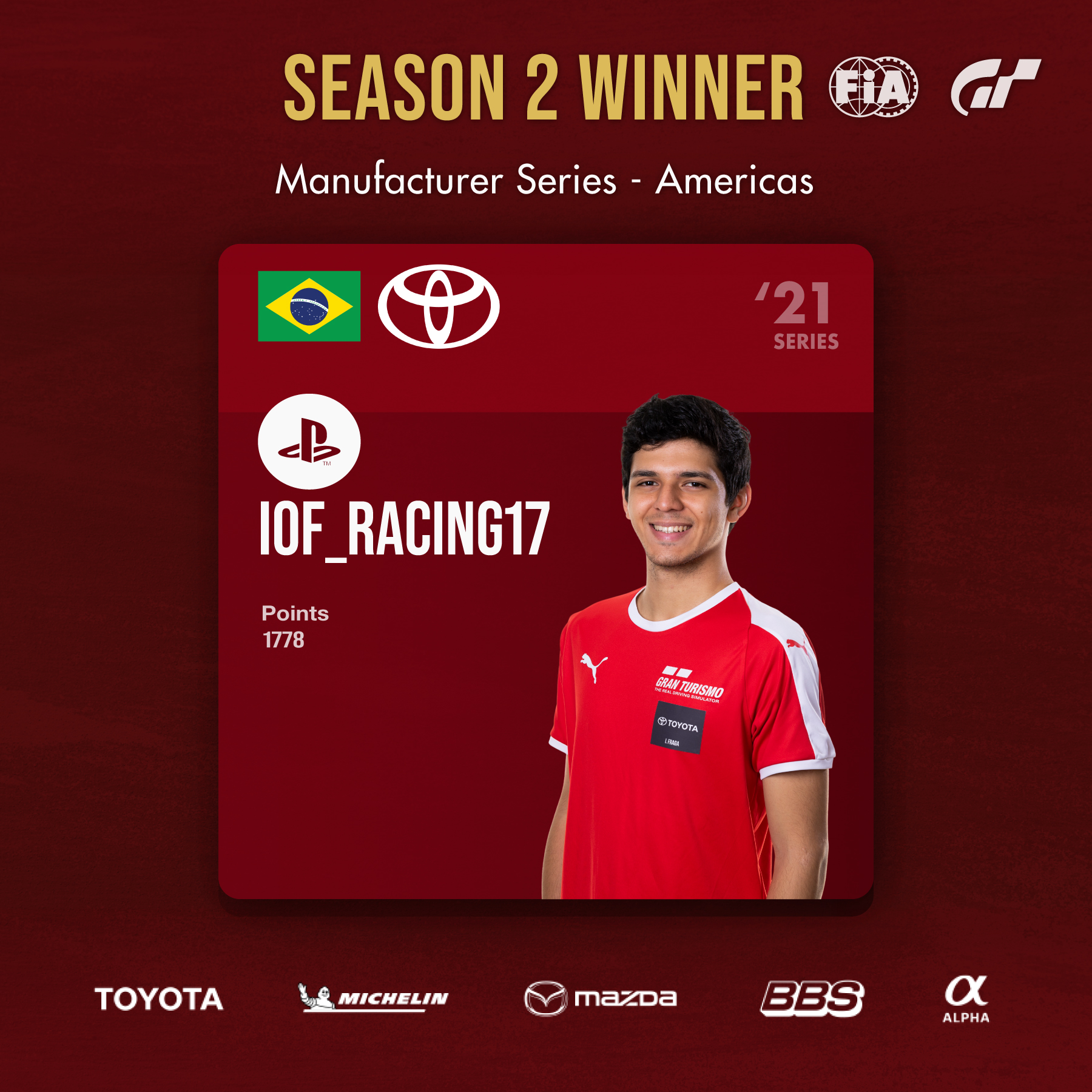 The FIA GT Manufacturer Series Season 2 got underway on July7th, and featured a total of ten races. The first round, a Gr.4 race, took place at Interlagos,and the grid was packed with talented drivers.

Pole position was claimed by Toyota's Brazlian ace IOF_RACING17. He would remain in first place for several laps, but by the ninth his lead had been cut down to four seconds by his fellow Toyota driver KoA_Didico15, who was operating on fresh tyres.

KoA_Didico15 kept up the pressure, and finally caught up with IOF_RACING17 with just two laps remaining. It was a closely fought but very fair battle between the Toyota teammates and fellow Brazilians. IOF_RACING17 defended his lead valiantly, but KoA_Didico15 eventually got the better of him on the very last lap—a dramatic turnaround that earned KoA_Didico15 445 points.

KoA_Didico15's stirring performance in Round 1 seemed to inspire him, and in Round 2 he went pole-to-win, scoring heavily to get his season off to the perfect start.

IOF_RACING17 came back with a vengeance in Round 3, going pole-to-win and grabbing a massive 457 points—enough to see him move up to first place.

IOF_RACING17 outscored KoA_Didico15 in Round 4 as well, but there were only eight points between them heading into Round 5, and the tussle between the Toyotas looked set to heat up even further in the second half of the season.

KoA_Didico15 struggled to recreate his early-season form in the races that followed, however, and failed to score any points in Rounds 5-8.

His misfortune was compounded by the fact that IOF_RACING17 earned a very decent 439 points in Round 8.

Round 9 was a head-to-head showdown, and KoA_Didico15 got off to a poor start, receiving a 0.5s penalty for having all four wheels off the track. As luck would have, it however, IOF_RACING17 would go on to do exactly the same on the final lap, earning himself a 0.5s penalty as well.

IOF_RACING17's penalty was actually far worse, since it happened so close to the end of the race. This meant that he wasn't able to serve the penalty in a penalty zone before crossing the finish line, which incurred a further time penalty and allowed KoA_Didico15 to win the race.

The two Toyotas had scored heavily throughout the season, however, and only five points separated them going into the final race.

Both drivers entered multiple slots in order to find a matching that would earn them the most points. KoA_Didico15 entered and won a race, but because the number of points he earned were not sufficient to catch IOF_RACING17, he immediately tried again.

He would actually go on to win several times, but couldn't quite do enough to turn the tables at the top of the leaderboard, and IOF_RACING17 was able to claim the season title.
Season 2 had been a closely fought battle between two supremely talented drivers from the off, and the tense ending to the season was a fitting finale.