With just a few thousand points separating the top ten drivers in the Americas Nations Cup standings for the all-important Final Season of the "2018 FIA Gran Turismo Championships," the atmosphere was electric at the start of the penultimate Top 24 Superstars. IOF_RACING17 from Brazil was the driver to beat, as he entered the Nations Cup race with 13,700 points that led the overall championship.

The Circuit de Sainte-Croix - A, created from the imagination of Polyphony, was the scene for the Nations Cup showdown. This track, located in the South of France, stretched for 9.5 km (almost 6 miles), making race strategy and fuel management vital, even for a 10-lap race. Would drivers risk a one-stop strategy to save time in the pits?

To set the starting grid for the race, the competitors first had to qualify. With only 15 minutes to run and one lap taking nearly three minutes, there was very little room for error. Driver error, which led to aborted laps, saw several drivers struggle to set a time, but it was FT_LLOYDZELITE from Canada who won the day to secure pole position with a 2:45.252 qualifying time in the Nissan Motul Autech GT-R. Meanwhile, IOF_RACING17 couldn't seem to find his rhythm, finishing the session in 12th place. 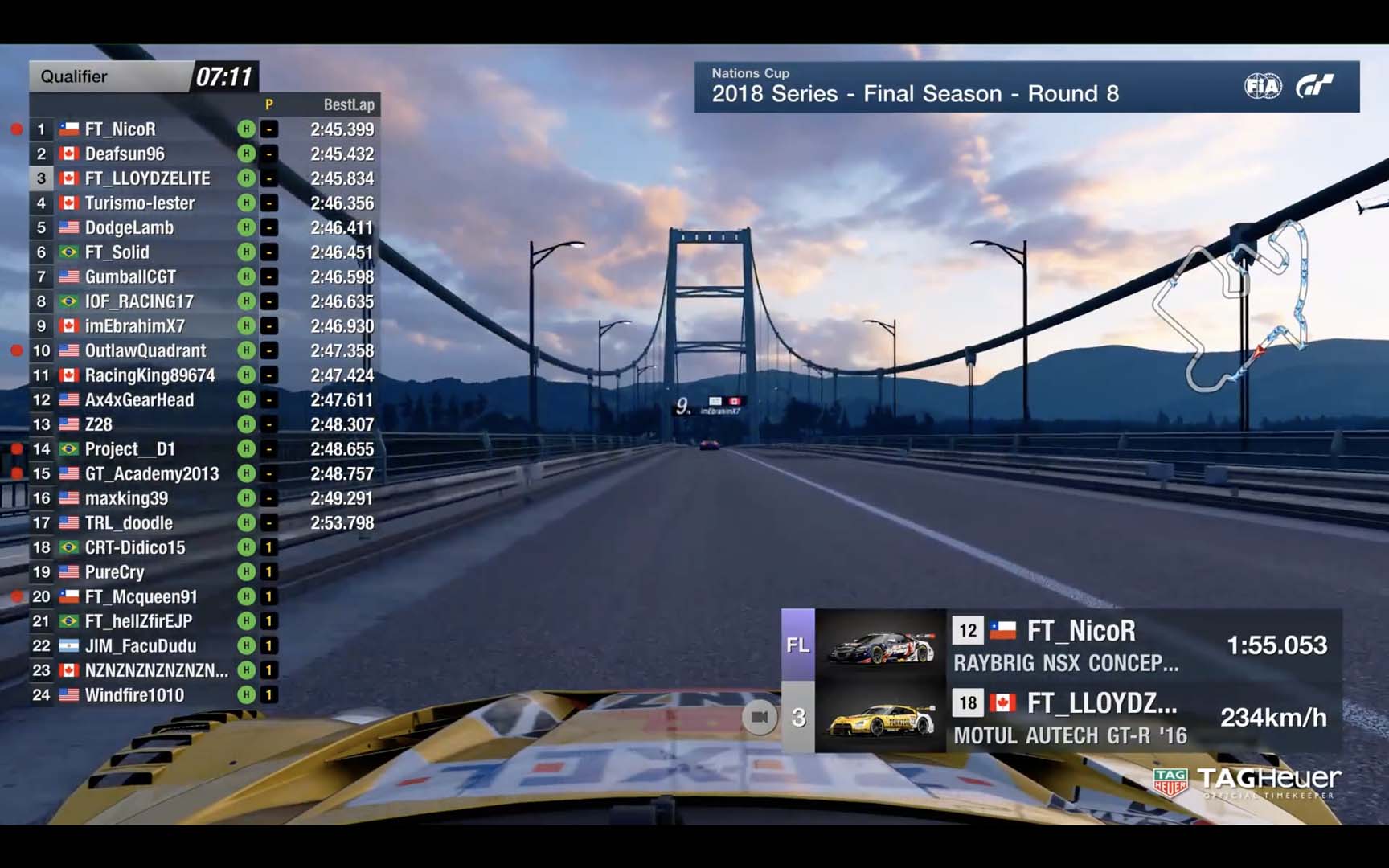 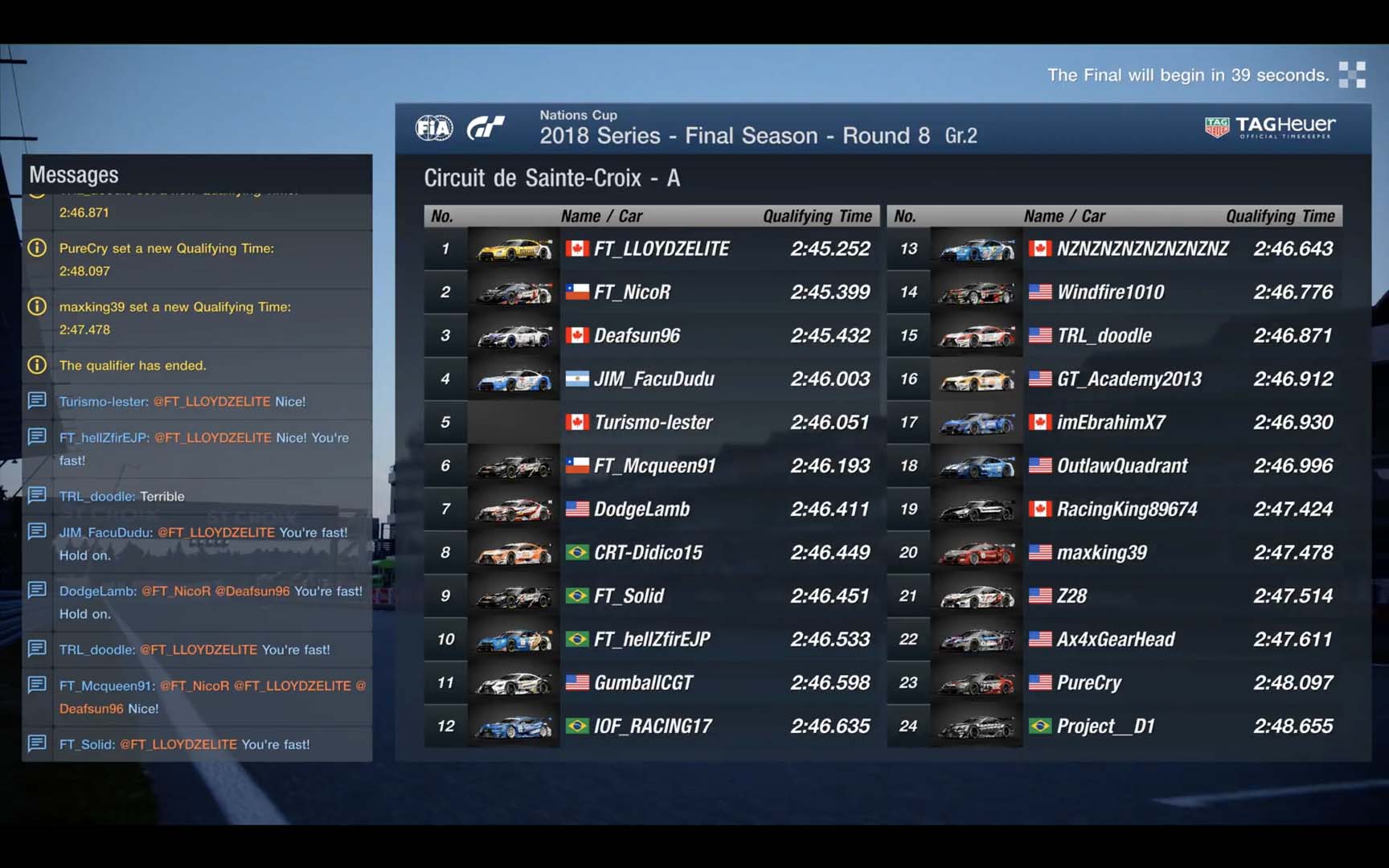 Also in the mix was the always-aggressive FT_Mcqueen91, along with several others. 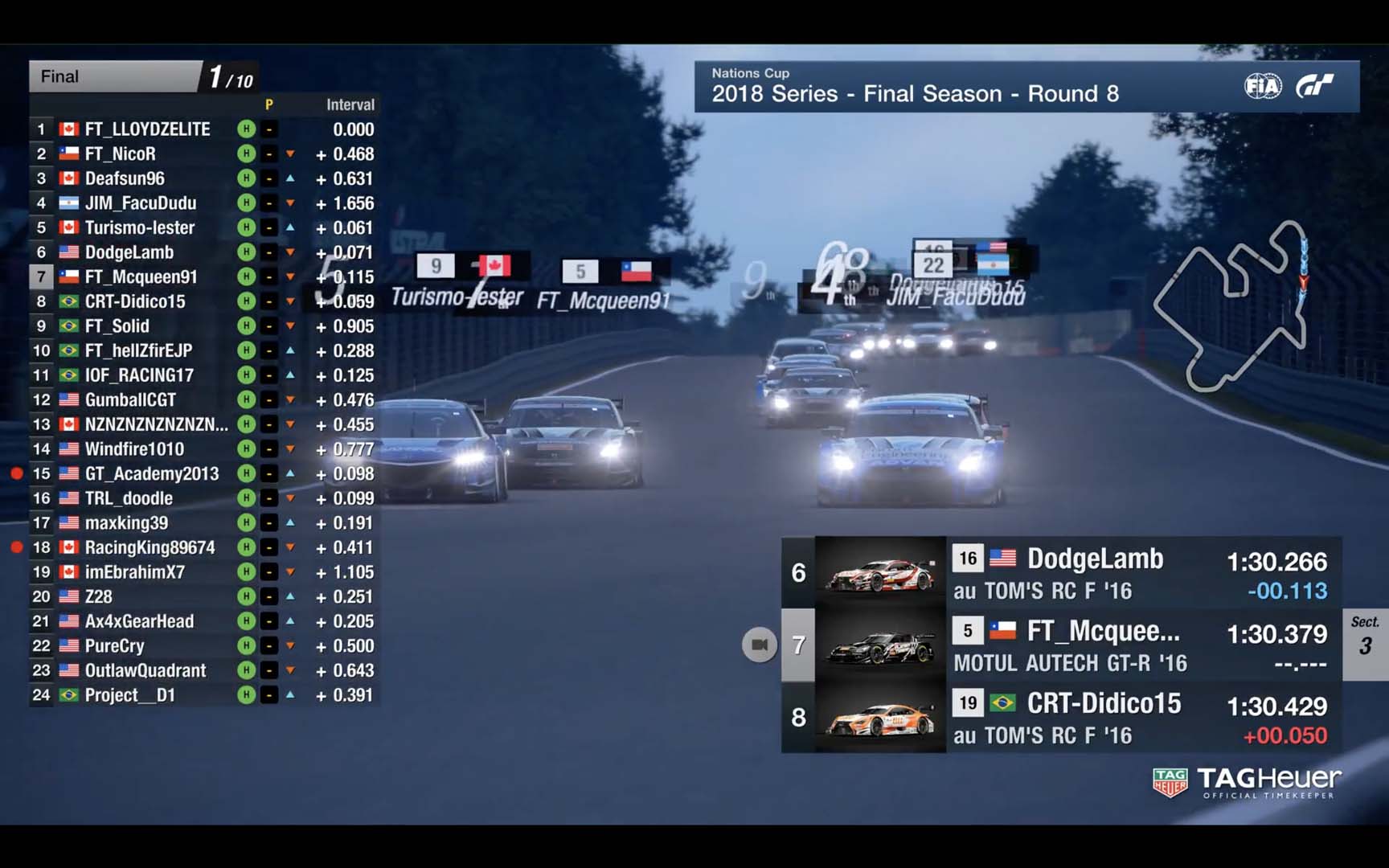 With just two tenths of a second separating FT_LLOYDZELITE, FT_NicoR of Chile and Canada’s Deafsun96, it was evident that there was going to be an intense battle at the front when the green flag dropped. The rolling start helped FT_LLOYDZELITE to pull away a bit as the rest of the field followed suit. Turismo-lester (Canada) took the initiative, going for a pass on JIM_FacuDudu (Argentina), but the two touched, forcing them to back off to keep their cars on the track. 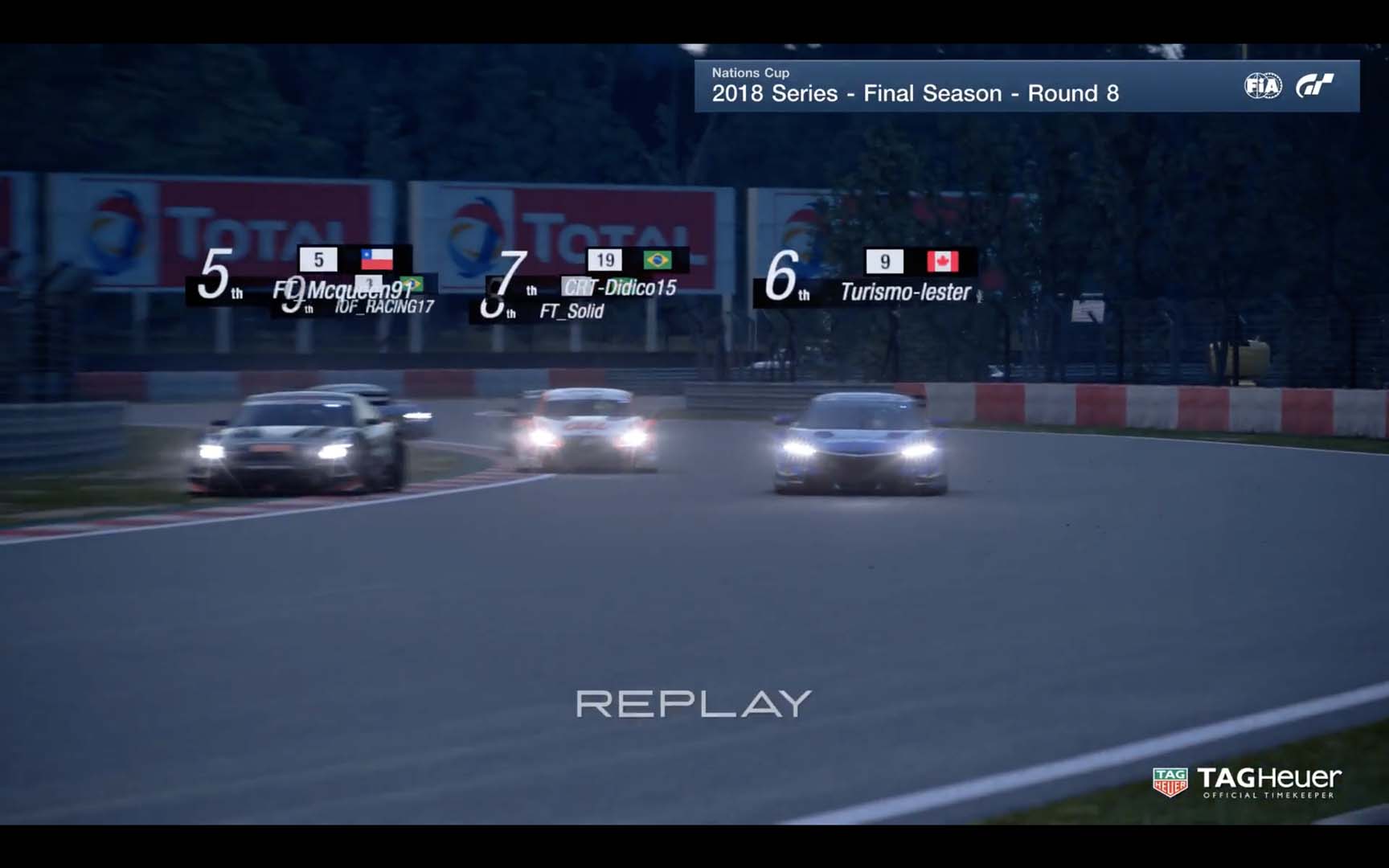 FT_NicoR put a much cleaner move on FT_LLOYDZELITE, taking the lead, and putting himself ahead of his two Canadian rivals. The leaders, FT-NicoR, FT_LLOYDZELITE and Deafsun96, remained out on the track as the first wave of pit stops came and went. On the fourth lap, FT_NicoR and Deafsun96 came in, while FT_LLOYDZELITE elected to stay out longer. The early pit stop dropped FT_NicoR to seventh, as Turismo-lester and FT_Solid (Brazil) were now chasing the leader.

From the 12th position, IOF_RACING17 made his way gradually up the field, and by the fourth lap, he had a firm hold of seventh place. But then, the unthinkable happened as the Brazilian picked up a penalty and dropped back down to 14th place, his dreams of a top five finish seemingly over. 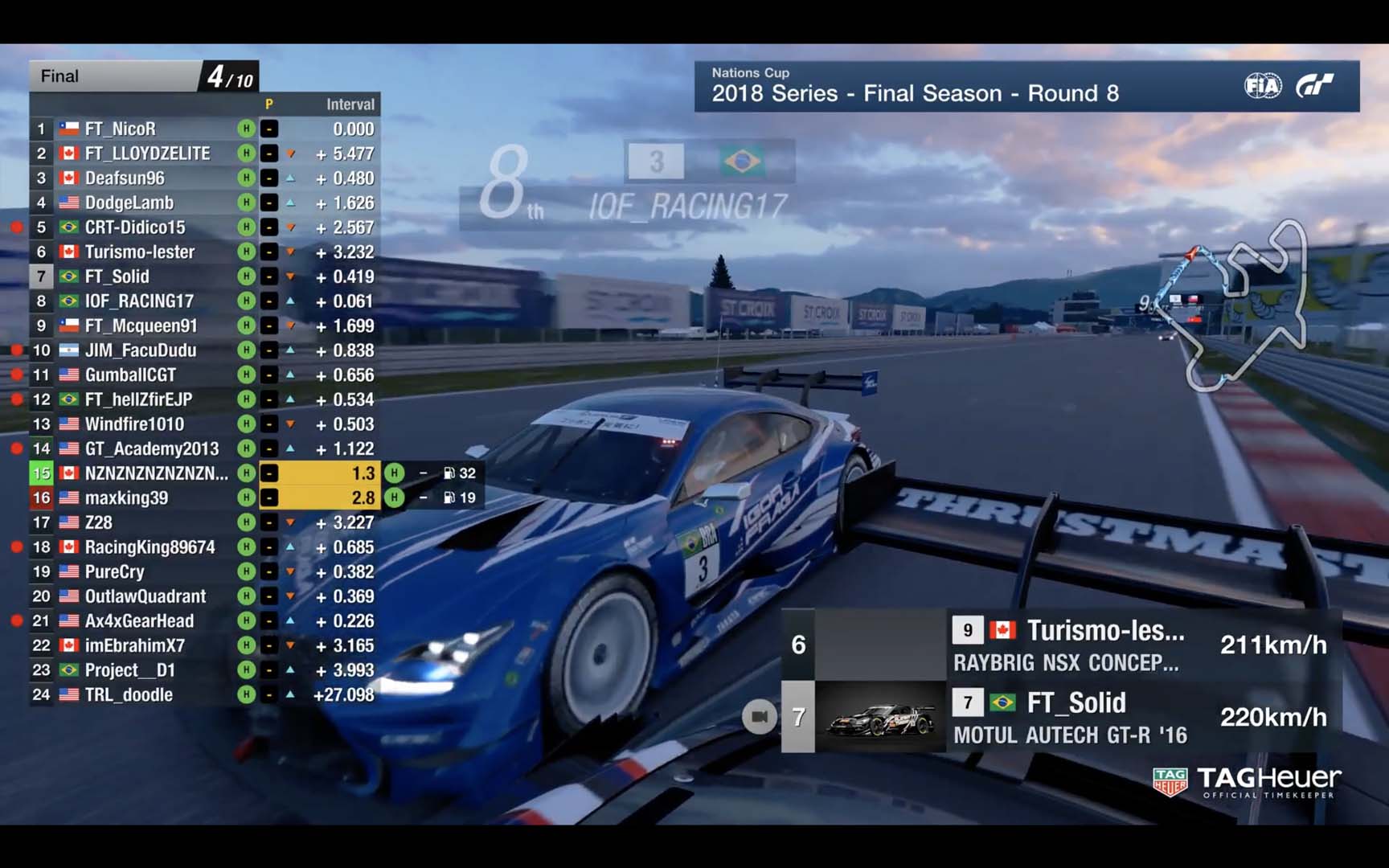 Most of the other drivers pitted the following lap, as FT_LLOYDZELITE returned to the race in fifth, giving the lead back to FT_NicoR, who ran in front of DodgeLamb (USA) and CRT-Didico15 (Brazil). The battle behind the leader turned intense as a mere three seconds separated four cars. It was a game of cat and mouse as the competitors balanced saving fuel and tires with attacking the track.

A second round of pit stops dropped FT_NicoR to second while FT_LLOYDZELITE stayed out. It was now the Canadian who sat in front with a three-second cushion. But, the Honda Raybrig NSX immediately began to close in on FT_LLOYDZELITE, gaining over a second in just half a lap. As the penultimate lap began, FT_LLOYDZELITE struggled to gain grip on his worn tires as FT_NicoR’s car filled his rear-view mirror, but FT_LLOYDZELITE refused to yield. The two teammates nudged each other as they sped down the straight. Then FT_NicoR made a move, retook the lead, and pulled away. 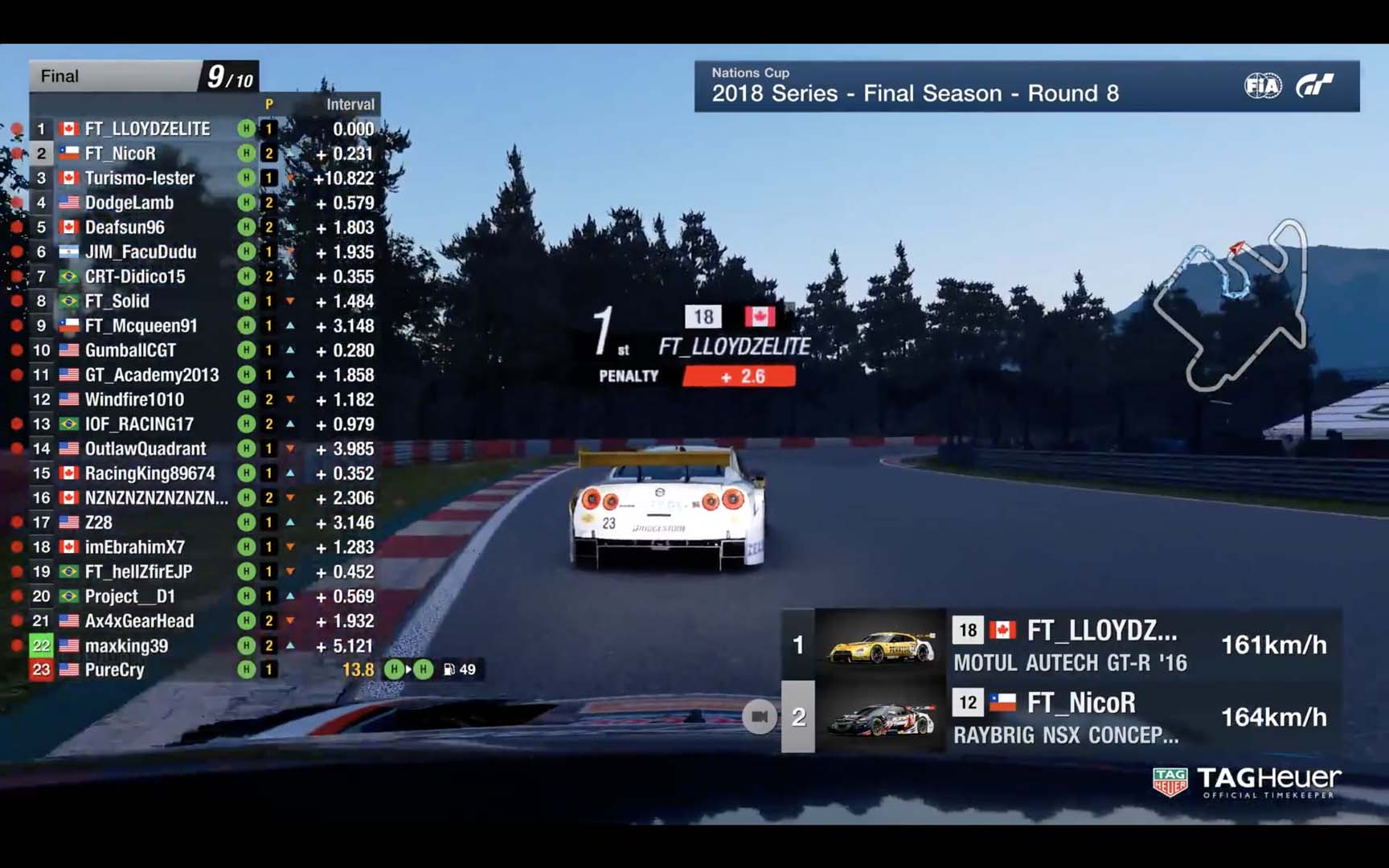 Chile’s FT_NicoR crossed the line five seconds clear of FT_LLOYDZELITE, his two-stop strategy working perfectly. With 4,195 points, FT_NicoR sits comfortably in the top three with just two rounds, including a Superstar round, remaining in the season.

A tense battle had DodgeLamb looking certain to take third, but a late charge from Deafsun96 forced the American to dig deep in the last lap to hold his position. 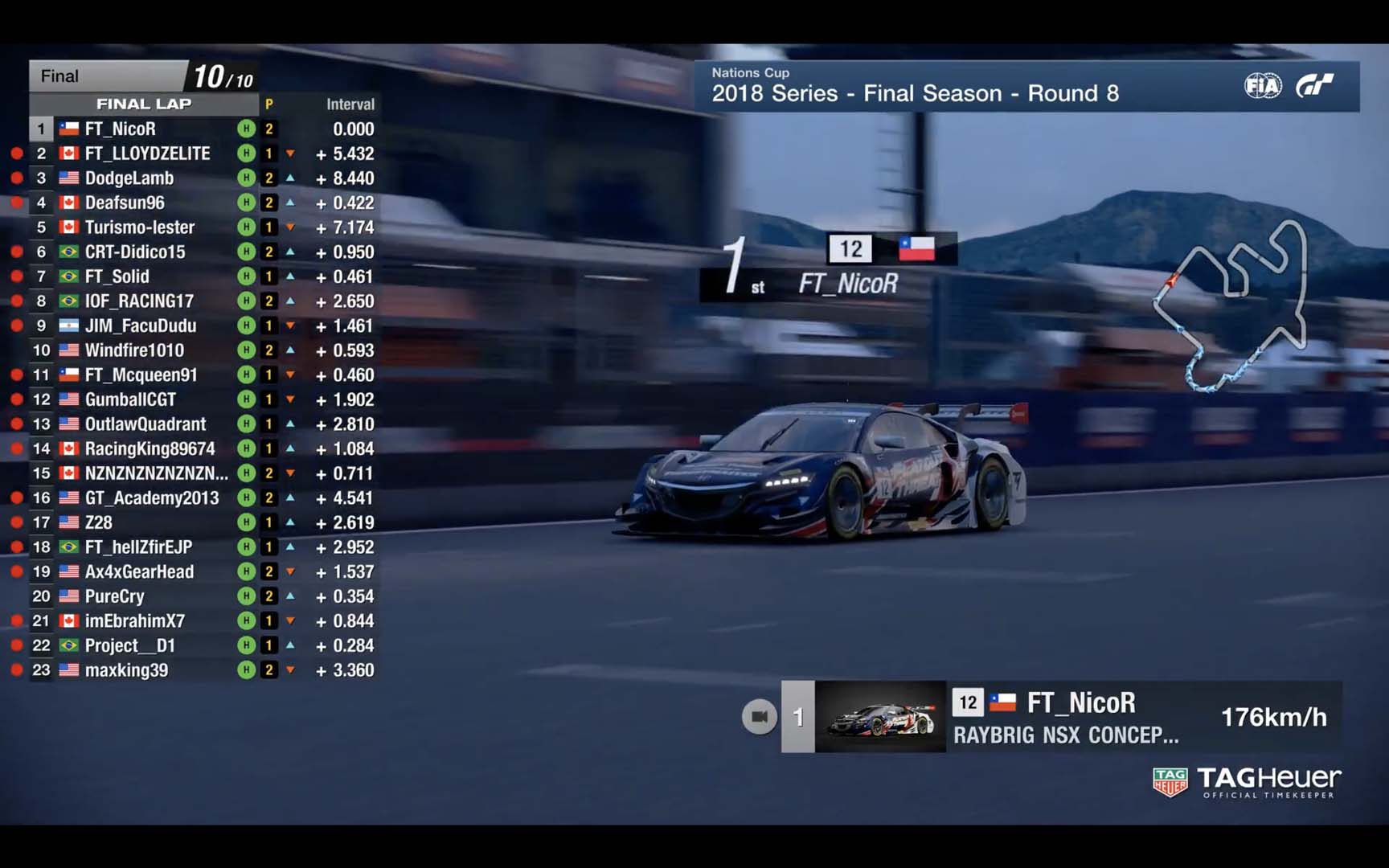 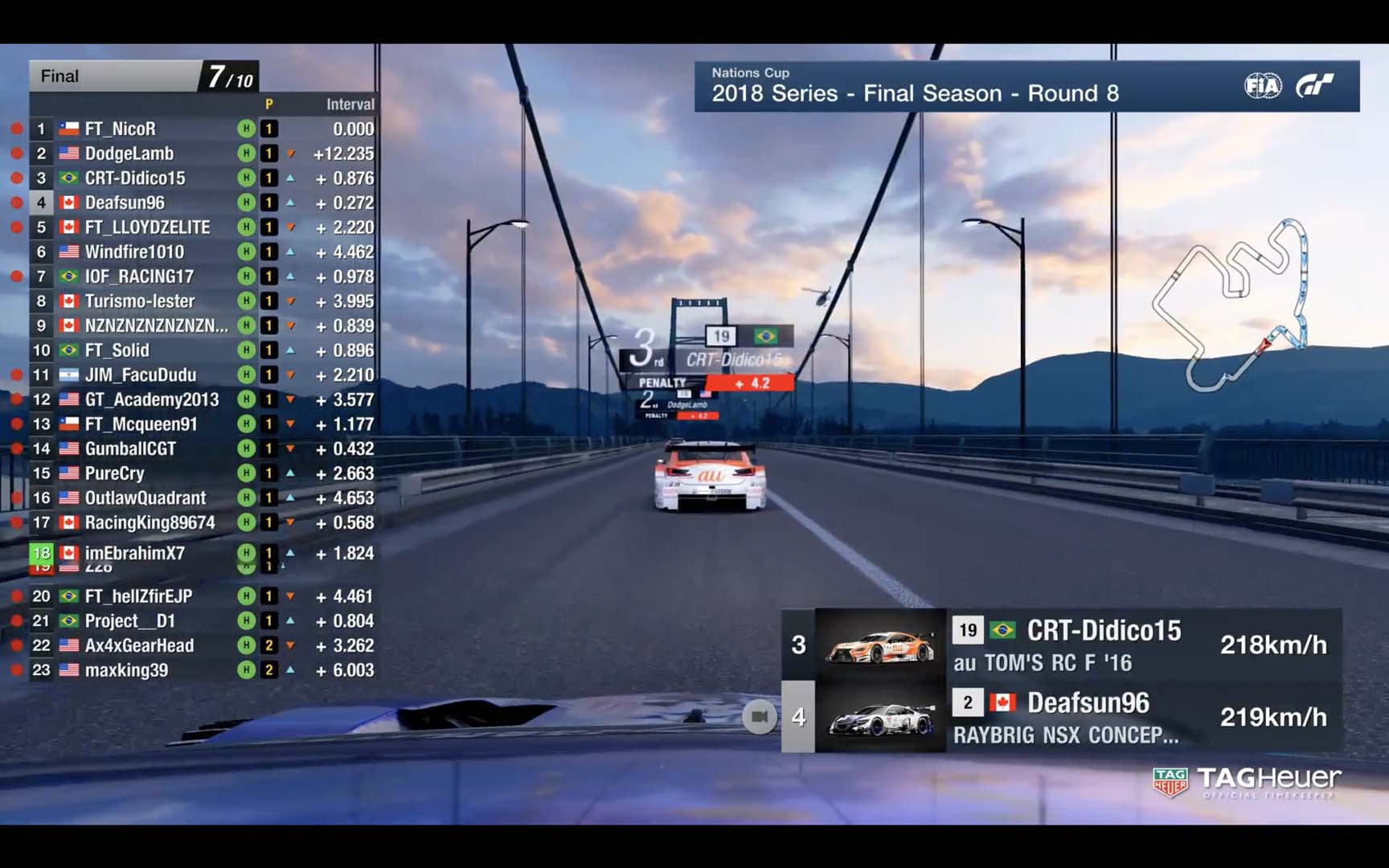 Deafsun96 and Turismo-lester made it three Canadians in the top five, with Deafsun96 missing the podium by under two tenths of a second.

CRT-Didico15, FT_Solid, IOF_RACING17, Windfire1010 and JIM_FacuDudu made up the rest of the top ten of this exciting Nations Cup race. 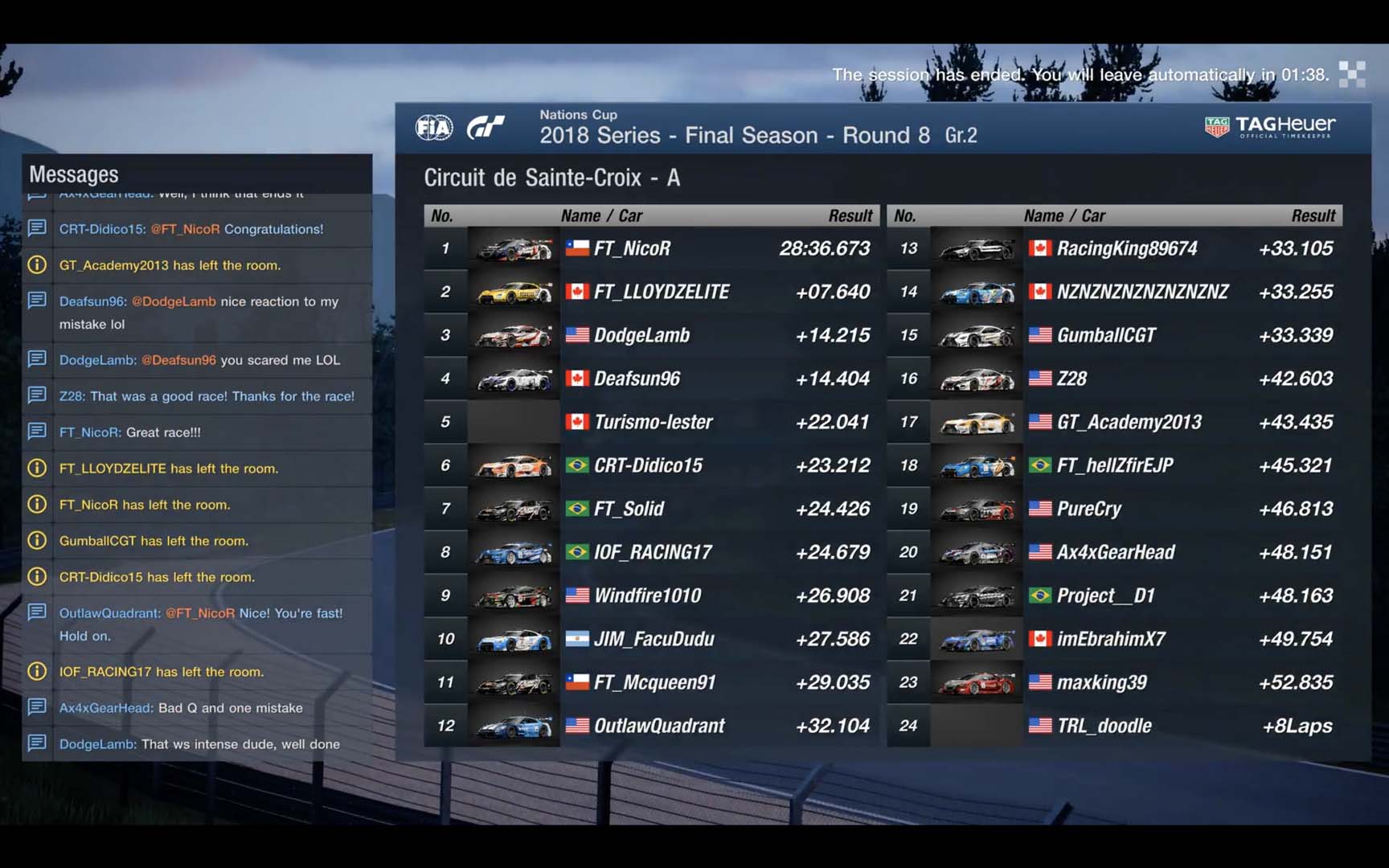