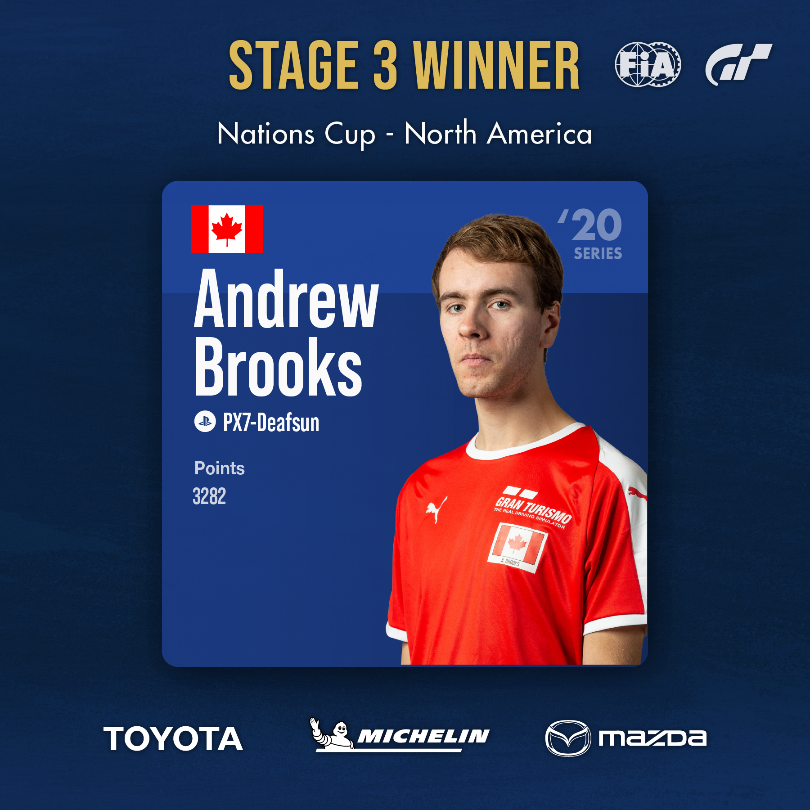 The third stage of the 2020 Nations Cup began on July 7. Canada's Andrew Brooks (PX7-Deafsun) started the stage in 1st place—an exact repeat of the Manufacturer Series. Brooks was further aided by the fact that his closest rival, USA's Randall Haywood (TX3_Originals), struggled in the third stage, failing to outscore the Canadian in any race.

Haywood's fellow American driver Daniel Solis (PX7-Lamb) fared better, going head-to-head with Brooks in Round 24 and getting the better of him there, scoring 449 points. But an unfortunate network error resulted in him scoring zero points in Round 28.

Despite not winning Round 24, Brooks did manage to take in 400 points in that contest, a feat he repeated in Round 28 to consolidate his position at the top of the rankings.

The final race of Stage 3 on the Sardegna Road Track in X2019 Competition cars saw Brooks in pole position, with Solis right behind. The second race favorite, Haywood, started way back in 7th.

A fierce battle for 2nd place allowed Brooks to open up a considerable lead at the start of the race, which he would not relinquish. By Lap 4, Solis' pace began to drop, and he was overtaken by Tristan Bayless (roadbeef) and Robert Heck (R_Heck), dropping him down to 4th place. With their eye on the race leader, Bayless and Heck charged hard, and dove into the pits for their first tire changes on Lap 8, while Brooks, who had already built up a 10-sec. lead, pitted a lap later.

On Lap 15, the top three drivers (Brooks, Bayless, and Heck) all made their second pit stops, then two laps later, Bayless drove into Dean Heldt (VLX_Deano), which resulted in a five-second penalty that dropped down to 4th place. All the while Brooks drove flawlessly, building up a staggering 17-sec. cushion by the final lap. He made his last mandatory tire change without a worry in the world, and crossing the finish line with time to spare.

It was a truly dominant performance from Brooks; his pole-to-win victory was the perfect way to cap a great 2020 series. The win also secured secure him a place in the Nations Cup for the second straight year.

Brooks has his share of heartbreaks in the past, including in the last Word Tour; however, if he can keep up the cool-headed driving that he displayed this season, he is bound to be a serious contender.