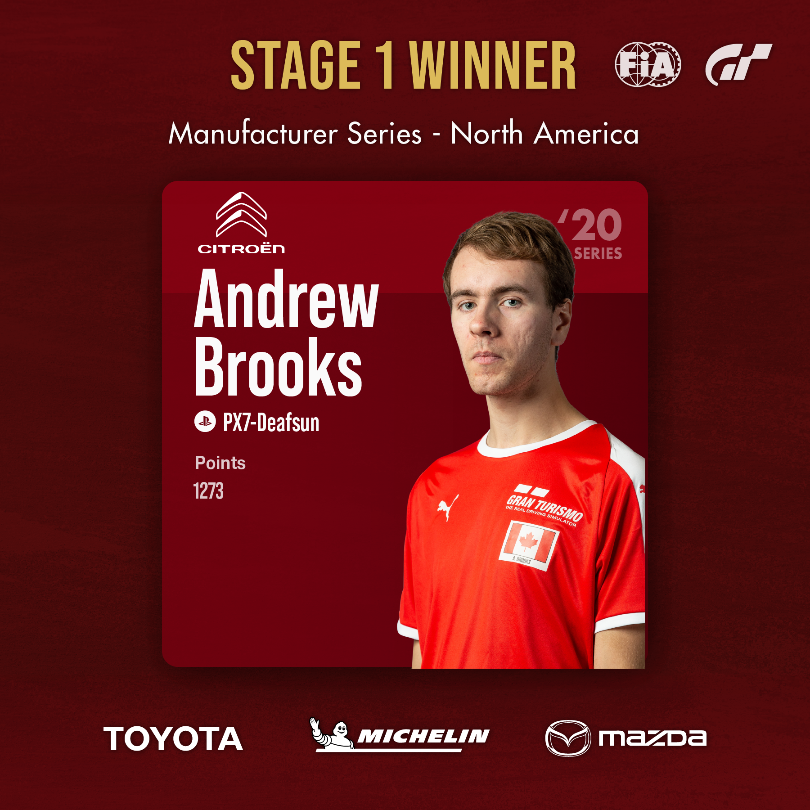 Citroen's Brooks (PX7-Deafsun)—the undisputed king of North American racing in recent years—struggled in the early rounds but recovered in Round 3, taking the top score of 421 points. The battle for first place intensified from that point on, with Subaru's Solis (PX3-Lamb) refusing to let Brooks get the better of him. Indeed, the 438 points that Solis took in Round 7 saw him open up a decent lead over his rival.

Solis and Brooks would continue to score heavily in the following rounds as well, ensuring that all eyes were on the top two heading into the final race.

The final race of Stage 1 featured Gr. 3 cars, and took place at Interlagos.

Brooks, newly transferred to Citroen, lived up to expectations by claiming pole position. Toyota's Aghakhan (TRC Stagger), who had roared into life in the latter half of the stage, scoring heavily, started in second place. The much-anticipated showdown between Solis and Brooks did not materialise, however, with the former not making an appearance in the Top 16 Superstars race.

The top two opted to start on soft tyres, and took full advantage of this to build up a lead on the chasing pack. On the ninth lap, the second-placed Aghakhan took a pit stop, and changed to medium tyres. Brooks, however, waited until the tenth lap to take his. These pit stops would prove decisive, as Brooks emerged from them with a five-second lead over Aghakhan.

It didn't look like anyone could catch Brooks's Citroen. In fact, Aghakhan was struggling badly on his medium tyres, and soon found himself overtaken by a dark horse in the form of Lamborghini's Troncoso.

Brooks, in the meantime, continued to build up his lead, ending in complete control with a 6.8 second gap between him and his nearest rival. Having suffered a great deal of bad luck in the World Tour, Brooks delivered a stable, intensely focused performance throughout the online events, claiming an extremely impressive first stage win in both the Nations Cup and the Manufacturer's Series.

The first stage may have ended with yet another win for the champion, but a number of new challengers also caught the eye. Porsche's Beck (VQS_Robert) may have ended the stage down in sixth place, but he drove wonderfully in the early rounds, and is sure to pose a threat to the top drivers in the upcoming stages. BMW's Haywood and Hyundai's Pounder also continued their good form from the World Tour, and showed that they have made excellent progress, developing into serious contenders.