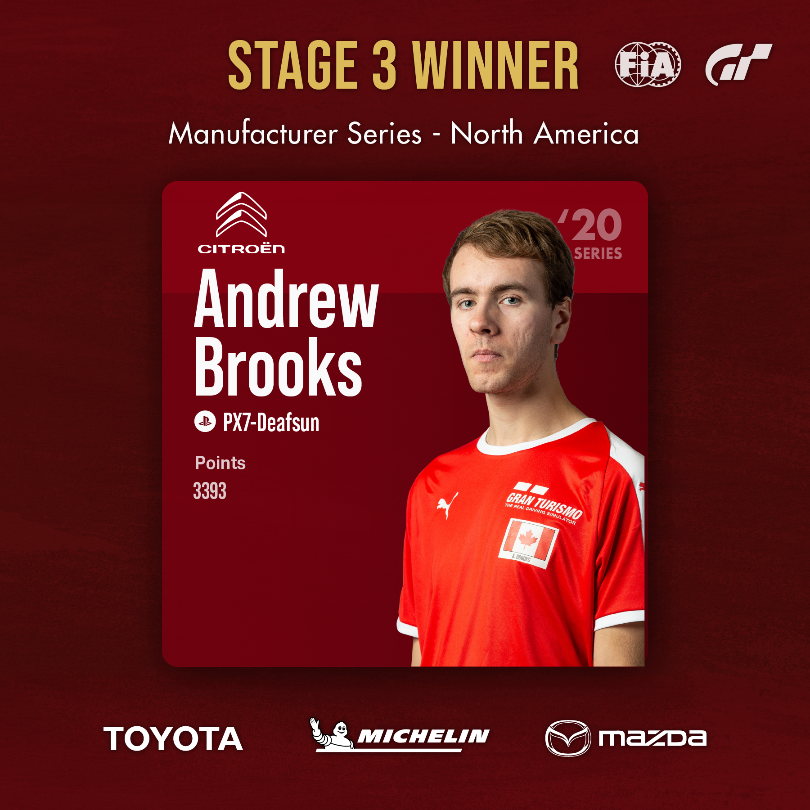 The third stage of the 2020 Nations Cup began on July 7. Citroën's Andrew Brooks (PX7-Deafsun) ended the second stage in 1st place, but Dodge's Jeff Gallan (R8G_LLOYDZELITE), who had been enjoying a wonderful return to form, was pushing hard for the top spot. Brooks failed to pick up any more points, while Gallan scored points in Rounds 24, 27, and 28 to pile on the pressure on the leader.

The final race of Stage 3 on the Tokyo Expressway and featuring Gr. 3 cars saw Toyota's veteran driver Armen Aghakhan (TX3_Stagger) on pole, with Brooks in the second position on the grid. Gallan started 6th.

As soon as the green flag dropped, Brooks was on Aghakhan's tail, and passed him for the race lead on the second lap of Lap 2. Meanwhile, Gallan was expertly navigating the Tokyo Expressway -- a very narrow track with very little space to overtake -- to catch up with the lead drivers. On Lap 3, a fierce battle between Daniel Solis and Aghakhan allowed Gallan to squeeze past them both to move into 2nd place. However, Gallan failed to make up ground on Brooks, who had built up a commanding cushion. Gallan had problems of his own as Daniel Solis, who had conserved fuel up to this point, was all over the Dodge.

On Lap 7, Gallan pitted, while Brooks, Solis and Aghakhan followed suit two laps later. Then Brooks found himself another challenger, when Hyundai's Kevan Pounder (PX7-Windfire), who had opted for a no-pit strategy, came from nowhere to take the race lead. This caused Brooks' lead over the pack to all but disappear. Still, Brooks kept charging and eventually overtook Pounder on Lap 11. Pounder ended up slowing down Gallan and the others, allowing Brooks to build up a three-second lead.

On Lap 16, Aghakhan got on the inside of Gallan and passed him for 2nd place, but Gallan came right back and retook the position on the final lap. This allowed him to cross the finish line in 2nd, while Brooks cruised to the win. It was a fitting end to a magnificent series for the Canadian, and although it seemed that Gallan might pull off the impossible and steal a series victory from Brooks, it was not to be.