If Sebastian Vettel Becomes Champion, we’ll give everyone the “Red Bull X2010 S.Vettel” to commemorate!

Up until the Singapore Grand Prix Sebastian Vettel had earned 309 points in this years Formula 1 season, placing him 124 points ahead of Jenson Button.

There are 5 races remaining including the Japan Grand Prix, but because the drivers points are allocated in the order of 25-18-15-12-10-8-6-4-2-1, for Button to win over Vettel he would have to win all of the remaining races. Vettel on the other hand only needs one more point in the next 5 races. Even if Vettel does not earn a point in the Japan Grand Prix, if Button does not come in first, Vettel’s championship title will be locked in.

If Sebastian Vettel becomes champion in the F1 Japan Grand Prix on Sunday, October 9, Gran Turismo 5 will give everyone who logs into the game a “Red Bull X2010 S. Vettel” to commemorate.

We will announce on gran-turismo.com when the gift will be given out. The gift is limited to one per account. This is a great opportunity to receive the ultimate racing machine created by Gran Turismo and Red Bull. We hope you’ll take part in the celebration!


* If the world championship title of Sebastian Vettel is not determined in the Japan Grand Prix, the gift opportunity will be moved back to the following race.
*The Gift feature is a part of the Gran Turismo 5 Community feature. In order to take advantage of this campaign, you must be signed in to the PlayStation®Network.

The “fastest racing car on earth, free of all rules and regulations”; the X2010 is a car created from this theme.

Initially in its development, the X2010 was a single seater canopied prototype with covered wheels. However Adrian Newey, the chief technical officer of Red Bull Racing who became partner in this project, suggested a new “wing” be added to the car: Fan car technology.

A fan car is a racing machine that draws out the air underneath a car using a fan, sucking the car towards the ground to create downforce. Because it creates a powerful downforce regardless of the car’s current speed, it is extremely fast on the track.

The performance of fan cars have been proven in the past, in cars such as the Chaparral 2J and Brabham BT46B. But both of these cars were banned from racing for their extreme speed. Unleashing this forbidden power, the X2010 became a racing machine with a huge fan at the rear end of the car. The front and rear wings, and the rear diffuser were reshaped to match. This made the X2010 a car that was capable of achieving over 450km/h, pulling a maximum horizontal G-force at the very limits of what a human body can handle, at 8.75G. 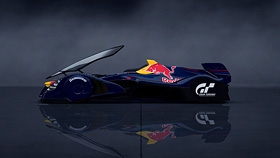 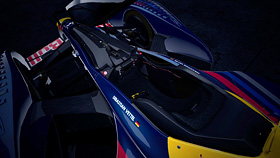 The X2010 was drawn by Gran Turismo and given wings by Adrian Newey. And the person who proved its capability, was the other pride of Red Bull Racing; the young and talented Sebastian Vettel.

Sebastian Vettel was born in Heppenheim, Germany on July 3, 1987. He had already begun to show great skill when he started Kart racing at the age of 8, and by the age of 15 had won a variety of Karting titles. After gaining experience in Formula BMW, he entered the F3 Euro Series, and won 4 races out of 20 in 2006 to become second in point rankings. Then he signed on with Red Bull Racing.

Also in 2006 he debuted in F1 through BMW Sauber, for whom he drove for in a rental contract. In the following year of 2007, he placed 8th in the US Grand Prix which he entered at the age of 19 years and 349 days, making him the youngest person in F1 history to acquire points. In 2008 at the Italian Grand Prix, he drove from Pole to Finish, setting a triple record for the youngest driver ever to win, making it to the podium, and achieving a pole to finish win, in his first ever victory in the series.

About a month before achieving this win, Vettel was performing the shakedown of the X2010 in Gran Turismo 5. During this shakedown he drove faster than the course record for F1 cars on Suzuka by more than 20 seconds. He also set a record of 1 minute, 4.853 seconds on the Nürburgring Grand Prix course, proving the validity of the X2010 and its advancement.

2 years after he started Karting, he discovered Gran Turismo at the age of 10. Vettel says he’s enjoyed all the Gran Turismo games through the years since then. We hope you’ll recall his incredible show of talent on the track, as you experience for yourself the incredible performance of the ultimate dream, the X2010.