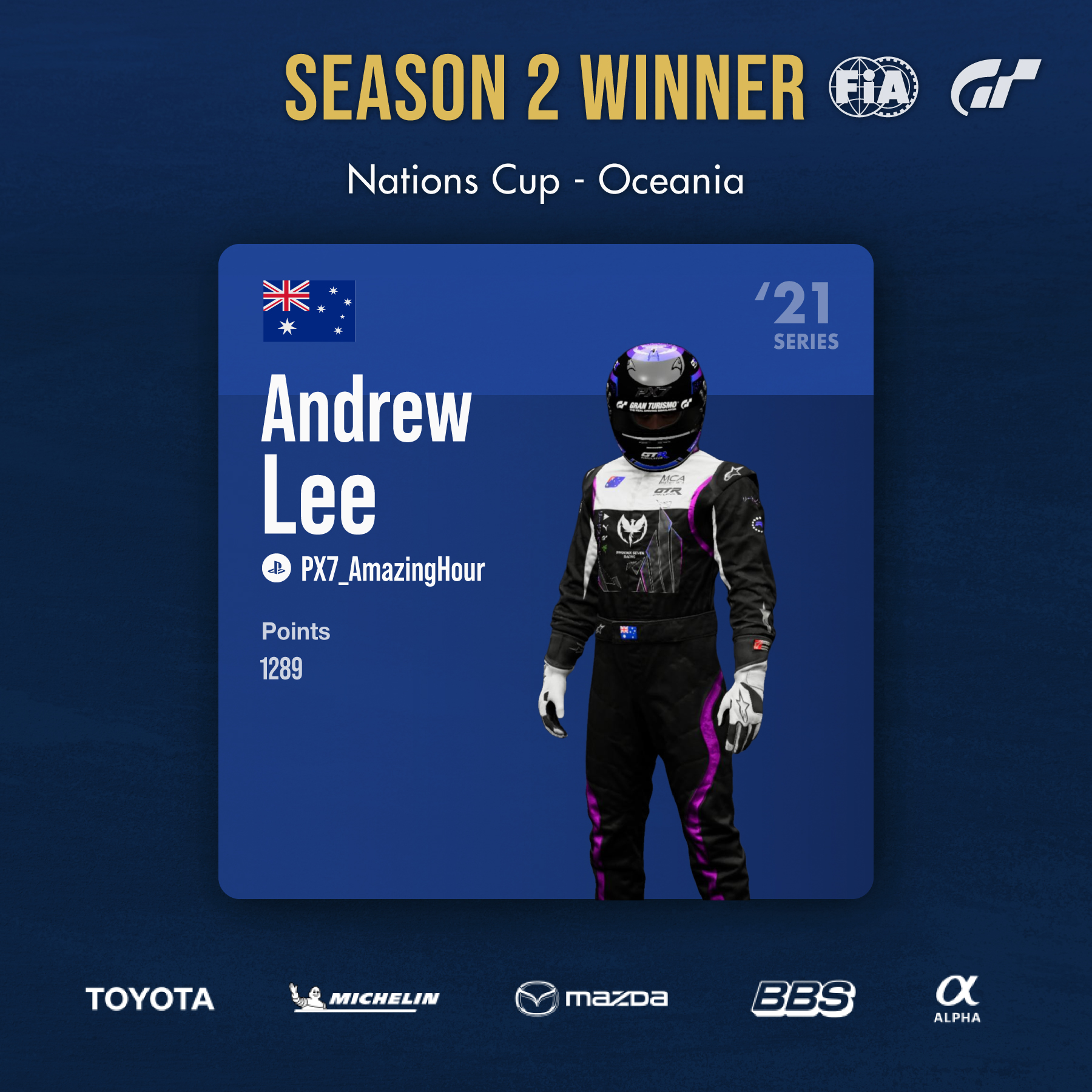 The FIA GT Nations Cup Season 2 got underway on July 10th. Round 1 took place at Autopolis. It was a one-make race, featuring the all-new Toyota GR 86 ’21.

Australia's PX7-Twitchy took pole position, and got the better of his teammate and fellow Australian Lee (PX7-AmazingHour) to win the race. A very nice one-two for Team Phoenix Seven Racing (PX7)!

Season 1 winner Lee came back with a vengeance in Round 2, defeating PX7-Twitchy and earning 325 points—enough to send him to the top of the leaderboard.

Round 3 saw New Zealand's McEwen (AE_McEwen) strike a blow against the PX7 drivers by winning the race, but this served only to fire up the PX7 crew who roared back in the next round. Lee took pole position, with PX7-Twitchy second on the grid. The two teammates led the race throughout, and Lee eventually crossed the finish line with an enormous winning margin.

Round 5 took place on Special Stage Route X, an enormous 30.283km oval track. It featured N400 cars doing battle at high speed, and seeking to make the most of their rivals’ slipstreams. The track's rather unique layout also meant that it demanded an uncommon degree of strategy and skill.
Lee started in seventh place on the grid, with PX7-Twitchy in eighth and New Zealand's PX7-Tezzaar in ninth. The PX7 were going to have to do a lot of overtaking in order to win.

By the end of the home straight on the first lap, the three PX7 cars were forming the leading group, and PX7-Tezzaar, Lee and PX7-Twitchy would go on to cross the finish line in first, second and third place respectively.
This meant that PX7 drivers occupied the entire podium, with PX7-Tezzaar's victory enough to see him move up to fourth place on the leaderboard.

Rounds 6 and 7 were both won by Lee, his speed providing to be too much for any of his rivals.

In Round 8, McEwen beat Lee to pole position and went on to establish a decent lead. His race pace was just wonderful, and Lee could do nothing to close the gap. McEwen ended up crossing the finish line a full five seconds ahead of Lee in second place.

However, Lee went pole-to-win again in Round 9, further tightening his vice-like grip on first place.

In the final round, Lee took pole position with McEwen second on the grid. Lee would go on to lead the race in the early stages, but McEwen managed to keep up, eventually overtaking him on the seventh lap.
There was very little between the two cars, and in the end it was pit stops that would prove decisive. McEwen exited the pit to a clear track, but Lee got caught behind Australia's Rangeraus, which meant that McEwen's lead grew further.

McEwen eventually built up a 10-second lead, and won the race comfortably. McEwen's form in the latter stages of the season had been nothing short of sensational, but he had left it a little late, and ended up in third place overall.

The Season 2 title was therefore won by Lee, who showed great consistency from the start, picking up victories on a regular basis. In the absence of the serial champion Nik_Makozi, it's fair to say the Lee is currently the Oceania region's leading light. He has also shown his talent outside of the Nations Cup, for example by defeating the Japanese superstar Akagi_1942mi in a Manufacturer Series showdown. We can expect great things from him in the future!