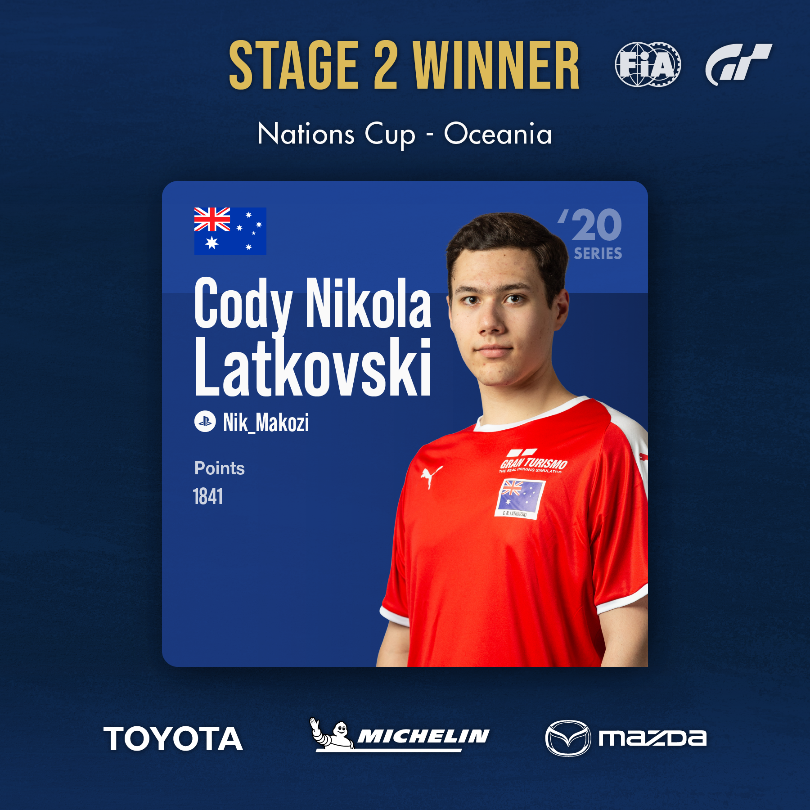 The second stage of the 2020 Nations Cup got underway on July 4th.
It would turn out to be a stage where Australia's Latkovski, dominant winner of Stage 1, would be pushed very hard by his up-and-coming rival, McEwen of New Zealand (AE_McEwen).
Indeed, McEwen outscored Latkovski in Rounds 15, 18 and 19 - though in all three races both drivers failed to perform well enough for these points to be added to their totals.

This meant that Latkovski remained top of the leaderboard going into the final race, but the scene was set for an all-new tussle between the old Oceania rivals, Australia and New Zealand.

The final race of Stage 2 was a one-make race, with all drivers in a F1500T-A. It took place on the Circuit de Sainte-Croix-C.
Australia's Latkovski took pole position, with New Zealand's McEwen back in third and hoping for a come-from-behind victory.

Things got off to a tumultuous start. Latkovski suffered a major wheelspin, and fell down to sixth place almost immediately. His main rival McEwen, on the other hand, started brilliantly, and soon found himself in the lead.
This didn't last long, however, as on the second turn Australia's Lindgren (dylanlindgren) got on the inside of McEwen to claim first place for himself.

His terrible start meant that Latkovski was caught up among the chasing pack, but he was still able to move up to third place by the second lap, and soon after that he was hot on McEwen's heels.

The leading pack all took a pit stop on the fourth lap. At this point it became apparent that Latkovski was opting for a three-stop strategy that would allow him to use soft tyres twice.

This strategy paid off on the fifth lap. The superior grip of Latkovki's soft tyres proving no match for Lindgren's hard tyres, the series leader overtaking his compatriot on the second turn.

Things soon got even worse for Lindgren, as McEwen also overtook him, pushing him down to third place. Soon afterwards, both drivers took a pit stop to change their tyres.

At this point, Latkovski enjoyed a 20 second lead over McEwen in second place, but he still had to take two pit stops for mandatory tyre changes.

Latkovski waited until the eighth lap, by which time he had a massive 30 second lead, to take the first of these pit stops. McEwen duly took the opportunity to cut the lead down to 17 seconds.

The race entered its final lap. Latkovski took another pit stop, and made his final mandatory tyre change. This was McEwen's big chance to close the gap, but he was unable to sufficiently pick up the pace, and had to settle for second place in the end.

Despite suffering a dreadful start, Latkovski displayed great pace and a perfect pit strategy to romp home the clear winner. The victory ensured that he would end Stage 2 as he had begun it - on top of the leaderboard.