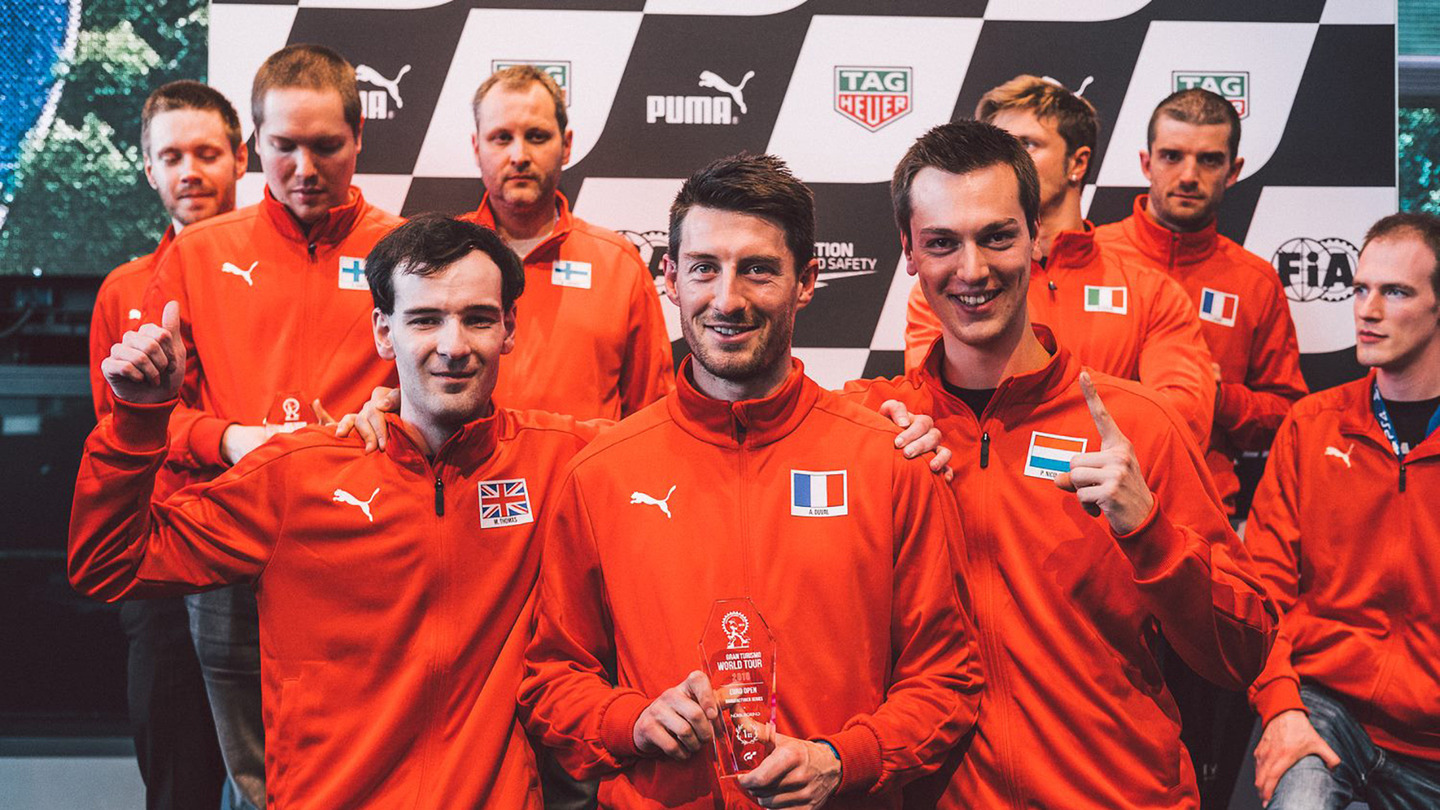 At 3:00PM on 11 May, as the 2nd qualifying session for the real 24-Hour race was happening on the track, the Final for the Manufacturer Series took place at the Ring Boulevard, Nürburgring's the event space. The competing manufacturers included Mercedes-Benz, BMW, Audi, Porsche, McLaren, Ferrari, Renault Sport, Toyota, Nissan and Subaru, for a total of 10 teams. There were 2 races to the finals, starting with a 30 minute race at Monza, followed by a 60 minute mini-endurance race on the Nürburgring 24-Hour layout. The cars were all Gr.3 machines, and as there were 3 drivers, a minimum of 2 pit stops were required.

In Race 1 at Monza during the 10 minute qualifying session, Mercedes-Benz (AMG GT3) beat the top time set by Toyota (GR Supra Racing Concept) in the last 25 seconds of the session, but Toyota made a final attack lap to turn the tables just before the end. The crowd watching at the venue was already filled with excitement. 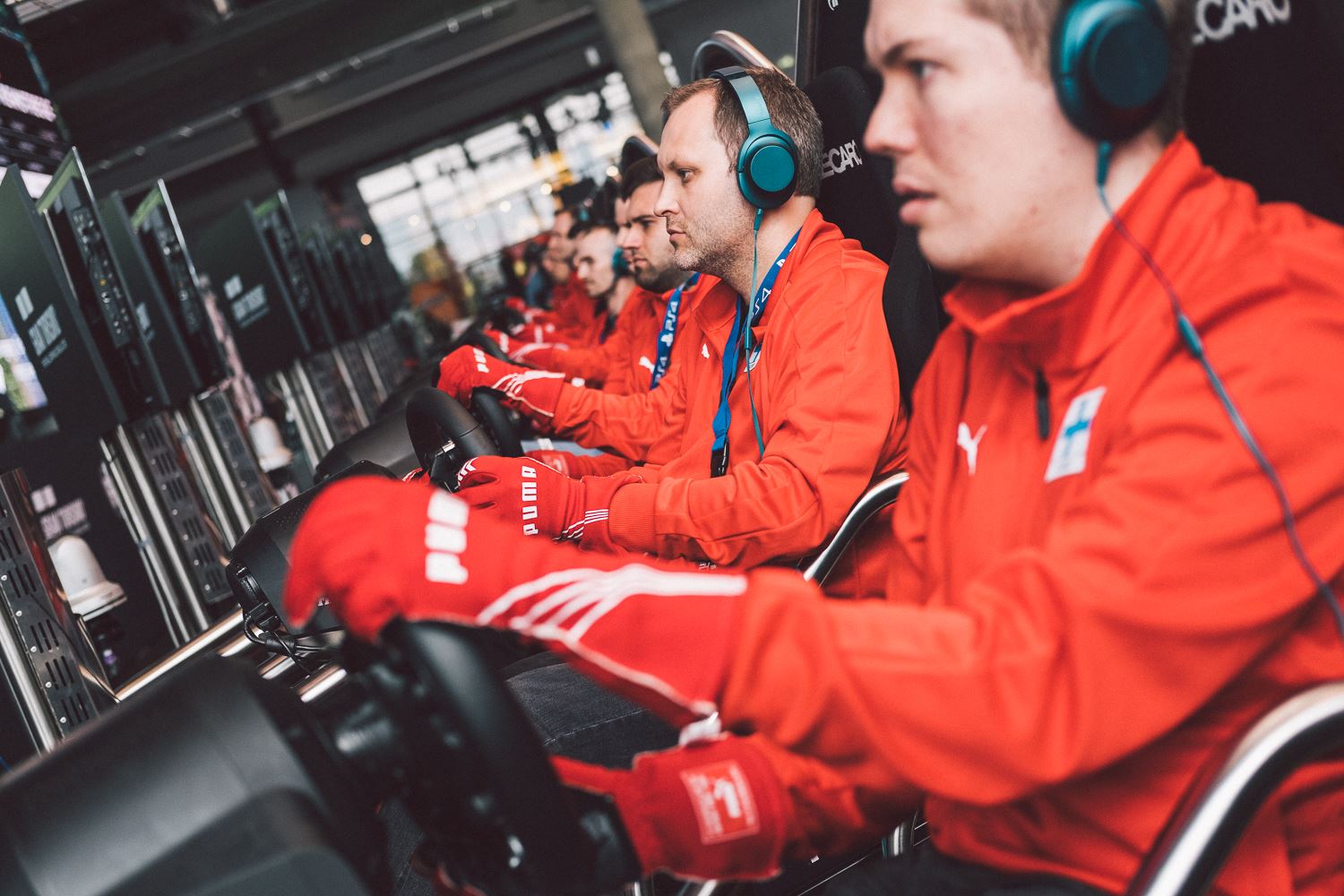 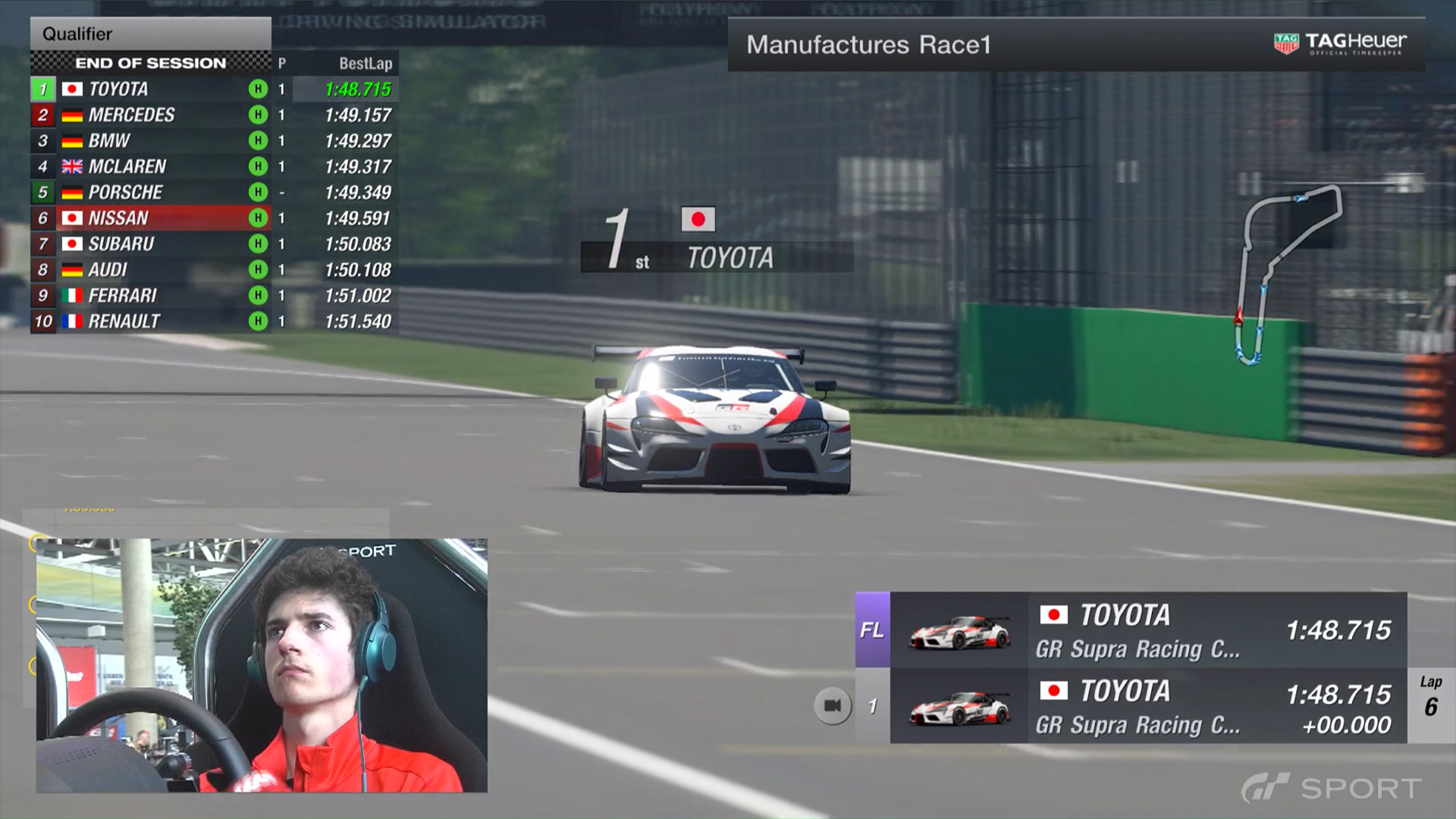 In the Final race, Mercedes took off to a great start, but aside from the Audi which dropped back, the 9 cars were incredibly close throughout the race with almost no time difference. The battle for 2nd place was especially close, showcasing the participants' level of skill. 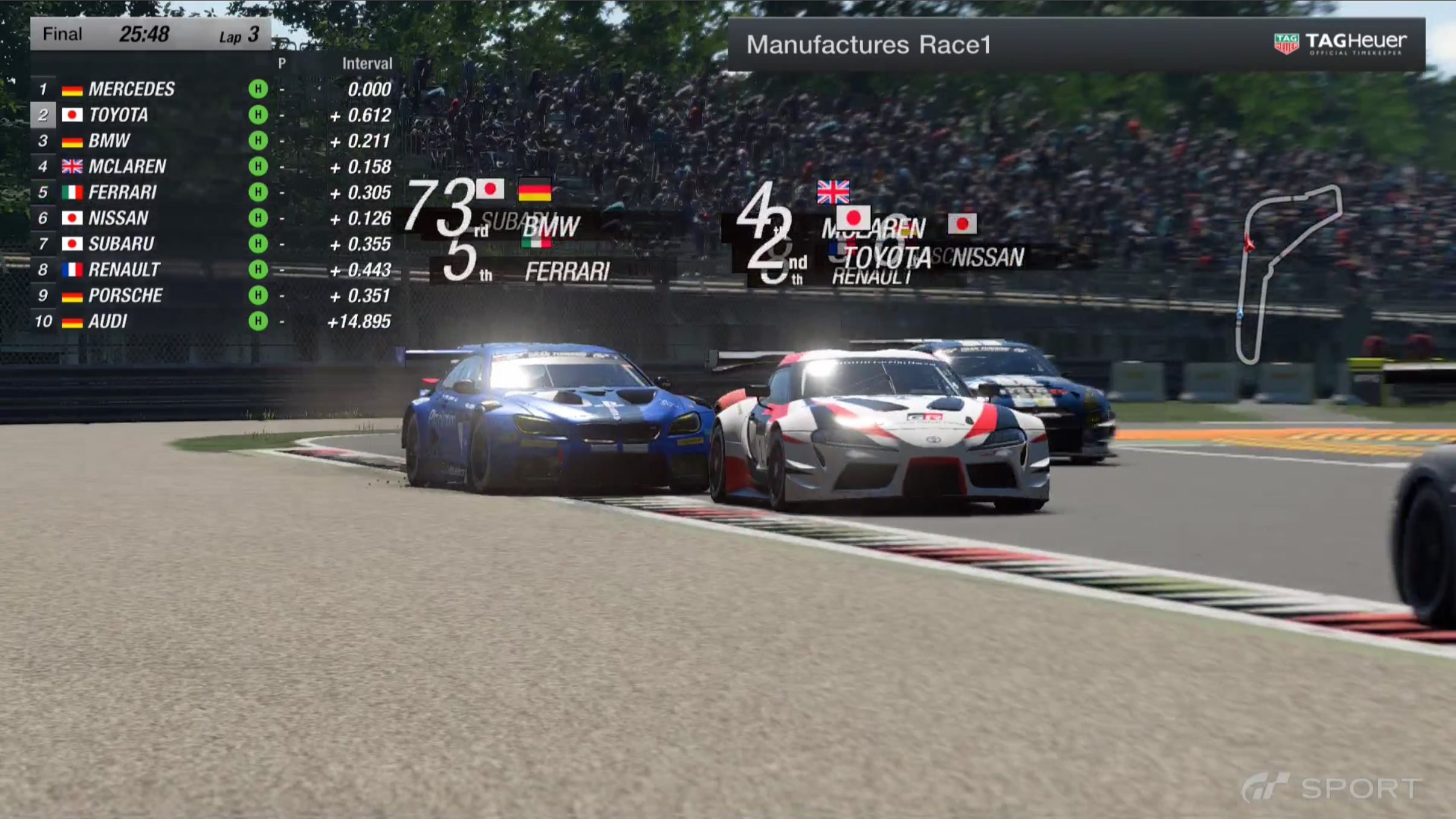 The tide in the race begins to turn as the top group starts to pit in lap 6. The up-to-that-point leading Mercedes dropped to 5th, with Subaru (WRX Gr.3), Porsche (911 RSR) and Ferrari (458 Italia GT3) forming a top 3 group after skipping the pit stop on the same lap. However, they too entered the pits in the following lap, placing Nissan (GT-R Nismo GT3 N24 Schulze Mortorsport) in the lead, chased by Mercedes and Renault Sport (R.S.01 GT3). 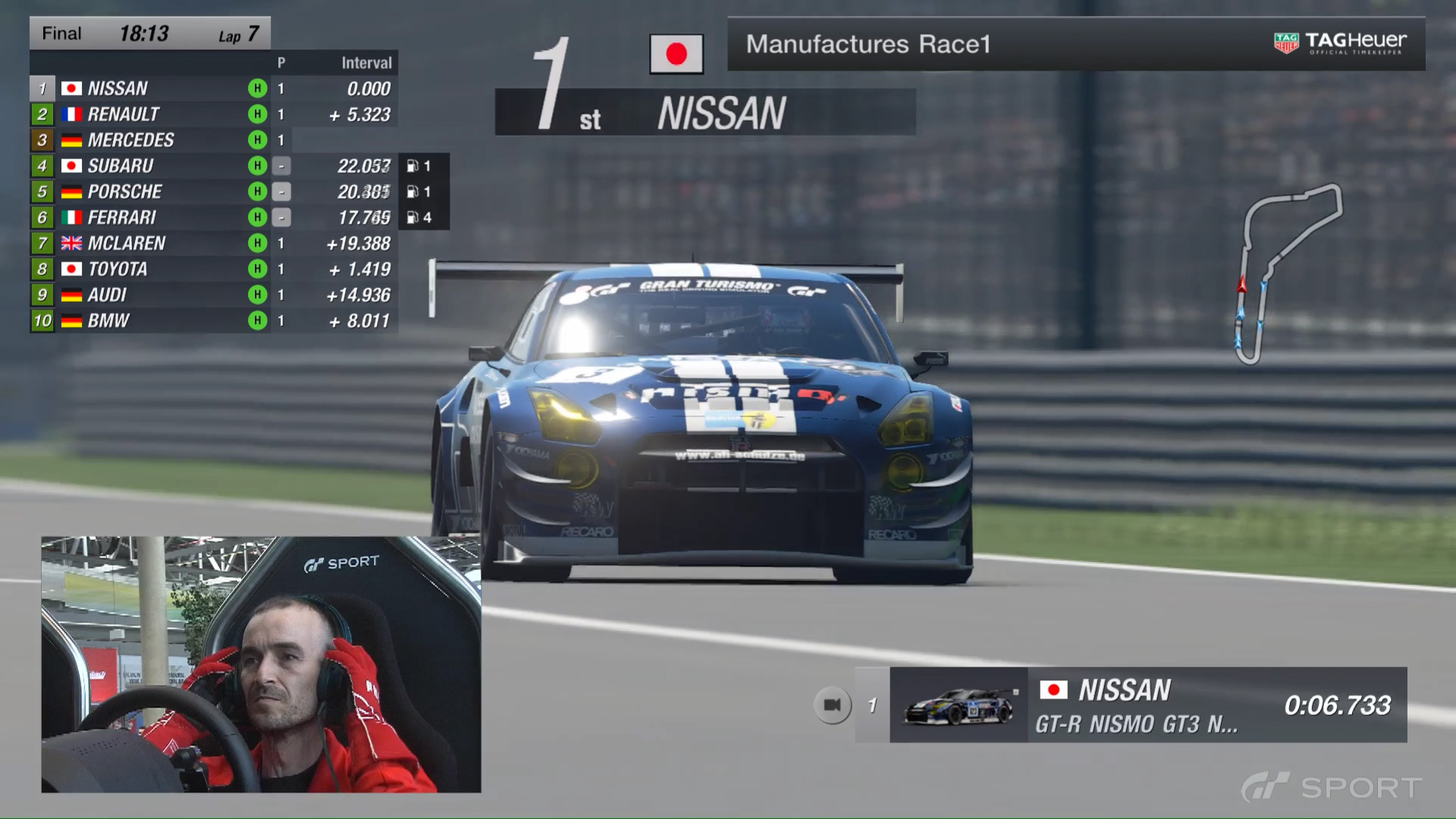 From this moment on, it looked as though Nissan could keep the lead, but Mercedes made a strong comeback, taking the lead once again at one point. However, on the 14th lap, the Mercedes ran off course on the first chicane and dropped to 4th place. The remaining Renault Sport also tried to catch the lead, but time ran out, and the Race 1 victory went to the Nissan team (Kimmo Kaisla / Tom McPherson / Markus Kononen). 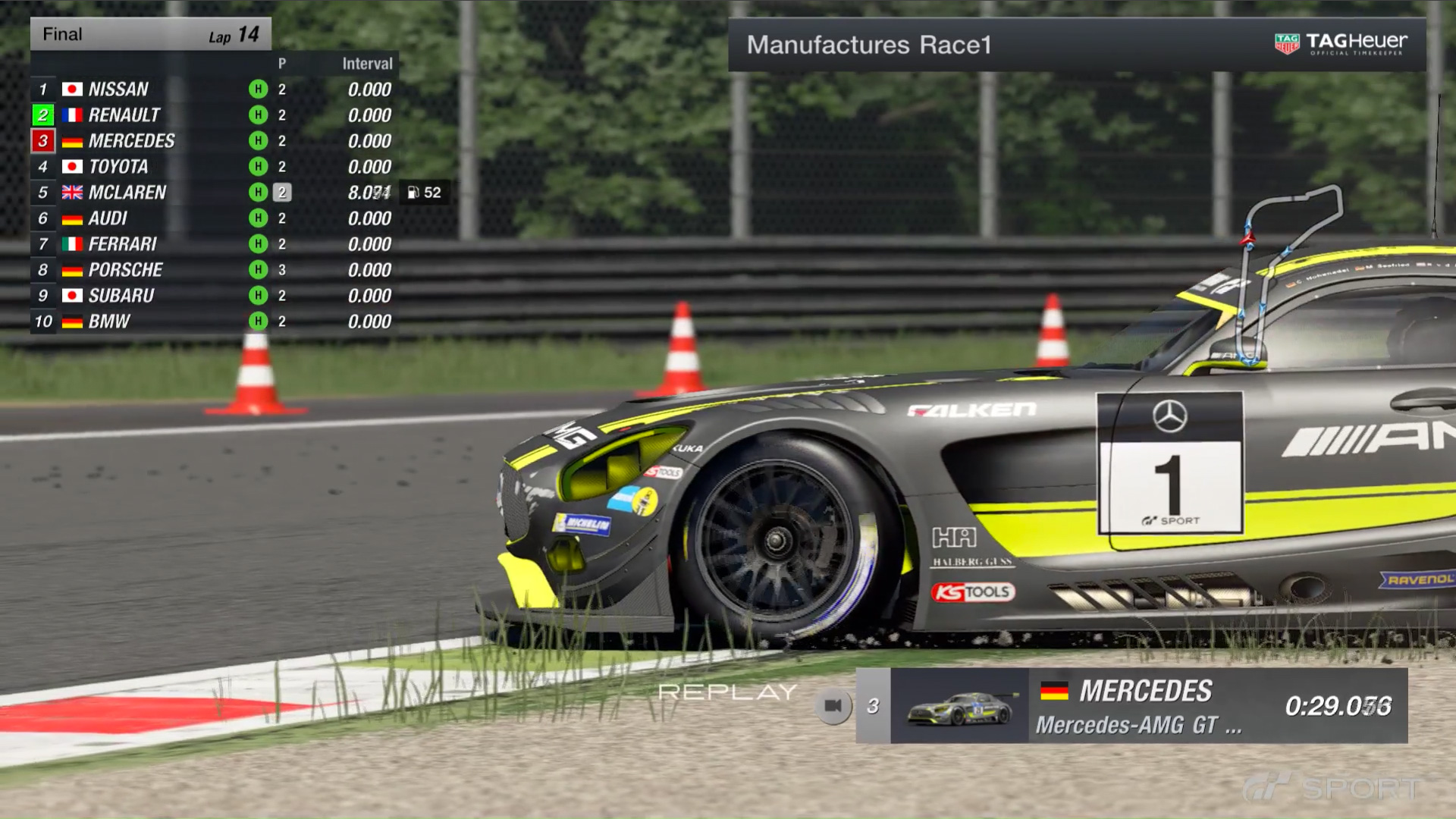 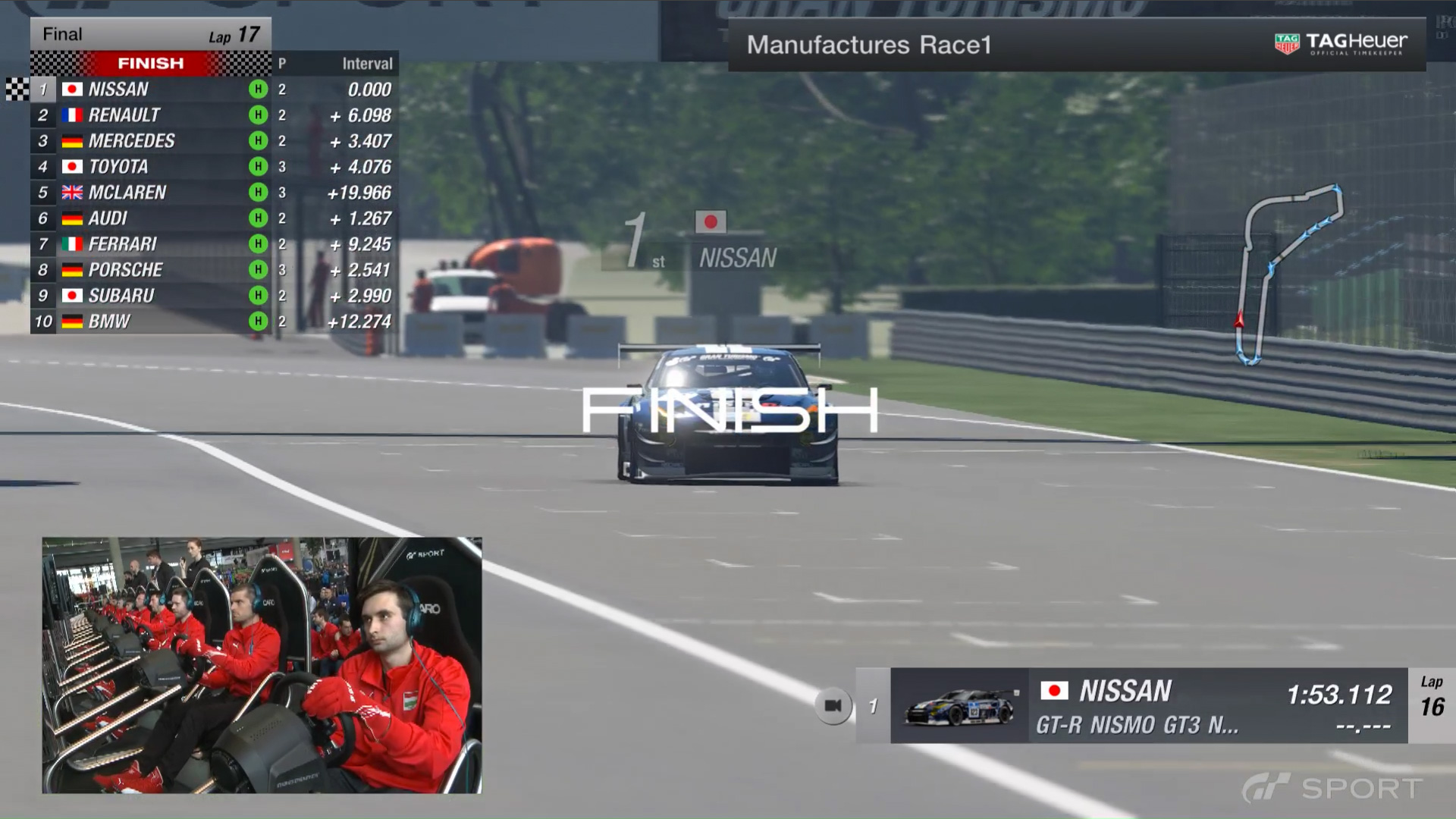 Race 2 was staged at the location of the venue itself, the Nürburgring. Starting in a grid order determined from the results of Race 1, Nissan made a solid start from the pole position. With no one ahead, they gradually gained a gap from the group behind. 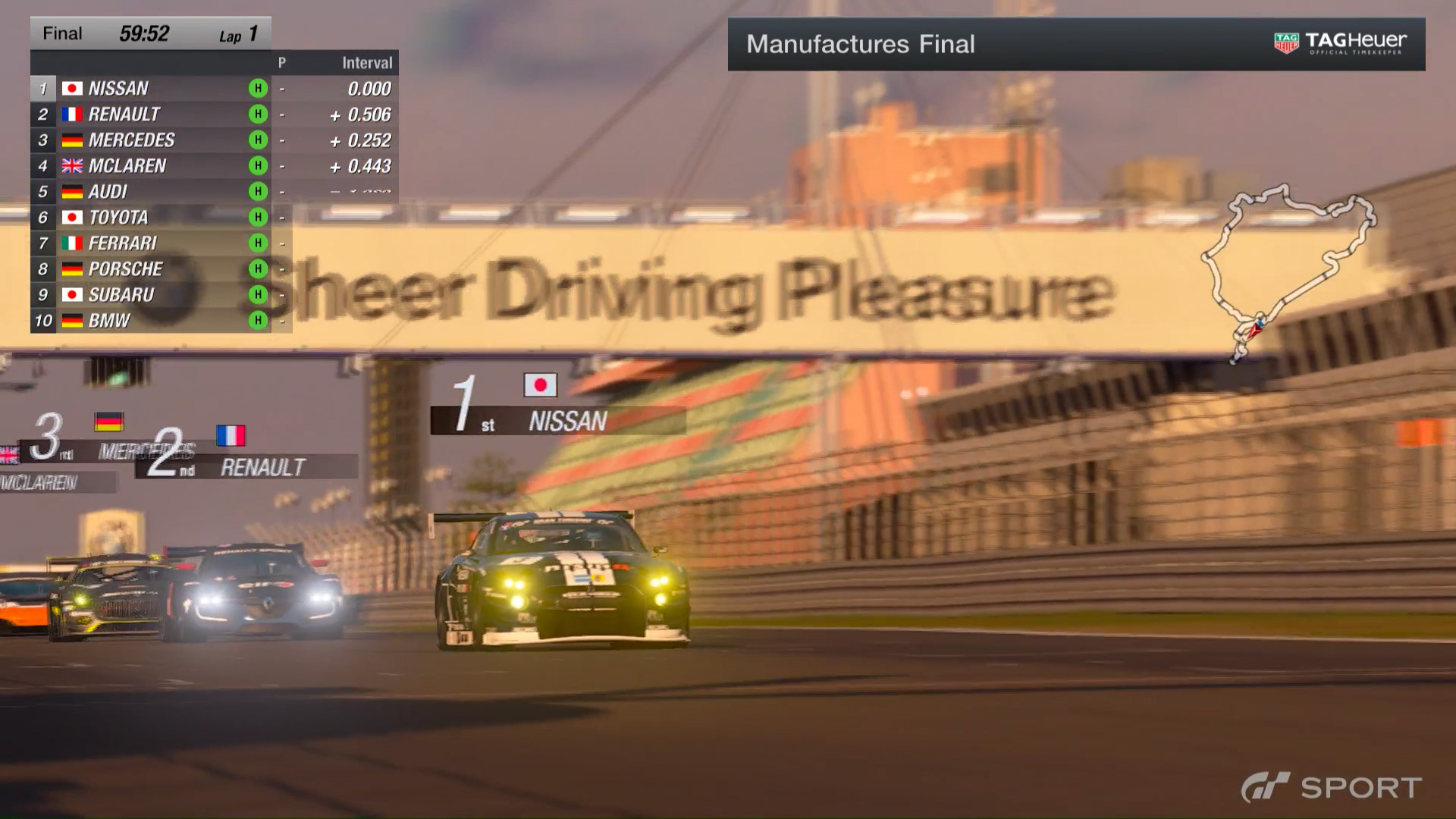 Meanwhile, the fight for 2nd place was spectacular: with cars constantly going 2 wide and 3 wide, there was no time to look away for even a moment. This was the ultimate drama, only made possible by those who have truly mastered the art of driving. 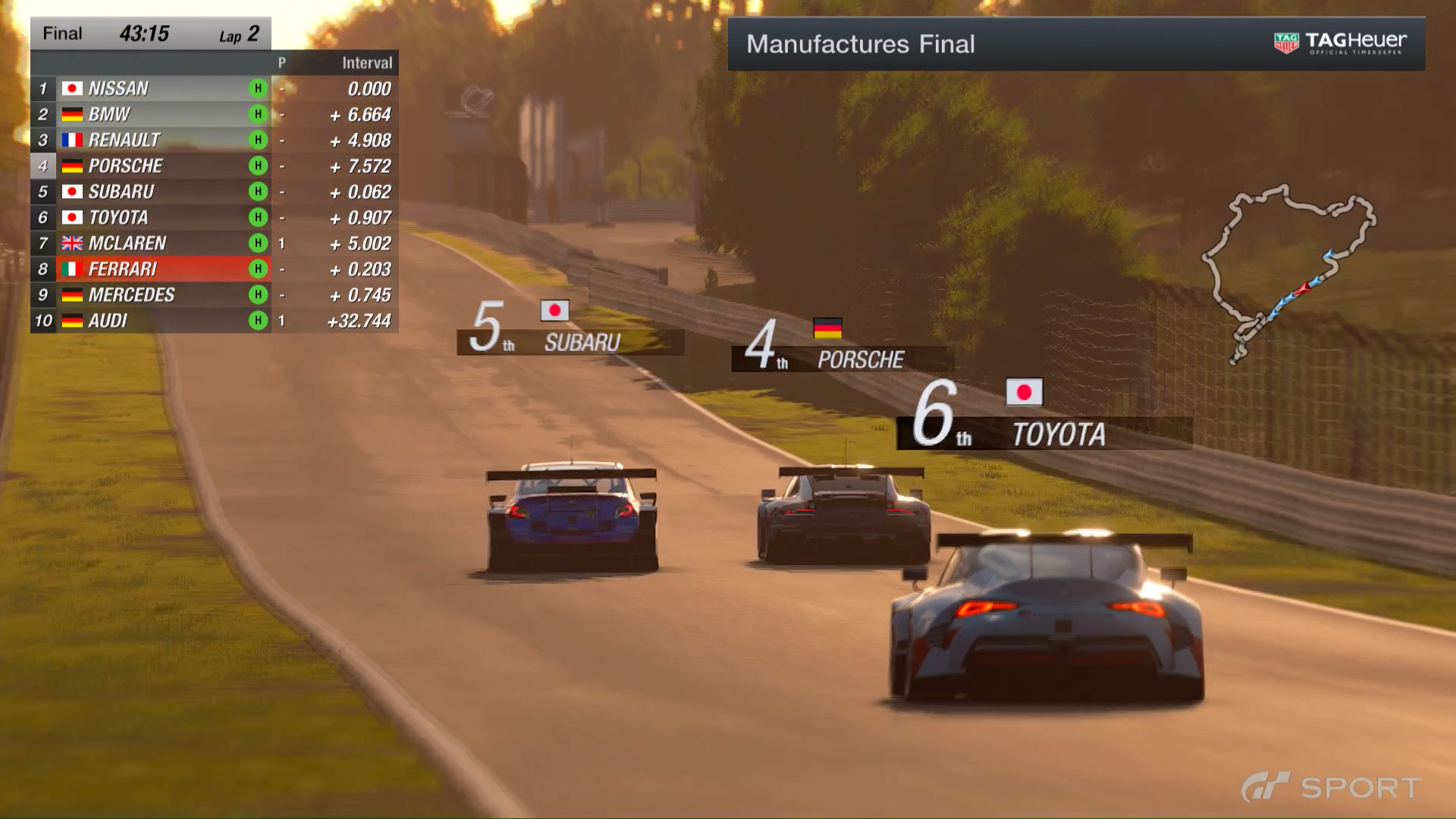 Even after multiple pit stops, Nissan managed to keep the lead. However, on lap 6 with 10 minutes remaining in the race, BMW (BMW M6 GT3) had shaken off its rivals and was finally catching up to the Nissan. Cornering Nissan in the descending section after Hohe Acht, the BMW took the lead at the end of Döttinger. But Nissan was not about to give up; clearing the first corner of the GP course with skilful lines, they regained the lead. And the extremely close dogfight continued into the Nordschleife. 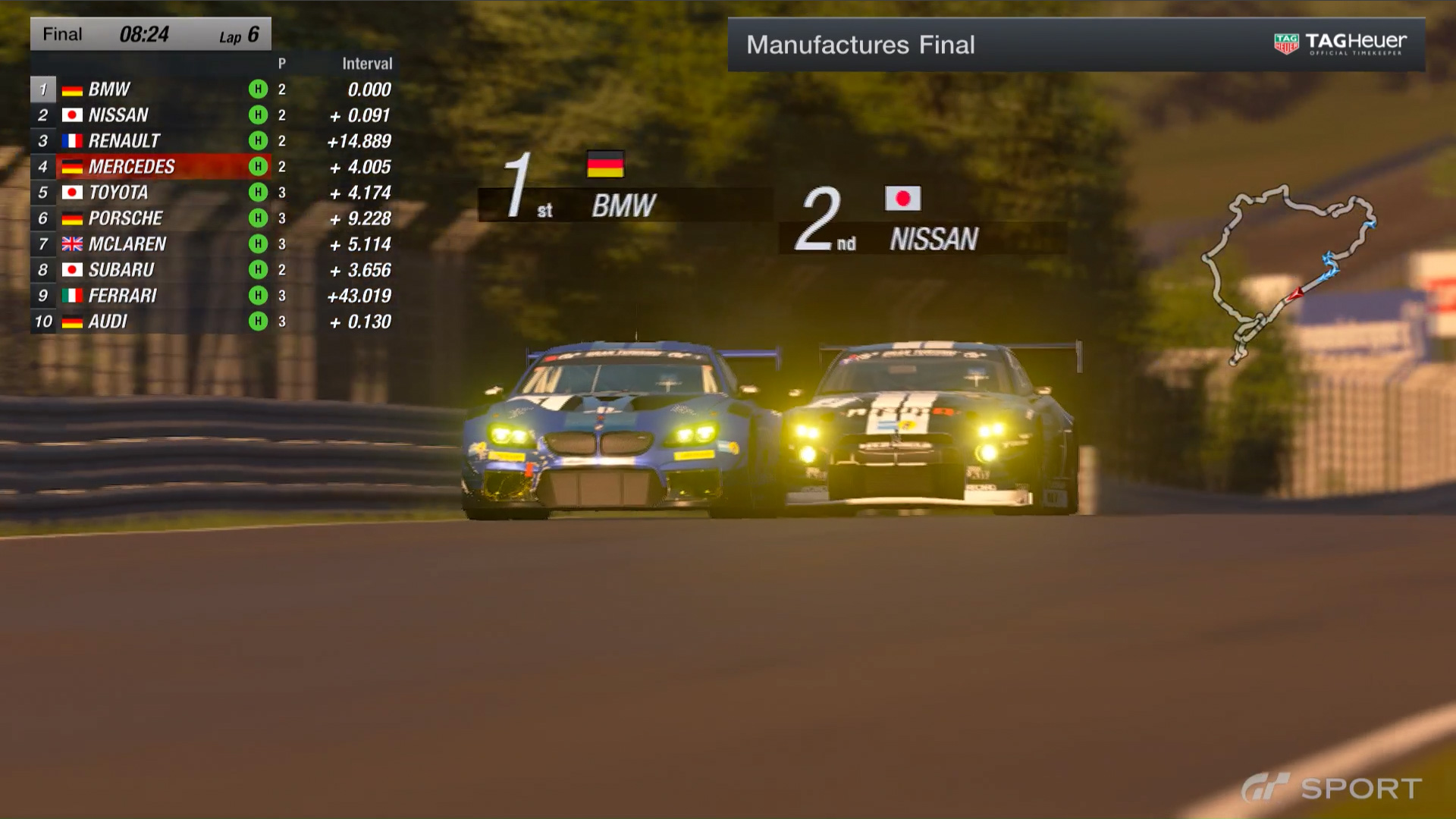 The tide began to turn at Klostertal. BMW got ahead by jumping into the right hand corner before the carousel. Nissan was not about to let this go, and both cars passed the carousel and entered the ascending section. However at Hohe Acht, perhaps losing concentration momentarily, Nissan made a fatal run off the track. With a dramatic turn of events, victory for Race 2 went to the BMW team. This victory also gave the BMW team (Anthony Duval / Phillipe Nicolay / Matthew Thomas) the overall win in the Manufacturer Series. 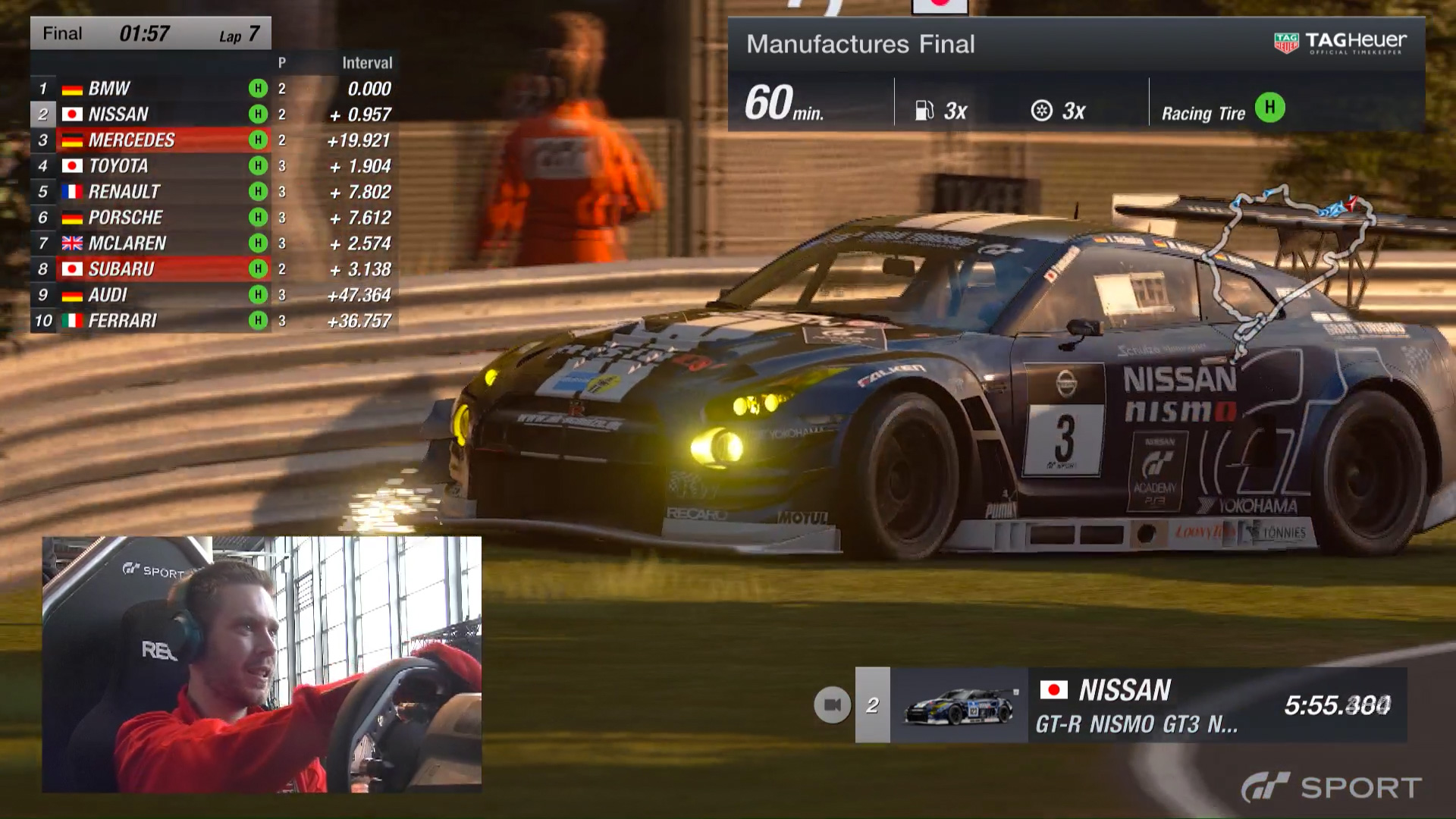 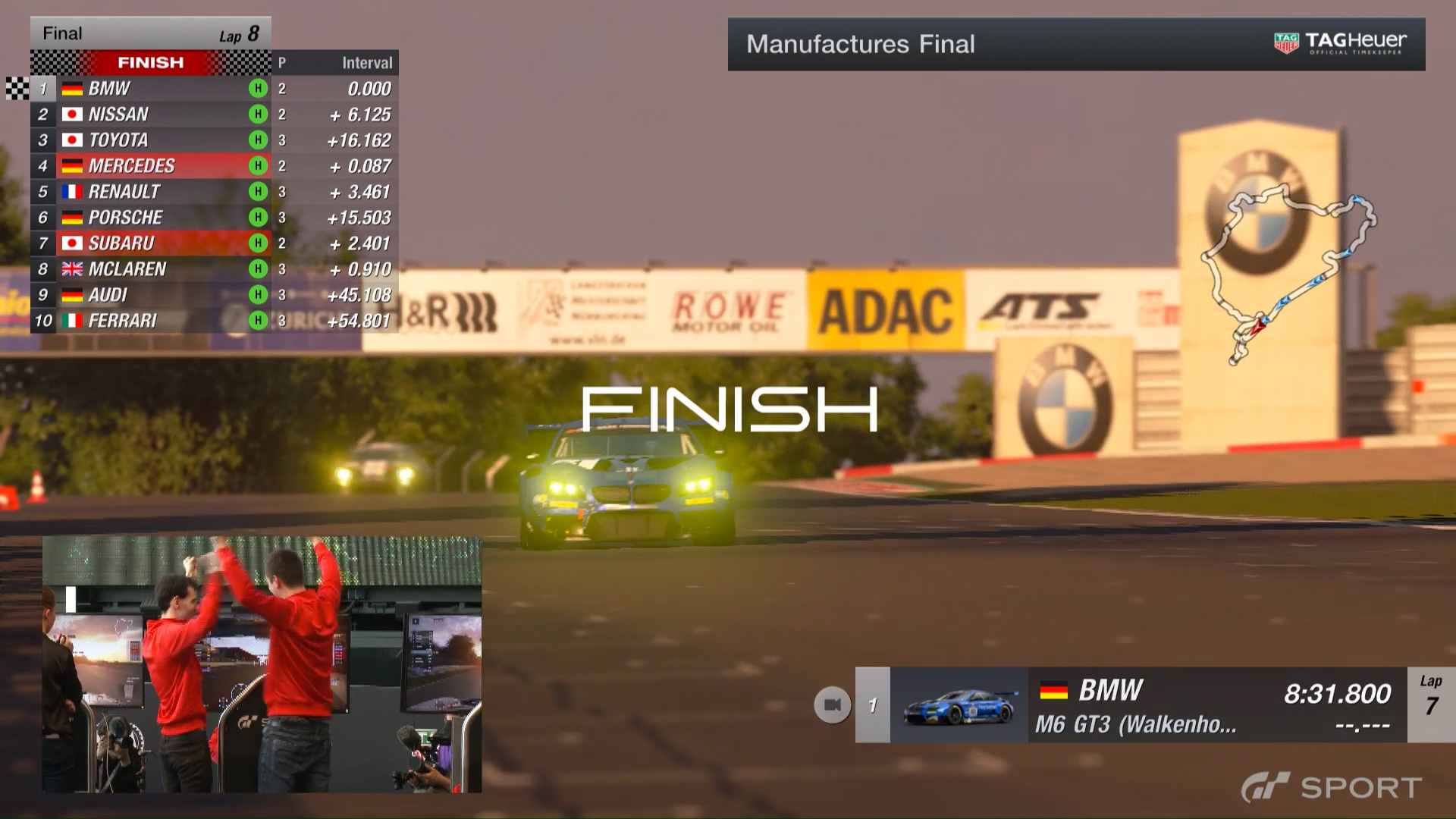 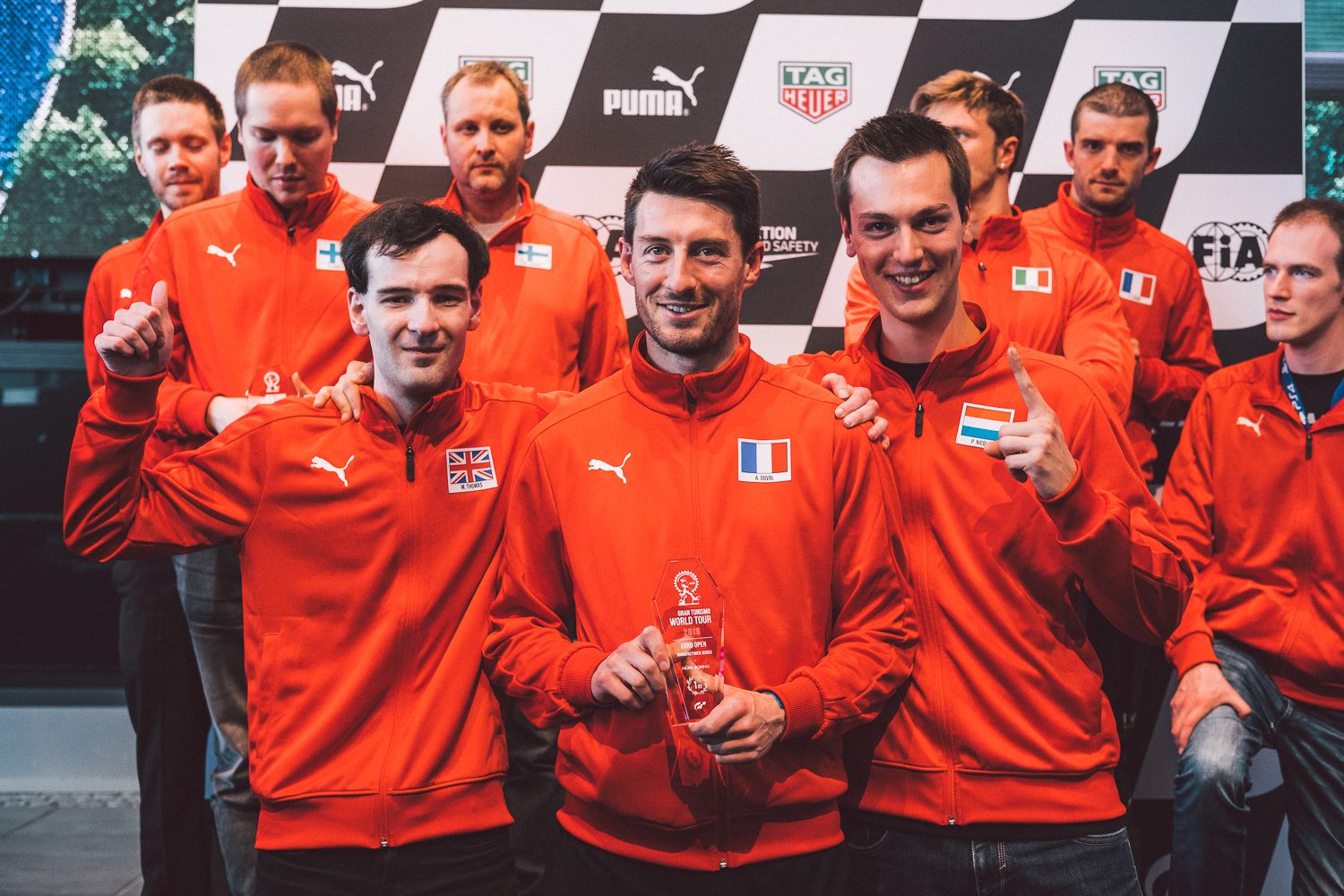