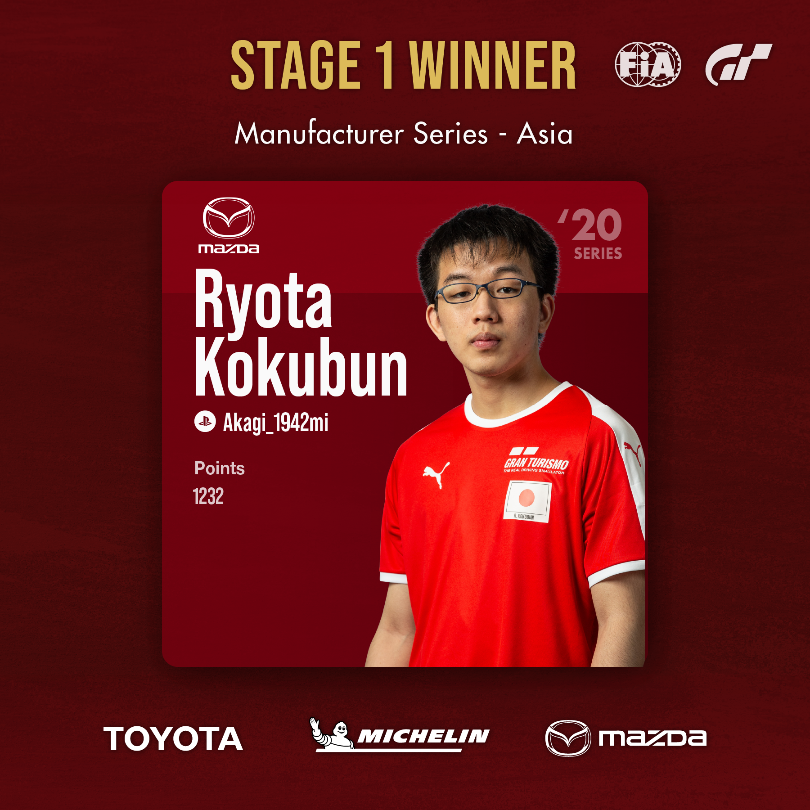 Following a long exhibition series, the first stage of the 2020 Manufacturer Series got underway on April 25th.
All eyes were on Mazda's Kokubun from the start, but he was disappointing in the early stages, failing to score as many points as he'd have liked.

Meanwhile, Citroen's Mizuno (Gori_R4ichi) showed the world how much he'd developed during the exhibition series. His performance in Round 7, where he took 438 points, was particularly impressive, and heralded the arrival of a major new talent.

The final race of Stage 1 featured Gr. 3 cars, and took place at Interlagos.
Subaru's Miyazono (Kerokkuma_ej20) took pole position with an astounding qualifying time of 1’28.959. Nissan's Fukuya (JUN-_-JEEEEN) took second place, in something of a return to form, with the much-hyped Mizuno in third.
Kokubun was in fourth place on the grid, but was hoping to get to grips quickly with his RX-VISION GT3 CONCEPT (which was making its debut), in order to challenge for the lead.

The 20-lap race got underway. Fukuya was the only one who'd opted to start on soft tyres, but proved unable to overtake Miyazono's Subaru, despite the latter being on medium tyres. Fukuya's initial tyre choice had been an error.
The standard strategy for a driver in his position would have been to choose the same medium tyres as Miyazono and aim to keep pace with him in the early stages. The disadvantage of this strategy is that it may not leave you with enough fuel to turn up the speed on soft tyres later on.

Citroen's Mizuno, on the other hand, had opted to start on hard tyres, a decision which saw him drop down to sixth place before the end of the first lap. However, Mizuno's plan was to complete his mandatory tyre changes as quickly as possible. Indeed, he switched back from hard to soft tyres after just one lap. This pit stop saw him drop to 11th place, but it also gave him the opportunity to drive the rest of the race on soft tyres.

The second corner of the sixth lap saw Kokubun suffer a 0.5 second penalty for leaving the track. This slowed him down, allowing Honda's Sugimori (s-shohei_) to catch up with him.

On the eighth lap, race leader Miyazono switched from medium to soft tyres. Then on the ninth lap both Fukuya and Kokubun switch to hard tyres for one lap before switching back again, thus completing their mandatory number of tyre changes.

Kokubun, having saved his soft tyres till last, rejoined the track in fifth place, and set about the task of improving his position.

At this point, the race leader was Mizuno, who'd been driving on soft tyres ever since the second lap. He then completed his own final mandatory tyre change on the 11th lap, leaving him to see out the rest of the race on medium tyres. His timing as he left the pit lane, however, saw him get dragged into a seven-lap duel with Yamanaka (yamado_racing38)'s Toyota, with the latter also having the benefit of soft tyres. Mizuno couldn't keep up the pace, and this allowed Kokubun to spy a chance to close the gap.

On the final lap, Yamanaka had to take a pit stop for a mandatory tyre change. Mizuno finally had the lead, but couldn't afford to relax. Kokubun was right on his tail, just 0.2 seconds behind him.

Kokubun, with the advantage of soft tyres over Mizuno's medium tyres, made his move on the seventh corner, overtaking Mizuno and then holding onto the lead until the chequered flag. It was a debut win for the RX-VISION GT3 CONCEPT, and a well deserved stage win for Kokubun.

This was not an utterly dominant performance from the old champion, however. Indeed, the story of stage one was the rise of a new star in the form of Citroen's Mizuno.

Special mention should also go to Nissan's anchovy_sand (who did not take part in Round 10). Not only did he perform better than his teammate Fukaya, he also managed to score more points than Kokubun himself in Rounds 2 and 6.