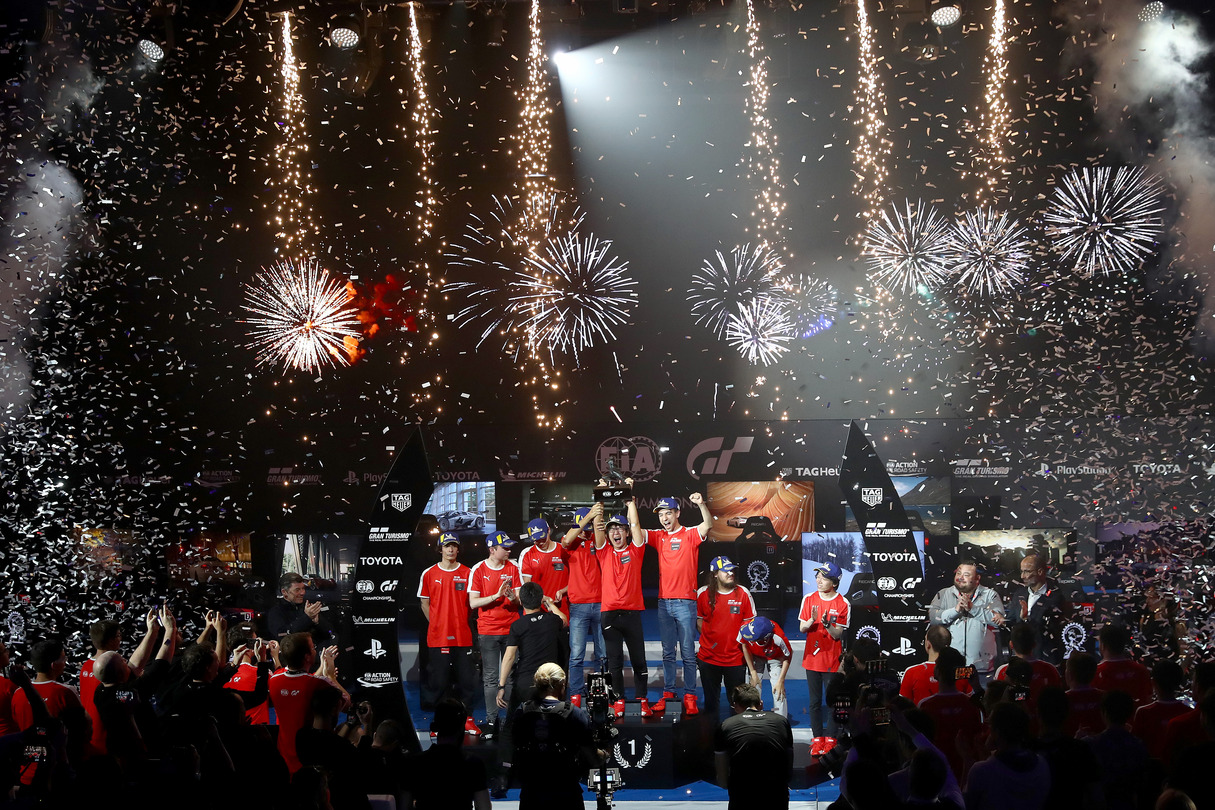 MONTE CARLO, Monaco (November 23 2019) – The World Finals of the FIA Gran Turismo World Championships, held in the majestic principality of Monaco, entered its second day of competition today with the climactic finale of the Manufacturer Series. While torrential rain and high winds pounded the coastal locale, the air inside the Sporting Monte Carlo Complex was electric, as favorite Mercedes-Benz looked to put the crowning glory on a brilliant year that saw them win two World Tour events in New York and Salzburg.

Mercedes-Benz looked tough to beat in Monaco, throwing down the best time in General Qualifying with Tom Lartilleux behind the wheel; however, Toyota was not to be outdone, as its ace driver, Igor Fraga, was intent on redeeming his status as one of the best drivers in the world after a disastrous performance in the Nations Cup Semi-finals the previous day. A brilliant drive by him in the Top 6 Qualifying session, which determined the starting order for the first race, established Toyota with pole position over the German manufacturer. The stage was set, and it was time for the teams to rumble.

In a 20-lap contest at the Dragon Trail Gardens II Circuit, it came down to tire management strategy. The rules required the usage of soft, medium, and hard compounds, each for a minimum of six laps, while each driver (of three per team) was required one stint of at least five laps. Sitting first on the grid Brazilian Igor Fraga opted to go with the soft-compound tires right out of the gate. Cody Nikola Latkovski of Australia placed his team’s Mercedes-Benz AMG GT3 in second position, while Baptiste Beauvois of France rounded out the top three in Team Lexus’ RC F GT3. 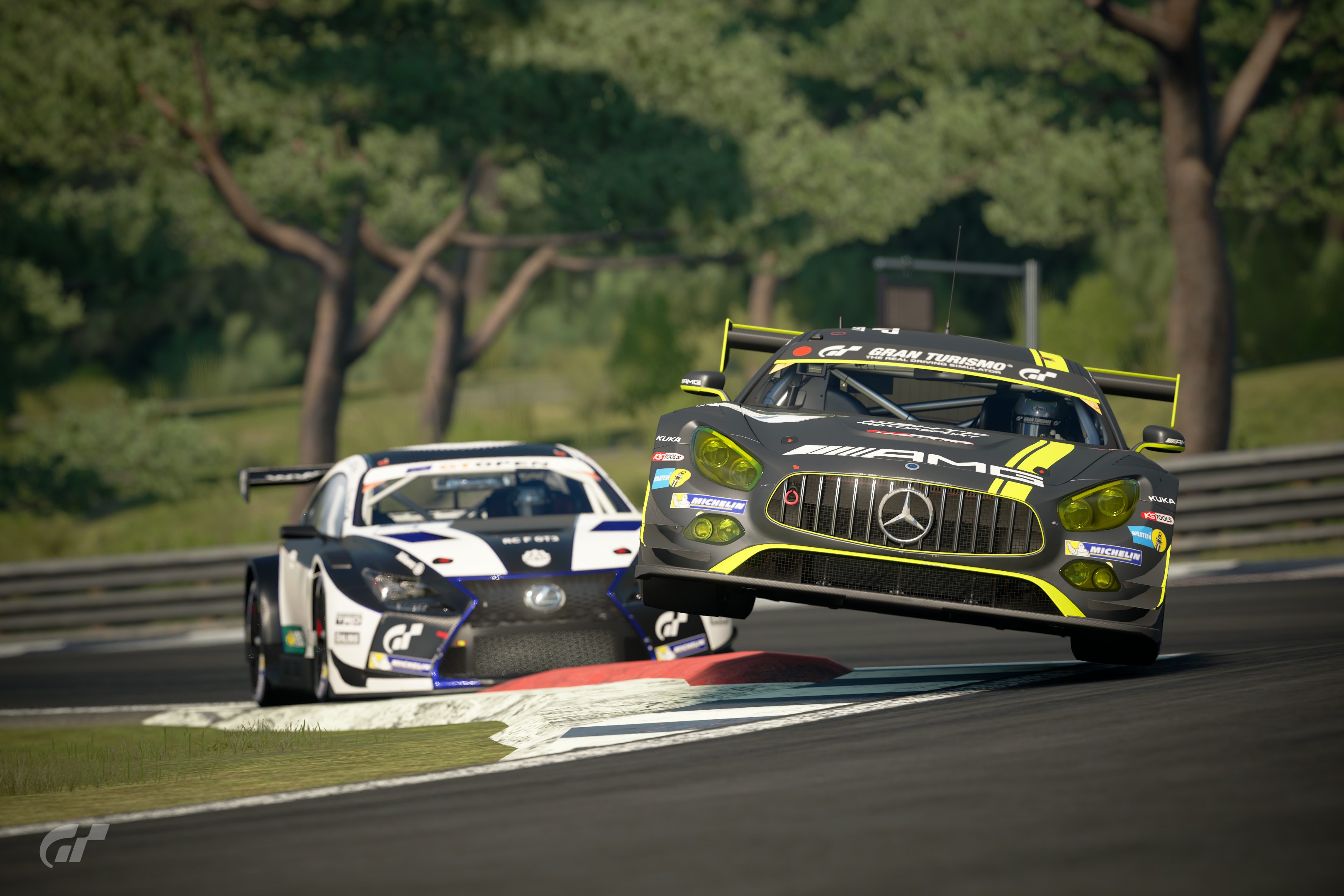 On soft tyres, Toyota was able to pull ahead of the pack right away, while Mercedes-Benz, which started on mediums, opted to save the quickest tyres for later. Ironically, the slower cornering speed of the hard compounds helped hold off the rest of the pack from the lead Toyota, especially the soft-tyred Lexus in Position 3, which couldn’t get around the AMG GT3, giving the Supra a commanding early lead. 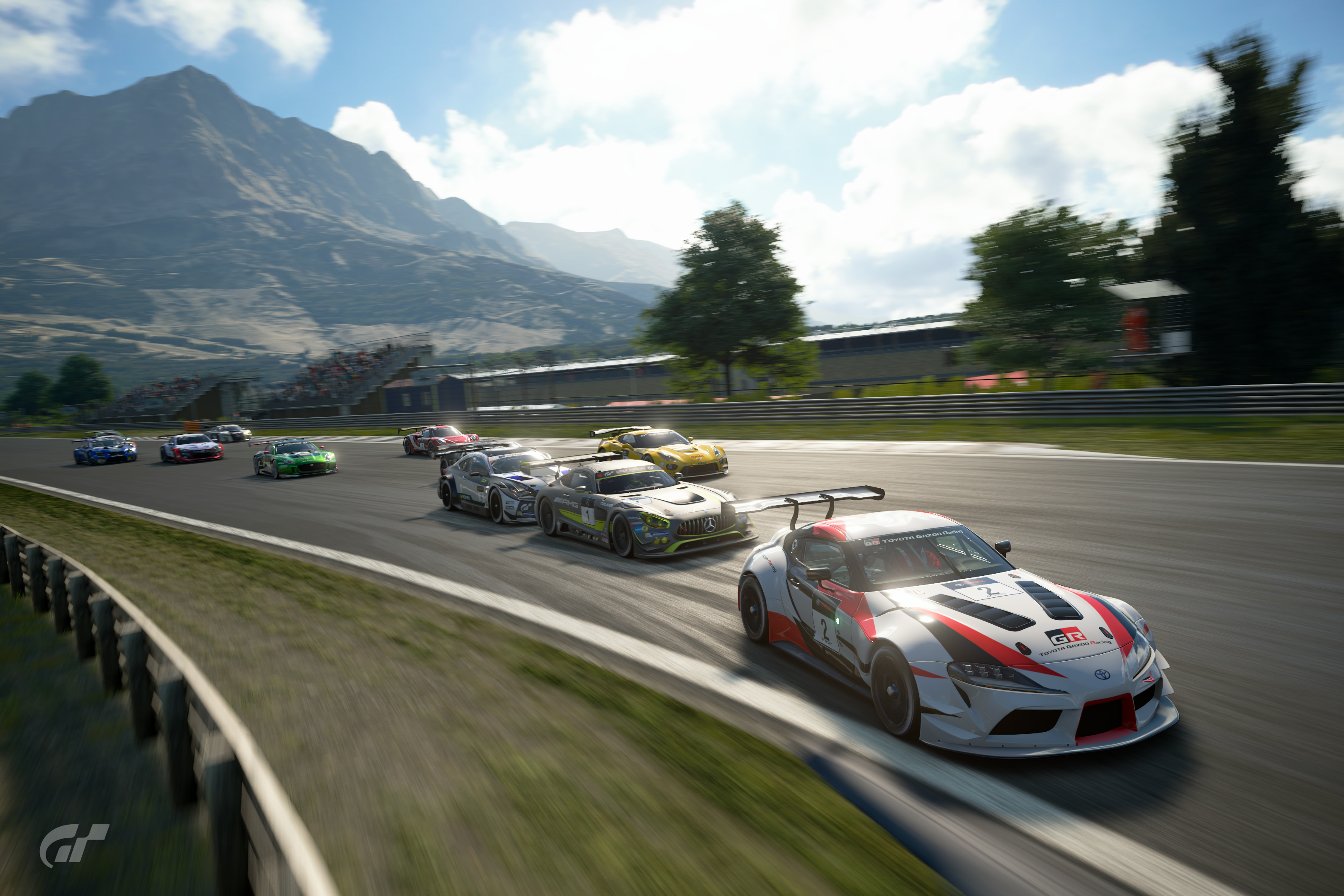 For most of the race, the action was focused on the middle of the pack, with the Aston Martin V12 Vantage, Alfa Romeo 4C, Jaguar F-Type, BMW, Chevrolet Corvette C7, and Ford GT LM Spec vying for 4th place. Porsche, meanwhile, in a surprising turn, with the Tokyo World Tour hero Angel Inostroza at the wheel, fell to the back of the field thanks to repeated incidents of contact with other cars. After switching to Matt Simmons of Australia, the 911 RSR sank further, to P10, when it was T-boned by the Corvette after it spun off the track.

At the end of Lap 12, Team Mercedes-Benz pitted to switch to soft tyres for a final charge to the finish. Toyota and Lexus were now both on hard compounds running 1-2, giving Mercedes-Benz driver Tom Lartilleux a nine second deficit to make up. The Frenchman drove with incredible skill, effortlessly reeling in the 3rd-place Ford GT driven by America’s Armen Aghakhan, which had moved up in position while the AMG GT3 was pitting.

As the Aston Martin of Fabian Portilla (Chile) and Brazilian Vinicius Neto’s Jaguar dueled for 7th place, Lartilleux finally caught the Lexus of Adriano Carrazza (Brazil) in the penultimate lap, after the Brazilian had valiantly fended off the hard-charging AMG GT3, but at the end, he couldn’t overcome the difference of speed between the hard- and soft-compound tires, estimated at about three seconds a lap. But this battle prevented the Mercedes-Benz from closing in on the Supra, with Rayan Derrouiche of France driving. Thus, the Supra cruised to a relatively easy victory, thanks in large part to excellent teamwork and phenomenal consistency from the Toyota’s trio of drivers who ran a near flawless race. 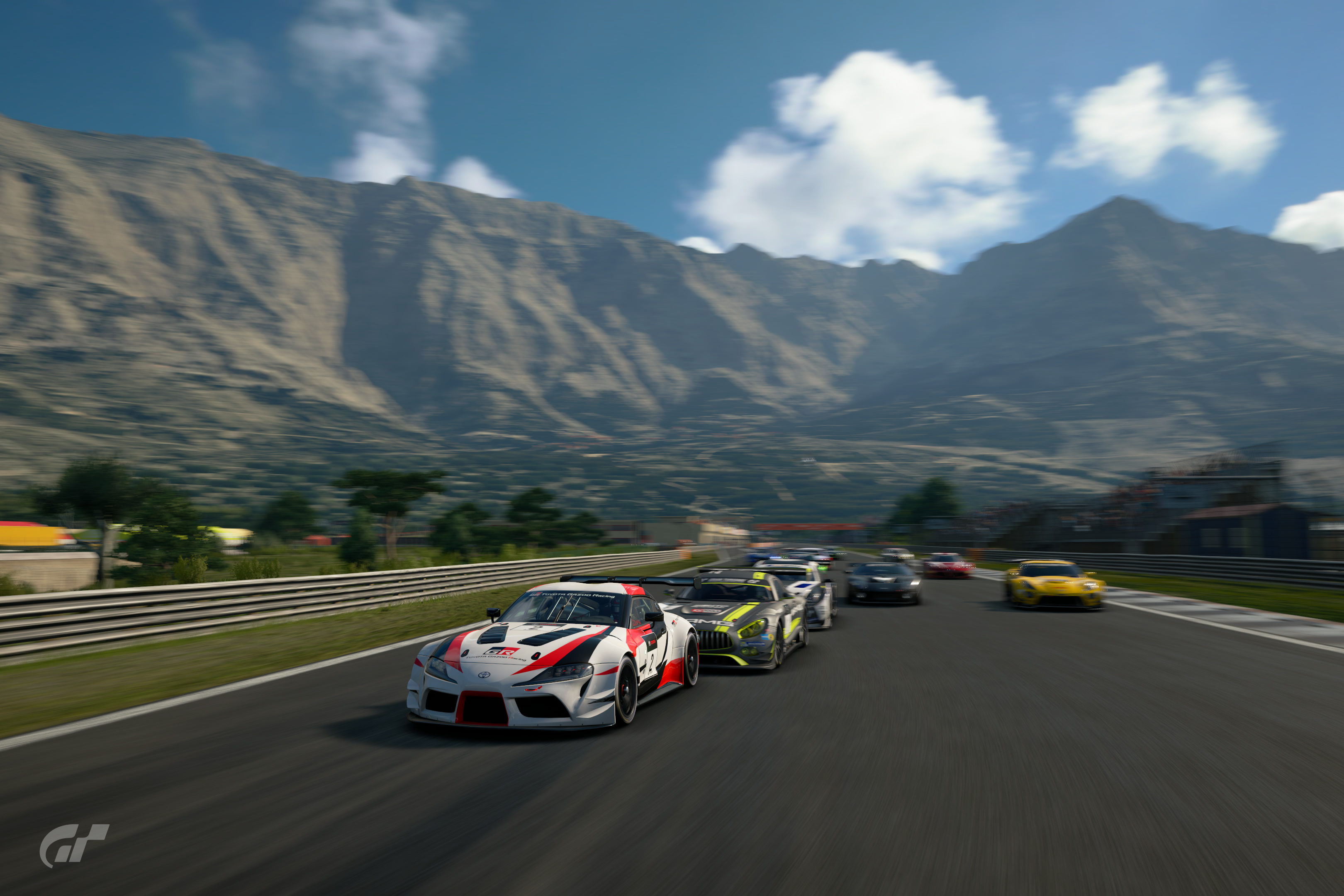 With another 12 points up for grabs for 1st place, the venue for the second race was none other than WeatherTech Raceway Laguna Seca, which was just introduced to Gran Turismo Sport this weekend. A favorite for many of the competitors, each team was tasked with completing 20 laps in Gr.4 racecars with the same general rules for Race 1: all three drivers required to drive a minimum five-lap stint and the use of all three tire compounds.

By winning the previous race, Toyota sat on pole, with Mercedes-Benz in the number-two slot and Lexus and BMW taking up the second row. Japan’s Tomoaki Yamanaka was first up for the Toyota team with his 86 on medium-compound tires, as Cody Nikola Latkovski of Australia took his position in the driver’s seat of the Mercedes-Benz SLS AMG shod with soft-compound tires.

The strategy of Mercedes-Benz was clear: overtake Toyota as early as possible and try to build up a big lead while on the soft-compound tires, which were roughly two seconds a lap quicker than the mediums. Things went exactly according to plan, when the SLS passed the 86 through Turn 5. Meanwhile BMW, piloted by Nicolas Rubilar of Chile in the BMW M4 jumped all over France’s Baptiste Beauvois in the Lexus RC F taking over 3rd place. 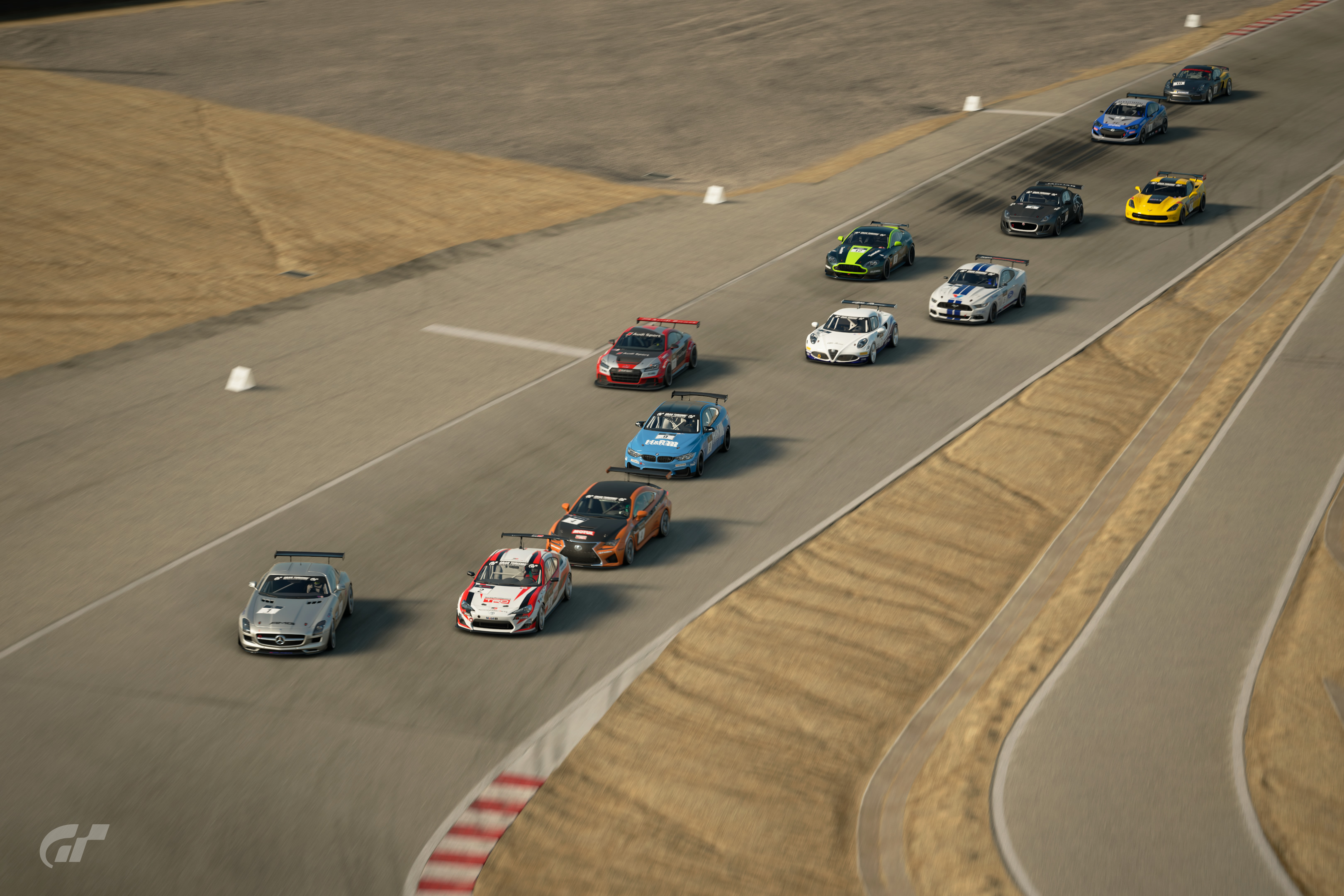 The Audi TT Cup, driven by driven by Tatsuhiko Kato of Japan, and the Alfa Romeo C4 with Alonso Regalado of Peru behind the wheel, found themselves in contention on Lap 4, while the Aston Martin V8 Vantage of Ayumu Takita (Japan) moved up two spots to 5th place. By this time, the Mercedes-Benz was beginning to pull away, building up a four-second lead.

Most of the cars came in for their first pitstop on Lap 6, but Mercedes-Benz and Lexus opted to stay out, getting as much as they could on their soft-compound tyres. On Lap 8, they came in, with Anthony Felix of the U.S. jumping into the SLS with hard-compound rubber, while Andrew Brooks of Canada tasked with piloting the RC F on mediums. 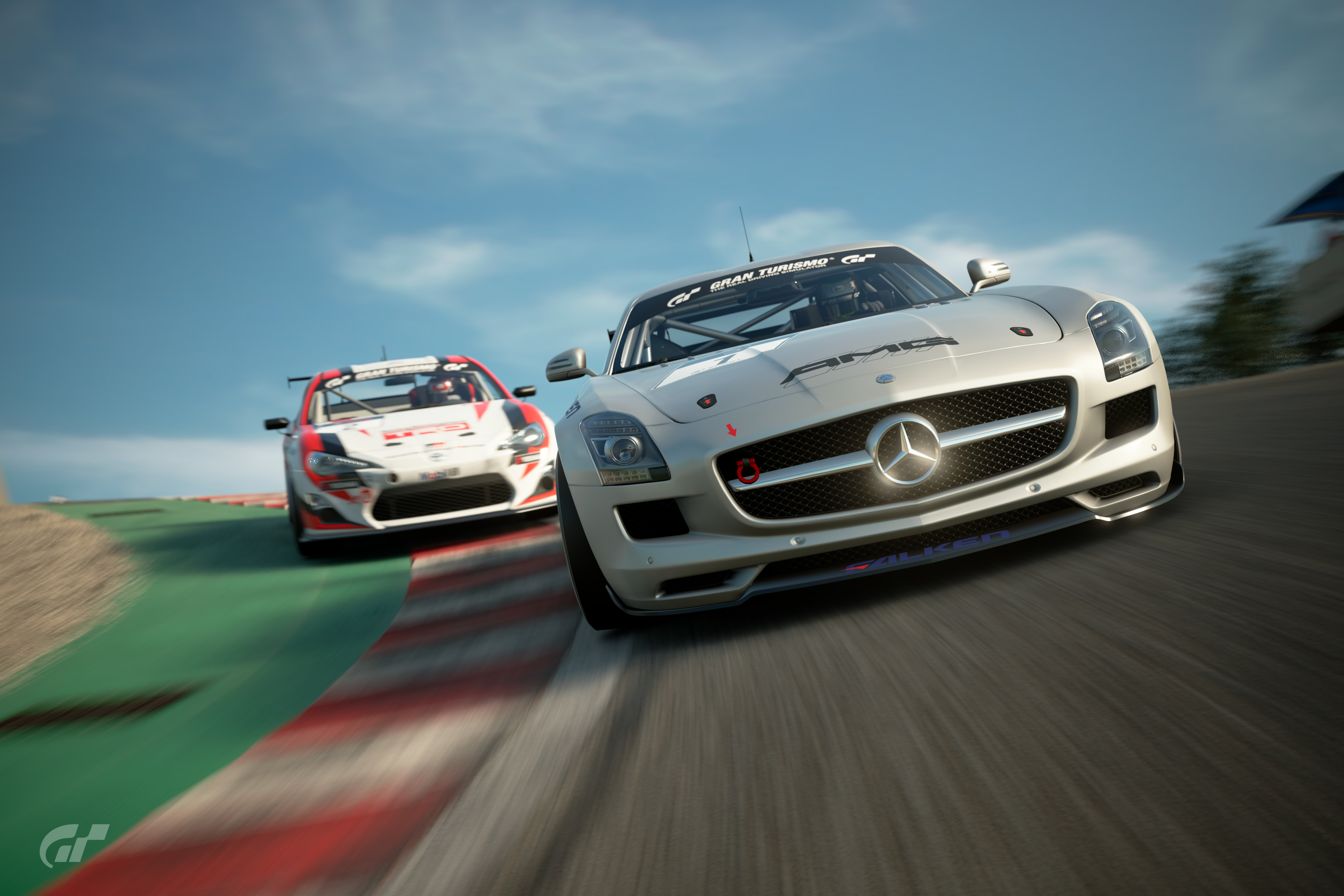 On Lap 12, the RC F finally caught the SLS AMG, thanks to its stickier tires and took the overall lead, but after the final pit-stop, Mercedes-Benz’s ace driver Cody Nikola Latkovski of Australia reeled in Adriano Carrazza of Brazil and overtook the Lexus on Lap 15. Meanwhile, the 3rd-place Toyota, driven by France’s Rayan Derrouiche was charging hard, ultimately passing the RC F through the Corkscrew on Lap 17 and driving up on the rear bumper of the SLS on Lap 19. The final lap was an intense two-horse race, as each driver refused to give an inch. It was a photo-finish as the Mercedes-Benz managed to cross the finish line by a slim 0.062-second margin, claiming pole position for the Grand Final. 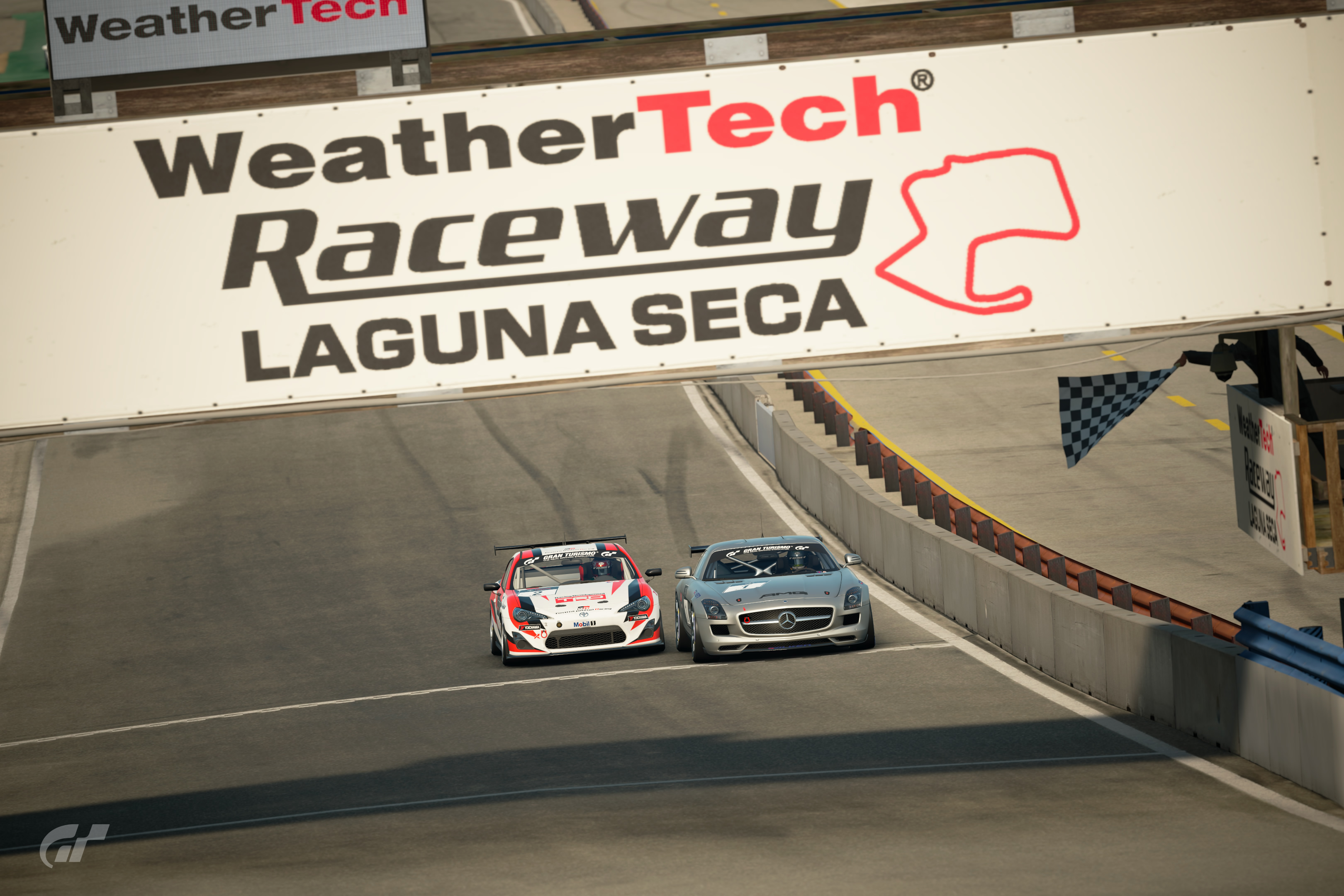 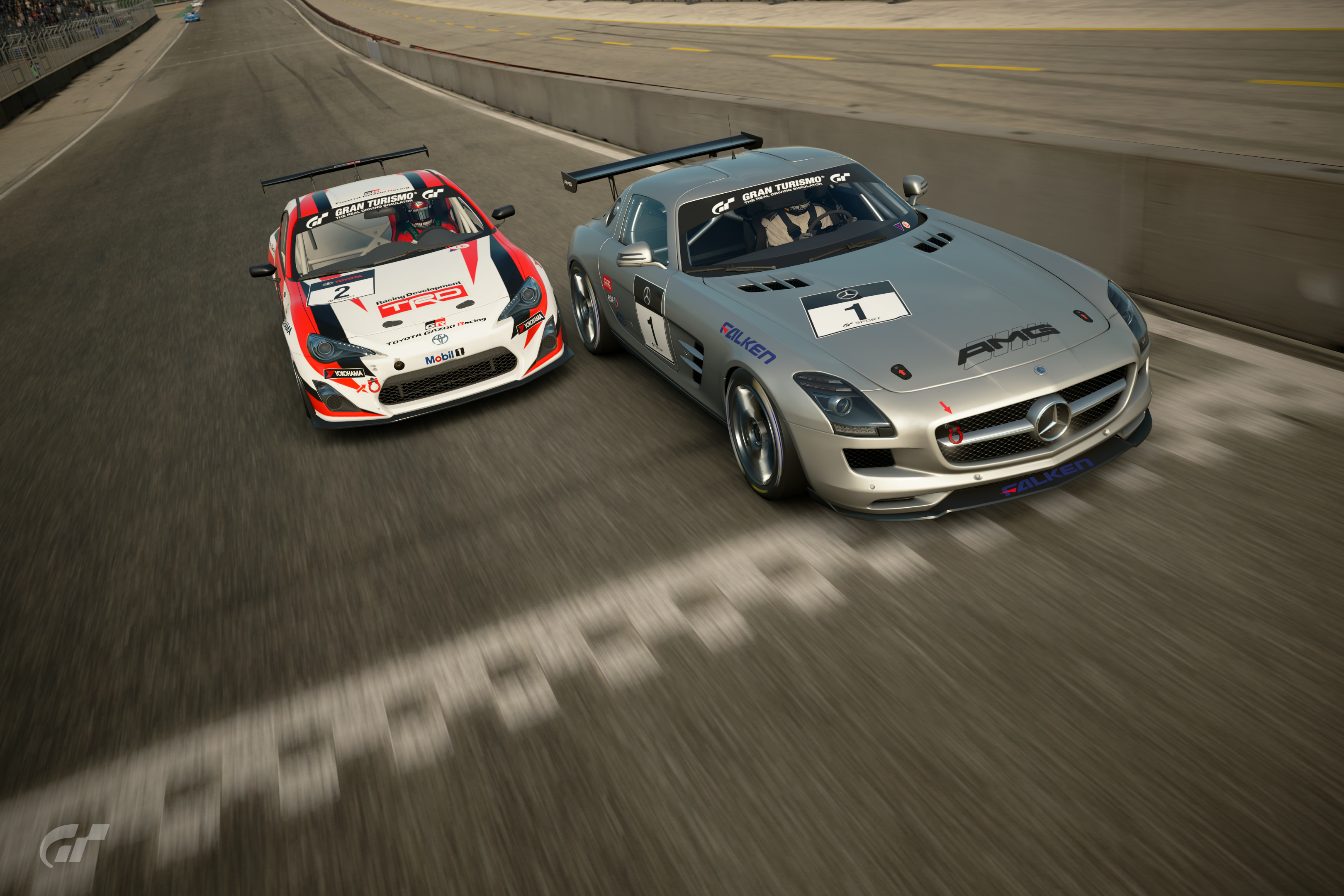 It all came down to the very final event of the year to decide which team would be crowned the king of the 2019 FIA Gran Turismo Manufacturer Series. With the points worth double for the Grand Final, the likes of BMW, Lexus, Alfa Romeo, and Aston Martin still had a chance to steal the title away from Mercedes-Benz and Toyota, which sat atop the leader board with 22 points each. Mercedes-Benz and Toyota adopted different strategies, with the German team going with its ace driver, Australia’s Cody Nikola Latkovski to start the race in the AMG GT3 on soft-compound tires, while Team Toyota went with Tomoaki Yamanaka of Japan in the GR Supra Racing Concept on the slowest hard-compound rubber. The venue was the always tricky Tokyo Expressway – South Inner Loop, where the narrow roads made for a bumper-car environment: Plenty of body paint was about to be swapped.

Yamanaka showed his skills early on, getting past Latkovski’s SLS AMG on Lap 1 of the 20-lap contest, despite being on the slower tires. BMW, with American Randall Haywood at the wheel, had a horrible start as the M6 GT3 went wide through the first corner and instantly dropped three spots to drop down to 6th. Things got bad to worse for Mercedes-Benz as a few corners later, Alfa Romeo got past with Japan’s Shogo Yoshida behind the wheel. 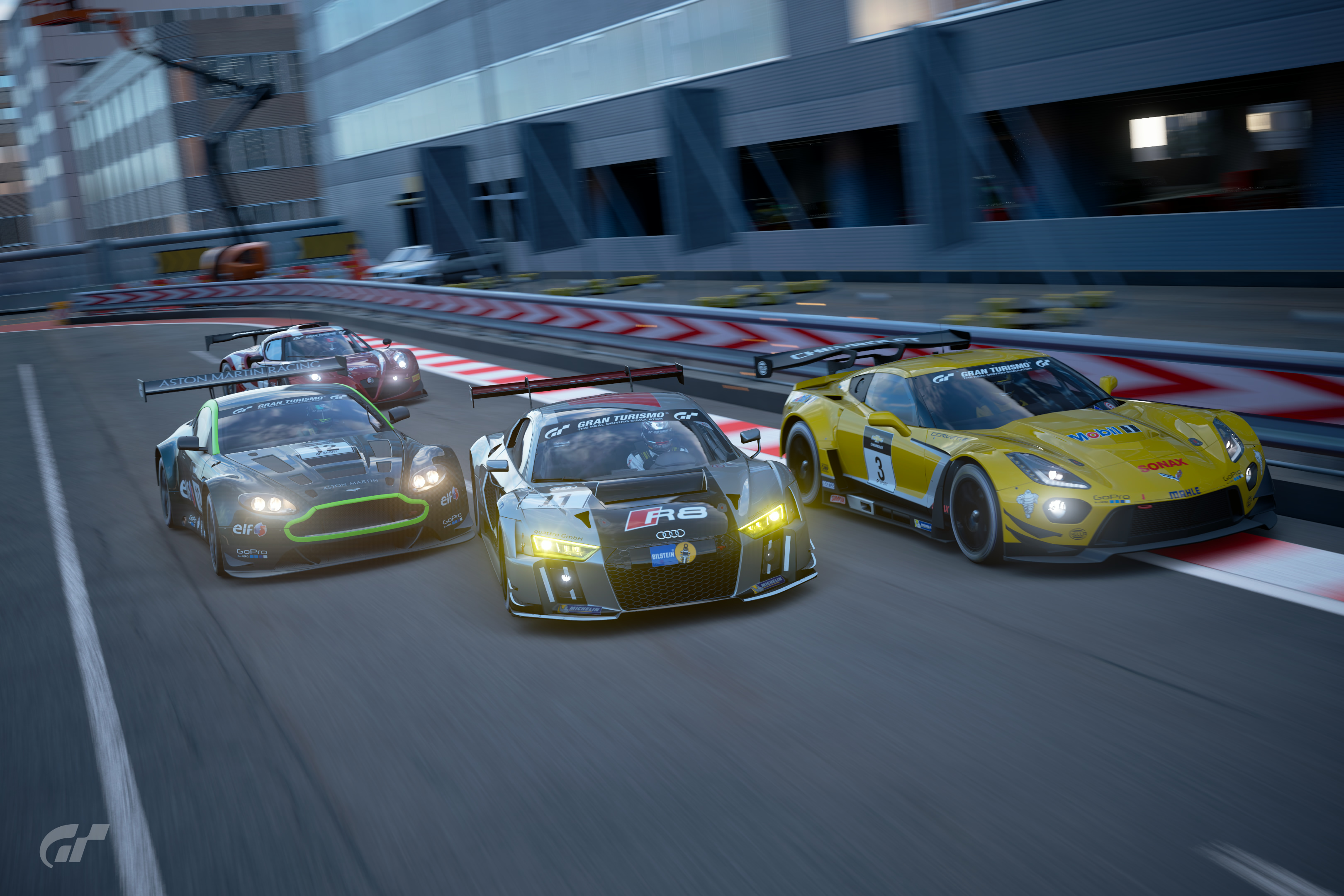 As the cars reached speeds of 260 km/h on the back straight, where the Mercedes-Benz regained its 2nd-place spot, the top eight cars were tightly packed with just a little more than a second separating them. The lead changed hands several times over the next few laps, with Toyota, BMW and Mercedes-Benz taking turns running up front, but by Lap 6, the top four teams began to pull away from the rest of the field. Every car except BMW dove into the pits, with Anthony Felix of the U.S. taking over the driving duties for Mercedes-Benz (on hard-compound tires), while Rayan Derrouiche of France took over the wheel of the Supra (also on mediums).

Derrouiche was able to get by Felix on the following lap to take the overall lead. This prompted the others to pounce on the Mercedes-Benz, bouncing the car around like pinball until it dropped to 6th place. While an intense battle brewed for P2 to P6, Toyota had built up a five-second lead by Lap 10, the half-way point of the race. In 2nd place at this point was the Alfa Romeo driven by Alonso Regalado of Peru and the Jaguar F-Type of Vinicius Neto of Brazil, the latter working his way up from the No. 9 spot on the starting grid. 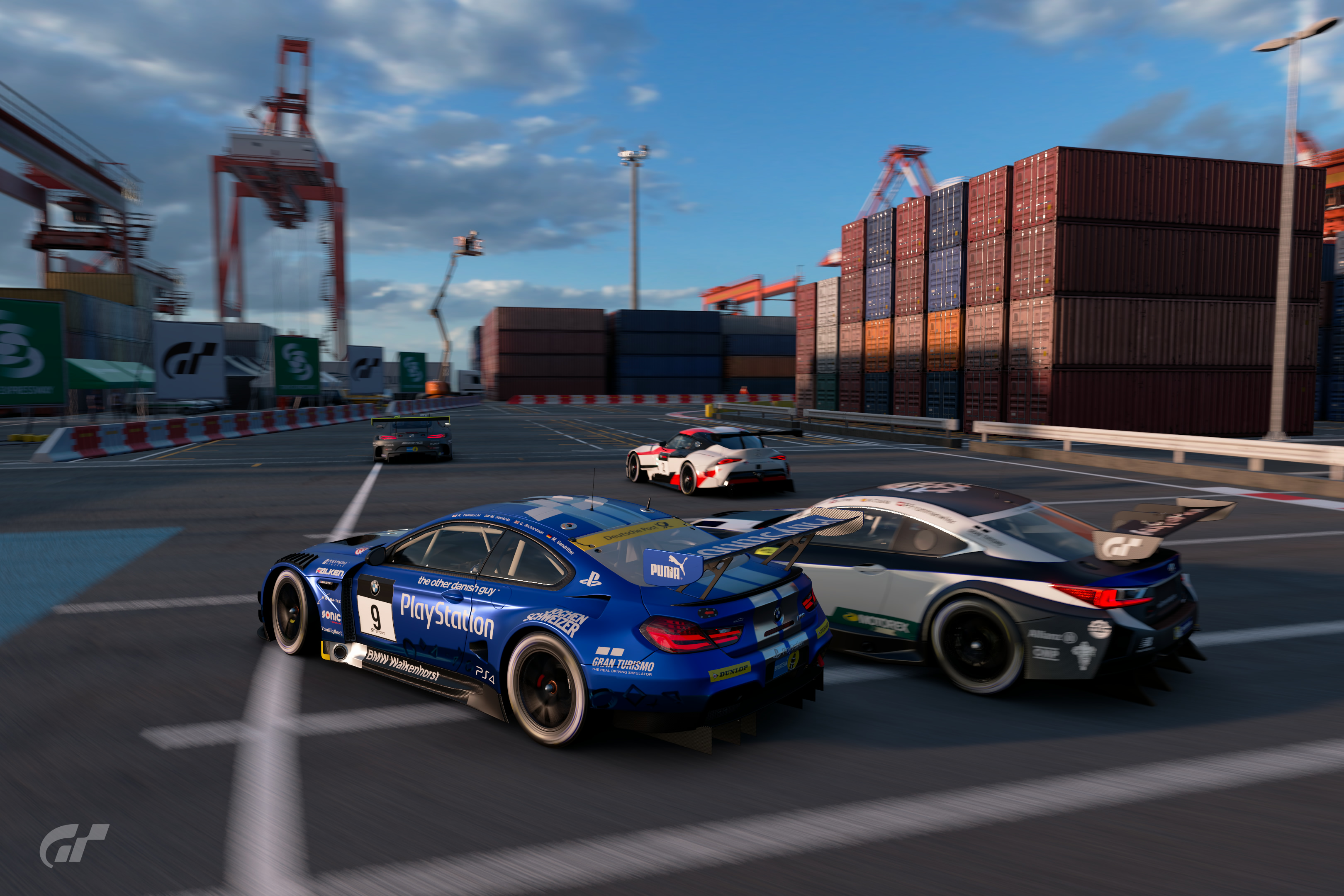 After the last pitstop, Fraga took over the wheel of the Supra on soft-compound tyres, while Mercedes-Benz anchor driver Tom Lartilleux (France) clawed his way back up to 2nd place by Lap 14, but the only way he would catch the Toyota, which had opened up a 10-second lead by this point, was if Fraga made a huge driving error; could lighting strike a second time? 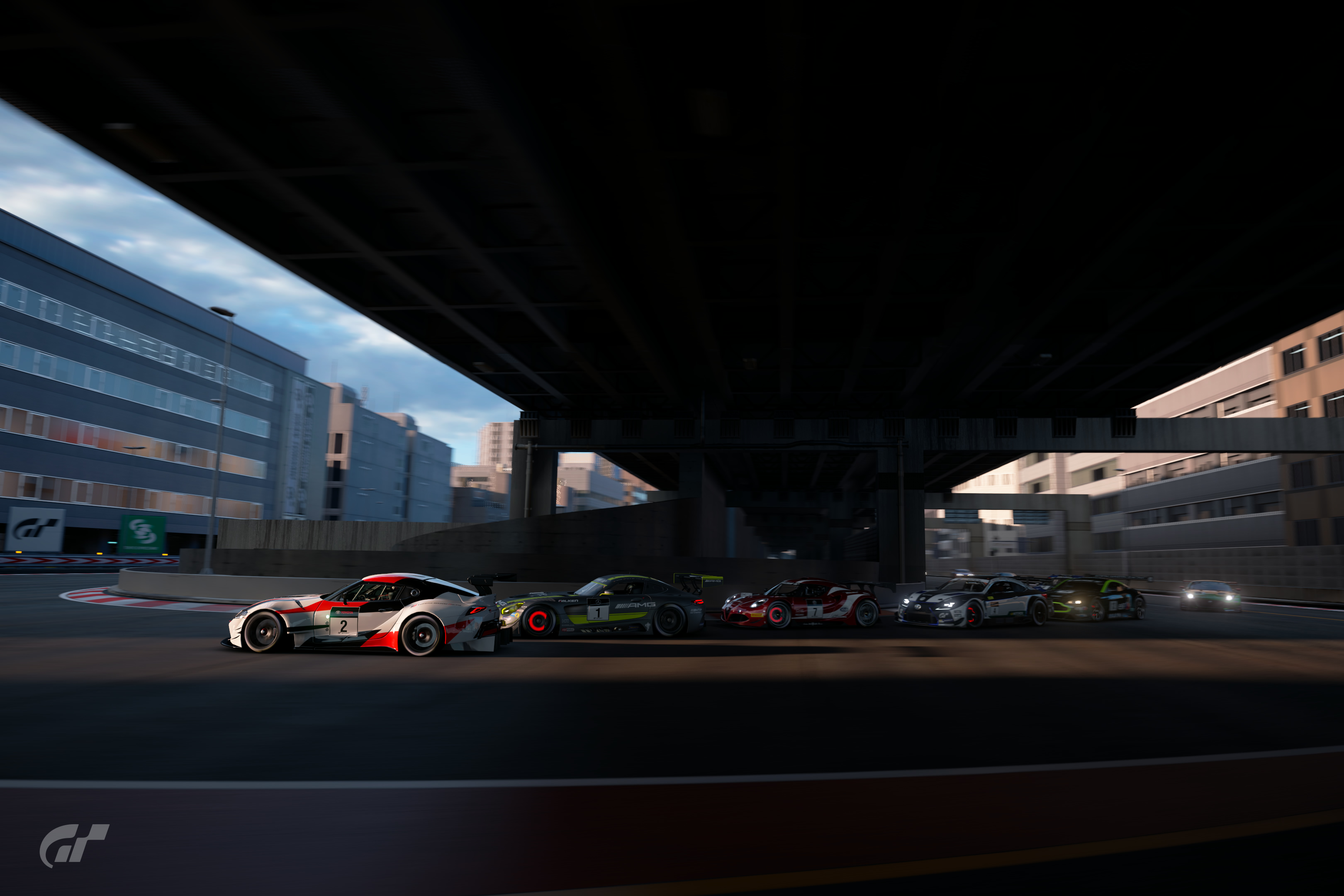 The final laps of the race saw the sudden appearance of the Chevrolet Corvette C7, driven by Japanese Koki Mizuno, which came out of nowhere to contend for 3rd place, moving up nine spots from the very back of the field. With the Supra all but assured of the win, the battle for the remaining two spots on the podium was just heating up. The audience members were on the edge of their seats as several cars passed and re-passed one another, but when the dust had settled, it was Mercedes-Benz that claimed 2nd place and, in a surprise to everyone, Team Chevrolet taking 3rd. 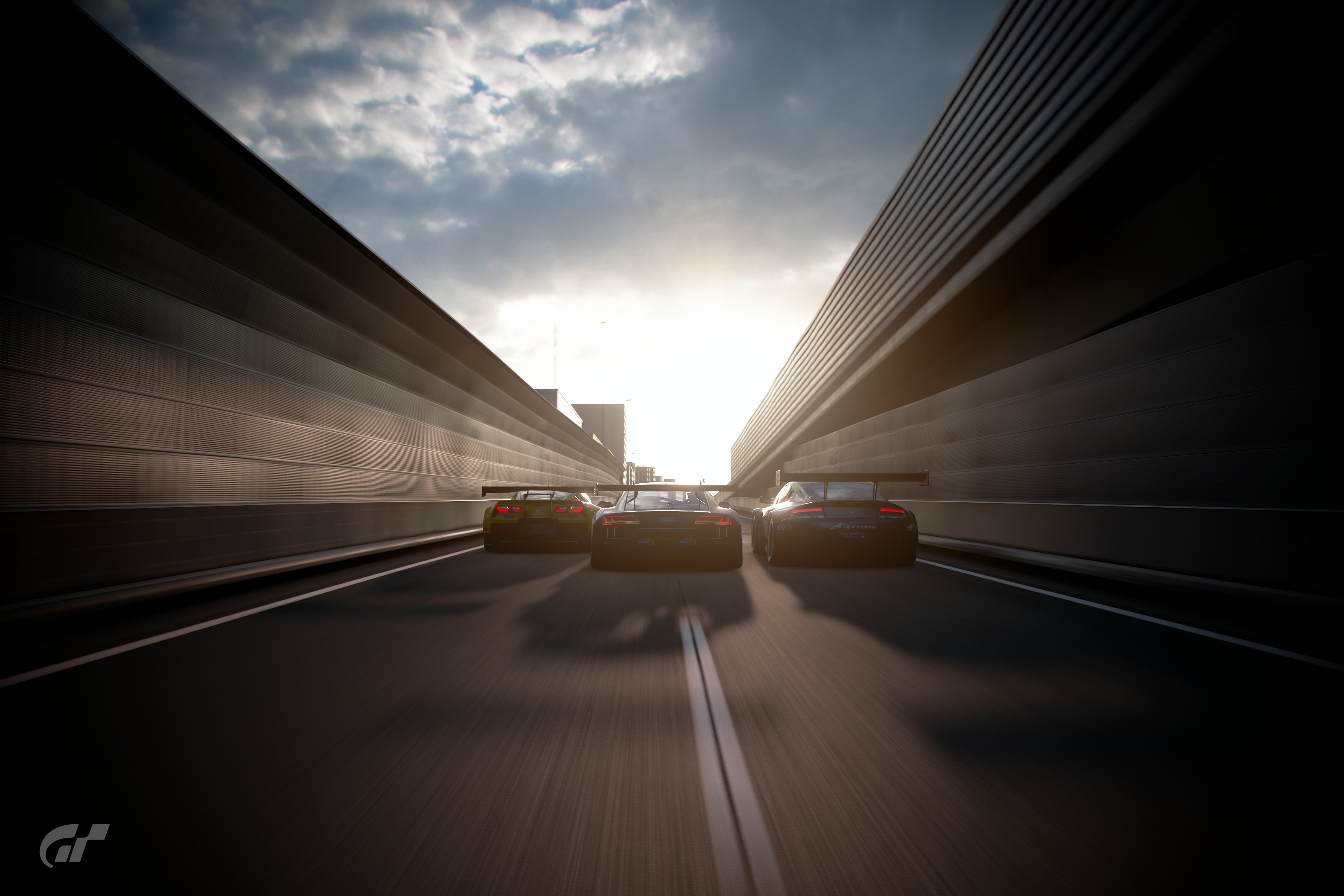 After the final points had been tallied up, Toyota had won the 2019 FIA GT Manufacturer Series title, followed by Mercedes-Benz, Alfa Romeo, Aston Martin, and Lexus, in that order.
For Fraga, it was vindication for his poor showing in the Nations Cup. He said after the race: “I have some mixed feeling after what happened yesterday, but I still had this goal of winning the Manufacturer Series remaining. I am very happy now because my team fulfilled what we set out to do, and I could not have done it without my team members, Tomoaki (Yamanaka) and Rayan (Derrouiche).”

Latkovski of runner-up Mercedes-Benz said: It’s great to be on the podium. I’m very proud of what we accomplished, but unfortunately the situation didn’t favor us, and we made some mistakes in strategy, but this is what happens in racing. I can’t say enough of Anthony (Felix) and Tom (Lartilleux), my teammates, and my hats off to Team Toyota for a great performance.”