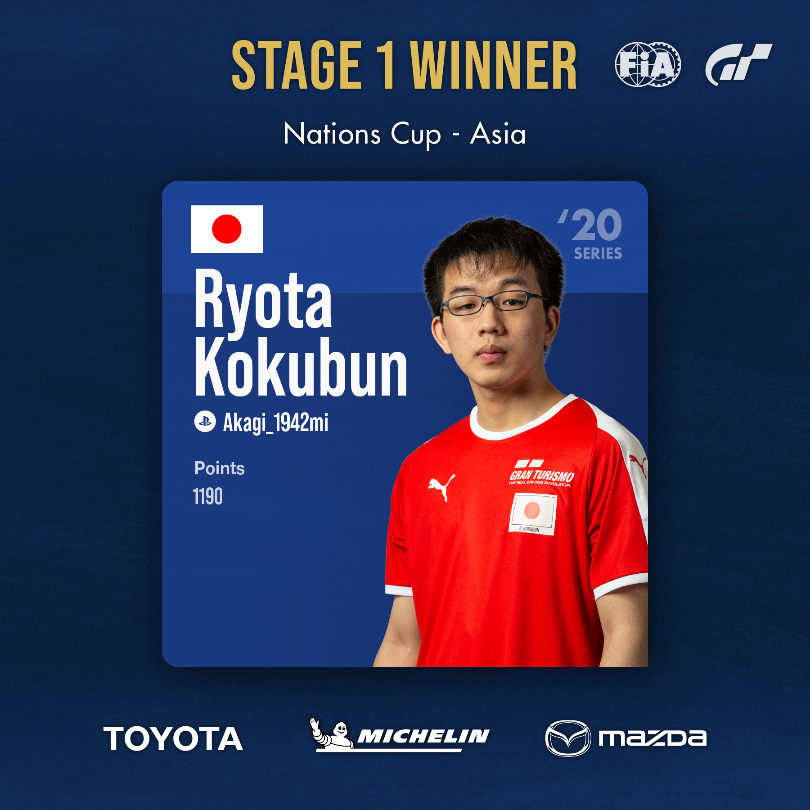 The first stage of the 2020 Nations Cup got underway on April 25th.

Reigning Asian champion Ryota Kokubun was simply untouchable throughout the first stage, winning Rounds 3 and 4 to build up a huge lead at the top of the table.

Two of his main rivals for the top spot, fellow Japanese Miyazono (Kerokkuma_ej20) and Yamanaka (yamado_racing38), both fared rather poorly in Round 3, but roared back in Round 7 to breathe new life into the race for top spot.

The final race of Stage 1 featured Gr. 1 cars, and took place on the Circuit de Spa-Francorchamps.
Long-time rivals Miyazono and Yamanaka ensured that the front row of the grid was all-Japanese, but the second row featured some unexpected faces. Neither Thailand's Sirigaya (PSC_themiang_GT1) nor China's Huang (Pikachiu_GT1) were in the top 10 before the final race, but they both performed fantastically in qualifying to take third and fourth place on the grid respectively.
Overall leader Kokubun had a disappointing qualifying session, and had to settle for ninth place on the starting grid.

Miyazono, having opted for soft tyres, got off to a storming start, as did Huang and Sirigaya, both of whom had made the same tyre choice. Yamanaka's position was under pressure from the get-go.

Indeed, Yamanaka was struggling to such an extent on his medium tyres that he was soon overtaken by his compatriot Sugawara (blackbeauty-79).

The first lap saw an accident take place, on the Les Combes corner. Some wild driving from Sugawara forced Huang off the track, and caused him to fall down to fifth place. Yamanaka was able to take advantage, and moved up to third. The fierce competition that was developing among the chasing pack was good news for Miyazono in the lead, as his race simply became easier and easier.

On the third lap, Yamanaka switched from medium to soft tyres, a pit stop which saw him rejoin the race in sixth place, just behind Kato (Tatsukt) and Huang, who were fighting hard for fourth.
Their two cars were lined up alongside each other going into the final corner, when Yamanaka decided to make his move. The manoeuvre left Kato with nowhere to go and he suffered a bad crash into the chicane wall. Yamanaka suffered no penalty as a result, but there's no doubt that it was a very risky bit of overtaking.

By the ninth lap, Miyazono had a lead of over 10 seconds on his nearest challenger. He decided it would be a good time to take a pit stop and switch from soft to medium tyres.

By the 14th lap, both Sugawara and Yamanaka had already used soft tyres twice, meaning that they had no chance of being able to challenge for the lead unless they took yet another pit stop.

The final lap saw the leaders all make their mandatory tyre change. Miyazono had driven a perfect race, making the most of his pole position and executing his two-stop strategy to perfection.

Alas, the points he earned weren't quite enough to change things at the top of the leaderboard, and Kokubun clung on to take the first stage.

Both Sirigaya and Huang also deserve a special mention. While they finished the race toward the middle of the pack, the speed they showed in qualifying should ensure that the Japanese team will be looking over their shoulders from now on.