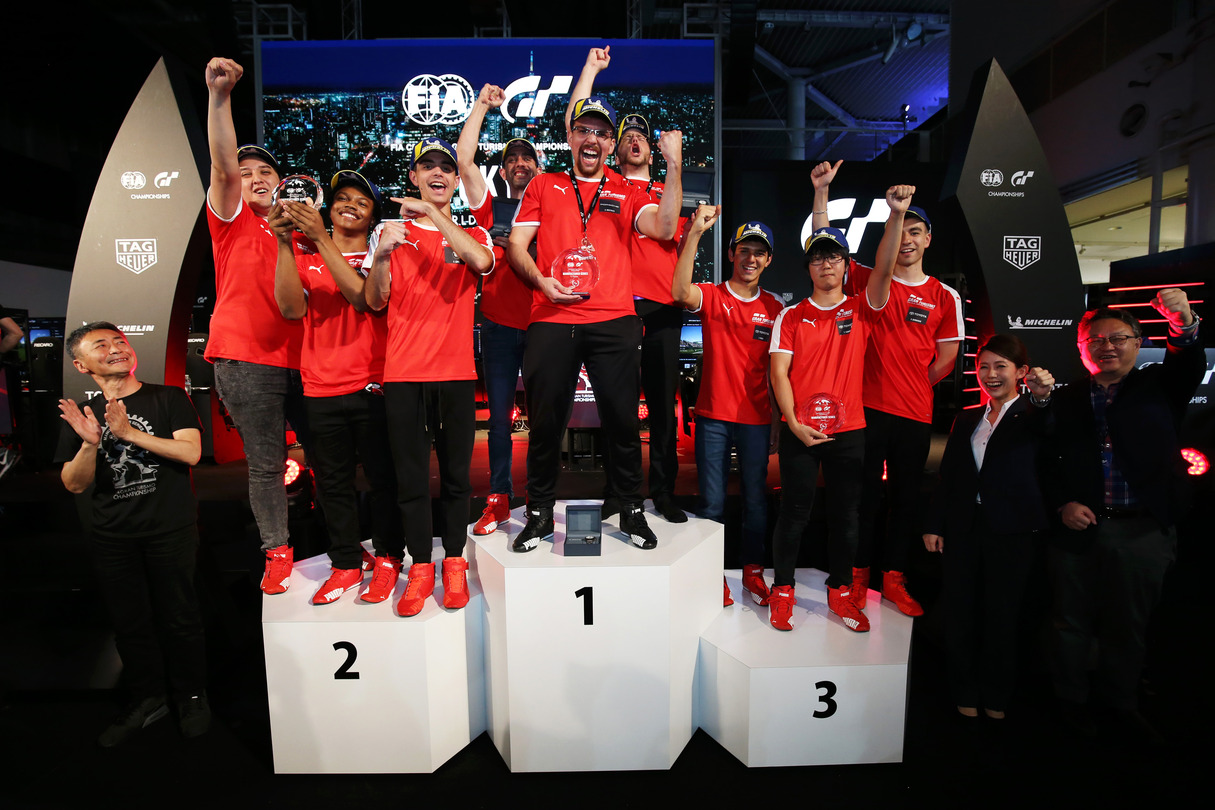 TOKYO, Japan (October 26, 2019) – Playing an integral part of the 46th Tokyo Motor Show, the FIA Certified Gran Turismo Championships 2019 Series held its fifth World Tour round at the Mega Web Toyota City Showcase alongside numerous future cars and concept models on display throughout the Odaiba area. Hundreds of local onlookers packed the arena to root their home team of Toyota in the Manufacturer Series, but it was not to be as Porsche turned in the performance of a lifetime to win the day and avenge Toyota’s Round 2 victory at its home track (Germany’s Nürburgring).

The Manufacturer Series features 36 drivers representing 12 teams in two races, with the second, the Grand Final, worth double points to the teams. Each race requires a stint by all three drivers and the use of all three different-compound tires (soft, medium, and hard) for a minimum number of laps.

‘World Tour 2019 – Tokyo’ is the final stop on the 2019 calendar before the all-important World Finals that take place in Monaco from November 22 to 24 and will decide the Nations Cup and Manufacturer Series champions.

The starting grid for the first race was determined by the Qualifying round, followed by the Top 6 Qualifying session, which saw the Toyota GR Supra Racing Concept, driven by the formidable lineup of Igor Fraga (Brazil), Tomoaki Yamanaka (Japan) and Rayan Derrouiche (France) take pole position. The heavy hometown favorites were followed by Team Porsche in the 911 RSR, Team Ford’s GT LM Spec II and Team BMW in the M6 GT3. The challenge was 13 laps around Australia’s tricky Mount Panorama Racing Circuit. 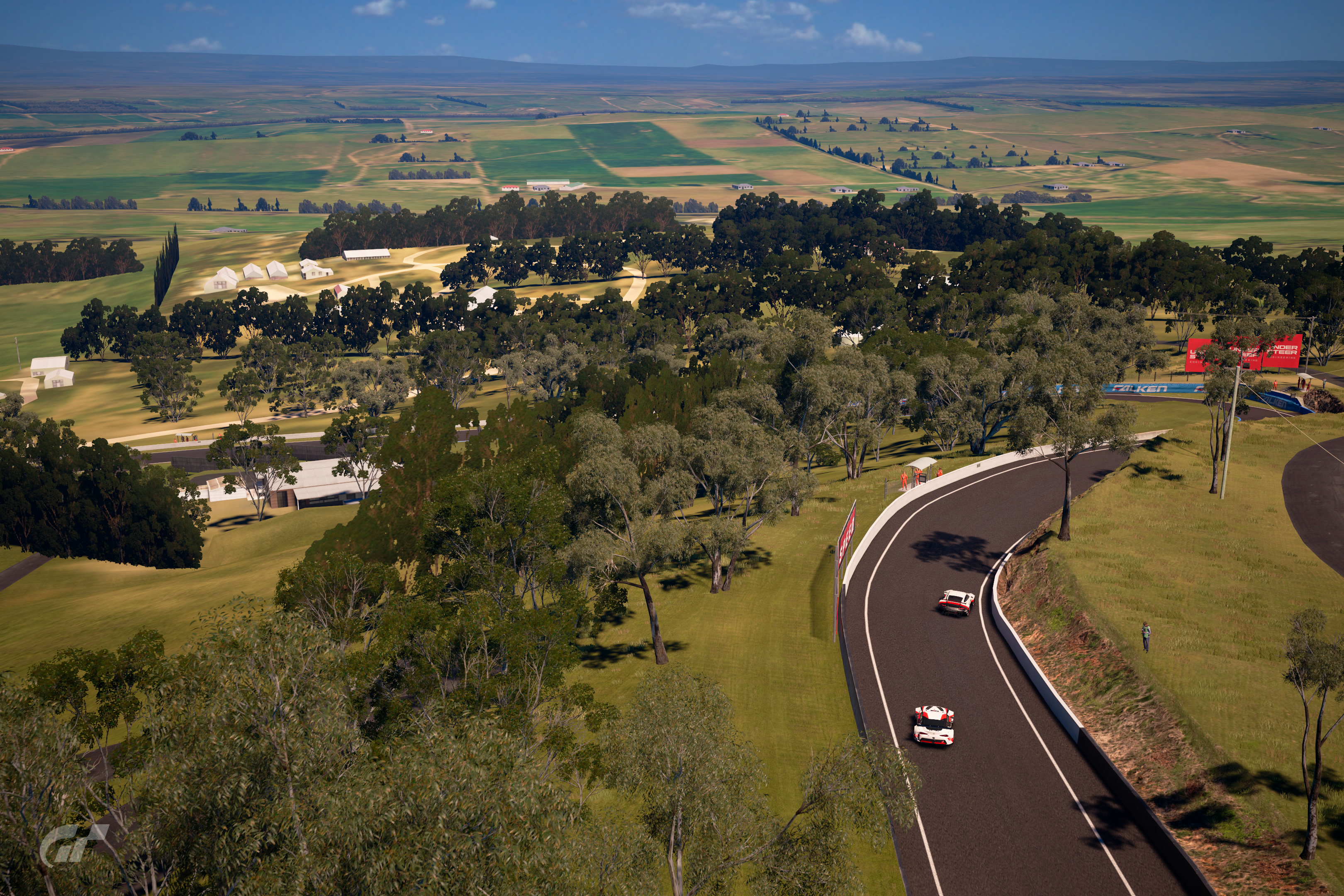 The drama began as soon as the green flag dropped. The Audi R8 LMS driven by Japan’s Tatsuhiko Kato, who started in 6th position, moved up to 3rd in the blink of an eye. Fraga, the reigning World Champion, made an uncharacteristic error going wide through Turn 3, and briefly gave up the lead to Porsche’s Matt Simmons (Australia) before taking it back a few corners later. It then became a two-horse race as Fraga and Simmons, both starting on soft-compound tires, pulled away from the pack. By Lap 4, they had opened up a 7-second lead, leaving the others to battle for 3rd. 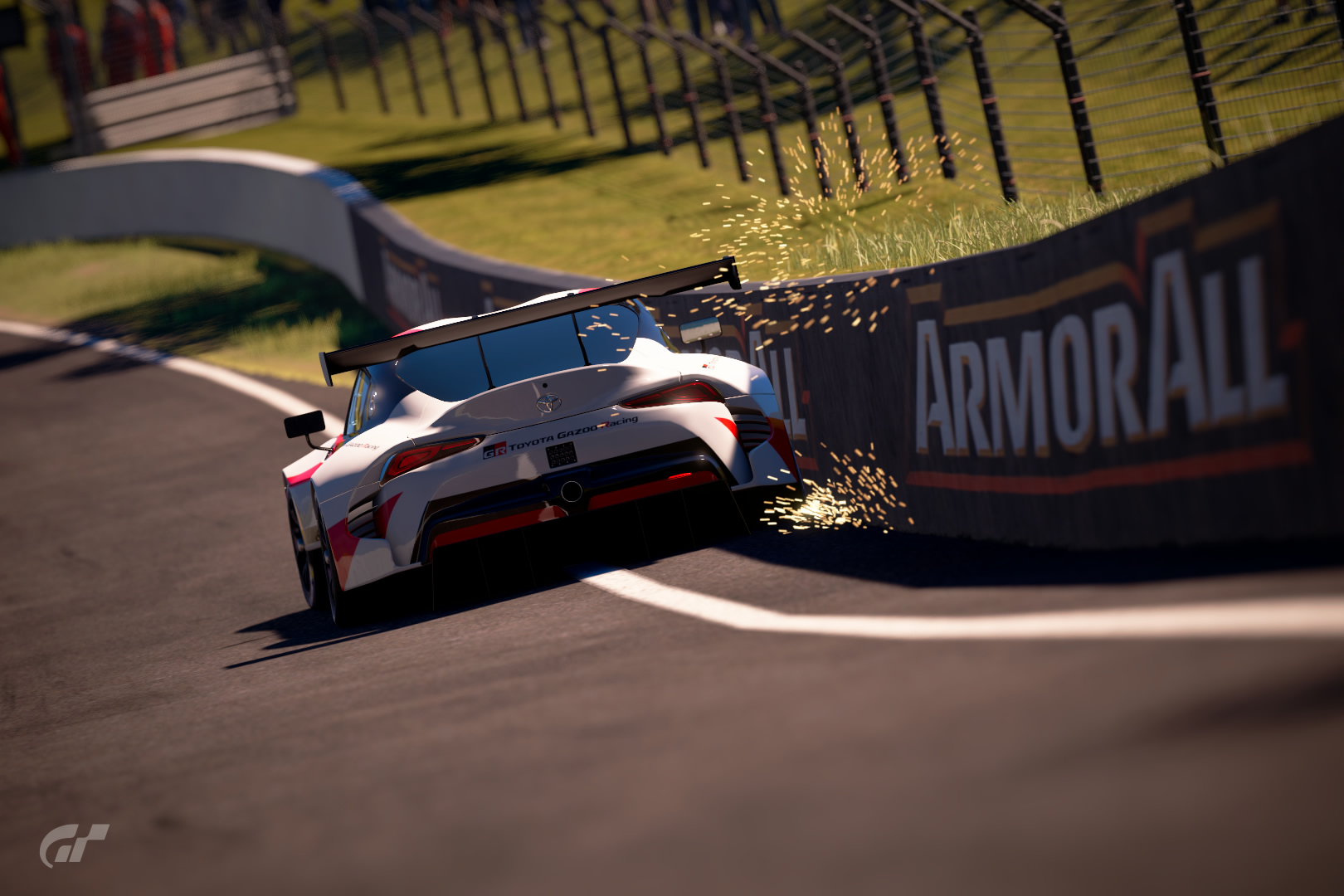 Among them was Mercedes-Benz, with Cody Nikola Latkovski behind the wheel. The Australian climbed from 8th to 4th position, but his momentum was halted by a one-second penalty for making contact with another car, allowing BMW’s Nicolás Rubilar (Chile) to maintain 3rd place. All the while, the Audi R8 LMS dropped to 5th, a result of the medium-compound tires that were noticeably slower than the soft-compound rubber of the race leaders. 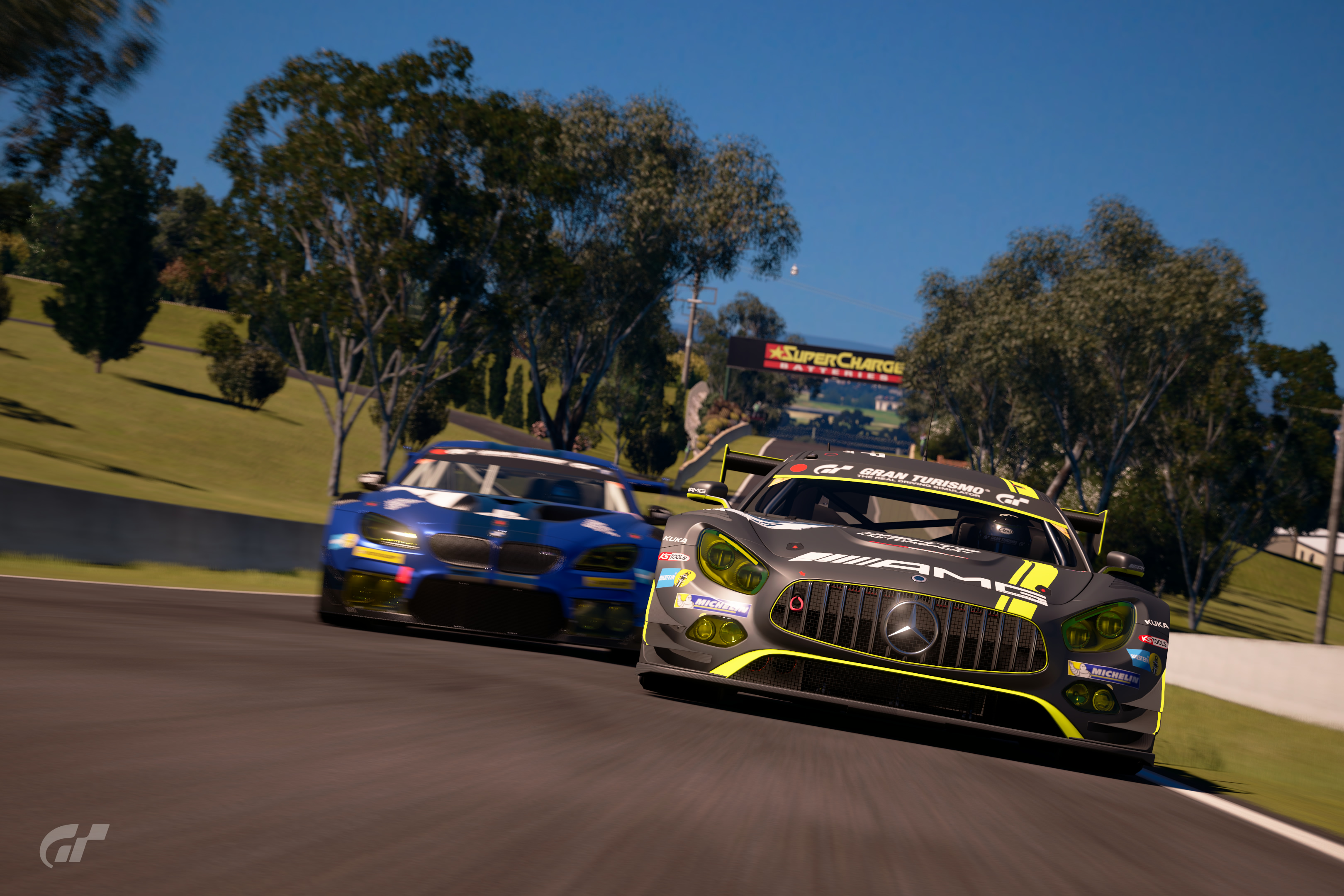 On Lap 4, the Aston Martin V12 Vantage, driven by Japan’s Ayumu Takida, nudged the Lexus RC F Gr.3 with Baptiste Beauvois of France behind the wheel, forcing the Lexus to spin and take out the Jaguar F-Type piloted by Vinicius Neto (Brazil) and the Hyundai Genesis Gr.3 driven by the USA’s Kevan Pounder. As a result, Aston Martin was awarded a huge 5-second penalty, putting the British make out of contention.
Lap 5 saw most of the cars make their first pit stops for new tires and a driver change. The running order remained consistent for the next several laps, with the top three spots occupied by Toyota, Porsche, and BMW. 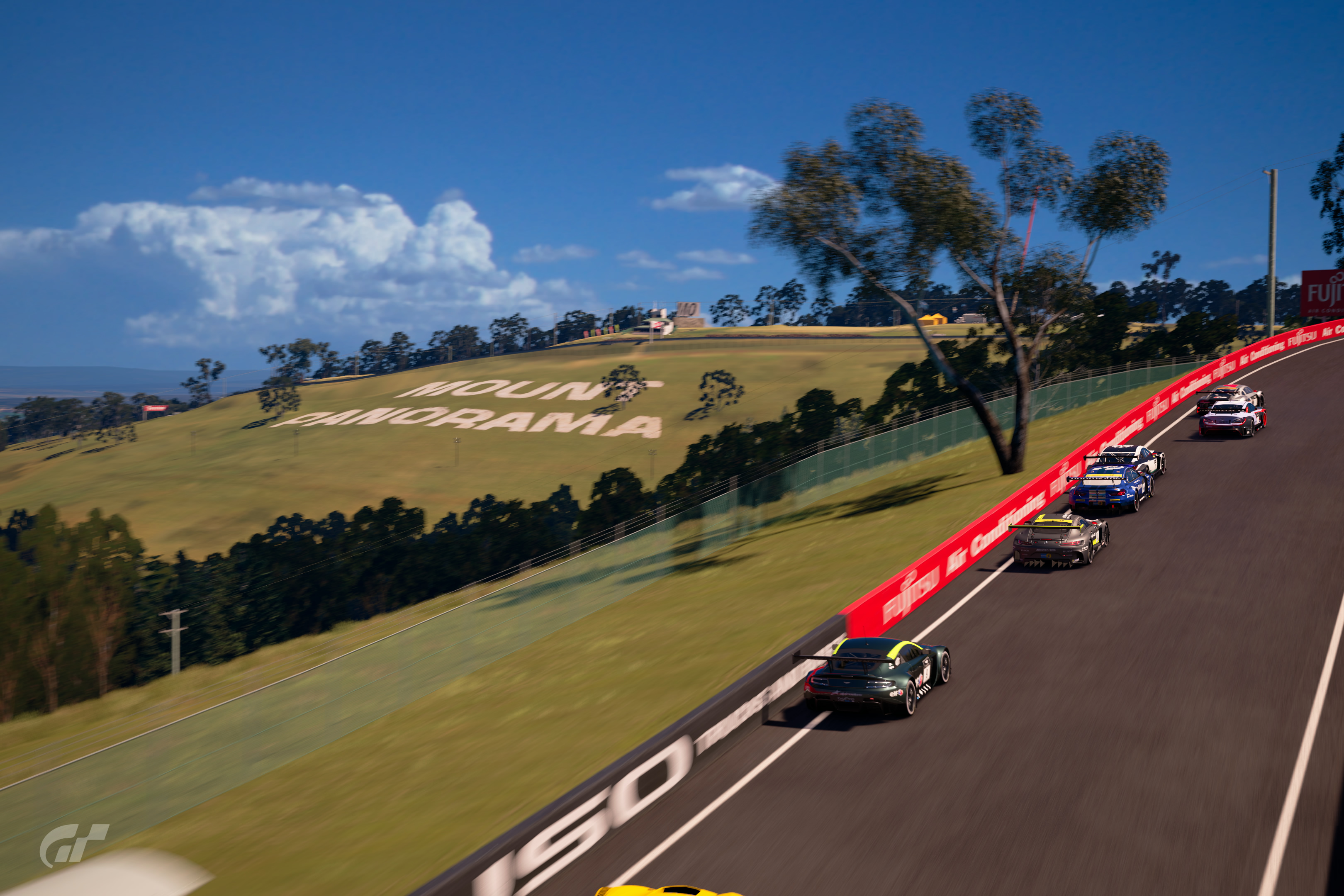 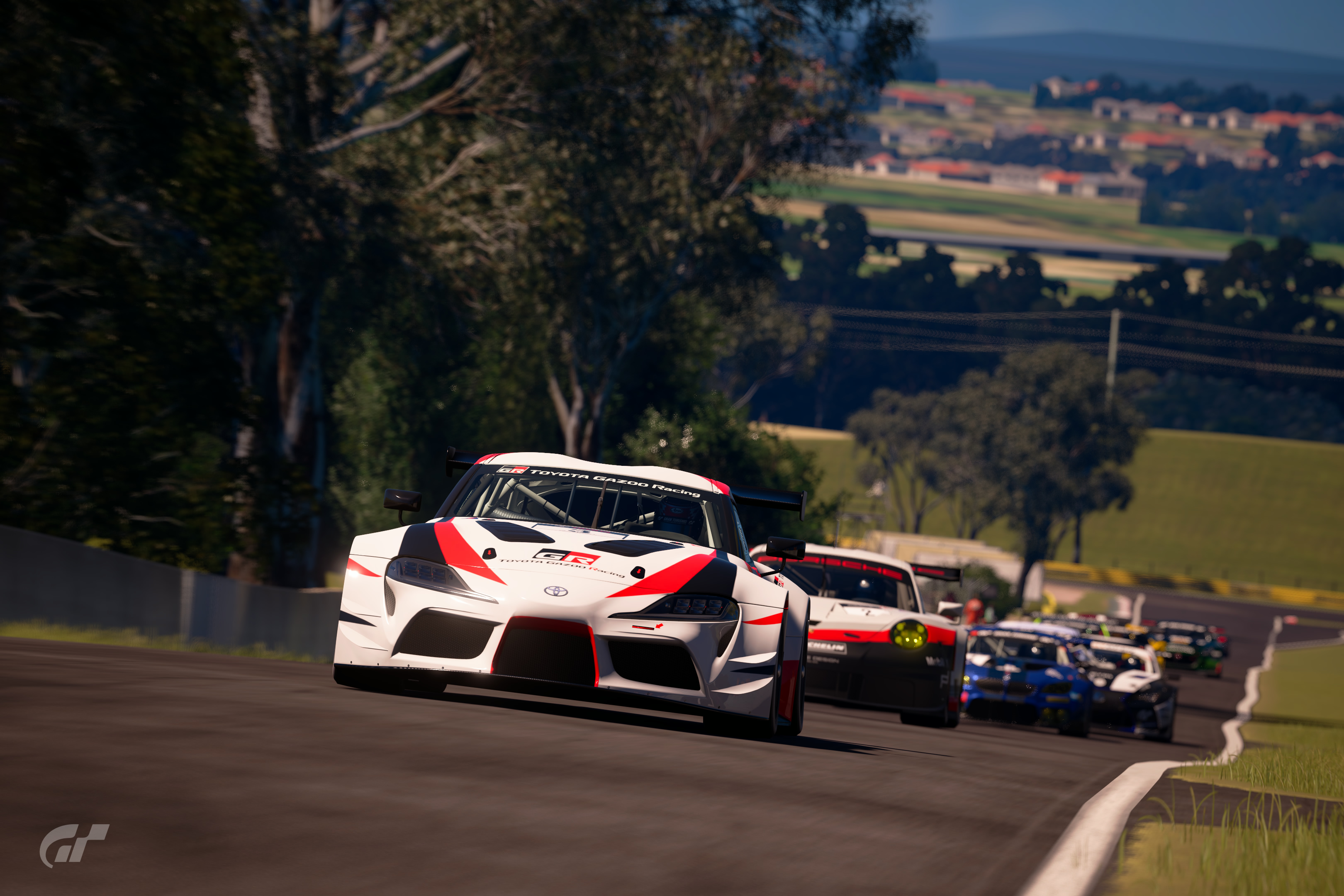 As Toyota built up a 9-second cushion with Derrouiche at the wheel, an intense battle was taking place behind the leaders. Mercedes-Benz’s Tom Lartilleux (France), on soft-compound tires, charged forward like a man possessed, claiming his first victim, the Audi R8 driven by Hayden Hunter of New Zealand, before moving on to pass the BMW M6 driven by Randall Haywood (USA) on Lap 12. This impressive bit of driving earned Mercedes-Benz a 3rd-place result, while Toyota and Porsche cruised to a relatively easy 1-2 finish.

With the points worth double of that of the previous race for the Grand Final, it was still anybody’s series to take. Thanks to its impressive win in the Semi-final, Toyota sat on pole again, followed by Porsche and Mercedes-Benz—but unlike the other two that opted for soft-compound tires, Porsche decided to start on medium-compound rubber, a move that would pay huge dividends at the end of the race. The 18-lap contest in Gr.3-grade racecars around the scenic Autodrome Lago Maggiore GR circuit started with the BMW M6, driven by Rubilar, setting the tone of the race by immediately pouncing on Lartilleux’s Mercedes-Benz and then getting by the Porsche 911 driven by Simmons. By the end of Lap 1, Rubilar had moved up two positions to 2nd place. 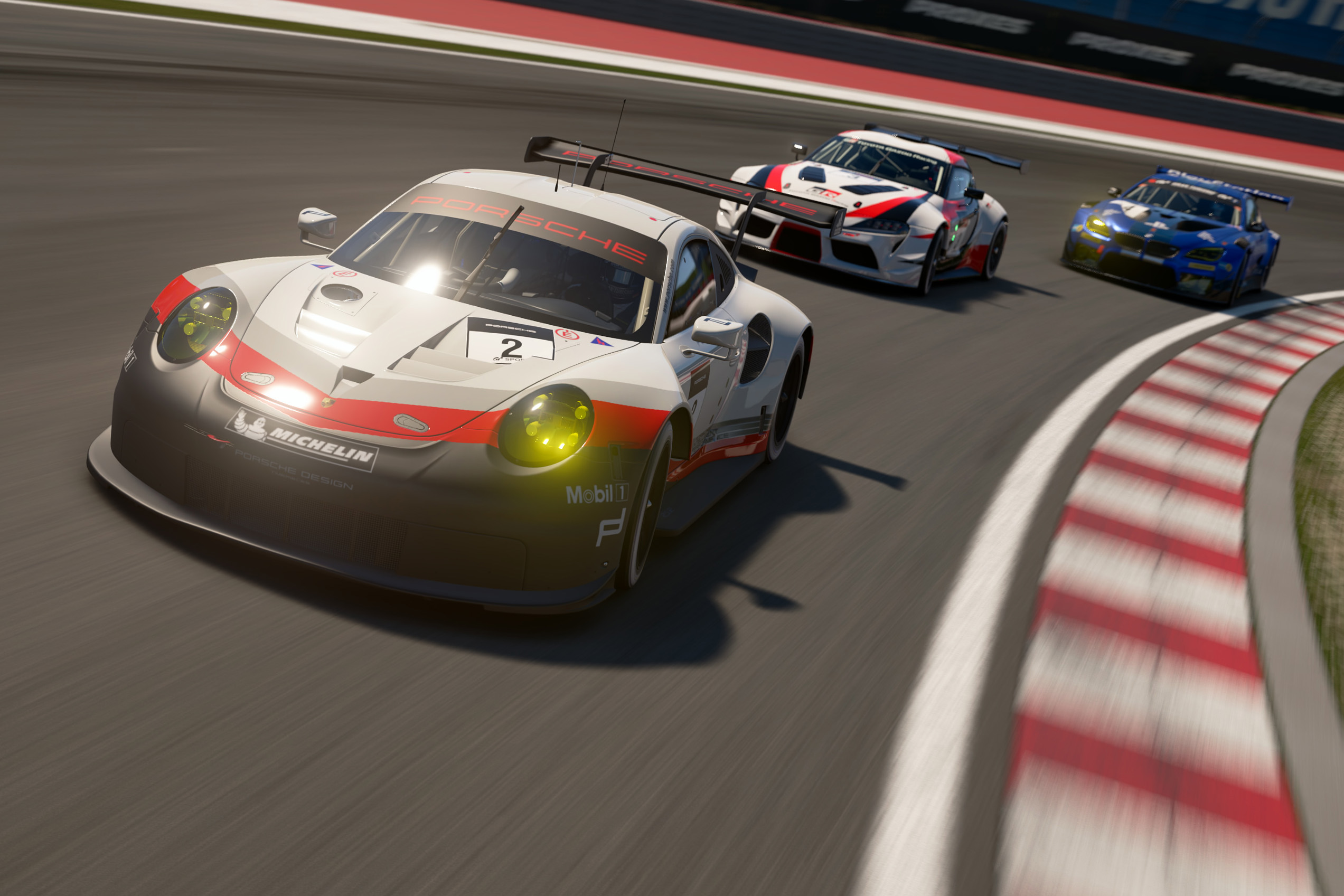 By Lap 5, Porsche struggled to maintain pace on the medium-compound tires and dropped to 5th place. When it made its first pit stop, the team took everyone off guard by switching to hard-compound tires. Team Porsche had decided to risk it all and save the soft-compound tires, the fastest of the bunch, for the end of the race. So, the burden of trying to keep pace with the leaders in the middle part of the race fell onto the shoulders of the USA’s Tristan Bayless. Immediately, it looked as if the plan had backfired when the Ford GT driven by Ádám Tápai of Hungary overtook Bayless for 6th place, dropping the Porsche 911 to P7. Ford kept its momentum going by getting past the Audi R8 driven by Hunter to take over 4th.

On Lap 11, Porsche dove into the pits, handing the driving duties to Angel Inostroza of Chile, an unknown quantity in his first World Tour event. At long last, the Porsche would be going to the soft-compound tires, while most everyone else were on hards or mediums, but did Inostroza have the skills to make it count? He soon answered his critics by catching the seasoned Latkovski in the Mercedes-Benz, who was on medium-compound tires, and setting up a three-car duel for 4th place. On Lap 14, the Porsche and Mercedes-Benz jumped all over the Lexus RC F, driven by Brazil’s Adriano Carrazza, as they went three-wide on the back straight. The Lexus ended up spinning off the track on Turn 10, as Inostroza ultimately won the three-way battle getting past Latkovski for 4th place. Now, the Chilean newcomer was in a position to go after the 3rd-place Ford GT driven by the USA’s Armen Aghakhan. 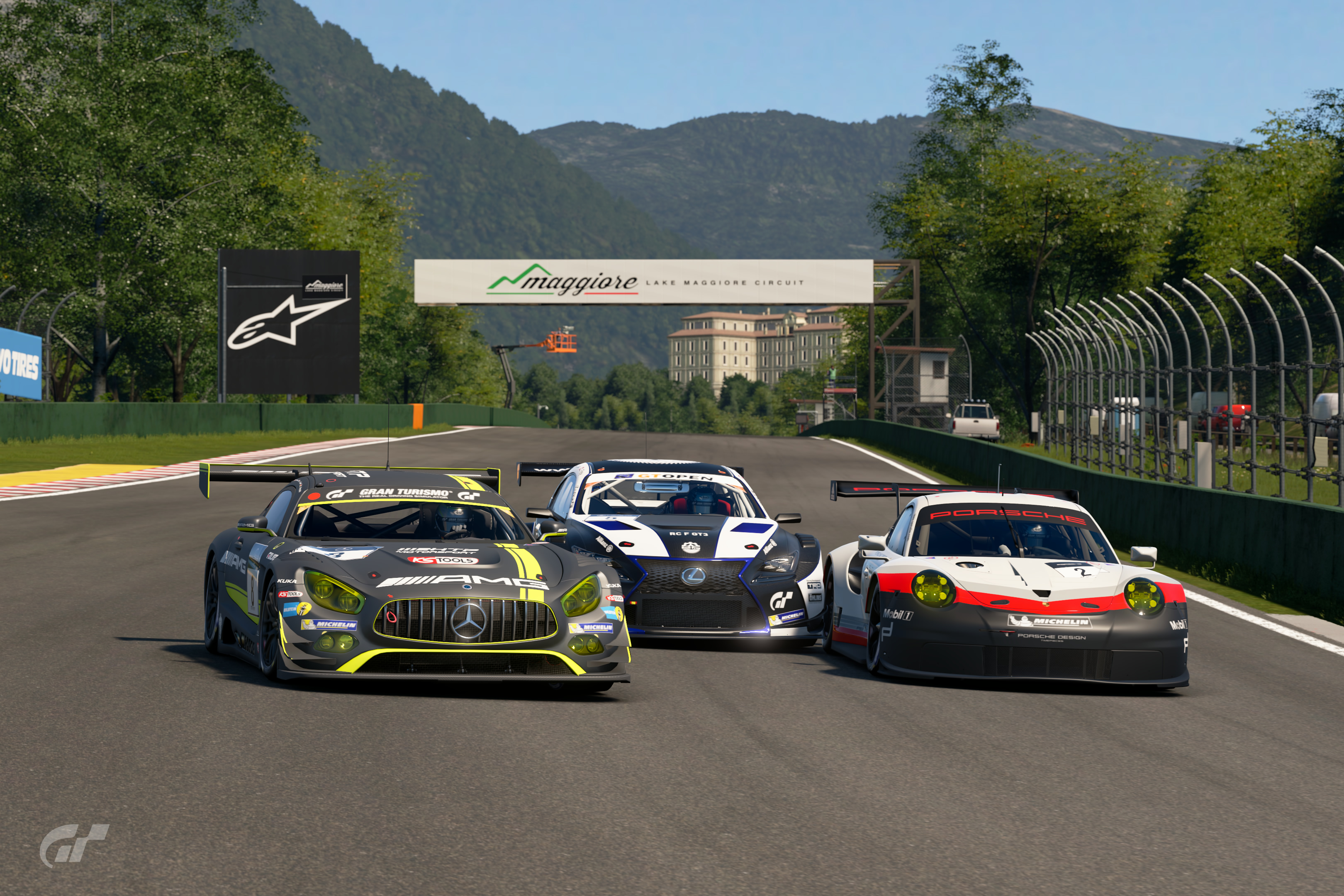 Meanwhile, Yamanaka was cruising with a 13-second lead. Surely, no one could catch the Toyota GR Supra GT, right? Not so fast. BMW, on medium-compound rubber and the Porsche on softs, began chiseling away at Toyota’s lead, and by Lap 17, they had caught the Japanese driver, who was visibly struggling to keep pace on the hard-compound tires. 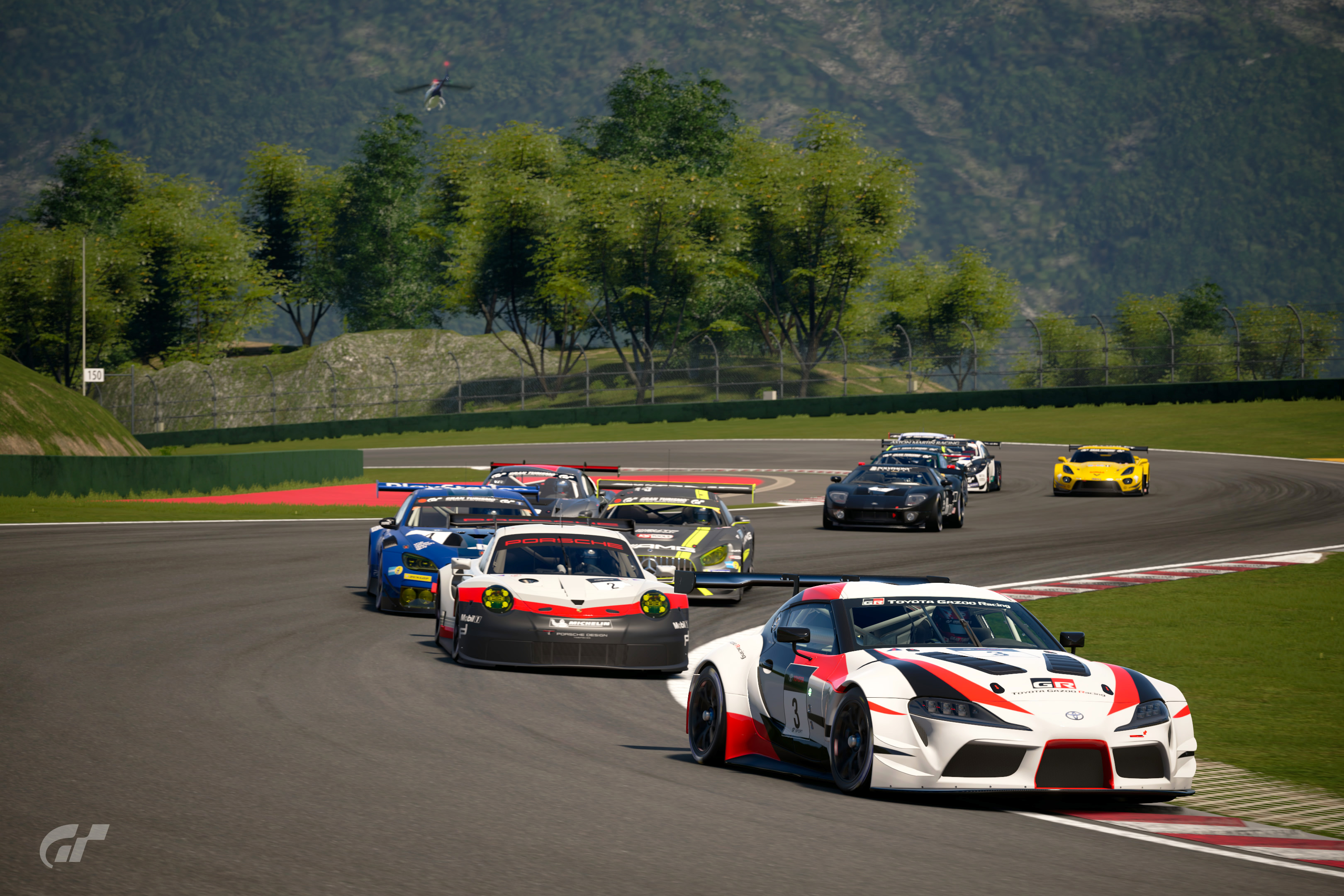 Then, on the penultimate lap, Inostroza made a great pass on Haywood’s BMW around Turn 16, then got by Yamanaka’s Toyota on the final lap, shocking the Japanese crowd who were pulling for Toyota. It was evident that Yamanaka was rattled, as he gave up P2 to Haywood’s BMW soon after. When the dust had settled, the final order was Porsche, BMW, and Toyota. The win, and the double points for the Grand Final, gave Porsche the overall victory with 34 points, while BMW came in 2nd with 27 points and Toyota, a disappointing 3rd with 24. 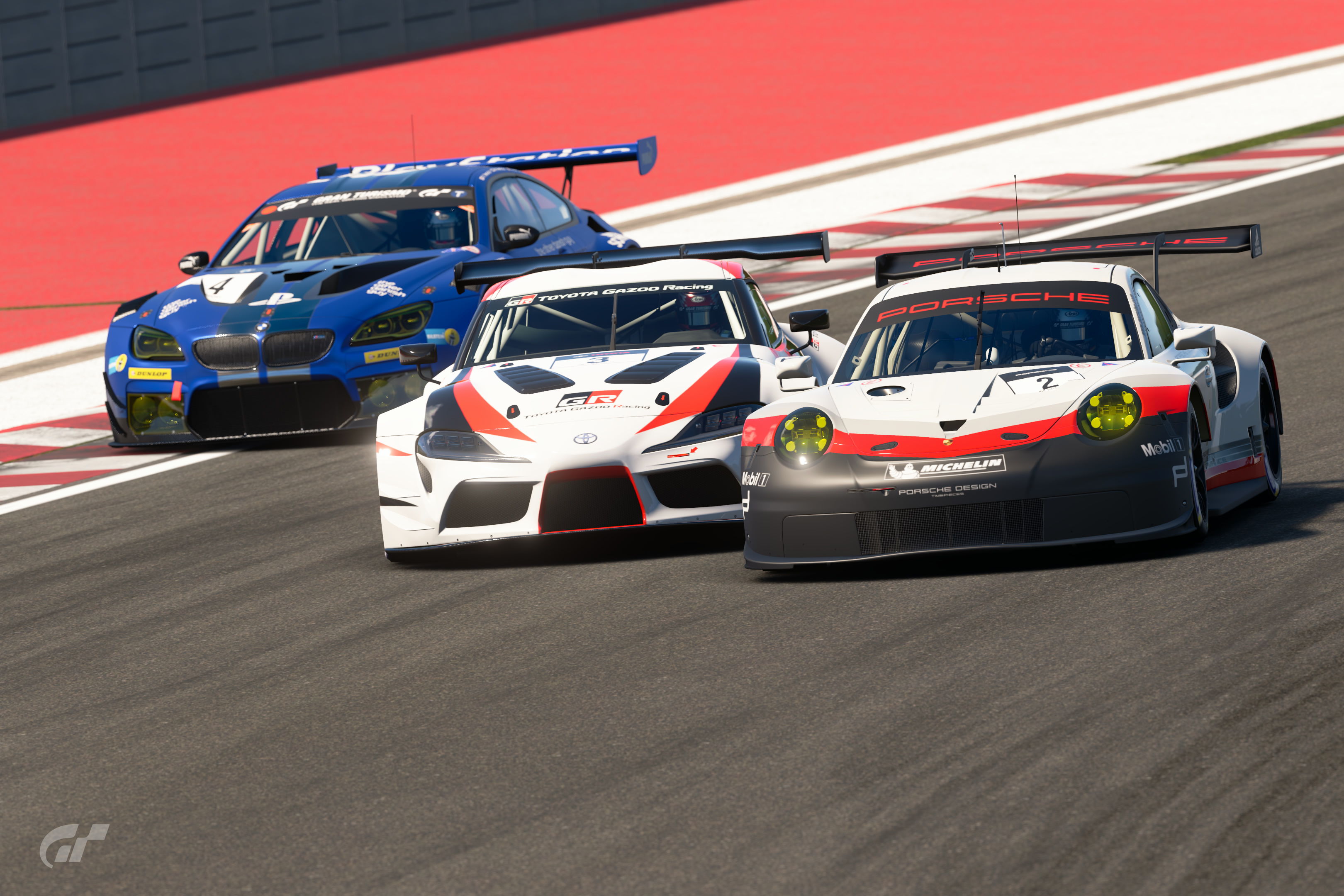