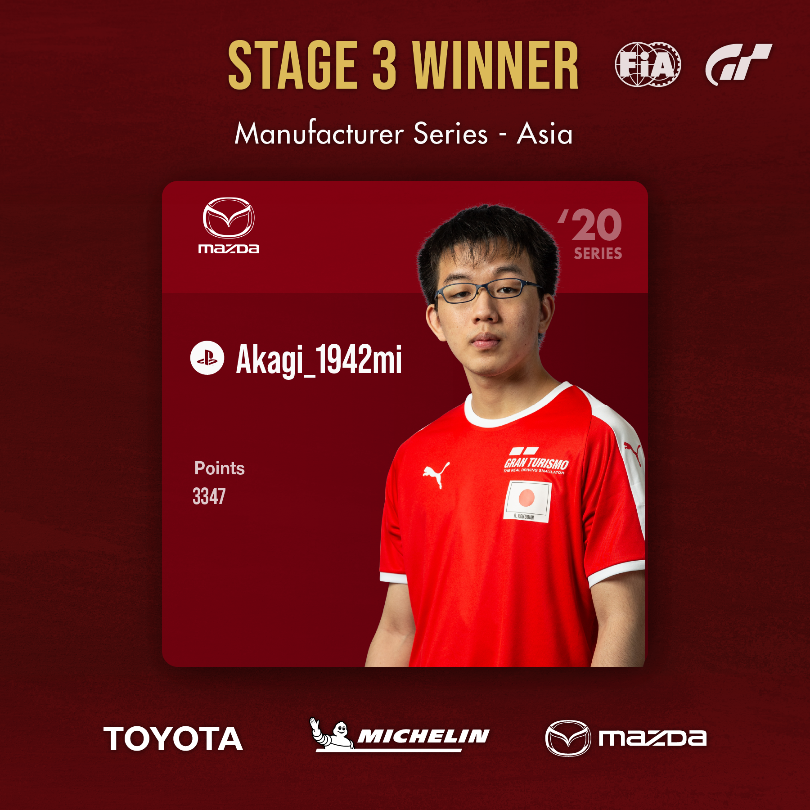 The third stage of the 2020 Manufacturer Series got underway on 7 July.

Mazda's Akagi_1942mi went into the stage at the top of the leaderboard, with a huge lead over his second-placed rival. Citroen's Mizuno (Gori_R4ichi), an up-and-coming challenger who had pushed Akagi_1942mi hard in Stage 1, struggled in Stage 2, and his challenge for the series petered out.

Mizuno's fortunes didn't improve in the third stage either, and was unable to take any points from his head-to-head clash with Akagi_1942mi in Round 28.

The final race of Stage 3 featured Gr. 3 cars, and took place on the Tokyo Expressway.
Pole position was taken by Volkswagen's Nabetani (chonko_213), a driver who hadn't really been involved in competing for podium places thus far. Perhaps they had chosen the biggest stage of all on which to announce their arrival.

Akagi_1942mi started in second place on the grid. He had struggled very badly in the final race of the Nations Cup, which took place immediately prior to the Manufacturer's Series, and was clearly determined to put that experience behind him here. Mizuno, Akagi_1942mi's closest rival in the overall standings, started in third place.

The leading pack broke away almost immediately, with Ford's Kato (Tatsukt) rousing himself to get on the inside of Mizuno on the second turn and move into third place.

On the second lap, Akagi_1942mi made use of Nabetani's slipstream to overtake him and move into the lead. By this point, Mizuno was struggling to keep up with the leading pack, and in fact found himself coming under pressure from behind by Lamborghini's Yoshida (gilles_honda_v12).

Akagi_1942mi had taken the lead quite early on in the race, but try as he might, he wasn't able to shake Nabetani and Kato. The three cars were packed tightly together throughout the early laps.

On the seventh lap, Akagi_1942mi got his line slightly wrong on the approach to the sixth turn, and collided with the wall. Nabetani saw his opening, and glided past Akagi_1942mi to reclaim the lead.

The top three drivers all took a pit stop on the ninth lap, but this would have no effect on their positions.

On the 11th turn of the 11th lap, Kato pulled off an amazing piece of driving, making use of Akagi_1942mi's slipstream to overtake both Akagi_1942mi and Nabetani and move into first place. The manoeuvre had left Nabetani with nowhere to go, and he was forced down into third.

On the second corner of the 12th lap, Akagi_1942mi got on the inside of Kato to reclaim the lead. There was still hardly anything between the top three drivers, however, and their tit-for-tat battles continued for several laps. On the 17th and final lap, Kato showed his mastery of the 11th corner once more, overtaking both Akagi_1942mi and Nabetani to cross the finish line in first place.

Having suffered a number of near-misses over the course of the series, it must have been exceptionally sweet for Kato to see this one through, particularly since he was up against Akagi_1942mi himself.

The 2020 series had seen a number of impressive debutantes, and had seen several other drivers making strong progress, but in the end all the plaudits should go to Akagi_1942mi, who was utterly dominant throughout and ended on top of the pile by a huge margin. It should also be noted that the RX-VISION GT3 CONCEPT managed to emerge victorious in its debut season as well. Congratulations!