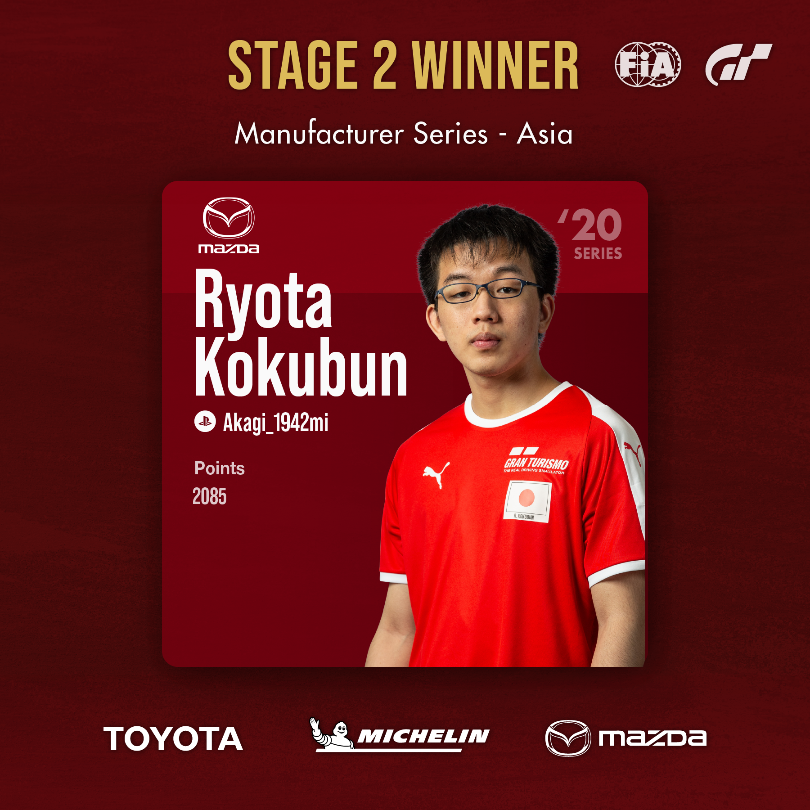 Citroen's Mizuno (Gori_R4ichi) started the stage strongly, clearly seeking to make amends for allowing Mazda's Kokubun (Akagi_1942mi) to overhaul him in order to win the first stage. He scored 364 points in Round 11 and 372 points in Round 12, keeping the pressure on Kokubun at the top of the table.

When the two drivers went face-to-face in Round 16, however, Kokubun was utterly dominant, winning the race and opening up a significant lead over his nearest rival.

The final race of Stage 2 took place on the Nürburgring's 24h layout, and featured Gr. 3 cars.
Dodge's Araki (DW-yuhki02) took pole position. Araki had not troubled the scoreboard much in previous rounds, but here he proved to be a true master of the Nürburgring, perhaps even a worthy rival for the great Igor Fraga himself.
The two challengers for the title of stage winner, Mizuno and Kokubun, started in fourth and fifth place on the grid respectively.

Araki got off to a quick start in his Dodge, leaving the chasing pack behind. He managed to keep the pace up on the Nordschleife as well, and before long he had built up a commanding two second lead over his nearest rival.
This lead would prove particularly important on the Döttinger Höhe straight, as it meant that no one could use Araki's slipstream in order to overtake him.

By the time he had returned to the Grand Prix circuit on the second lap, Araki had further increased his lead. There were now three seconds between him and his nearest challenger.
Building up such a huge lead early on could be considered a reckless strategy from a fuel conservation point of view, but Araki knows exactly what he's doing on the Nürburgring, and appeared to have no doubt that his tactics would pay off.

On the final lap, the leading pack all took a pit stop. Kokubun had been purposefully conserving fuel throughout the race, and this meant that he was able to take a much quicker pit stop than his rivals, jumping from fifth up to second in the process. He would still return to the track over six seconds behind Araki, however.

In fact, Kokubun would soon become embroiled in a tussle for second place, and as a result would prove unable to close the gap at all.

Araki crossed the finish line in first place, having led from start to finish - a flawless performance that displayed true mastery of the Nürburgring. A pole-to-win victory with a lead of 7.860 seconds over second place is seriously impressive stuff.

Mizuno ended the race where he started, in fourth place. Kokubun was able to hold on to second place, and this would prove to be enough for him to secure first place overall, and to win the stage for Mazda.