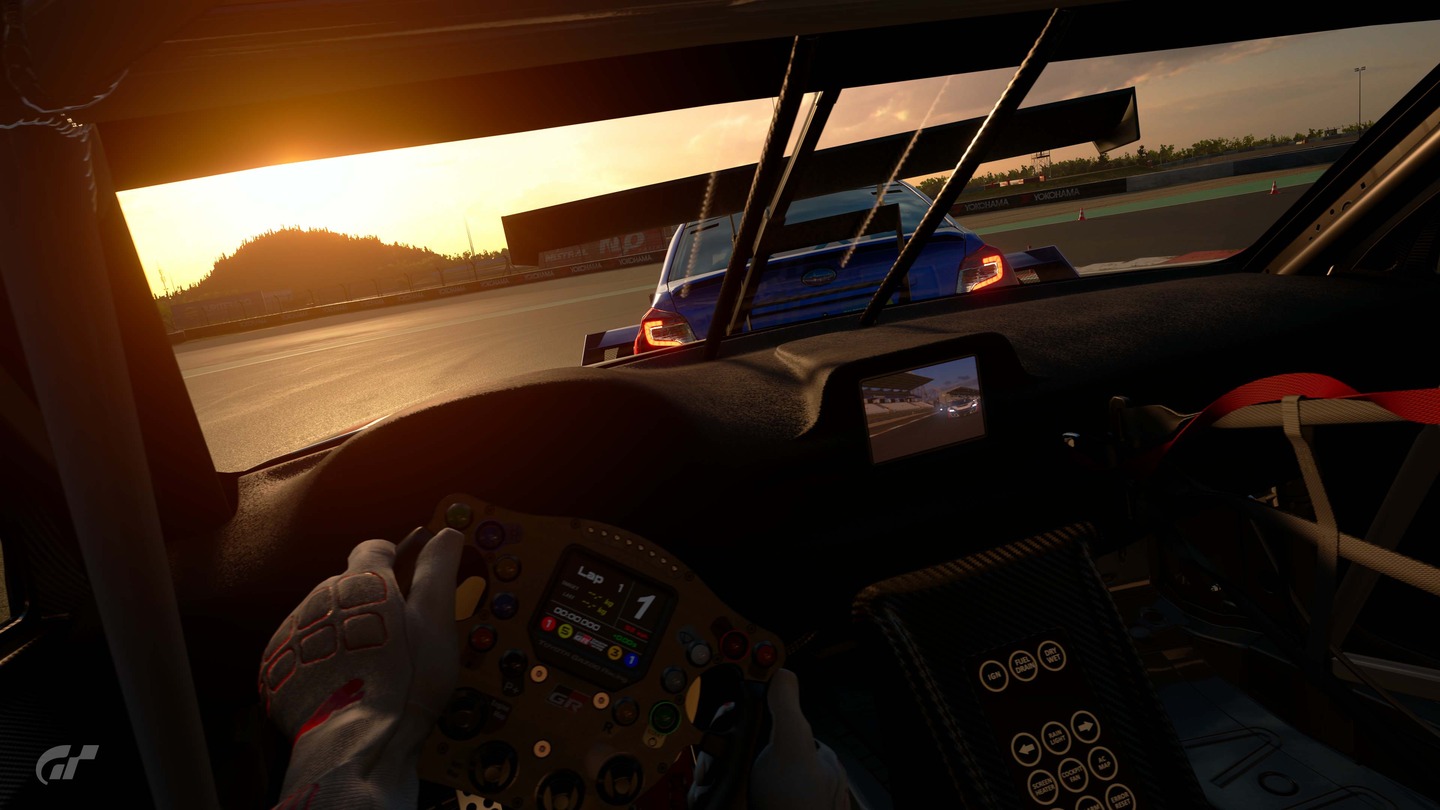 Tokyo, Japan (11 July, 2021) – After one of the most action-packed races ever in Round 1 of the FIA Certified Gran Turismo Championships Manufacturer Series, the stage was set for the second contest of the season with all 12 teams returning to contend at the Nürburgring Grand Prix course. It was Porsche that proved dominant in Round 1 where it ran away from the competition around the legendary Suzuka Circuit in Japan, but every team was still in play, looking to score some important championship points before heading to the World Series Showdown in August.

As with the first race of the season, the drivers strapped themselves into Gr.3 racecars for Round 2, a 15-lap campaign of attrition around the Nürburgring’s GP course. As was the custom, each team was required to drive at least one lap on both medium- and soft-compound race tires. During qualifying, it was last year’s champion Team Subaru that was fastest with Japan’s Takuma Miyazono (Kerokkuma_ej20) behind the wheel, grabbing pole position for the race. In the No. 2 spot was the Toyota GR Supra Racing Concept piloted by Adriano Carrazza of Brazil (KoA_Didico15) followed by the Honda NSX driven by Italy’s Valerio Gallo (Williams_BRacer) and the Mazda RX-Vision GT3 of Japan’s Ryota Kokubun (Akagi_1942mi). And in what seems to be a growing trend, those at the front of the grid started on the faster soft-compound Michelins, while the rest of the field opted for the mediums. 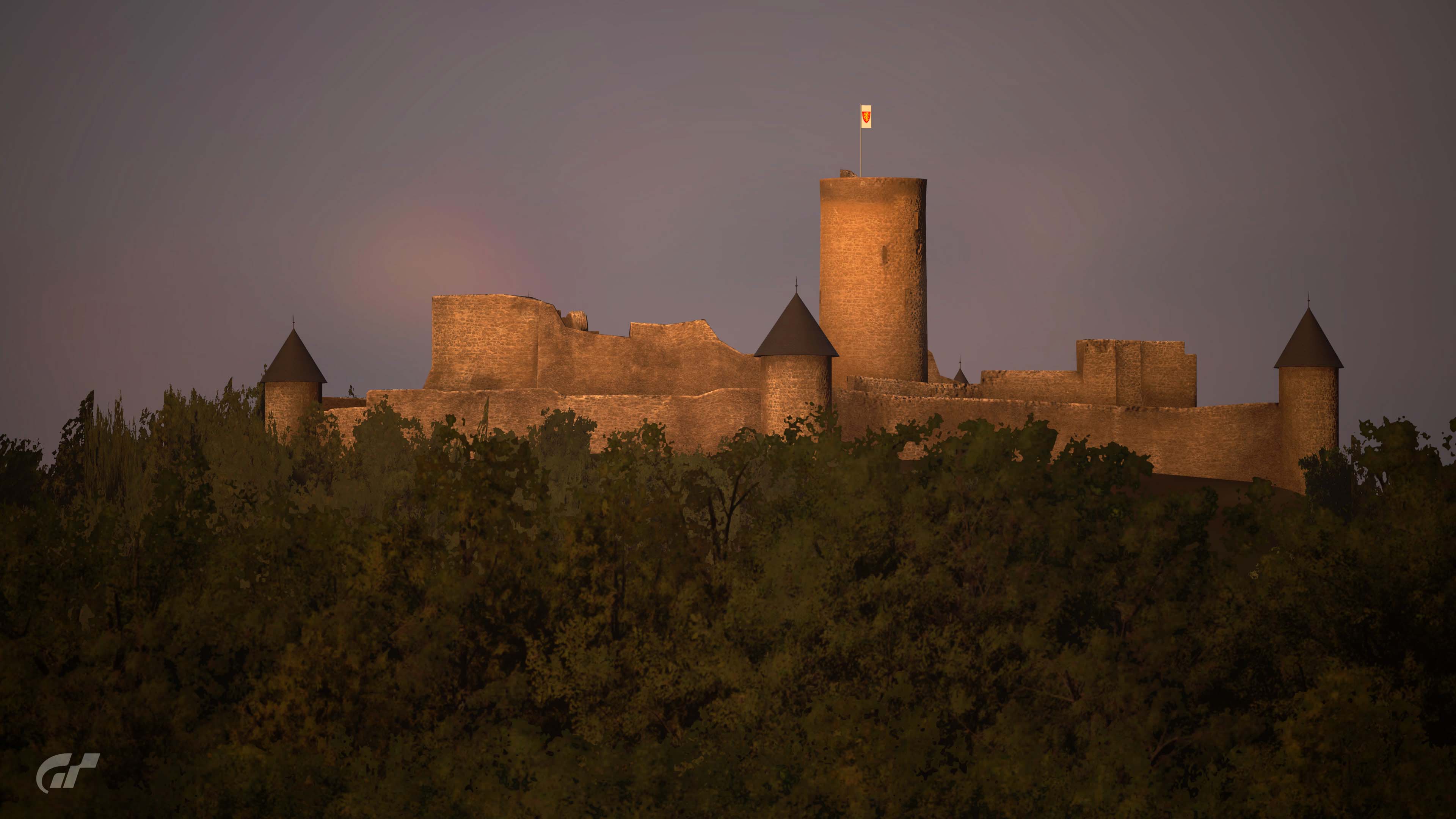 The action began immediately when Carrazza bumped his Toyota Supra into the rear of the Subaru WRX going into the Turn 1 hairpin. Miyazono kept his car under control, but the Brazilian was assessed a 1.0-second penalty for the aggressive move, which dropped him down to 6th place. Meanwhile, the Mercedes-Benz AMG GT3 driven by Lucas Bonelli (TGT_BONELLI) got past Kokubun’s Mazda RX-Vision GT to take possession of 3rd. By midway through Lap 4, it was apparent that Miyazono was focused and completely dialed in because had opened up a 3.2-second lead over the 2nd-place Honda NSX of Gallo. Also on this lap, the series points leader Porsche made a surprisingly early pitstop, with driver Angel Inostroza of Chile (YASHEAT_Loyrot) choosing to go to the soft-compound tires early, hoping to take them all the way to the end of the race. 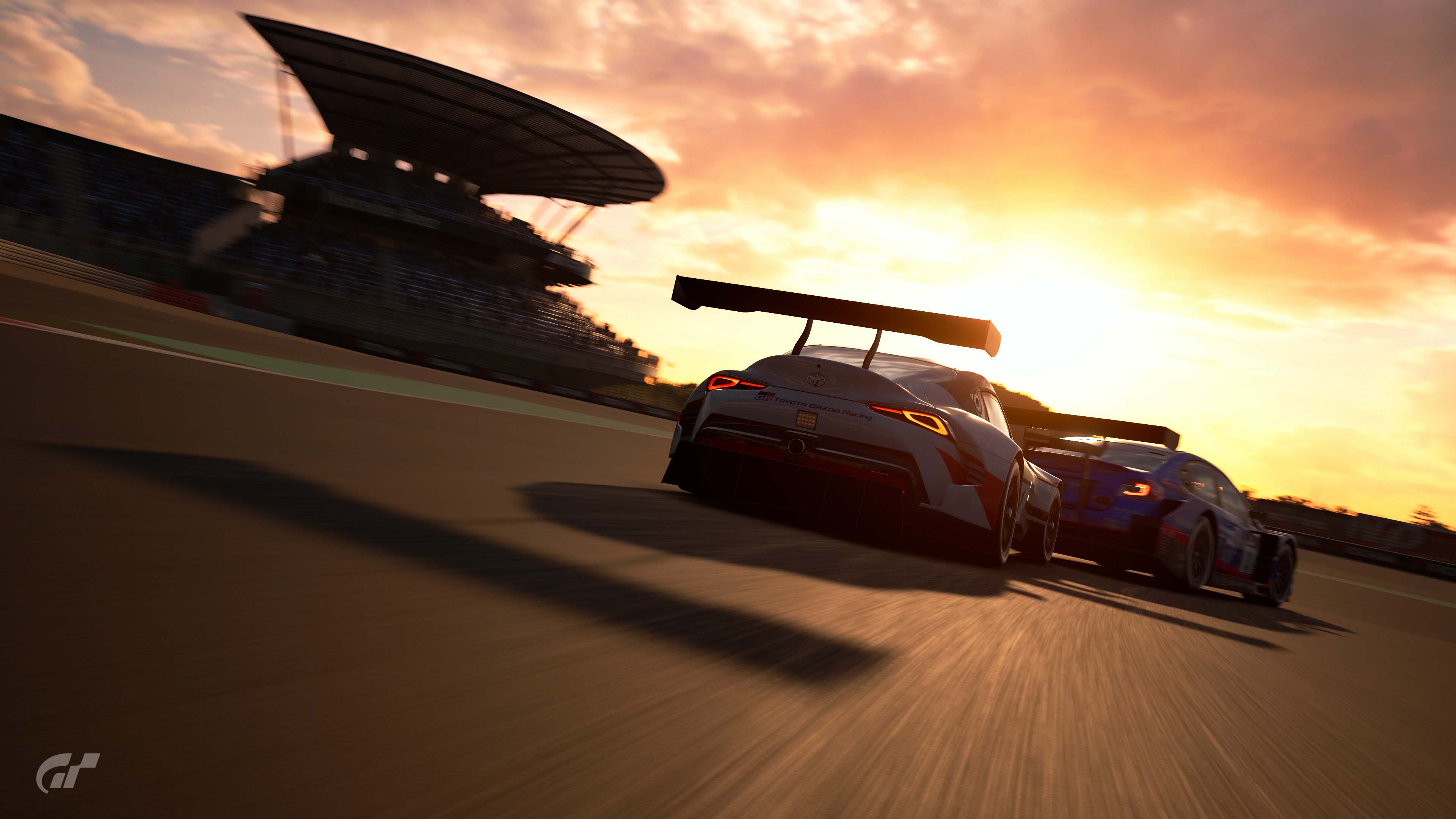 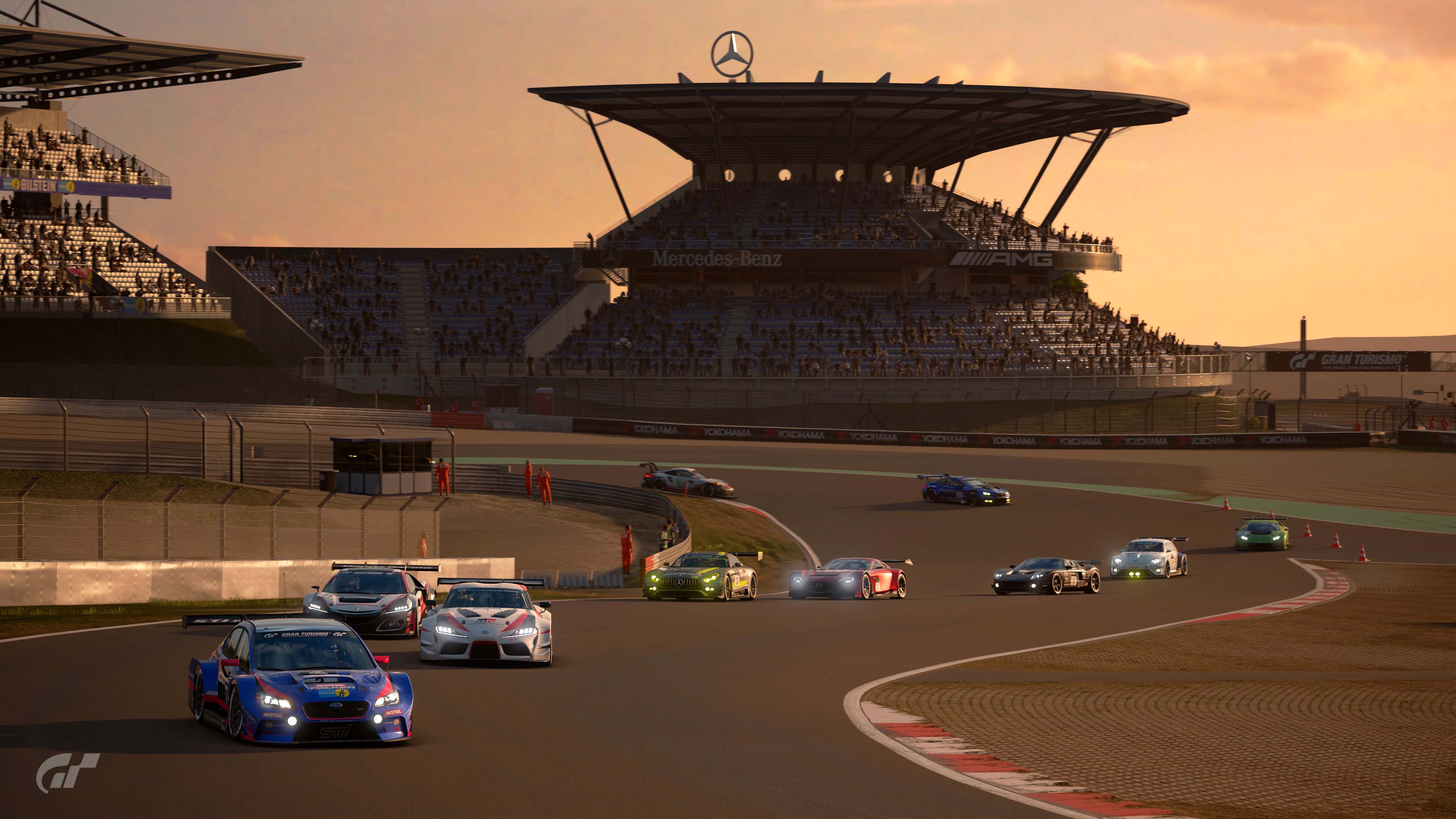 The next few laps saw several cars pit, but by this time, the Subaru WRX was nearly nine seconds in front of the Toyota Supra that was now in 2nd, dominating the competition through the first half of the race. And when Miyazono finally did pit, he had enough of a buffer to return to the track in P1. Battles were being waged up and down the field with penalties handed out left and right, but the most intense action was unfolding in the middle of the pack, as a scrappy Carrazza, who had fallen to 4th, was trying to hold off a trio of cars: the hard-charging Porsche of Inostroza, Kokubun’s Mazda and the Volkswagen Beetle Gr.3 driven by the U.S.’s Donovan Parker (Arnage_Cooper). Ultimately, it was Parker’s Beetle that took over P4. 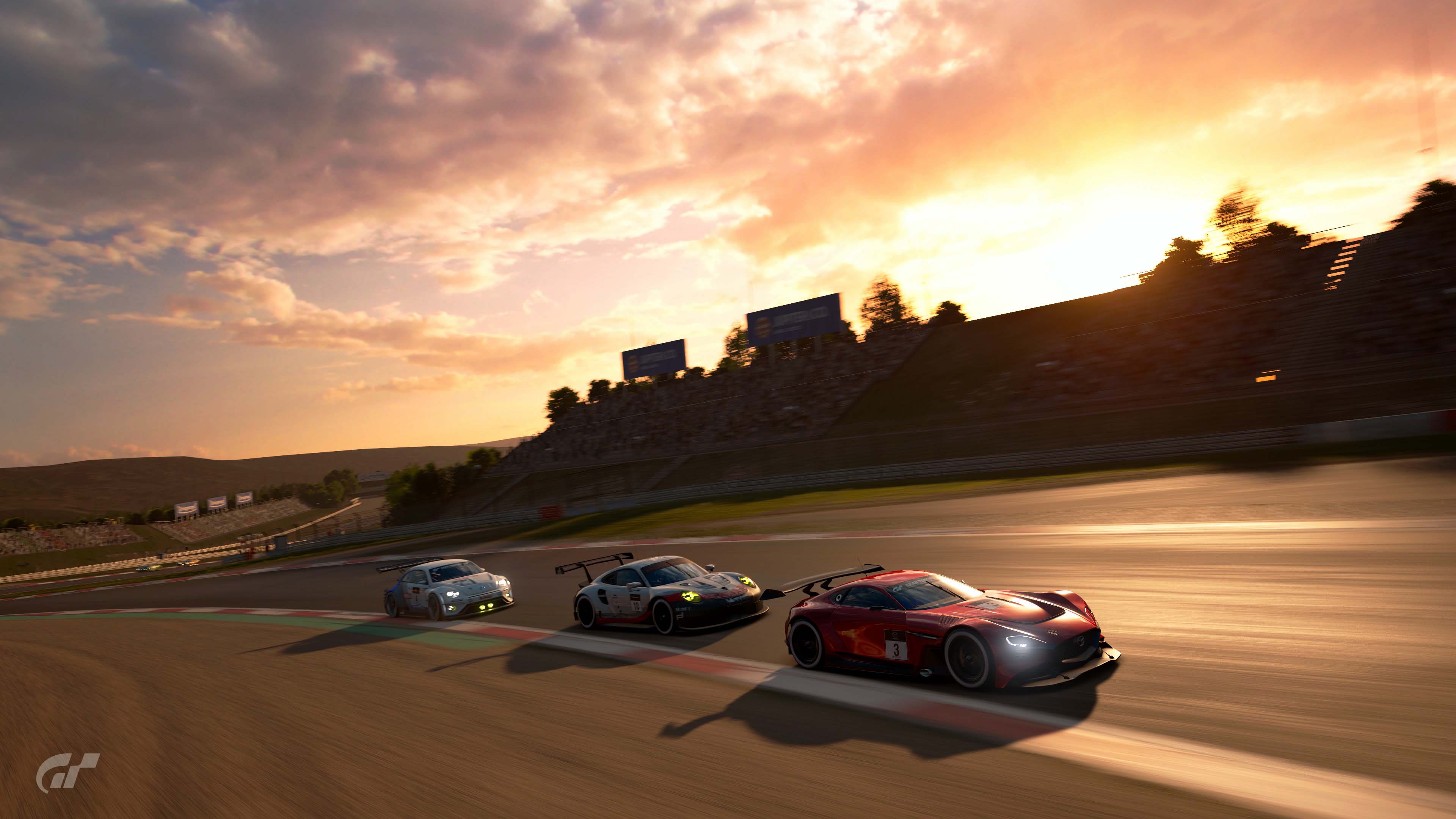 After more reshuffling, on Lap 11, the Mercedes-Benz AMG GT3 of Bonelli flew past the Volkswagen to take over P3 with his sights now set on the Porsche 911 RSR. It would be a waiting game of sorts for the Brazilian, as Inostroza’s early pitstop strategy appeared destined to backfire, his pace slowing with every passing lap as the tread on his tires wore out. Meanwhile, despite being on medium-compound tires, Miyazono was still cruising, building up a 3.0-second advantage on Gallo’s NSX, who was himself nearly 6.0 seconds clear of the 3rd-place Porsche. 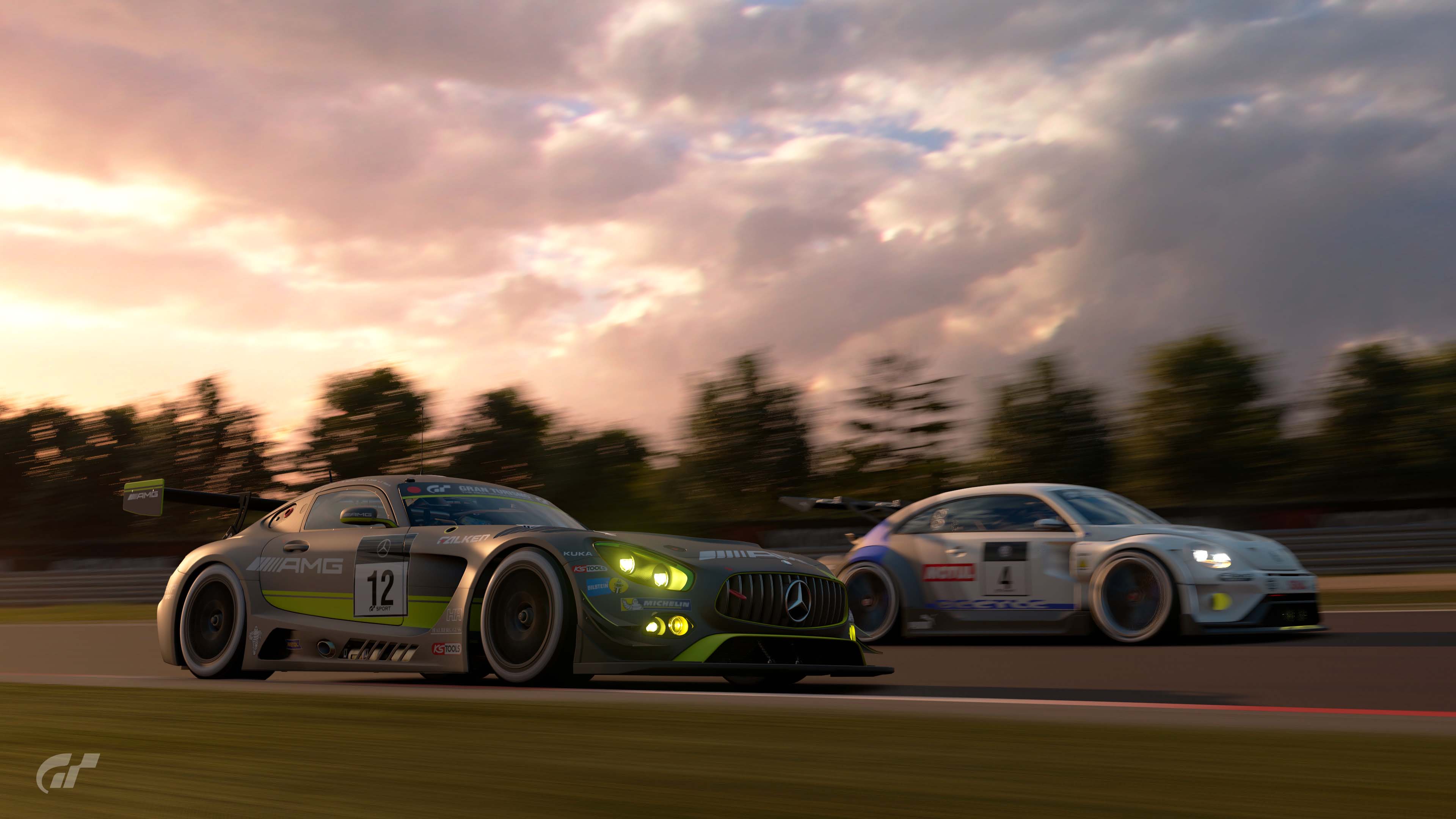 As predicted, the Mercedes-Benz got around the Porsche on Lap 14 through Dunlop Corner (Turn 5) to take possession of 3rd place, and by maintaining that position, Bonelli scored an all-important World Series point for Mercedes-Benz. But ultimately, the day belonged to Miyazono and the Subaru WRX, winning handily over the Honda NSX of Gallo and showing a return to form for last year’s triple champion. 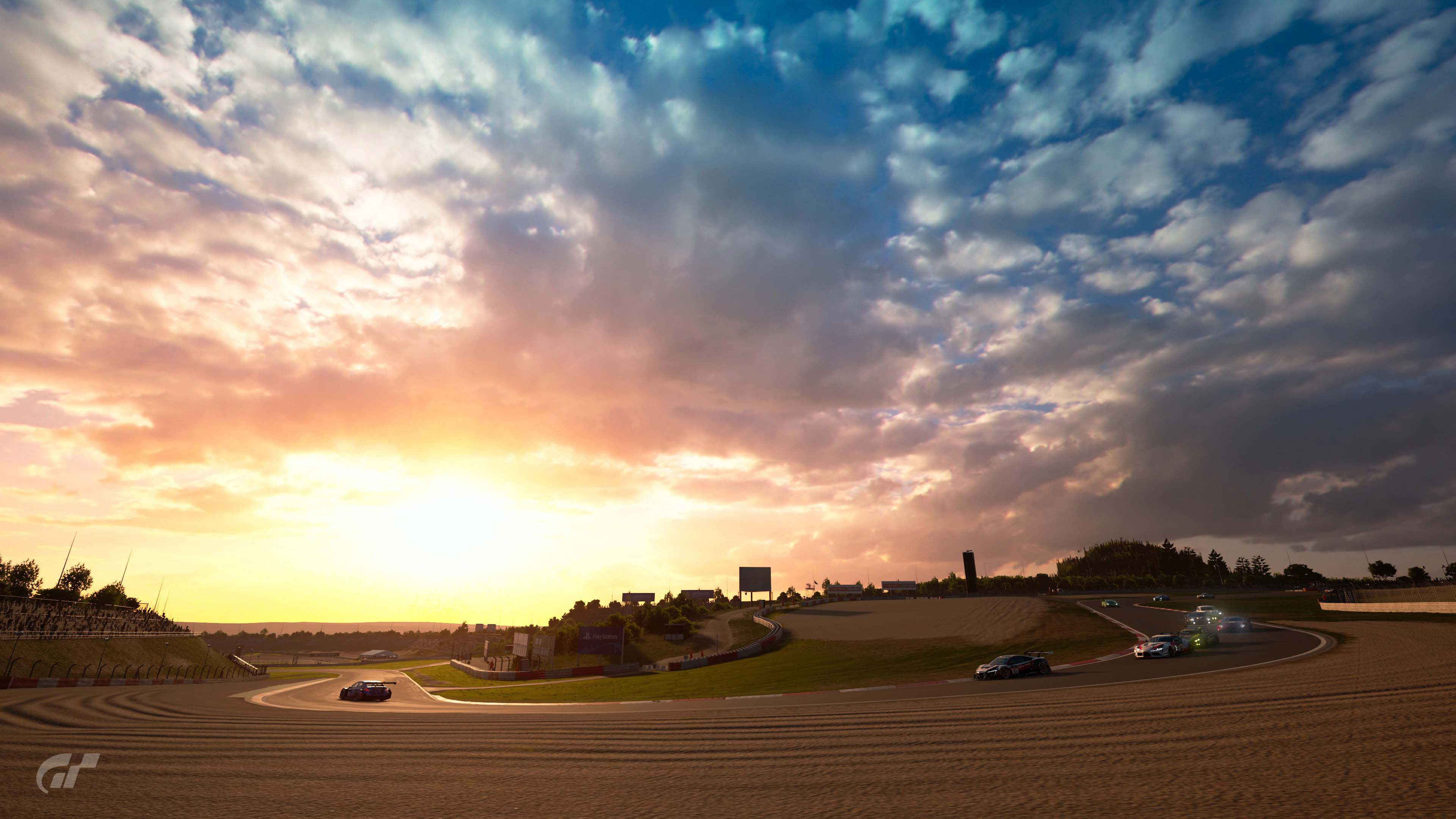 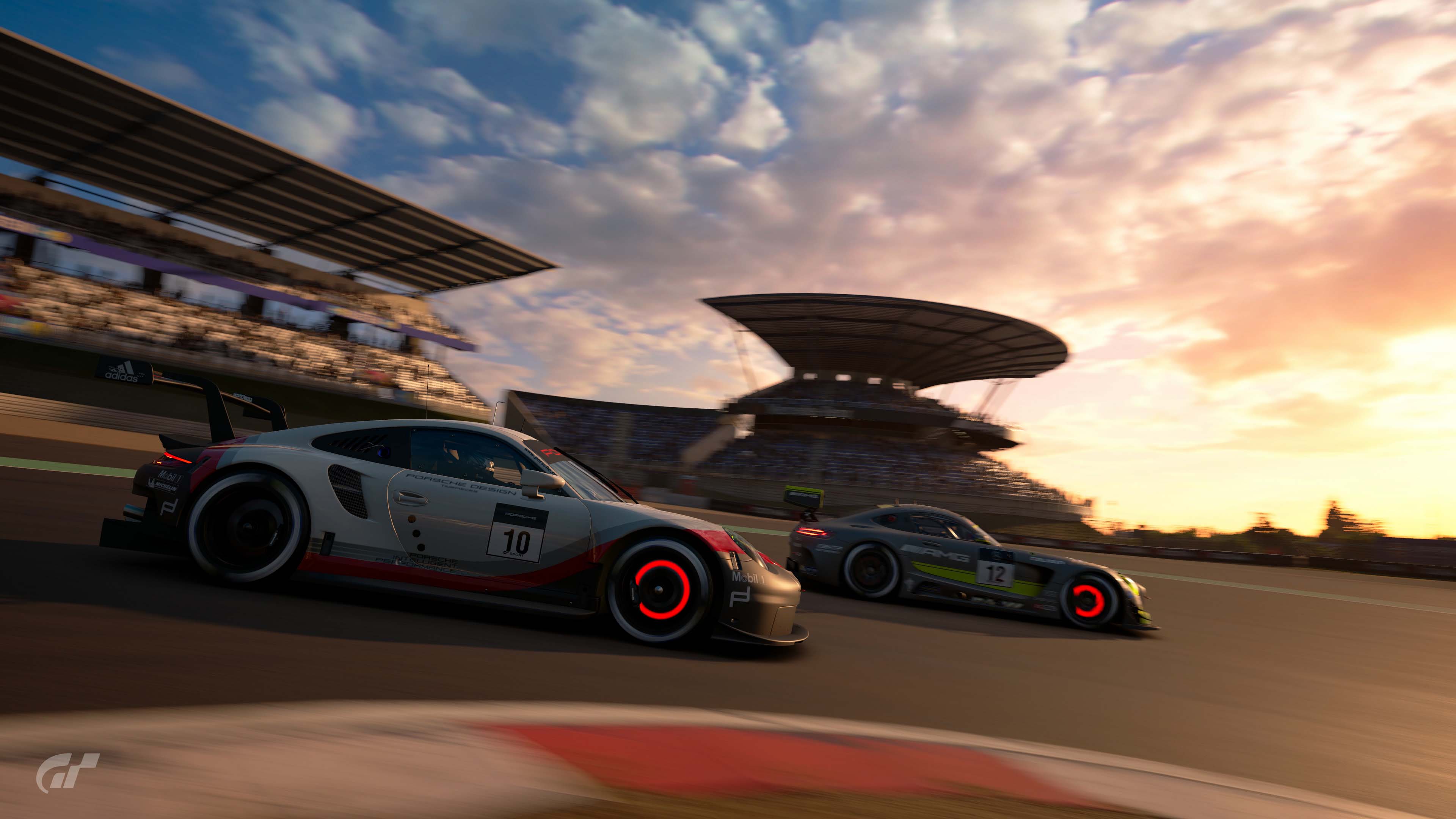 With the win, Subaru took the lead in the World Series point battle with four, leading Porsche with three and Honda and Mazda with two points each. 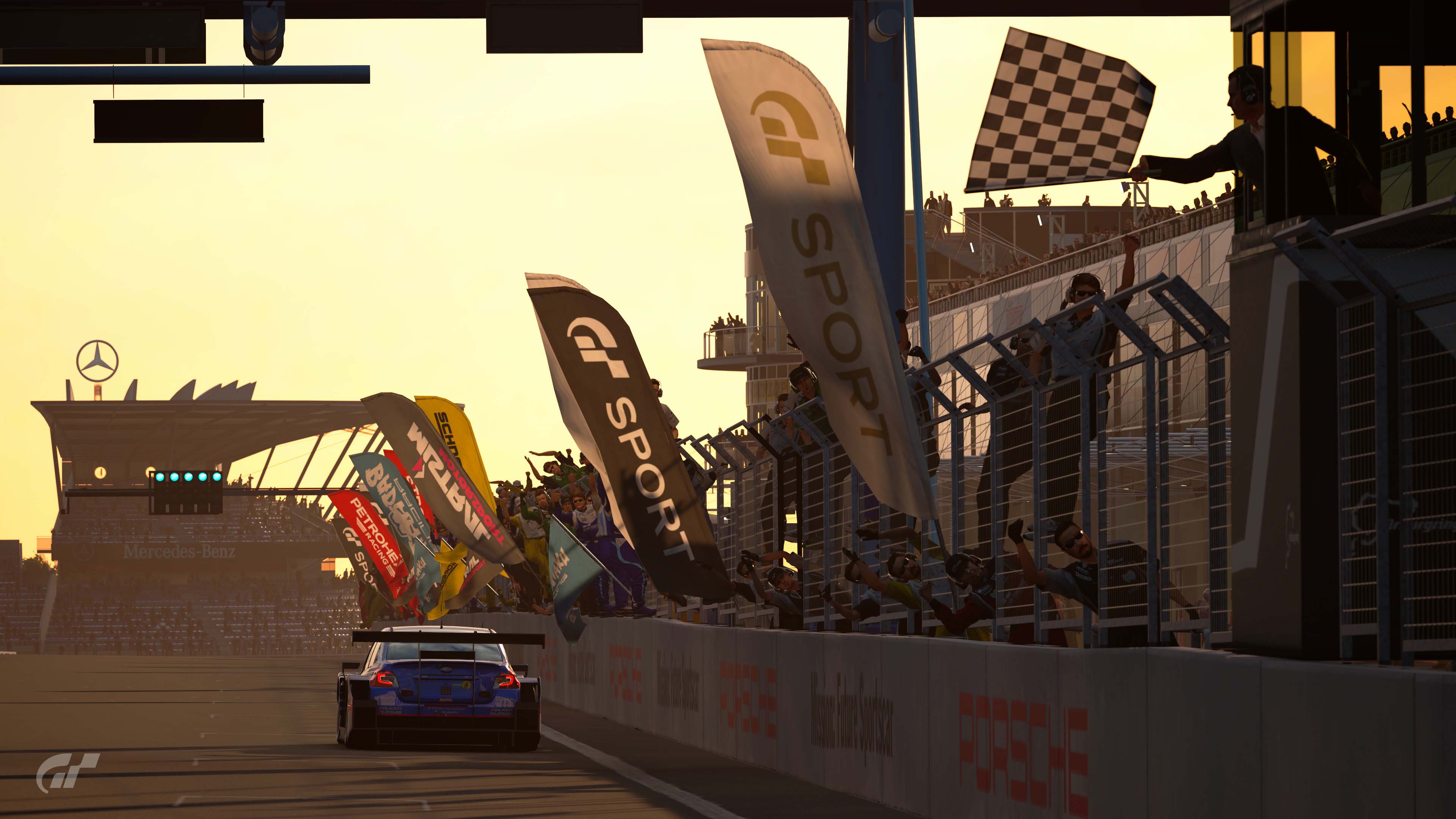 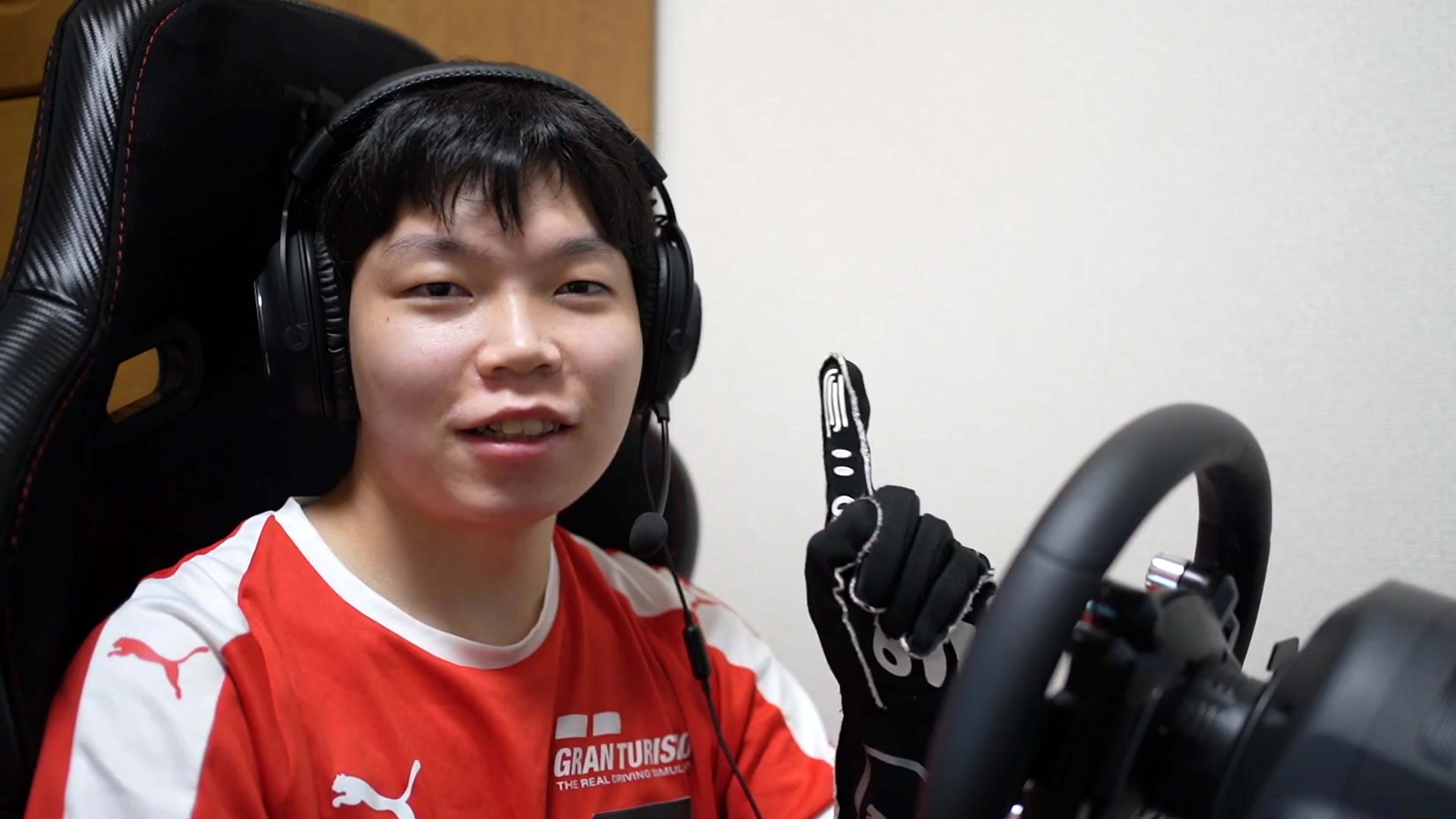 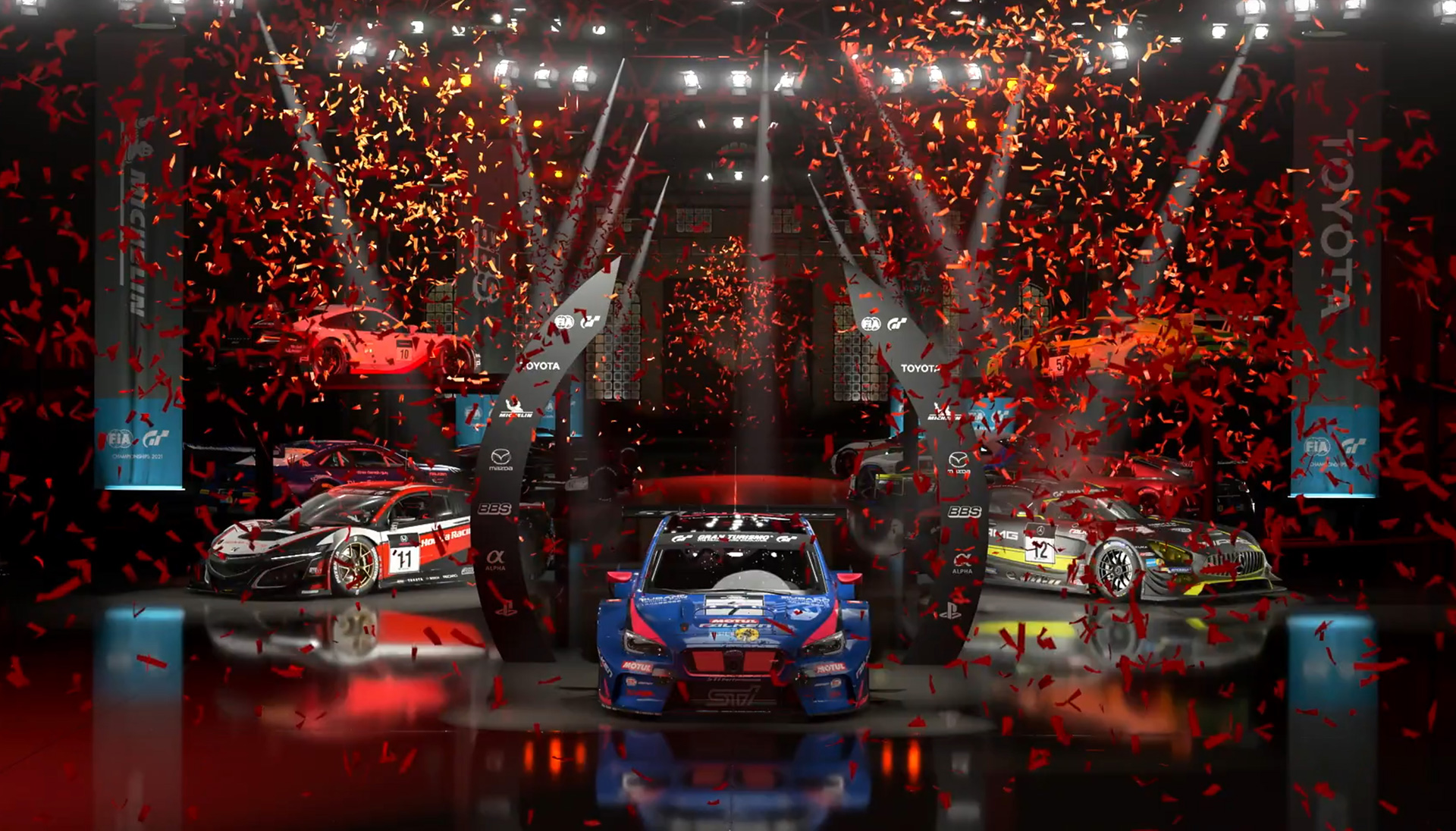