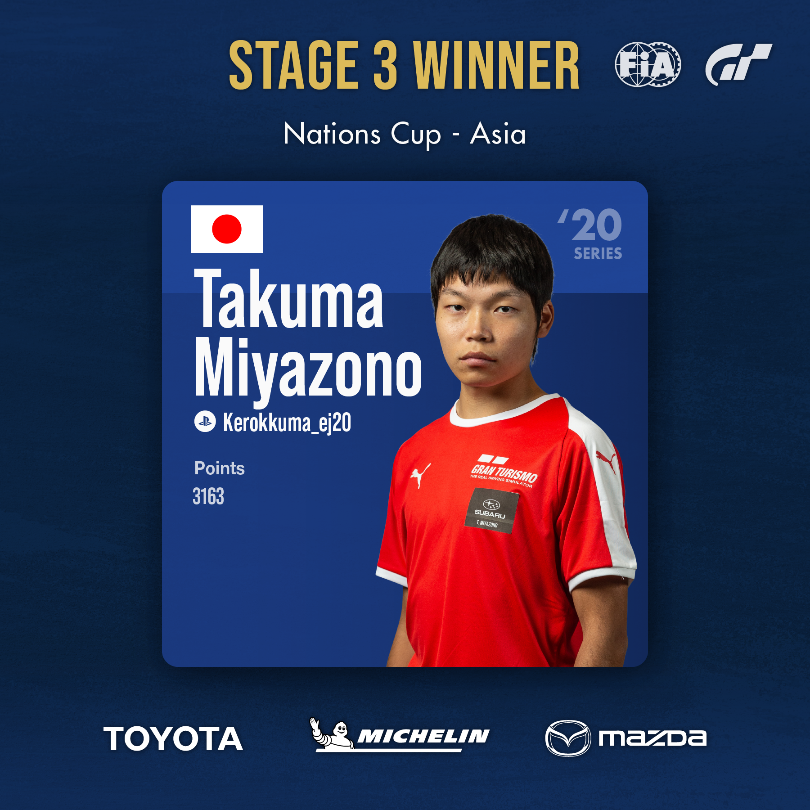 The third stage of the 2020 Nations Cup got underway on 7 July.
Japan's Akagi_1942mi had allowed his compatriot Miyazono (Kerokkuma_ej20) to overtake him at the top of the leaderboard during Stage 2, and took to the track in Rounds 21 and 24 in an attempt to get his own back. Things didn't go particularly well for him, however, and he was unable to score over 400 points in either round.

Overall leader Miyazono mostly kept his powder dry during the stage, entering only a few races. One of the races he did enter, however, was Round 27, and an unprecedented tussle broke out on the oval of Special Stage Route X.
These are always dramatic races, where all entrants stand a chance of winning, and Miyazono deserves credit for being brave enough to take part. He didn't manage to score any points, but he did score an impressive victory in his matched race.

In Round 28, Miyazono went head-to-head with Akagi_1942mi. Miyazono performed poorly in qualifying, and had to start in seventh place, while his rival never looked back after grabbing pole position, crossing the finish line in first place. It was a result that left things nicely poised as the drivers went into Round 30, the final round of the Online Series.

The final race of Stage 3 took place on the Sardegna Road Track. All drivers drove X2019 Competition cars.
Miyazono took pole position, with his rival for the series title, Akagi_1942mi, back in third.

Miyazono got off to an impressive start, but Akagi_1942mi was less fortunate. Nakao, who had started in second place, crossed in front of his compatriot on the very first corner, forcing him into the guard rail—a development that saw Akagi_1942mi drop straight down to tenth place. Things then became even worse for him: on the second corner he was given a one-second pushing penalty after getting caught up in a cluster of cars, and on the third corner he left the track and slid into a wall. In just one nightmarish lap, Akagi_1942mi had fallen all the way down to 12th place.

Akagi_1942mi's misfortunes meant that the leader Miyazono was having an easy ride of it, and as a result had soon built up a one-second lead over the chasing pack.

By the sixth lap, Akagi_1942mi had managed to climb up to fifth place, but was struggling to make any further progress due to the nature of the Sardegna Road Track, which has few spots for overtaking. What's more, his efforts in dragging himself back from 12th place had taken its toll, and his rear tyres were already showing sings of wear.

On the eighth lap, Miyazono switched from soft tyres to medium tyres. Akagi_1942mi waited until the ninth lap to make the same change. Despite their contrasting fortunes at the start of the race, it seemed the two drivers were following the same strategy.

On the 14th lap, Miyazono switched back to soft tyres, leaving his hard tyres until later in the race. Akagi_1942mi changed to hard tyres on the 14th, but then immediately took another pit stop on the 15th to switch back to soft tyres for the remainder of the race, by this point clearly realising that a different strategy was required.

By the 17th lap, it was impossible to know who was in control of the race due to drivers' different pit strategies, but it was hard to argue with the 10-second lead that Miyazono had built up.

On the 22nd lap, Miyazono took a pit stop and switched to hard tyres for the last two laps. By this point his lead was insurmountable and he was able to cruise to the finish line in first place.

Akagi_1942mi had managed to climb up to fifth place by the final lap, but he had no hope of catching Miyazono, whose pole-to-win victory never seemed to be in doubt.

After finishing the first stage in second place, Miyazono staged a hugely impressive comeback in Stages 2 and 3 to deservedly end the 2020 series on top of the points rankings.