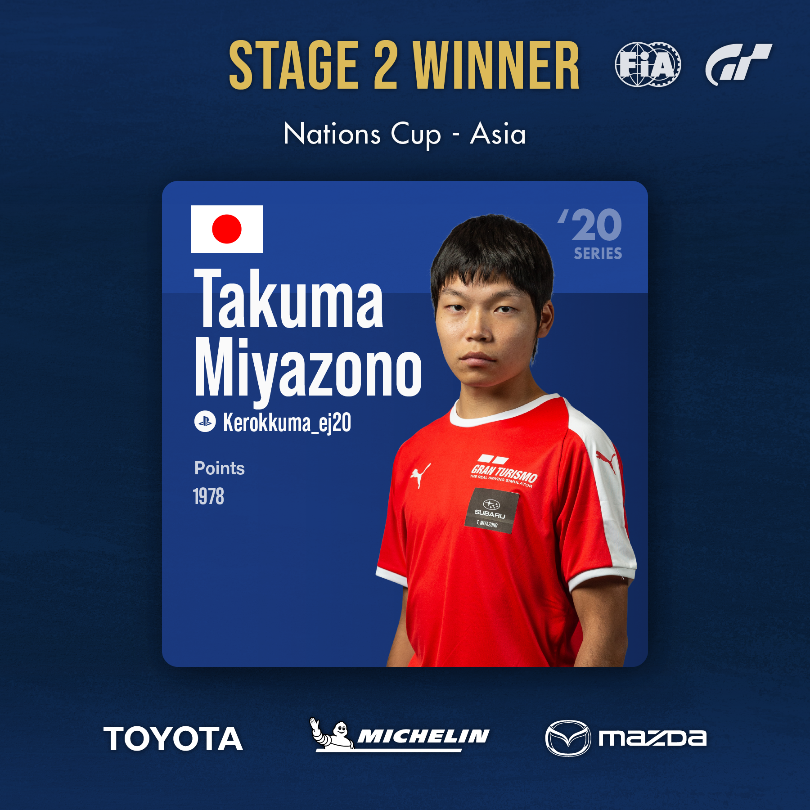 The stage was delicately poised from the start, with only 30 points separating the first-placed Kokubun (Akagi_1942mi) from the second-placed Miyazono (Kerokkuma_ej20) at the end of Stage 1.

Many drivers decided to sit out most rounds, opting instead to save themselves for the two Top 16 Superstars races, in Rounds 16 and 20, where the big points can be scored. Indeed, Round 16 turned out to be a head-to-head tussle between Kokubun and Miyazono, with the latter overhauling the former to move to the top of the leaderboard.

The final race of Stage 2 was a one-make race, with all drivers in a F1500T-A. It took place on the Circuit de Sainte-Croix-C.
Despite being in a position to challenge for the top spot overall, Japan's Kokubun did not enter the race. This was good news for his closest rival Miyazono, of course, who promptly capitalised by taking pole position. Miyazono opted to start on soft tyres, clearly hoping to put some daylight between himself and the chasing pack in the early stages of the race.

Japan's Sugawara (blackbeauty-79), who started second on the grid, also opted to start the race on soft tyres. His compatriot Yamanaka (yamado_racing38), who started in third, opted for a different approach. By starting the race on medium tyres he was clearly hoping to keep his soft tyres in order to make a push for the front later in the race.

Making the most of their soft tyres, Miyazono and Sugawara soon started to build up a significant lead over the rest of the field.

The top two both took a pit stop on the third lap, both opting for soft tyres once again. Given that the race rules stipulated that all drivers had to use soft, medium and hard tyres during the race, this decision indicated that both Miyazono and Sugawara had opted for a three-stop strategy.

Miyazono returned to the track still in first place, with Sugawara emerging behind Yamanaka, having fallen down to third. The superior grip of his fresh soft tyres would mean that he was soon able to catch his compatriot and reclaim second place, however.

By this point, the race leader Miyazono had established a commanding four second lead over his closest rival.

On the seventh lap, both Miyazono and Sugawara took their second pit stop, switching to medium tyres. The gap between the two had increased to seven seconds, with Miyazono now looking very secure in first place.

The top two took their third and final pit stop on the last lap, switching to hard tyres in order to complete their mandatory tyre changes.
These final changes would have no effect on the outcome of the race, with Miyazono crossing the line in first place. His rivals simply couldn't keep up with his pace, and his performance was dominant from start to finish.
Miyazono's fantastic performance in the final race would help ensure that he would also be crowned the winner of the stage overall.