In-depth details of four exciting new vehicles from among the over 1,000 cars appearing in Gran Turismo 5. 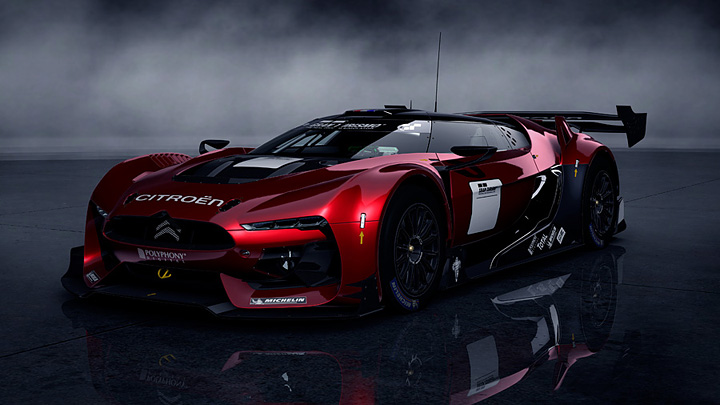 The GT by Citroën made its debut for both the real world, and virtual world of Gran Turismo 5 Prologue, at the 2008 Paris Motor Show. Introducing the next evolution of this cutting-edge concept car, now a full-fledged motorsports machine, the "GT by Citroën Racecar".

Designer Takumi Yamamoto returned to update his original sleek design and turn it into the pure racing machine seen here. Design sketches went back and forth between Yamamoto and Polyphony Digital over the course of this re-design. The original fenders were widened, and with the addition of air ducts and other aerodynamic parts, the design took an extremely aggressive turn.

Based on this, the details of transforming it into a more racing car-like machine were left to Polyphony Digital. Fine details like the hood pins and tow hooks you would normally see on race cars, the placement of valves for the air jacks, etc. were all determined by Polyphony Digital, putting the finishing touches on the eye-catching exterior.

The other major piece of work left to Polyphony Digital was the design of the interior. The motif was a modern jet fighter, and while being extremely high tech, it is balanced with the gritty, raw feel of a real racing car. All parts aside from the dashboard were replaced, and the steering wheel and HUD (heads-up display) are functional in design as befitting a racing car, while still being as eccentric in aesthetics as the car's exterior itself. Though not changed in design, the dashboard is now made of carbon, instead of copper, for added weight reduction. This vastly-mutated version of the "GT by Citroën" gives off a very aggressive, competitive air, perfect for the many racing circuits waiting in Gran Turismo 5. 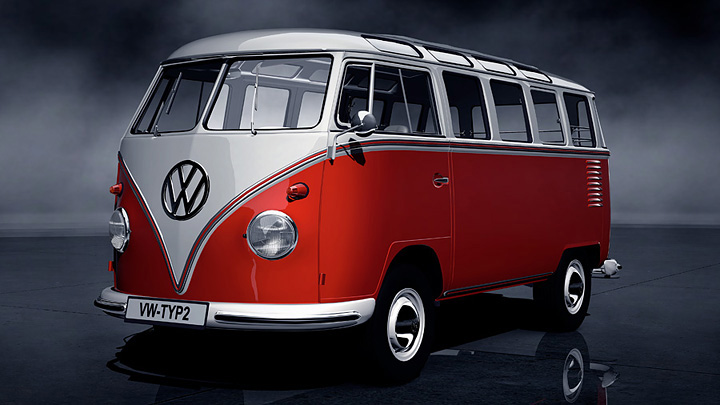 The Volkswagen "Beetle" created by Dr. Ferdinand Porsche gave birth to a large number of variants, and one of the cars which formed the foundation of VW after the war alongside the Beetle was the multipurpose Transporter van. A bread loaf-like van body was mounted on the Beetle chassis, and it took full advantage of the compact RR (Rear engine, Rear drive) layout which packs all the drive train mechanism at the rear axle, meaning most of its interior space could be used for passengers and cargo.

The Transporter design evolved into the Samba Bus, a microbus for carrying lots of passengers. The well-lit interior made possible by the additional windows featured 3 rows of seats, all within a small space of just around 4 meters in length, just enough room for nine passengers. The engine was the same 1.2 liter horizontally-opposed 4-cylinder engine, but this was later enlarged to a 1.5 liter.

Praised for its superior utility, it was a massive hit in Europe and the US. In the 70's its cute looks caught the eye of the younger generation, and the car became one of the virtual symbols of the hippie movement. Its spirit still lives on today, and VW themselves have announced concept models of tall buses in the image of the Samba Bus. 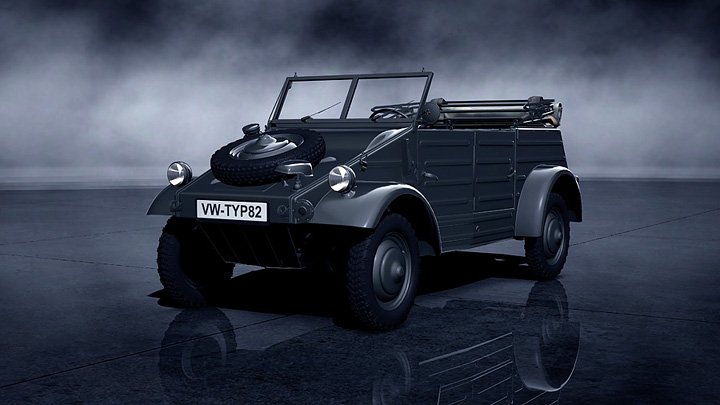 The traditional rear engine, rear drive Volkswagen vehicle was simplistic in design, light weight and boasted good traction. The body structure was easy to manufacture, making it possible to mass produce at low cost. And one vehicle that utilized all of these advantages in a small military vehicle package with superior off road capabilities was the Kubelwagen.

Within the approximately 4-meter length of the car was space for 3 passengers. Its weight was less than 550kg, designed in consideration for transportation aboard larger transporters and boats.

After starting development of this car in January of 1939, Dr. Porsche worked at incredible speed and completed a prototype within the year. It is said that this speed in development came about because Dr. Porsche had already foreseen the innate potential of the Volkswagen as an off-road vehicle.

The Kubelwagen that was sent onto the battlefield displayed first-class off-road capabilities, and proved very useful in mountainous regions as well as marshes. The air-cooled engine had no problems such as coolant leaks common to other cars, and its high reliability earned it even higher levels of regard.

Until the appearance of the Kubelwagen, soldiers were forced to march long distances with heavy equipment in rough terrain. So the appearance of this vehicle, able to travel roadless paths, brought about a revolution that totally changed wartime strategy. 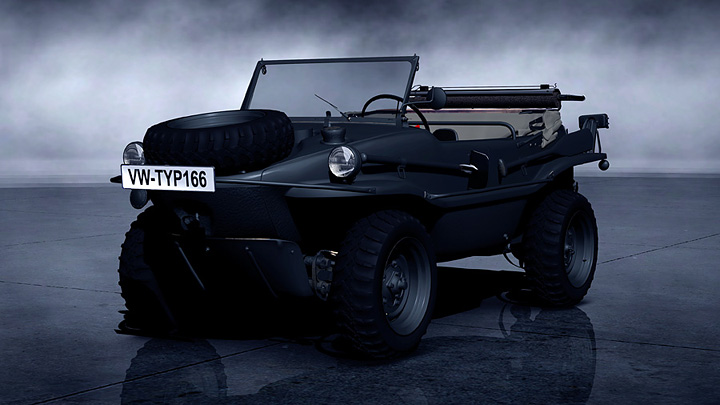 In 1940 as the high performance of the Kubelwagen became apparent, Dr. Porsche was tasked with developing an amphibious vehicle based on the Kubelwagen. The result was the Schwimmwagen.

Again in this car, the power train of the Volkswagen proved its versatility. Dr. Porsche designed a four wheel drive vehicle that mounts the horizontally-opposed 4-cylinder engine behind a bathtub shaped body, with the transmission and a transfer gear mounted towards the front. The Kubelwagen had already proved that a rear wheel drive provides adequate drive force on land, but on an amphibious vehicle there was a different reason for shifting to four wheel drive transfer gears; the front wheels had to be driven in order to pull the car out of the water onto land.

Being an amphibious vehicle, overall it was heavy and harder to control, but it also served as a trainer to teach driving skill. The mechanism was complex but was designed to be easy to manufacture, which helped the Schwimmwagen to become the most mass-produced amphibious vehicle during all of World War II.