The RX-VISION GT3 CONCEPT, Mazda’s dream rotary engine race machine, is finally coming to Gran Turismo Sport on Friday, May 22, in conjunction with the company's centennial anniversary this year (Mazda was founded in Japan on January 20, 1920).

The MAZDA RX-VISION is a concept car introduced at the Tokyo Motor Show 2015. Based on Mazda’s "Kodo - Soul of Motion" design theme, it was created as a challenge to design the most beautiful FR sports car that Mazda could come up with. This car is also powered by the next generation rotary engine "SKYACTIV-R." a dream that Mazda wants to bring to life in the future.

Prizes
Prizes will be distributed to players placing from 1st to 3rd place on the global leader board at the end of the entry period. A special commemorative item will also be offered by Mazda.

This livery design contest will be judged by the Mazda Design Team that worked on the MAZDA RX-VISION GT3 CONCEPT. Acquire the RX-VISION GT3 CONCEPT in Gran Turismo Sport, and decorate the car with your own livery commemorating the 100th anniversary of Mazda. The contest takes place from Friday, May 22 to Friday, June 19.

After you complete your livery, use the "Share" feature in the game to post the design, then use the Gran Turismo Sport Community social post to share it on Twitter (use hashtag #rxvcontest). This will complete your submission to the Mazda 100th Anniversary RX-VISION GT3 CONCEPT Livery Design Contest. 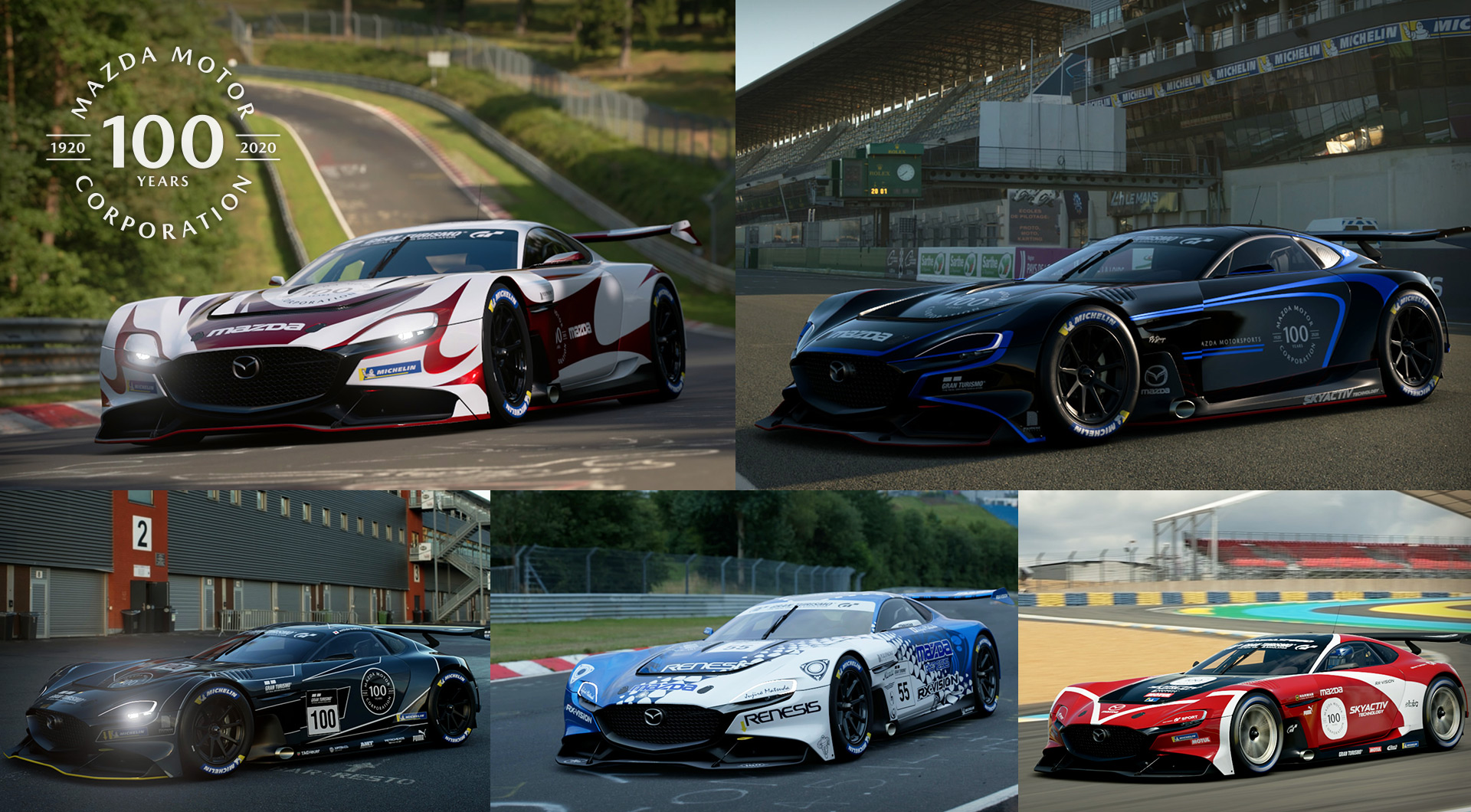 3. Select [New Design] in the Livery Editor, and start creating the livery for the MAZDA RX-VISION GT3 CONCEPT using the car you acquired in Step 1. For more details on how to create car liveries, please refer to the online manual of Gran Turismo Sport. Submissions to this contest also require the use of the Michelin tyre decals. Please do not modify the Michelin decals otherwise your entry will be void.

7. Place the "Mazda 100th Anniversary" logo decal on the MAZDA RX-VISION GT3 CONCEPT body. The location of the decal is up to you.

ABOUT LIVERY SUBMISSIONS
- In order to prevent the infringement of copyrights and commercial rights of third parties, as well as other related laws and regulations, User Decals falling within the below categories are prohibited:
・Logos of other companies
・Decals saved from designs shared by other users
・Modified decals designed by a third party
・Decals based on anime and other caricatures

Both events are unique opportunities to feel and share the spirit of Mazda’s motorsports and design and to celebrate the company's 100th year. We invite everyone to take on this challenge!