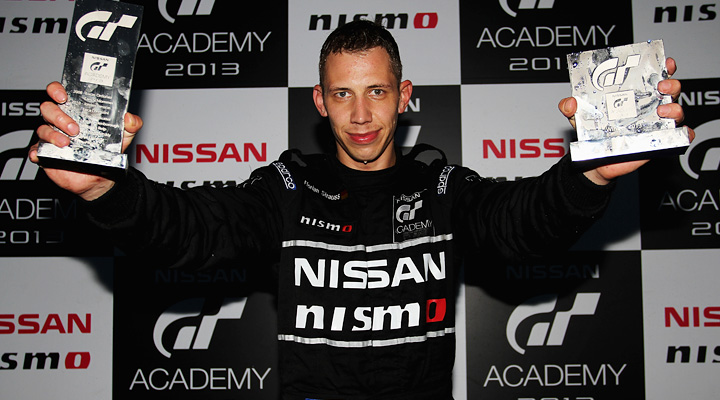 GT Academy Germany 2013 began in July with a four week online qualifying stage attracting over 99,000 PlayStation®3 gamers to enter the competition on a downloadable demo of Gran Turismo®6. The top 16 went through to the National Final event at the EuroSpeedway Lausitz, giving them a chance to show off their skills in real life to the GT Academy team.

Meanwhile, ‘Wildcard’ Live Events took place in July and August at the NISMO Shop at Nürburgring Ring Boulevard and Autozentrum Walter Pforzheim Nord, allowing those with no access to PS3™ at home to take part in GT Academy. From these events, the eight fastest gamers bypassed the online qualifying and won a wildcard spot at the German National Final.

The National Final involved Gran Turismo® gaming challenges, fitness and a car control test to assess each competitor’s natural talent behind the wheel. The top 12 performers won a coveted spot at a week-long Race Camp in September 2013, based at Silverstone Circuit in the UK. 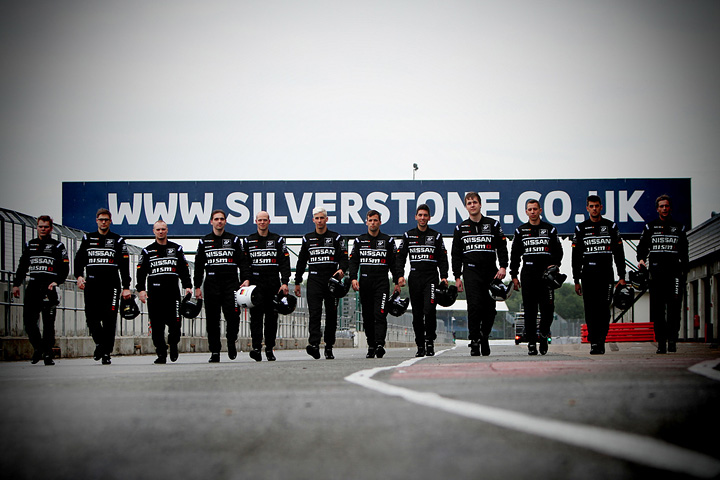 The 12 competitors were greeted at Silverstone by former Formula One® driver, Nick Heidfeld, who returned to GT Academy Germany to reprise his role as head judge. Throughout the week he had the tough job of eliminating the weakest contestants and ending their dream of winning the ultimate prize – an intensive Driver Development Program followed by driving for Nissan in a GT3 championship in 2014.

Race Camp 2013 included the usual activities, such as benchmark tests and completing written and practical assessments to gain their ARDS racing license. The gamers also enjoyed the chance to drive a range of Nissan cars, including the Juke, 370Z and the powerful GT-R. 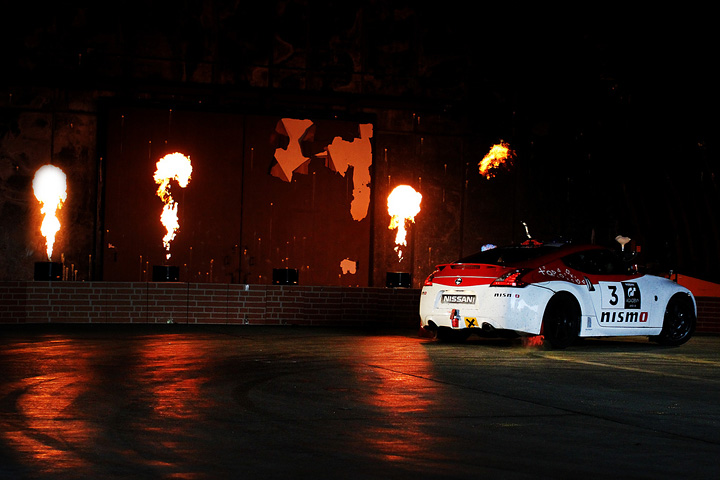 Not all challenges took place at Silverstone, so one day the gamers found themselves at a former military airbase on a course that looked like something out of a film set. The task involved driving in and out of aircraft hangars while completing various challenges to test their car control and their focus. Unfortunately, Marcel showed how easy it can be to make a costly mistake and crashed! The hangars were built to withstand bomb explosions, so the poor Nissan 370Z suffered serious damage. Luckily, and most importantly, no one was injured in the accident.

The contestants faced another stiff challenge with the GT Academy Pentathlon. A run from Race Camp HQ to Whittlebury Hall a few miles away was only the start. Once there, they had a quad bike race, then hopped onto hovercrafts before jumping into a cold pond. After each activity, the slowest competitor dropped out, leaving only four to cycle back to Silverstone. Back at Race Camp, three Nissan GT-Rs awaited their arrival. After three laps in the GT-R, Kevin was the Pentathlon winner. 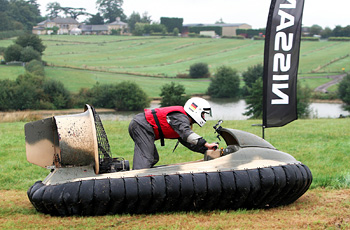 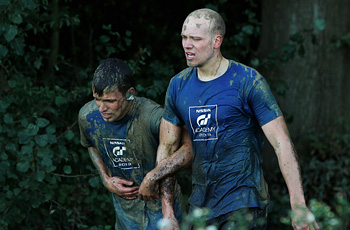 On the morning of the cross-country assault course the six remaining finalists were rudely awoken at 7am by their military-style fitness team and driven to a secret location. It was cold and it had rained all night so the ground was very muddy and slippery. They were split into two teams of three, as it wasn’t just fitness being assessed but team work too. Maverick had pulled a hamstring in a previous challenge and had difficulties walking, but his team stuck with him and they pushed each other on, winning the first round. The injured Maverick then headed back to Silverstone while the others had to keep going. The good news was that everyone was rewarded afterwards with breakfast and a hot shower! 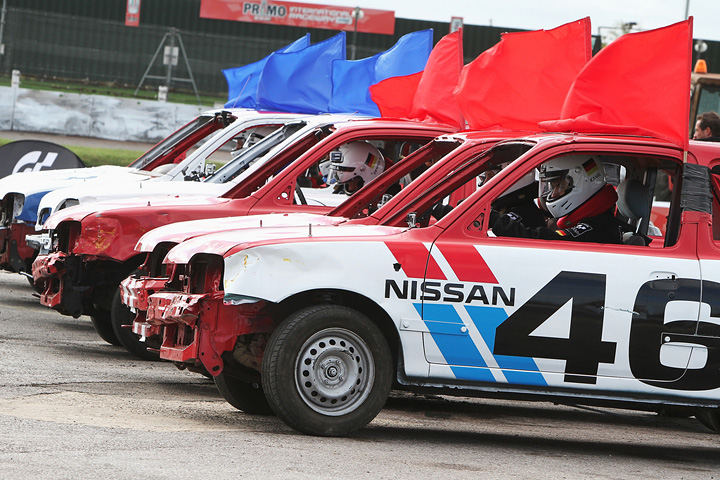 A new round for 2013 was the Nissan Micra stock car challenge. This was good fun for the competitors and allowed the judges to see how the guys raced when they had the opportunity to be aggressive and make passing moves. Florian took pole, but a reverse-order qualifying grid meant he started from the back. Undeterred, Florian made it up to second place, while Dennis G celebrated his 26th birthday with a win after starting third. 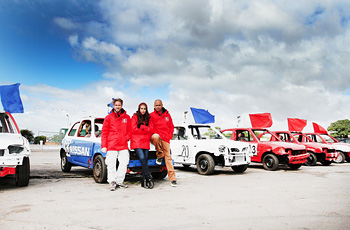 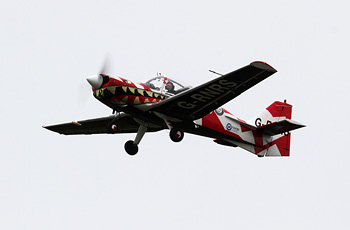 The final day began with the remaining five contestants taking to the skies in light aircraft to experience the kind of G-force they’ll feel in a top-flight racing car. Then it was back down to serious business – after one last elimination the final four were Dennis G, Florian S, Kamil and Maverick.

Their final race was in a Nissan 370Z NISMO in race-trim, with roll cages and no electric aids – unlike any car they’d driven before. Rain came down heavily just before the lights went out, meaning the track was extremely wet and slippery. Dennis was on pole, more than a second faster than Florian in second, with Kamil in third and Maverick in fourth. 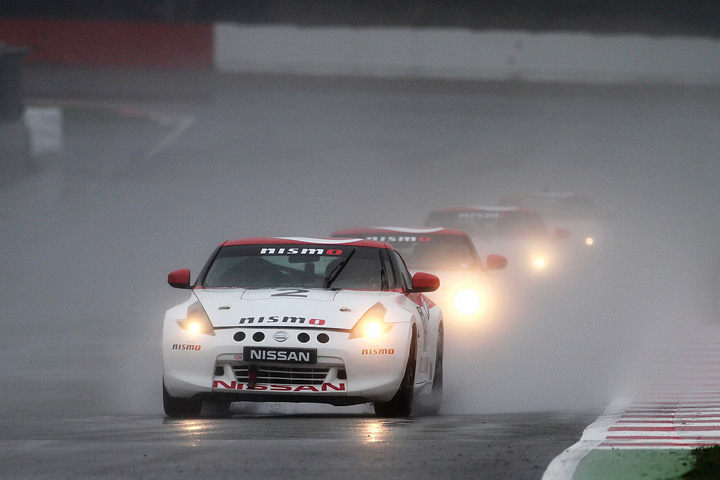 The race was five laps long, in tricky racing conditions due to the heavy rain. Florian took the lead going into the first corner and then extended it – going two seconds faster per lap than everyone else. He took the race and the 2013 crown, impressing Nick Heidfeld and the judging team with the gap he’d pulled out over everyone else. “It is absolutely unbelievable, a dream come true,” Florian said after being announced as the Champion of GT Academy Germany 2013. “I cannot wait to start with the GT Academy Driver Development Program now and I am looking forward to what will happen in the next few months.”

Florian’s identity was kept under wraps until Germany’s GT Academy TV program was aired. The show was broadcast on RTL as part of the Formula One® coverage, and the winner was kept secret until the final episode was shown in late 2013. 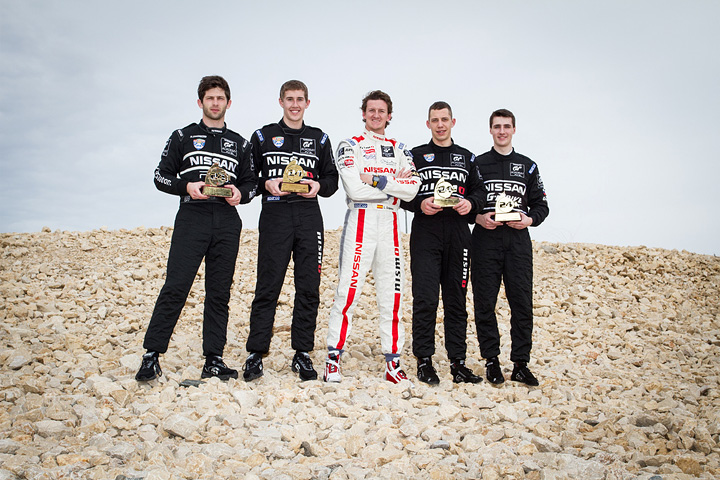 After three months of training in the Driver Development Program, Florian earned his international racing license and scored an impressive class win in his first international race at the Dubai 24 Hours in January 2014. The rest of the 2014 season sees Florian racing in the Blancpain Endurance Series as one of Nissan’s talented NISMO Athletes.